Speakers, speakers everywhere! We experienced the wildest, most-ambitious design at the show, and a high-end stalwart introduced more affordable models. And, oh, a Danish brand demonstrated its best loudspeaker yet . . . 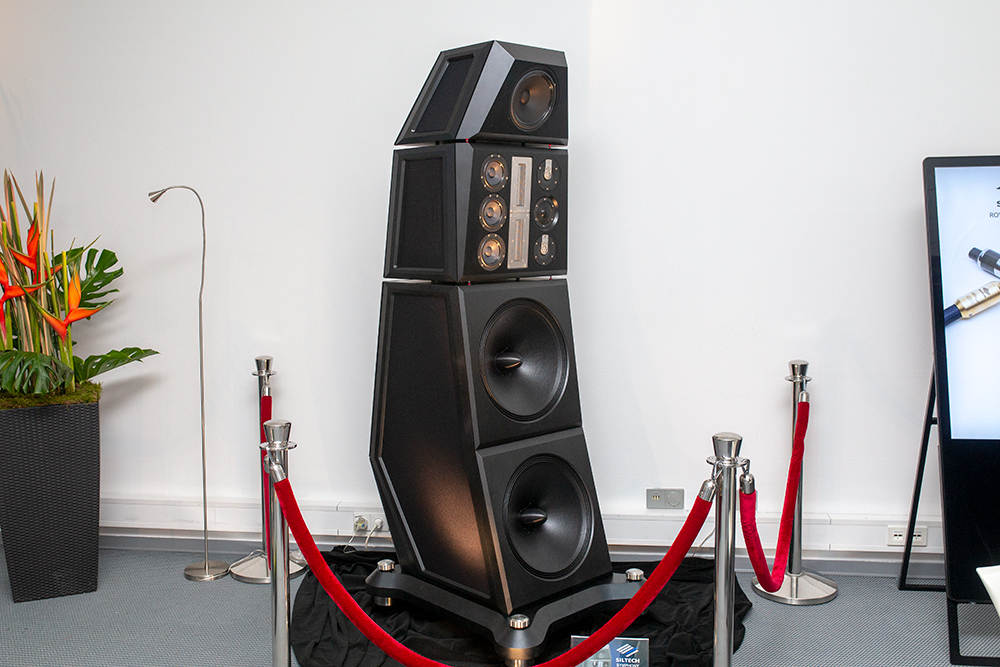 The Siltech Symphony, still in prototype form, is a five-way floorstander that incorporates no fewer than 13 drivers. The enclosure is constructed of multi-layered aluminum, with the full loudspeaker weighing 550 pounds. The Symphony comprises three cabinets, each isolated from one another by 10mm rubies -- the second best material for that job, according to . . . 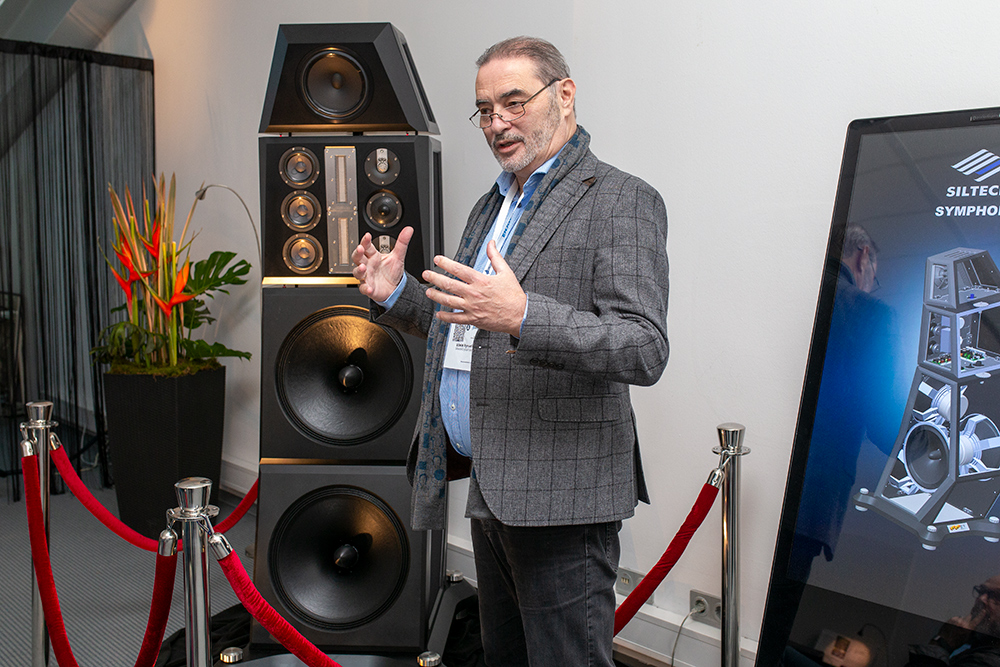 . . . designer Edwin Rijnveld (the best would be diamonds, which are cost prohibitive, obviously). The top cabinet is open to the rear and functions like a dipole -- and with the listener’s choice of tweeter type: the Symphony allows the owner to switch between ribbons and domes. The bottom cabinet houses four 18" woofers for bass down to 17Hz. The Symphony is said to be completely active, with amplifiers built in for each driver set -- though, uniquely, amplifier connections exist for an external power amp to effectively drive the crossover (the Symphony’s internal amplifiers are said to provide no gain, only current). Although the Symphony will operate with as few as 20W, it will reportedly handle 3000W! Price is expected to be north of €400,000/pair when it comes to market later this year. 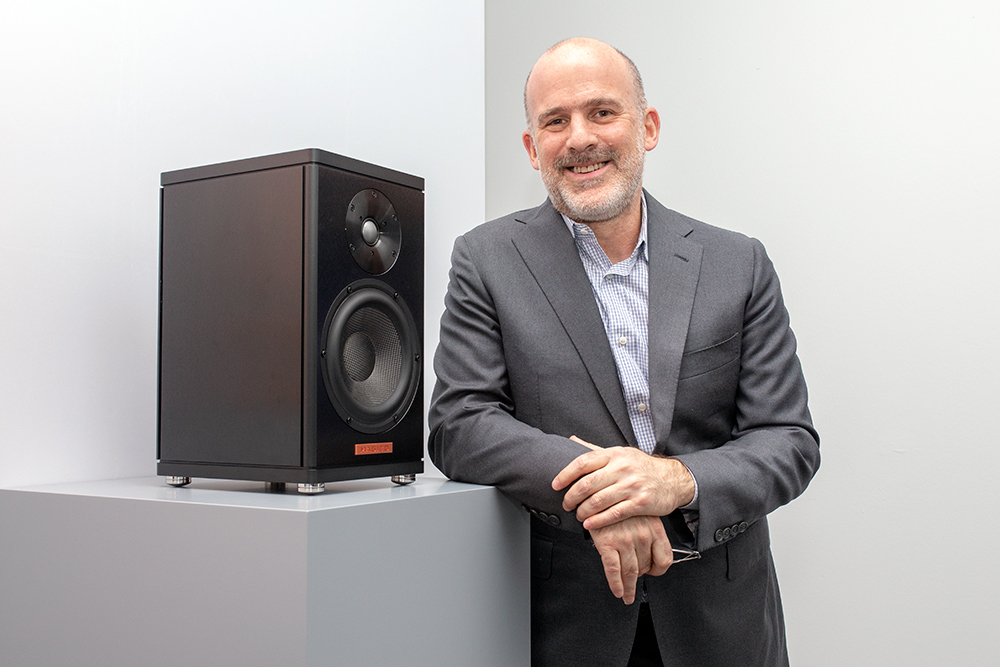 Magico has expanded its A-series speakers by a whopping three models -- a fact that Mr. Magico himself, Alon Wolf, is obviously proud of. The newest stereo speaker is the A1, essentially a bookshelf version of the wildly popular A3 floorstander. The two-way A1 is a standmounted speaker with a 1.1" beryllium tweeter and a 6.5" graphene-coated midrange-woofer. The price is $7400 per pair. 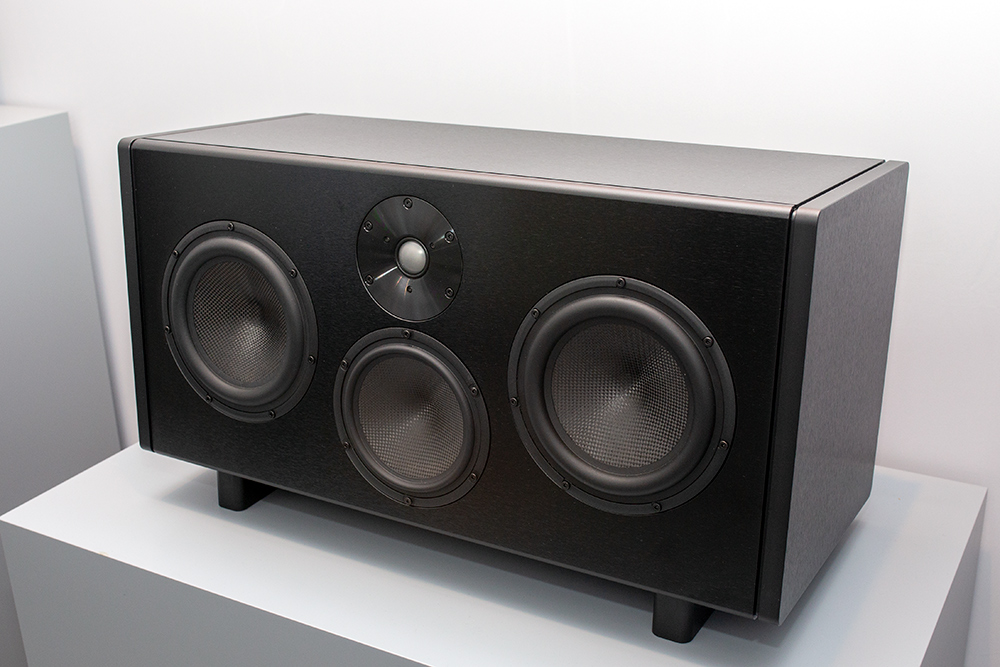 The Magico ACC center-channel speaker is a full three-way design with a pair of 7" woofers flanking a vertically aligned 1.1" beryllium-dome tweeter and 6" midrange. The large ACC should provide almost full-range sound, always a major plus for a center speaker. The ACC is priced at $6800. 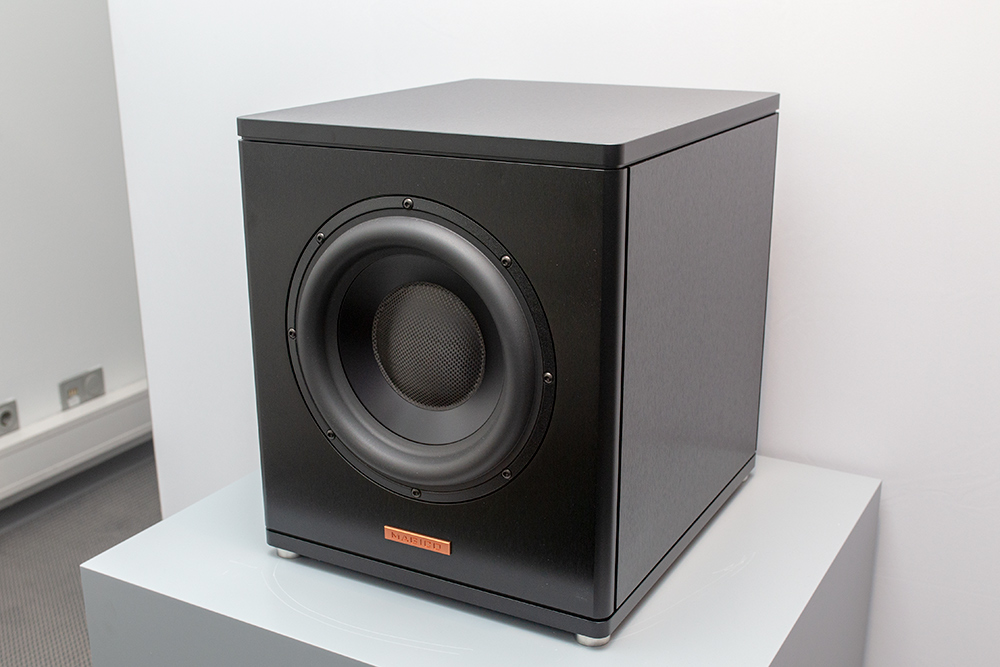 Filling out the Magico A range is the ASub, a powered subwoofer with a 10" driver mated to a 500W amplifier. The enclosure is similar to that of the other A-series speakers -- aluminum panels braced internally with more aluminum, for a very solid cabinet -- which is to say they’re similar in construction to the Magico Q-series speakers, which preceded the A line. The price is $6500. 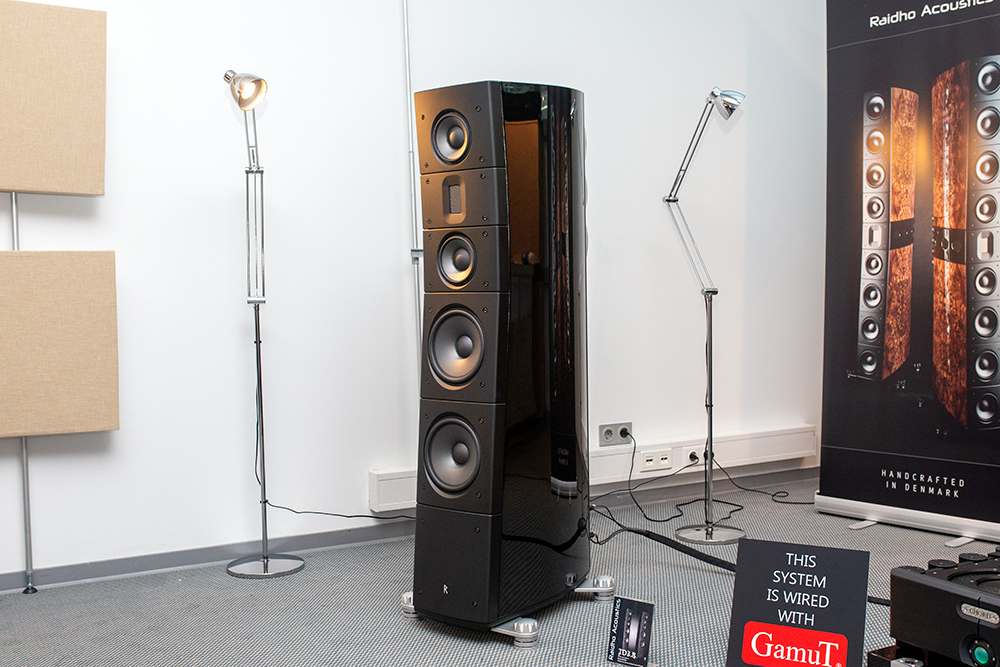 Raidho Acoustics launched the TD3.8 at High End 2019. It’s a departure design-wise for the company, which describes it as “a midsized floorstanding speaker with big drivers.” The twin 8" woofers on the lower portion of the cabinet are new designs, as are the 5" midranges that sandwich the . . . 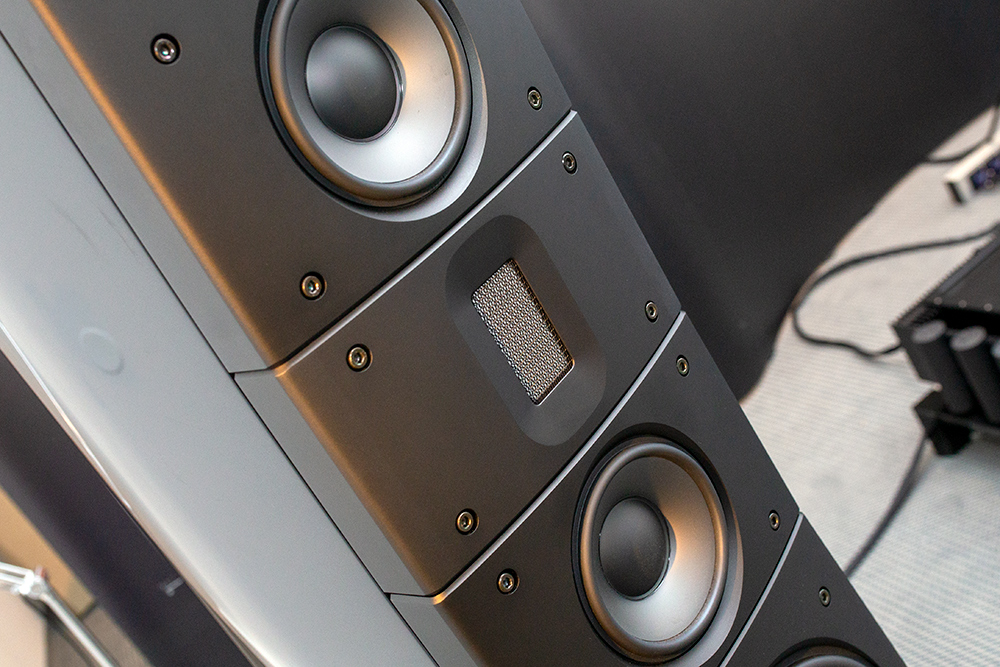 . . . ribbon tweeter between them. Sensitivity is increased to 91dB and, according to the company, distortion is lower by a whopping 35dB. From what we heard in Munich, this is certainly the best Raidho yet. Price is €88,000 per pair in gloss black. 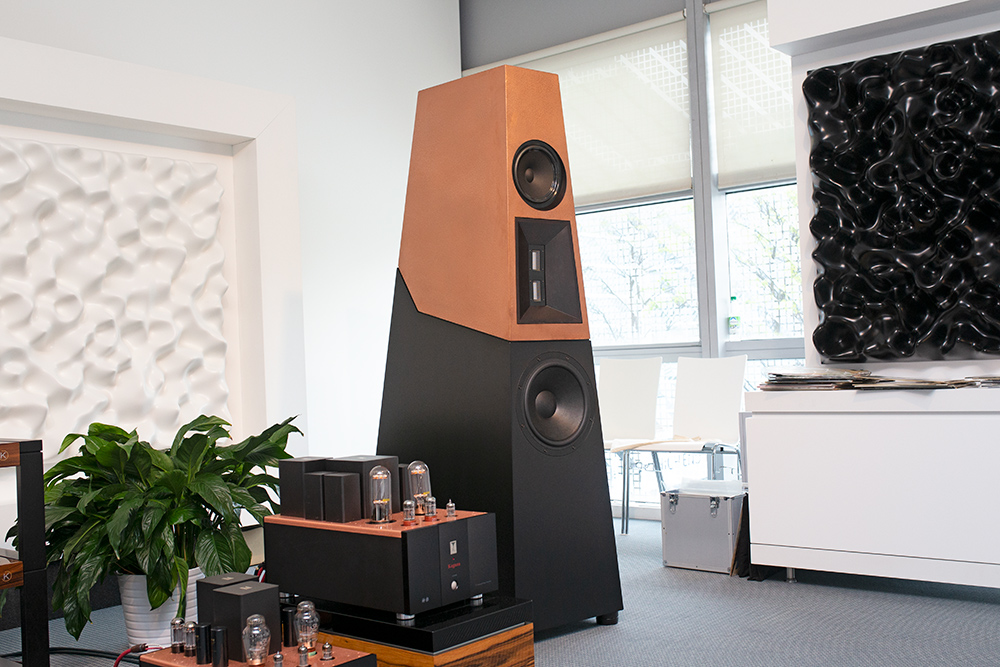 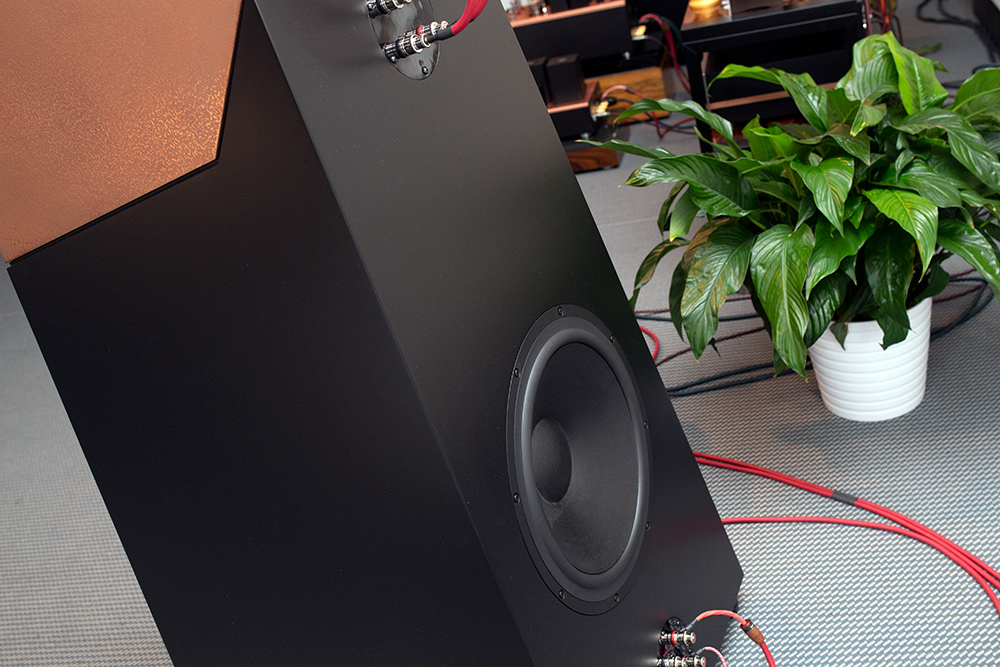 . . . 15" Audiotechnology subwoofer on the rear, vented through a down-firing port. Around front is a 12" Audiotechnology woofer in a sealed chamber, along with an 8" Scan-Speak Ellipticor midwoofer. The highs are handled by . . . 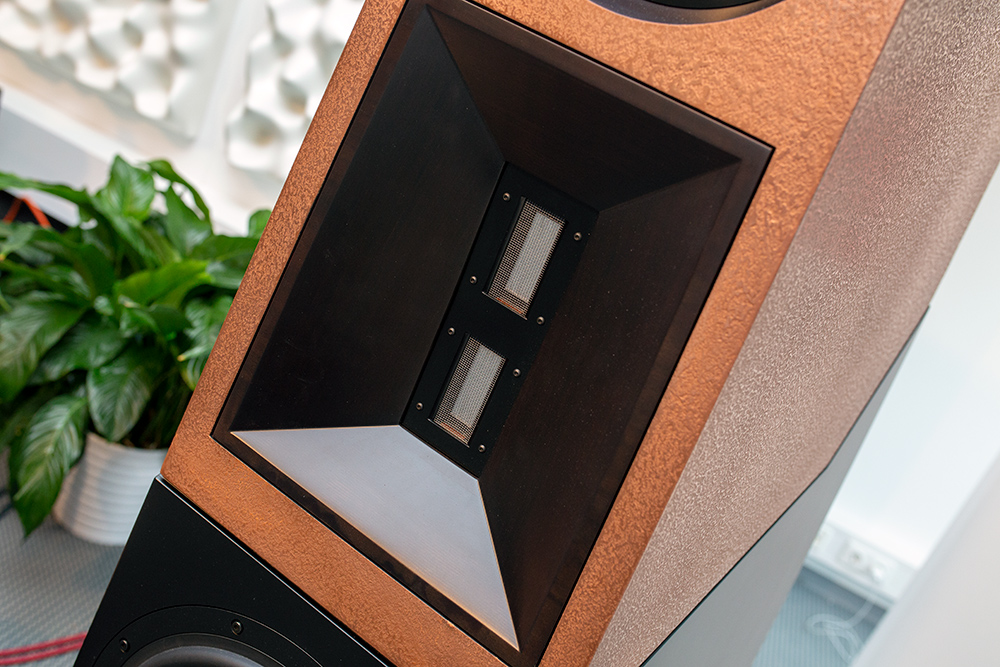 . . . double RAAL ribbon tweeters. The four-way Grande is wired internally with Duelund cable, while the crossover components are all Duelund cast parts except the woofer coil, which is from Jantzen. The Grande, which is copper-clad on the top portion, weighs 627 pounds and retails for €222,222 per pair.