In the online hi-fi world, I noticed a new and welcome trend. Instead of companies waiting until High End actually starts to announce new products that would be shown there, as most did in previous years, many companies announced them days or even weeks in advance to start getting word out. They either e-mailed the information out to group lists or posted it on social media (usually Facebook) as a story or a link to their website. Since I’m online almost all the time, these early releases helped me get my initial coverage up more quickly. Here’s the first batch of hi-fi electronics, with all prices in euros (€) or US dollars ($). 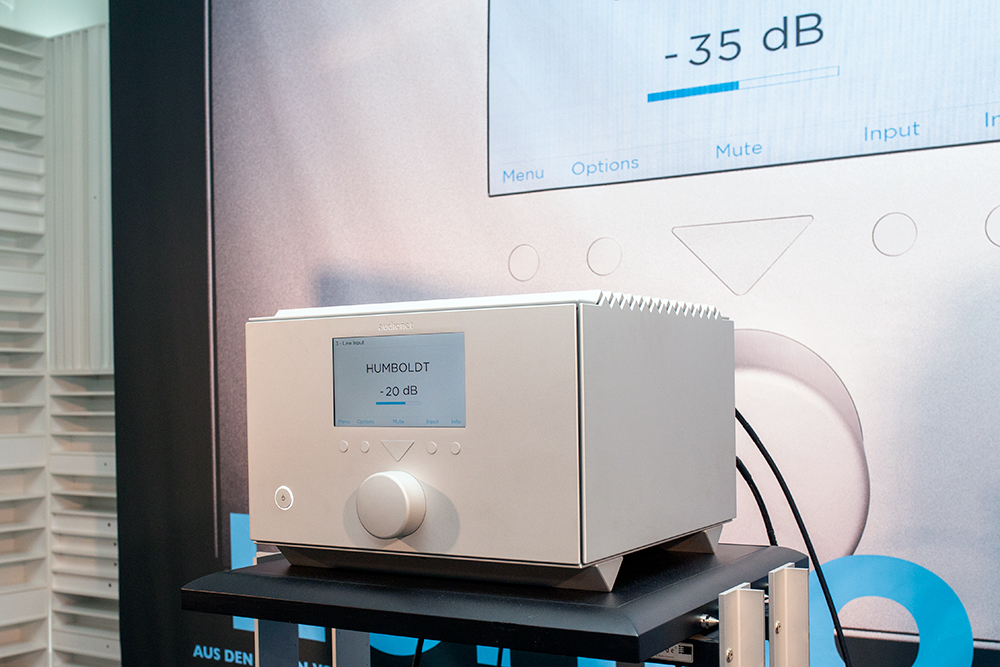 Germany’s Audionet introduced one of the biggest and most expensive integrated amps I’ve ever seen -- it’s called Humboldt, priced at €42,000. Humboldt measures 12.6"H x 17.7"W x 19.9"D, weighs 134 pounds, and is wrapped in an anodized-aluminum case in your choice of silver or black. Claimed power output isn’t as high as you might think for an integrated amplifier of this size and weight, mind you -- 250Wpc into 8 ohms or 380Wpc into 4 ohms -- but that’s still more than enough juice to power most loudspeakers. 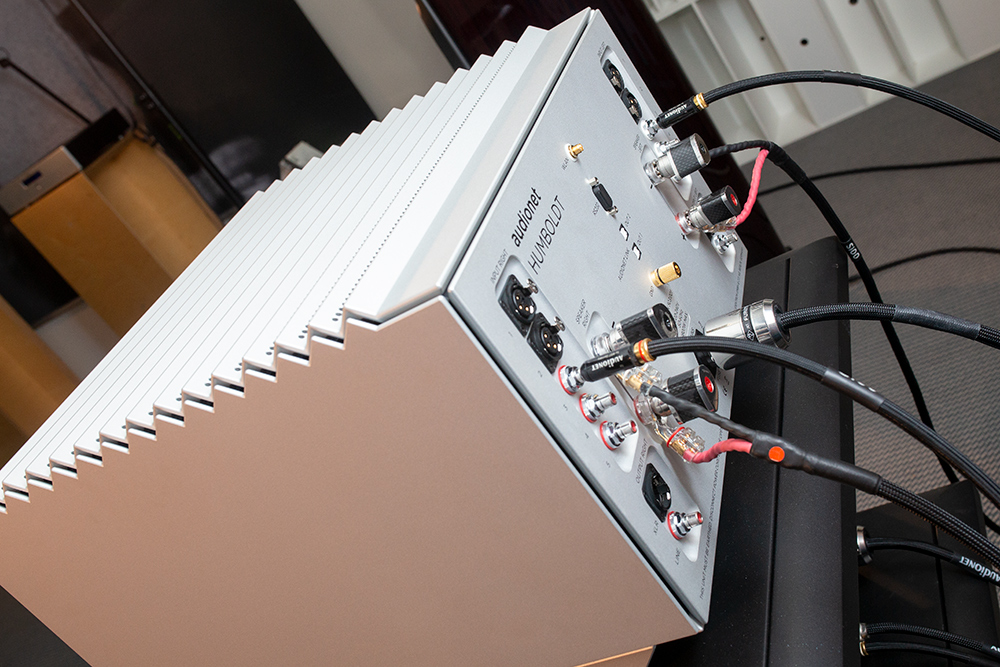 The Humboldt offers four pairs of single-ended (RCA) inputs and two pairs of balanced (XLR) inputs. According to Audionet’s literature, the Humboldt is a DC-coupled design “with no sound diminishing capacitors or coils,” and it uses the “shortest signal paths.” It also has “power supplies for positive and negative power currents, separate for input and driver stage and power stage” -- so four in total, from what I could glean. And while Audionet’s three other integrated amplifiers have display screens, this one has a DISPLAY screen -- it’s big but also useful. The company says that the entire unit is microprocessor controlled “with separate power supply monitor and control of all functions, informing the user on a high-resolution display.” You can also name the inputs any way you want, so they’ll look a little more appealing on that big display. Also interesting is the large volume control, which Audionet says is “on a double ball-bearing axis and with magnetic ratchet and optical sensing.” All in all, the Humboldt is an interesting design that we hope to learn more about. 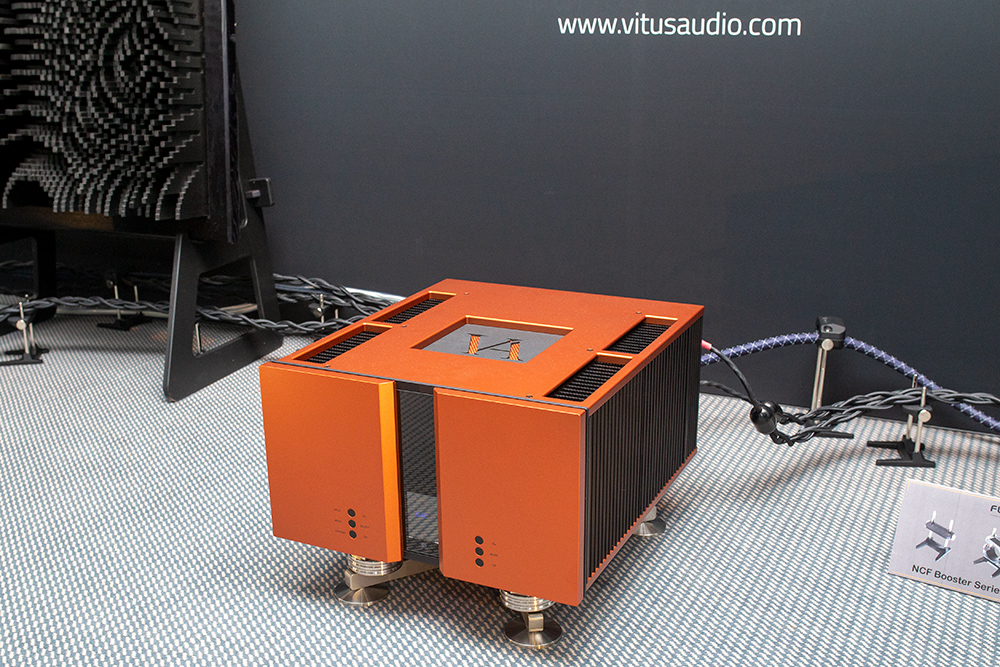 Vitus Audio, from Denmark, also introduced a new statement-caliber integrated at High End. The SIA-030 retails for €35,000 and comes with expansion slots on its backside for an optional DAC-streamer and phono stage (though their prices haven’t been established yet). The SIA-030’s DAC has AES/EBU (XLR), S/PDIF (RCA), optical (TosLink), USB, and Ethernet inputs. The phono stage, which has two sets of inputs, is moving-magnet/moving-coil compatible, offering up to 70dB of gain. Two pairs of unbalanced (RCA) and three pairs of “true” balanced (XLR) analog inputs are included for the preamp section of the integrated itself. Vitus used the word “true” because the SIA-030 is a fully balanced design throughout. 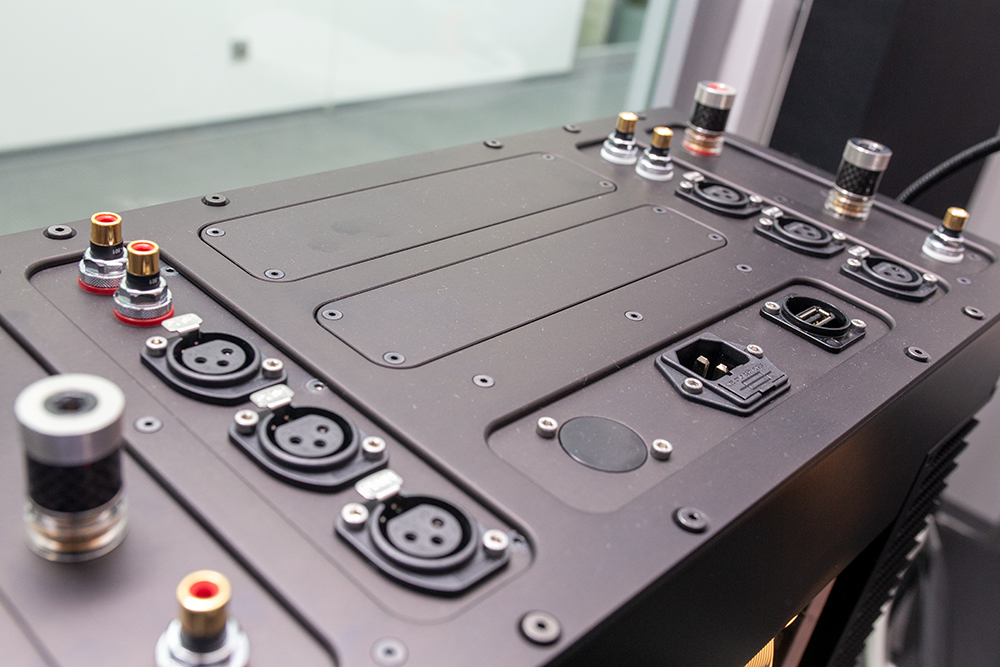 An interesting feature found on other Vitus amplifiers that’s also included on the SIA-030 is the ability to switch between class-A and class-AB operation. Class-A mode offers the purest sound but lower power: up to 30Wpc into 8 ohms. Class-AB offers up to 200Wpc into 8 ohms. Power output in either mode is said to “almost double” into a 4-ohm load. Which mode a user chooses will depend mostly on the sensitivity of his or her speakers and how loud he or she wants to play them. Last but not least, the SIA-030 comes in typical silver or black, as well as a number of striking painted finishes. 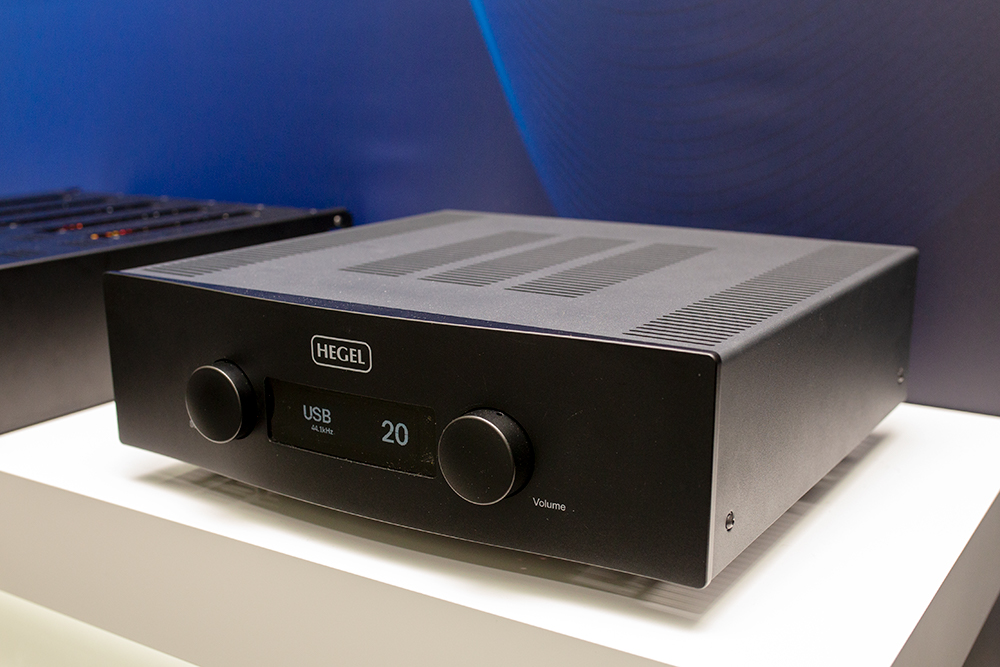 If the Humboldt and SIA-030 are too rich for your blood, Norway’s Hegel Music Systems has introduced the H390 integrated amplifier-DAC, priced at €5900, the successor to the company’s popular H360 integrated amplifier-DAC. According to the product brochure, the company nicknamed the H390 “Robin Hood” because it’s “a rebellion against the establishment of ‘forcing’ consumers into a user interface defined by the amplifier/streamer manufacturer.” It’s part of Hegel’s longstanding belief that its products’ software shouldn’t try to control all parts of the playback chain. Instead, it designs the software in all its integrated amps, including this one, to work seamlessly with a variety of commonly available music players for a better user experience. 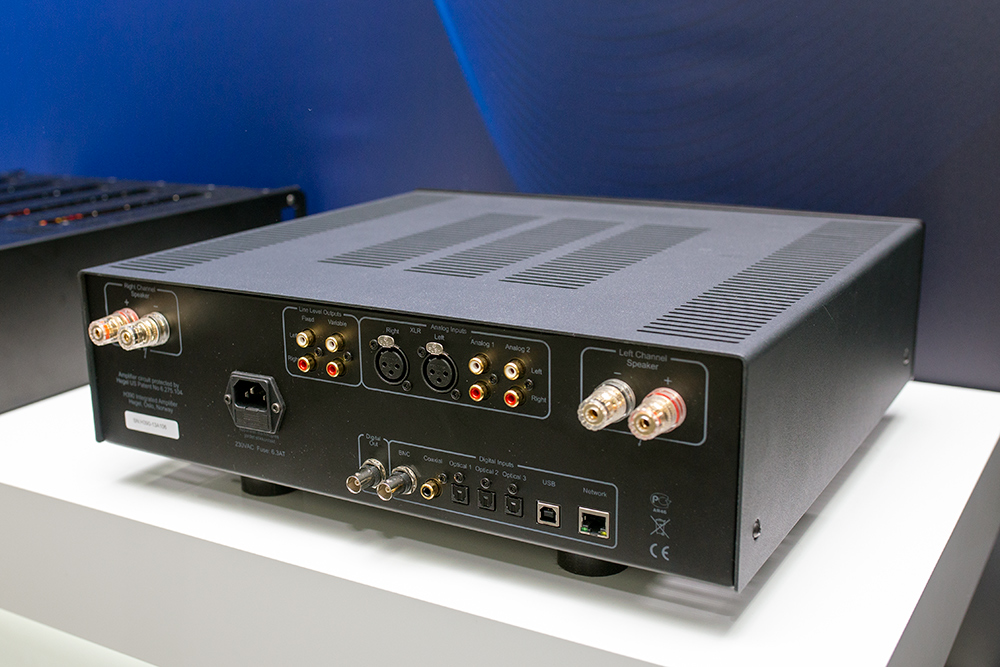 Although the H390 looks identical to the H360, its circuit design is based on the company’s flagship H590 integrated amplifier-DAC, which was released at High End 2018, so every analog and digital board in it is brand new. According to the published specifications, the H390 incorporates Hegel’s patented SoundEngine 2 amplifier technology to output up to 250Wpc into 8 ohms, with sufficient stability to drive loads as low as 2 ohms. The H390 has one set of balanced (XLR) and two sets of unbalanced (RCA) analog inputs, as well as five S/PDIF digital inputs (one coaxial BNC, one coaxial RCA, and three TosLink optical), one USB input, and one Ethernet connector. Maximum PCM resolution on the S/PDIF and Ethernet inputs is 24-bit/192kHz, and up to 32/384 on USB. Maximum DSD resolution is DSD64 on the S/PDIF inputs and DSD256 on the USB input. MQA is supported on the USB and S/PDIF inputs. Free updates that should be available after the summer include support for MQA and DSD via Ethernet, as well as Roon endpoint compatibility. 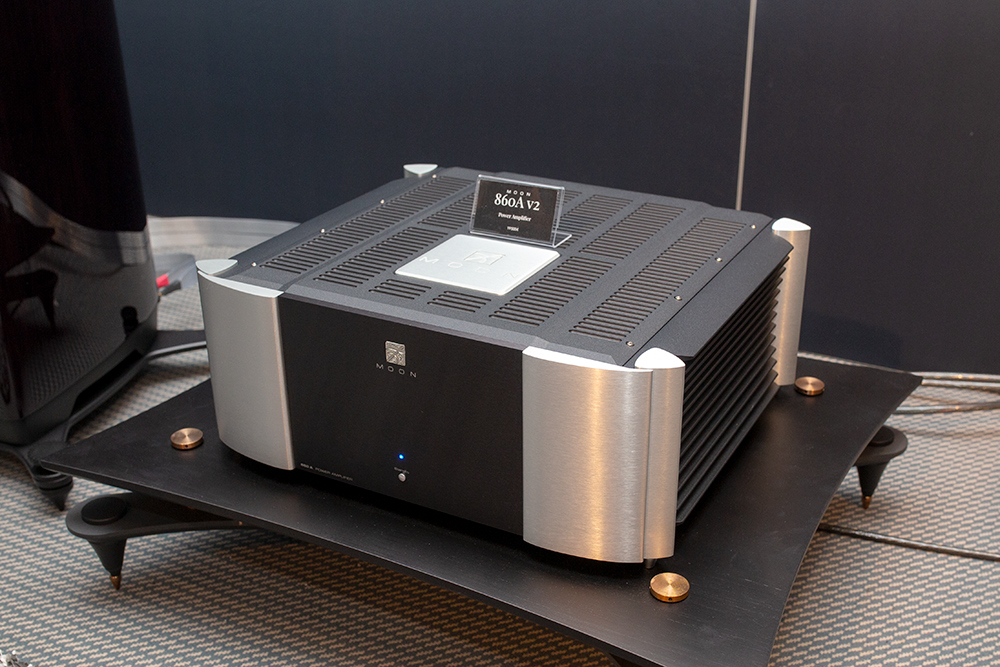 Canada’s Simaudio has not only replaced its original 860A stereo power amplifier with the 860A v2; it’s also eliminating the 870A stereo and 880M mono amplifiers from its range because the company feels this v2 upgrade is so substantial. According to Simaudio VP Costa Koulisakis, “The outside of the 860A V2 may look the same as the old one, but pretty much everything inside is new.”

Priced at €19,500, the 860A v2 is a fully balanced, dual-mono design that’s said to output at least 225Wpc into 8 ohms or 450Wpc into 4 ohms, an improvement over the original, which was rated at 200Wpc into 8 ohms or 400Wpc into 4 ohms. The 860A v2 can also be bridged to mono with a flick of a switch for up to 750W into 8 ohms. According to Sim’s literature, “The 860A v2 has new and improved circuit design at input and gain stages, new internal bias control, and a new integrated defeatable DC coupling filter allows for better pairing with preamplifiers.” The 860A v2 will be available worldwide by the end of June. 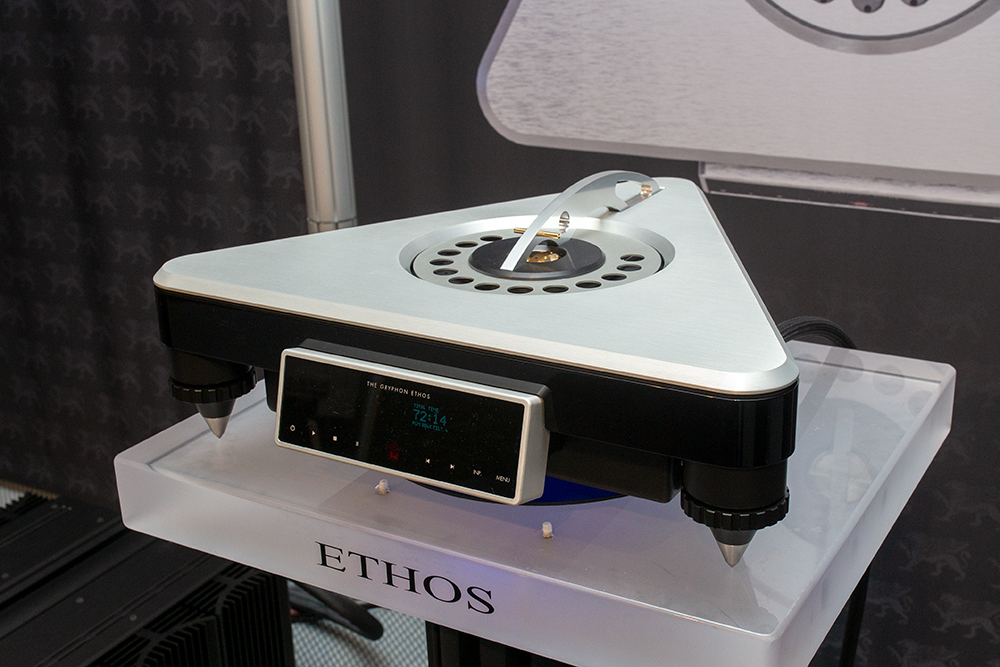 Denmark’s Gryphon Audio Designs showed its new Ethos CD player, priced at €28,000. In addition to playback of standard “Red Book” CDs via the top-mounted transport, the Ethos can be used as a DAC. It has five digital inputs (one USB, one S/PDIF BNC, and two AES/EBU XLR) and supports higher resolutions: up to 32-bit/384kHz PCM and DSD512 through the USB input, and up to 24/192 PCM through the other inputs. Ten user-selectable digital filters are available: seven for PCM, three for DSD. User-selectable asynchronous sample-rate conversion is also available for PCM files, with choices for resampling up to 384kHz PCM or DSD128. 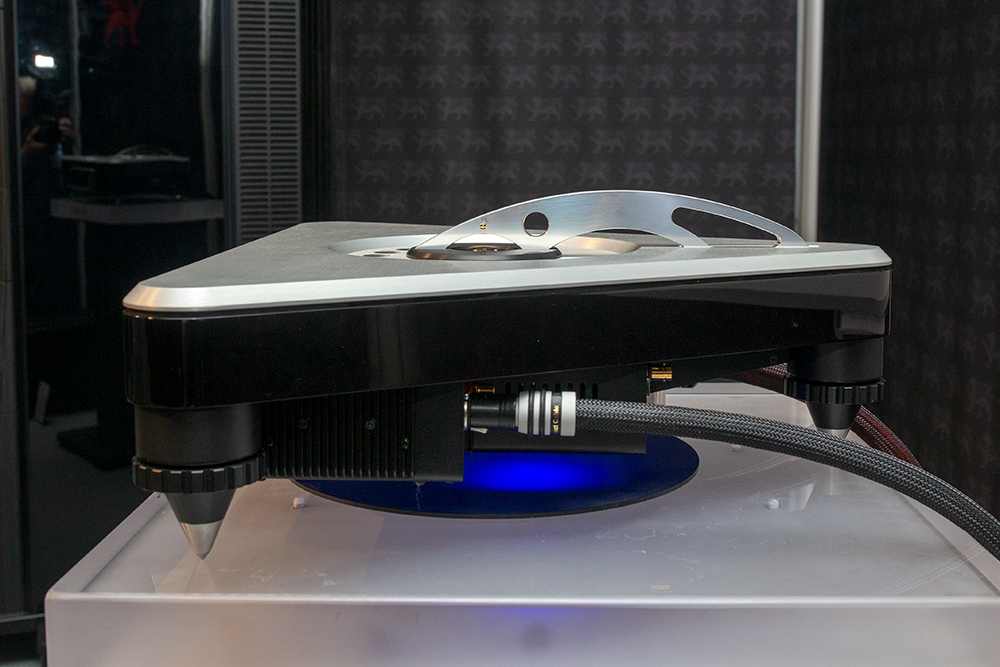 The Ethos’ striking industrial design is courtesy of the company’s recently retired founder, Flemming E. Rasmussen, while overall product development was headed by Tom Moller, its long-time chief engineer. The day the Ethos was officially announced in April, Rasmussen wrote this on Facebook: “When I left Gryphon, my farewell gift to the company was three new designs. The first is the Ethos CD Player, the other two are secretly in store for the future.” We certainly look forward to seeing the next two! 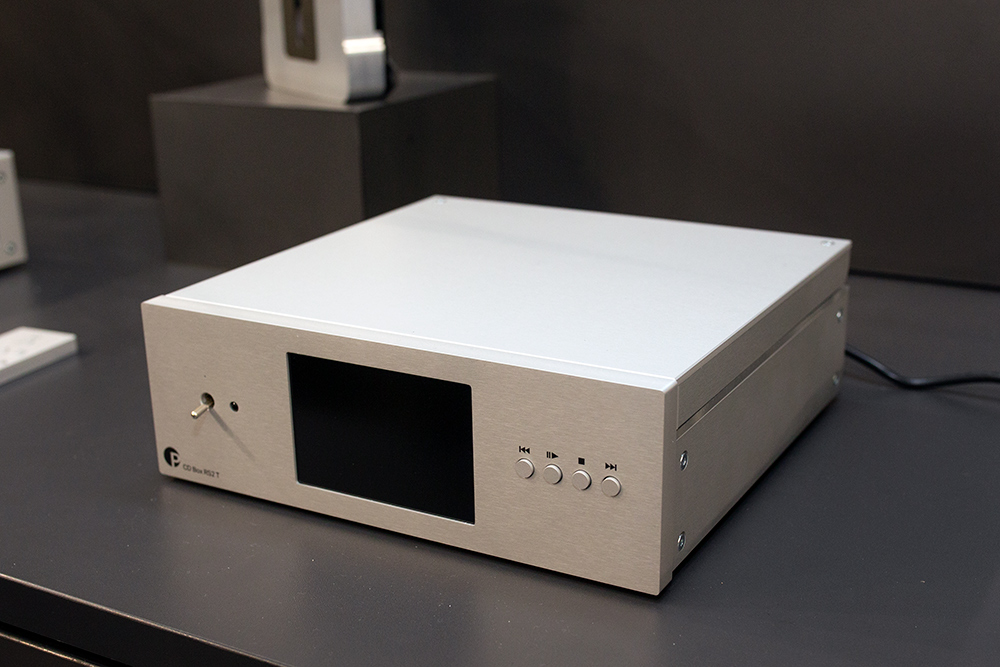 Gryphon’s not alone in thinking there’s still enough life left in the compact disc -- other companies are also developing new products for the format, and investing heavily while doing so. Enter Austria’s Pro-Ject Audio Systems and its new top-loading CD Box RS2 T transport, priced at €2499. It’s a transport, not a complete CD player, so it only spins a disc and outputs a bitstream for decoding by an outboard digital-to-analog converter. It has four digital outputs: AES/EBU (XLR), optical S/PDIF (TosLink), coaxial S/PDIF (RCA), and I2S (HDMI). 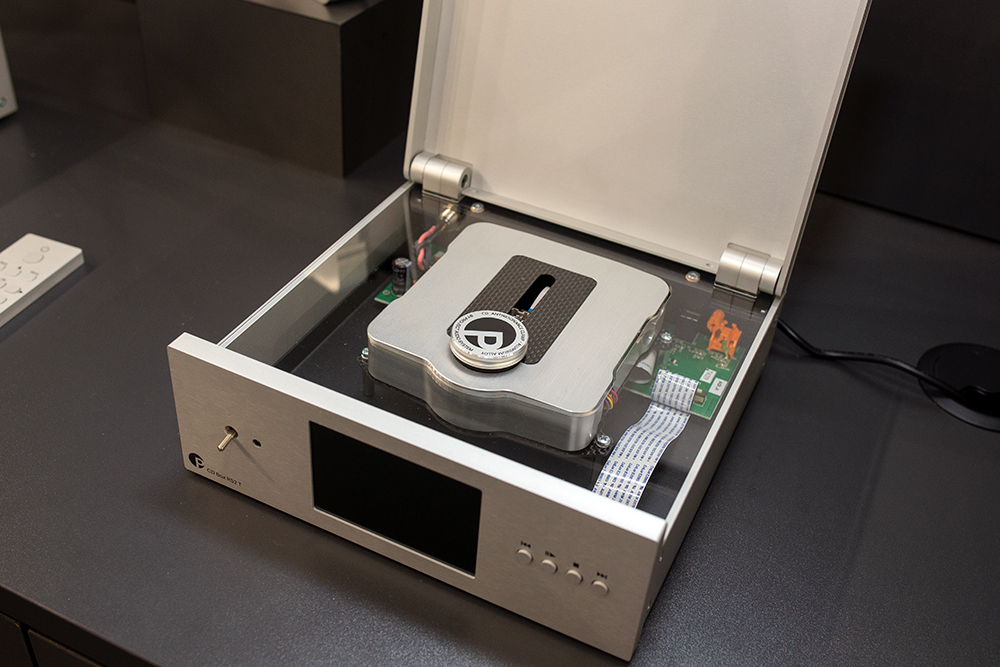 The nifty thing about the CD Box RS2 T is that the company has built its own transport mechanism from the ground up, which it called CD-Pro 8. The engineer behind the transport’s design is Michael Jirousek, who’s reported to be one of the original Philips engineers who worked on the brand’s CD drives back in the format’s heyday (Sony and Philips were the inventors of the compact disc). The drive is mounted on a suspension within the very sturdy, all-aluminum enclosure, which is available in black or silver finishes. The CD Box RS2 T certainly isn’t cheap, but there’s obviously been a spare-no-expense effort made to create it. Nice work!