Variations of the Superspeaker, Part One: MartinLogan, Estelon, and Magico

High End 2014 was a study in contrast on the superspeaker front. Vast technological differences separated the most ambitious participants, and no clearer contrasts could be found than with three of my favorite models: MartinLogan's Neolith, Estelon's Extreme, and Magico's Ultimate III. 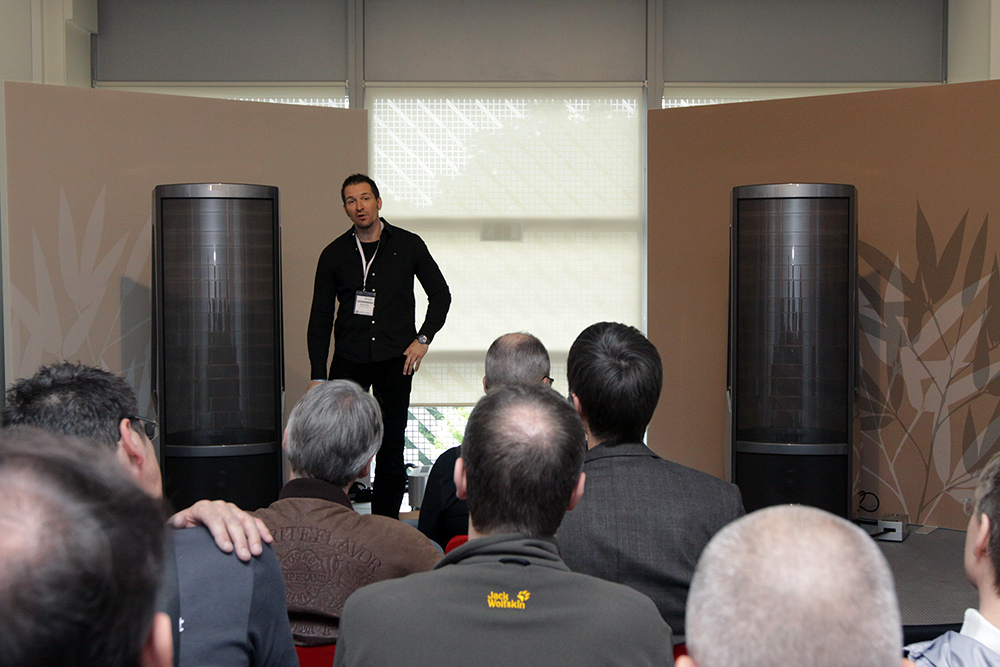 The MartinLogan Neolith (retail price expected to be under €70,000/$100,000 per pair) was impressive by any measure. I remember hearing its ancestor, the original Statement, at Stereophile's audio show in Los Angeles back in the late '90s. That speaker shook the foundations of the large hotel that it was played in, displaying absolutely none of the dynamic limitations that can be a tradeoff with electrostatic designs. When you consider that the Neolith's electrostatic panel has 35 percent more radiating surface (22" x 48") than the Statement E2's, you can begin to understand just how much headroom lies within this new MartinLogan flagship. The bass-driver arrangement is no less ambitious, comprising a 12" carbon-fiber, front-firing midwoofer, and a rear-firing 15" aluminum-cone subwoofer, ensuring that the Neolith is equally capable throughout the entire frequency range. The cabinet is constructed from a composite material that the company promises will offer a low resonant signature. Listening to the Neolith revealed the immediacy that electrostatics are known for, but on a scale that clearly surpasses the smaller MartinLogan designs. There was great clarity and speed in the crucial midband that translated to an exciting listening experience, along with bass power clearly in the super-subwoofer range. MartinLogan fans everywhere should rejoice -- you now have a very capable flagship. 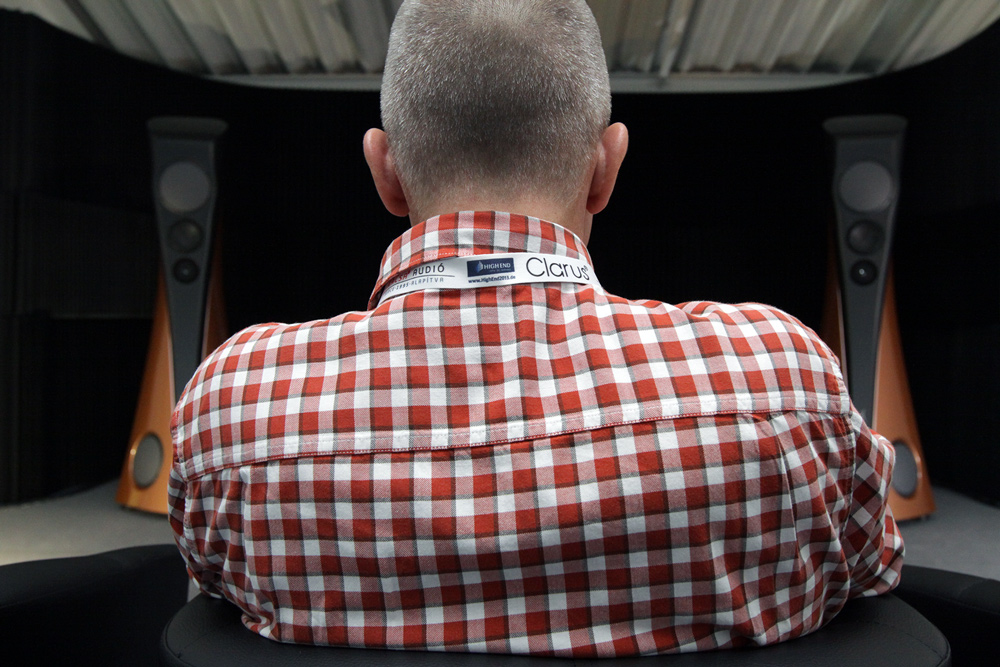 Estelon's Extreme (€170,000/pr.) incorporates some of today's latest drive-unit technology in what many would describe on first glance as an otherwise conventional dynamic-driver design. At more than 500 pounds per side, and incorporating a pair of 10" aluminum woofers, a 10" aluminum midwoofer, and a 7" ceramic midrange, along with a 1.5" diamond tweeter -- all designed in conjunction with Accuton -- the Extreme is capable of filling even the largest of rooms with high-end sound. Far from conventional, though, the Extreme is adaptable to varying room conditions in a wholly logical way. The marble-based, two-piece cabinet was elegant and striking at the same time, but what is most interesting is that the upper module is height-adjustable, which allows for precise tailoring of the speaker's output for a given listening position without upsetting the acoustically sensitive relationship between the three front-firing drive units. Basically, the upper module can be set (via a remote-controlled internal motor) to one of five different height positions based on the distance to the listener. In practice, this system worked like a charm, with the image height ever so slightly moving with the adjustment of each position of the upper module. The overall sound was precise, fleet of foot, pristine, and tidy. This speaker can sound very intimate, even in an environment like the M.O.C. The overall sound was extremely good. 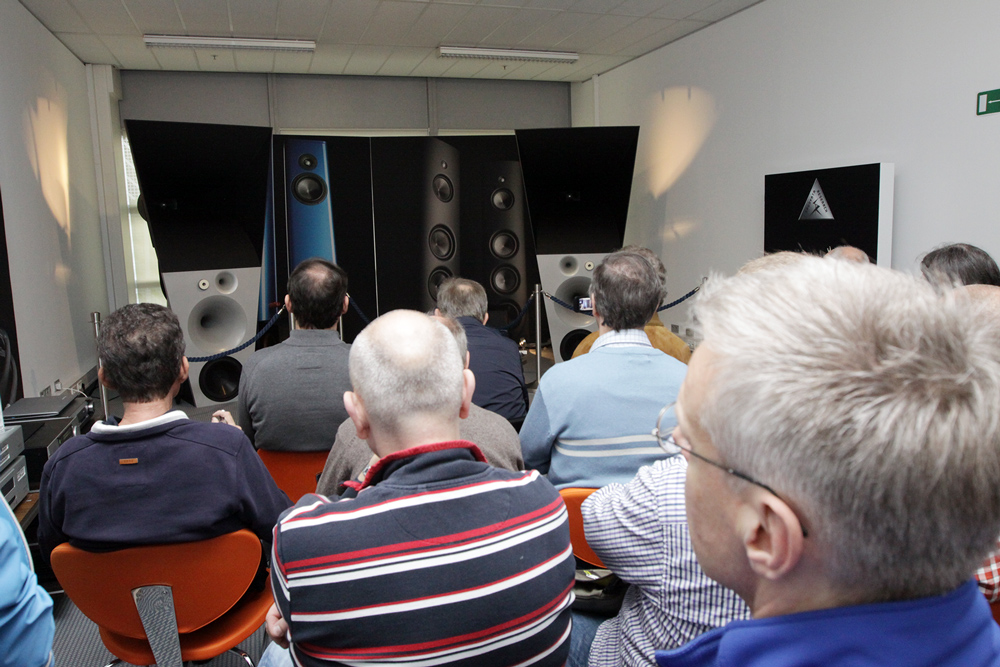 Magico's Ultimate III (approximately $600,000/pr.) was the most physically imposing product at High End 2014, and was certainly the most expensive we saw and heard. The Ultimate III is a five-driver array, four of which are horn-loaded compression drivers. The fifth drive unit is a front-firing 15" aluminum-cone subwoofer. The crossover is electronic, and an original Magico design -- therefore there are no passive components between the amplification and the drive units, which is ideal. From a dynamic-capability standpoint, the 112dB-efficient Magico stands clearly apart from everything else -- it can go from a whisper to uh-oh within the expenditure of a single watt. And that, perhaps, is what leads to the unique magic of this Magico. To say that the Ultimate III can truly soar is an understatement -- it does so literally like no loudspeaker I've ever heard. Other speakers seem to hit a wall reproducing, for example, the taiko drums, whereas by comparison the Ultimate IIIs just cruise right past the red line and keep on going. It's the first speaker I've heard that can mimic the dynamic range of real live music, no matter what that music is. The Ultimate III is also the first horn-based system that has no horn colorations -- the speaker is as neutral as you could ask for. What else is there to be said? The line outside the Magico room was about 100 people deep as I walked by on Saturday. At least many listeners now know what can be done when cost is truly no object.