The vinyl revival is real and big, so turntable sales are brisk -- but at every hi-fi show, it’s uncertain how many new turntables and related products you’ll see, and in what price ranges. I don’t know why that is -- it just happens that way. At the Florida Audio Expo 2020, however, I wasn’t expecting the diversity of vinyl-related products, as you’ll see in the coverage below. Call it a pleasant surprise. All prices are in US dollars. 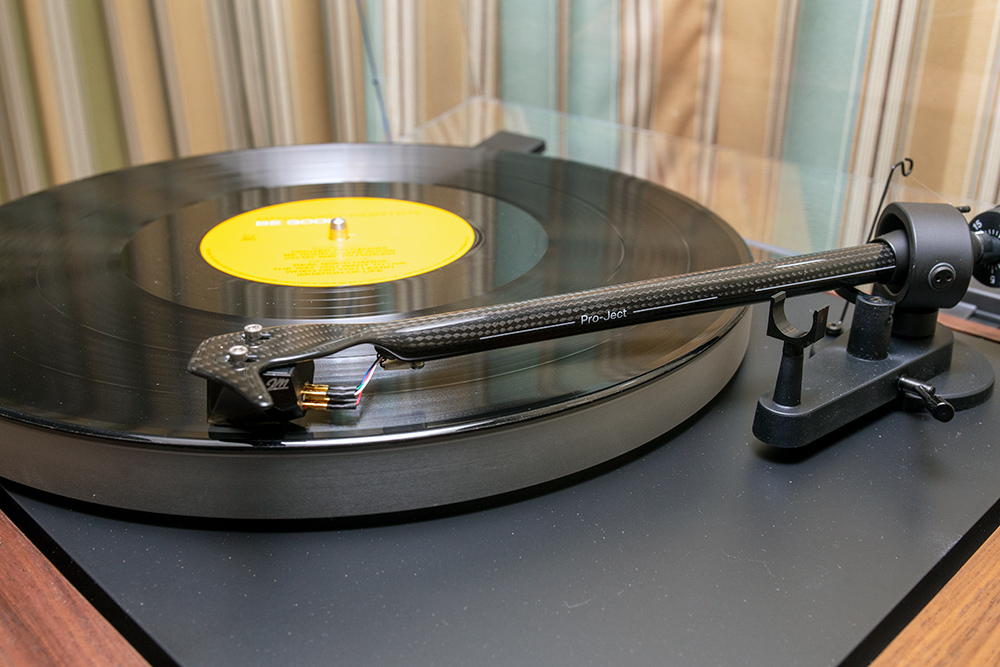 First up is Andover’s Model One Record Player, priced at $2500. It’s not only a turntable; it’s a complete music system, since it has speakers built right into it -- four 3.5" aluminum-diaphragm woofers and two air motion transformer (AMT) tweeters. Those drivers are placed such that the sound seems as if it’s coming from speakers placed farther out to the sides, which makes the listening experience more enveloping and room-filling. Care also went into the placement of the drivers so their movements would minimize vibrations transmitted to the turntable. Powering the Model-One’s speakers are 200W class-D amplifiers, which means that the Model One can play pretty loud. 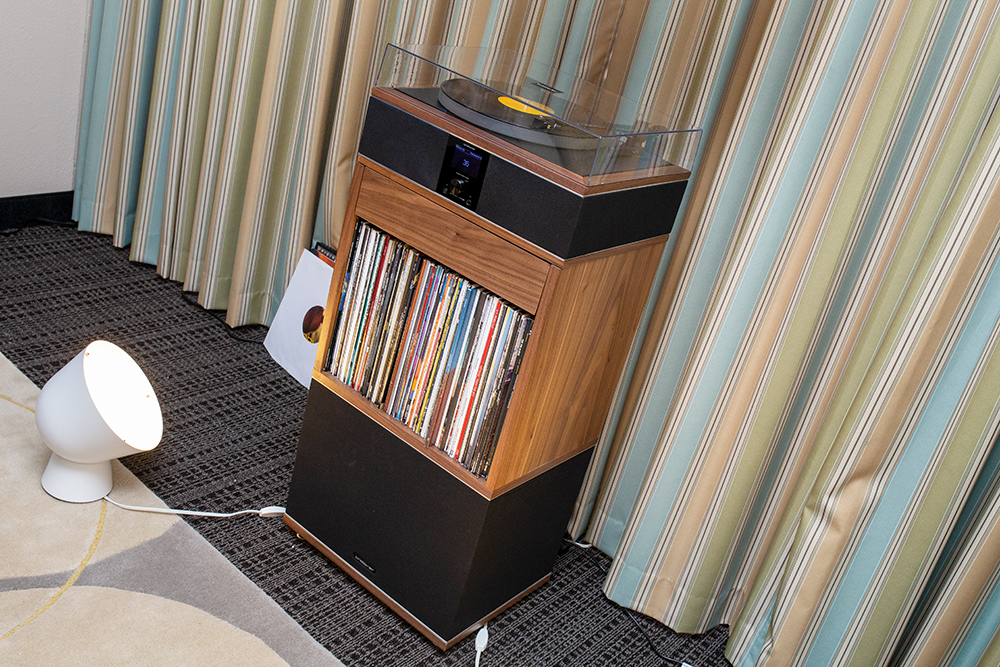 As for the details: The turntable itself is made by Pro-Ject Audio Systems -- its Debut Carbon Esprit SB, replete with a carbon-fiber tonearm, an Ortofon OM2 Silver cartridge, and an acrylic platter. The Model One also features a class-A headphone amplifier and a subwoofer output, which allows you to tether to it the optional subwoofer, priced at $800 alone -- or $3000 if you buy the turntable and subwoofer together. What’s more, there are two storage-shelf options available, one for 100 LPs, which brings the group price with subwoofer up to $3200, the other for 200, which takes the price to $3400. Audiophiles may balk at the idea of an all-in-one music system, but I’ll bet many people who yearn for the convenience of old console-type stereos will flock to the Model One for its sound and its visual appeal. 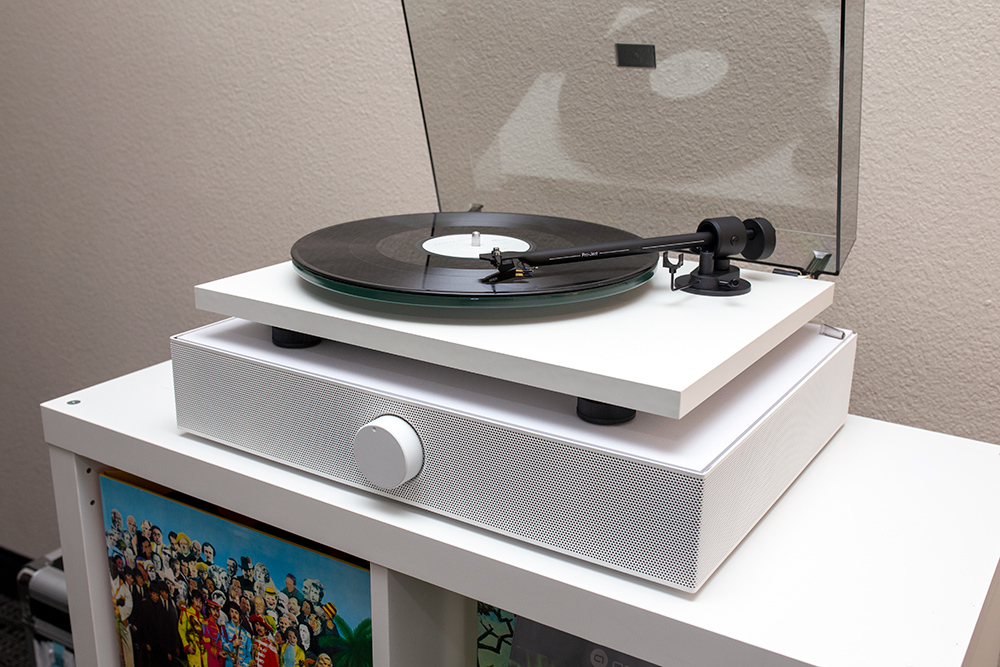 Have you ever had someone who bought an inexpensive turntable call you up and ask, “What do I need to hook this thing to?” When you tell them they now need a complete stereo system and it may cost them many hundreds or even thousands of dollars, they usually gasp and wish they hadn’t asked you in the first place. They might even return their new turntable. Andover now has a reasonably priced solution for that -- the Spinbase, which is priced at just $300 and is available in black or white. 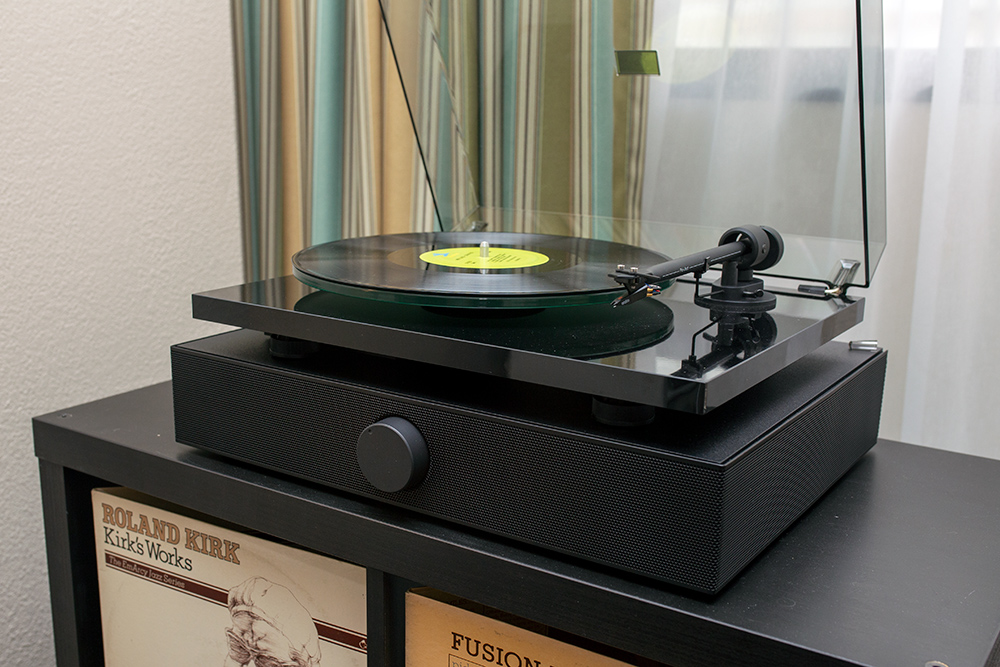 The Spinbase is effectively an all-in-one sound system, like the company’s Model One, but with no turntable. It has two woofers and two soft-dome tweeters driven by class-D amplification and, as with the Model One, the drivers are mounted in such a way as to create a larger, more enveloping soundstage than you’d expect from such a compact device. Bass and treble adjustments can be made on the back panel. If you don’t want to play music out of the internal speakers, there’s a headphone jack. And if you don’t want to listen to vinyl, the Spinbase is Bluetooth 5.0 compatible so you can stream music from your phone or another device. Once again, audiophiles aren’t likely to flock to this item, but those who need a cost-effective speaker solution for their inexpensive turntable will likely love it. 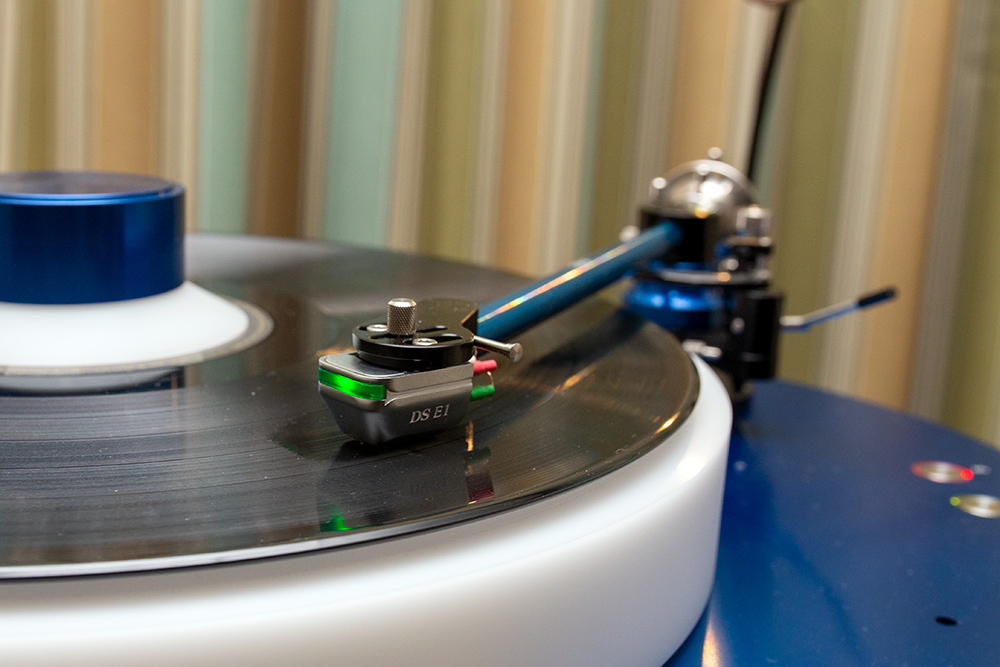 Via Musical Surroundings, its US distributor, Japan’s DS Audio showed its DS-E1 optical phono cartridge, which is priced at $1250, making it the company’s least-expensive optical cartridge yet. It has an elliptical stylus and an aluminum cantilever.

Optical cartridges work on an entirely different principle than moving-magnet or moving-coil cartridges. According to DS Audio’s website: “The optical cartridge detects movement of the needle using infrared LED, light shielding plate and two PD (photo cells). The operating principle is simple, the shading plate vibrates in front of the LED, and the PD (photo cells) behind it detects the change in brightness.” At first that sounds like DS Audio might change the analog signal to digital, but on its website it also stresses this: “The important point here is that the output of the PD (photo cell) is the pure analog sound because the movement of the shading plate = the motion of the record board is output as a voltage change. It is not digital sound.” 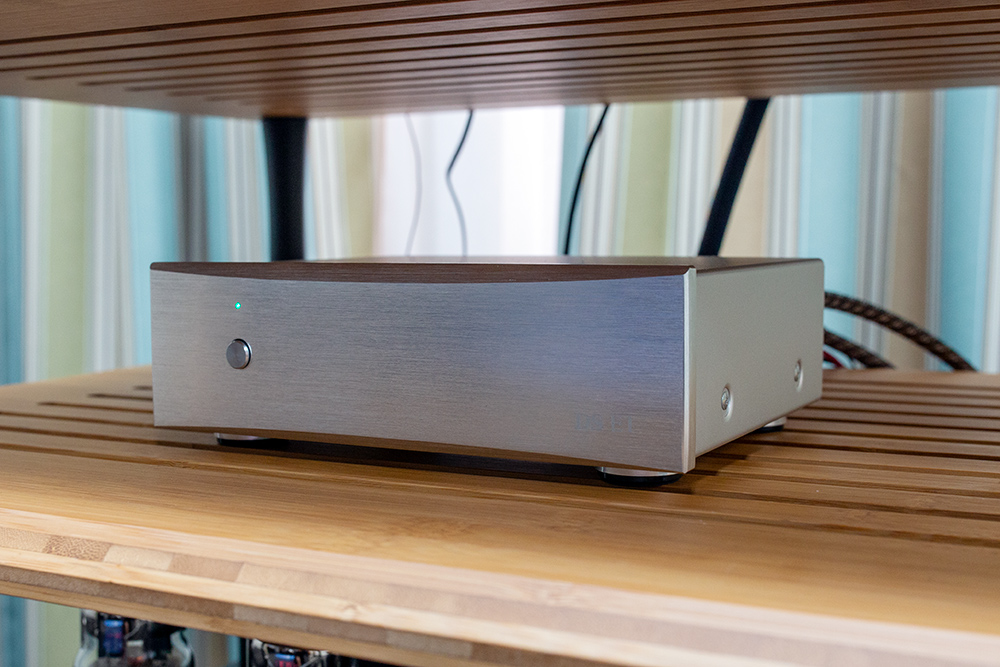 Not being any kind of expert on optical cartridges, I was at first unaware if you could use a traditional phono stage with one. But on its website, DS Audio has the definitive answer to that -- no. It’s because voltage from the phono stage is required to power the cartridge’s LED, and because the RIAA equalization curve in moving-magnet and/or moving-coil phono stages is different than the curve required for an optical cartridge. But don’t worry, DS Audio has you covered with the companion DS-E1 phono stage, which is priced at $1500. 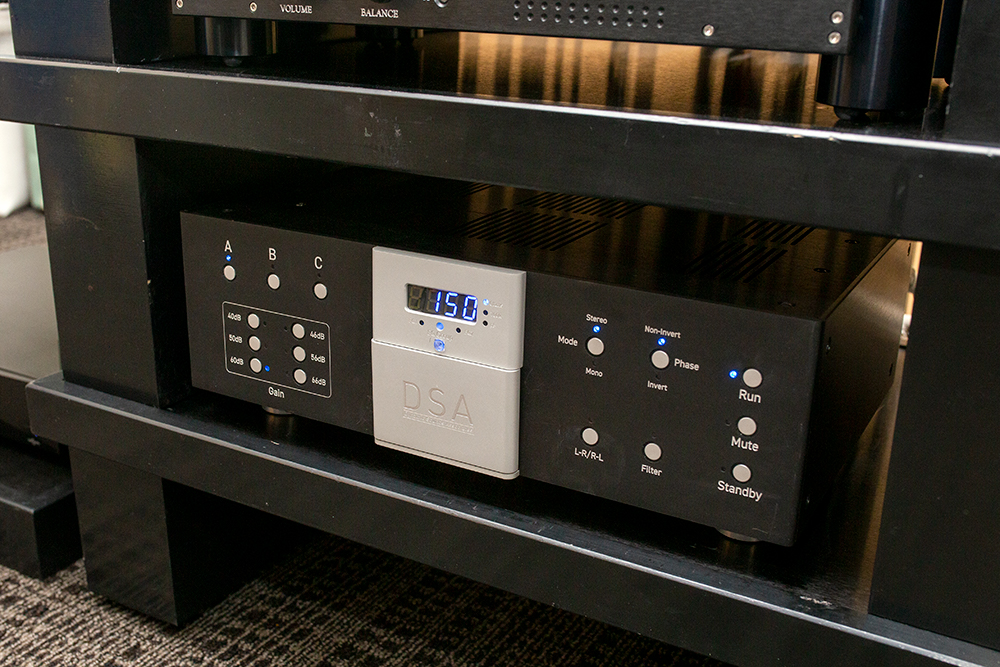 As it was last year, the Florida Audio Expo allowed me to discover companies I didn’t know existed, mostly from in and around Florida. One of this year’s examples is Dynamic Sound Associates, based out of Naples, Florida, maker of the Amp I pure-class-A stereo amplifier, Pre I linestage preamplifier, and three phono stages: the Phono-One, Phono II, and the subject of this coverage, the company’s latest product, the Phono III, which is priced at $18,995.

According to the company’s literature, the Phono III, like the II, has three inputs, but this has a “fully balanced (differential amplifier) front end -- the phono cartridge can be connected in the typical unbalanced mode (RCA), or fully balanced (XLR) for reduced interference and lower noise.” Each input can be customized for a different cartridge type (moving magnet or moving coil), gain, and loading via the front panel or the supplied remote control -- and because the Phono III has non-volatile internal memory, it’ll remember the settings if you power the unit off and then back on. There are also options for phase changing, channel swapping, and muting, among others. One more feature that designer Douglas Hurlburt was excited to tell me about is that, on top of the typical RIAA equalization curve, the Phono III has four more curves for older recordings that were mastered before the RIAA curve became an industry standard. 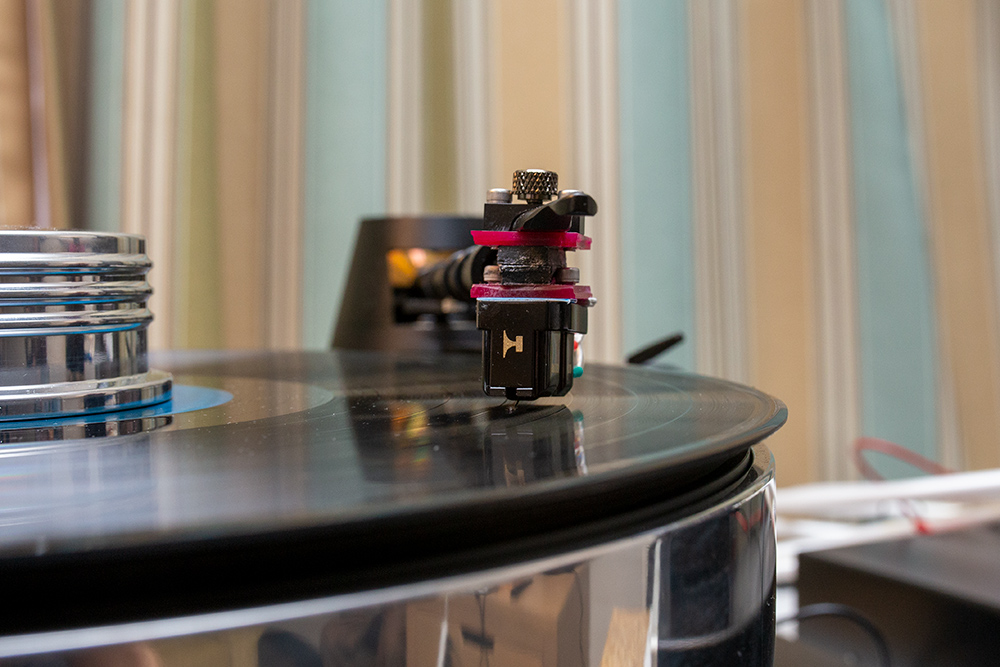 In my second installment on loudspeakers, I highlighted Haniwa’s funky and good-sounding HSP01 loudspeakers and companion HDSA01 digital processor and amplifier. For the analog world, the Japan-based firm showed two other companion products: the HCTR-CO current-output moving-coil cartridge, priced at $10,000, and . . . 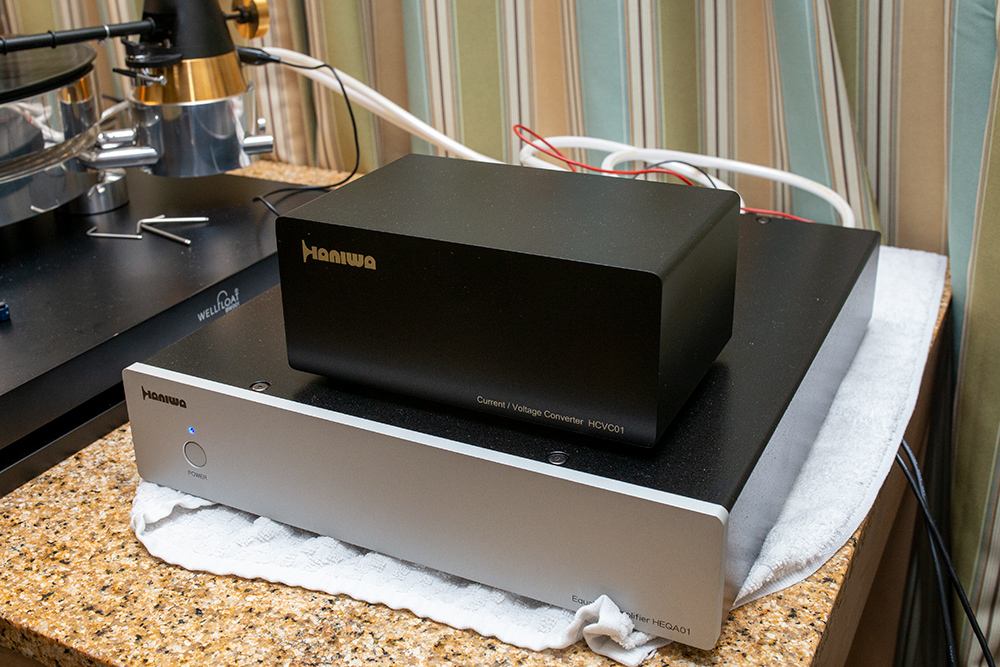 . . . the HCVC01 current-to-voltage converter (top component), for $6000, which the cartridge needs in order to output a signal to a typical voltage-based phono stage. Why did the company go current-based? According to Haniwa’s literature: “Most MC cartridges in the market are considered voltage output devices. Accordingly, developers try to maximize the output voltage by using comparatively high impedance and inductance. However, these efforts tend to introduce large distortions in the output waveform with a high noise level. To solve this problem, we considered the MC cartridge a current output device from the very first stage of development and we concentrated our efforts on minimizing the circuit[’]s total loop impedance. Consequently, we developed an MC cartridge with an impedance of 0.2 ohm. This cartridge’s extremely low impedance is unique in the market.” By the way -- you still need a phono stage with the HCTR-CO/HCVC01 combo. You can use whichever one you want, but Haniwa also offers the HEQA01 phono stage (under the HCVC01) for $8000. 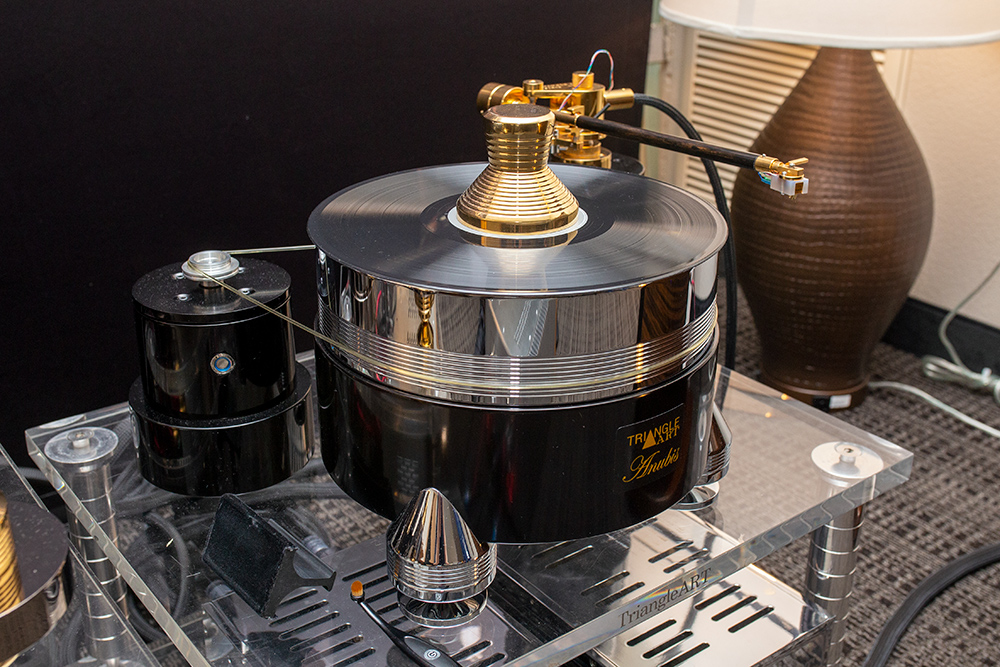 Here’s a US brand that I don’t think many people know is actually from the US -- TriangleArt, based in Anaheim, California. You know, the home of Disneyland. How much more American can you get?

At the Florida Audio Expo 2020, TriangleArt displayed several products, including its latest turntable, the Anubis. Priced at $15,000 without tonearm and cartridge, and weighing in at 160 pounds, which is what I weighed 25 years ago, the Anubis is a serious piece of kit -- it’s pretty big, quite heavy, and beautifully finished. According to the company’s literature: “Anubis comes with a hefty solid composite metal with a 48-millimeter-thick platter made of solid composite metal, used to control and dampen all vibrations for better resonance (more below). Non-inverted steel ball bearings support the heavy platter while still providing an intensely quiet and smooth-as-liquid performance. The jet-black background of this turntable reproduces every soft, inner detail with subtle micro and macro dynamics, presenting a tight and articulate bass while projecting a holographic image and a light, airy soundstage.” 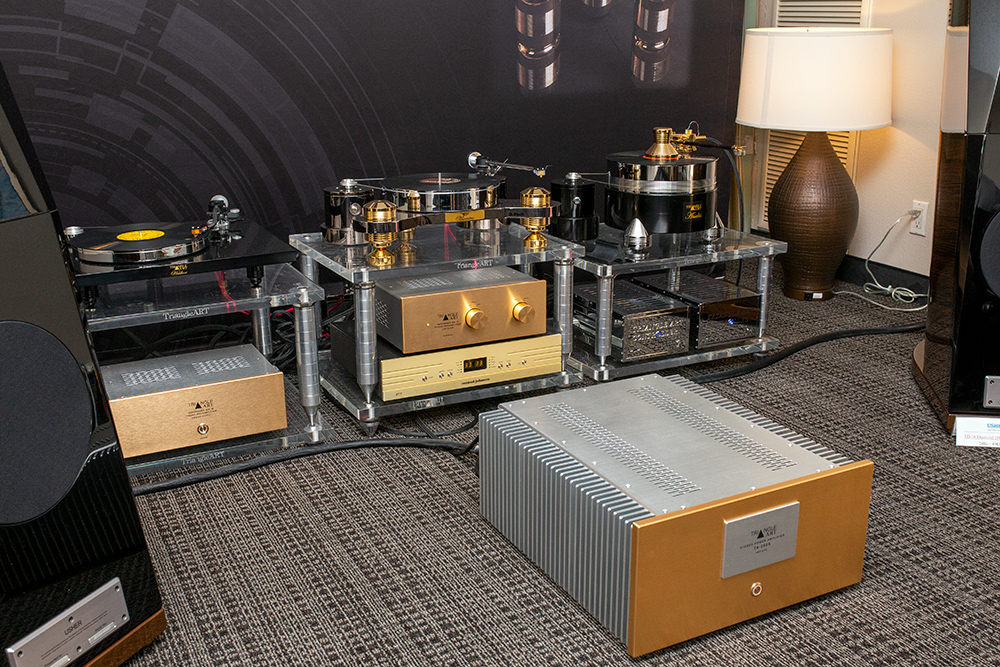 Incidentally, TriangleArt isn’t only a turntable maker (though it has a whopping six ’tables in its line right now). When I looked at the company’s website just now, I could see they also make a tonearm, two cartridges, a phono stage, a record clamp, a preamplifier, four amplifiers, speaker cables, interconnects, and a power cord. But no loudspeakers -- at least not yet. TriangleArt is one of the best-kept secrets in American-made hi-fi -- right in Mickey Mouse’s backyard. 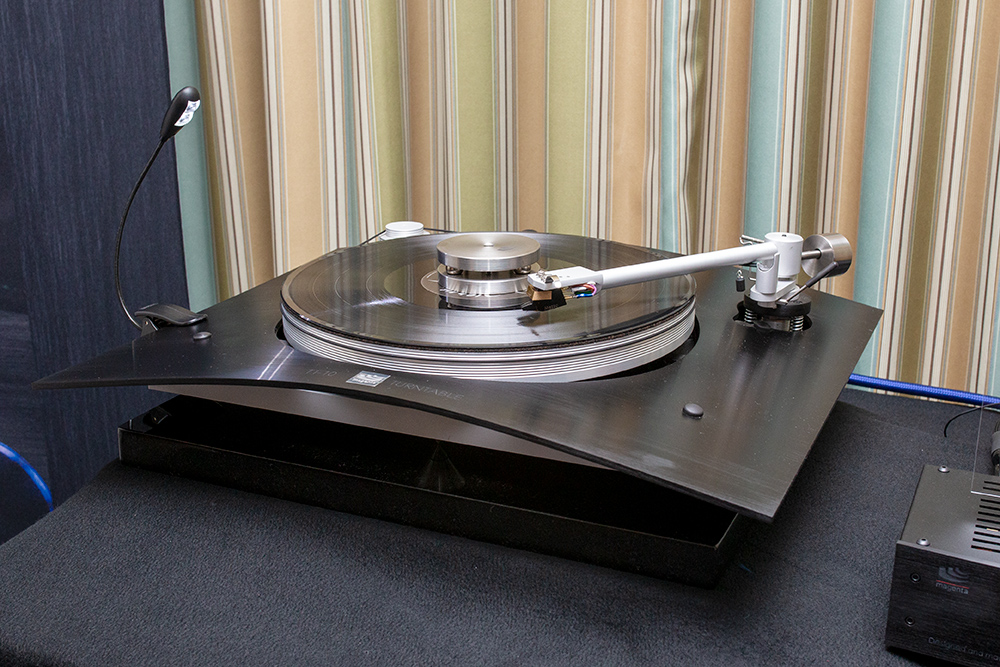 Speaking of secrets, Mexico’s Margules, which has been around for at least 30 years and whose Orpheus 1.3 floorstander I highlighted in my second installment on speakers, makes a whole smattering of gear that many audiophiles don’t know about, much of it affordably priced. One thing is the attractive TT-10 turntable, which is priced at $3000 and includes the company’s UP-01 unipivot tonearm, a record clamp, and accessories. I learned from its website that this is Margules’s first and only turntable and was created in conjunction with a technical university where “the students proposed a fresh and futuristic aesthetic design.” Indeed. Another product is the brand’s . . . 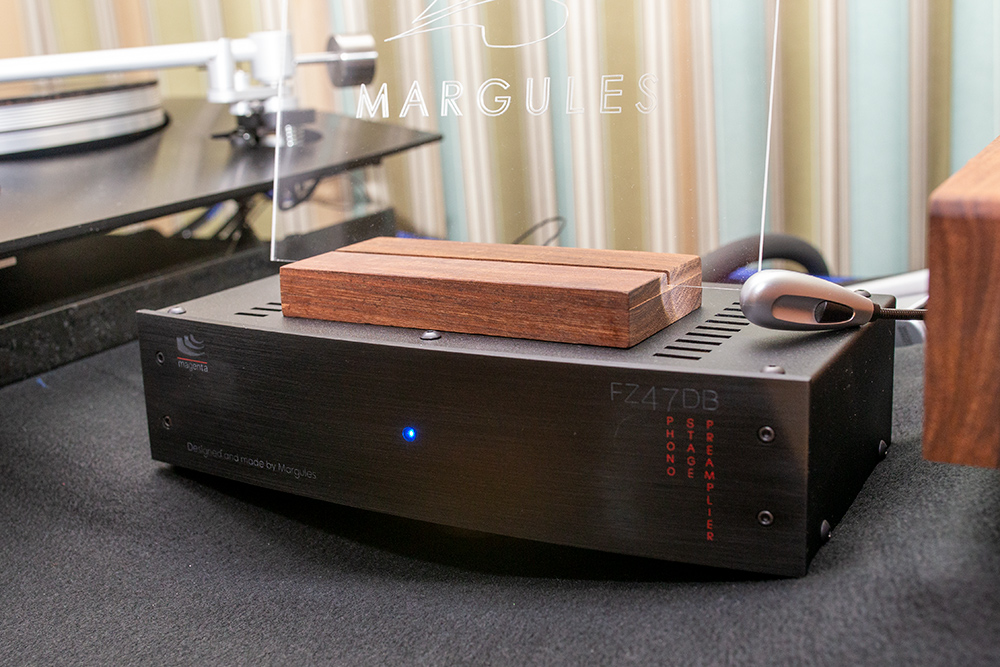 . . . FZ47db 1.3 phono preamplifier, which is priced at $900 and is said to be “based on a circuit topology that does not use any negative feedback: all the RIAA equalization is passive.” The FZ47db provides 54dB of gain and 16 cartridge loading options from 27k ohms to 390k ohms. 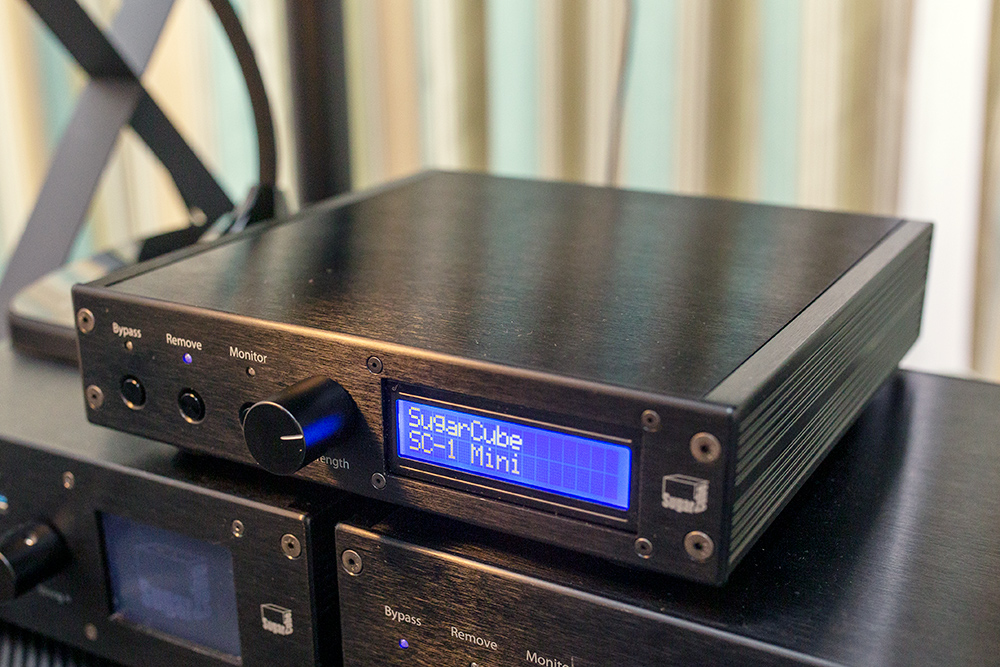 Finally, let me ask you this: aren’t ticks ’n’ pops part of the appeal of vinyl? I always thought so -- but for those who don’t think so, the SweetVinyl SugarCube SC-1 Mini costs $1500 but can make your vinyl rig sound as quiet as digital is. The SweetVinyl technology is purported to do only one thing to the sound of your records: remove the ticks and pops from records without damaging the sound in any way. The two demo pieces our team heard -- one by James Taylor, the other by Steely Dan -- were completely convincing that it works: the ticks and pops were there, and then they weren’t, without otherwise damaging the sound (granted, under show conditions and all). More advanced models in the SweetVinyl line include features such as a built-in phono stage and record-out capability. And if you’re wondering, yes, the units use an analog-to-digital converter. The technology is implemented in the digital domain, and a digital-to-analog converter outputs an analog signal after processing. Is that heresy to vinyl lovers? As I said at the beginning -- some might like the idea of having their ticks ’n’ pops disappear, while others will want them to stay in place. So it’s not for everyone anyway.