Florida’s fabulous wintertime weather was the excuse most of us used last year to justify visiting the first-ever Florida Audio Expo. No one knew what the show would be like, but we all had an inkling that the weather would be much nicer in Tampa in February than where we were coming from. So if the show didn’t pan out, which is a real possibility for any new show, it would still be a nice weekend away. Little did we know that the first Florida Audio Expo would turn out as well as it did.

As a result, the decision to go to Florida Audio Expo 2020 was a different story. Sure, the great Florida February weather still holds true, but it was the surprising success of last year’s show that I think got even more people to this year’s event -- way more. The venue’s still the same -- the Embassy Suites by Hilton Tampa Airport -- but on the first day here, it’s obvious that there are more exhibitors, attendees, and reporters, including on our team. Whereas it was only me representing SoundStage! in 2019, for 2020 I’m now here with Jeff Fritz doing show coverage, while our business development manager, Mark Aling, is also poking around. As a result, expect a lot more coverage on our site this year, starting with this first installment on loudspeakers. All prices are in US dollars. 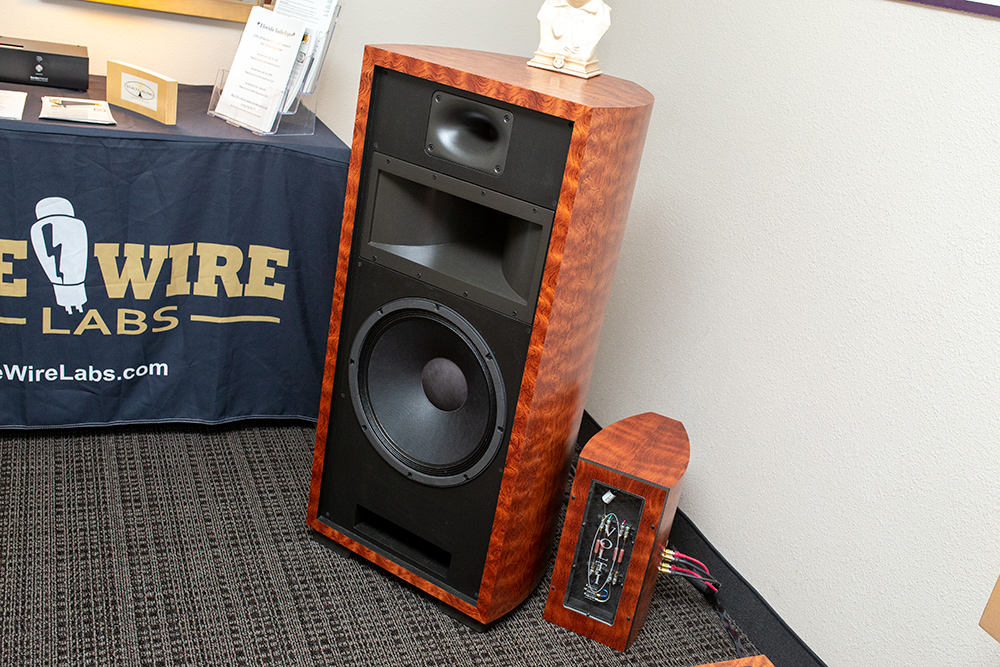 Based in Baxter, Tennessee, Volti Audio proudly proclaims on its website that it “designs, builds, and sells high sensitivity horn speakers that have a musical impact rarely found in our industry.” The newest model is the Rival Special Edition (SE), which has an external crossover and sells for $19,900/pair. According to owner and designer Greg Roberts, this new SE version has the same driver complement as the standard Rival Type I and Type II versions, which are priced lower: a 15" woofer, a 2" midrange compression driver that operates within a wooden horn, and a 1" compression-driver tweeter also within its own horn. The large woofer and the drivers in horns help the Rivals achieve a high claimed sensitivity of 100dB (presumably 1W/m, though not stated), as well as a minimum power-amplifier requirement of just 3W. 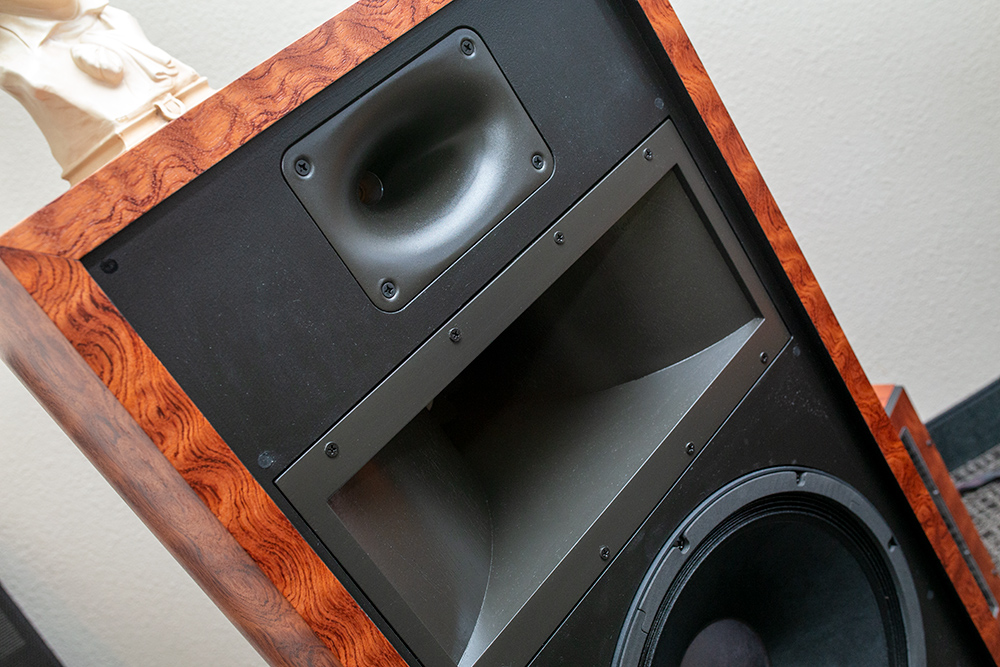 The biggest difference with the SE is that it has curved cabinet walls, putting it in stark contrast to the flat walls for the two other Rivals. Roberts described the cabinet in an e-mail he sent me before the show: “Standard Rivals are built with 1"-thick Baltic Birch plywood, something that I consider to be a superior material for building speaker cabinets. Not many other speakers can match it for long-term durability, sound quality, and stoutness. The SE has curved sides that are more than 1"-thick Baltic Birch plywood. I’m laminating my own curved panels in a vacuum bag with a permanent (two-part epoxy) glue. I’m pretty sure I could lay one down on my driveway and drive my Yukon front tire up onto one without it crushing.”

I’m not sure that he needs to drive over the cabinet to prove its strength, but in looking at the new Rival SE, it’s obvious that Roberts has his woodworking skills down -- the demo pair looked really good. Plus, they sounded big, bold, and dynamic being driven by a 20Wpc BorderPatrol P20 EXD tube amplifier. 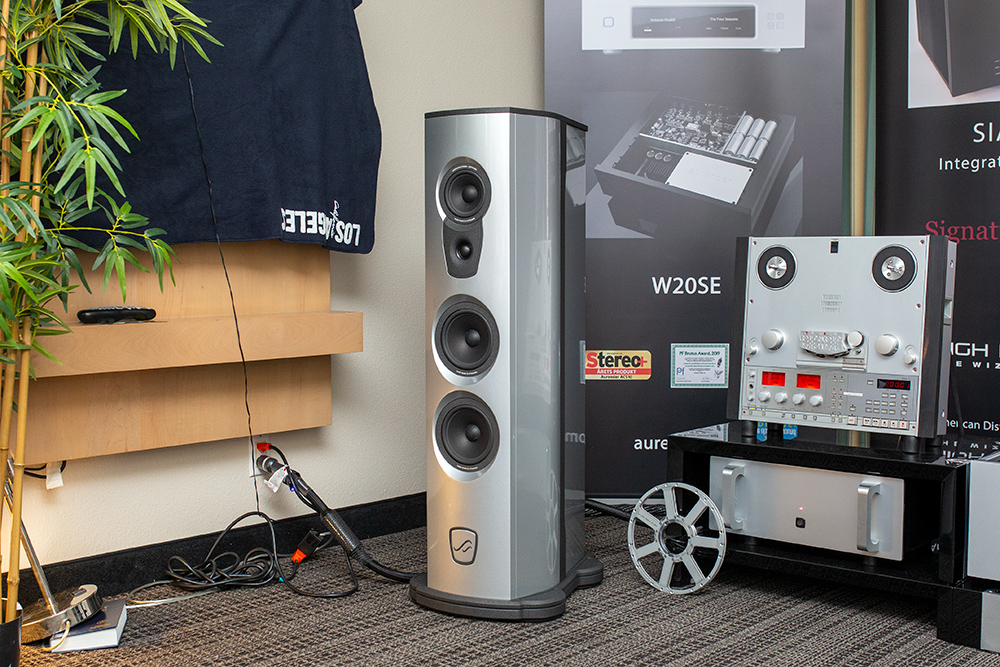 The AudioSolutions Virtuoso S loudspeaker, a little brother to the company’s Virtuoso M, isn’t brand spanking new -- last November, the Lithuania-based company had it on static display at Warsaw’s Audio Video Show. But we were told that this is the first time the speaker is being shown in the United States, courtesy of North American distributor High End by Oz, so we felt it important to include here, particularly because we think AudioSolutions is a company more people should know about, since its loudspeakers seem to get better with each new product introduction. 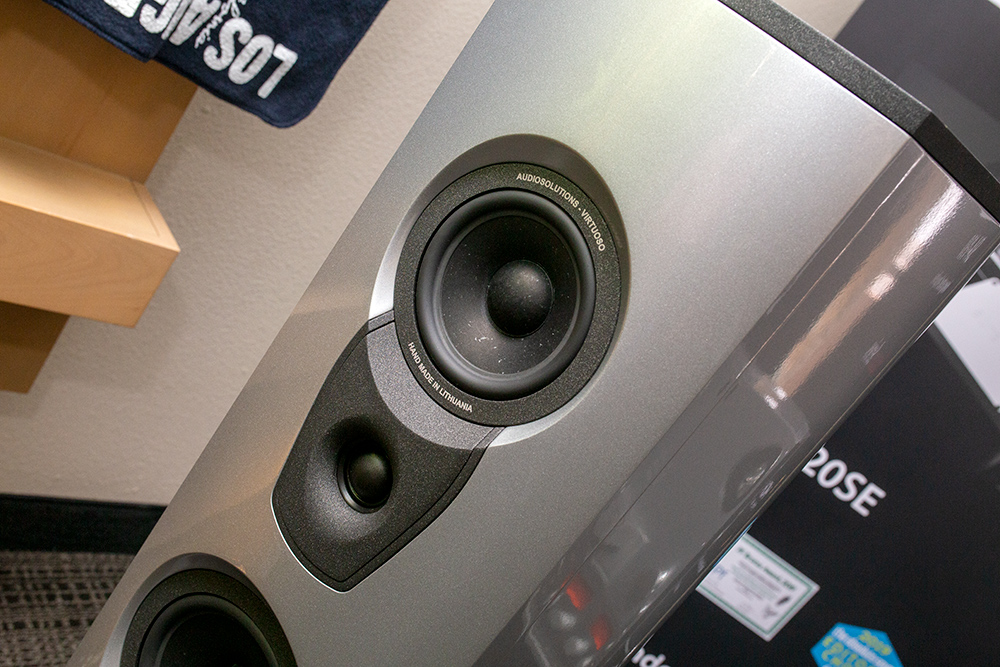 Priced at $22,500/pair, the Virtuoso S is a three-way design with a 1.18" soft-dome tweeter, a 5.2" pulp-cone midrange, and two 6.5" pulp-cone woofers. The midrange and woofers are crossed over at 400Hz, which isn’t out of the ordinary, but the transition from the midrange to the tweeter is a very high 7000Hz, which is done to keep crossover components out of the midrange band, where the ear is most sensitive. On the backside is a large knob with three settings: Balanced, Moderate, and Enhanced. Each setting changes the frequency response a little, to accommodate for room acoustics and listener preferences. Basically, you decide what’s best for your situation. As with almost all of AudioSolutions’ speakers, a wide range of finishes are available. In the case of the Virtuoso S, they are Zinc Grey, Charcoal Grey, Pine Green, Ice Blue, Glacier Blue, Pearl White, and the finish on display in Florida, Silver Grey. 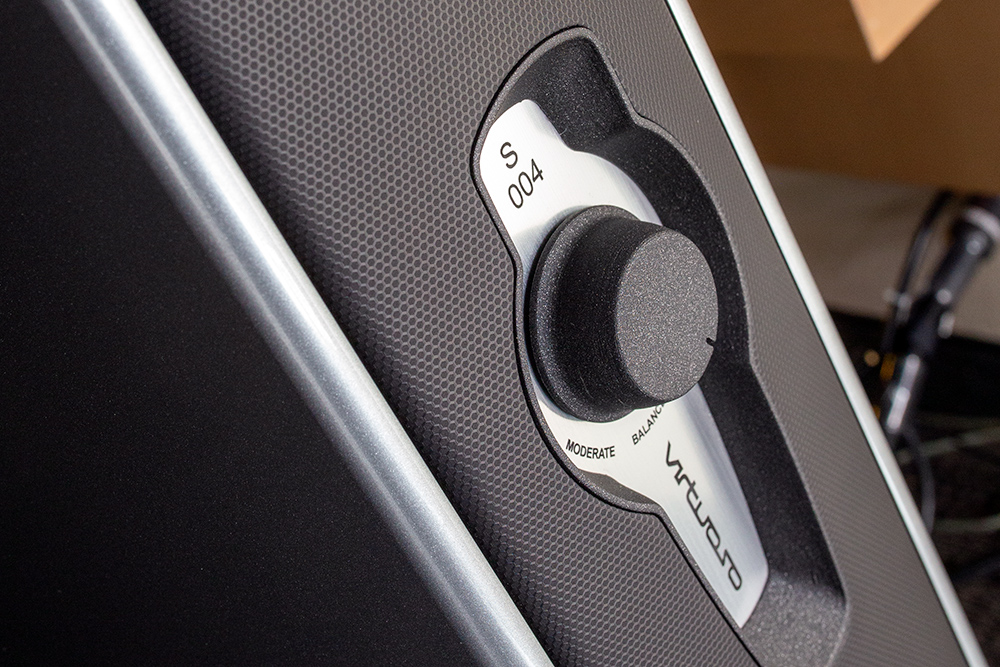 At the Florida Audio Expo, the speakers were set to Enhanced, so I expected the pair to sound bright, but they didn’t. Instead, they sounded exceptionally detailed in the highs, but definitely not too tipped-up on the top. They also sounded exceptionally smooth right across the audioband. Under show conditions, this was the best sound I’ve heard from any of AudioSolutions’ speakers. Also in the room helping to create this sound were a Vitus Audio SIA-030 integrated amp and SCD-25 MkII CD player / DAC, which Oz also distributes, plus an Aurender W20SE music server, a United Home Audio Ultima tape deck, and a loom of Synergistic Research Galileo-series cables.

When I first saw a picture of the MC Audiotech Forty-10 loudspeaker, which is priced at $35,000/pair, I knew that I was looking at a unique loudspeaker -- but I had no idea if what I was seeing was an amalgamation of really good ideas or really bad ones. The more I read about the product on the company’s website, however, I became convinced that there seemed to be enough good about it to look more deeply into it, which I did at Florida Audio Expo 2020.

The product name, Forty-10, comes from designer Paul Paddock’s 40 years of experience and the ten Wide Band Line Source (WBLS) transducers each speaker has. Those ten WBLS transducers are in the Spaced Array section, which is on top and covers the frequency range from 100Hz to 20kHz. Underneath is the Folded Cube bass section, which has two 18" woofers that cover from 100Hz down to 20Hz. The crossover is external and line-level, so two external power amplifiers must be used for each speaker (dual mono amps or a stereo amplifier’s left and right outputs). The amps are not included in the price, but what is included is a low-frequency controller that MC Audiotech says is intended “to perfectly match the bass output to the array and to your room.” 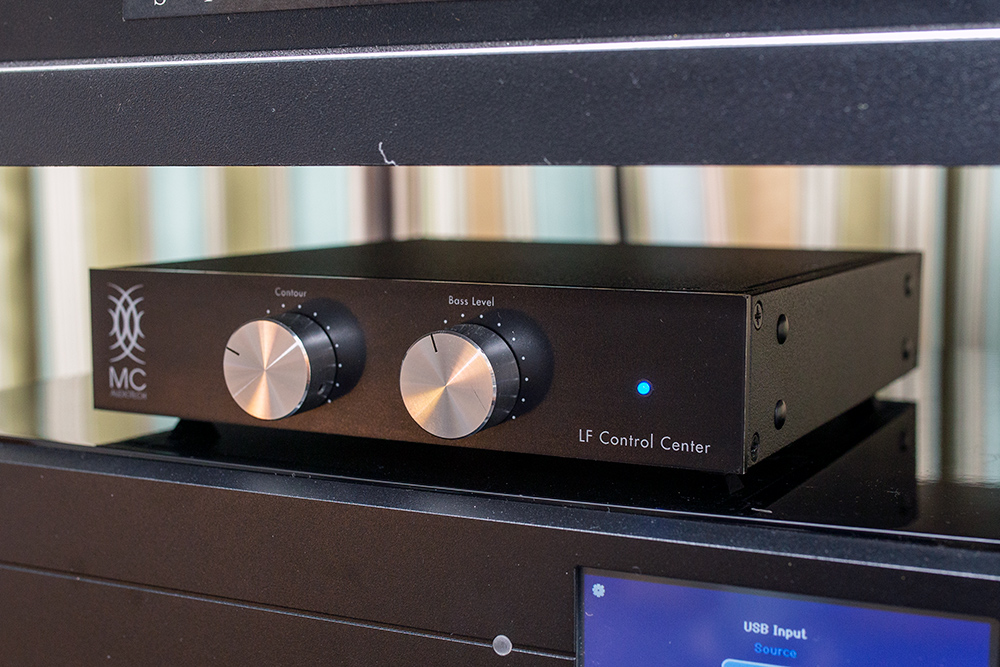 About the WBLS transducers -- on the company’s website is a “white paper” written by Paddock that describes the technology, and it has this in it: “My original invention, patented in 1985, married a twin cylindrical diaphragm driven at its junction by a vertical wire loop located between a twin magnetic gap ‘voice coil’ system. This device was commercially offered by the Linaeum Corporation from the late 1980s through much of the 1990s. The Impact ‘Airfoil Loudspeaker’ later employed a slightly different design with a single membrane -- again my design.” The WBLS technology in the Forty-10, Paddock claims, is an enhancement over these designs in “bandwidth, sensitivity and reliability.” 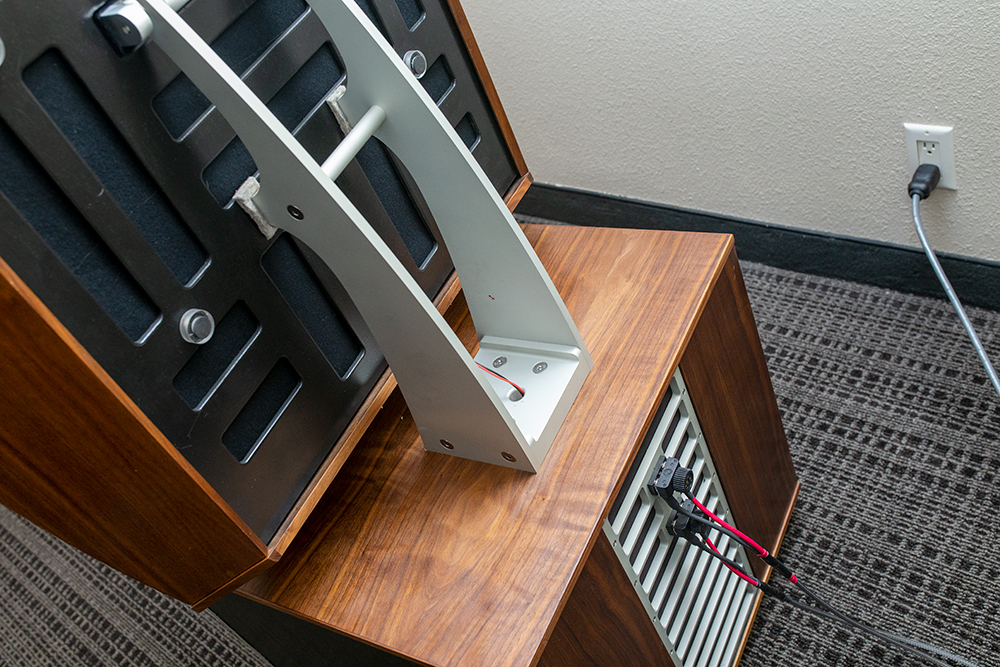 According to the company’s specs, the 12 drivers in each Forty-10 combine to produce full-range sound over a broad horizontal listening window -- the off-axis responses are said to stay within 2.5dB of the on-axis response for ±60 degrees. The company’s specs also claim that the Space Array has a sensitivity of 96dB (2.83V/m), while the Folded Cube section has a sensitivity of 93dB (2.83V/m), which, I presume, the crossover and controller combine to marry up (the 3dB of difference has to be accommodated for in some way). Claimed impedance for each section is 4 ohms. All told, the Forty-10 is one of the most intriguing new speakers I’ve come across in a long time, as well as one of the most interesting sounding -- the sound at FAE 2020 was super spacious and absolutely effortless. I also found the sound remarkably consistent as I moved all around the room, as well as when I sat down and stood up. Most impressive, however, was the clarity and smoothness through the midrange. As a result, I think the ideas that have gone into the Forty-10 are far more good than bad. 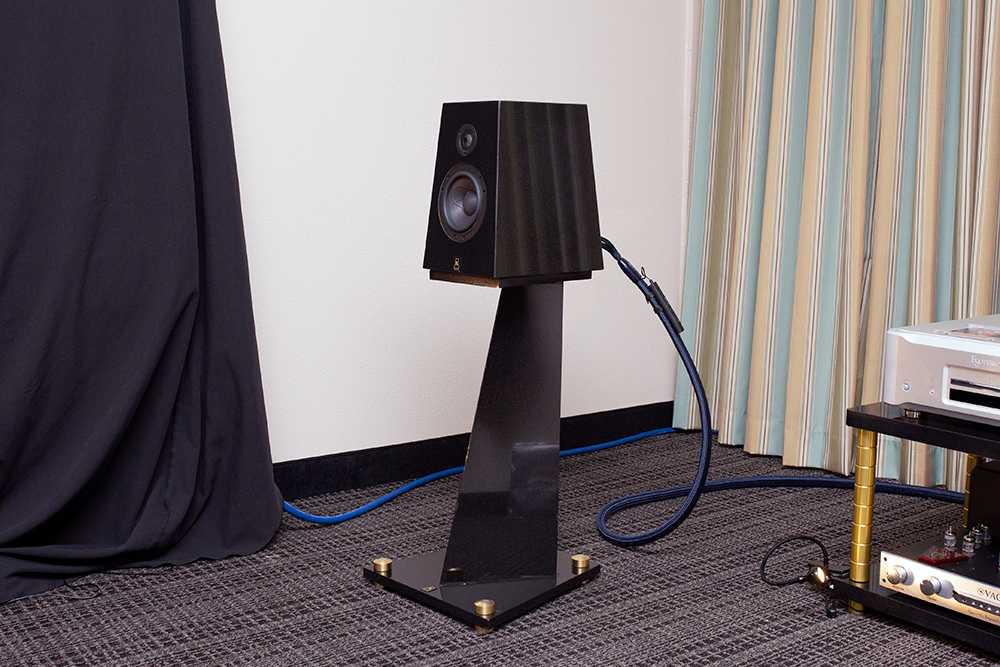 Acora Acoustics is based in Scarborough, Ontario, Canada, which is just over four hours by car from where I live in Ottawa, Ontario. The Canadian company was at the Florida Audio Expo showing its SRB stand-mounted loudspeaker and its . . . 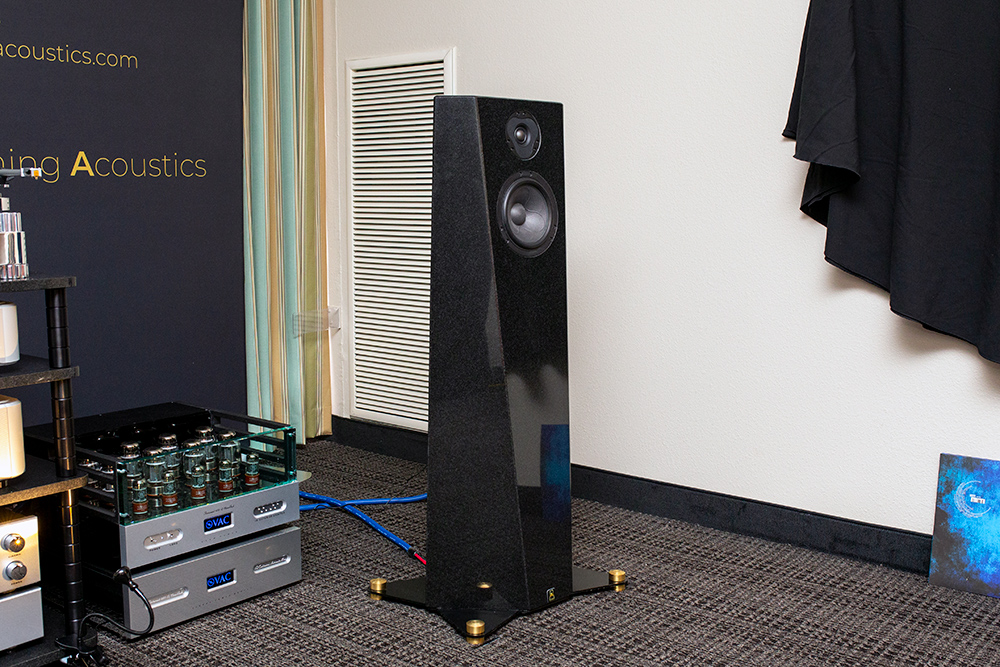 . . . floorstanding SRC-1. The SRB is a two-way design that retails for $15,000 per pair, plus another $5000 if you want to have a pair of the company’s SRS stands. The SRC-1 is also a two-way -- it retails for $27,000 per pair. The SRB uses a 1" beryllium-dome tweeter and a 5.5" paper-cone woofer, while the SRC-1 has a 1" soft-dome tweeter and a 7" paper-cone woofer. I found it odd that the SRB has a beryllium-dome tweeter and the SRC-1 has a soft-dome one because they also have one speaker above the SRC-1, the SRC-2, which wasn’t there, but I was able to see it in the brochure. It has a beryllium dome again, though it appears to be a different tweeter than the SRB’s (all the drivers from Scan-Speak, however). Aesthetically, the SRC-2 resembles the SRC-1, but it’s a 2.5-way with two 7" paper-cone woofers. That means that both speakers are working to produce the bass, but only the topmost one rides through the midrange and hands off to the tweeter. It’s priced at $37,000/pair. 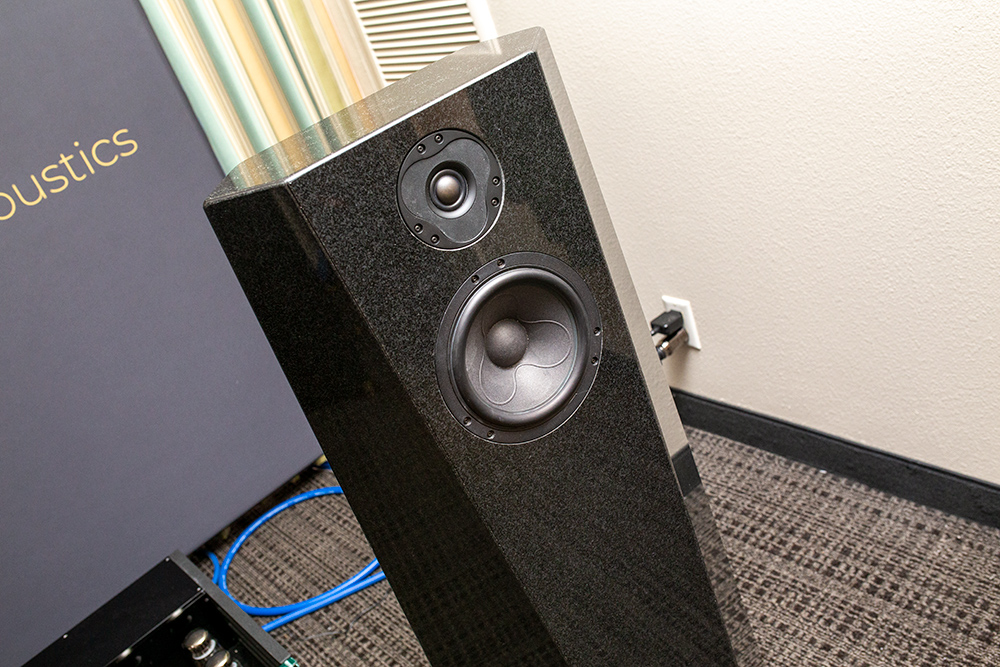 While the tweeters vary from speaker to speaker, the cabinet material is consistent throughout the line: solid granite, which is also what’s used for the SRS stands. That helps to explain the speakers’ fairly high prices, as well as their substantial weights. For the SRB, which weighs 59 pounds, the granite walls are 0.79" thick. Each SRS stand, which is also built with 0.79"-thick granite, weighs 63 pounds. The SRC-1 and SRC-2 have walls that are 1.18" (2cm) thick and respectively weigh 246 and 244 pounds. Since this company is fairly close to me, the next time I pass through Scarborough, which is part of the Greater Toronto Area (GTA), I might try to stop by and learn more, because what I heard in Florida intrigued me. The SRBs had a very dynamic sound, while the SRC-1s sound bigger and bolder than compact two-way floorstanders usually do.