As expected at this year’s CES, the high-end audio exhibitors were primarily restricted to one floor of the Venetian hotel -- and the exhibitors that were there didn’t even fill the entire floor (companies from other industries were located in some of the suites). But I was still able to find some interesting speakers on my first day at the show, including a couple that were offsite at the Hard Rock Hotel, where Harman (the parent company of JBL and Revel, among other brands) was exhibiting in addition to having a suite at the Venetian. All prices in USD. 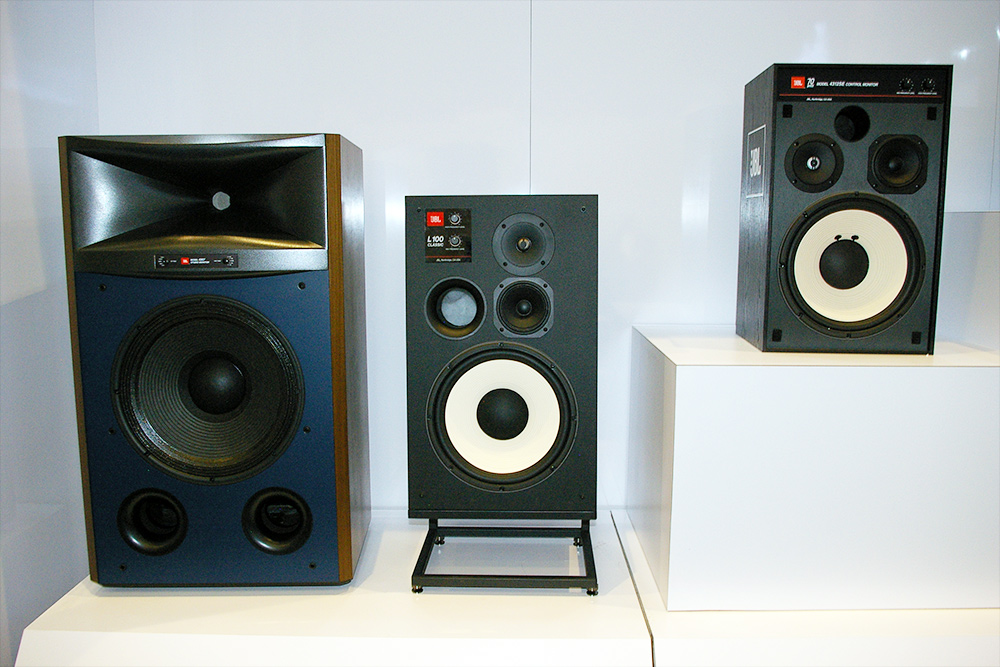 You might be thinking we’ve mistakenly published a picture from a CES show in the 1970s when looking at the new JBL L100 Classic (center in photo). It’s a totally redesigned version of the classic L100 model of the 1970s. Available in a satin walnut-veneer finish with your choice of the iconic Quadrex foam grille in blue, orange, or black (I’m partial to the orange), the L100 Classic is a three-way bookshelf design that’s available with an optional metal stand. 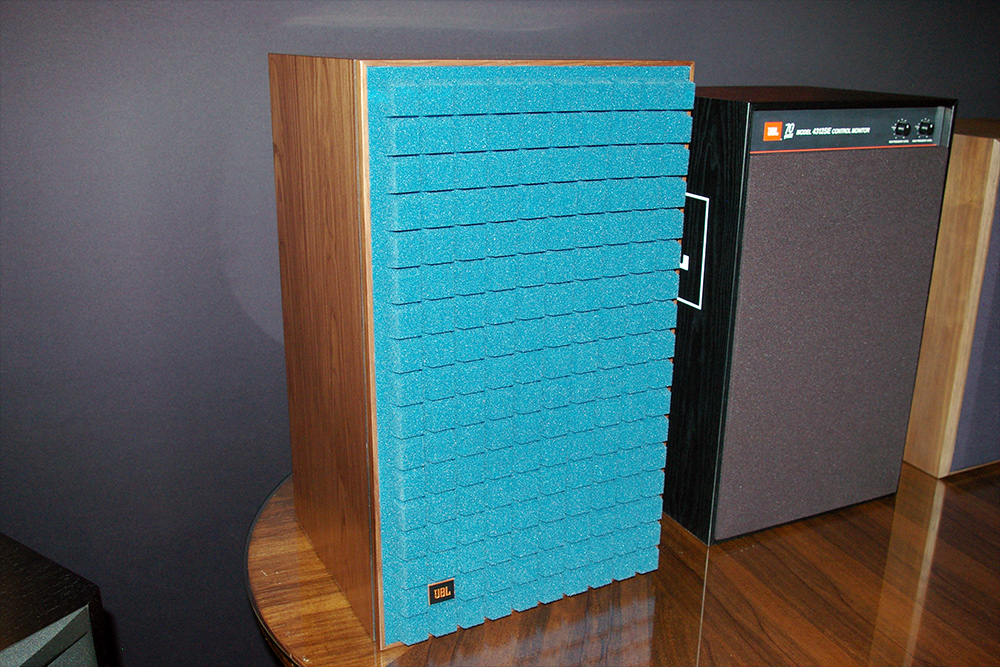 Designed by Chris Hagen, the L100 Classic features all new drivers, including a 1" titanium-dome tweeter with a waveguide and a motor structure similar to that of the upcoming Revel Performa3 Be-series tweeter, a 5" pulp-cone midrange, a 12" paper-cone bass driver, and a front-mounted port. It will be available in the spring of 2018 at a price of $4000/pr. 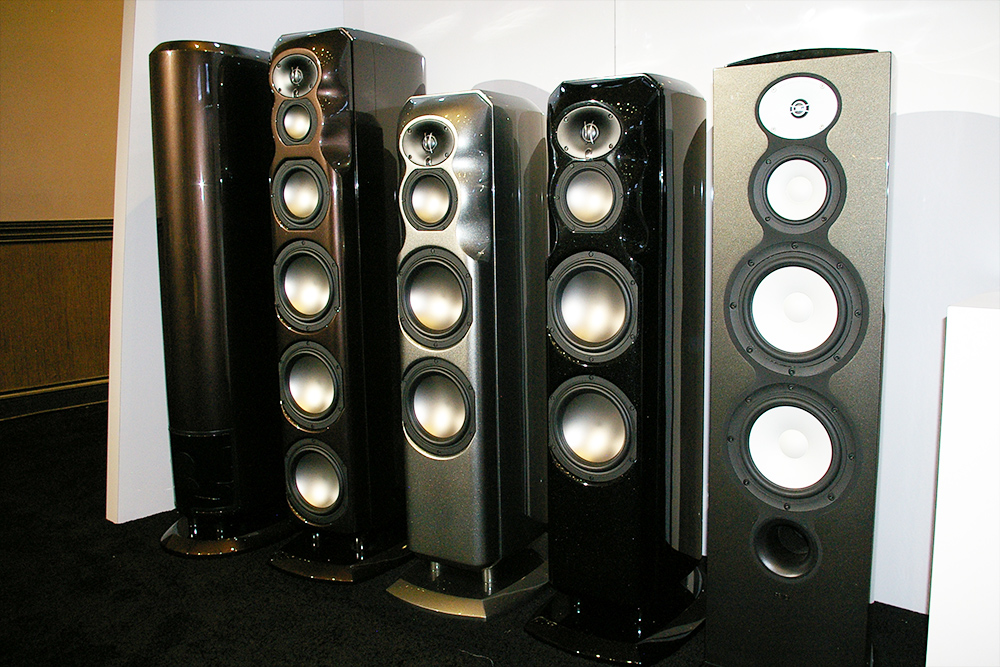 Revel was showing its Ultima2 series in new finishes: one that was an attractive chocolatey-burgundy color, as well as metallic gray and black colors. Prices of the Salon2 and Studio2 (the two leftmost pairs, respectively—the right speaker is the Performa3 F208Be), which have remained steady at $22,000/pr. and $16,000/pr., respectively, since their introduction about a decade ago, will increase to $26,000/pr. and $20,000/pr. with the new finishes. 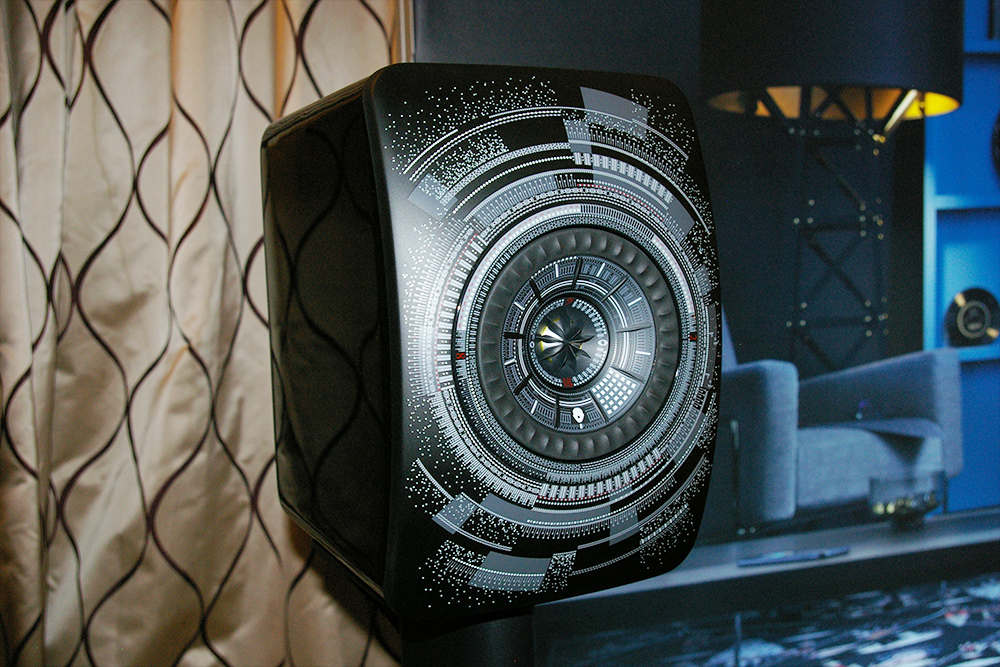 Speaking of new finishes, KEF was showing the special-edition LS50W Nocturne, which features a very cool finish that was created in a collaboration with the globally renowned design studio Marcel Wanders. Some of the elements of the futuristic design actually glow in the dark. The LS50W Nocturne is priced at $2499/pr., so $300 more than a standard LS50W pair. 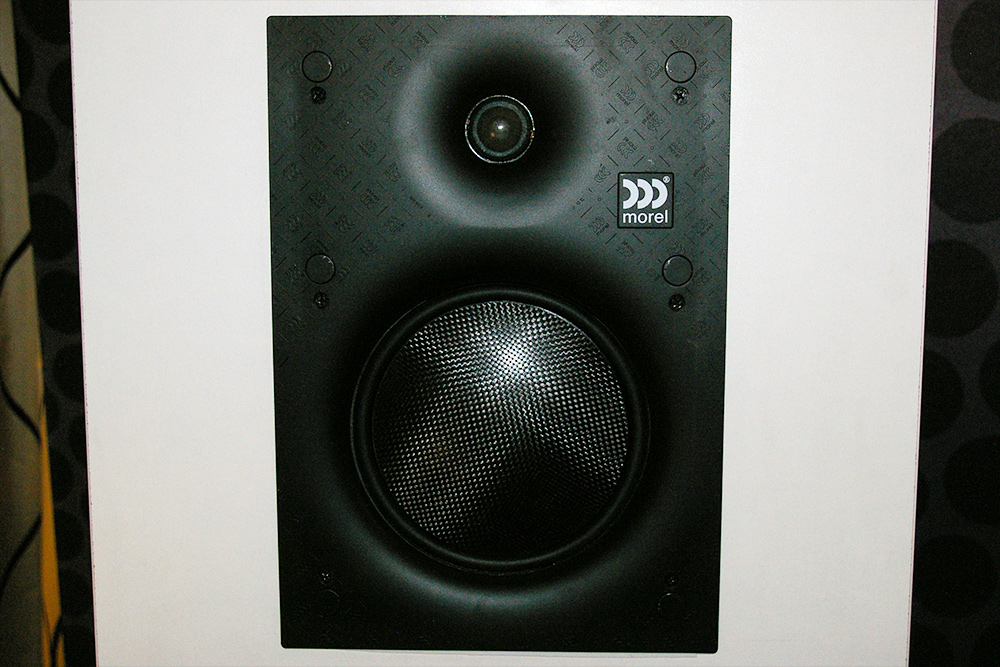 The Morel SoundWall PowerSlim PMW600P looked and sounded like other good in-wall speakers that I have listened to, but . . . 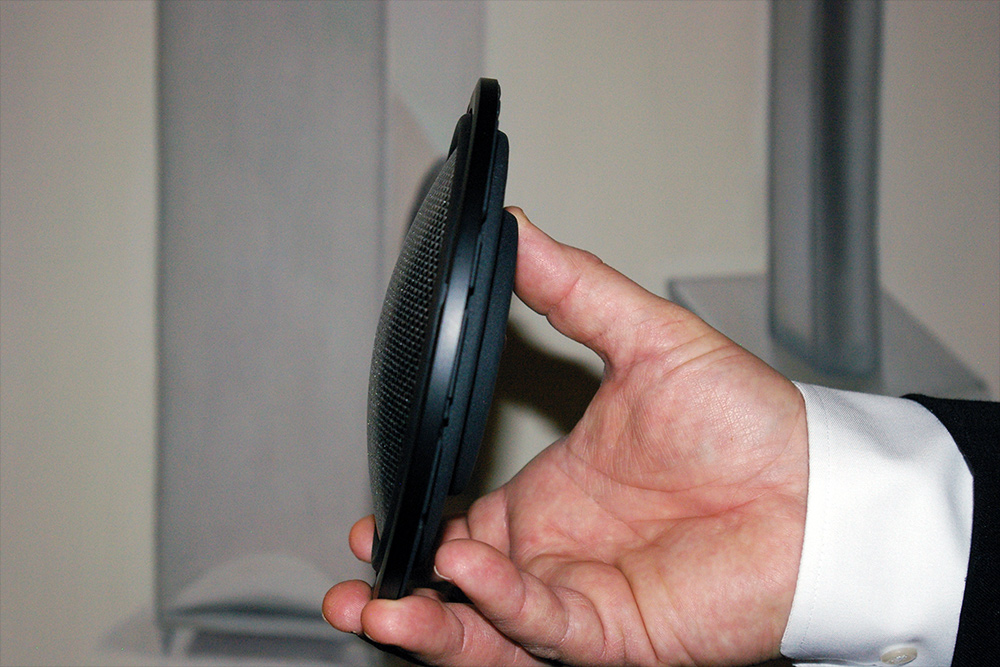 . . . as you can see in the side profile of the midrange-bass driver, it’s a very slim speaker, as its name implies. It uses a 1.1" silk-dome tweeter and a 6" midrange-bass driver, the latter featuring neodymium magnets in the motor system and a convex diaphragm made of a sandwich of carbon fiber with a foam core. A coaxial model will also be offered and both are expected to be available at the end of Q1 or early Q2 at a price of $1100/pr. 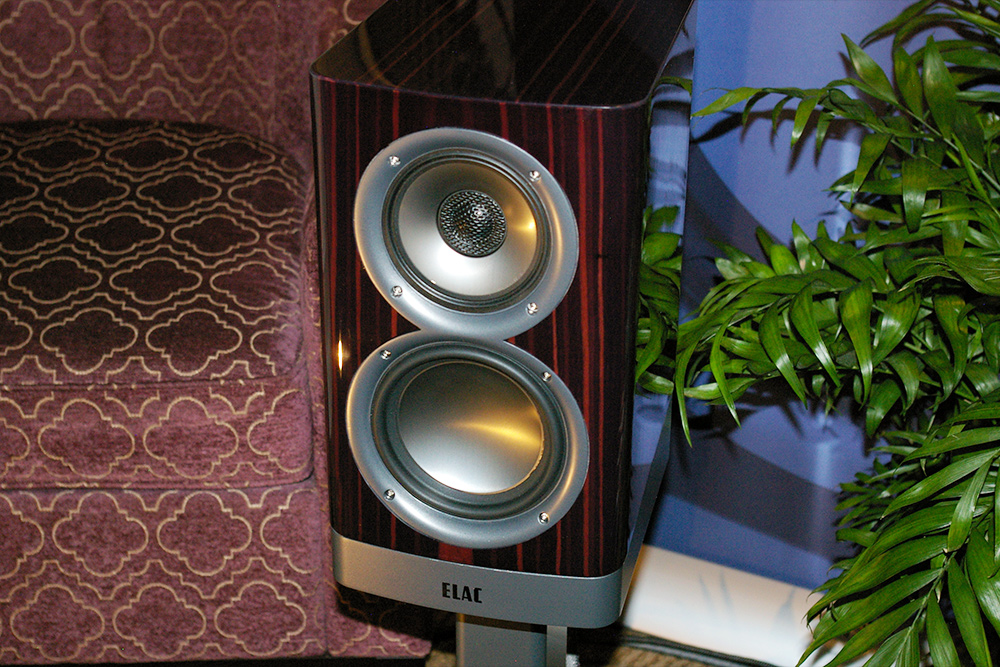 Elac has recently impressed us with its affordable Debut and Uni-Fi models, as well as the more upscale Andante line. At this year’s CES, the company introduced a new line of powered loudspeakers, Argo, consisting of the B51 monitor (shown above) and . . . 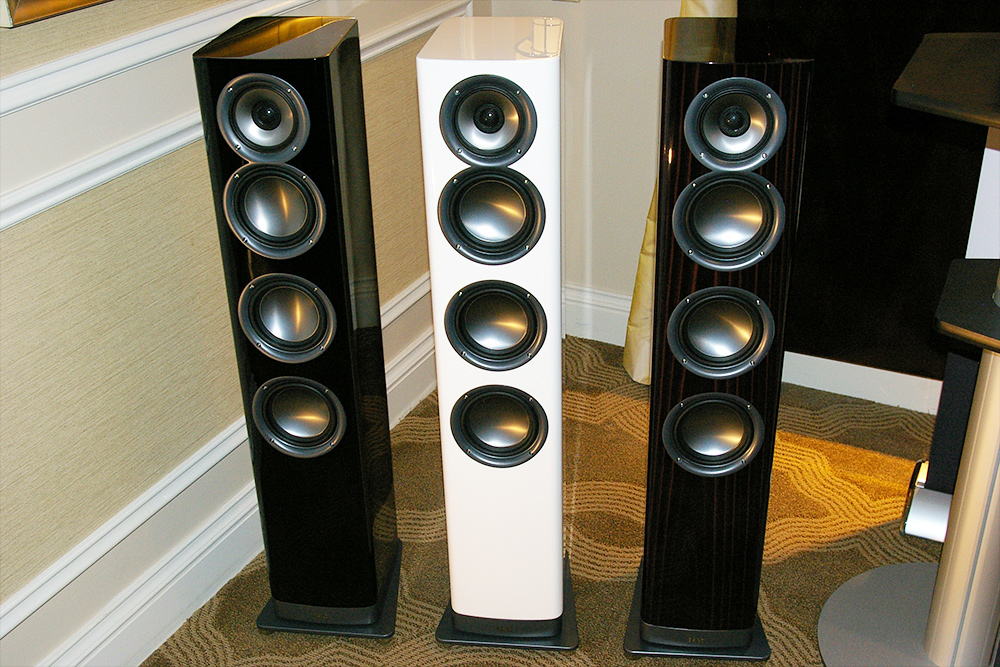 . . . F51 floorstander (shown above). Both speakers feature all new drivers, including a 4" aluminum-cone midrange driver combined with a concentrically mounted 1" soft-dome tweeter. The B51 has a single 5.25" woofer, while the F51 has three 5.25" woofers. In each model . . . 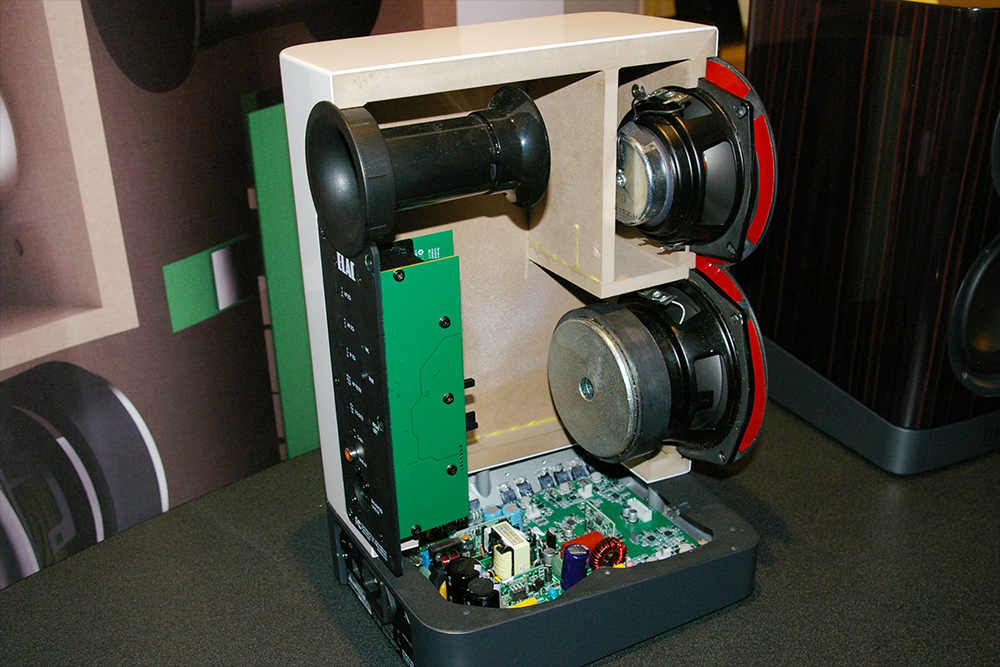 . . . a 30W class-AB amplifier is used for the tweeter and a 70W BASH class-AB amplifier drives the midrange. For the B51’s single woofer and the F51’s trio of woofers, a 150W BASH class-AB amplifier is used. In addition to analog XLR and RCA inputs on the Argos, when used with Elac’s Discovery Connect wireless transmitter, they can function wirelessly and are able to stream Discovery, Spotify Connect, Bluetooth, AirPlay, and Roon. The Argos are available in gloss black, gloss white, and wood veneer finishes, and are expected to be available in May or June at $2000/pr. for the B51 and $4000/pr. for the F51. 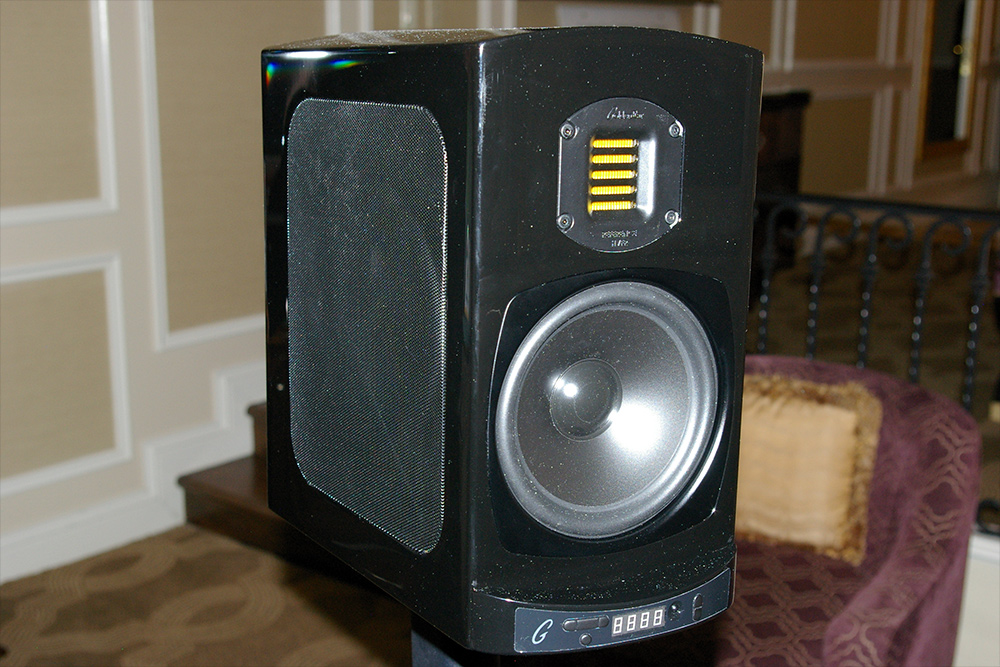 This year, GoldenEar Technology did not have an active display at CES like the company usually does, but instead offered a sneak peek at an upcoming product that is expected to be available later in 2018. The DigitalAktiv 3 is a high-performance, powered, wireless loudspeaker with voice control and multizone capability. It will support Bluetooth and Wi-Fi via Chromecast, resulting in all the popular streaming services being available to it for a Cast-capable device. The DigitalAktiv 3 can be used as a single speaker or as a stereo pair, wirelessly linked by low-latency WiSA radio.

The High-Velocity Folded-Ribbon (HVFR) tweeter in the DigitalAktiv 3 is the same as that used in the company’s $8000/pr. Triton Reference, and the 6" cast-basket midrange-bass driver is based on the one used in the Reference as well. So both drivers are of very high quality. A 200W class-AB amplifier powers the midrange-bass driver, while a 60W class-AB amplifier is used for the tweeter. The DigitalAktiv 3 also features inertially balanced 8" passive radiators on its sides, a hallmark of GoldenEar’s newest speaker designs. The price of the DigitalAktiv 3 has yet to be determined, but is expected to be in the range of $1000 per speaker.