Because the CEDIA Expo spans so many fields -- including custom installation, home theater, two-channel audio, outdoor sound, and home automation -- I always find interesting items that don’t quite fit into the coverage we typically do here at SoundStage! Global. So here’s a roundup of all the stuff from the 2018 CEDIA Expo that didn’t fit into any of my other articles about the show. All prices in USD. 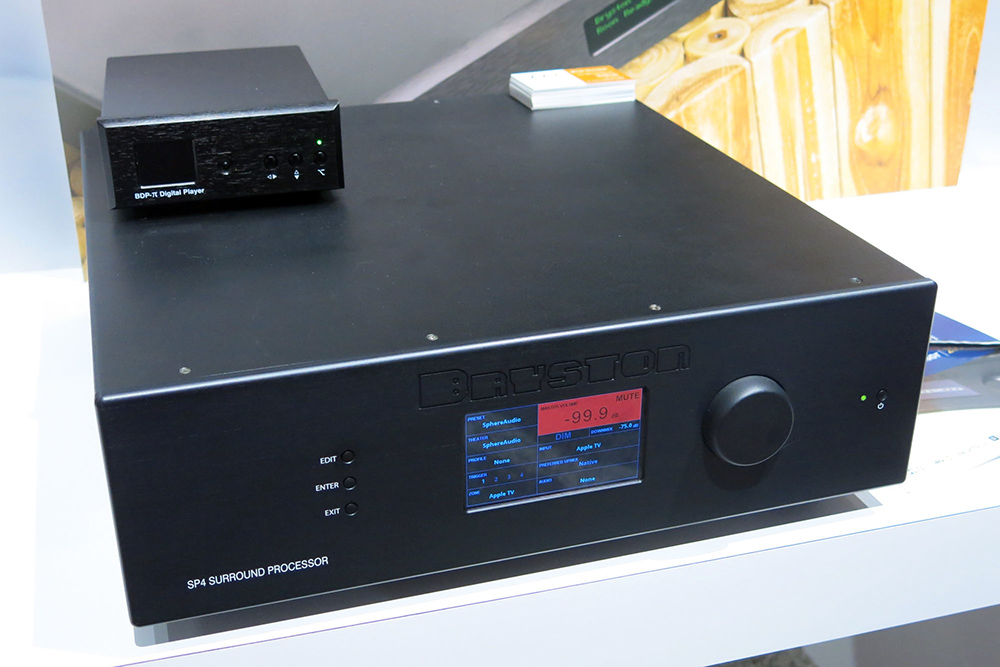 The SP4 ($13,995) is Bryston’s bid for prominence in the high-end surround-processor category. It’s a 16-channel preamp with Dolby Atmos, DTS:X, and Auro-3D processing. The channels can be assigned for home-theater use or to create extra zones of sound in different rooms, and the SP4 can store EQ profiles for those other zones. The unit does not have onscreen display, but it doesn’t need it -- it can be set up from a laptop or iPad, and Bryston provides a dedicated iPad app for that purpose. It offers balanced and unbalanced outputs, and Bryston’s hoping to work Roon compatibility into the unit. 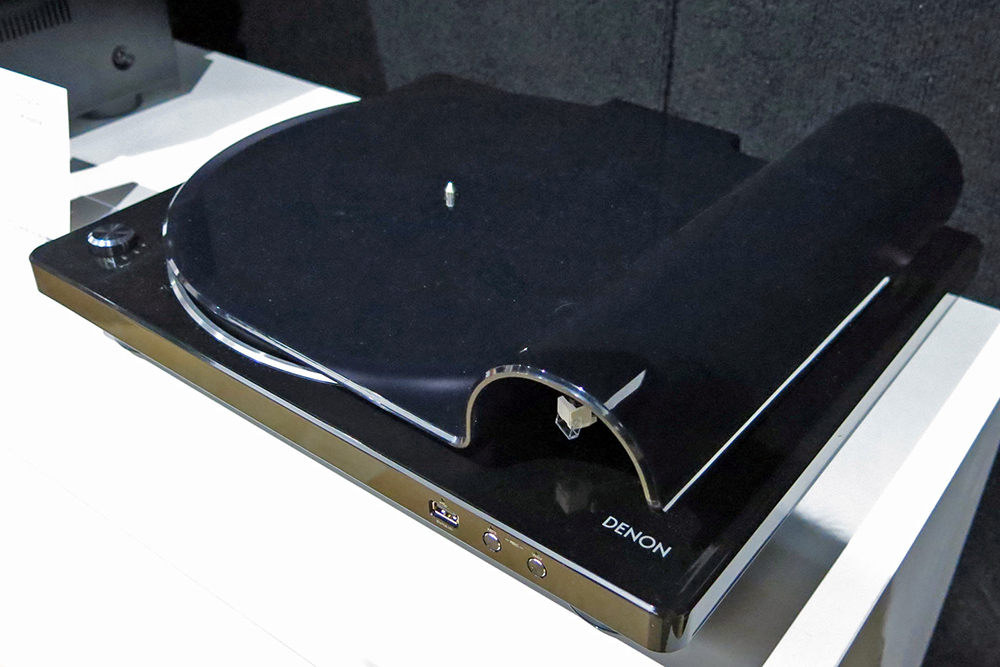 Denon’s DP-450USB ($599) has a built-in phono preamp and a USB output that lets it record directly to USB sticks and drives, in either MP3 or WAV format. (You can see the USB port on the front.) But the coolest thing about it might be the dust cover, which flips up to double as a record stand and is designed so it doesn’t rattle and resonate as typical dust covers do. A non-USB version, the DP-400 ($499), is also available. 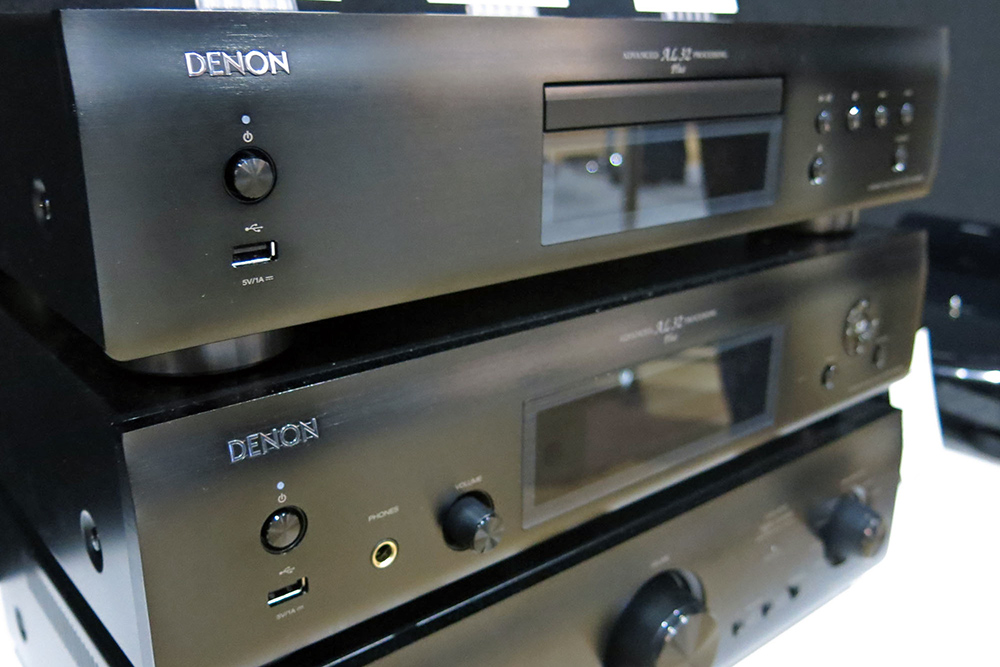 Not a lot of traditional two-channel gear appears at the CEDIA Expo, but Denon used the event to debut a new integrated amp, digital media player, and CD player. The DCD-800NE ($499, top) is a CD player with a USB input compatible with PCM files up to 24-bit/192kHz resolution and DSD files up to 5.6MHz. The DNP-800NE ($599, middle) is a media player with a 32/192 DAC; it incorporates Denon’s HEOS multiroom Wi-Fi streaming as well as Bluetooth and Amazon Alexa skills compatibility. The PMA-800NE ($599, bottom) integrated amp is rated at 85Wpc into 4 ohms (no 8-ohm rating has been published), and has digital and analog inputs as well as a phono input compatible with moving-magnet. 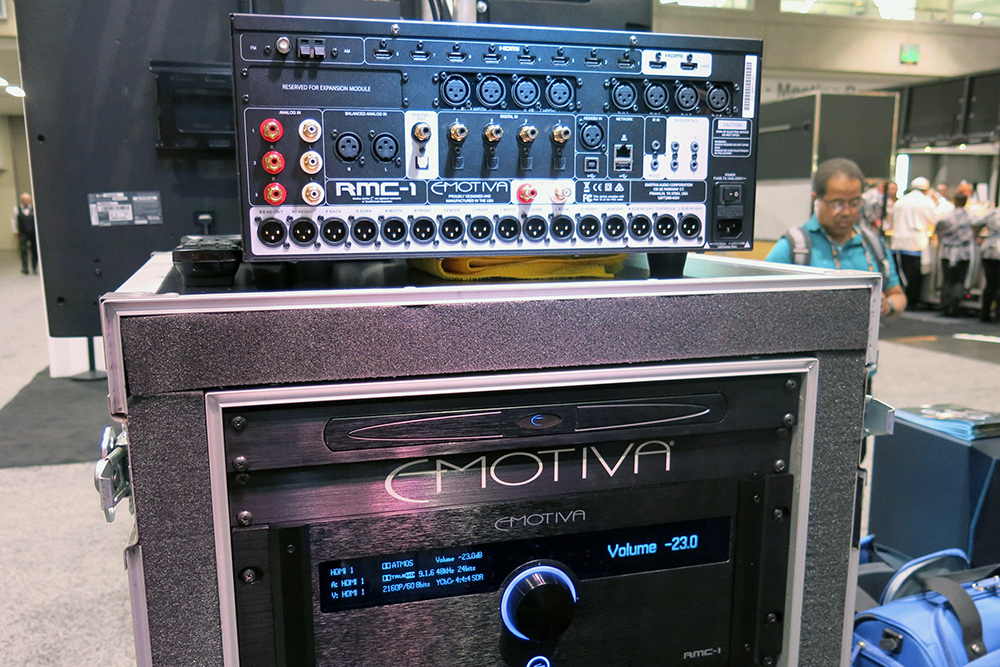 Emotiva’s RMC-1 ($4999) seems poised to become the standard-setter for affordable yet state-of-the-art home-theater processing. Out of the box, it can do 9.1.6-channel sound -- nine front and surround channels, one subwoofer channel, and six overhead channels. It can be expanded for 11.5.8-channel sound. Dirac Live auto room-EQ processing is available for all channels, and there’s an 11-band parametric EQ for each channel. All channels are said to have fully differential balanced output -- i.e., they’re native balanced outputs, not converted to balanced from a single-ended output. The RMC-1 was shown in prototype for a while, but Emotiva says it’s now finally ready to ship. 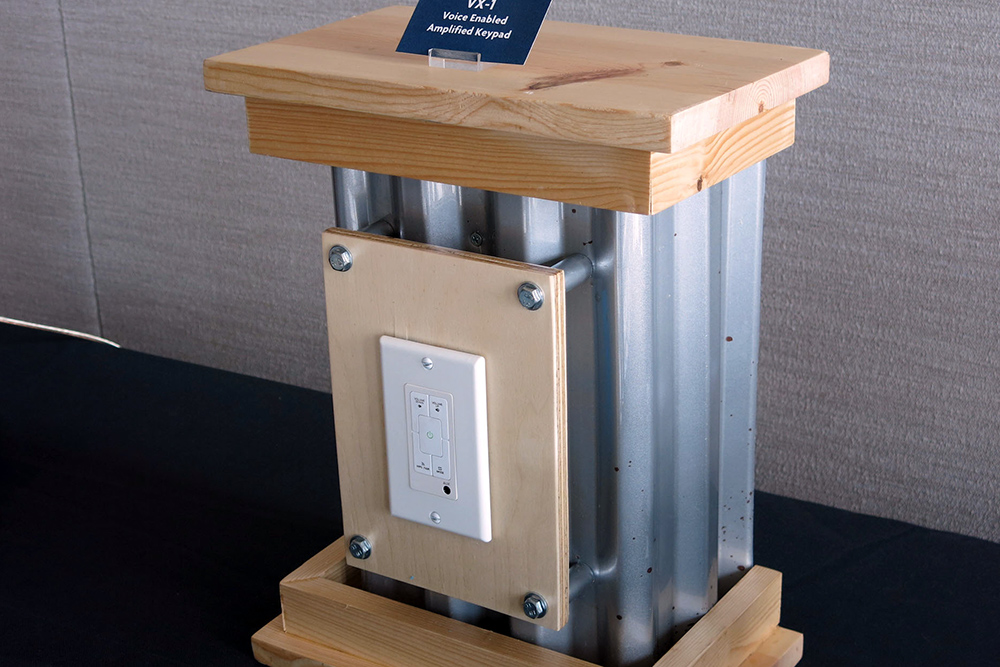 The VX-1 ($199.98) is the only non-speaker product from the reborn KLH brand, which I covered in “Part 1” of my CEDIA Expo speaker report. It’s an amp designed to serve as an easy update for old-fashioned multiroom audio systems that use wall-mounted analog volume controls. It replaces those controls, and the speaker wires that connect to those controls are repurposed as power cables, carrying the power from a separate power supply that connects back at the source end of the system. The VX-1 incorporates a class-D stereo amp rated at 25Wpc, and it has Bluetooth, Wi-Fi, and an analog 3.5mm input built in. The Wi-Fi streaming uses the MTK standard, which can be accessed through a dedicated app. 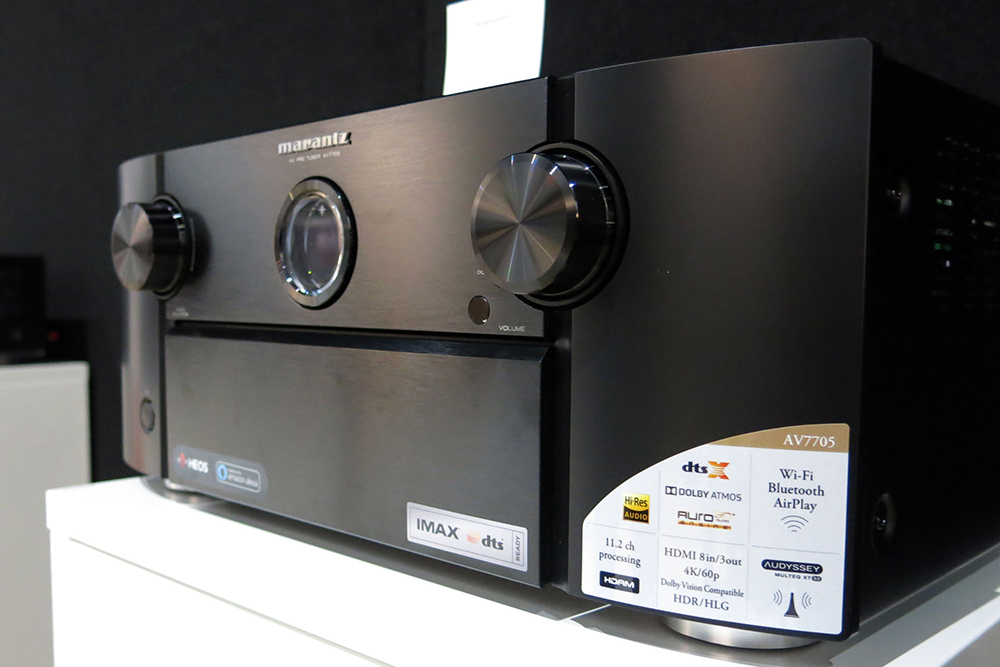 The 2018 CEDIA Expo was full of talk about the new partnership between DTS and IMAX, which combines a certification program for home-theater equipment with special IMAX-produced 4K Blu-ray Discs. But the details are still a little sketchy: “They’re not exposing as much as they need to yet,” an industry veteran whose company is involved in the program told me, and the initial press release contained few details. The IMAX processing will be pushed out in January as an automatic firmware update to select Marantz and Denon components, such as the Marantz AV7705 11.2-channel preamp-processor ($2199) shown here. 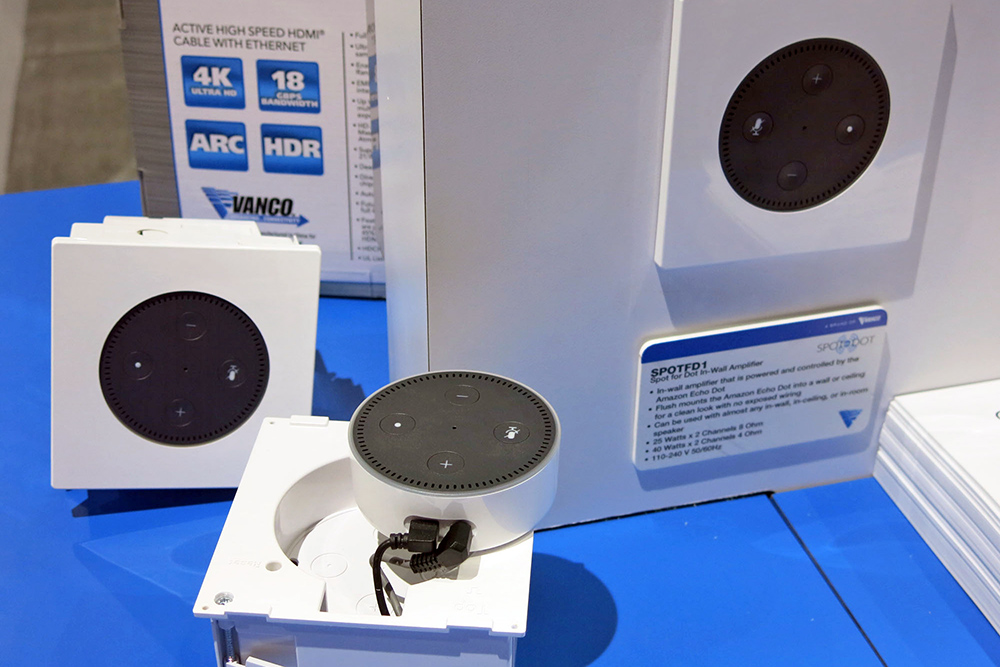 Vanco’s Spot for Dot ($280) converts an Amazon Echo Dot smart speaker into an in-wall sound system. The Dot fits into the front of the two-gang wall plate, and behind it sits a class-D stereo amp rated at 25Wpc into 8 ohms. Connections for the Dot’s USB power input and 3.5mm audio output are built right in. There’s also an extra analog line input, typically used for TV sound. It defaults to the TV’s sound, but if you request something through the Dot, it’ll automatically switch over to that. 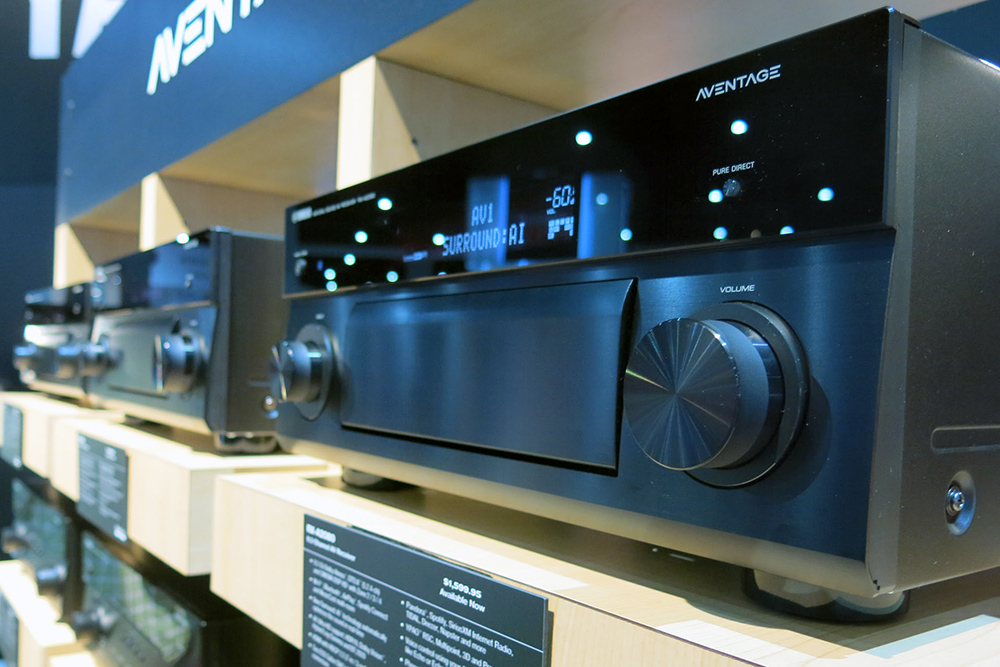 Three of Yamaha’s newest AV receivers -- the RX-A1080 ($1199.95), the RX-A3080 ($1999.95), and RX-A2080 ($1599.95) shown here -- incorporate Surround AI, a new artificial intelligence technology that analyzes the content of an audio program and applies the appropriate surround effects. For example, it can use a surround-heavy, huge-sounding program for big action scenes, then dial down the surround effects so dialog sounds intimate and natural. Surround AI re-examines a soundtrack five times per second, and can even calculate the probability that a scene is about to change. 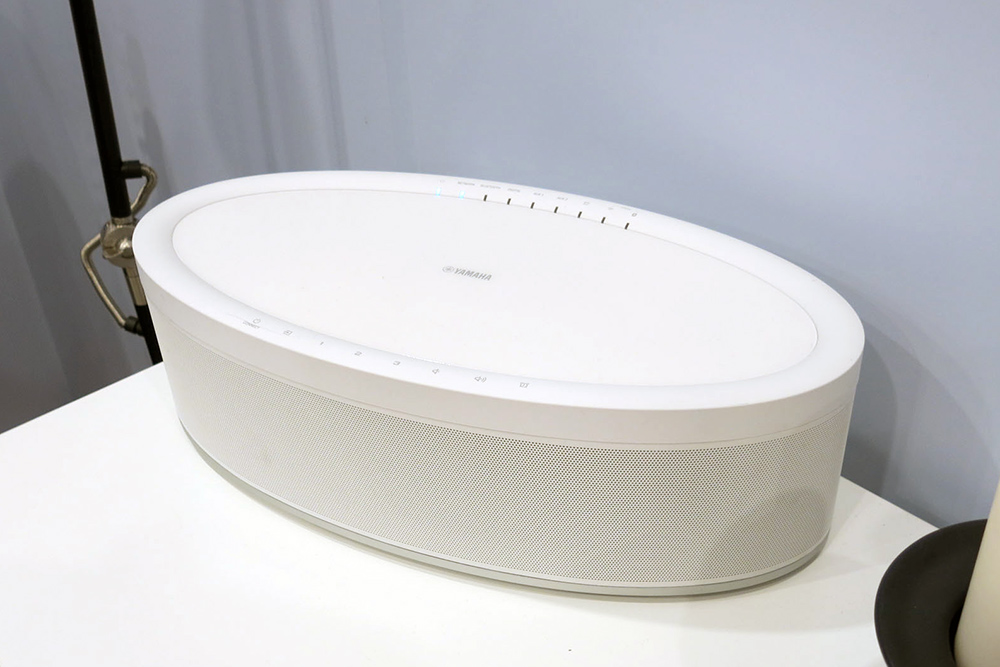 Yamaha’s MusicCast 50 ($499.95) can serve either as a wireless music system or as a one-piece rear surround speaker in a MusicCast-equipped Yamaha home-theater system. Inside are dual two-way speakers in a bass-reflex enclosure. There’s also a smaller, mono model, the MusicCast 20 ($229.95). 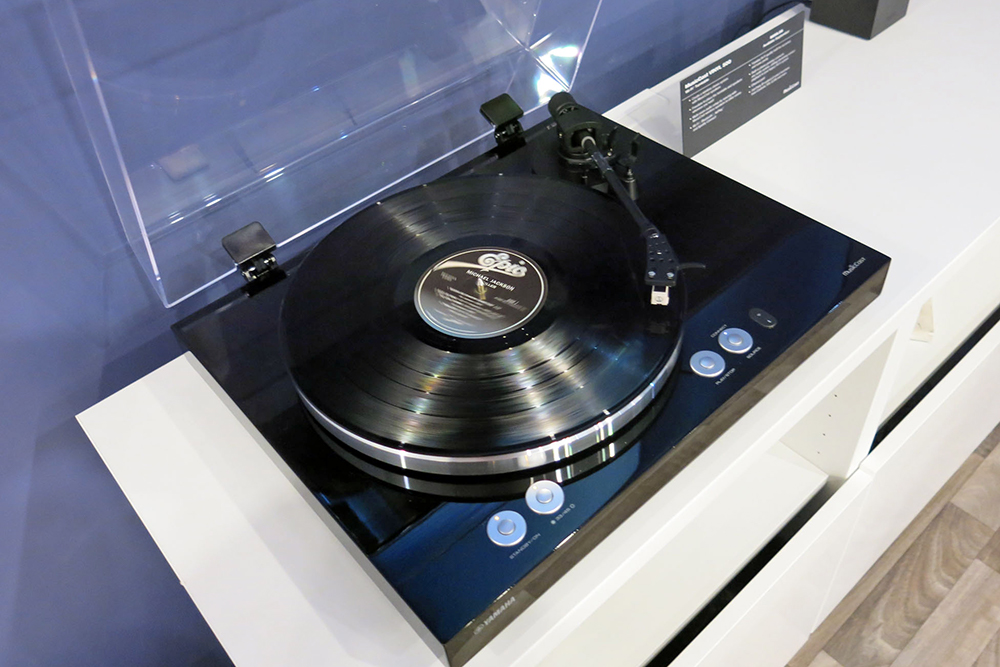 Yamaha’s MusicCast Vinyl 500 ($699.95) might be the world’s smartest turntable. It can transmit its signals through Wi-Fi to receivers, speakers, and soundbars equipped with Yamaha MusicCast, so you can spread the joy of vinyl throughout your home. It’s also compatible with Apple AirPlay, Bluetooth, and Spotify Connect. An Audio-Technica ATN3600L moving-magnet phono cartridge is included.