The annual CEDIA (Custom Electronic Design and Installation Association) Expo focuses on home automation and custom-installed audio/video systems. It’s a hot spot for the introduction of new speakers in the North American market. The focus is on speakers designed for custom installation, but every year the Expo also hosts the launch of several conventional speakers. I’m currently in San Diego attending the 2018 CEDIA Expo, and just in the first day, I’ve seen many new models, including a surprising number of affordably priced mainstream products.

Here’s the first batch of new speakers I found at the Expo, with all prices listed in USD. 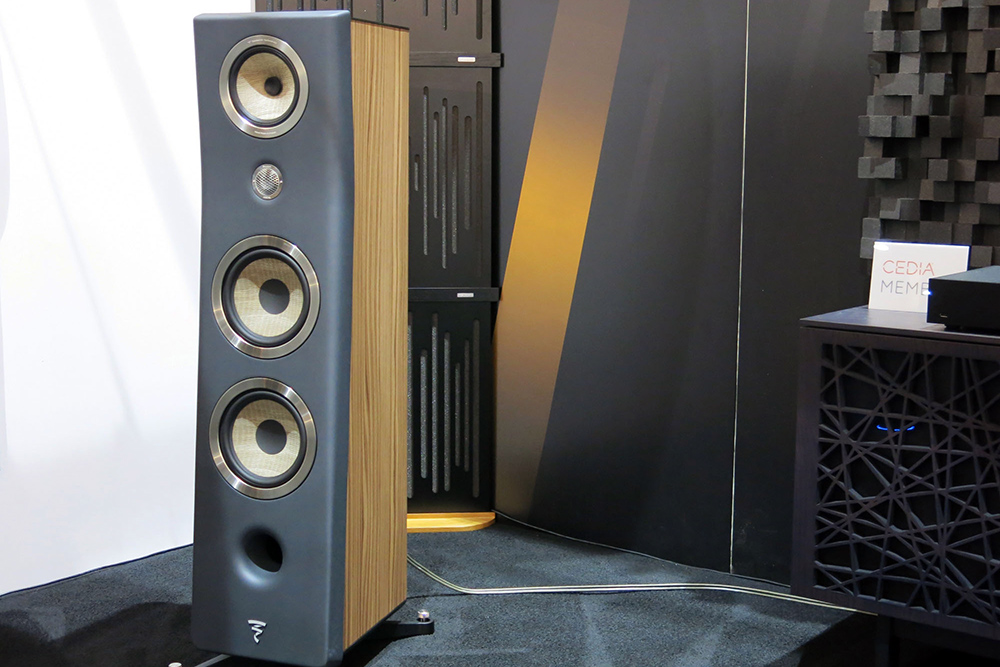 Last October, we reported on the launch of Focal’s Kanta speaker line, but the only model on display was the Kanta No2 tower speaker. At the 2018 CEDIA Expo, Focal expanded the line with three new models. The Kanta No3 ($6000 each) shown here is a large tower speaker with two 8" woofers replacing the No2’s 6.5" woofers. There’s also the Kanta No1 stand-mounted speaker ($3000 each, plus $1200 per pair for optional stands), which has a single 6.5" woofer, as well as the Kanta Center ($3000, plus $600 for the optional stand), with two 6.5" woofers. 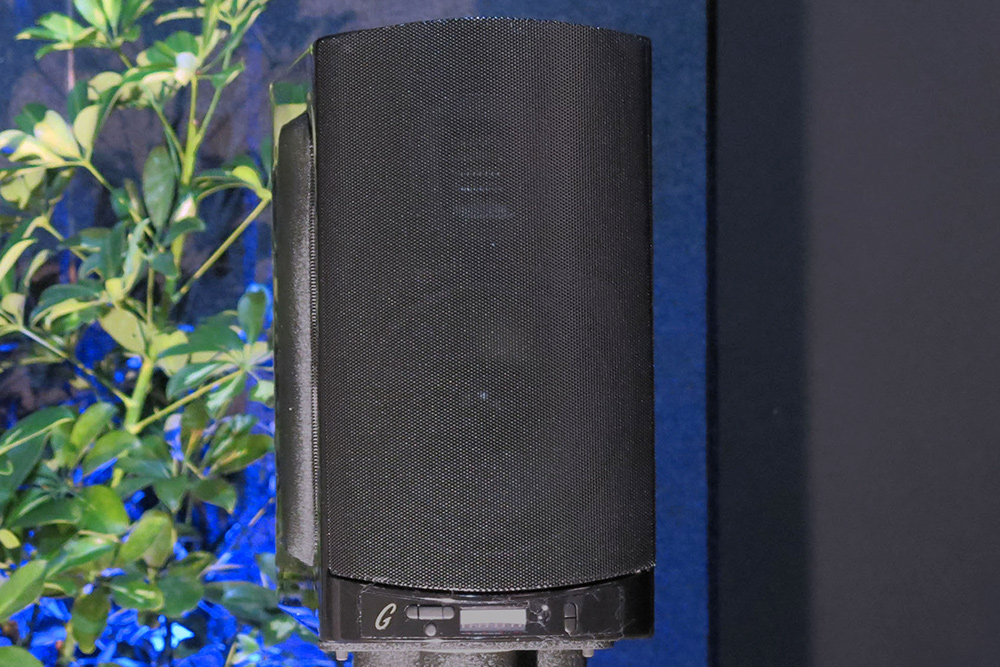 GoldenEar Technology showed a working version of the DigitalAktiv 3 active loudspeaker ($999.99 each), which the company announced at the January CES earlier this year. Each DigitalAktiv 3 has a 6.5" woofer powered by a 200W amp, an HVFR tweeter powered by a 60W amp, and two 8" passive radiators. Bluetooth and Google Chromecast are built in. I was especially impressed with the DigitalAktiv 3’s bass response; I almost started to think there was a subwoofer hooked up, but there wasn’t. The speaker won’t ship until around summer 2019. 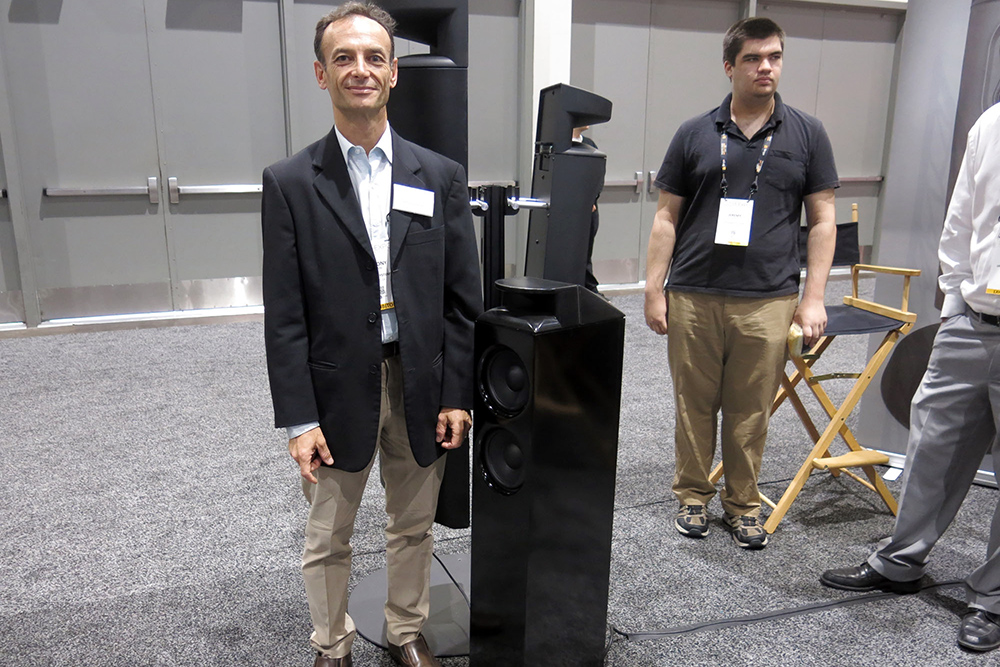 Audio wizard Tony Grimani of Grimani Systems never intended to have a more or less traditional tower speaker in his line: “I thought the tower speaker market was gone, but my dealers tell me it’s not,” he said. The new Tau tower ($9000 each) continues the innovative design twists Grimani uses in his large, wall-mounted speakers. 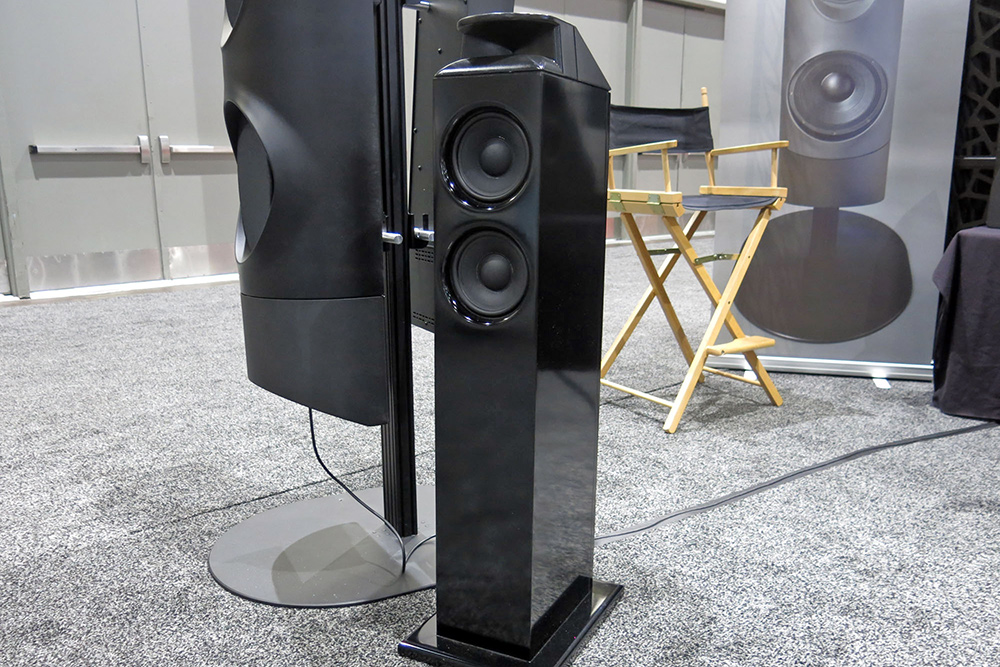 The Tau has two 600W, DSP-equipped amps built in: one for the dual woofers, one for the tweeter. Because the compression-type tweeter can handle low frequencies better than most, it’s crossed over at 1kHz, with a steep 48dB/octave slope. Grimani says the low crossover point and the close proximity of the tweeter and the top woofer allow the Tau to achieve what he described as a “wonderful, open, ‘I’m not listening to a box’ sound.” 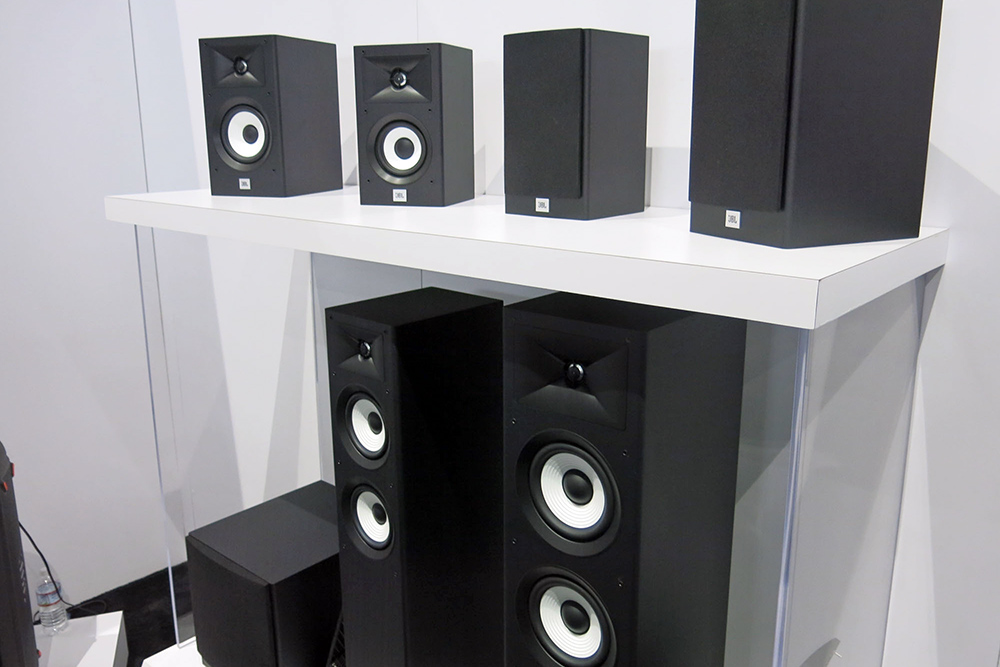 The Stage series is JBL’s new entry line. The white woofer cones are an homage to the company’s classic L100 speaker, which the company relaunched earlier in the year. The line includes three tower speakers, two bookshelf speakers, two center speakers, and 10" and 12" subwoofers. To give you an idea of the prices, the top-of-the-line Stage A190 tower speaker, a 2.5-way model with dual 8" woofers and a single, waveguide-mounted 1" aluminum tweeter, costs $449.95 each, while the Stage A130 bookshelf speaker, with the same tweeter and a 5.25" woofer, costs $249.95 per pair. 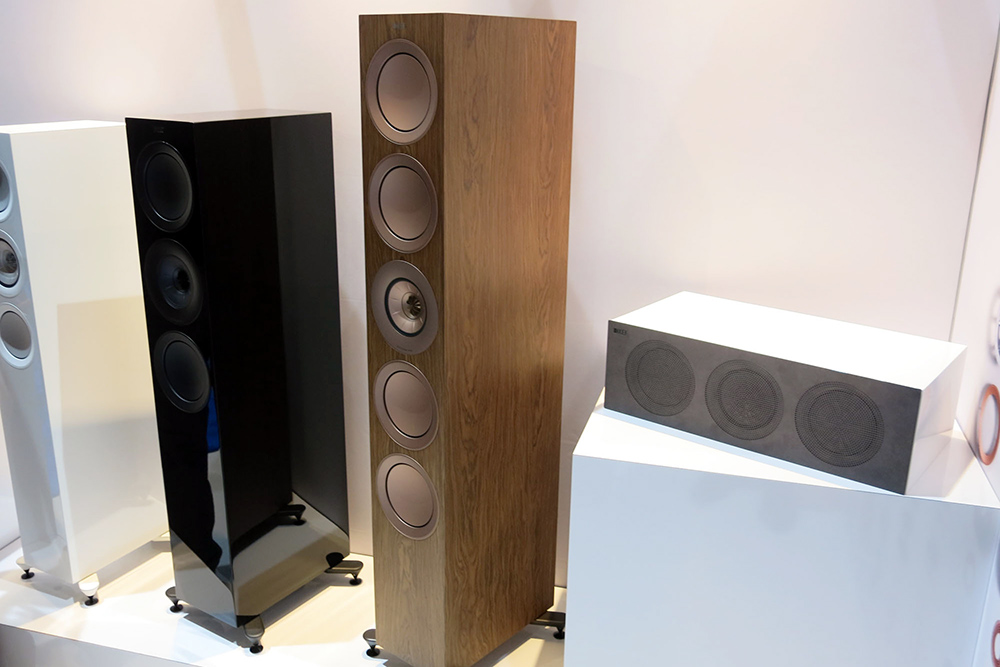 This year’s CEDIA Expo was the first public display of KEF’s completely revamped R Series speakers, with features and design twists that have trickled down from the company’s Reference line. The cabinets are slimmer and more stylish, with a new internal bracing system said to better dissipate vibration. Shown here, from center to left, are the top-of-the-line R11 tower ($2499.99 each), the R7 tower ($1899.99 each), and the R5 tower ($1399.99 each), with the R2c center speaker ($1199.99) at right. The speakers are available in Walnut, Black Gloss, or White Gloss finishes, and have a new magnetically attached grille in a cool suede-textured material. (A new SoundStage! InSight video about the R Series that features lead designer Chris Spear is on YouTube now.) 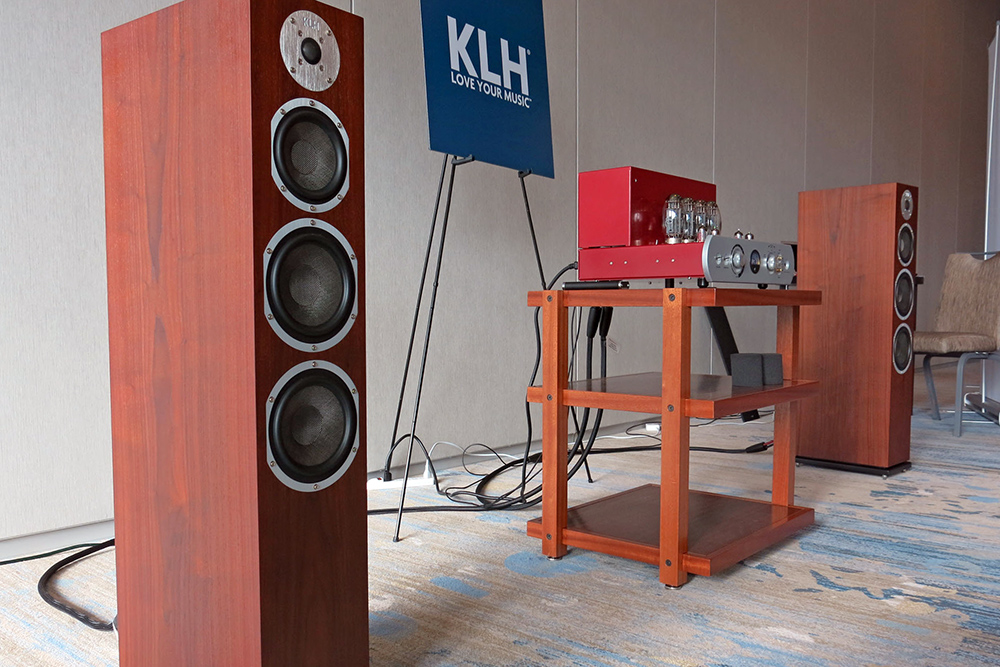 Normally I don’t expect much when someone revives a once-revered audio brand, but the relaunch of the KLH brand at the CEDIA Expo was beyond impressive. I expected to find someone slapping the brand on a few generic Chinese OEM products, but the line of 28 freestanding, in-wall, in-ceiling, and outdoor speakers is the creation of former Klipsch global sales president David Kelley and a team of veterans with decades of experience at such brands as Klipsch, Polk, Definitive Technology, and Carver. The flagship speaker is the Kendall tower ($1299.98 per pair) shown here, which had a neutral, open sound that reminded me of my Revel Performa3 F206 tower speakers. Each Kendall packs two 6.5" woofers, a 5.25" midrange, and a 1" aluminum-dome tweeter. The line will be available through brick-and-mortar audio dealers as well as through Crutchfield.