I’m pretty sure the CEDIA Expo is the number-one venue for the launch of new architectural speakers -- the in-wall, in-ceiling, and outdoor models used by custom installers and DIYers seeking a stealthy way to spread sound all around a home. Admittedly, the competition for “best in show for in-wall speakers” isn’t particularly intense, but still . . .

Most of the speaker companies at the 2018 CEDIA Expo in San Diego showed new architectural models. Many were pretty generic -- a woofer and tweeter mounted in a flush-mount faceplate, or enclosed in a waterproof plastic cabinet. But several showed real creativity, and a few provided ways that even serious audiophiles can get sound they’ll love from speakers they can barely see. Here are the most interesting architectural speakers I found at CEDIA, with all prices in USD. 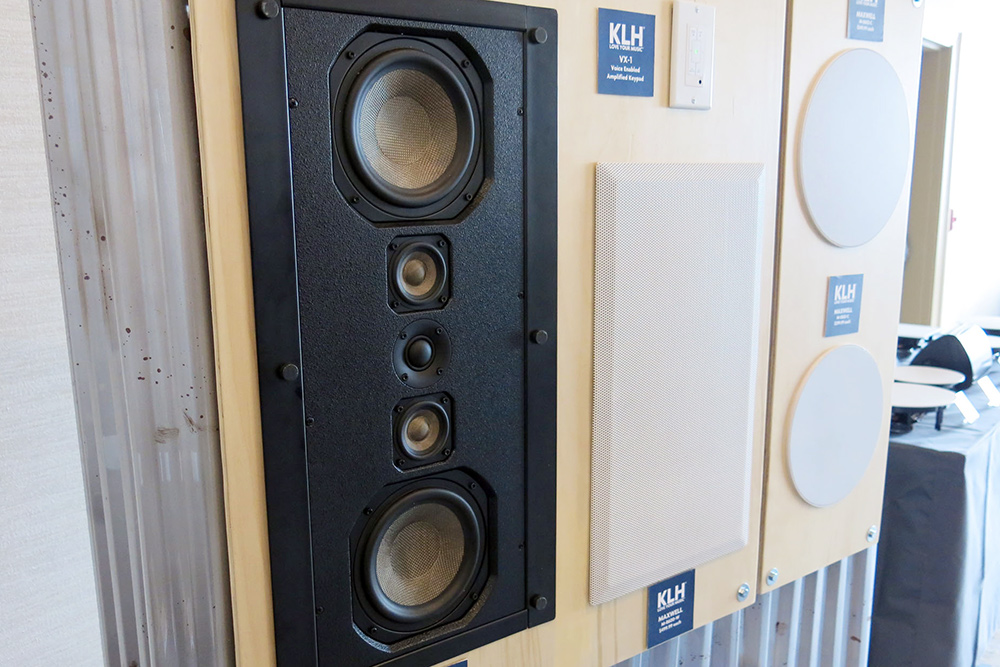 Part of the surprisingly robust rebirth of the KLH brand, covered in our “CEDIA Expo 2018: Speakers, Part 1” article, is a new line of in-wall speakers. Most impressive was this new high-end in-wall model, the Maxwell M-8650-W, which packs two 6.5" Kevlar/fiberglass woofers, two 2.75" Kevlar/fiberglass mids, and a 1.1" silk-dome tweeter, and has an integral back box. Most high-end in-walls of this general configuration that I’ve seen cost somewhere around $2500 each, but the Maxwell goes for just $649.99 each. 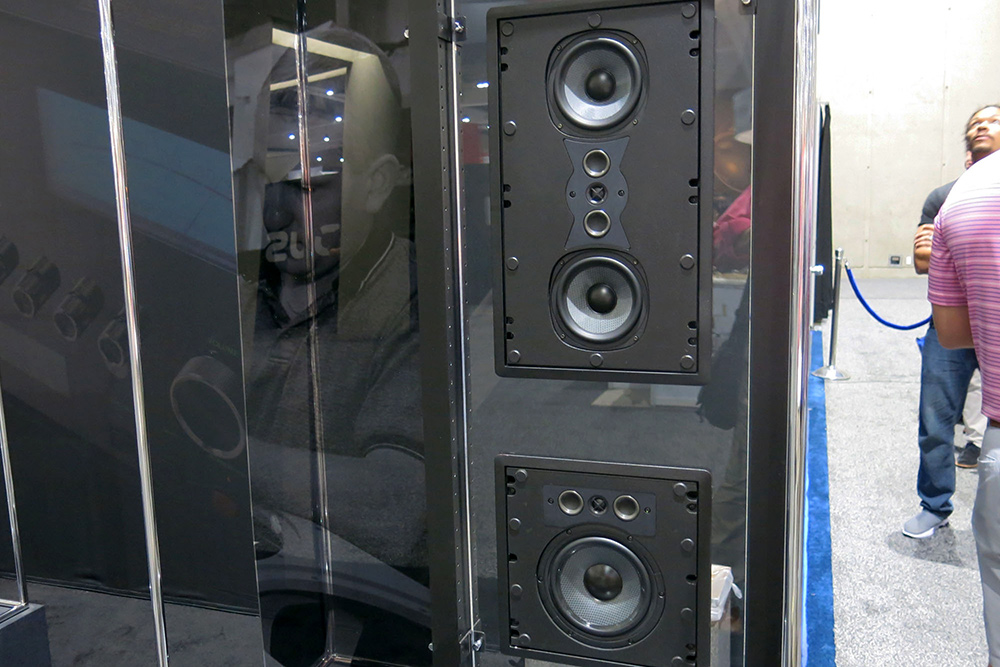 McIntosh’s big story at the 2018 CEDIA Expo was a refresh of its in-wall speaker line. The goal was, as McIntosh regional sales director Bart LoPiccolo put it, “architectural products that can handle true home-theater power.” All models have integral back boxes, and use drivers that are for the most part borrowed from the company’s freestanding speakers. The WS500 shown here at top (estimated price $3000 each) has two 6.5" woofers flanking a midrange-tweeter-midrange array top and bottom. Below the WS500 is the WS300 (estimated $2500 each), which has an 8" woofer alongside the same MTM array. The WS300’s design allows it to be used vertically for left, right, and surround channels, or horizontally as a center speaker. A smaller in-wall and an in-ceiling model will also be available. 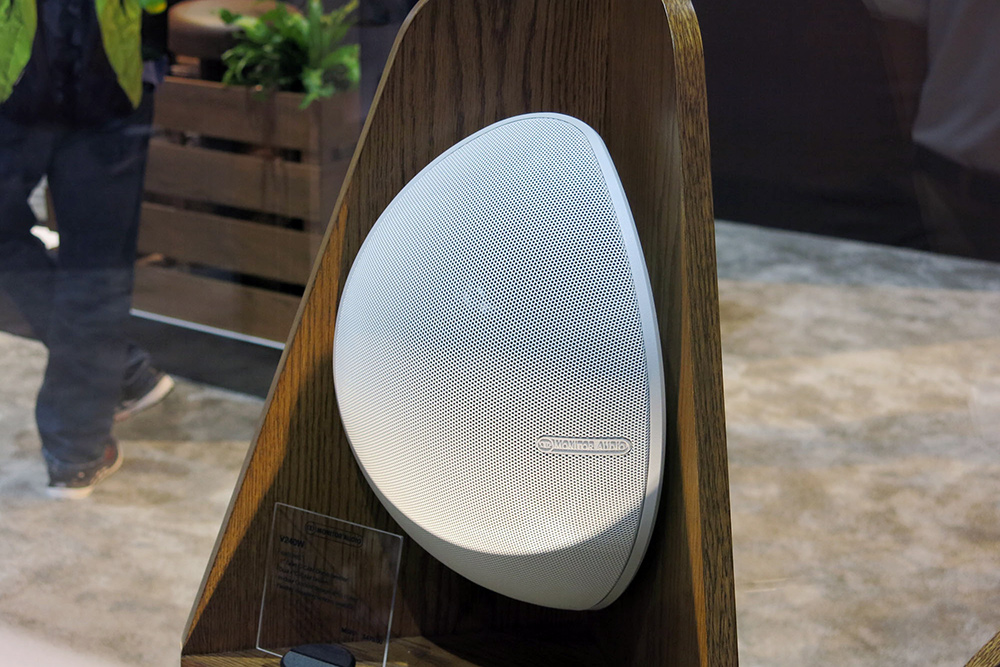 Monitor Audio’s new V240W ($475 each) is a refreshingly new take on the outdoor speaker. It mounts in any 90-degree corner, vertically or horizontally, and it carries an IP55 ingress protection rating, meaning it’s water- and dust-resistant. It uses the same kinds of drivers found in most of Monitor’s indoor speakers, including a single 1" gold C-CAM tweeter and two 4" C-CAM woofers. So if you’re inclined to use it as a surround or stereo speaker indoors, feel free. 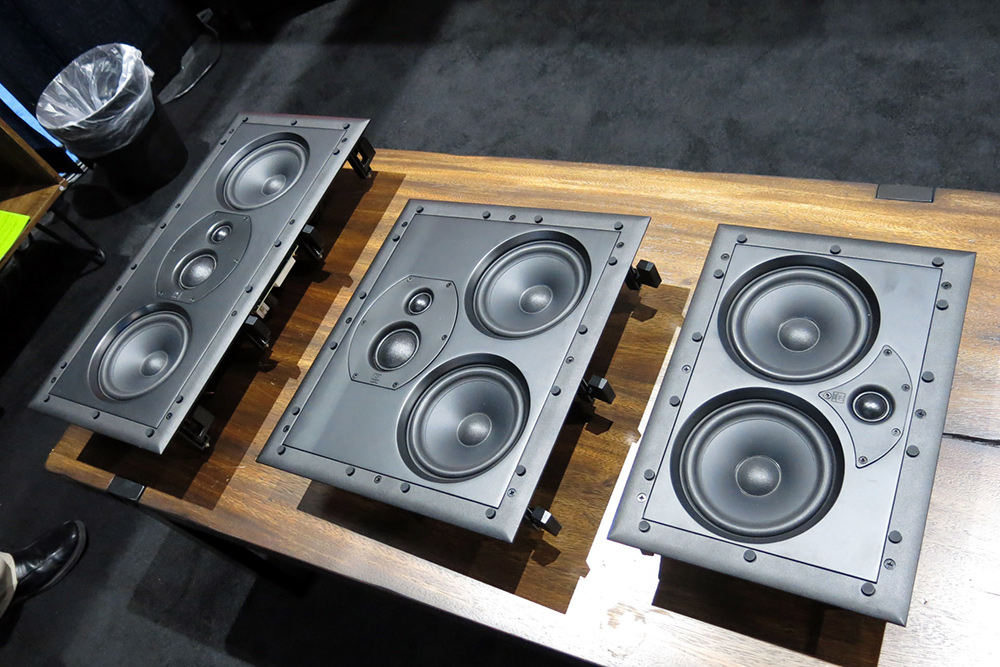 Monoprice’s latest in-wall speakers come in at very affordable prices for something that’s fairly certain -- considering their THX certification -- to deliver powerful, clean in-wall sound. The THX Ultra 3-Way speaker ($399.99 each) comes in two varieties: one with its two 6.5" woofers flanking a midrange-tweeter array top and bottom (shown at left), and another with the two 6.5" woofers to the side of the midrange-tweeter array (shown in middle). The THX Select 2-Way speaker ($299.99 each, shown at right) has two 6.5" woofers and a 1" tweeter. All have metal frames, metal “dogleg” mounts, and magnetically attached grilles. 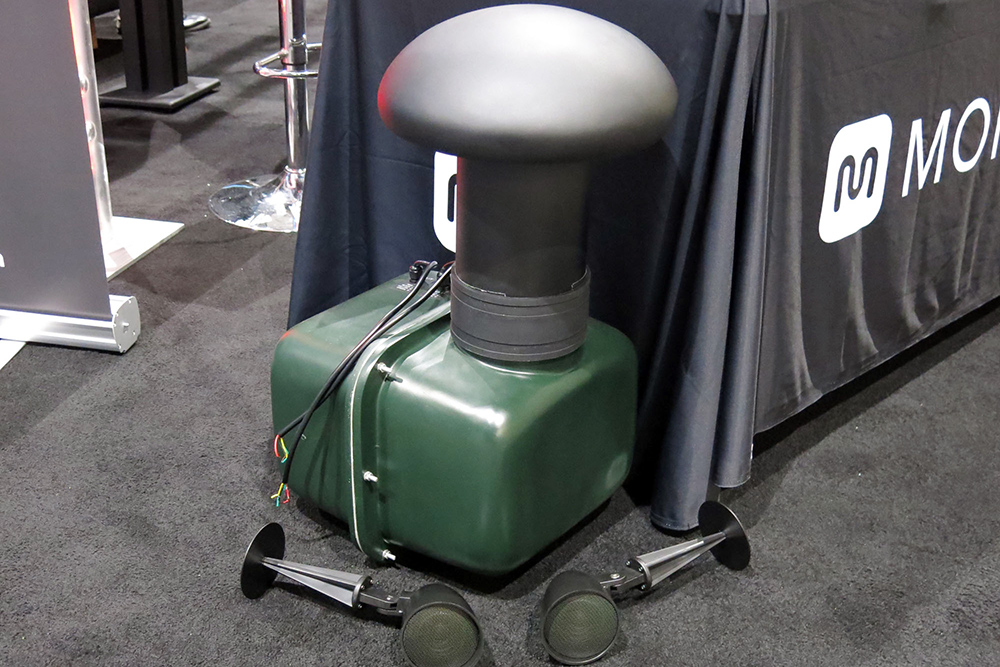 Subwoofer-satellite systems have had a big impact on outdoor sound of late. Most include a “burial sub” that lives mostly underground and vents through a mushroom-shaped port. This way, the satellite speakers can be small, and you can use multiple satellites playing at a relatively low volume to cover large spaces instead of using just a couple of speakers and playing them very loud. Most of these sub-sat systems cost thousands of dollars, but Monoprice’s Sycamore Outdoor 2.1 system costs just $229.99 for one sub and two sats; an extra pair of sats costs $34.99. The subwoofer has an 8" driver, while each satellite uses a 2.5" full-range driver. 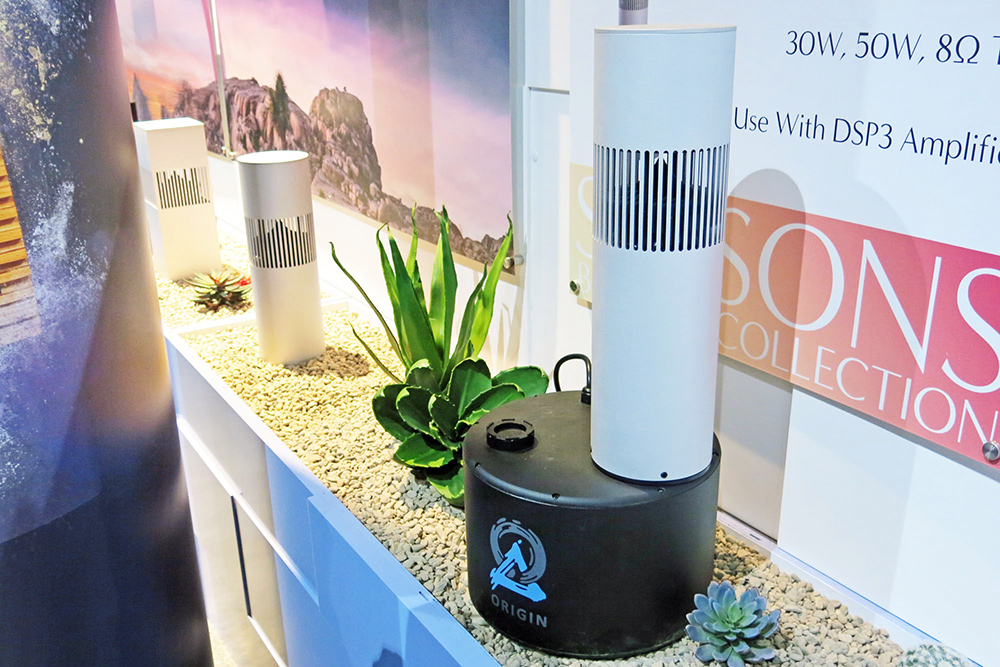 Origin Acoustics’ Seasons Bollard outdoor speaker ($1750 each) represents a rethink of the outdoor speaker concept. The bottom section is intended to be buried; it contains a 6.5" woofer that vents through the top bollard section. At the top of the bollard is a down-firing coaxial driver with a tweeter centered in the middle of a 4.5" midrange. The Seasons Bollard disperses sound 360 degrees, and also comes with an insert that limits the dispersion of the down-firing driver to 180 degrees. It’s available in round or square bollard shapes, in silver, black, or bronze. I was amazed to hear how loud, clear, clean, and neutral the Seasons Bollard sounded in the Origin Acoustics booth. 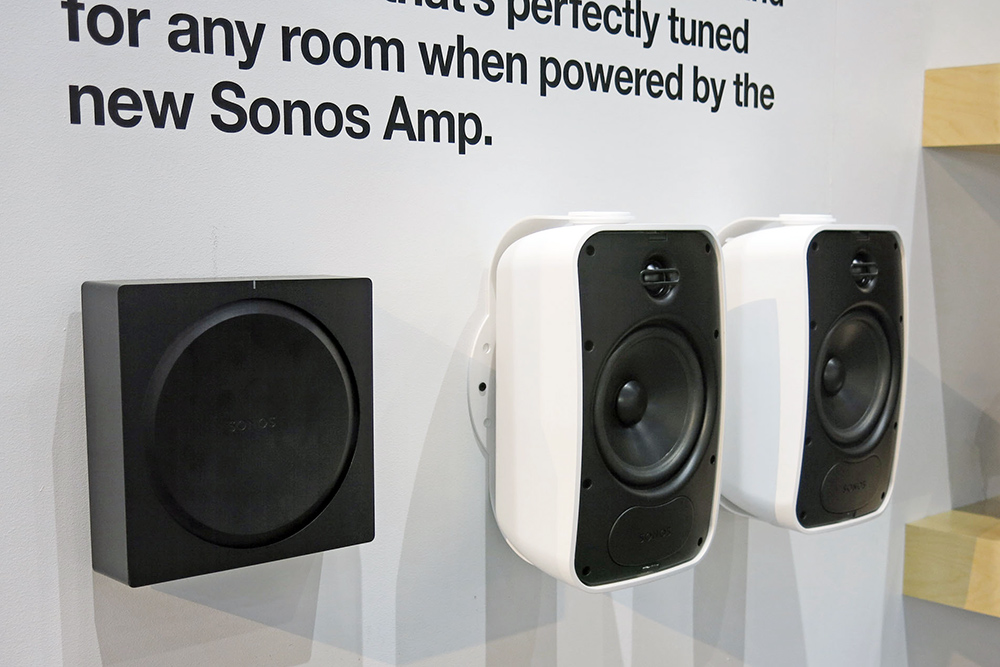 Sonos and Sonance used the 2018 CEDIA Expo to announce an innovative collaboration that has the potential to deliver truly outstanding sound from architectural speakers. Sonance is building three speakers -- in-wall, in-ceiling, and outdoor models -- specifically to work with the new Sonos amp ($599) shown here. The amp incorporates Sonos’s Trueplay smartphone-based auto room EQ technology, and because Trueplay is programmed with the performance characteristics of the Sonance speakers, it can deliver the best possible performance from them. Prices for the new speakers haven’t been announced yet. 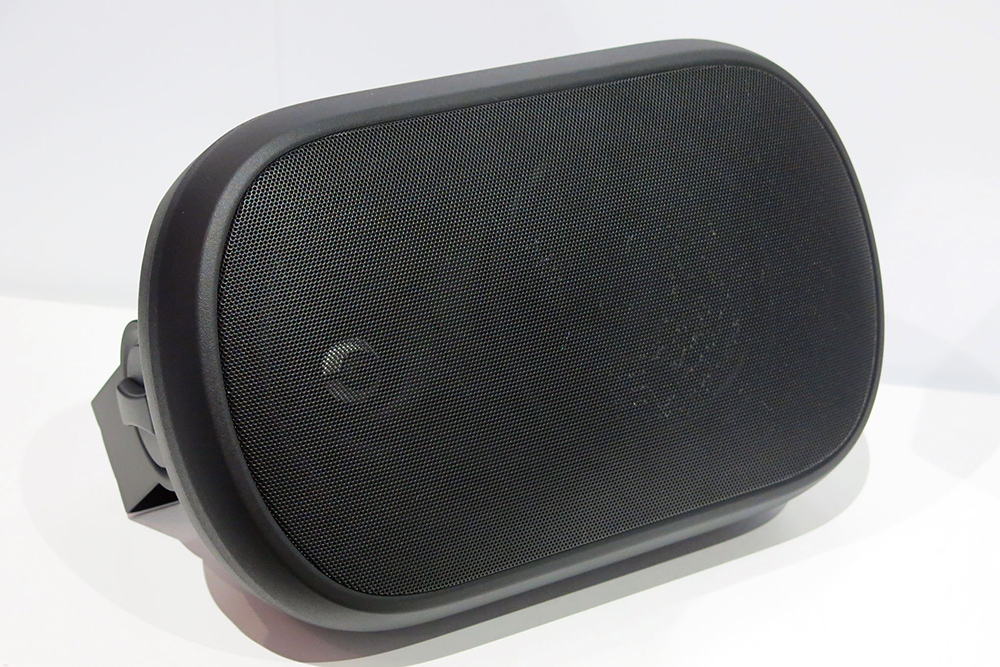 Totem Acoustic’s first outdoor speaker doesn’t have a name or price yet, but it’s expected to retail for about $800 per pair. Each one has a 6.5" carbon-fiber woofer and a 1" ceramic-coated aluminum-dome tweeter, both packed into a weather-resistant enclosure that looks sleeker and more elegant than most outdoor speakers. 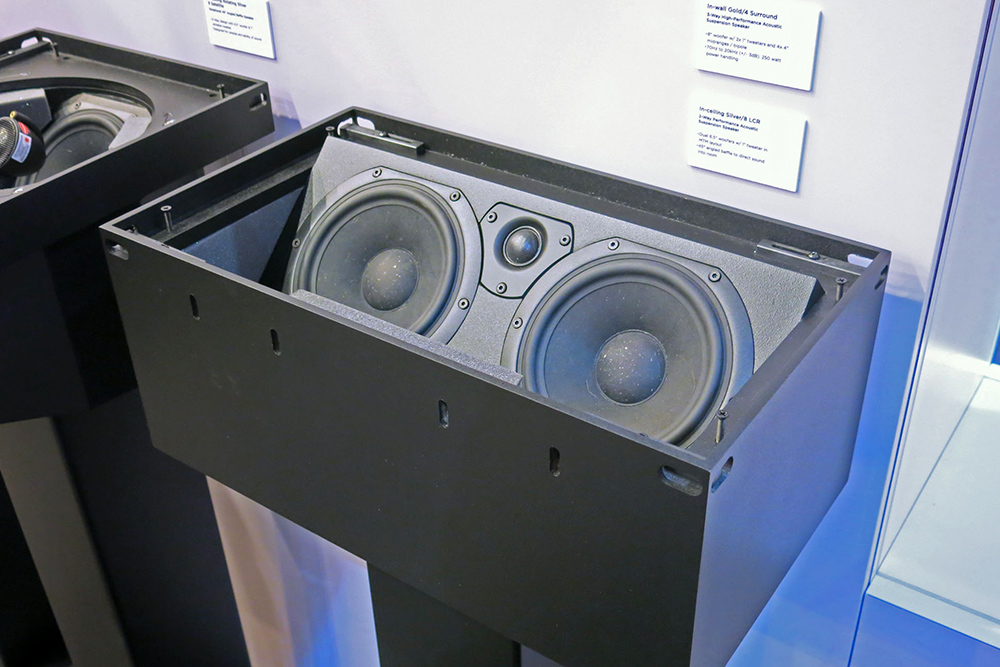 Triad Speakers’ InCeiling Silver LCR ($1000 each) is an in-ceiling version of its popular Silver LCR freestanding speaker. According to Triad, the 6.5" woofers, 1" tweeter, crossover circuit, and box volume of the InCeiling Silver LCR are the same as the in-room version. Even the Silver LCR’s complex internal bracing, including computer-cut MDF and rubber panels, is replicated in the InCeiling version. The company will paint the speaker’s grille any color you want; you can specify a commercial paint color or even send them a piece of painted drywall, and the speakers and grilles will be made to order in four days.