Since I travel to so many hi-fi shows around the world, I often get asked for my opinion about each one. In fact, right now I’m in Warsaw, Poland, getting ready to cover Audio Video Show 2022, which will run from October 28 to 30.

As I was traveling here, I recalled a conversation I had a few days ago when I went to Toronto Audiofest 2022. One of the exhibitors there asked me what Warsaw’s annual Audio Video Show was like in terms of the locations. He’d heard that it wasn’t in just one place, so he wanted to know what and where the locations are, as well as, if his company were to exhibit, what the best one would be. 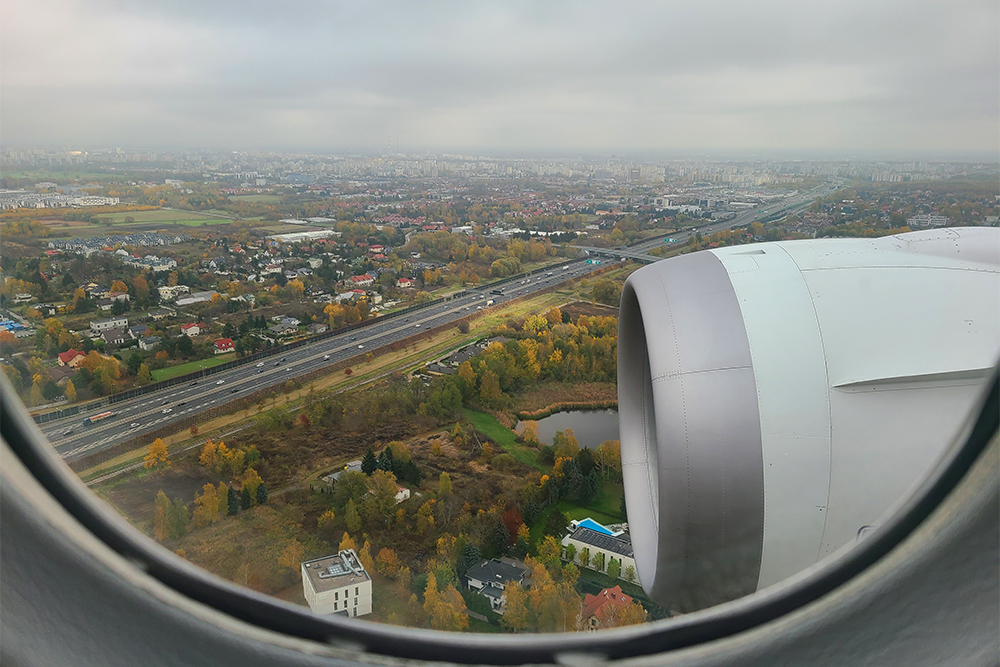 I explained it all to him, but on the plane to Warsaw I realized that many other people would probably want to know this as well. Therefore, this pre-Audio Video Show 2022 article is intended to explain the layout of the event so you can better understand the show—and our show coverage. All the pictures within this article were taken today, Wednesday, October 26, as fellow writer Jason Thorpe and I walked around Warsaw for a little sightseeing before beginning our coverage of Audio Video Show 2022 on Friday.

Audio Video Show is held in three locations, with two that are hotels: the Radisson Blu Sobieski and the Golden Tulip Warsaw Centre. The other location is Stadion Narodowy, which, due to a sponsorship agreement, is better known as PGE Narodowy. PGE Narodowy stadium is used mostly for soccer and concerts, but for Audio Video Show 2022, most of the box suites are emptied out and turned into showrooms for audio and video gear. Frankly, incorporating this stadium into the show many years ago was a genius move by show owner Adam Mokrzycki, because it makes it so unique. 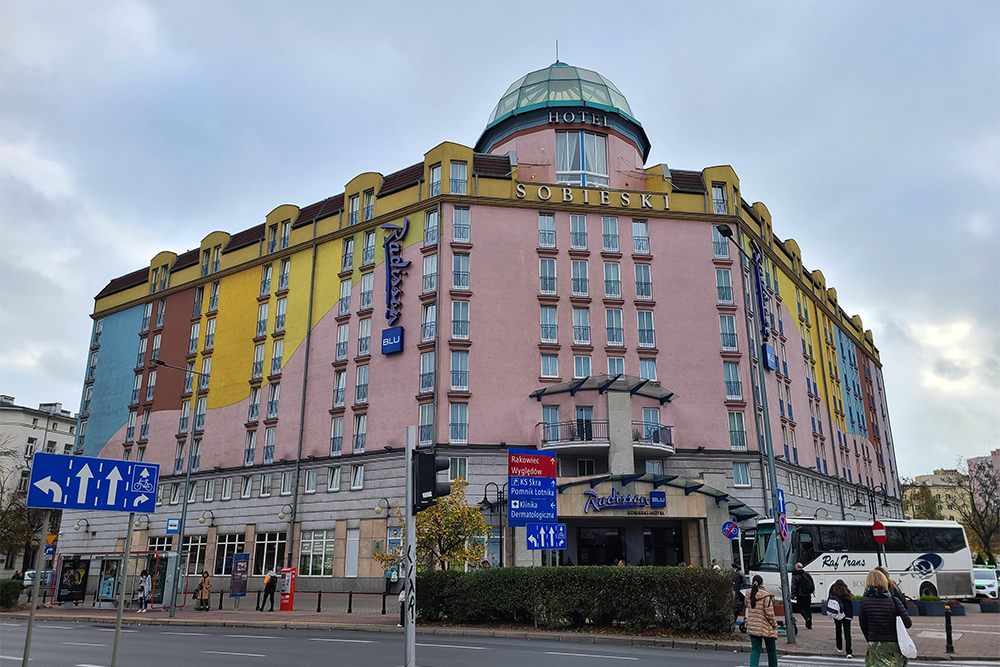 The Radisson Blu Sobieski happens to be where I’m staying—and where I’m typing these words right now. To get to the Golden Tulip means going down to the Radisson’s lobby, exiting through the front door, and walking about 800 feet (244 meters) down a single street—so the two hotels are fairly close to each other. 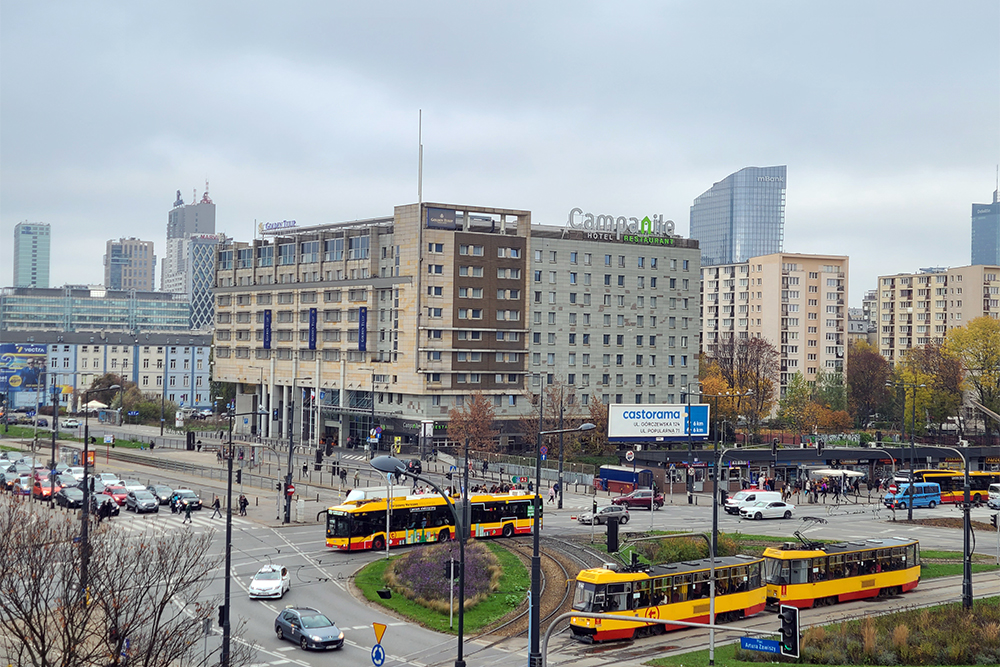 The number and sizes of exhibit rooms differ at the three places. The other day I asked Mokrzycki to give me some figures about that.

He told me that for 2022, there will be about 90 exhibitor rooms at the Radisson Blu Sobieski, almost ten at the Golden Tulip, and around 60 at PGE Narodowy. Those numbers seem to be in line with what I recall from previous years, including 2019, the last year this show was held before COVID-19 put a stop to it in 2020 and 2021. 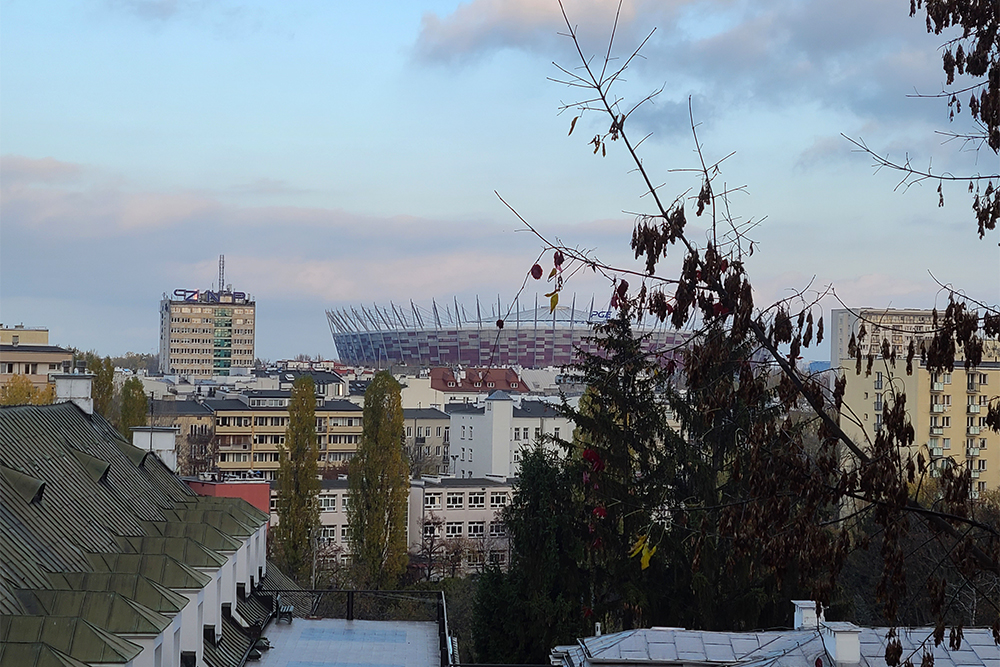 PGE Narodowy in the distance from near downtown

The Radisson can be considered the biggest location insofar as room numbers go, but square footage tells a different story. According to Mokrzycki, around ten percent of the total exhibit space is at the Golden Tulip, and the remaining 90 percent of the exhibit space splits fairly evenly between the Radisson Blu Sobieski and PGE Narodowy. That’s because the rooms at the Radisson Blu Sobieski, which are a mix of hotel rooms and hotel conference rooms, are, on average, much smaller than at PGE Narodowy and the Golden Tulip. So while the stadium trails the Radisson a bit in quantity, it makes up for it in room-size quality. Furthermore, the Golden Tulip has some of the largest rooms, because they’re mostly large hotel conference rooms—there just aren’t that many.

Since we focus on product coverage, we need to go room by room, so the quantity of rooms and exhibitors dictates how much time we must spend at a given location. Based on previous years, I suspect we’ll be at the Radisson for about a day and a half, PGE Narodowy for a day, and the Golden Tulip for a few hours.

But also know this—even though we’ll visit every location, we likely won’t be able to cover every new product at Audio Video Show 2023. In previous years, there have always been too many new products to cover in just three days, so I suspect it’ll be the same this year.

People often ask me which location is the best if they’re simply attending and can only go to one. There’s no easy answer, though obviously PGE Narodowy and the Radisson Blu Sobieski, since they have most of the exhibits, should be the priorities. But truth be told, someone must visit all three locations to make sure they won’t miss anything. Even though the Golden Tulip is ranked lowest in terms of number of rooms and overall square footage, we’ve seen some amazing products there in past years. 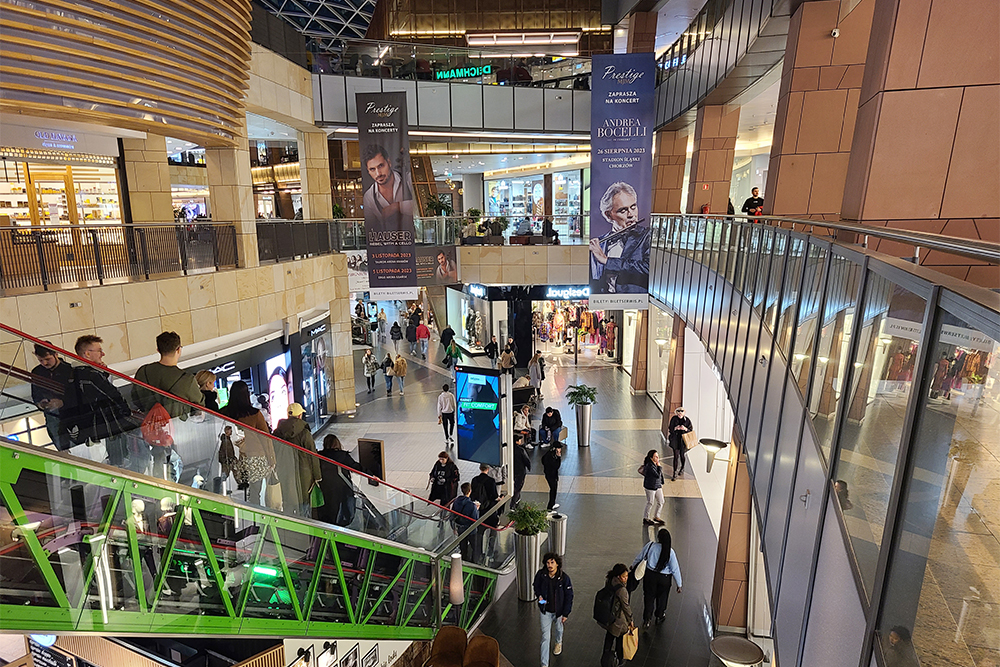 As I mentioned, the exhibitor I was talking to in Toronto asked me about the best place to exhibit, but I told him that I couldn’t really answer that because they differ so much. Someone really must see the entire show to know which location would be the best for their company.

For example, the Golden Tulip may have the fewest rooms, but they’re mostly very large rooms, so those spaces are advantageous for, say, big speakers. At PGE Narodowy, the rooms are quite big as well, so you often see big speakers and lots of products in the rooms there. Then there’s the Radisson, where most of the rooms are. There aren’t many big rooms at the Radisson, and the exhibits are more crammed together, giving that location a typical high-end-audio-show-in-a-hotel feel—which is exactly what it is—but it’s almost always busy, which is a good thing. On the other hand, that density of exhibitors means they’re all competing for the attention of the attendees, so it’s harder to stand out. Suffice it to say that there are pros and cons for each location.

There’s one more thing I need to say to fully understand the Audio Video Show event—Warsaw is a great city to have it in, and it helps to give this show its flavor. I’ve been attending this show since 2016, which is when Adam Mokrzycki invited me and some other journalists to see it. None of us had any idea that the show was as large and well-attended as what we witnessed then. Our show reports were glowing, and most of us came back in subsequent years. 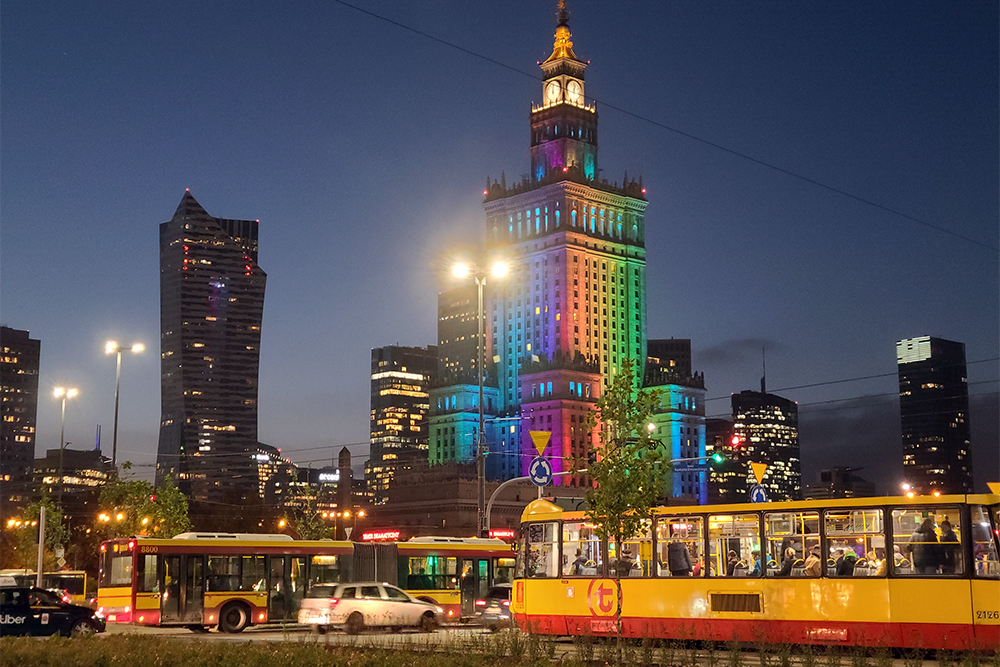 But it wasn’t only the show we liked so much—Warsaw is fun to visit, with a delightful mix of old and new architecture, fascinating sights to see, surprisingly good shopping, and generally low prices for good hotel rooms and great food. In fact, Jason and I just got back from a restaurant where we each had a gourmet burger, fries, and beer that was better than we usually get back home—and for less money. 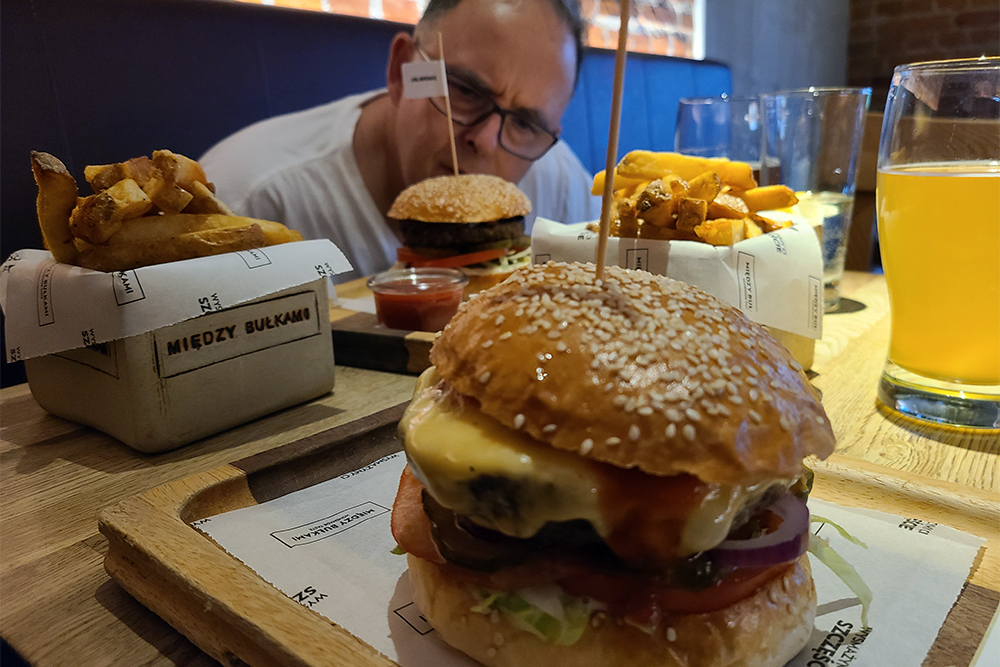 If you don’t like burgers and fries, there are dozens of other places with all kinds of food types within walking distance of the Radisson Sobieski and Golden Tulip that you can go to as well. Without question, Audio Video Show is an event that should be high on any hi-fi showgoer’s list.