On Saturday, the second day of Audio Video Show 2018, we went up and down the floors and back and forth through the halls of Warsaw’s Radisson Blu Sobieski, which is where we stayed and where most of the exhibits from smaller manufacturers were positioned. Here we found numerous electronic components, which Jason Thorpe focused on that day, and many more loudspeakers -- my main beat. Below is the second part of my loudspeaker coverage; you can read “Part 1” here. Prices are in Polish zlotys (zł), euros (€), US dollars ($), or British pounds (£). 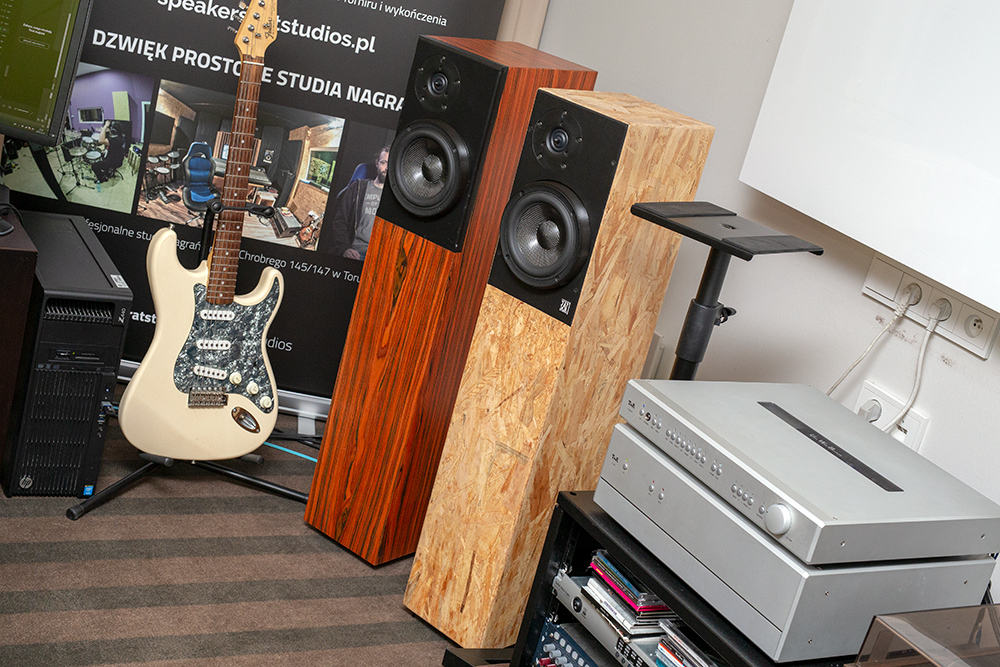 RATstudios (yes, that’s the brand name) showed off the new Callisto TC, a zł5000-per-pair loudspeaker made in Torun, Poland. RATstudios can finish in any color or any wood veneer for the same price, as shown on the left speaker. On the right is a special-order Callisto TC finished in rough building-grade OSB wood, which is apparently very difficult to work with. But that’s what the customer ordered, so that’s what was built. The company’s background is in producing recording monitors, and this pedigree was immediately evident based on the immediate, detailed sound of the Callisto TCs. 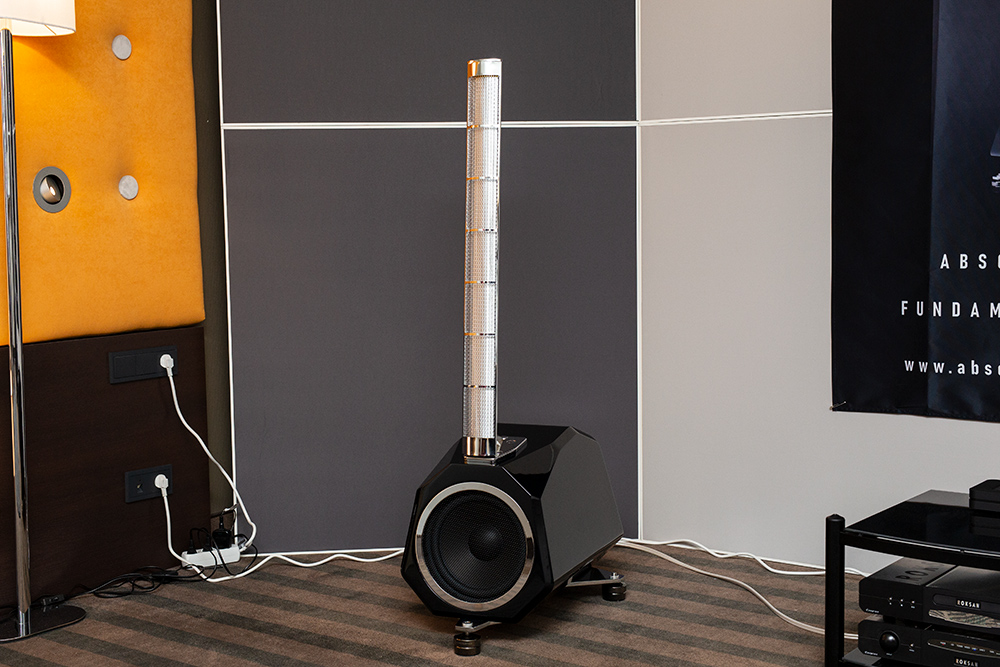 Finland’s Hypostatic showed the visually dazzling Indigenum hybrid speaker. The narrow upper panel is a type of ribbon that the company describes as a “curved magnetostatic driver,” which is . . . 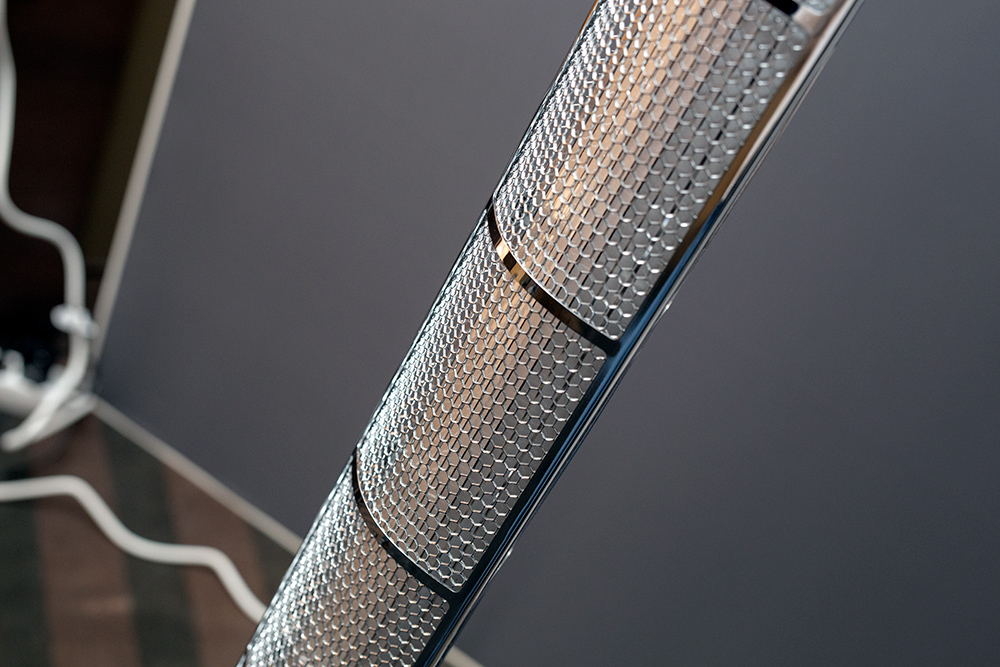 . . . aluminum foil etched with a voice coil and driven by a line magnet. The ribbon plays from 500Hz up, while the 11" woofer and its rear-facing 11" passive radiator work on the frequencies below. The cabinet is made from synthetic stone, and Hypostatic can finish the Indigenum in any colour you like. The Indigenum retails for zł119,476 per pair. 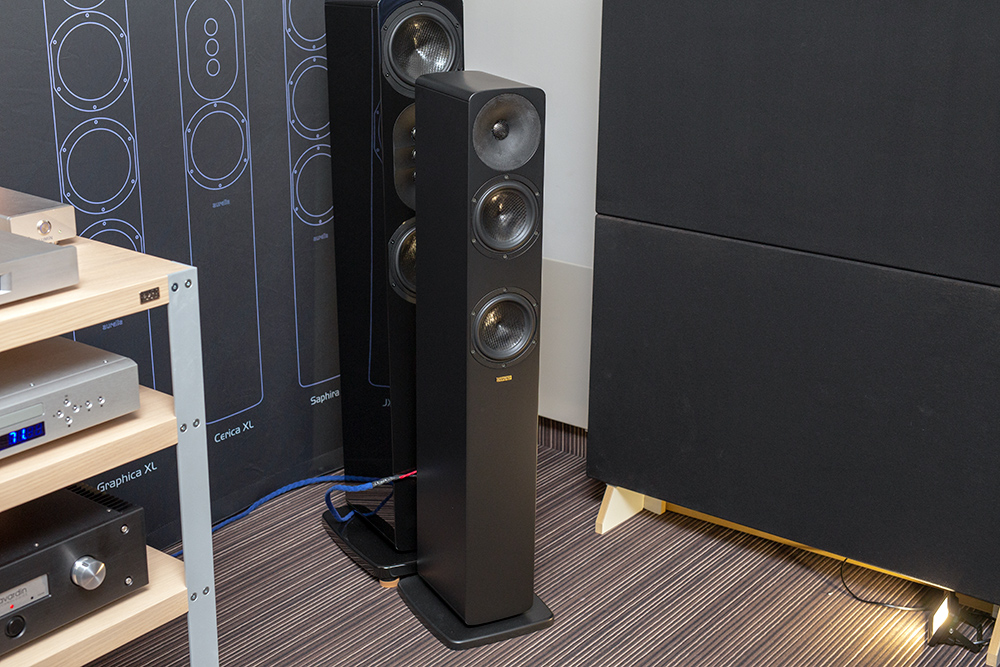 Finland’s Aurelia demoed its new Ambera II, a three-driver, two-way speaker that features a new midrange-woofer design. The two midrange-woofers cross over to a 1" waveguide-mounted tweeter at about 1800Hz. The Ambera II offers a nice, easy 8-ohm impedance. And it retails for a reasonable €2500 per pair. Our short listen (we always move at a rapid pace at shows) revealed a quick, crisp presentation. Aurelia offers the Ambera II in satin black or white finishes. 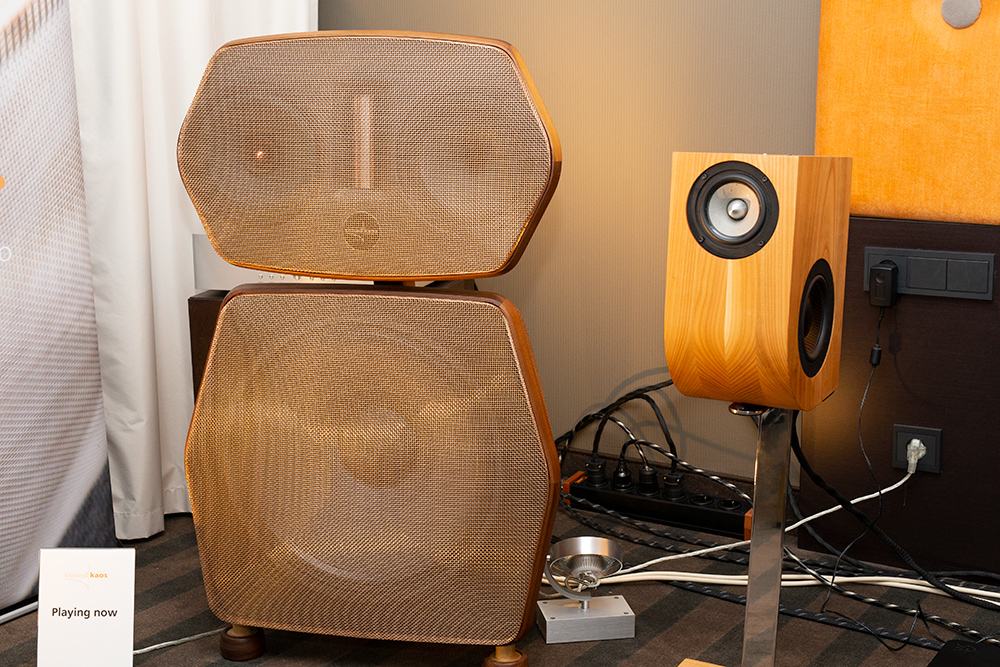 Some speakers are so unique they jump out at you. Looking vaguely avian, the Soundkaos Libération speaker (left) runs three open-baffle drivers -- an 18" woofer from Beyma of Spain, along with two open-baffle midranges, one of which is fitted with a whizzer cone so that it can reproduce higher frequencies than the other. Complementing the top end is one ribbon tweeter right where the bird’s beak would be (it looks a bit like an owl to me). The grilles, which come off . . . 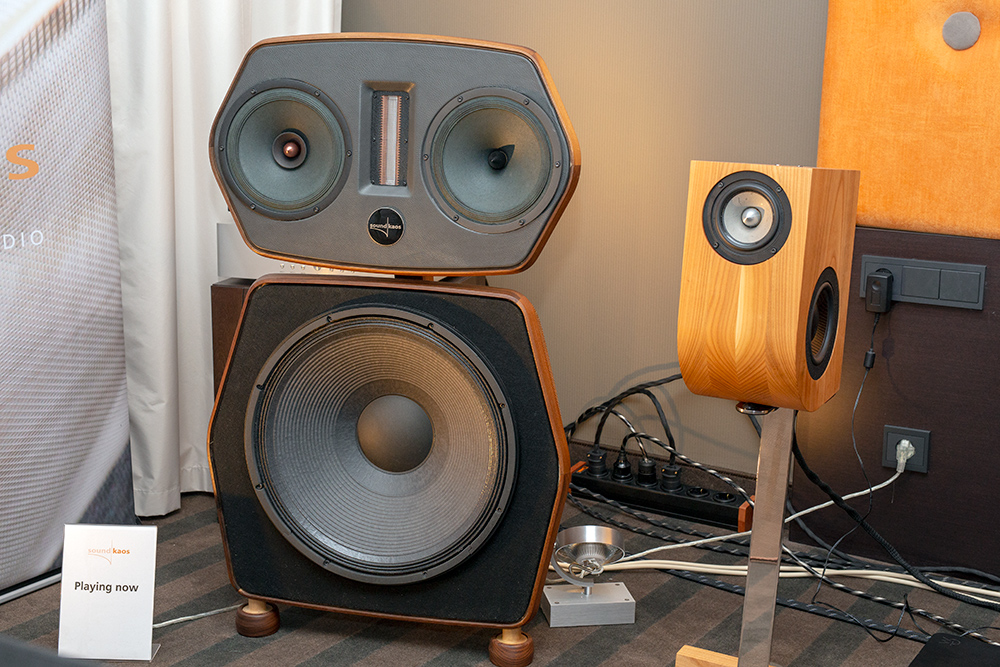 . . . are made of a nicely finished bronze mesh. Soundkaos quotes a believable 95dB sensitivity. The Libération retails for €17,400 per pair in a choice of maple or walnut. As for how the pair sounded, let me say this: Jason Thorpe didn’t want to leave this room, and for the next hour he raved about how rich and enjoyable these speakers sounded. Soundkaos was also debuting another, completely different speaker -- the Vox 3 (right), which employs one full-range 4" front-facing midrange driver, two 5" bass drivers (one on each side), and an upward-facing ribbon tweeter. It’s a tiny speaker, but that’s at least a lot of technology for €5500 per pair. 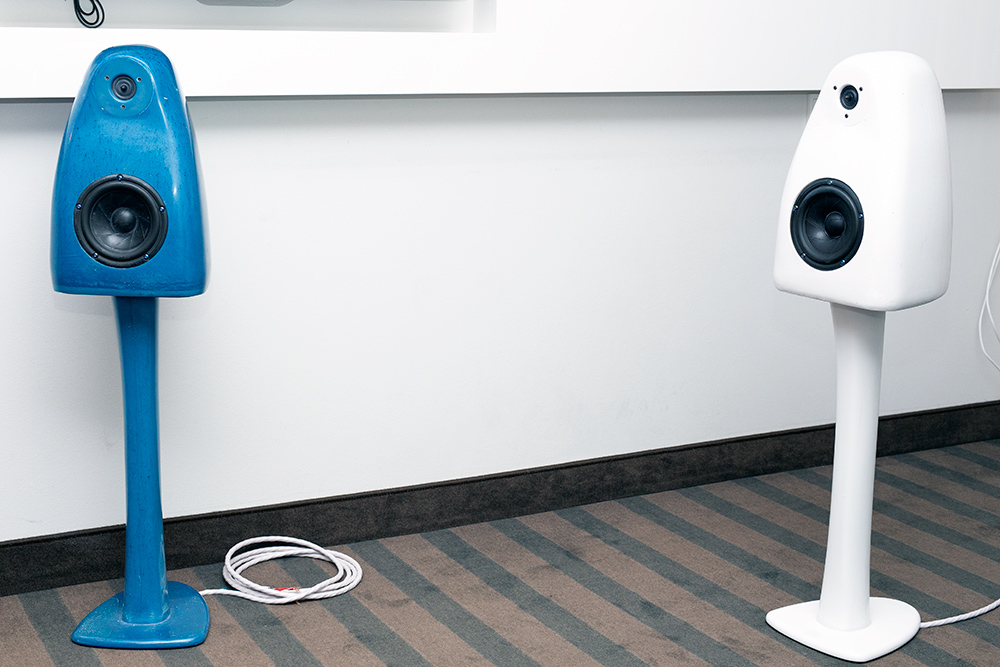 Materics Audio is a new company from Milan, Italy. It sells an amplifier and speakers that were still prototypes at the show, but will sell as a complete system for €5000, although the products are also available separately. The speakers are made of a synthetic stone that the company calls Azanite. The back of the driver is braced against the Azanite, which helps to lock it into the chassis and damp resonances. The matching amplifier . . . 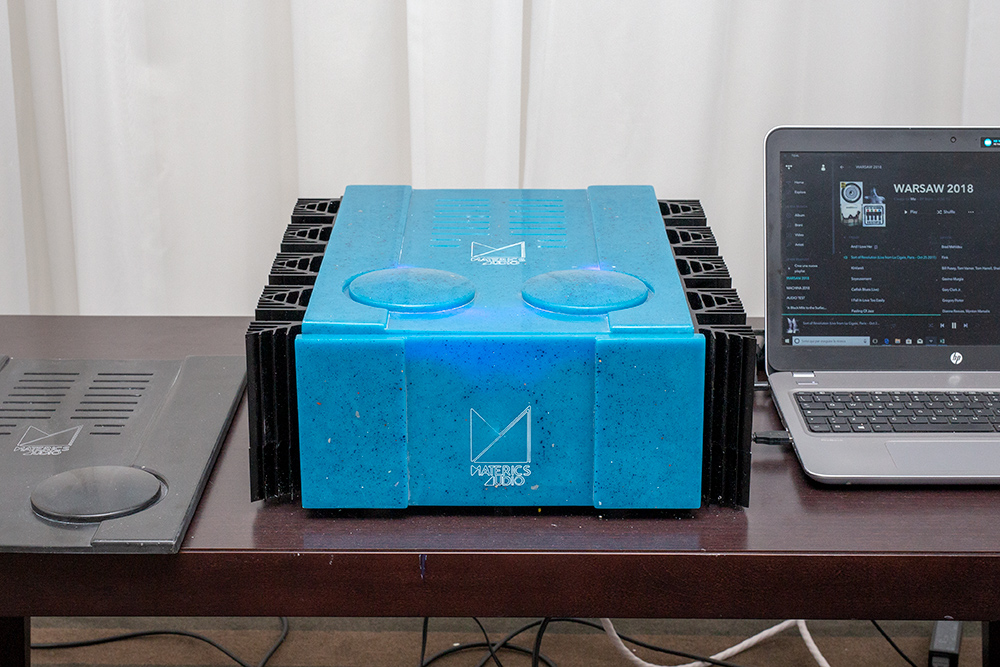 . . . is a full class-A design, and all of its internal components are also damped with Azanite. The speakers and amplifier are available in a plethora of colors, and Materics Audio plans to offer a generous lifetime guarantee on its products. 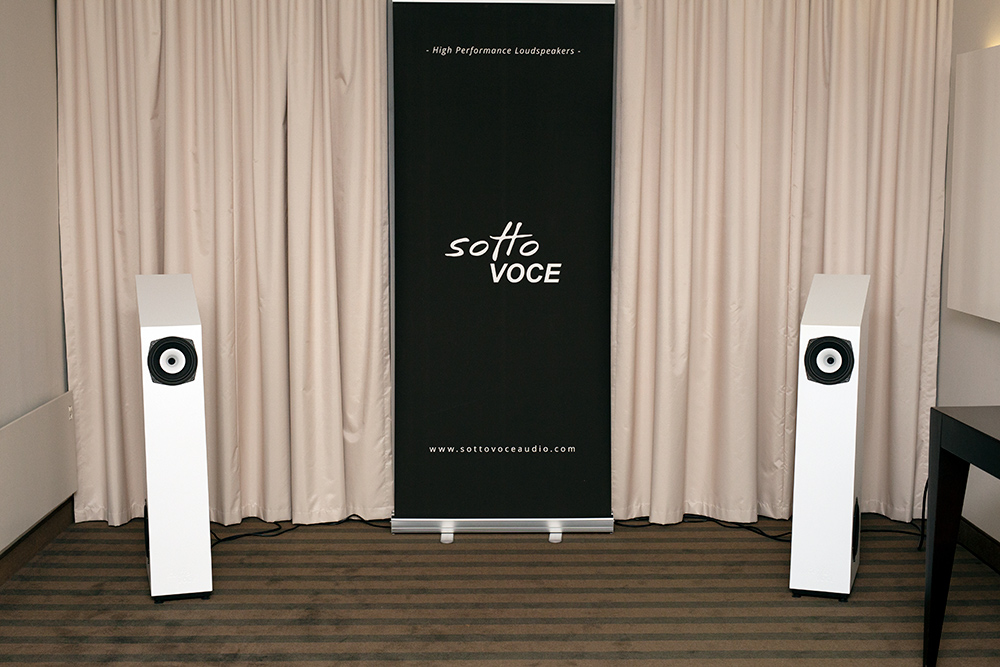 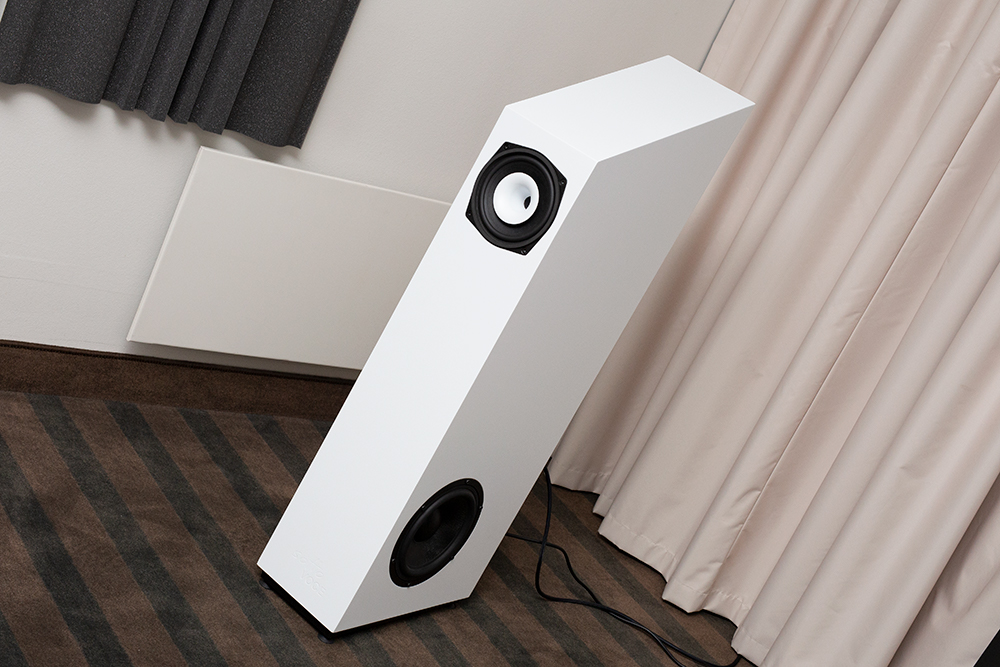 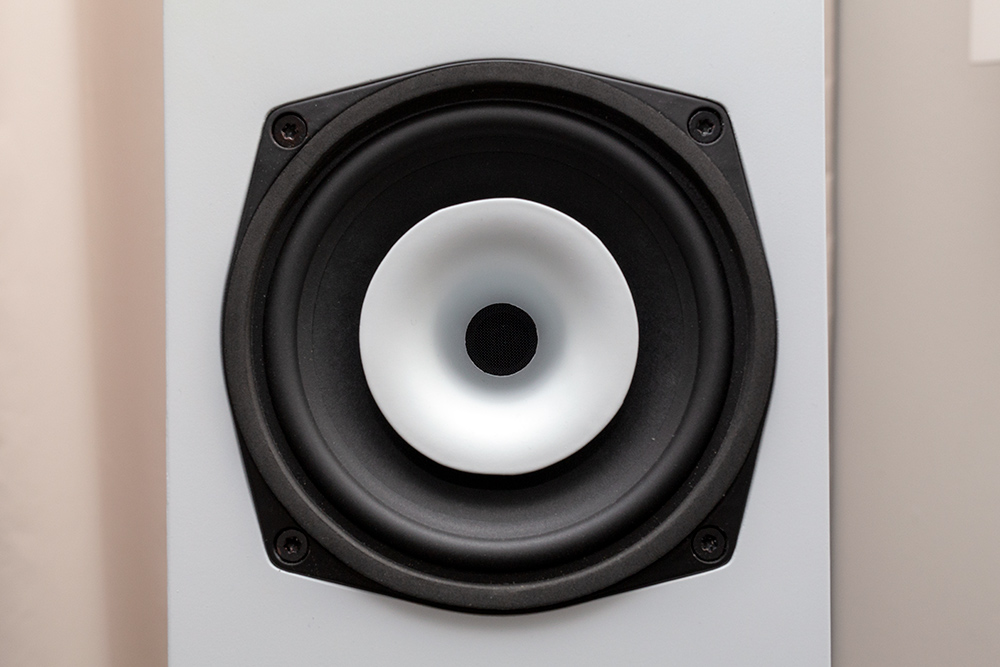 . . . coaxially aligned with a 1.75" compression driver for a tweeter. Each speaker contains two amplifiers -- one for the woofers and another for the coaxial midrange-tweeter, which uses a passive crossover to separate the signals for the midrange and tweeter sections. The basic white version is €12,000 per pair, but other finishes are available for an extra charge. Sottovoce provides substantial flight cases for its speakers. Our short audition revealed deep and controlled bass with a relaxed top end. This looks to be a very listenable speaker with a lot of technology, and it seems well worth checking out -- in fact, I liked the sound of the Stereo 3s as much as Jason liked the Soundkaos Libérations.