"I like perfect products," Octave Audio's founder and chief designer, Andreas Hoffman (shown in photo below), said to me. "That's why I try to make my amplifiers as perfect as possible."

That's a strong statement, obviously, and at first I didn't know exactly what to make of it. Frankly, I knew little about Hoffman or his products before I arrived in Germany on May 11, 2014, for a tour of his company. I knew even less about where or how they are made. But after spending the first evening of my visit talking to Hoffman and the entire next day touring his factory, I learned plenty more. I now consider myself more than acquainted with this fine German company, and I can understand why this rather modest and unassuming man might be inclined to make such a bold statement, which this series of articles should help to explain. It also doesn't hurt his case that Hoffman began dabbling in electronics in 1967, when he was just ten, when his father, an electrical engineer and an expert in transformer design, started teaching him. What's more, Octave Audio has been in business for some 34 years (the business officially began in 1980). Given that lengthy time in electronics and in business, I can only surmise that he must know a thing or two about what he's doing. 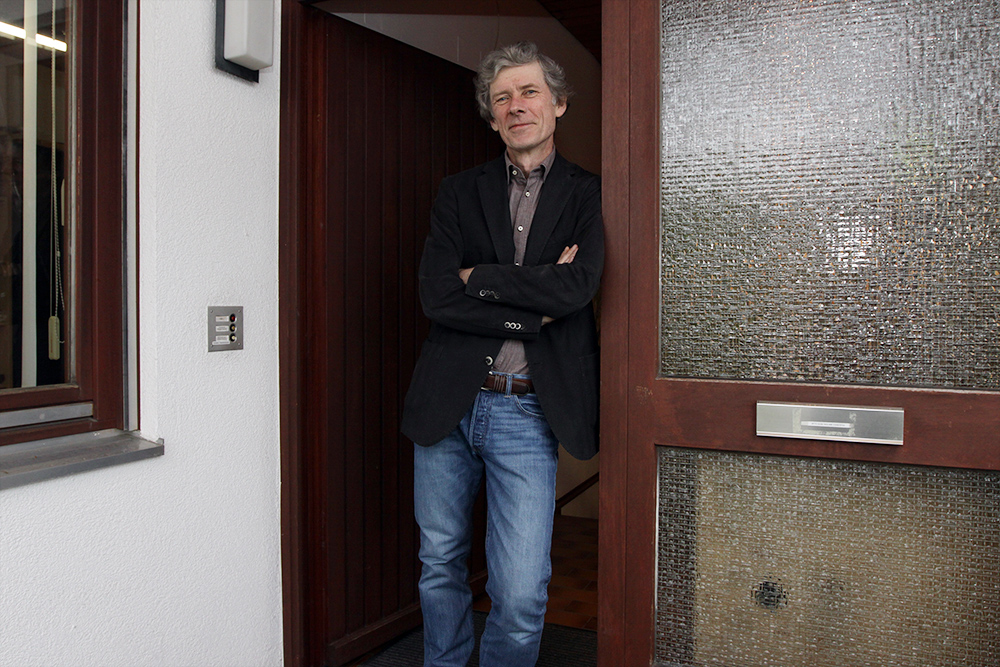 About the place: Octave Audio's factory is in Karlsbad, Germany, a small village only a few kilometers from where Hoffman and his family members grew up, and all still live. In fact, his .  . . 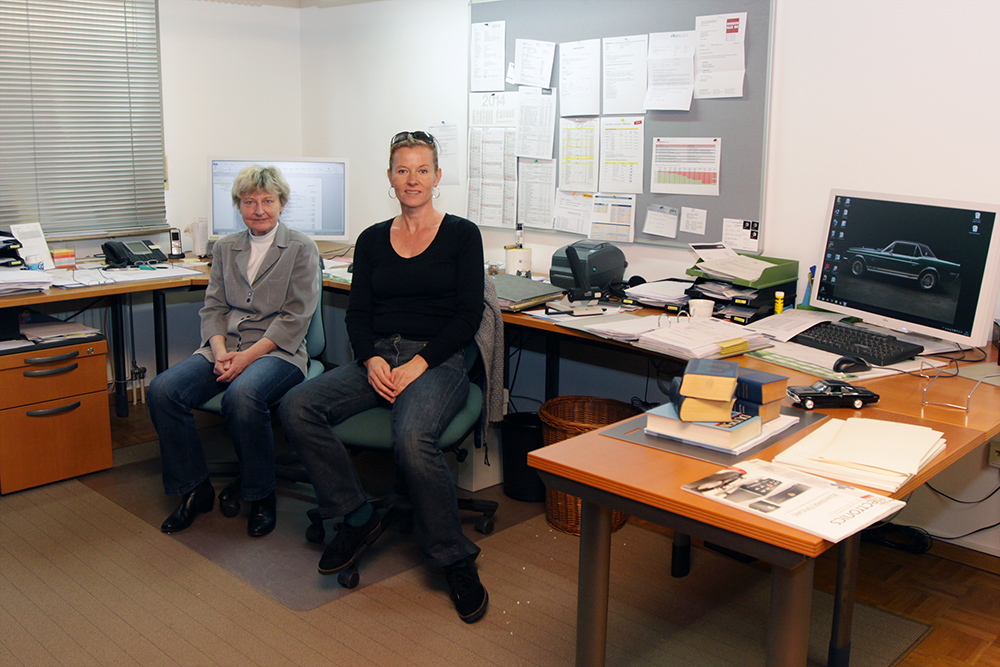 . . . wife, Elke (left), and sister, Steffi, work in Octave Audio's administration and help to manage the company. (Andreas pointed out to me that Steffi is a big fan of American cars, as is evidenced by her computer screen. According to Steffi, the '67 Mustang Shelby is "the best.") He also told me that his father, despite being long since retired, still comes in to help build transformers because that's what he loves to do. 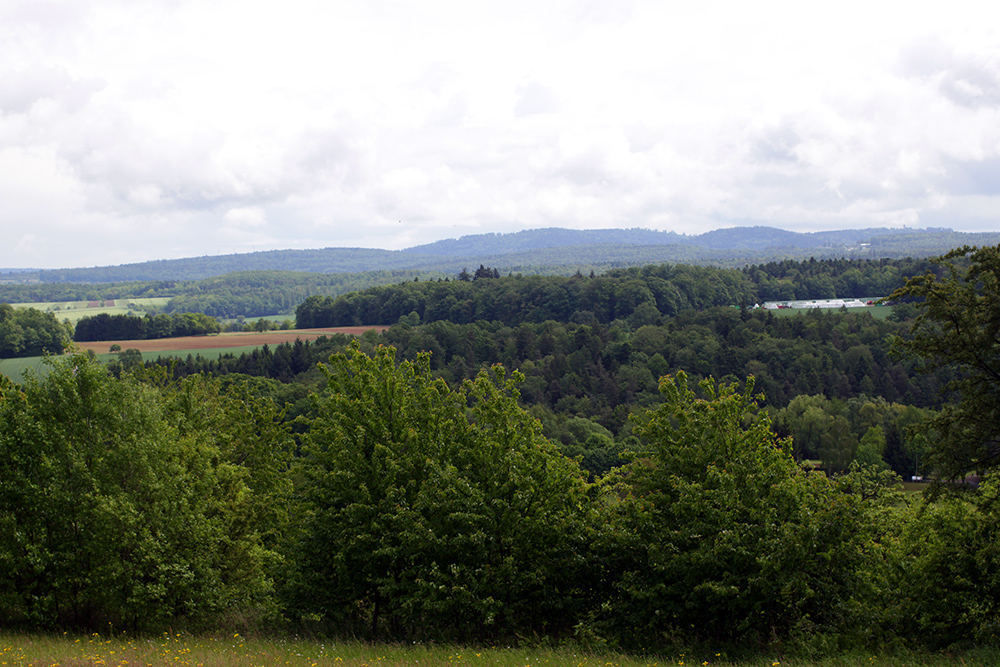 But besides the industrious Hoffman family, Karlsbad is also famous for another thing -- it sits on the edge of Germany's Black Forest mountain range, which runs approximately 160km in length and 60km in width, and has a peak elevation of almost 1500m. It's a beautiful spot. 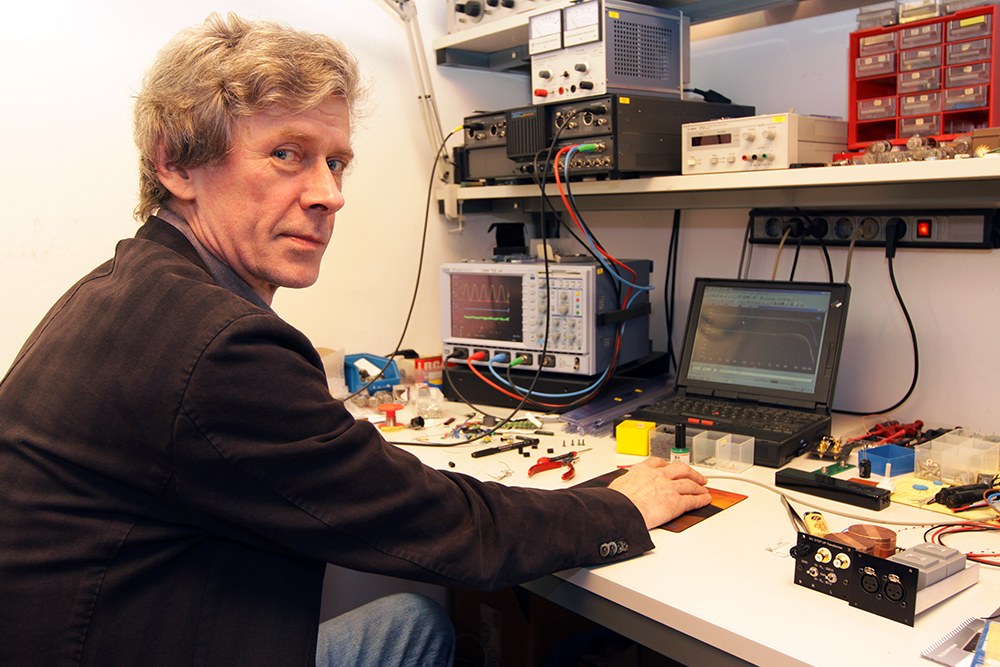 Although Octave Audio has about 15 employees, Hoffman remains the company's sole designer. He's therefore fully responsible for every product the company makes. His designs are all tube based, but, surprisingly, he didn't disparage solid-state designs when I talked to him -- he actually pointed out some solid-state products he likes, and he confessed to creating some pretty good ones himself back when. But Hoffman also stressed that one of the strengths of Octave Audio has to do with focusing on a specific technology -- in Octave's case, tubes -- and doing the best job with it. He also believes in focusing on designing products where he can have a competitive advantage. For example, Hoffman has no interest in chasing after ever-changing digital technology, so there are no disc players or DACs in his company's product line. As a result, Octave Audio makes only preamplifiers, power amplifiers, integrated amplifiers, and phono preamplifiers.

When I asked what makes his tube-based products unique, he pointed to the following things above all. First, he stressed that he doesn't rehash designs from decades ago. He instead uses modern engineering, parts, and manufacturing technologies to make the best tube-based technology today. Next he emphasized the importance he places on the transformers and power supplies. As a result, Octave makes proprietary transformers in-house (expertise he gained from his father). Furthermore, the transformers they make have no output taps -- he points to the phase anomalies that taps can create, and resulting nonlinearities and instabilities when combined with amplifiers feedback mechanism. So Octave Audio's amps are tapless and optimized for 4-ohm loads, which Hoffman believes gives the best amplifier performance and broadest speaker compatibility. For the preamplifier and phono-amplifier power supplies, vanishingly low noise and distortion are requirements; for power amplifiers, he highlighted that the power supply's stability must exceed that of the entire amplifier to effectively control and deliver power to the speakers. Finally, he feels that safety is paramount, not only for the components, but for the speakers, and, of course, the user. Not surprisingly, then, all of Octave Audio's components have an advanced monitoring system built in that protects against numerous things, including tube failure, overload, and powerline surges. Basically, if anything goes wrong with the component, it shuts down instantaneously. Andreas did a live demonstration by mimicking various failures on a product currently being tested, which I showed pictures of in the "Quality Control" article that finishes this series. Suffice it to say that if you're interested in tubes, but you fear them failing, Octave is likely your brand.

Then there was something that Andreas didn't have to explicitly mention, but I noticed when I was visiting -- except for the tubes (which come from Russia), Octave's products are made in Germany with mostly German-made parts by people who have been with the company a long time. These things add up to painstaking attention to detail and topflight product quality.

As I said, I went into this tour of Octave Audio knowing next to nothing about the founder or his company, but I went away having learned plenty. What I hope is that these articles give you similar insight as well, because Octave Audio is a company well worth knowing more about.