KEF’s Classic Gets Updated: Introducing the LS50 Meta and Its New “Killer Feature”

I was in Munich at High End 2012 when KEF officially released the LS50 bookshelf-type loudspeaker, which the company designed to celebrate its 50th anniversary. It was being marketed as a modern-day version of the BBC’s LS3/5A minimonitor.

The moment KEF showed and played a pair of LS50s, I knew that buyers around the world would be interested in its diminutive two-way. But it was when the company announced the price -- $1500/pair in the United States, which was about two-thirds to half of what I initially thought it might be -- that I knew it would be a hit. Yet I didn’t know how big of a hit the LS50 would become. And even after I reviewed the LS50 in April 2013, I still didn’t know the huge impact it would ultimately have. 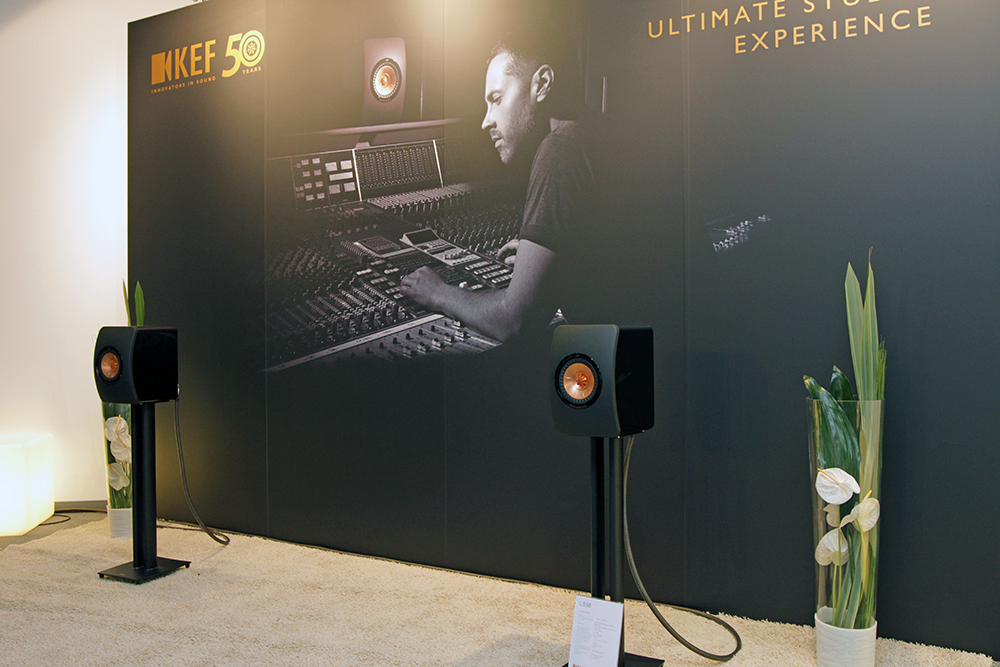 In 2015 I went with our video team to KEF headquarters, in Maidstone, UK, to film, among other things, a SoundStage! Shorts episode featuring LS50 designer Mark Dodd. It was there that I learned that in the first two years after the LS50’s release, its sales were already in the tens of thousands of pairs -- much more than I’d expected. When I recently contacted KEF to ask how many pairs of LS50s have been sold to date, no one could give me the exact figure, but I learned that 100,000 pairs would be a “very conservative” estimate. In today’s hi-fi market, that’s an astonishingly high number of loudspeakers sold. In fact, I can’t think of any audiophile-oriented speaker released in the last 25 years from any company that would come close in terms of sales volume (Bluetooth, mass-market, and custom-install speakers are a different story). What’s more, KEF was able to use the LS50 platform to produce a cutting-edge offspring, the LS50 Wireless -- a DSP-controlled, fully active design -- which debuted in early 2017 and has also been a big seller for the brand. 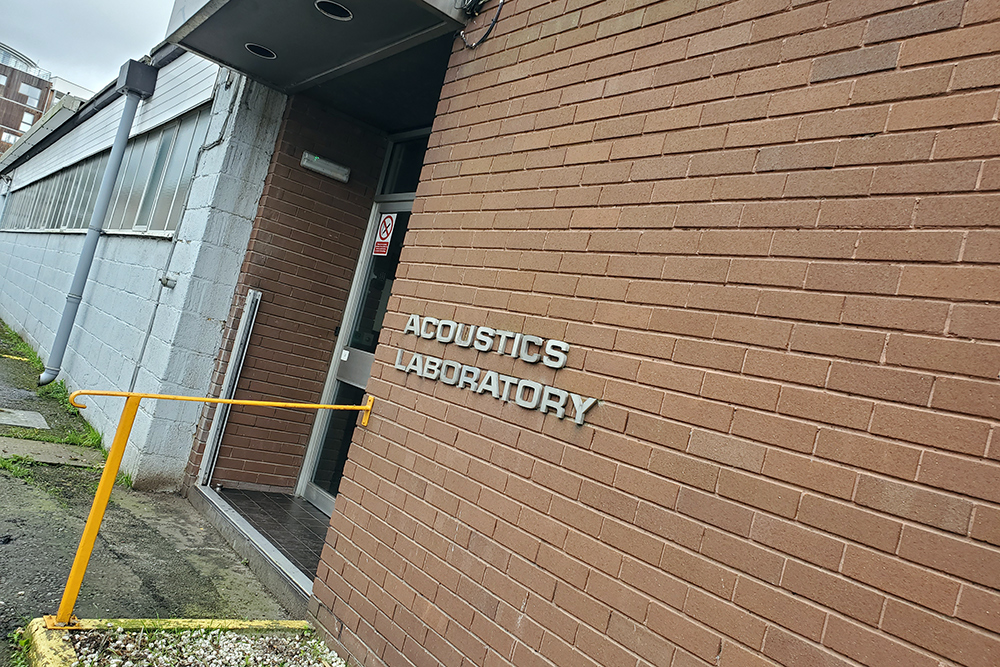 Where KEF speakers are designed

Frankly, I think KEF could’ve gone on selling the LS50 for several more years, since the enthusiasm remains high. If KEF just continued to change the finishes every now and then to cosmetically freshen the LS50, as it has already been doing for several years now (the limited-edition all-black one, including cone, was brilliant), it would still make plenty of sales month after month, year after year.

But great companies don’t rest on their laurels, and I think KEF’s marketing and engineering teams both knew that it was probably time to revisit the LS50 to see what real improvements -- i.e., to the sound -- they could make, particularly since the company has released new speaker lines since 2012 that have had notable improvements to their Uni-Q driver-array technology. For example, the designers found ways to lower distortion in KEF’s Uni-Q drivers, which we’ve seen show up as improvements when we’ve measured the company’s newer speakers, such as the Reference models, released in 2014. KEF has also developed the “tweeter gap damper” for its newest R-series speakers, released in 2018. It claims the damper will “mitigate the negative acoustic effects of the small channel of air between the coaxially mounted midrange cone and tweeter,” which results in a smoother output from the tweeter. 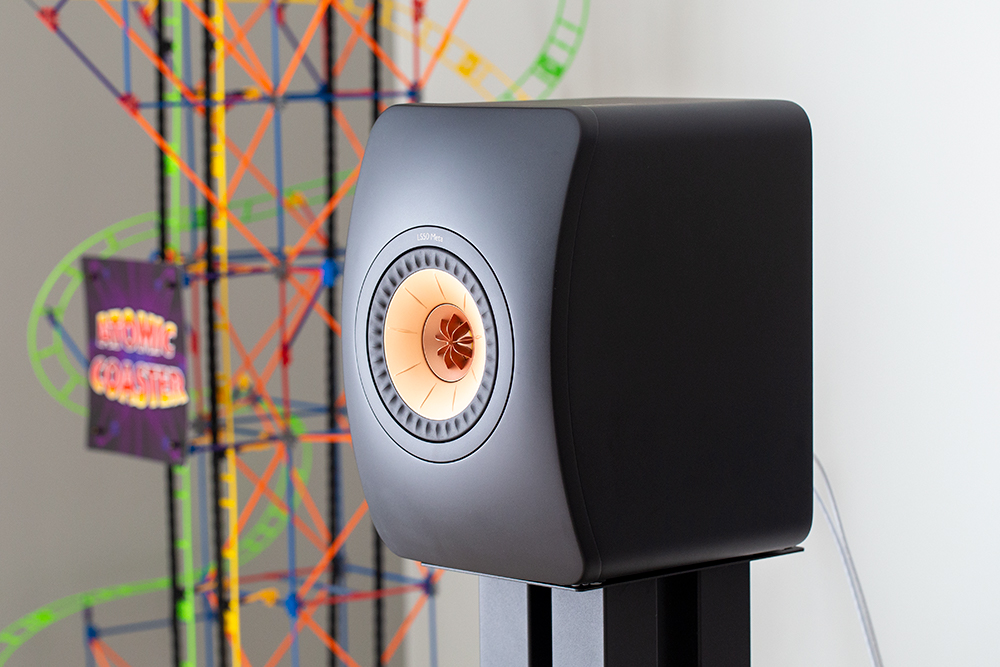 Consequently, it should be no surprise to hear that the damper and other improvements are now in the LS50’s replacement, the LS50 Meta, which KEF officially released today. Plus, there’s something even more important in it. But before I get to that . . .

I was fortunate to be able to visit KEF’s headquarters again in March of this year -- literally days before countries around the world began closing their borders due to COVID-19. While there, I got the skinny on the LS50 Meta, and I interviewed the two lead designers behind it for a video we published on YouTube today: Dr. Jack Oclee-Brown, who’s been at KEF since 2004, and ‪Dr. Sébastien Degraeve, who joined the company in 2018. (Mark Dodd is currently working for Celestion International, a sister brand to KEF.) 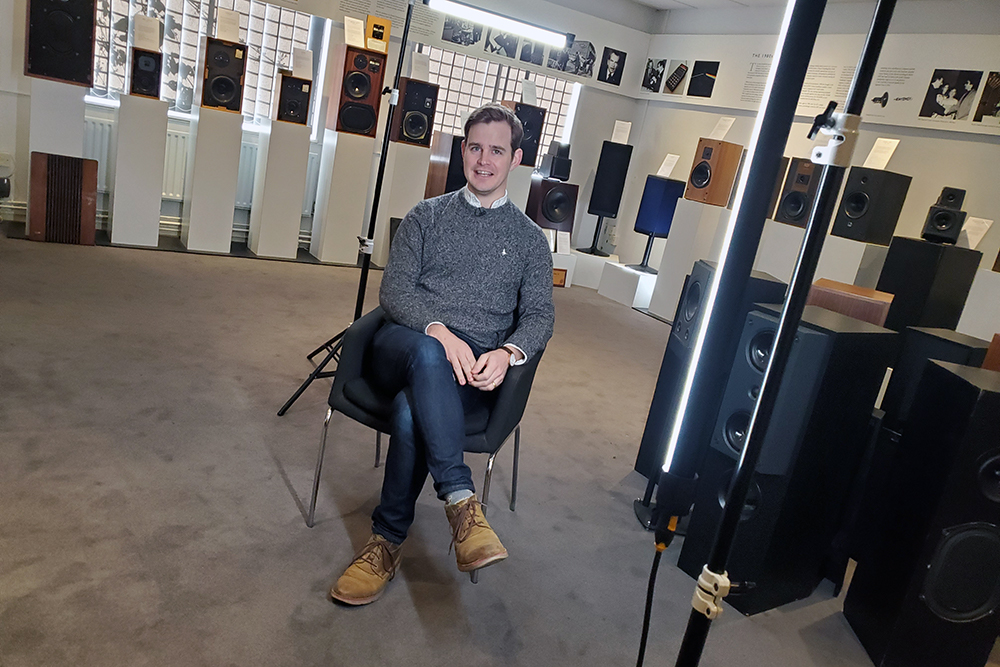 Dr. Jack Oclee-Brown about to be interviewed

It was obvious from the start of the interviews that both were most excited to talk about what Oclee-Brown called the LS50 Meta’s “killer feature” -- an acoustic absorber that’s attached to the back of the LS50 Meta’s Uni-Q driver array, improving its sound and also explaining why Meta is part of the name. The absorber is made from what’s called a metamaterial, a word that was new to me the moment that one of them first said it.

According to Wikipedia.org, “[a] metamaterial is any material engineered to have a property that is not found in naturally occurring materials. They are made from assemblies of multiple elements fashioned from composite materials such as metals and plastics.” In other words, it’s a man-made material designed to serve a specific purpose. 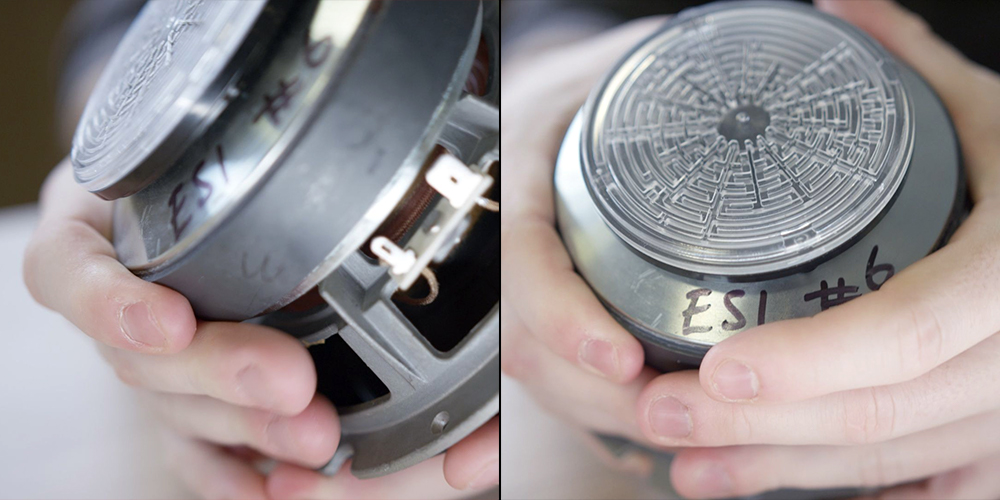 KEF’s absorber is a disc, maybe 3" across and about 0.5" thick. Within it are channels running this way and that, which makes it look like one of those toy mazes that has a tiny stainless-steel ball that you try to get from one area to another. The absorber’s sole purpose is to eliminate as much of the rear-wave energy from the LS50 Meta’s tweeter dome as possible so that it doesn’t bounce around inside the driver housing or cabinet and interfere with the dome as it’s reproducing the frontward-directed energy, which is ultimately what you hear. KEF calls this new development Metamaterial Absorption Technology (MAT), which it says is 99 percent effective at absorbing soundwaves. The LS50 Meta is the first KEF speaker to have MAT in it.

This concept of using an absorber to capture the energy directed rearward from a driver diaphragm isn’t new. As Jack pointed out in our video, companies have traditionally done so with fibrous material placed inside the cabinet. There are also the tapered tubes that Bowers & Wilkins began using in the Nautilus loudspeaker, which debuted in 1993. It was Laurence Dickie who invented the tubes when he worked there as an engineer, for the express purpose of absorbing a driver diaphragm’s rearward-directed sound. Bowers & Wilkins still uses tapered tubes in many of its loudspeakers; Dickie also uses them in the speakers of Vivid Audio, a company he cofounded in 2004. KEF’s implementation can be thought of as a radical rethinking of that, utilizing metamaterial technology, which, to the best of my knowledge, has never been used in a hi-fi product in this way before.

Not coincidentally, Degraeve’s PhD work was in the field of acoustic metamaterials, so I have to think that his start at KEF in 2018 was when the serious work on its metamaterial absorber began. But it didn’t begin with the disc you see today. The company went through plenty of prototype ideas using what Degraeve called multiple “sub-wavelength resonators” -- essentially tubes of varying lengths, each tuned to a specific frequency so that when the sound goes into it, it can’t get out of it. In one test, Degraeve and Oclee-Brown used 15 resonators, but the resulting frequency response wasn’t smooth enough. They wound up having to increase the tube count to 30 to get the broadband absorption they wanted.

The next problem was getting all those tubes into the small chamber behind the tweeter. To do so, KEF worked in conjunction with Acoustic Metamaterials Group (AMG), which is based in Hong Kong, to create the metamaterial disc you see today. When you look at the disc and see all those channels that have it looking like a toy maze, it’s important to understand that those little channels are really the same thing as long, straight tubes, each acting as an absorber. They just ingeniously crammed them into a compact space. (For a more technical story about MAT, download Degraeve and Oclee-Brown’s paper on the development of the absorber from the Audio Engineering Society website.) 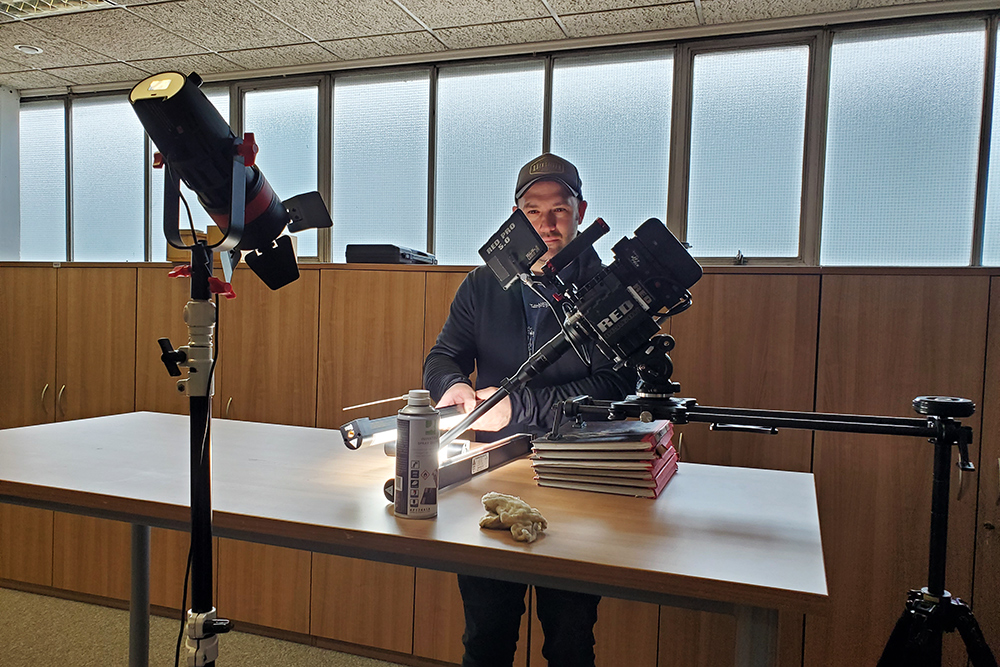 SoundStage! chief videographer Chris Chitaroni filming the close-ups of the MAT absorber that you can see in our YouTube video

While at KEF, I got to see inside and outside prototype LS50 Metas the company was still working on. I was obviously taken aback by the metamaterial technology, but one thing that surprised me was that the cabinet, at least for the prototypes, looked to have the same small size -- 11.9"H x 7.9"W x 10.9"D -- and shape as the original LS50. The rounded front baffle, binding posts, port opening, and flexible port tube all seemed unchanged from the original 2012 model as well, which I asked Oclee-Brown about. He matter-of-factly told me that they looked at everything to do with the cabinet and couldn’t improve upon it, so they left those parts alone.

What did change is the crossover, since the tweeter and midrange-woofer differ somewhat, as did the finishes the LS50 Meta comes in. Gone is the gloss-black painted finish of the original LS50. In its place is a matte-black painted finish called Carbon Black -- the finish of the samples I recently received and will write about. Other standard finishes include Mineral White, Royal Blue Special Edition, and Titanium Grey. 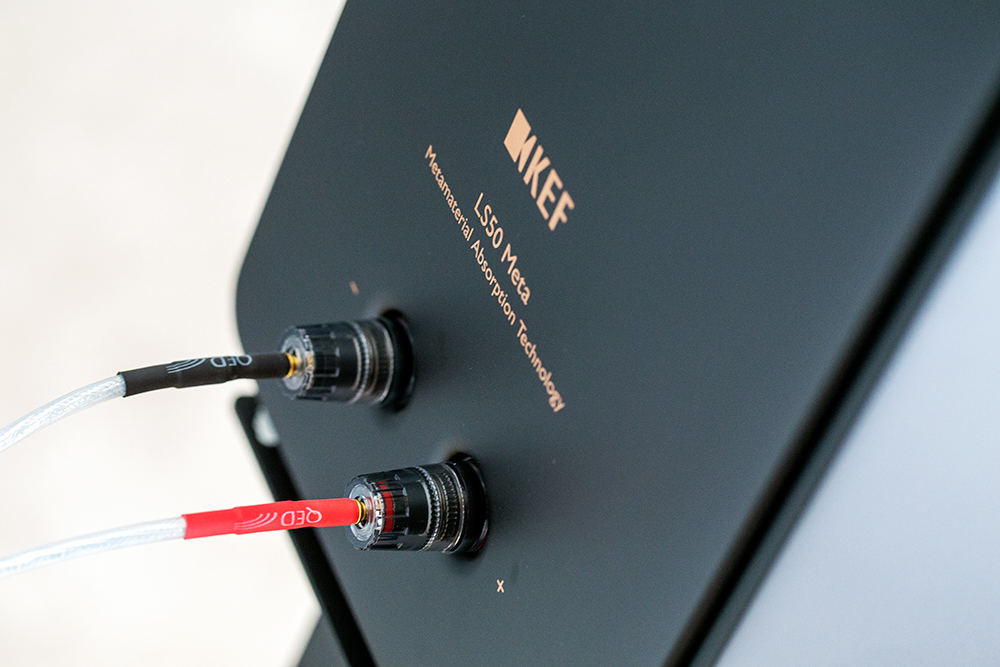 There’s also one more thing that didn’t change, and I think people will be happy about it -- the price. The new LS50 Meta, with this new metamaterial tech that I just know is going to trickle into KEF’s other speaker lines over time (no one told me it would, but KEF has a way of taking one technology and moving it elsewhere, so it’s a safe bet), is still $1500 per pair. As a result, I have no doubt this loudspeaker is going to be a hit again for KEF. I have only two questions: Will its sales exceed the original? And will this version also be considered a classic in eight years’ time?

To find out more about how the new LS50 Meta sounds and measures, as well as how it compares to the original LS50, look for my full review of it on SoundStage! Hi-Fi on November 1.