I was back at New York City’s Chelsea Wine Vault on October 19, 2019, for another audio event, this time featuring product demonstrations by Dragonfire Acoustics and Theoretica Applied Physics. As I have written before, the Chelsea Wine Vault mixes a gorgeous retail wine store with high-end audio. Now-retired Wall Street tycoon Andrew Hoover III, who stores his wine collection in the Vault’s commercial wine-storage facility, has so many high-end audio systems that he uses the Vault as his system overflow space. High-end systems are everywhere! 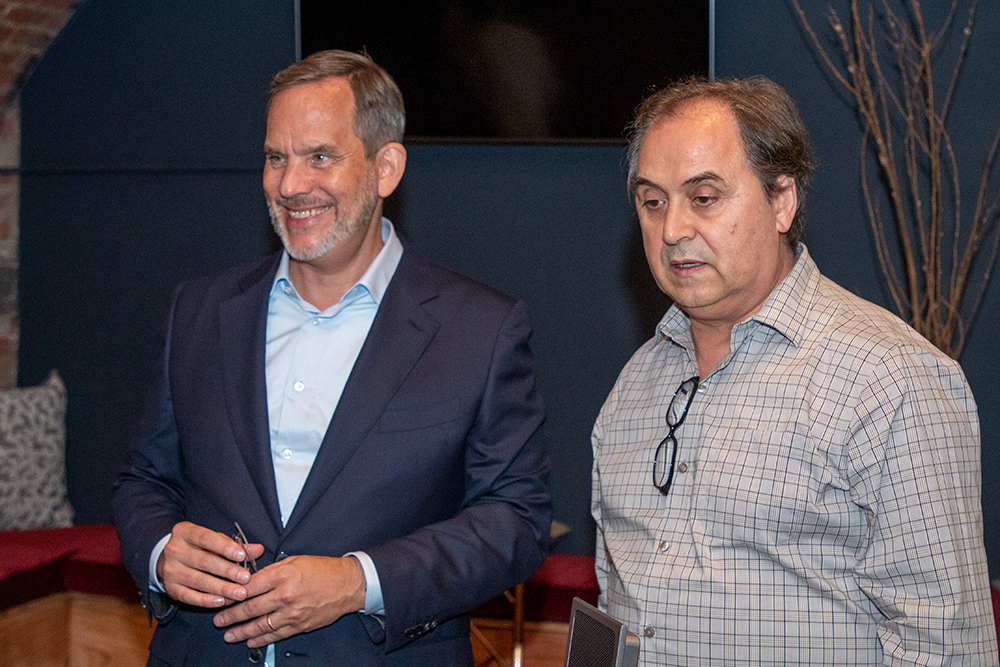 Dragonfire Acoustics was founded by Dr. Dragoslav Colich, who is known by many simply as Dr. C. He has been designing planar-magnetic transducers since the 1970s. Colich is also the founder of Audeze, which is, not surprisingly, a manufacturer of planar-magnetic headphones, as well as headphone amplifiers. He is presently Audeze’s Chief Technology Officer, and in that role he has designed most of Audeze’s products.

At the Wine Vault, Colich showed Dragonfire’s 2.1-channel Mini Dragon desktop system, which he stated is the culmination of his life’s work. Normally retailing for approximately $10,000 (all prices are USD), it is being offered for a limited time for $7500. Its components, which are available separately, consist of:

Theoretica Applied Physics was founded by Edgar Choueiri, who is a Princeton University professor, a leading plasma physics and spacecraft-propulsion scientist, and an audiophile. The company’s products include a line of sound processors that use proprietary BACCH 3D Sound technology to create three-dimensional (3D) imaging through interaural crosstalk cancellation (IXTC). 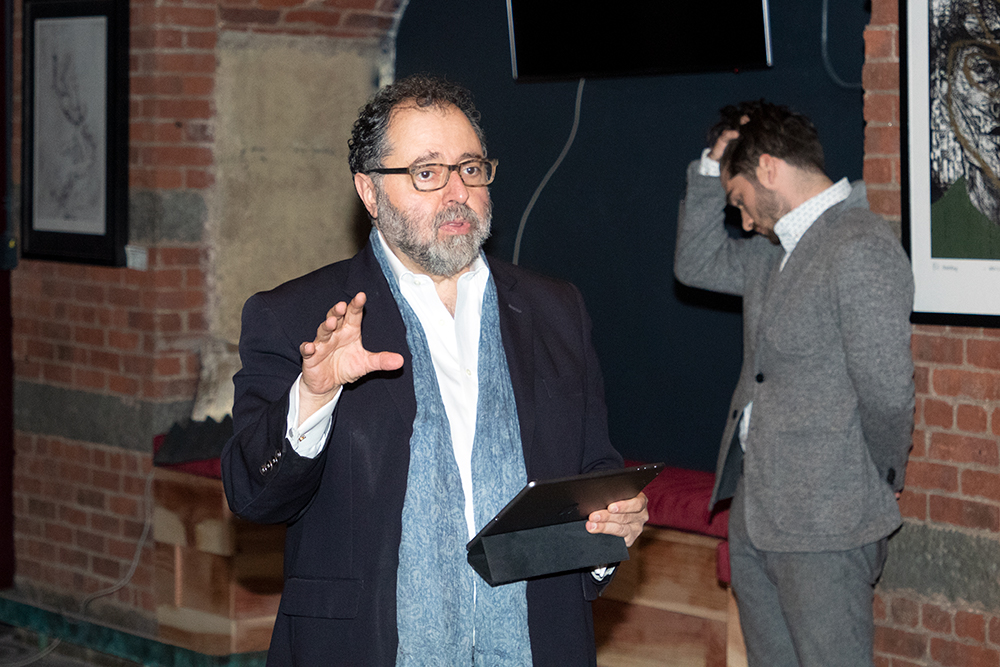 I reviewed Theoretica’s BACCH-SP adio 3D processor ($23,800 base price) for SoundStage! Ultra recently. In that review, I discussed interaural crosstalk in detail. Briefly stated, it is an audible artifact created by virtually all speaker-based stereo playback systems when sound from the left channel reaches the listener’s right ear and sound from the right channel reaches the left ear. Interaural crosstalk hinders the ear-brain system’s ability to fully decode the spatial cues preserved in most stereo recordings, thus preventing the listener from experiencing aural images that are convincingly three dimensional. IXTC generally sends an inverted and delayed canceling version of the left-channel signal to the right-channel speaker, and vice versa.

The way the BACCH-SP technology works, the listener’s head is tracked in real time, allowing them to hear 3D sound as long as the person stays within a predefined, but relatively large, sweet spot. Multiple listeners can take advantage of that spot if they sit in a line, one behind the other. 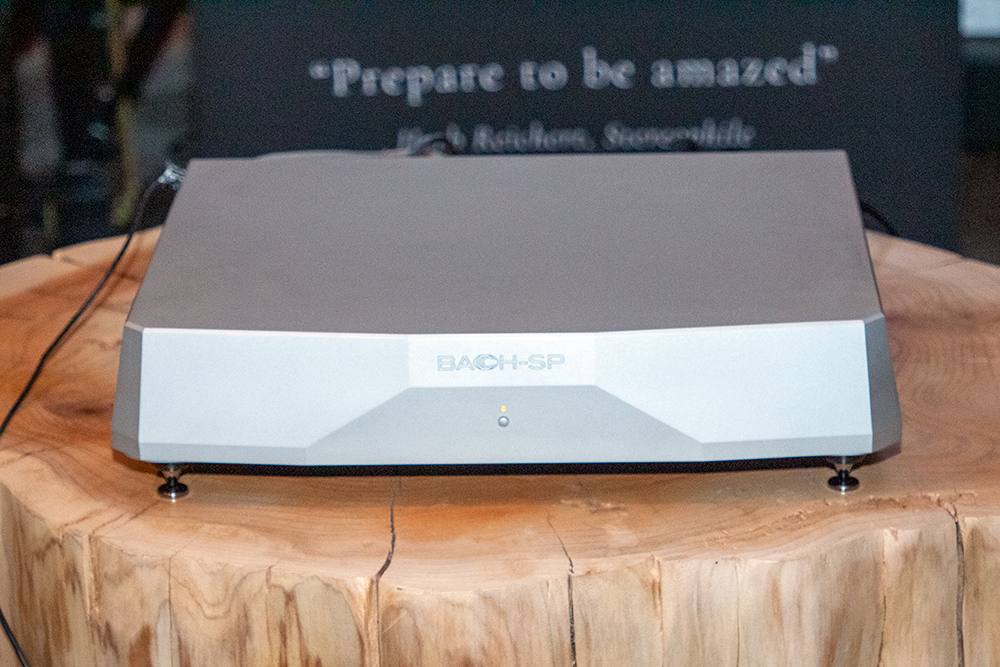 At the event, Choueiri showed Theoretica’s top-of-the line BACCH-SP Grand processor ($54,000 base price), which includes a built-in preamplifier, DAC, analog-to-digital converter, master word clock, binaural microphone and recorder, webcam head tracker with tripod to track the listener within the IXTC sweet spot, headphone amp, 64-bit equalization software, and connectors for practically every known audio input and output format. Also included is a software toolkit, which, among other things, measures room reflections. There is also an iPad for remote control. 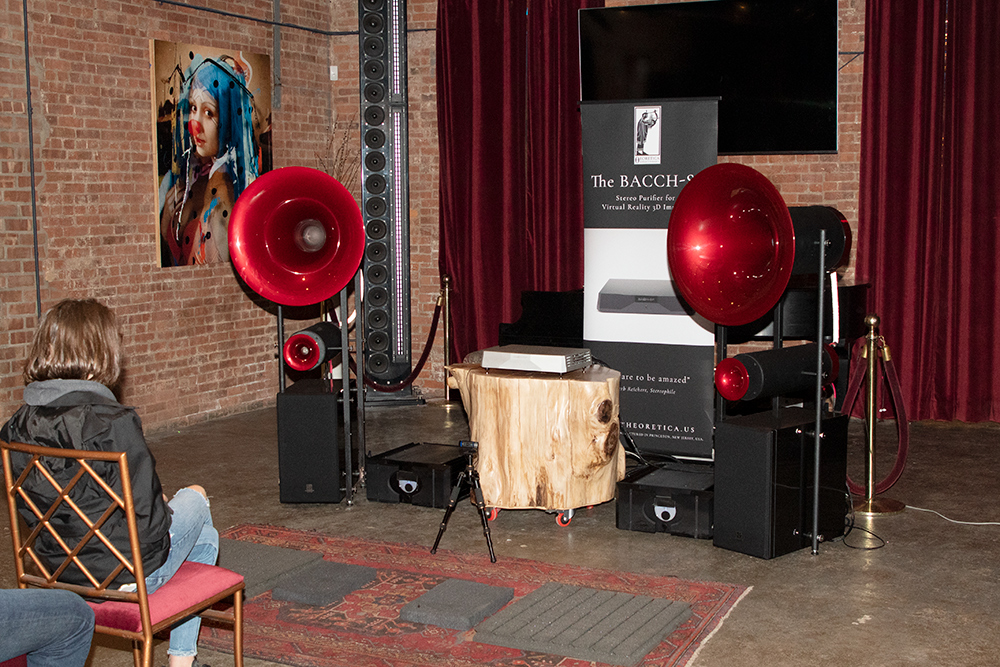 The two companies first gave separate demos. The Mini Dragon system’s performance was quite surprising. Its sound was incredibly clear, transparent, detailed, and fluid, with lightning-fast transients. Soundstage images were rock solid. Though expensive by the standards of the typical desktop system, it provides a lot for the money, both in gear and sound. It not only bettered numerous other systems costing beaucoup dollars; it redefined what I expect to be possible in performance from a small-profile desktop system.

As for Theoretica, I have heard the company demonstrate its Grand processor at the Wine Vault before, but this demo contained a twist, as it did not simply consist of the playback of pre-recorded music. At the event were two musicians, a flutist and a guitarist. Using the Grand and its binaural microphone, Choueiri recorded these musicians playing several musical works. He then played back the recordings through the stereo system while the musicians pretended to play. The soundstaging was so uncannily focused and real that I couldn’t tell that the sound wasn’t being created by the musicians. 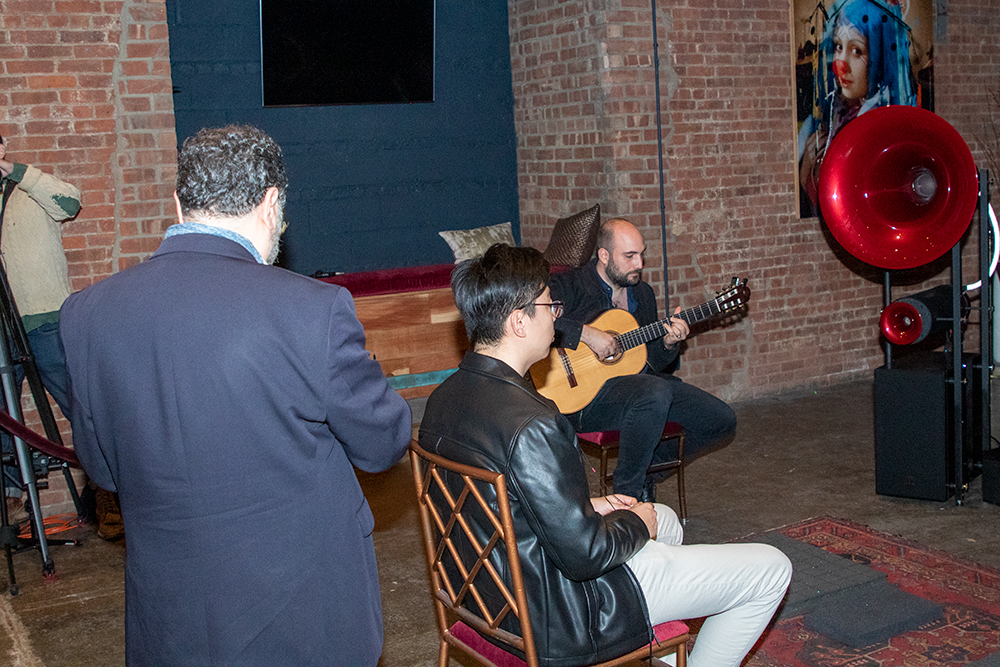 After these separate demos, Colich revealed that he had brought to the event a prototype of a new Mini Dragon desktop system that Dragonfire and Theoretica are collaborating on. This system, estimated to cost approximately $15,000, runs a version of Theoretica’s 3D Sound software and contains a computer stand with a built-in subwoofer system. Although the prototype stand he brought was quite bulky, it is anticipated that the finished product will be slimmed down.

Colich then repeated the recording and playback demo with the same musicians, but this time through the prototype Mini Dragon system. Even with the much less expensive Mini Dragon, the sound unmistakably seemed to emanate from the musicians, even though they were again only pretending to play their instruments. 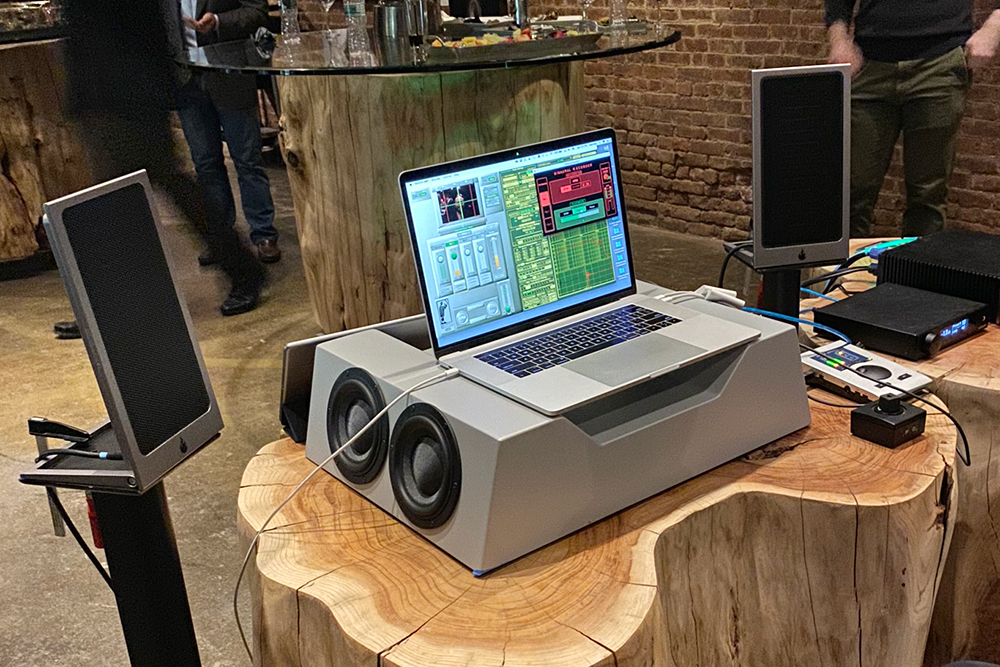 It was evident that the event’s attendees, consisting of audiophiles and others, were shocked. They could not believe that these two stereo systems, both of which used the BACCH 3D Sound technology, created such life-like, three-dimensional, and spatially correct aural images. At one point, an attendee asked whether I could believe what I was hearing. Having reviewed the Theoretica adio processor, I told her that I’d heard such images in my listening room, to which she seemed quite surprised. If Choueiri and Colich are successful in bringing that technology to systems costing around $15,000, such as the anticipated Mini Dragon desktop system, many other folks will be hearing state-of-the-art stereo imaging in their rooms, too. 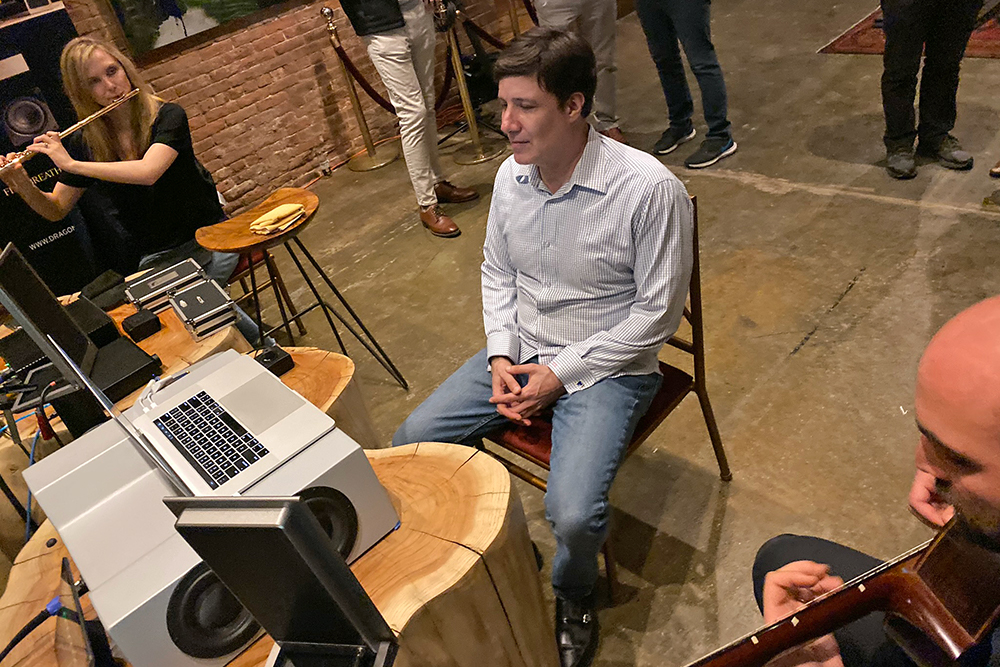 One more thing: Colich is designing a custom Stereo Surface Array sound system for the Chelsea Wine Vault that will be powered by internal amplifiers with a total 50,000W. It includes 160 planar-magnetic transducers (the same as used in the Mini Dragon satellite speakers) and a monster subwoofer system that consists of 12 newly designed 21" woofers from Eminence Speaker. If I survive the demo, I will provide a full report on SoundStage! Global.