What Is the Rotel Michi Series?

Rotel originally released its Michi series of products in the Japanese market back in the early 1990s. The word michi, in Japanese, literally translates to the road, or path. In the 1990s, Michi products were primarily targeted toward the Japanese market, but the products quickly found global success, as they delivered a step up in audio performance over the company’s other lines. Michi also finished them with classic Japanese rosewood side panels and priced them competitively. The brand’s new products, while still competitively priced, pack a wallop of performance and look anything but traditional. They also don’t appear to be aimed at any specific market, so I asked Daren Orth, Rotel’s chief technical officer, what precipitated the development of the new line. Orth’s response was eloquent and informative:

Rotel has always been focused on performance and value. This has been the DNA of the business since the founder, Mr. Tomoki Tachikawa, launched Rotel in 1961. When considering the audio market, it was clear there was a need and opportunity to deliver a higher-class, step-up series of audio products with performance and exceptional value. The relaunch of Michi was a natural fit for this opportunity, having done exactly the same thing in the 1990s with the original Michi series. There was never an aspiration to be the most expensive nor a desire to be the least expensive in the market. Rather, the objective was focused on engineering a solution that provided a genuine step up in acoustic performance that would be proud to wear the Michi brand. 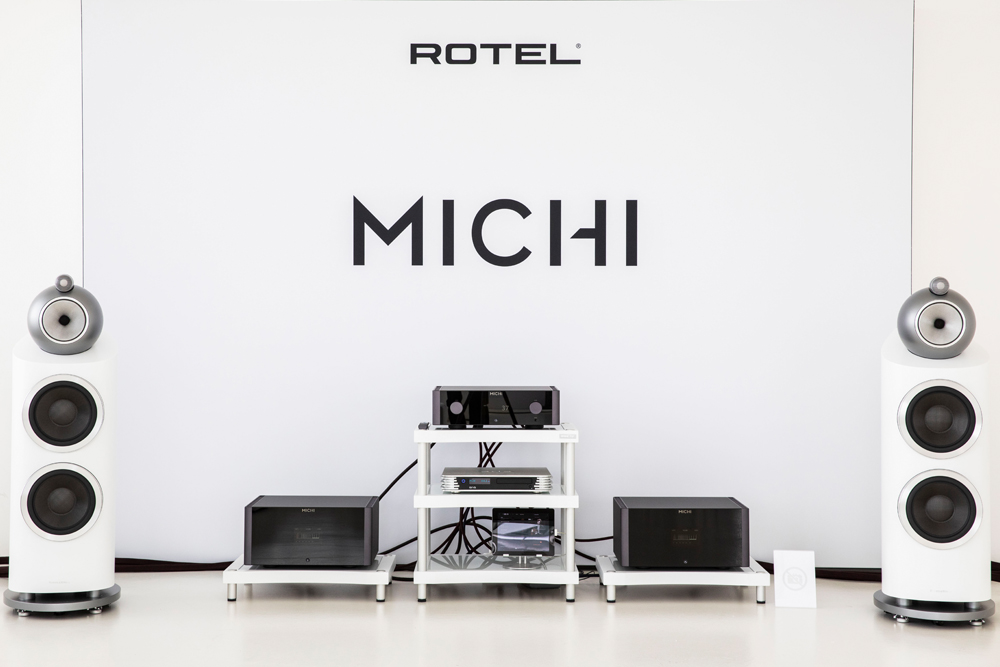 The new Michi series comprises five models: the P5 preamplifier ($3999), S5 stereo amplifier ($6999), M8 monoblock amplifier ($6999 each), and two recently released integrated amplifiers called the X3 ($4999) and X5 ($6999). Having read about Michi products and reviewed the Michi M8 monoblock amplifiers for SoundStage! Ultra, I’m familiar with how Rotel has marketed the Michi nameplate, and how consumers perceive them as Rotel’s flagship series of products. But how does Rotel perceive them, and why, specifically, do they consider Michi products to be world-class? Orth had this to say about it:

Michi represents an opportunity to engineer and manufacture products that outperform in and above the class. Michi is a statement that delivers exceptional acoustic performance with the highest standards of build quality elegantly packaged at an extremely attractive price point. This same dedication, commitment, and passion drove every aspect of the new Michi series, requiring an even higher standard to ensure the legacy of Michi was delivered in the new series. Simply put, mission accomplished because the resulting products are indeed world-leading and world-class. 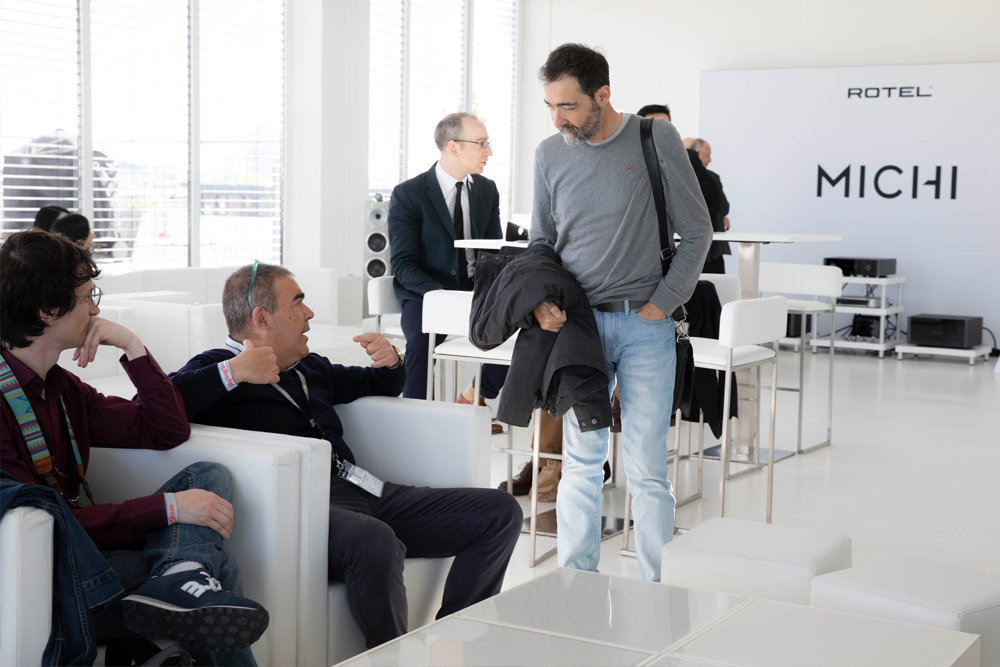 Hearing that a designer, engineer, or in this case CTO considers the company’s products to be world-class is all too common these days. But having reviewed the M8 monoblocks and experienced their exalted levels of build quality and performance, I knew Orth wasn’t saying it because he was expected to; these are indeed major players. With that in mind, I politely prompted Orth to dive into the nitty-gritty and tell me what elevates Michi both physically and technically above other Rotel products. Orth began by highlighting how the engineering teams engaged in the development of Michi and took great care to review the original Michi products, researching over 59 years of Rotel history: 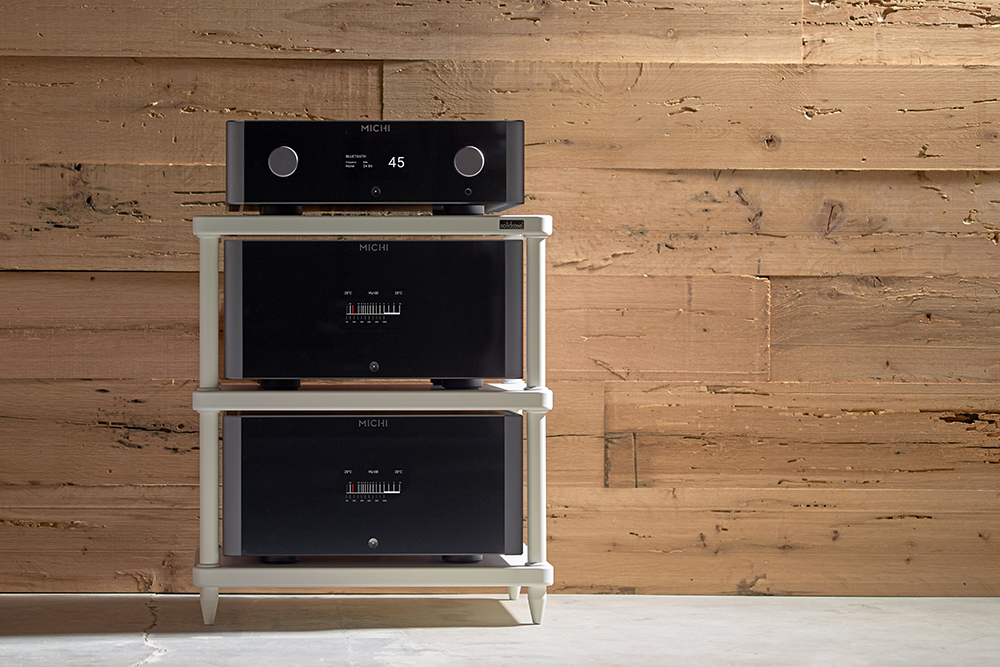 After taking over three years to develop the P5, S5, and M8, Rotel asserts that every aspect of each component received heavy scrutinization involving an exhaustive study of the modern supporting technologies. Some of the more specific design innovations include enhancements to power supplies for greater efficiency, circuit layout and signal-path optimizations, meticulous selection of all critical components, and countless hours of listening supported by bench-test results. I found it interesting that, rather than being assigned absolute design requirements, Rotel engineers received a series of questions to help them derive their own limits for design capability and then build from there. To support this approach, Rotel granted its engineers carte blanche in terms of budget and development timeframes. The results are the Michi products we have today, products that Rotel considers tributes to the entire engineering team.

While discussing the details, Orth started with some of the new developments within the P5 preamplifier. He noted that the P5 utilizes dual in-house-manufactured toroidal transformers to isolate the supply of power to the digital and analog circuits. These transformers feed a bank of high-efficiency low-ESR slit-foil smoothing capacitors that ensure ripple-free current is supplied to 17 independent voltage regulators in an effort to further isolate the power to all critical circuits. The P5 offers 16 source inputs, including balanced and unbalanced inputs and outputs, a moving-coil and moving-magnet phono stage input, seven digital inputs including USB (32-bit/384kHz compatible) with MQA decoding, plus aptX and AAC streaming over Bluetooth. The P5 is also equipped with twin AKM 32-bit/768kHz digital-to-analog converters to process all incoming digital signals, and a class-A preamplification circuit capable of 18V of dynamic range. 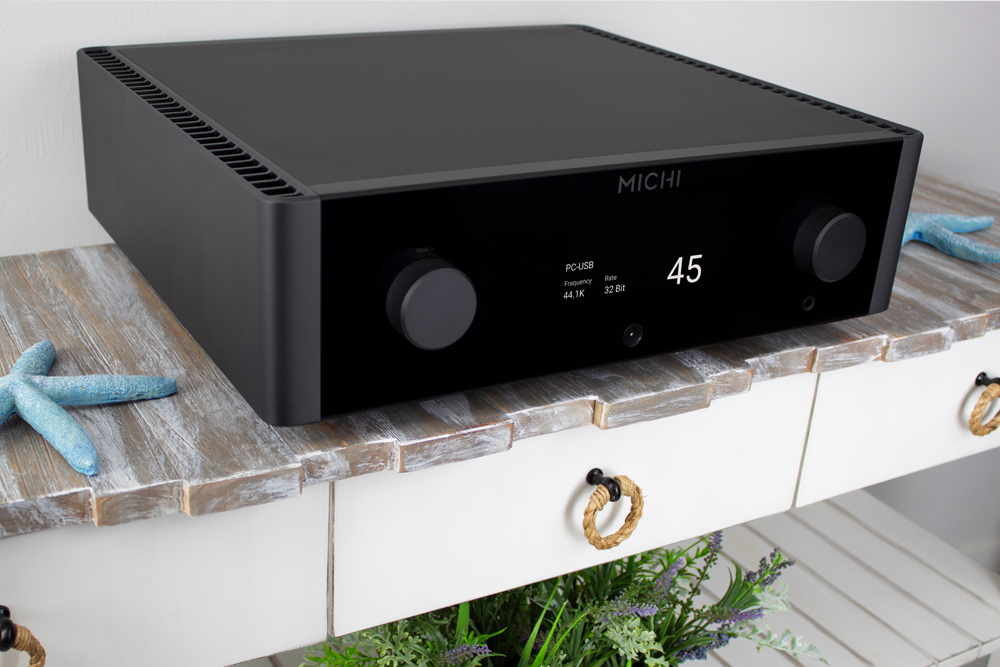 We then moved on to the S5 stereo amplifier and M8 monoblock amplifiers, which produce a whopping 800Wpc and 1800W, respectively, into 4-ohm loads, supported by in-house-manufactured oversized toroidal transformers. The power supplies of each amplifier feed quad-aligned BHC box storage capacitor arrays feeding 32 high-current output devices. Having reviewed the M8s, I can report that the build quality and material selection are exemplary. The crisp front-panel displays and menus across all Michi products are also as easy to read as they are intuitive to use. When I mentioned my impressions of the M8 monoblock amplifiers, Orth progressed from technical to strategic aspects of the brand, leading to what makes Michi not better, but perhaps more competitive, than other brands.

The development of Michi was not focused on a target price or specific level of performance. The design strategies for Michi were all about achieving a higher level of performance and value of the products. While the audio market today has many exceptional products at nearly every price point, Michi is unique, delivering uncompromised quality in every aspect. Every Michi (and Rotel) product is built in our dedicated in-house manufacturing facility to ensure it meets the strictest of standards. Vendor qualification and the incoming and outgoing quality-control processes play a critical role in the success of Michi. The resulting products deliver on the objectives, including the features, performance, and quality, positioning Michi in a unique and enviable class of its own. 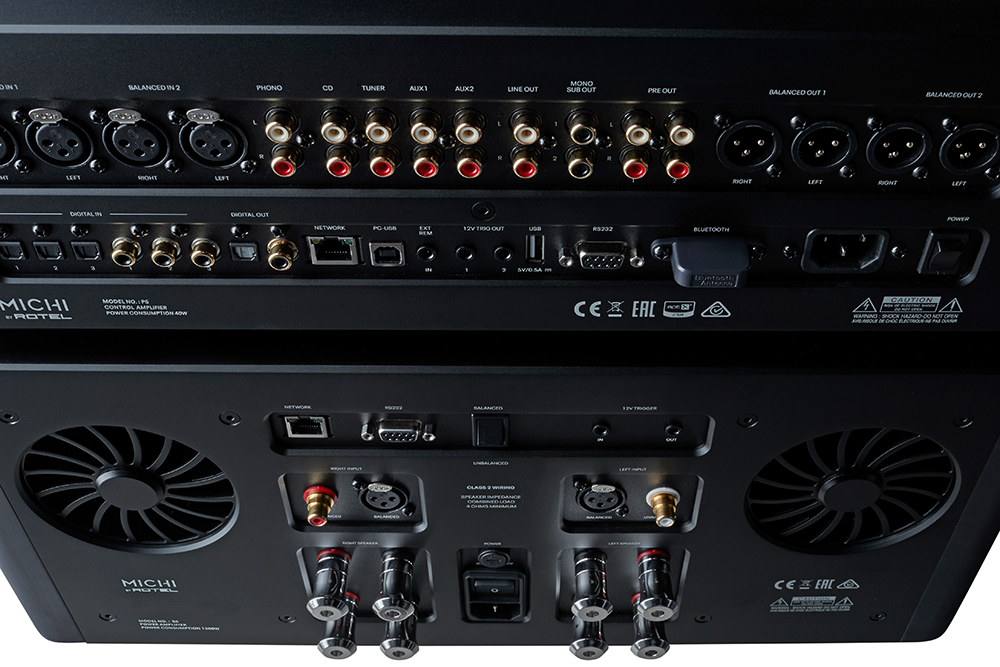 In penning this article, working with Orth, and learning about the philosophy behind all Michi products new and old, I’ve come to appreciate what Michi represents for the brand; it is the company’s best interpretation of what happens when science meets art. With five Michi products currently available and a few more on the drawing board, the future of Michi looks promising, and I’m looking forward to what comes next.