When I reviewed the original NAD Masters M17 surround-sound processor six years ago, I admired its exceptional sound and high quality of construction, but I found that the Audyssey MultEQ XT room correction was good with movies but just okay for music. It also didn’t support the recently announced Dolby Atmos object-based surround-sound format, so I thought it offered good but not outstanding value at the time. However, a couple of years ago, NAD introduced the M17 V2. I didn’t take much notice at the time, but I should have. Not only did the V2 version include Dolby Atmos and DTS:X object-based surround decoding, but it also featured Dirac Live room correction and support for the BluOS streaming system. And best of all, for those who had previously purchased the original M17, it was upgradable to V2 status simply by replacing two of its MDC modules, a refreshing change from the usual obsolescence of most surround-sound components after just a few years. 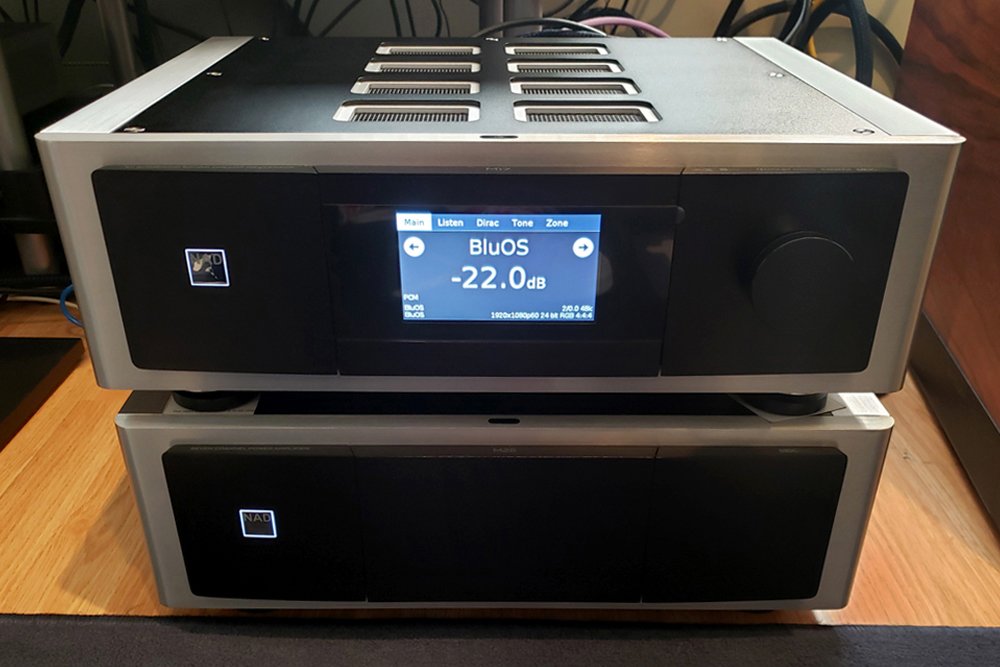 So when I recently took delivery of a review sample of the new NAD Masters M28 multichannel amplifier, which features Purifi Eigentakt amplifier technology, NAD also sent along the latest version of its M17, the V2i ($6599 USD), which adds Apple AirPlay 2 capability, so that I had the company’s best surround-sound processing to go along with its best multichannel amplification. I must admit, I was much more excited to receive the Purifi-based M28, which you’ll just have to wait to read about in my upcoming review for SoundStage! Access. Nonetheless, once I started using the latest version of the M17 processor and got reacquainted with its superb sound and discovered its new features, I was very impressed and thankful that NAD had sent me one.

The M17 V2i is based on the same chassis as the original M17’s, but it comes with the latest AM17 and VM310 MDC modules. If purchased separately as upgrades, the AM17 and VM310 modules cost $699 and $649, respectively. The AM17 module features support for Dolby Atmos, DTS:X, and Dirac Live room correction. I first used Dirac Live in NAD’s fabulous-sounding M33 integrated amplifier, and I found that it’s a fantastic and transparent room-correction system suitable for high-end audio systems, much like Anthem’s ARC and Lyngdorf Audio’s RoomPerfect. You can see in the accompanying photo that, because the AM17 module provides the object-oriented surround capability, the line-level outputs for the height channels are on mini-XLR jacks to fit on the module. While this is a bit inconvenient, mini-XLR-to-XLR adapters are provided, and NAD deserves credit for offering this upgrade path for its products (the AM17 module is also compatible with the M15HD surround processor). 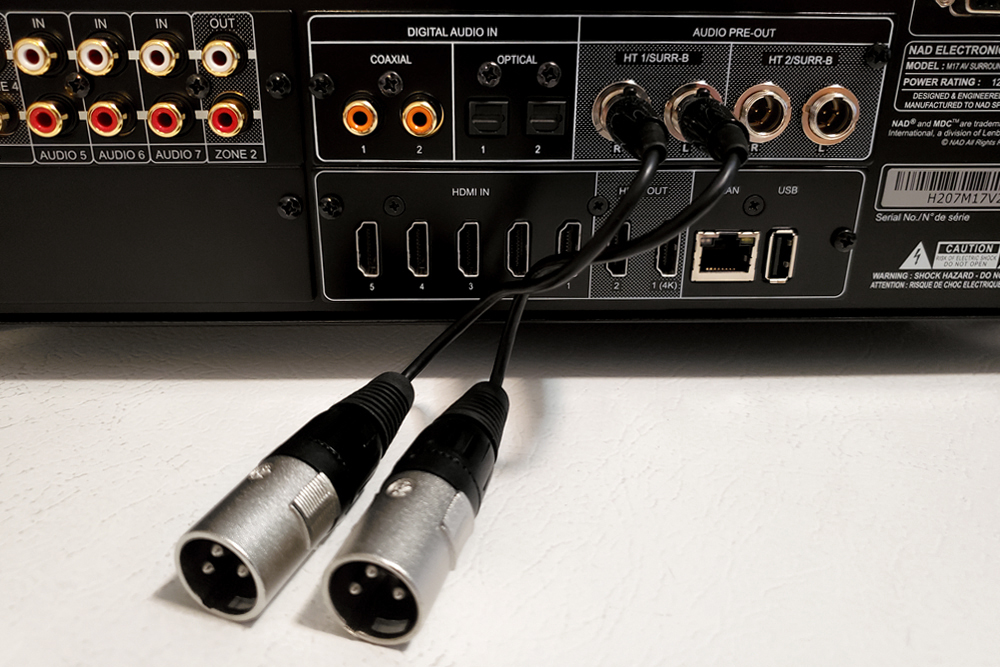 The original M17 didn’t support object-oriented surround formats, and I didn’t have a speaker setup with height channels at that time anyway. But I do now, so I took advantage of this new capability of the M17 V2i and hooked it up in a 5.2.2 speaker configuration with the M28 amplifier. The height speakers in my system consist of MartinLogan Motion 4s, which are essentially the same as the excellent-sounding Motion 4i speakers that Vince Hanada says are his go-to bookshelf speakers. They provide a good sonic match for my MartinLogan Classic ESL 9 mains and ElectroMotion ESL C center-channel.

The other upgraded MDC module, the VM310, adds not only 4K UHD video capability but also compatibility with the BluOS adapter, including AirPlay 2, and it can be fitted to several of NAD’s processors and receivers. When I first used BluOS with the M33, I didn’t think I would like it all that much, but I quickly got accustomed to its relatively simple and intuitive interface, its Qobuz and Tidal compatibility, and its stability on multiple platforms (I used it on Windows, MacOS, iOS, and Android devices). All of NAD’s BluOS-enabled products also feature MQA (Master Quality Authenticated) support. Having to use a BluOS adapter, rather than having it built into the processor itself, is a bit awkward, but again, I admire NAD for making the BluOS upgrade available for pre-existing products. For those upgrading an older M17, the BluOS adapter is available for $149 to use with the VM310 MDC module. The adapter is included with the purchase of a new M17 V2i. 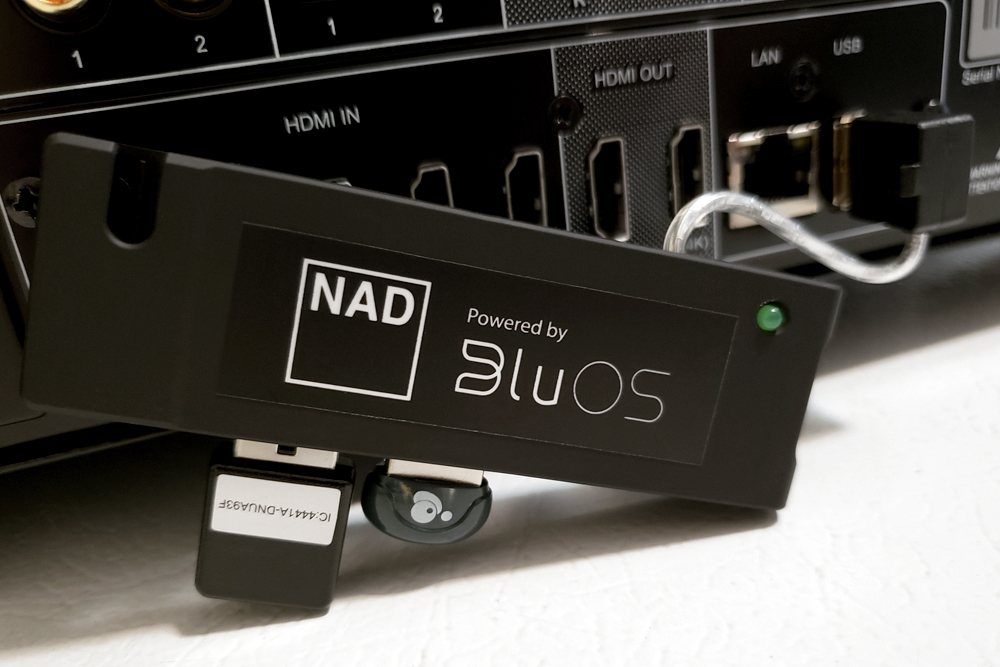 I found the inclusion of Dirac Live room correction to be a worthwhile upgrade over the original M17’s Audyssey room-correction system. As with other high-quality room-correction systems such as ARC Genesis and RoomPerfect, I can’t imagine not using them for both movies and music, including the use of subwoofers if you have the capability.

After calibration with Dirac Live, the sound of the M17 V2i was, in a word, spectacular. With both movies and music, utilizing two JL Audio E-Sub e112 subwoofers, Definitive Technology BP9080x speakers as surrounds, and the aforementioned MartinLogans, the NAD Masters combo provided reference-quality performance. The Dolby Atmos version of R.E.M.’s Automatic for the People (25th Anniversary Deluxe Edition) (Blu-ray, Universal) had stunning depth, width, and height. Most of the voices and instruments were spread widely across the front of the soundstage, but there was subtle expansion of the soundstage to the sides, back, and rear of the room. Comparatively, with my less-than-half-the-price Anthem AVM 60 ($2999, discontinued), not only was the soundstage less expansive, but Michael Stipe’s voice, while placed precisely and solidly at the front of my room, sounded slightly veiled in comparison. To be fair, the NAD is much more expensive than the Anthem, and Anthem has recently announced two new surround-sound processors, including the AVM 90 ($6999), which should give the M17 V2i a run for its money. However, the Anthems do not appear to be upgradeable, and my AVM 60 has in fact been discontinued and replaced by the AVM 70 ($3499). 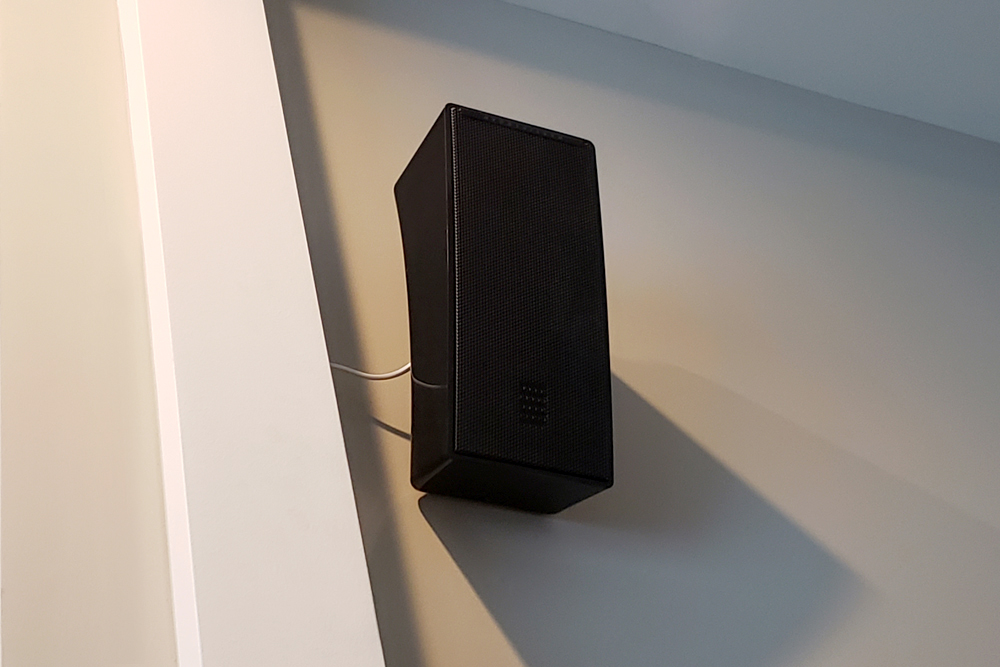 I also loved listening to stereo music through the M17 V2i, which is Roon Ready, and I found it extremely convenient to connect it wirelessly through my home network with the BluOS adapter. I enjoyed listening to music through the M17 V2i and M28 so much that I didn’t miss listening to my reference Anthem STR Preamplifier and M1 amplifiers. What’s more, the NAD Masters combo reminded me very much of the performance of the outstanding Masters M33 integrated amplifier-DAC ($4999), which recently received a SoundStage! Network Product of the Year award for Innovation in Design, but with the added advantage of having object-oriented surround processing and seven channels of amplification to provide the same spectacular sound quality when you’re watching movies and listening to multichannel music.

I’m glad that NAD sent me a sample of the M17 V2i to try in my system. I was a little skeptical about the utility of NAD’s MDC when I first reviewed the M17 six years ago, but after getting familiar with the latest version of the M17 and its MDC-based upgrades, I’m thoroughly impressed by what NAD has accomplished with this version of its flagship processor. At its price of $6599, the upgradeable NAD M17 V2i is hard to beat as the centerpiece of both a high-end multichannel and stereo audio system. If I were in the market for a new surround-sound processor today, I would definitely purchase the M17 V2i, and I might even think twice about the need to have a separate high-quality stereo preamplifier for music. And if you need any further evidence of NAD’s commitment to continually improving its products with MDC, the company plans to address the M33’s lack of a USB audio input, something that I and several other reviewers commented on, with the introduction of an MDC module with USB audio input. Also, be sure to look for my review of NAD’s Purifi Eigentakt–based Masters M28 multichannel amplifier in the upcoming months on SoundStage! Access.