A recent business trip took me to Canada’s national capital, Ottawa. In addition to being the political center of Canada, it’s the home of the National Research Council, where SoundStage! performs its loudspeaker measurements. It’s also the location of electrostatic loudspeaker manufacturer Muraudio.

You may already be familiar with Muraudio’s products such as the PX1 and SP1 loudspeakers, both of which Doug Schneider has reviewed on our SoundStage! Hi-Fi site. So during my time in Ottawa, Doug arranged for me and fellow SoundStage! reviewer Diego Estan (Doug and Diego both live in Ottawa) to join him in visiting Muraudio’s Rob Runolfson, the company’s CEO, and Murray Harman, its founder and CTO, at the Muraudio factory to see how the company designs and manufactures its innovative speakers. 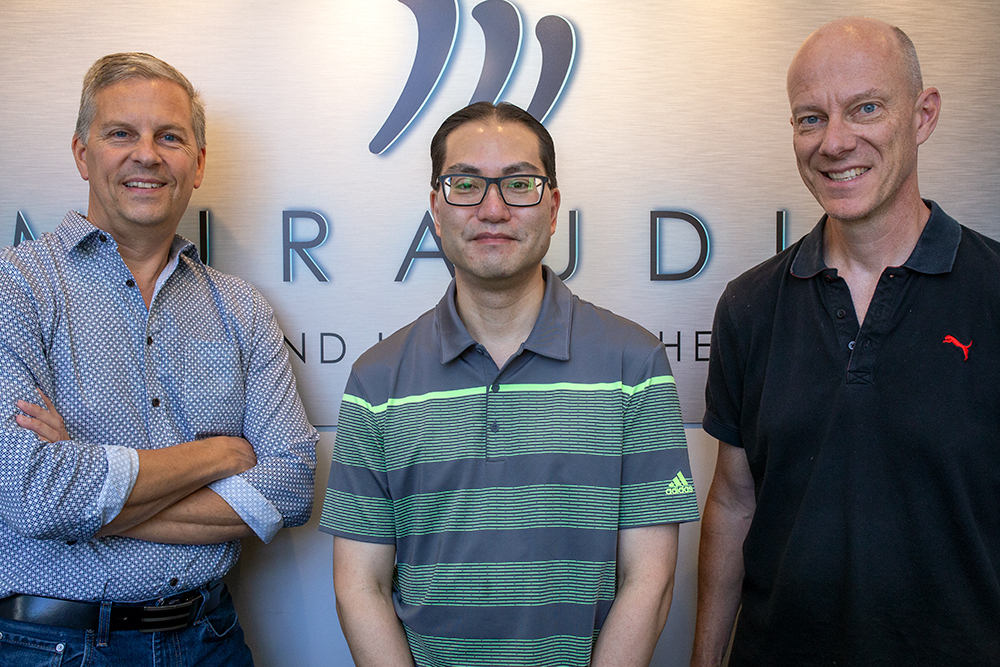 For those unfamiliar with Muraudio, the company has been around for about six years, and it produces hybrid electrostatic loudspeakers with some unique twists. Its first model was a fully active, omnidirectional design named DA1 (discontinued), followed by a passive version named PX1 (discontinued) that has now been superseded by the PX2, which starts at $54,900/pair (all prices USD), depending on the finish. All of these models use three of Muraudio’s electrostatic panels and three 9" woofers. More recently, the company introduced the SP1, priced at $16,400/pair in the standard painted or wood finishes (custom finishes are available for more). The SP1, a partially dipolar (equal sound is radiated front and rear, but out of phase) hybrid electrostatic design, so impressed Doug that we gave it a SoundStage! Network Product of the Year award in 2018. It uses one of Muraudio’s electrostatic panels and four bespoke 5" midrange-woofers.

For a comparatively small company, Muraudio has an impressive design and manufacturing facility. The crossovers are made from what Runolfson described as “regular stuff,” but very high-quality “regular stuff” from what I could tell -- air-core inductors and Mundorf capacitors were obvious. Otherwise, there’s not much “regular” about the company’s speakers, as can be seen by their electrostatic panel, which we were able to inspect in various stages of production. In addition to having a 120-degree curve on the horizontal plane, the panel is also curved vertically by 16 degrees to further expand its vertical dispersion pattern. 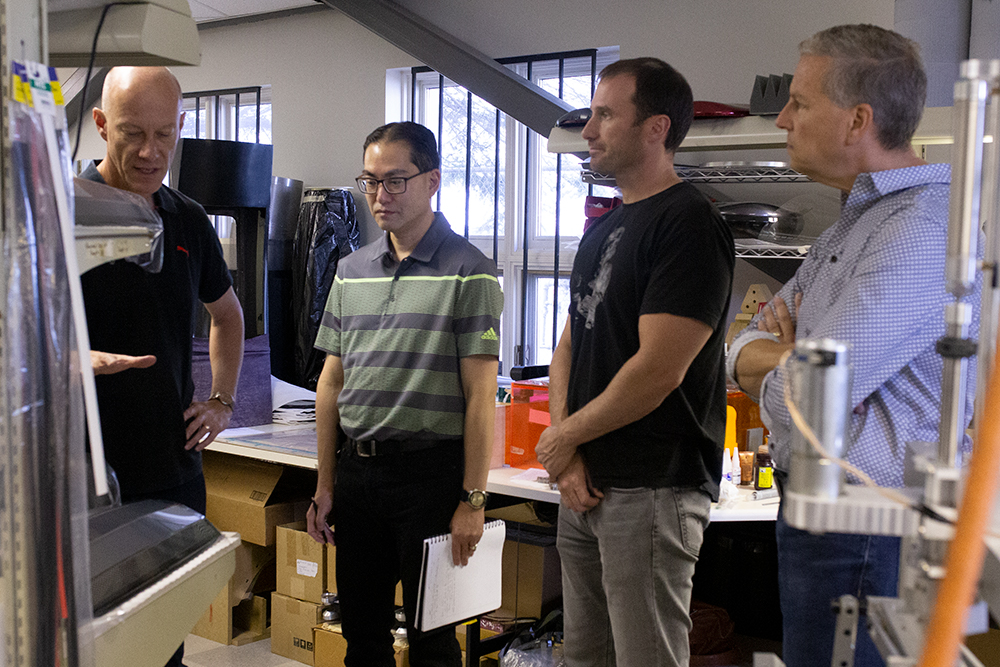 Muraudio is very proud of how its stators (the metal grids on either side of the thin Mylar diaphragm that makes up the electrostatic panel) utilize a proprietary process to round the edges of the holes that are cut into them during production. Powder coating on the stators prevents arcing between them and the diaphragm due to the high voltages involved. Harman says that by rounding the edges of the holes, they can achieve a more uniform powder coat, resulting in much better power handling than a normal electrostatic panel has.

Exactly how this hole rounding is done is a trade secret -- Harman has designed and built a pneumatic forming machine that we weren’t allowed to photograph, but I can tell you that it’s kind of cool to watch it do its thing. Muraudio builds many of the components in its speakers in-house, including the panels and the aluminum grilles that its CNC machine was making at the time of our visit. The aluminum bass cabinet for the PX2 and the wood cabinet of the SP1, however, are made by local manufacturers. 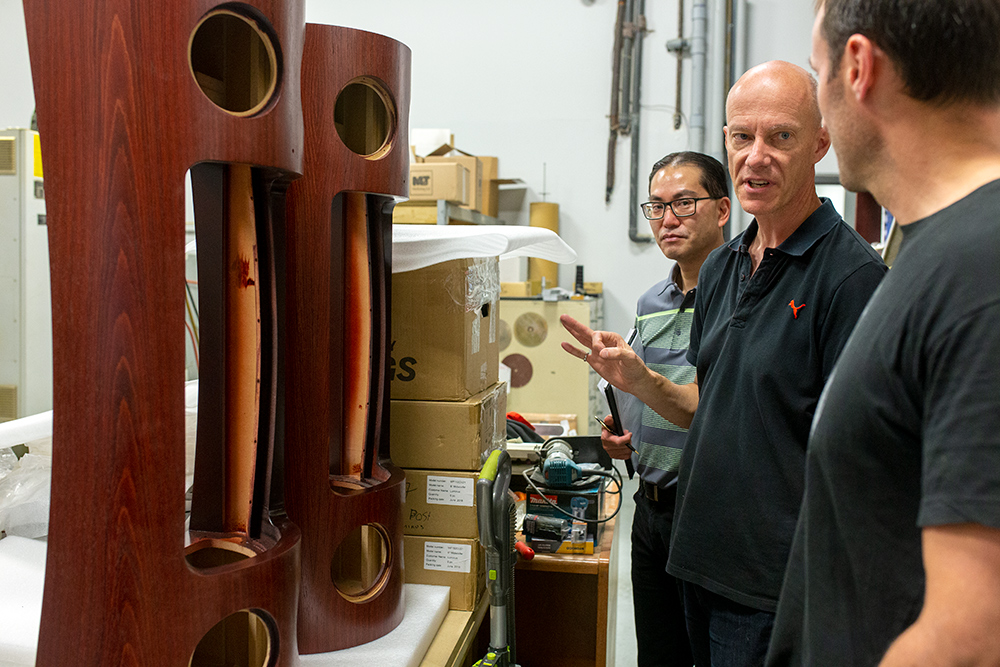 To aid in the design and quality control of its products, Muraudio also has an anechoic chamber on its premises. It isn’t a full anechoic chamber, since it has a traditional floor, but when the door was closed, I experienced that same disorienting feeling that comes from the lack of reflected sound that I’ve heard in other anechoic chambers. 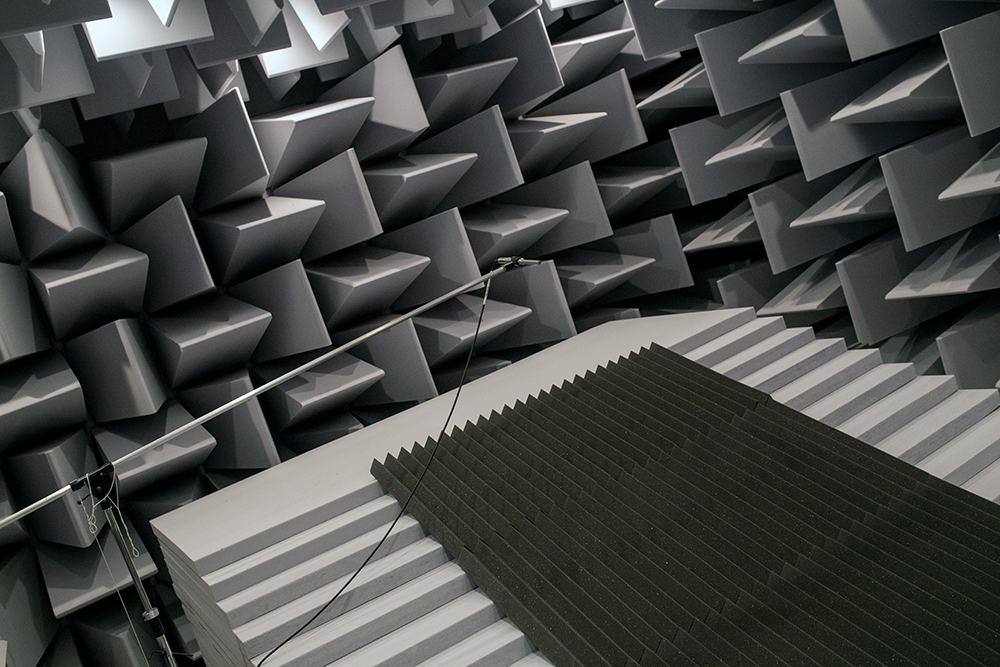 After seeing how Muraudio builds its loudspeakers, we moved on to the listening room, which contained both the SP1 and PX2 models, along with various electronics from Simaudio, Hegel, and Triangle Art. In use for our listening session with the SP1s was Hegel’s excellent H360 integrated amplifier-DAC.

As Doug mentioned in his review, the SP1 looks a little strange with its four midrange-woofers placed symmetrically both above and below the electrostatic panel. Harman said that this results in a driver array that acts more like a point source than if the woofers were simply placed below the panel. This configuration, accompanied by the dipolar dispersion pattern of the panel, is said to provide a deep and wide soundstage with precise placement of images within it. 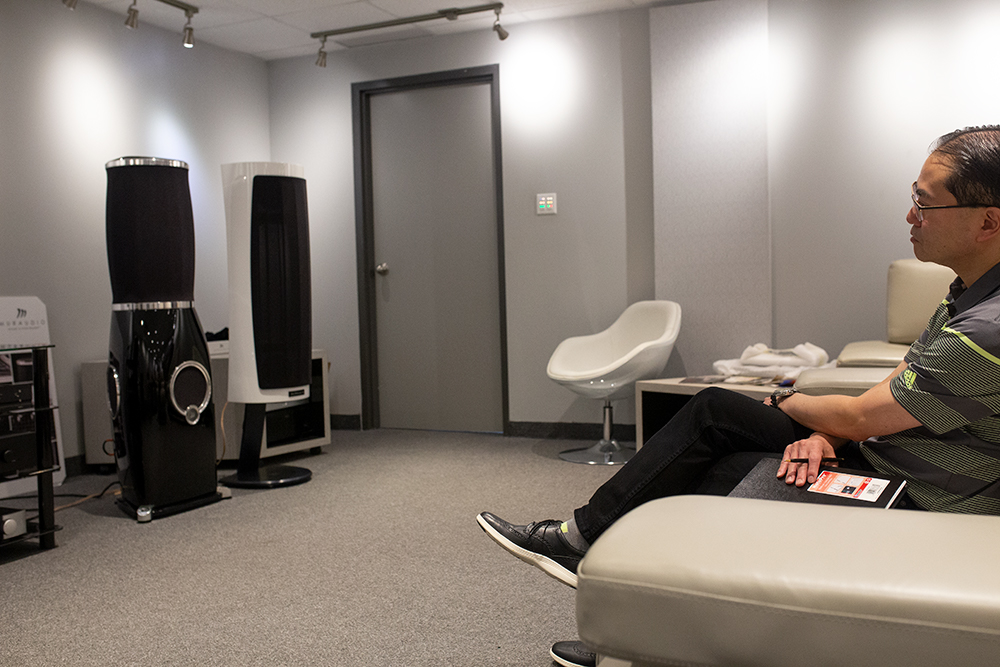 Indeed, as I sat down and listened to Jazz at the Pawnshop being streamed into the H360 from a small Samsung laptop, the opening percussion and crowd noises seemed to emanate from farther back in the soundstage and had a wider presentation than I’m accustomed to with my hybrid electrostatic MartinLogan Masterpiece Classic ESL 9s. There was also a wonderfully coherent quality with the four midrange-woofers blending seamlessly with the electrostatic panel -- a coherence that I have never quite experienced before with a hybrid electrostatic design. The aural images didn’t have laser-like outlines, but they were solid and well-delineated from each other within a vast, lifelike soundstage.

The midrange-woofers, with their 5" cones, are made to Muraudio’s specifications. According to Harman, they have a maximum excursion of 20mm (0.79"). With four of them in an SP1, each one presumably doesn’t have to work very hard to produce the required output, resulting in greater linearity and lower distortion overall. Listening to a couple of Doug Schneider’s favorite tracks on that day, “Gabriel’s Oboe,” from The Mission: Original Soundtrack from The Motion Picture, and the title track to Sade’s Soldier of Love, I heard low frequencies that were fast, tight, and plenty deep. They weren’t quite as deep as that of my ML ESL 9s, which have dual 8" woofers, but the bass they reproduced (just below 40Hz, I’d guess) was beautifully integrated with the mids and highs of the electrostatic panel. 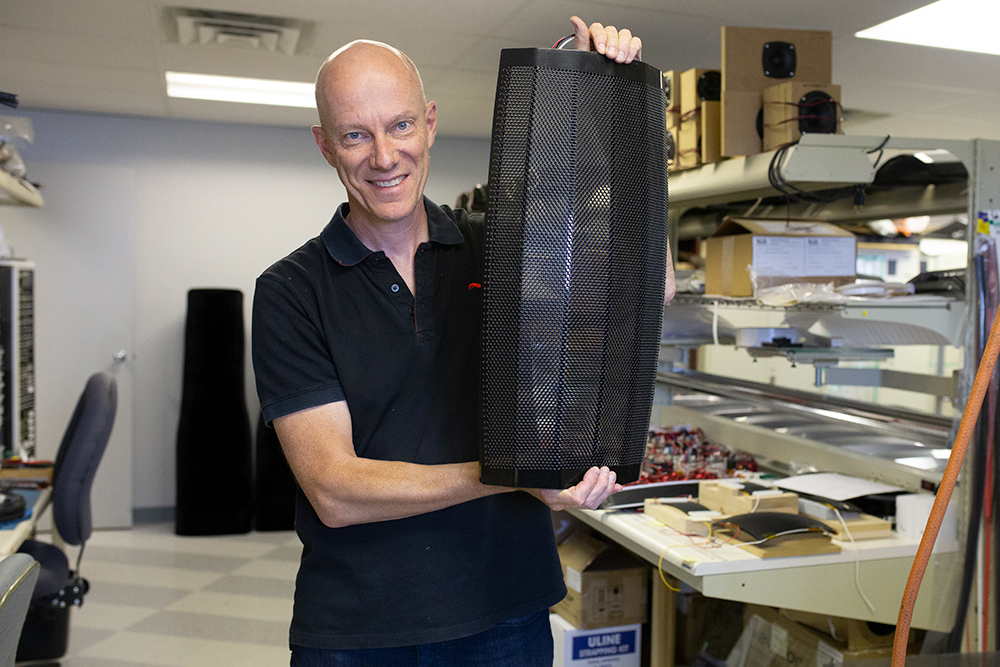 Doug raved about the SP1 in his review, calling it “wonderful sounding . . . wickedly clean and natural.” After hearing this unique speaker, I couldn’t agree more. I’m glad to have had the opportunity to visit Muraudio and speak with Rob and Murray about their products. They also said they have new products planned, but they couldn’t be more specific, as they’re still under development. With my newfound appreciation for Muraudio, I’ll be sure to seek out these new products when they’re introduced.