Andrew Singer was, of course, on hand. Representing Gryphon and leading the event was Philip O’Hanlon from On a Higher Note, Gryphon’s North American distributor. One of the audio industry’s more colorful personalities, O’Hanlon is known for his fedora hats, bowties, and love of music and Irish whiskey. Attendees at his demos can look forward to hearing rare and interesting music, being regaled with fascinating stories about the recordings and musicians, and receiving a steady flow of said spirit. 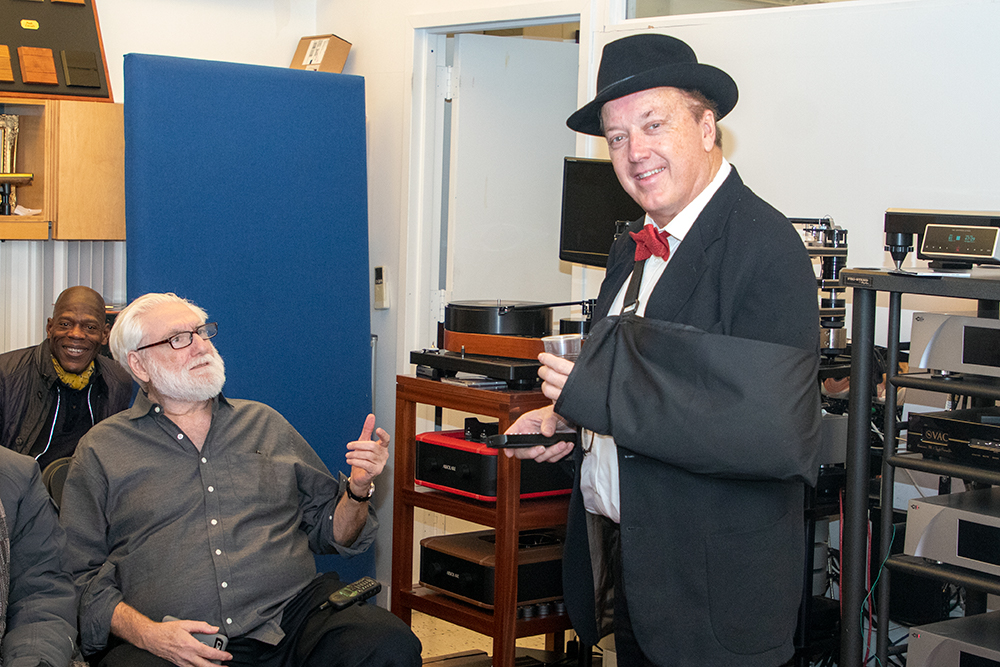 I’ve been to these types of manufacturer events before -- tubes versus solid state, analog versus digital, 16-bit/44.1kHz versus high-resolution digital files, and the like. No matter the exact matchup, the results have always been interesting. Not surprisingly, this event was no exception.

Gryphon’s flagship CD player/DAC, the Ethos, was designed by the company’s founder, Flemming E. Rasmussen, just prior to his 2018 retirement. SoundStage! Network founder Doug Schneider provided the skinny on the Ethos in his SoundStage! Hi-Fi article, “The Best of High End 2019.” As Doug stated, this top-loading player sports “superb build quality and dazzling industrial design.”

Summarizing the Ethos’s features, Doug remarked that “[a]lthough [it] plays only CDs -- no SACDs, at least not directly (read on) -- it’s still rich in features, with many digital inputs on its backside: USB, S/PDIF BNC, and two AES/EBU XLR.” Doug observed that “[i]t’s the [Ethos’s] USB input that supports the highest playback resolutions: up to 32-bit/384kHz PCM and DSD512.” I would add that DSD512, also called “octa DSD,” has a sample rate that is 512 times that of a Red Book CD. Doug explained that “DSD is the encoding scheme for SACD; if you’ve ripped your SACDs to files, you can play them through the Ethos’s USB port.” Finally, Doug noted that “[t]en user-selectable digital filters are available [on the Ethos]: seven for PCM, three for DSD.” 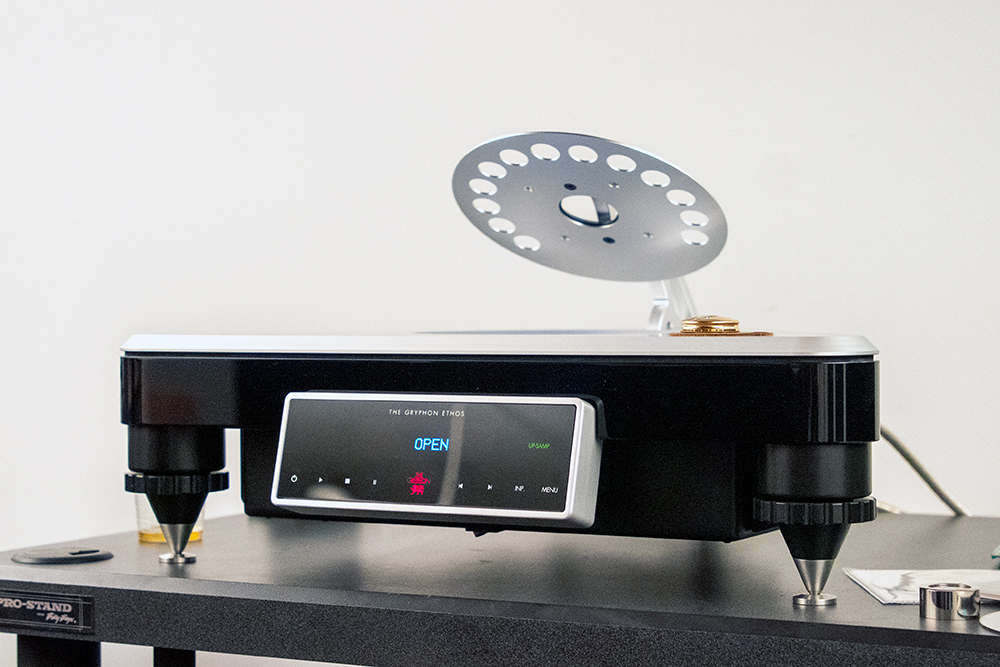 For present purposes, I would further add that the Ethos upsamples Red Book CDs up to 32/384 PCM or DSD128, the latter also called “double DSD.”

Representing the analog domain was Kronos Audio’s limited-edition Pro turntable ($42,000) with SCPD-1 super-capacity power supply ($15,000), unipivot Black Beauty tonearm ($9350), and My Sonic Lab Eminent EX moving-coil cartridge ($4000). Since this ’table’s $68,625 total package price is much more than the Ethos’s price, O’Hanlon may have put himself at a disadvantage. Indeed, with its multi-platform, layered construction, and dual counter-rotational platters, the Pro has a reputation for being one of the most accomplished turntables out there. Nonetheless, despite the cost difference, O’Hanlon was unperturbed. 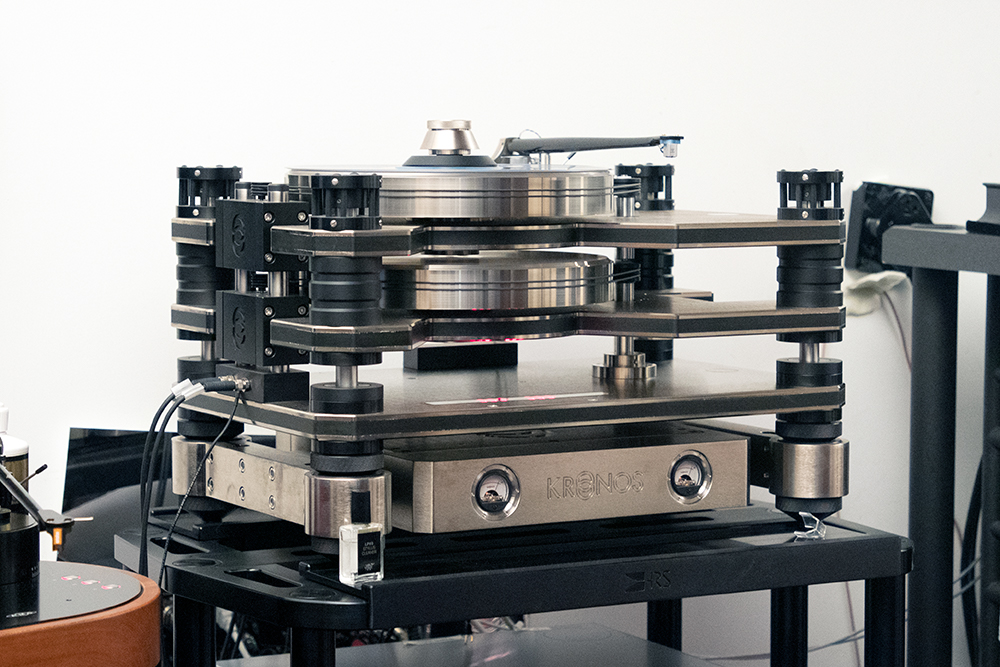 The rest of the playback system consisted of Gryphon’s Diablo 300 integrated amplifier ($16,000), a pair of Stenheim Alumine Five speakers ($58,500 per pair), and Analysis Plus interconnects and speaker cables (I was unable to get the model names and prices). The class-A/B, DC-coupled Diablo is rated at 300Wpc into 8 ohms, 600Wpc into 4 ohms, or 950Wpc into 2 ohms. It contains rear slots for optional DAC and phono stage modules ($6000 and $2250, respectively), the latter of which was used at the event with the Pro. The Alumine Five is a four-driver, three-way speaker with a 94dB rated sensitivity.

O’Hanlon kicked off the event by explaining that the evening’s agenda was to play the same performance on the Pro and then on the Ethos, the latter via a Red Book CD and then upsampling that CD to 32-bit/384kHz PCM to first hear it that way, then to DSD128 for another listen.

Of course, everyone has biases. I guessed that while the Ethos might operate most linearly, with less noise and with better bass control, the Pro decidedly would bring a bit more of the music’s organic soul and essence. Also, I’ve not been a huge fan of digital upsampling, finding that it can cause the sound to become overly thick and lose detail and transient impact. With a number of instances of DSD-level upsampling that I have heard, the sound became positively syrupy.

As O’Hanlon spoke, I thought, “let the chips fall where they may,” a sentiment that others in the room seemed to share. However, before I get to the matchup, I need to state a few words about audio-testing methods. 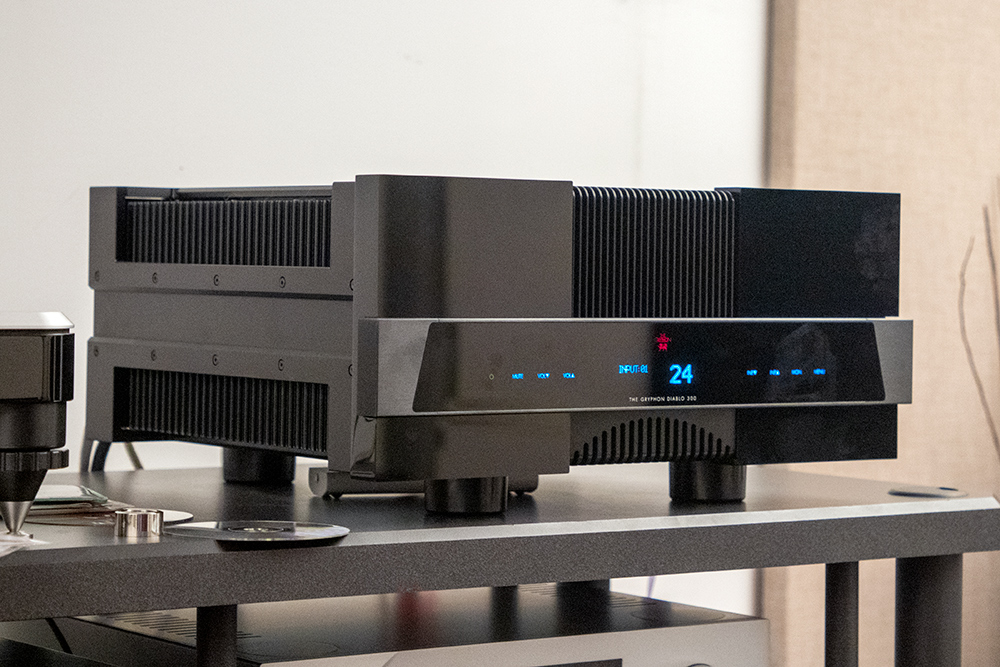 First, events such as these are not performed under strict scientific methods. For one thing, you can almost never be certain that the tracks being compared from format to format are from identical masterings. Indeed, for optimal sound quality, O’Hanlon stated, you should use separate masterings, with one optimized for each of the analog and digital versions.

Second, absent the use of a sound-pressure level (SPL) meter, it’s difficult to assure that the volume levels of the test pieces are identical. This is particularly true when switching preamplifier inputs, which we needed to do here.

Third, in an ideal world, all comparisons would use blind testing. We were listening while watching all the changes occur. 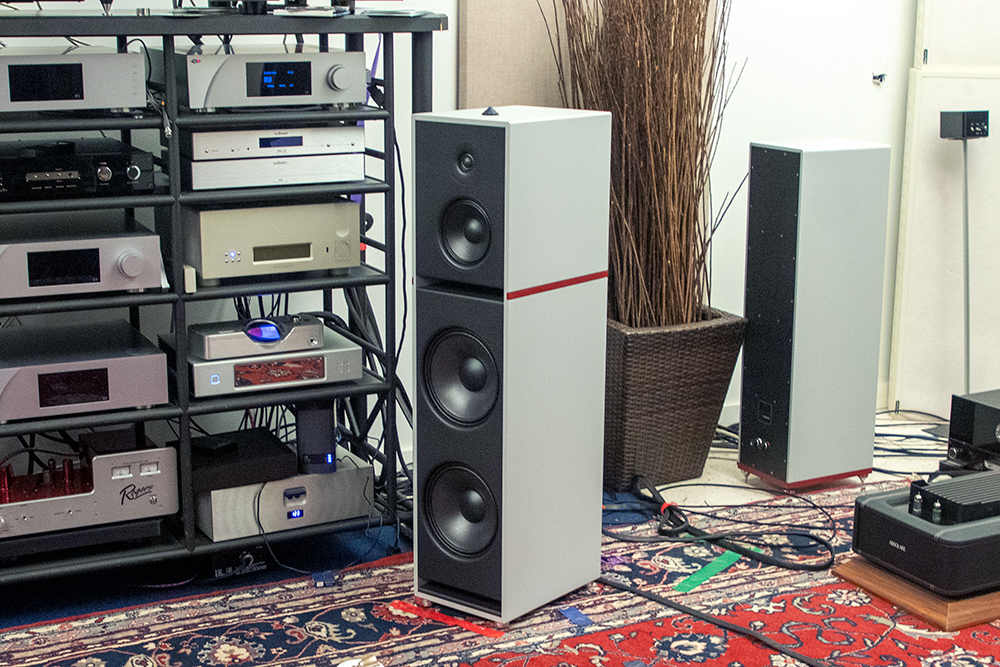 With those disclaimers aside, and recognizing that listening is a subjective experience, I think that events such as these are still useful, since patterns do inevitably emerge. They are also a lot of fun, which ultimately may be as good a reason as any to attend them.

While O’Hanlon played numerous pieces of music at the event, the two songs discussed below are good examples of what we heard.

With Chris Stapleton’s “Death Row,” (From a Room: Volume 1, Mercury Nashville), the Pro’s sound was beautifully open and airy, with pleasingly full bass frequencies. Indeed, the Pro’s bass bloom and sweetness came to the fore when it played the vinyl.

Moving to a Red Book CD on the Ethos, the sound was very good. The upsampled 32/384 PCM version was even better, demonstrating more detail and transient snap. Neither of those versions, however, captured the Pro’s bass fullness and midrange bloom. Then came the Ethos’s DSD128 rendition, which was a shocker. That version captured most of the Pro’s bloom and was sonically pleasing and alive while not sounding unnaturally thick. Furthermore, the Ethos’s DSD128 presentation hung together with fantastic linearity.

It was about that time that O’Hanlon broke out some 12-year-old Red Breast triple-distilled Irish single-pot still whiskey. How that may have slanted perceptions I am unsure, but we bravely continued. 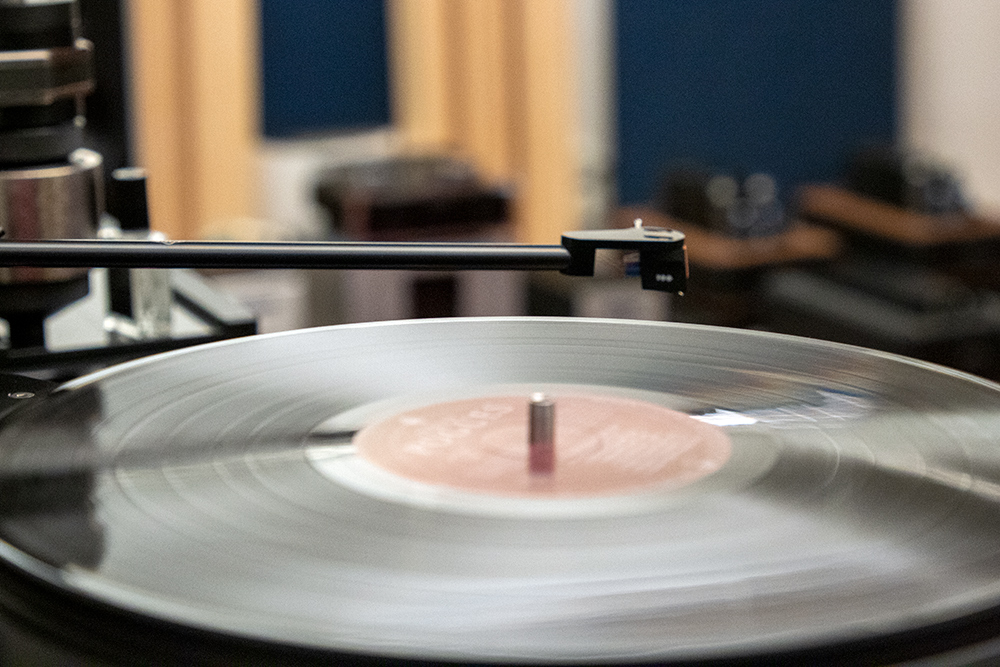 With “Here Comes the Sun,” from the 2019 Giles Martin and Sam Okell 50th-anniversary remaster of the Beatles’ Abbey Road (Capitol Records), the Pro’s sound was nothing short of gorgeous and intoxicating. Once again, its full bass and midrange development contributed to its absolutely lovely sound.

Turning once again to the digital versions, I found that the Ethos’s Red Book CD version was again no slouch, in this case sounding cleaner than its analog counterpart. It was the same story on this track for the upsampled 32/384 PCM version, which picked up detail and had better soundstaging than with the Red Book CD. Remarkably, though, the Ethos’s upsampled DSD128 version was incredibly clean, warm, and developed in the low frequencies, although the Pro still managed to somewhat better that version’s bloom by a bit. In a blind listening test, mind you, I doubt anyone would know that we were listening to digital. Also, the DSD128 version had even more depth and air than any of the other versions. 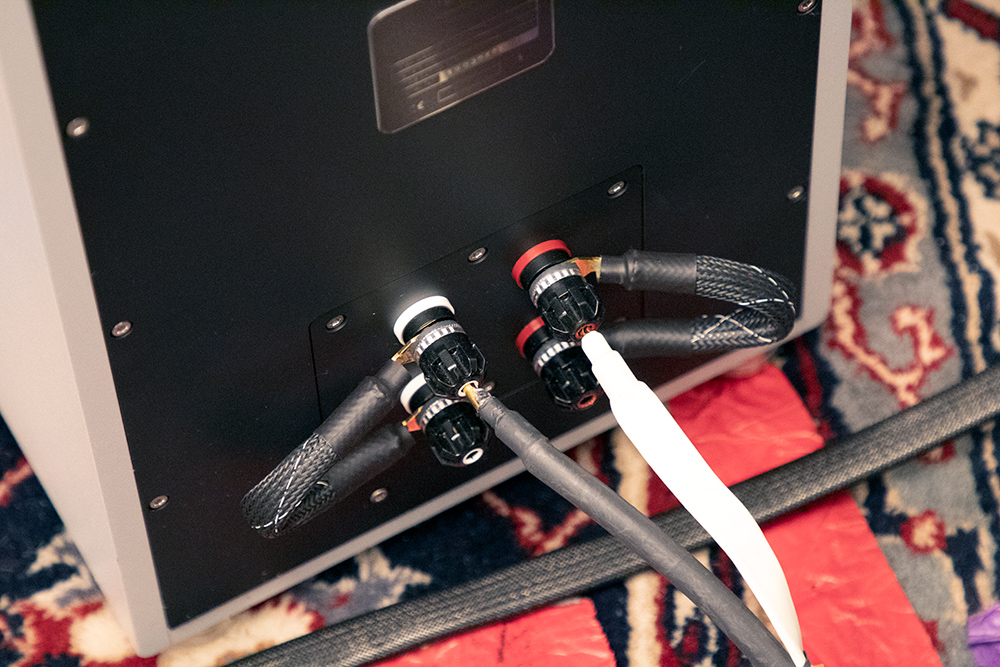 One aside: in Singer’s large listening room, the Stenheims generally sounded a bit light to me in the most subterranean frequencies (I use two massive JL Audio subwoofers at home). However, there could be no dispute that they too made an impressive showing and created sound that was exceptionally gorgeous, elegant, and refined. Although the Stenheims sounded great while we sipped the Red Breast, they could also have been paired with the most aristocratic of champagnes. Undoubtedly, the Diablo amp also contributed to the great sound that evening.

Differences of opinion with respect to analog and digital playback technologies will likely persist far into the foreseeable future. Undoubtedly, some of these differences are due to subjective listening preferences. However, the event challenged biases and suggested that at least during one set of tests, neither analog nor digital was superior in every way. Provided that your pockets are deep, the Gryphon Ethos CD player and Kronos Pro turntable will each take you to sonic nirvana. Further, if the primary purpose of the event was to have fun, Messrs. O’Hanlon and Singer accomplished it in spades.