Having only one unallocated day left to meet with audio manufacturers during my planned January 2020 trip to Japan, I called Andrew Jones, Elac’s vice president of engineering, for a manufacturer recommendation. Before joining Elac, Jones designed speakers for Japan’s Pioneer Corporation and its high-end subsidiary, Technical Audio Devices Laboratories, better known as TAD. Perhaps not surprisingly, Jones suggested that I contact TAD’s Tokyo headquarters, which I did. Shortly thereafter, January 16 was confirmed as the date of my visit.

I was to visit the Kawagoe facility, which is just under an hour by train from my usual Tokyo hotel, the Coco Grand Ueno Shinobazu. Located in the Ueno area of central Tokyo’s Taito district, the hotel offers a striking view of the 17th-century Shinobazu-no-ike Bentendo temple, which sits on an island in Ueno Park’s enormous pond. The hotel also serves a traditional Japanese breakfast that’s to die for. But I digress. 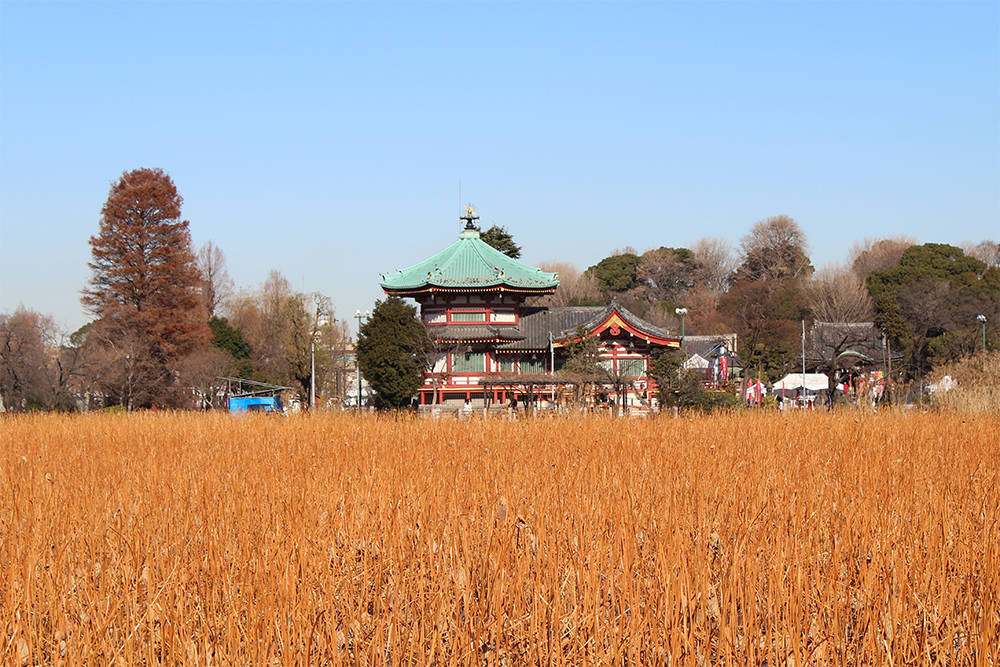 Kazuto Okura, a senior assistant manager in TAD’s sales and marketing department, met me at the local Kawagoe train station. From there, we drove about 15 minutes to the Pioneer factory, where I met Hiromitsu Numazaki, the manager of TAD’s design department, and Shinji Tarutani, the company’s chief technical officer and general manager. The first stop was TAD’s listening room, where my hosts took me through a PowerPoint presentation prepared for my visit.

Pioneer Corporation was established in 1937 when the company’s founder, Nozomu Matsumoto, developed Japan’s first high-fidelity speaker, the A-8. In 1975, Pioneer launched the TAD Project to provide recording studios and other professional customers with high-performance speaker drivers that would reproduce music with “the realism of the performance.” At about that time, Bart Locanthi, a well-known audio designer from the United States and former vice president of engineering at JBL, joined Pioneer and became the TAD Project’s design leader. 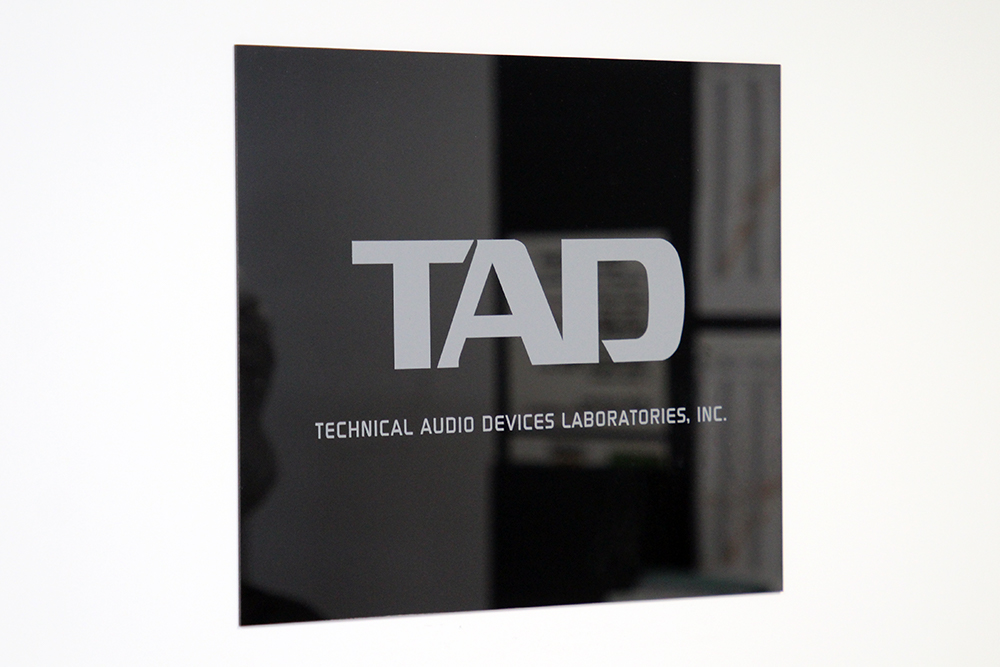 Over time, the TAD Project introduced several highly successful compression speaker drivers that have been used by more than 300 professional customers worldwide, including some very famous recording studios and musicians.

In 2002, TAD took aim at the home audio market when it introduced the first TAD-branded speaker, the TAD-M1. Like all TAD speakers, the TAD-M1 featured a tweeter and midrange driver in a coaxial arrangement. The TAD-M1 had a tweeter dome made from beryllium, a material used for all TAD tweeters ever since, as well as a beryllium midrange cone, which the company still uses in all its current Reference-series speakers. 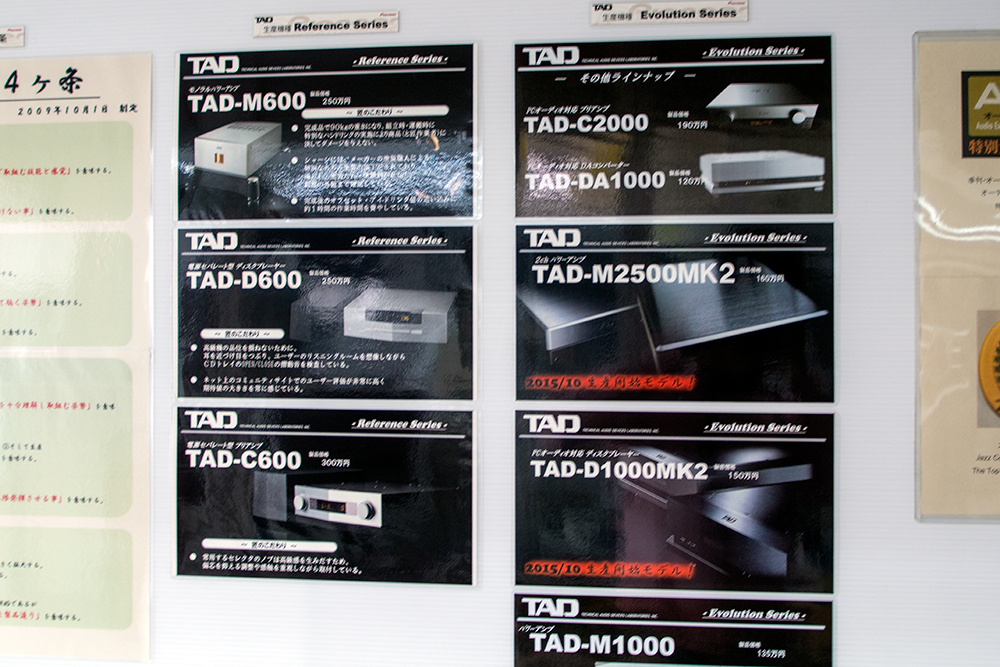 In 2007 the TAD Project was spun off as a wholly owned Pioneer subsidiary, and it introduced a digital-to-analog converter (DAC) and numerous preamplifiers, power amplifiers, and CD/SACD players. These components, divided into two model lines -- Evolution and the more expensive Reference -- feature such things as dual-mono circuitry and bespoke parts that are designed and manufactured in-house. For example, TAD’s disc players and freestanding DAC use a proprietary ultra-high-precision crystal oscillator that’s said to dramatically reduce noise and jitter, thus rendering an external master clock unnecessary.

Employing over 3000 people, Pioneer’s immense factory manufactures, among other things, car audio systems and GPS navigational devices. However, within that factory is a nondescript building that houses TAD’s factory, a small operation that produces high-end audio products. In fact, TAD’s factory has only two production sections -- main assembly and inspection -- each of which is staffed by one highly trained TAD worker at a time who is certified by TAD in three areas: safety, skill, and inspection (quality control). 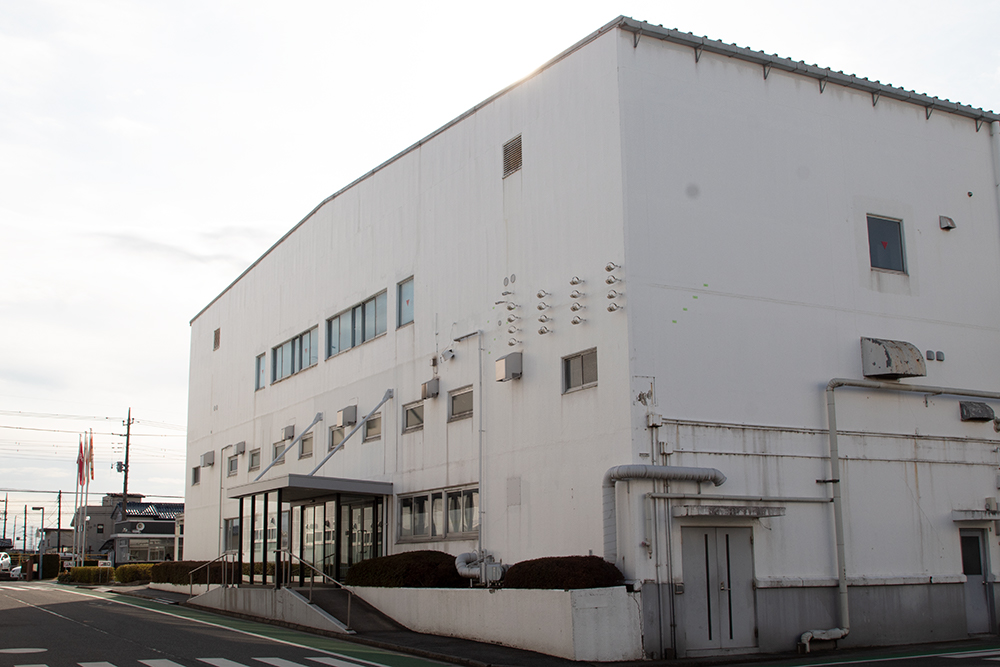 As we entered the factory, we saw through large glass windows the manufacturing floor, which consists of clean rooms of varying ISO particulate limit levels. As luck would have it, a TAD-D1000MK2 CD/SACD player was being assembled. My hosts and I put on white clean-room garb -- anti-static slippers, hats, and lab coats -- and we entered the floor. 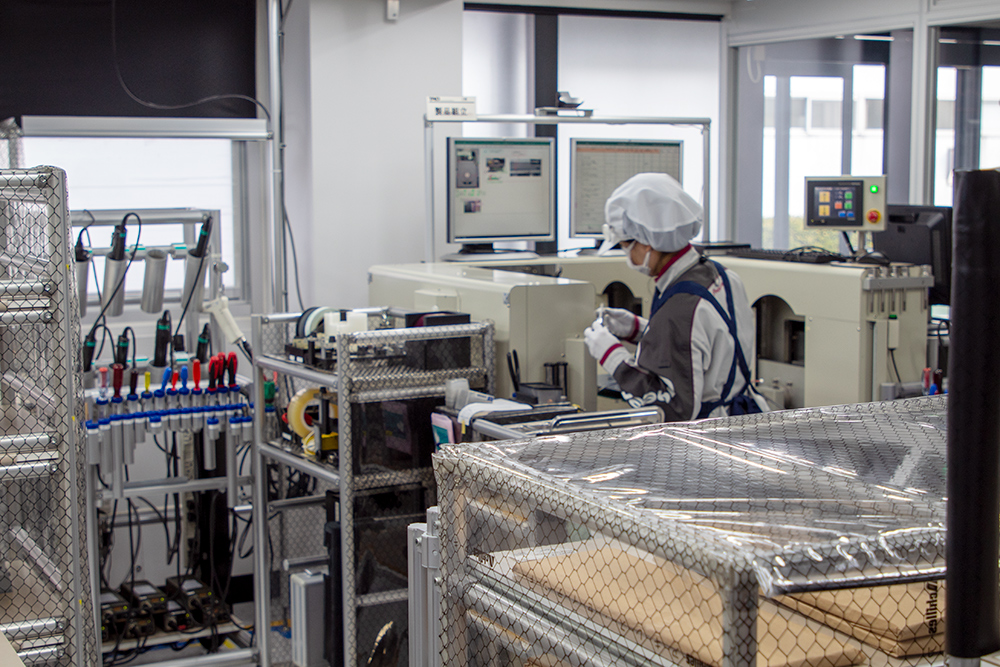 The assembly process for the TAD-D1000MK2’s electrical and nonelectrical parts was painstaking, with physical fit tolerances of up to 1/100th of a millimeter. As I witnessed, gloved hands, mechanical tools, and/or electrical measuring equipment repeatedly tested the unit for things like physical construction, circuit integrity, and unwanted vibration. The mechanical tools looked like the type of precision instruments that could be found in a hospital operating room. 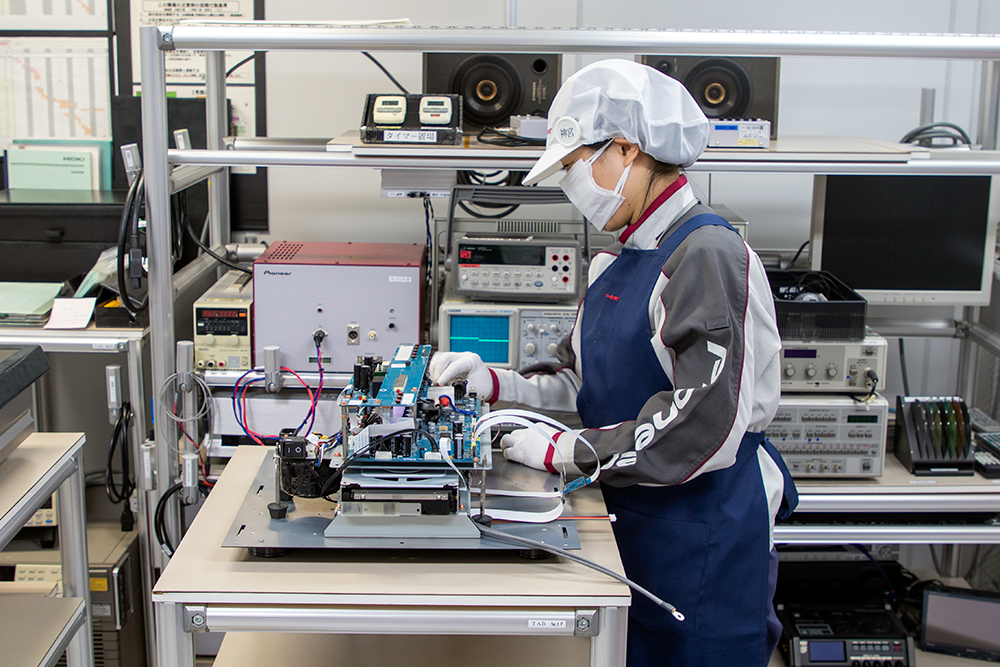 When the numerous tests and inspections revealed that something on the TAD-D1000MK2 did not precisely meet the established tolerances or other requirements, either operationally or aesthetically, the work was corrected until the assembly was flawless. 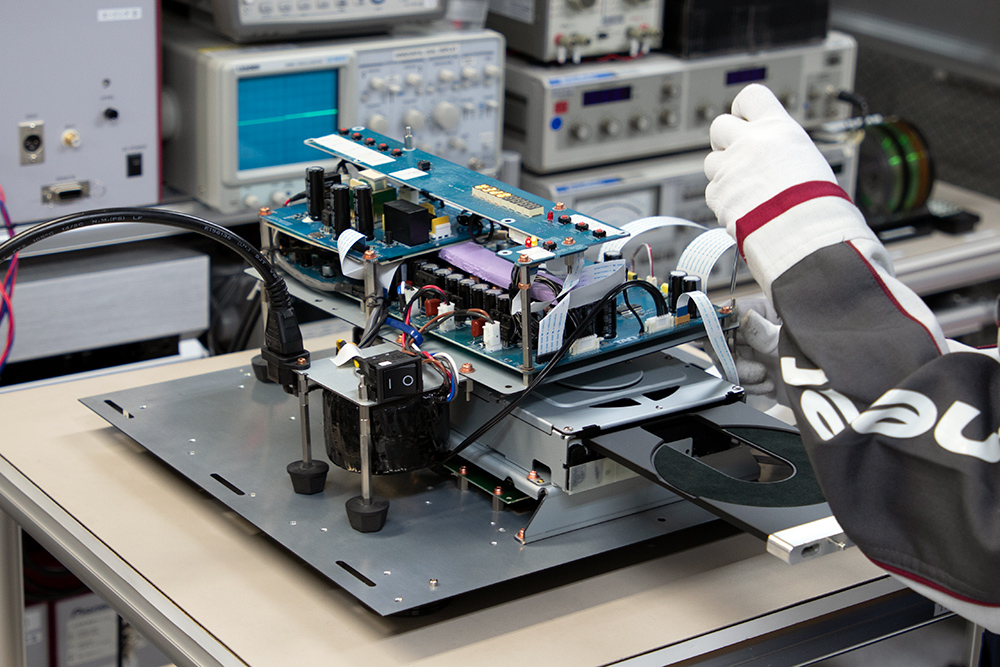 Concluding the factory tour, we returned our clean-room clothes and left. I was now eager to hear the TAD components in action. 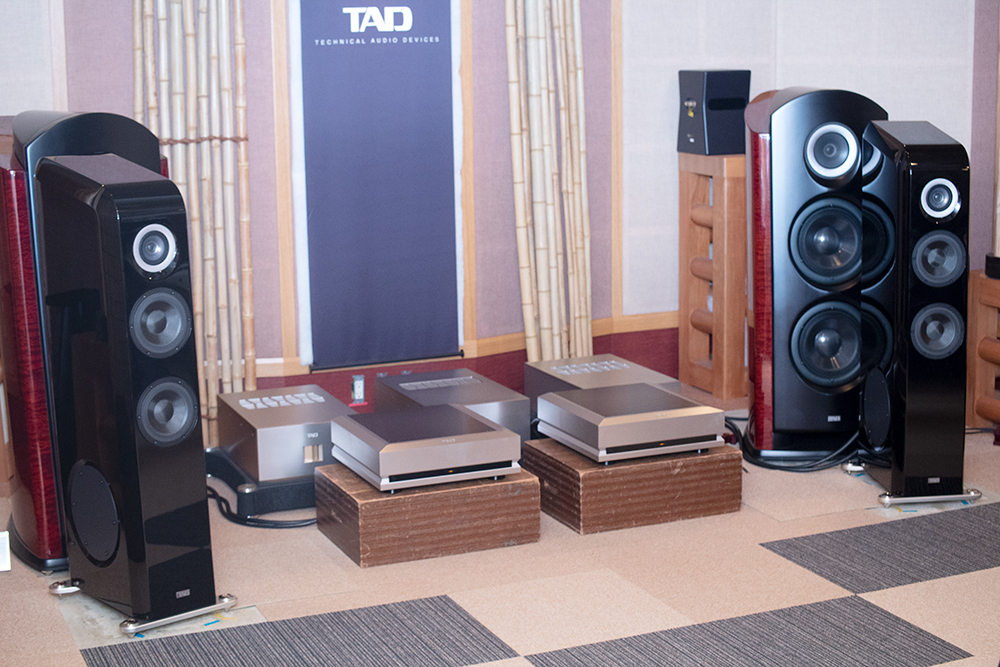 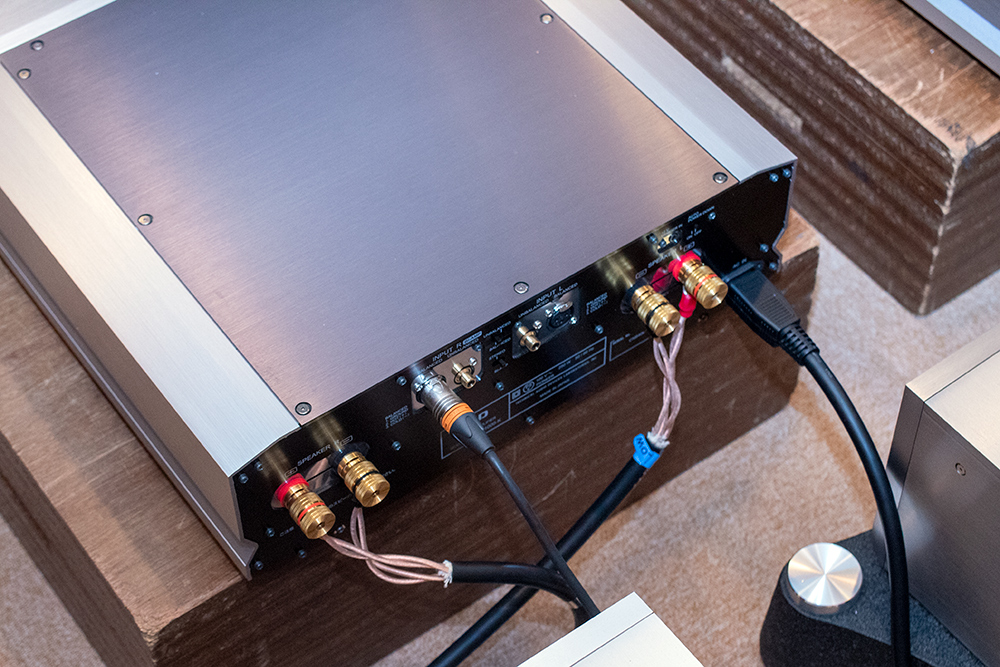 I also took stock of the approximately 16.5'W x 20'L x 7.25'H listening room, with its sound-diffusing acoustic ceiling panels and bayed front wall. Speaking of diffusion, I noticed a pair of interesting treatment devices, each with numerous wooden poles standing maybe five feet tall, called the Sylvan Acoustic Grove System. I discovered that these are made by a Japanese company called Nihon Onkyo Engineering Co. and are mostly sold domestically.

During the demo, an Apple MacBook played downloaded digital files. We started with Evolution components and then moved to the Reference gear, taking note of the sonic changes along the way. We also began with one M1000 amp per channel and later added another to biamp the TAD-E1TX speakers. Honestly, it’s a luxury to visit manufacturers and sit back while the company’s employees swap out heavy components and speakers and tend to the cable connections. Most often, I do the heavy lifting. 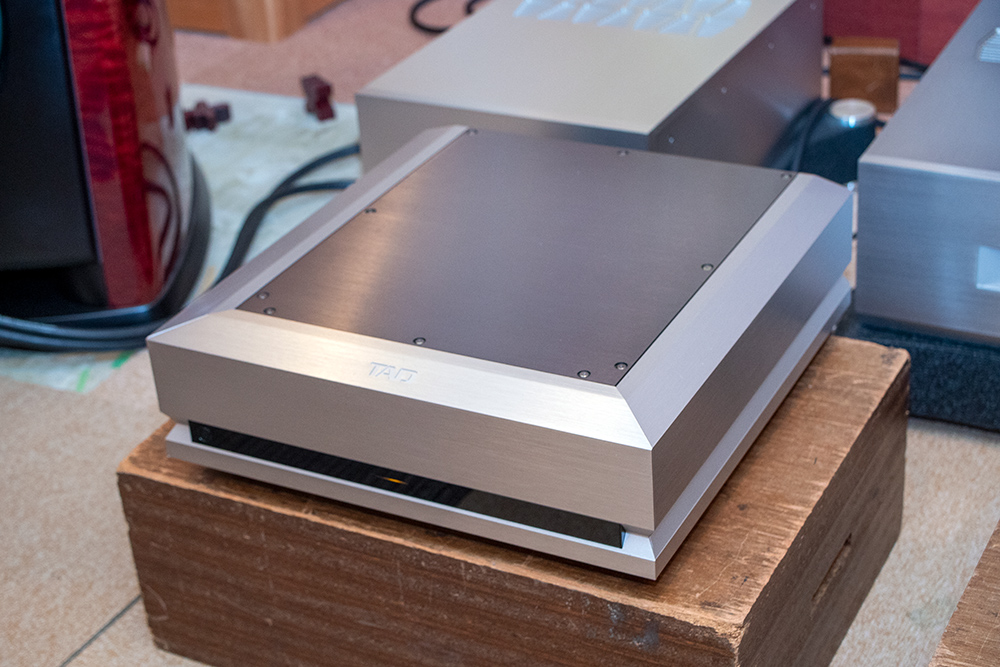 With the Evolution components, the music on Bach Concertos, played by Hilary Hahn and the Los Angeles Chamber Orchestra (Deutsch Grammophon), was organic and inviting, with fantastic transient speed, tremendous immediacy, and precise imaging. Just as one example of the sound, the system dramatically placed the images of Hahn’s violin well in front of the other stringed instruments without coming across as overly etched.

As we switched components and speakers, the sound kept getting better and better until the system was composed of only Reference products. Particularly after the TAD-M700S amplifier was installed into the system, sonic images became much larger, and the sound had more heft. Yet at the same time it was more delicate, with better flow and timing than with the less expensive Evolution components. At that point, the system’s cost was about ¥22,000,000 (a little over $200,000 USD). 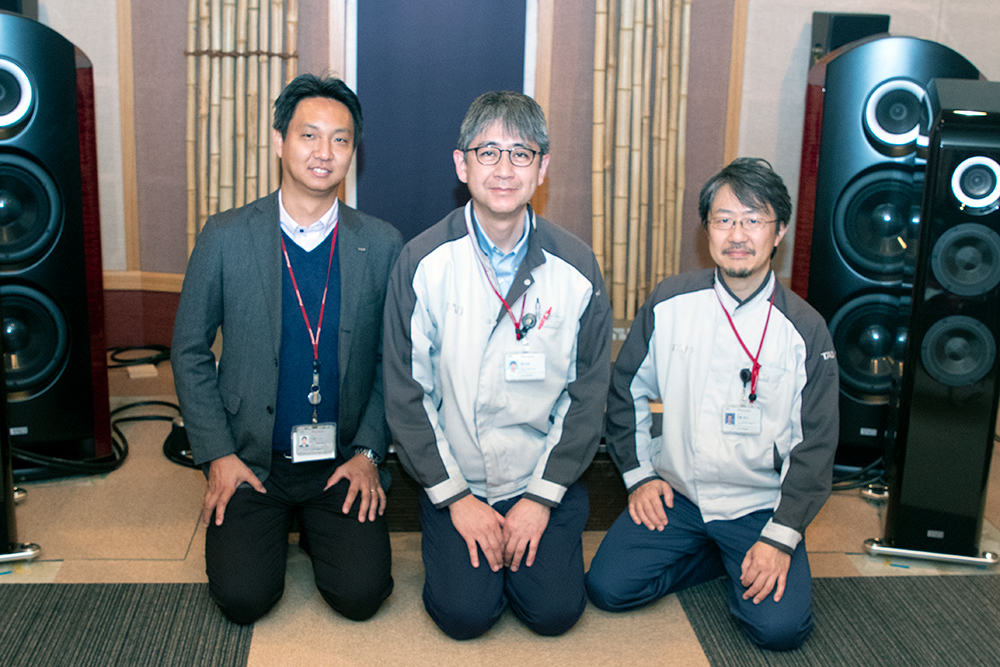 Undoubtedly, the demo’s pinnacle occurred when Michael Jackson’s Thriller (Epic Records) was played at a very high volume, which is more than appropriate for this song. The amount of detail in the song’s opening sounds -- a creaking door or coffin cover, thunder, footsteps on a wooden floor, wind, and howling dogs -- was eye-opening. Soon, cutting guitar riffs emanated from a space pretty much on the room’s left wall, and Vincent Price’s voice was precisely placed a few inches left of center. At the song’s end, Jackson’s “thriller” refrain came out of each speaker in extremely clear and dramatic alternating bursts. The presentation was so impressive that before leaving for home, I bought a Japanese issue of the album at Tower Records, which is still open for business in Japan.

In my experience, each audio manufacturer has a different story to tell. However, it’s only when I visit the headquarters and factories, as well as speak with the people who design and actually make the products, that I learn the full extent of that story. While visiting TAD, I was taken that such a tiny jewel of a company exists, and apparently thrives, under the wing of its parent, Pioneer, a multinational electronics giant. That, of course, is a good thing. TAD undoubtedly benefits from the resources that a company like Pioneer can offer. Conversely, I’m sure that more than a few audio technologies have trickled up from TAD to Pioneer. Stay tuned -- I will report any new chapters in TAD’s rich history as they develop.