Shortly before the beginning of 2018, Soundstage! Network founder Doug Schneider visited Magico founder Alon Wolf at the company’s headquarters and factory in Hayward, California, to hear the then-new Magico A3 loudspeaker ($12,300/pair, all prices USD). On December 17, 2019, almost two years after Doug’s visit, I arrived at Magico to hear the company’s new A5 loudspeaker ($21,800/pr.). 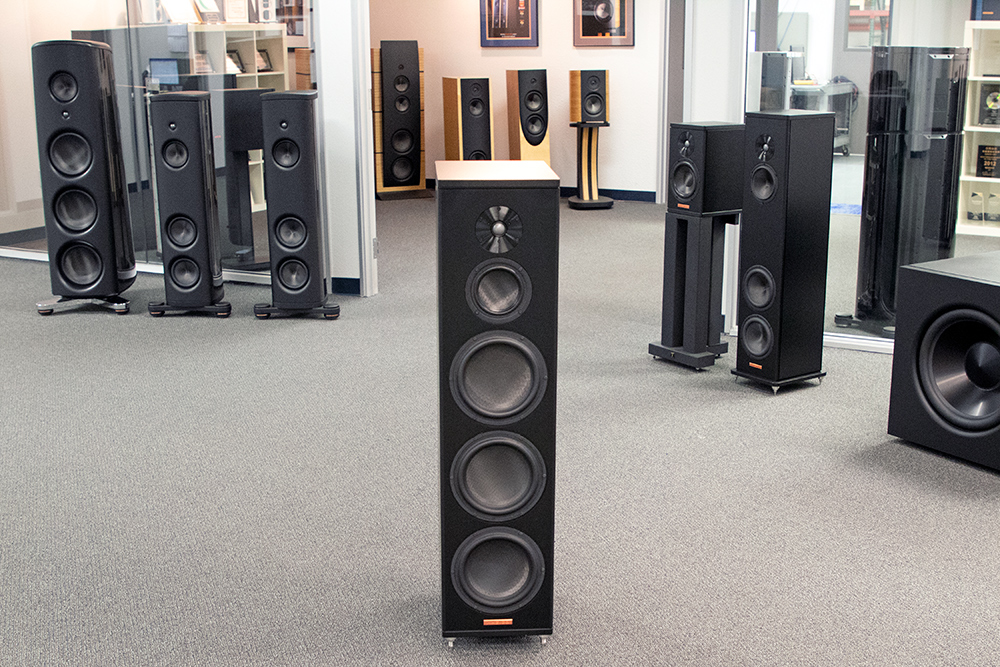 The factory and the new A5

Greeting me at the door was David Shackleton, Magico’s vice president of operations and marketing, who gave me an extensive tour of the company’s 35,000-square-foot factory. Suffice it to say that the factory, with its four aluminum milling machines and lathe, each enormous and very expensive, along with its equally impressive parts storage, assembly, quality control, and shipping areas, is a sight to see. David told me that he would take my recommendation that Magico make a beer mug (with precision-etched Magico logo) out of a solid 6061-T6, aircraft-grade aluminum billet under advisement. 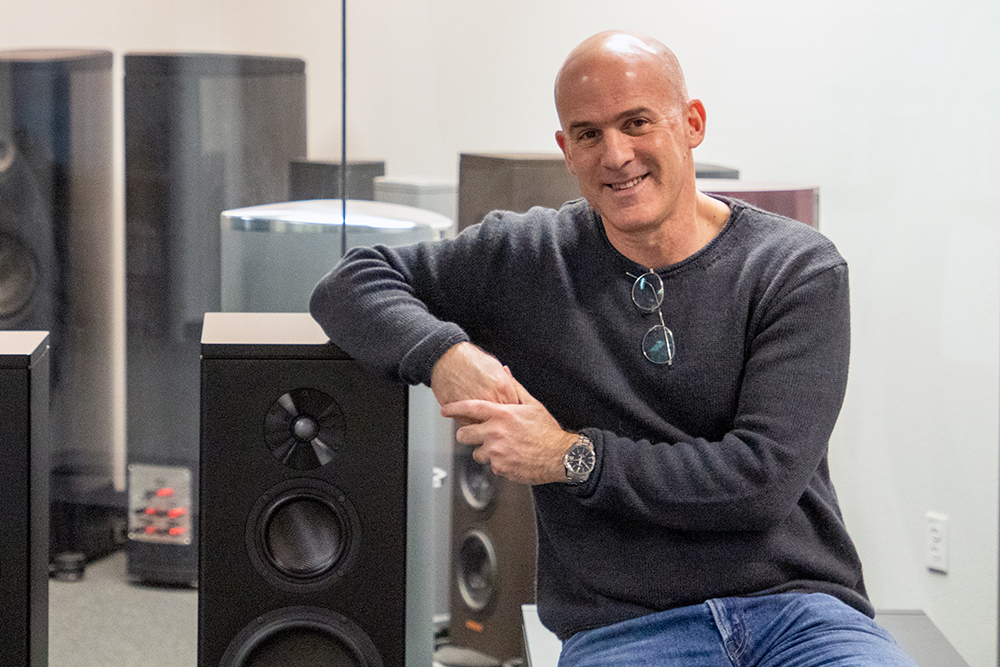 Alon Wolf with the A5

After the factory tour, I met Alon Wolf, at which point I learned that I would be the first non-Magico employee to hear the A5. Moreover, Wolf said he was interested in what I thought of the speaker. Since Wolf is obviously quite knowledgeable about speaker design, my first thought was that I shouldn’t say something that would provoke a (friendly) argument on some aspect of design or performance that I couldn’t win. We then headed to one of Magico’s conference rooms to chat.

In the conference room, I learned from Wolf that the 180-pound A5, which will be available for purchase late in the first quarter of 2020, is a three-way floorstanding speaker that rests at the top of Magico’s entry-level A-series speaker line. It contains a heavily cross-braced cabinet made from 6061 aluminum, a 28mm beryllium-dome tweeter, a 5" midrange driver, three 9" woofers, and a proprietary Elliptical Symmetry Crossover to tie those five drivers together.

The A5 contains a number of new technologies and components. Its midrange driver, which has a foam surround, is the only one in Magico’s line to have one. Wolf was also especially proud of the A5’s new midrange driver and woofer cones -- a sandwich of two graphene-coated carbon-fiber layers surrounding an aluminum-honeycomb core -- which he deemed the speaker’s “biggest thing.” 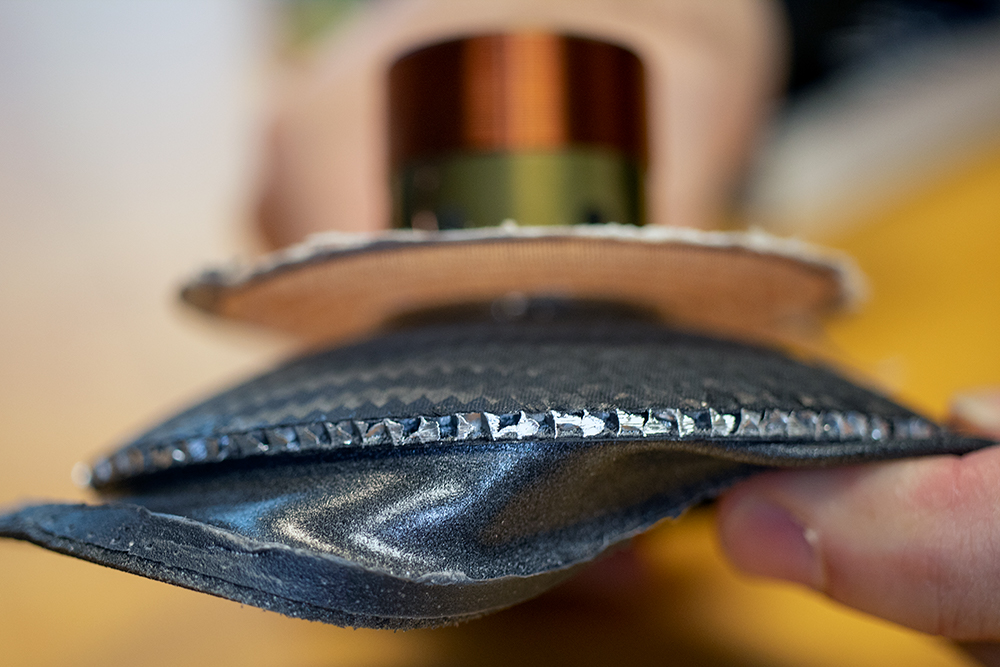 Side view of a cone’s aluminum-honeycomb core

Wolf told me that the new driver cones have an unprecedented stiffness-to-weight ratio. This, he stated, allows the cones’ movement to be pistonic within their passbands, meaning that the cones are so rigid that they don’t “break up” or bend, but move only as dictated by the signal. The former would negatively impact the speaker’s linearity and create distortion, including sounds that reside outside of each driver’s intended frequency range.

Aluminum-honeycomb sheeting isn’t new. Weighing in at a fraction of what solid aluminum weighs but, according to Wolf, almost as strong, aluminum-honeycomb sheeting is used on things such as aircraft wings, which need to be light yet highly rigid. This sheeting, Wolf stated, is extremely difficult to work with and requires a 20,000-pound press to create the shape of a large woofer cone.

During our discussion, Wolf brought out an oversized aluminum-honeycomb sheet into the conference room for me to inspect. Despite its size, the sheet was incredibly light and extremely rigid. At Wolf’s insistence, I tried to flex the sheet in more than one direction, but I was unable to no matter how hard I tried. The only stiffer cone material, Wolf stated, is diamond, which he asserted is too heavy for optimal driver performance. Wolf also said that the A5’s new cone construction is a “game changer” that will be destructive to the marketplace’s price structure.

After chatting in the conference room for several hours, we entered Magico’s impressive 21'W x 33'D x 13'H listening room. The room’s 14"-thick walls are comprised of five layers of sound-dampening QuietRock gypsum panel with a resilient, internally suspended interior channel that flexes to act as a low-frequency absorber. Wolf stated that “the room is essentially a building within a building.”

The playback system contained many components. In this case, we used a pair of CH Precision’s M1 mono amplifiers and an L1 preamplifier, an MSB Technology Reference DAC, and one of Baetis Audio’s Reference music servers. Cables, power cords, and power conditioner were by Synergistic Research. 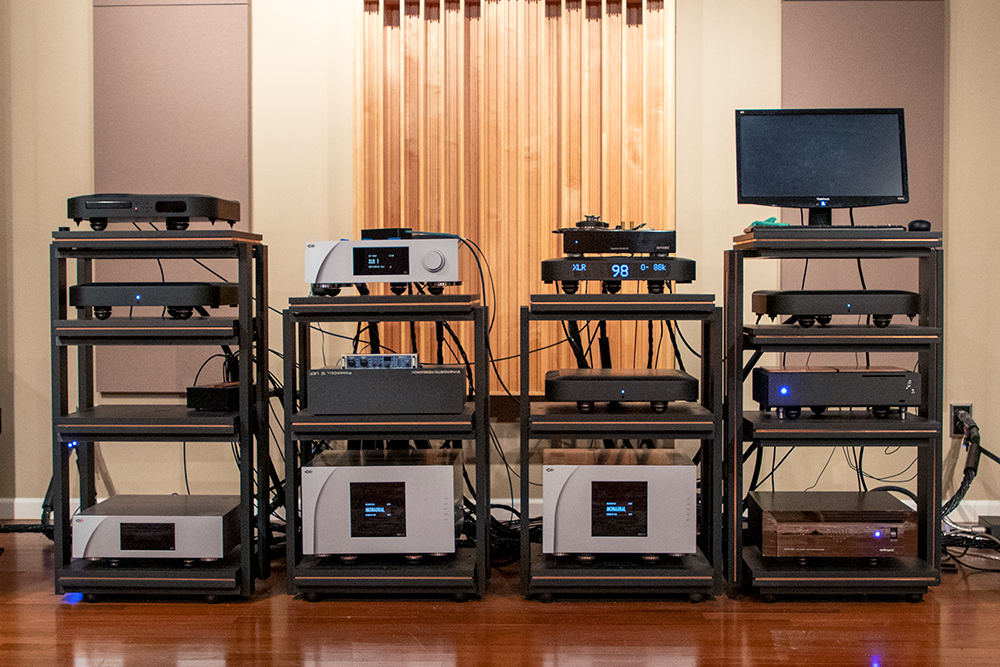 I’m not ready to say that the A5 produced the best sound that I’ve ever heard at any price, but at a tad under $22k/pair, I was astonished at what it did, which was producing music at both low and high volumes with extreme accuracy. In fact, I would say that based on my observations, increased perceived accuracy and decreased perceived distortion over other Magico A-series speakers are the A5’s sonic hallmarks. The fruits of these abilities are apparent in almost every aspect of the A5’s performance, but they’re particularly noticeable with respect to its linearity, resolution, transient cleanliness, and timbral correctness.

For example, take one colorfully named track that Wolf played, “The Saga of Harrison Crabfeathers,” from Brian Bromberg’s Wood album (Seven Seas Records). The bottom strings of Bromberg’s double-bass leads were powerful and impactful, with lingering reverberations that seemed to fully dissolve only when hand-damped. Top strings, even when played fortissimo, were clear and precise. Had I not been told the A5’s price, I would have guessed that it cost much more than it does. 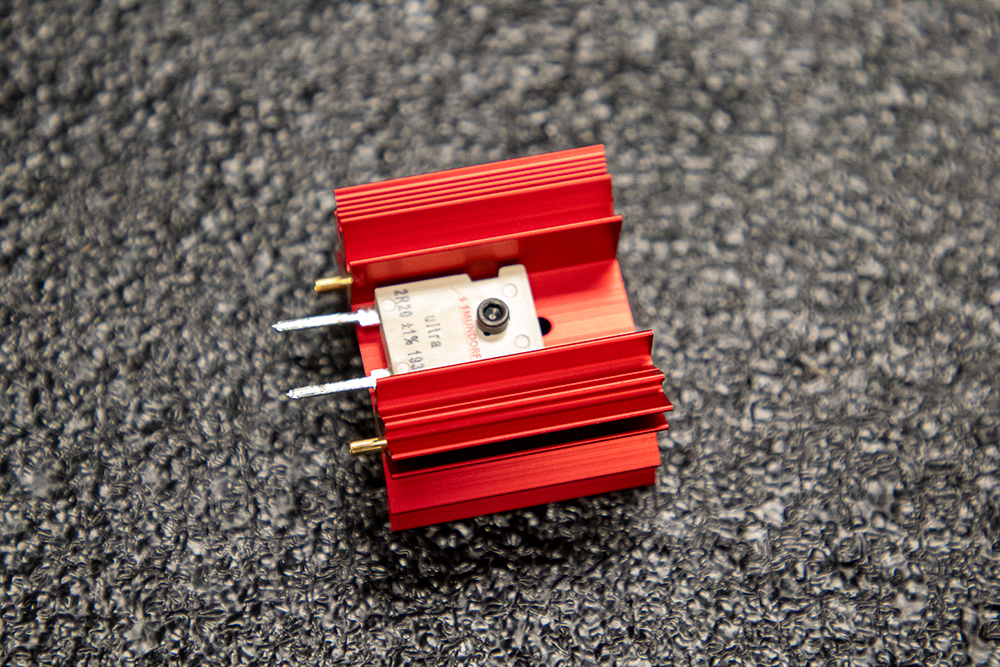 A Mundorf M-Resist Ultra resistor, which is used in the A5 crossover

The same was true with “Journey to the Line,” from Hans Zimmer’s The Thin Red Line movie soundtrack (RCA Victor). Unlike in “Crabfeathers,” there is no bass solo or lead. Rather, the lower string section mostly plays together with the violins and violas. Listening to this track with the A5s reminded me of when components are placed on a good vibration-control rack. At first, the sound seems comparatively thin, but after a brief acclimation period, you realize that what you’ve been listening to was bloated and unnatural. With the A5s, instruments in the lower midrange and bass were now apparently free of overhang, thus allowing me to hear instruments way in the back of the orchestra with an overall increase in the amount of audible signal information.

Speaking of obscured information, on Paul Simon’s “Homeless,” from his Graceland album (Sony Legacy), the A5s beautifully reproduced the vocals, and I was able to clearly hear the vibrations and changing intonations of the Zulu a cappella singers’ voices and the haunting room echos. The resolution of microdetail and the integration of the harmonic and dynamic envelopes on these vocals was impressive. 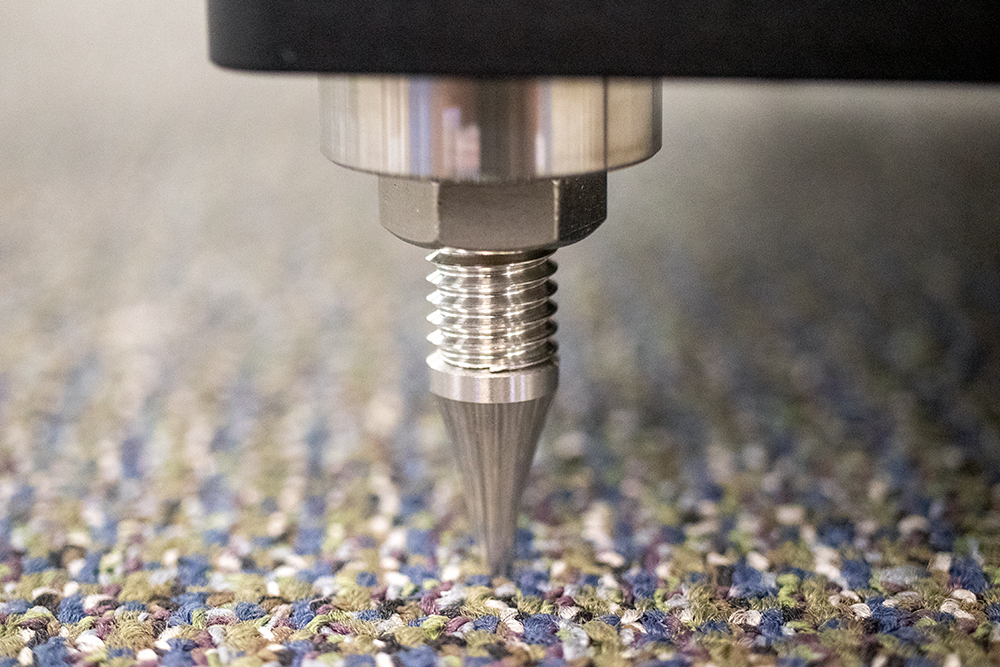 An A5 floor spike

Finally, one track where the A5s did flat-out produce some of the best sound that I’ve ever heard despite the pair’s non-flagship price was “Pathway,” from Marilyn Mazur and Jan Garbarek’s Elixir (ECM). Mazur’s bells, gongs, cymbals, and assorted “metal utensils” were presented on what seemed like a completely black background with startling cleanliness. The percussive timbre of these instruments sounded so right. Take the gong, for example. Its extremely precise pitch was spot on, and its sound was exceptionally clear, dark, full, and round. Wolf actually played this track first, which I suspect was a result of him knowing just how shockingly good it sounds on the A5s.

As with the other tracks that Wolf played through the A5s, the speakers’ performance with “Pathway” was aided by an excellent system in an uncommonly good room. At this point, I would love to hear what the A5 can do with my components in my room, for which I have obvious reference points. Still, the fact that the A5s performed the way they did was striking no matter how good the associated components or the room. 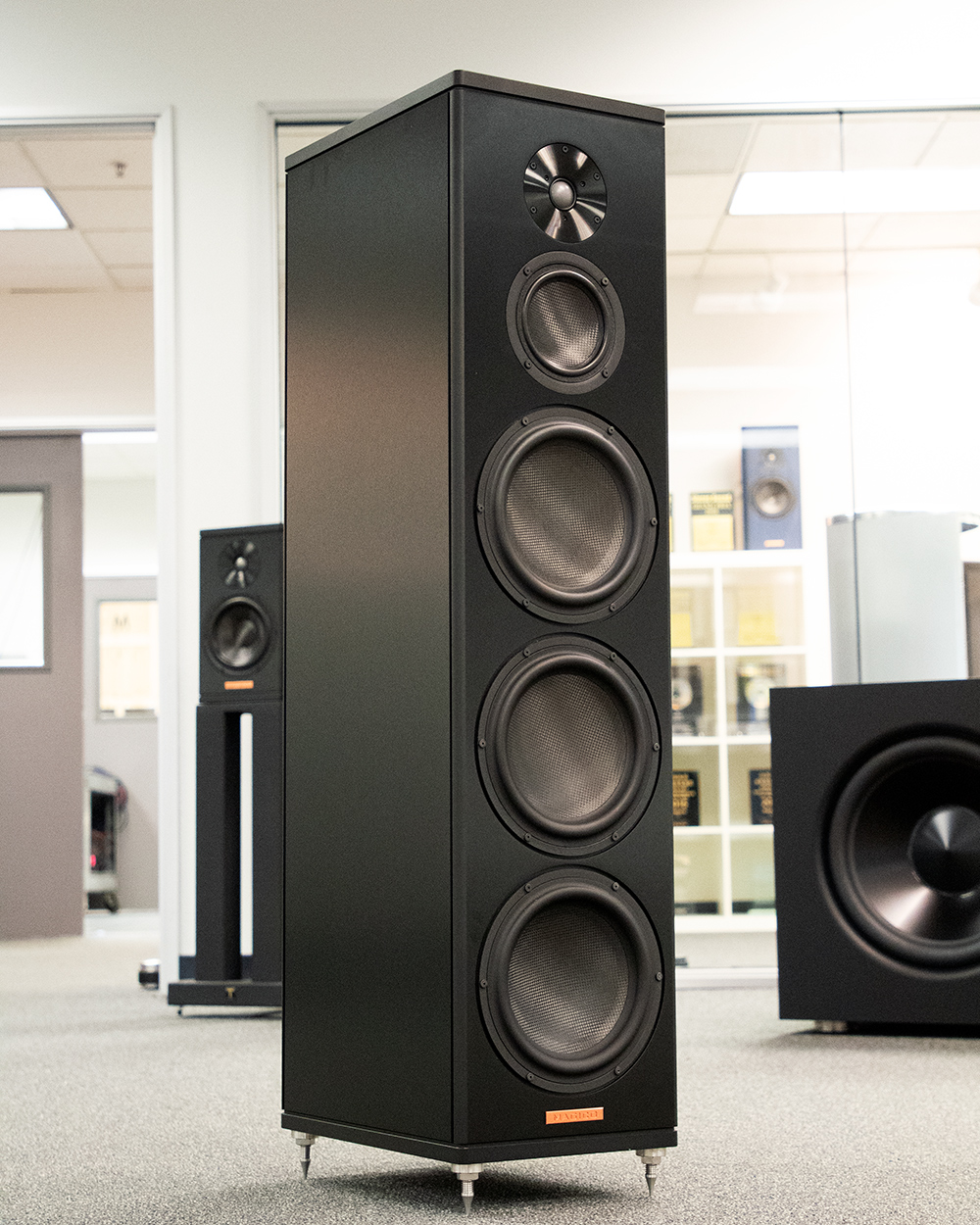 The audiophile speaker landscape is littered with so-called game-changing technologies. At least initially, the sales pitches for these technologies appear believable, especially to folks who don’t have a technical background. Also, the speakers’ demos can often sound pretty good. But most often, sometimes within days and sometimes even within hours of the demo, the exuberance fades. That hasn’t happened with the A5. From what I heard, Alon Wolf appears to be right about his company’s new A5 -- the speaker seems poised to outperform many significantly more expensive competitors in a number of areas. That statement may appear trite, but I caution that if you’re looking for a new pair of speakers, you would be ignoring it at your own risk.