Tony West of Adirondack Audio and Video joined me on my latest audio excursion, this time to visit Devialet’s flagship store in New York City’s SoHo neighborhood. Our goal was to audition the company’s main product lines -- the Phantom Reactor and Phantom Premier series of wireless speakers, as well as the Expert Pro all-in-one amplifiers. Now one of four Devialet stores in the city, the flagship is only steps from the company’s New York office space, but a long distance from its headquarters, located in Paris, France.

Devialet’s stores look like highly Apple-ized versions of an Apple store. Mostly white and intensely sparse, clean, and modern, the stores contain a few bold shades of red and blue that are strategically placed for dramatic effect. The SoHo store fits right in with the area’s many trendy retail boutiques. 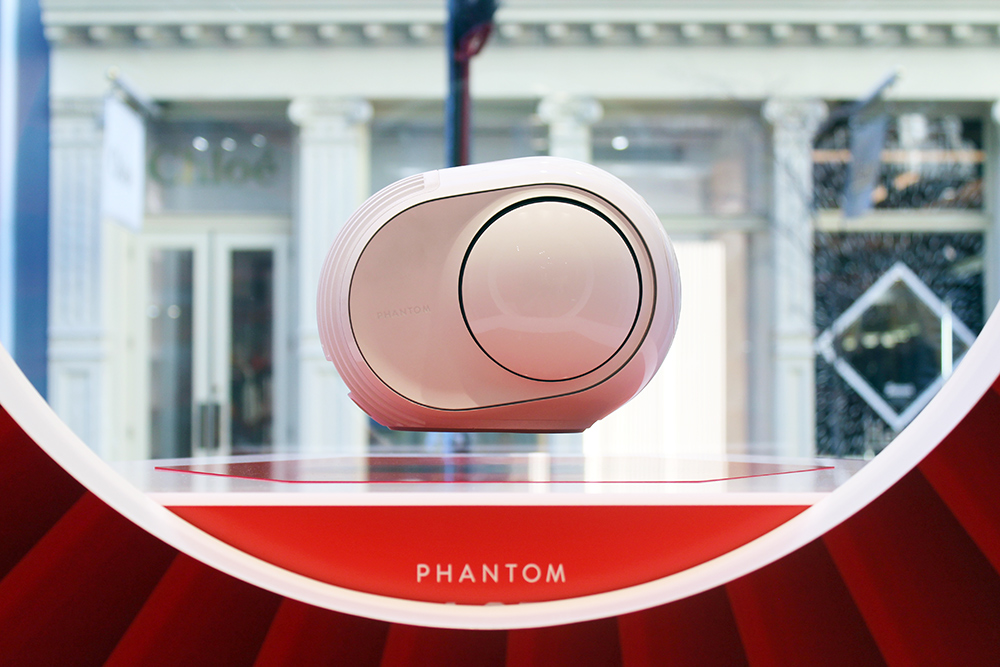 I arrived at my destination to find that the store’s front window contained several Phantom Reactor and Phantom Premier speakers, including one that was suspended in mid-air (magnets, my friend). The Reactors range in price from $999 to $1299 each (all prices in US dollars). The larger and more expensive Premiers go for $1690 to $3490 each. Once in the store, we passed an array of these speaker lines on static display and headed to the store’s rear, where we met Joshua Klein, Devialet’s director of US marketing, and Alexandre Panizzoli, the custom sales manager. 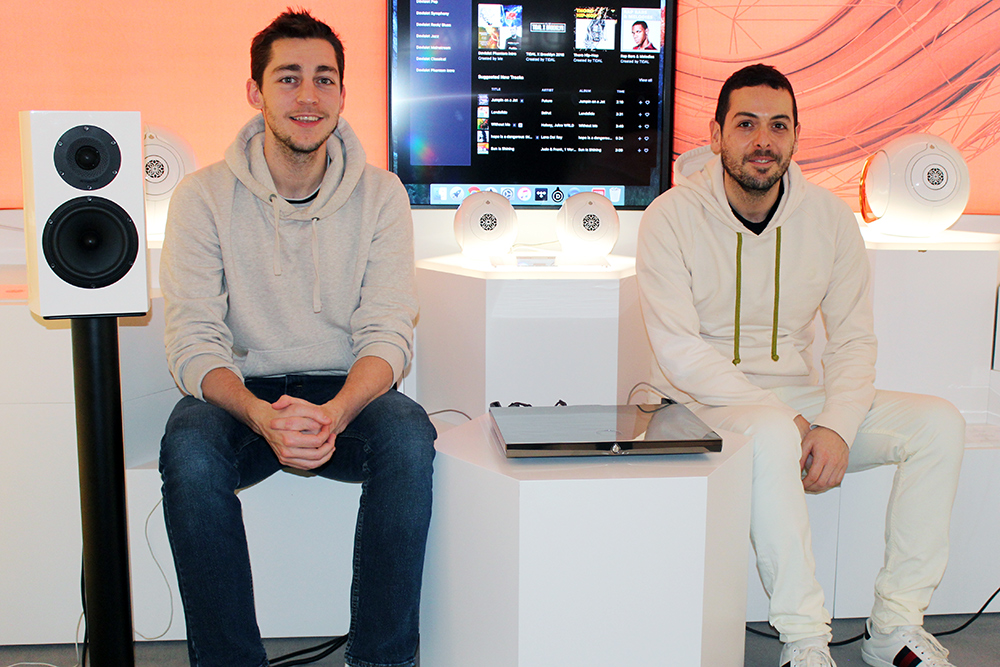 As we sat and talked, Klein enthusiastically discussed Devialet’s mission to bring great sound to not only experienced audiophiles but also young people who may not have experienced high-performing audio gear. Devialet’s hope is that while the latter folks may start with an entry-level Phantom Reactor speaker, they may trade up to a Premier speaker or, in some instances, an Expert Pro and some standalone speakers.

Calmel also developed several other technologies, including Speaker Active Matching (SAM), which allows the Expert Pros to optimize performance by matching their output to a variety of speaker models from other manufacturers. The availability of this feature assumes that the speaker has been measured by Devialet and placed in its data bank, which currently contains measurements for more than 800 speakers. 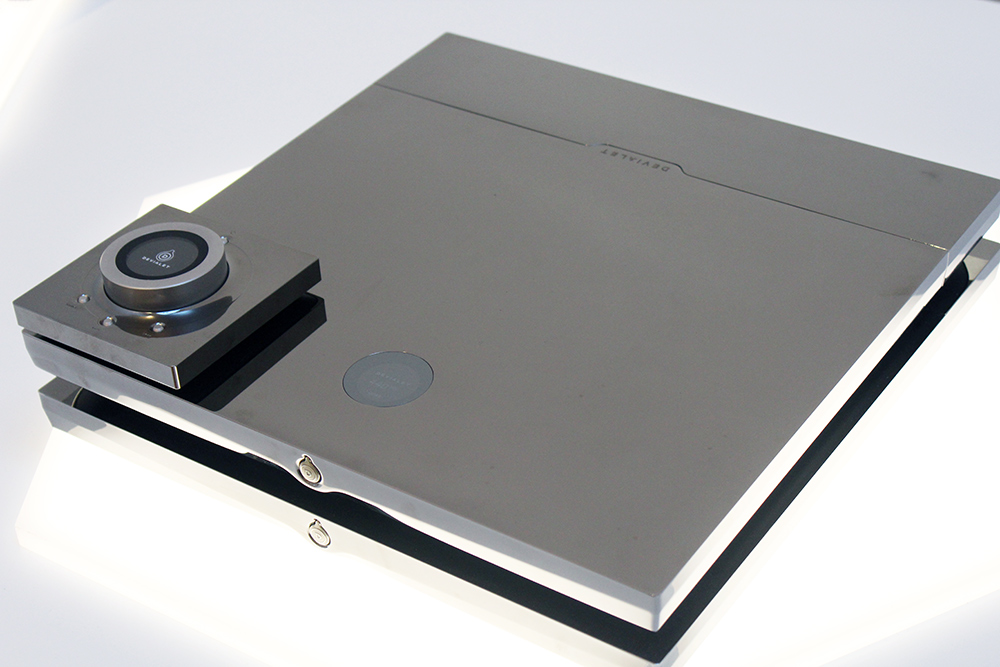 The Expert Pro amplifiers, which range in price from $6490 to $34,990, have built-in preamps, amps, digital-to-analog converters, streamers, and phono stages. Just add speakers. They support too many high-tech features to discuss here. But as just one example, through a link on Devialet’s website, the user can make setting adjustments for not only the speaker being used but also the unit’s inputs, outputs, and phono stage. As to the latter, you can select a moving-magnet vs. moving-coil cartridge, as well as the cartridge brand and model and even the recording’s equalization curve.

With their impossibly slim, highly polished chrome casework, the Expert Pros are also studies in modern industrial design. So are their similarly finished remote controls, which are square and feature large, round volume knobs. 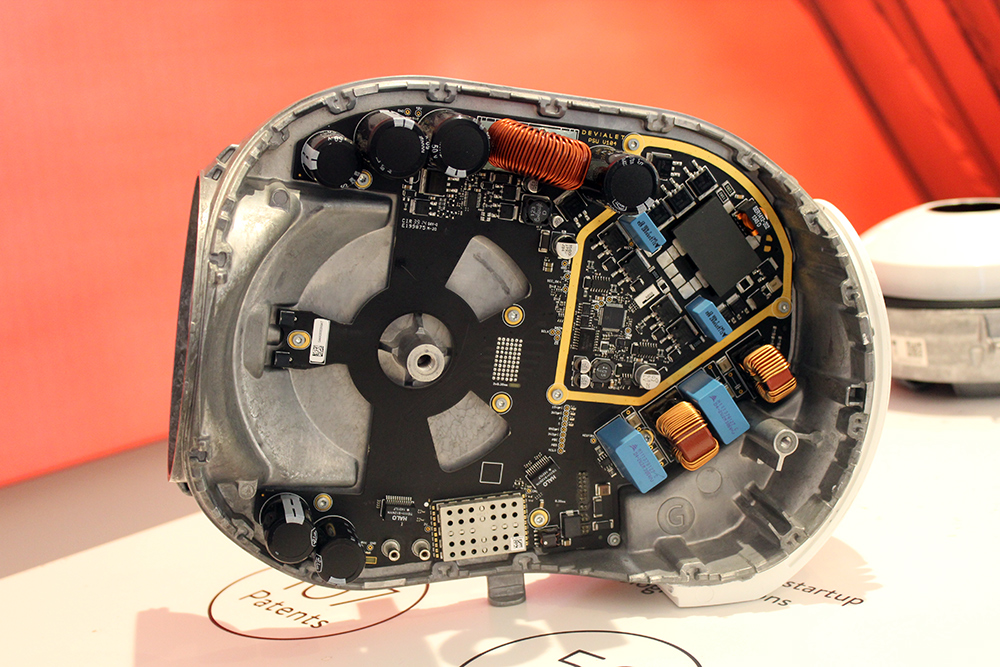 Sporting semispherical designs, the small Phantom Reactor and Phantom Premier speakers have to be seen to be appreciated. The best that I can say is that they look like they have arrived here from the future via some yet-undiscovered power source. Don’t mess with them! Under their white and metallic trim “hoods,” they are packed with technology that has trickled down from the Expert Pros, such as powerful internal amplifiers. For example, the Gold Phantom’s amp ($2990) delivers a blistering 4500W of peak power.

We first spent some time in the store’s upstairs listening room, which contained an Expert 140 Pro ($6490) and samples of all of the Phantom Reactor and Phantom Premier models. I will temporarily hold my comments about the 140, as the real test of the Expert Pros would soon occur in the downstairs listening room. 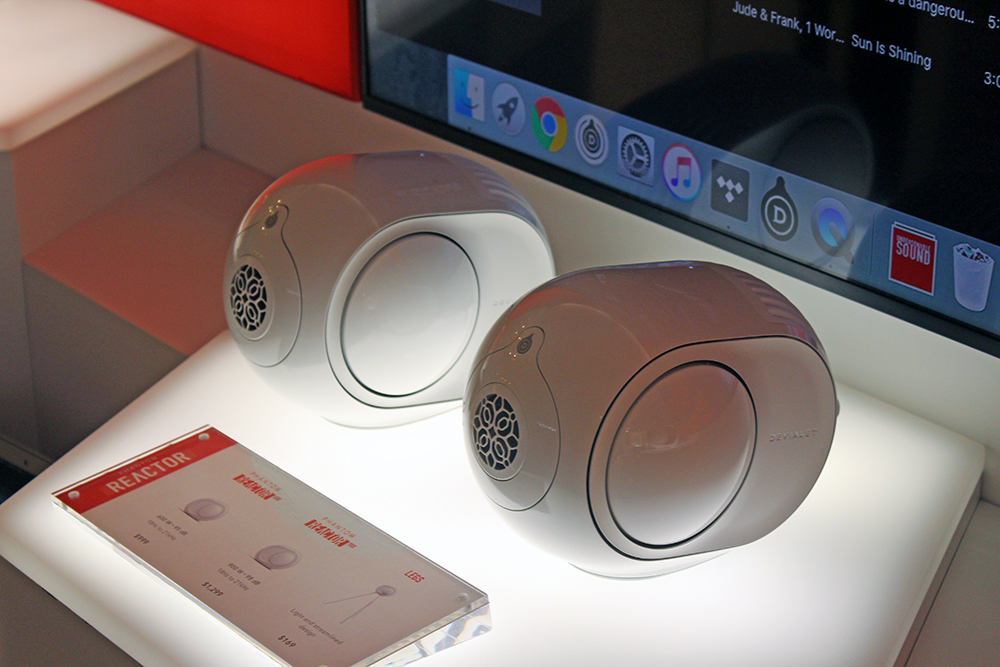 Surprisingly, one Phantom Reactor 600 (600W of peak power, $999), streaming wirelessly Tidal and HDtracks, easily filled the small room with clean sound. When the sound was turned up, the two side-mounted woofers violently pulsated, yet the sound was composed and the bass was deep and plentiful. I sat there thinking that the speaker’s internal pressure must be such that if it exploded, we would be ingested by a supermassive black hole. Of course, with only one speaker, there was no stereo imaging. No problem, Panizzoli stated while adding a second Reactor. In fact, you can add as many Phantoms to a system as you want. One Devialet customer purchased 20 of them for his audio system!

We then proceeded to the downstairs listening room, which contained a selection of Expert Pro amps, a VPI Industries Avenger turntable that was temporarily out of commission, and a pair of (yes, white) Vivid Audio Giya G3 speakers. I immediately felt sorry for Klein and Panizzoli. The room’s approximately 50' ceiling and huge glass skylight caused it to be an acoustical nightmare -- reflections everywhere. 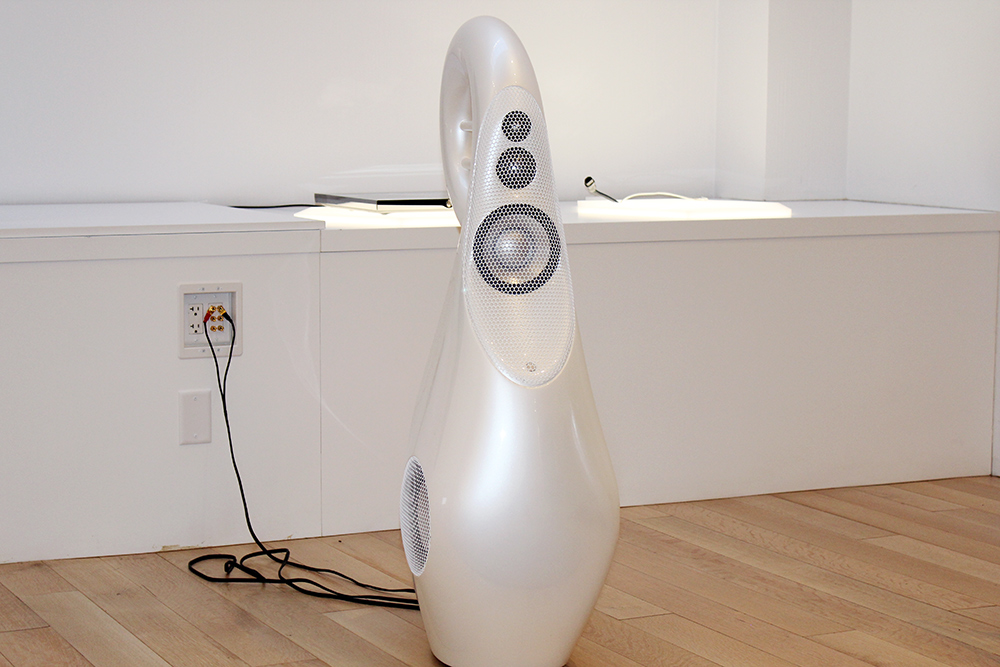 We listened to the Expert 1000 Pro Dual system, which consists of two Expert 250 Pros, each rated at a mind-numbing 1000W of peak power (together $34,990), configured to create an ultra-high-end electronics setup. The source was a laptop playing downloaded digital files. Based on the system’s specifications, I would expect it to be able to drive any -- and I mean any -- home speaker.

Despite the room’s acoustic challenges, the demonstration was an eye-opener. The first three words of my notes read “SUPER LOW DISTORTION.” And that was with the many clarity-reducing sound reflections. My notes also stated “crisp,” “clear,” “clean,” “large,” “dynamic,” and “bass impact!” When I took command of the system’s remote control, I drastically turned up the volume. Even in the cavernous room, the system didn’t flinch, providing unrestrained, artifact-free sound. Looking at the remote, I noticed a button that allowed me to defeat the SAM processing. Doing so did not make me happy -- imaging and presence deteriorated, the soundstage shrank, and tonal colors suffered. 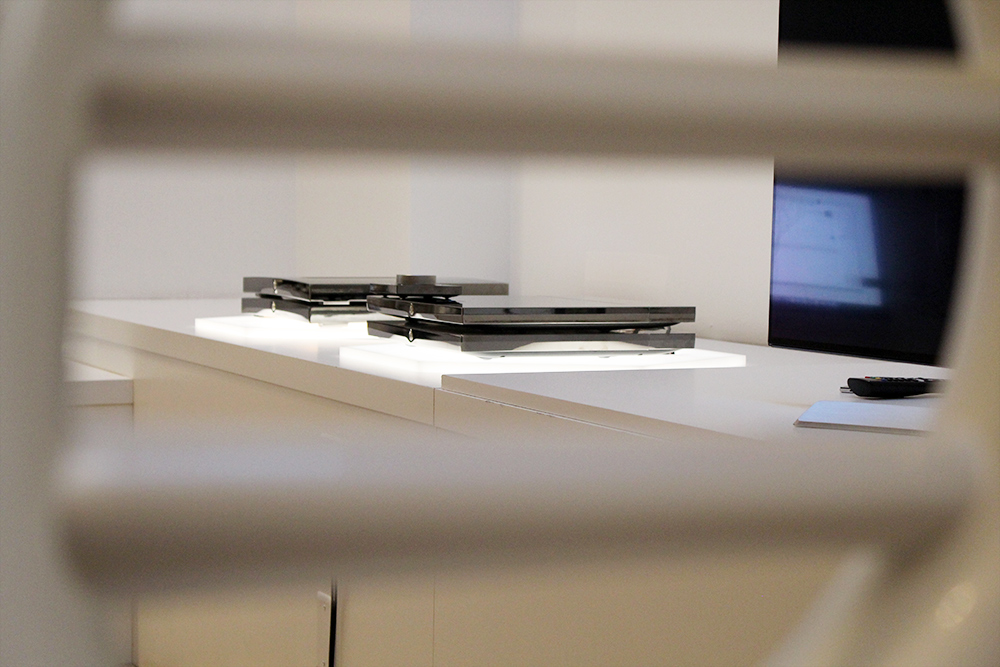 Devialet’s ultra-clean and transparent house sound might not appeal to die-hard tube junkies who sometimes favor the fuzzy warmth that a little distortion can provide. Still, the demonstrations that we attended were massively impressive examples of what can be achieved with advanced solid-state circuitry. I encourage everyone to visit a Devialet store to experience digital’s cutting edge -- Tony West and I enjoyed our experience there immensely.