A Day at DeVore Fidelity

I recently wrote about a listening party that I attended at DeVore Fidelity’s “Monkeyhaus” factory and listening room, located in New York’s Brooklyn Navy Yard, for two independent, audiophile-approved jazz record labels: Newvelle Records and Greenleaf Music. When I headed back to that haus for a more in-depth investigation of DeVore and its self-described “top banana,” John DeVore, I was determined to uncover any monkey business that had gone undetected during the first go-round. 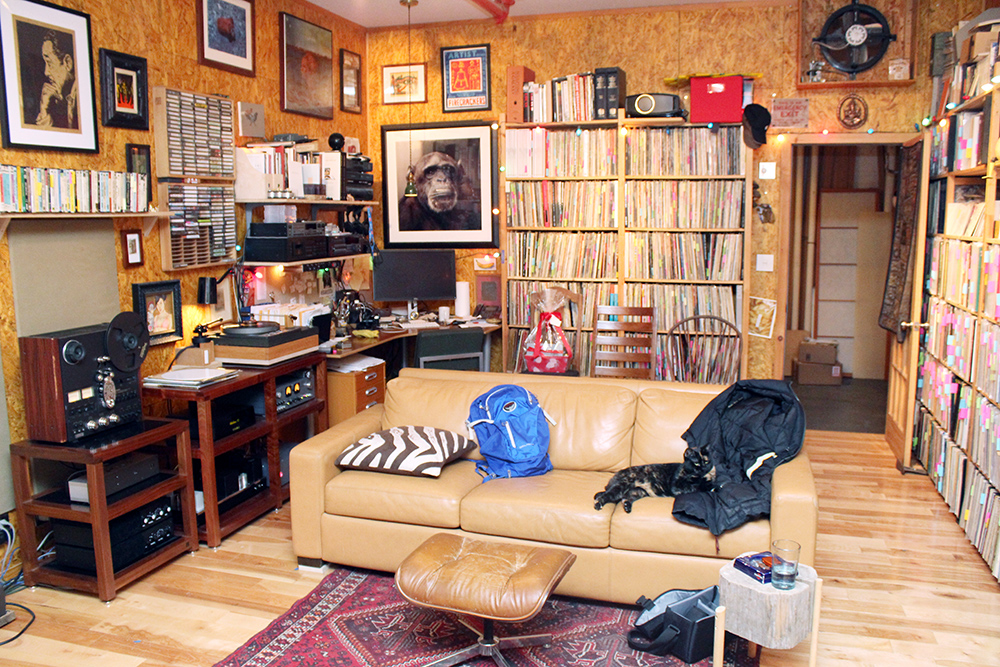 Once at the Monkeyhaus, I was told that John was in the listening room, a den-like oasis of soft lights, wood finishes, and upscale Persian rugs amongst the factory floor. When the room isn’t being used to host parties, John uses it as an office and to measure and test his speakers. The room is also a repository for all things monkey (and ape) due to the influence of John’s uncle, Irven DeVore, a noted primatologist and anthropologist. That influence informs the names of both the Monkeyhaus and John’s Orangutan and Gibbon speakers.

In fact, for every pair of DeVore’s Orangutan/96 speakers that are sold, John and his dealers will sponsor an orphaned orangutan that is cared for by Orangutan Foundation International (OFI), a charity that rehabilitates these creatures and conserves their Indonesian Borneo rainforest habitats, where John has visited. John and his dealers have donated thousands of dollars to OFI as part of this sponsorship. A bonus to the speaker purchasers is that they receive information, photos, and updates concerning the sponsored orang. 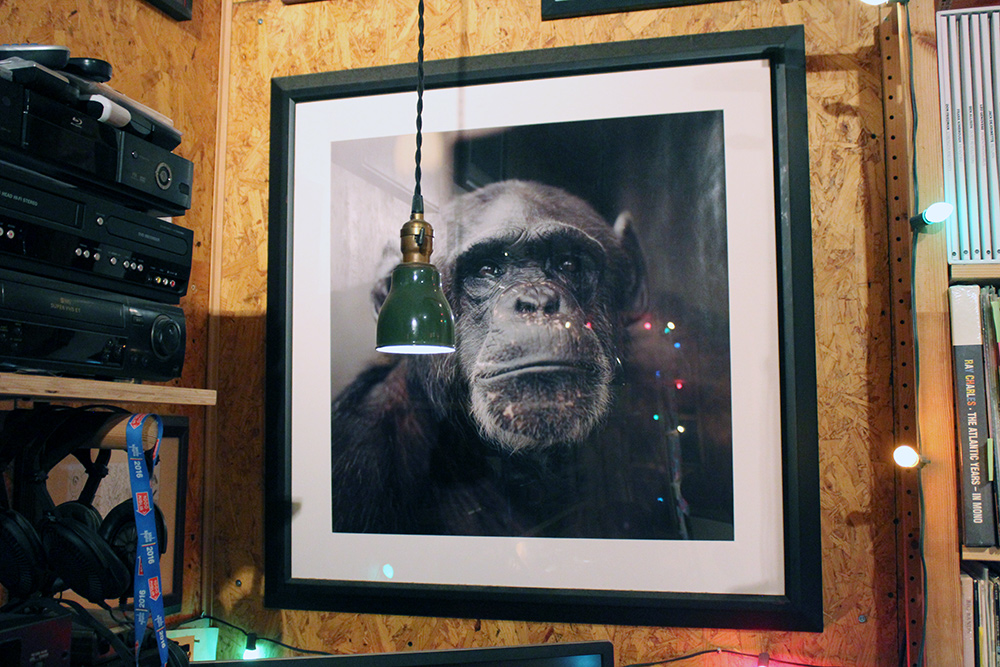 When I reached the listening room, I discovered that John was not yet there. While waiting for him, I photographed the room’s audio gear and simian-themed paraphernalia, which included books, paintings, photographs, and the occasional stuffed critter doll. Enter the previously undetected monkey business -- now in the room was a prototype pair of DeVore’s forthcoming Orangutan O/Reference statement speakers, whose estimated retail price is to be between $80,000 to $90,000 per pair. Bearing gorgeous exterior wood finishes, driver housings, and port tubes each machined of glimmering bronze, the two-towers-per-stereo-channel speaker represents DeVore’s most ambitious product to date. But I have gotten ahead of myself. 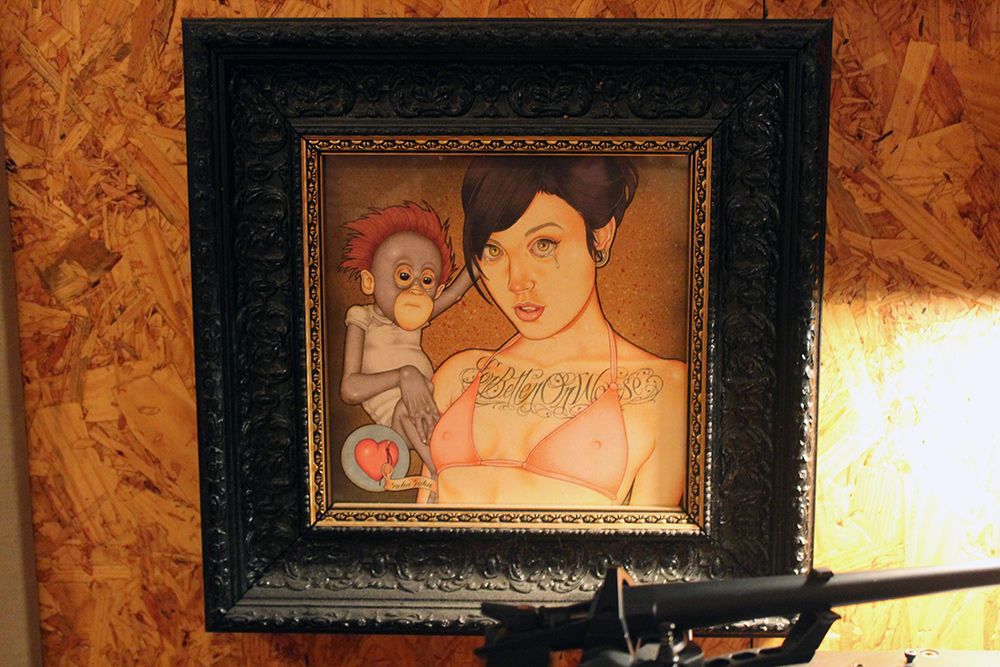 The listening room also contained numerous venerated audio components, including some vintage prototypes, which John uses to ensure that his speakers perform well in a wide variety of audio systems. There were single-ended amps such as Komuro Audio Labs’ prototype 20Wpc model 845, Pass Labs’ 30Wpc Aleph 3 (aka the “hedgehog”), Audio Note’s 8Wpc P3 Silver Signature, and a prototype 2W model 45 from Don Gaber’s Fi, the latter two being of the “flea watt” category. There were also push-pull stereo amps, including a 25Wpc Music Reference RM-10 and a 110Wpc Audio Research VT130SE. For those interested in something even more powerful, there was a Parasound 250Wpc A 21 stereo amp. 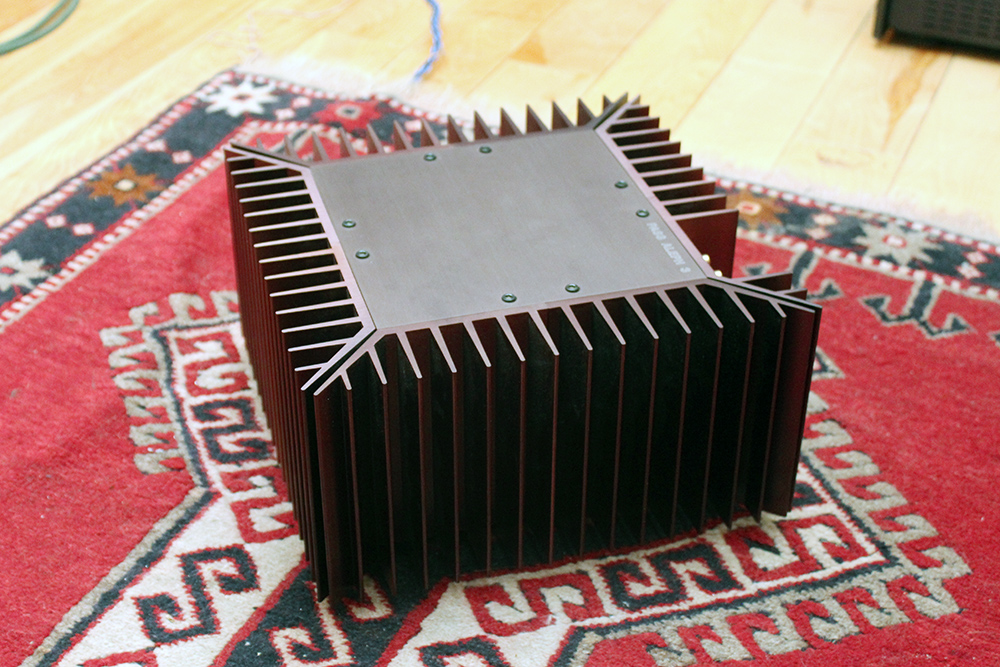 As far as sources go, the room contained a Technics RS-1500 tape deck, a modified Garrard 401 turntable, and a digital music server. In between all of those amps and sources was an EMT JPA 66 preamp with integrated phono stage, which John, who had by then arrived, deemed the “greatest phono stage in the world.” 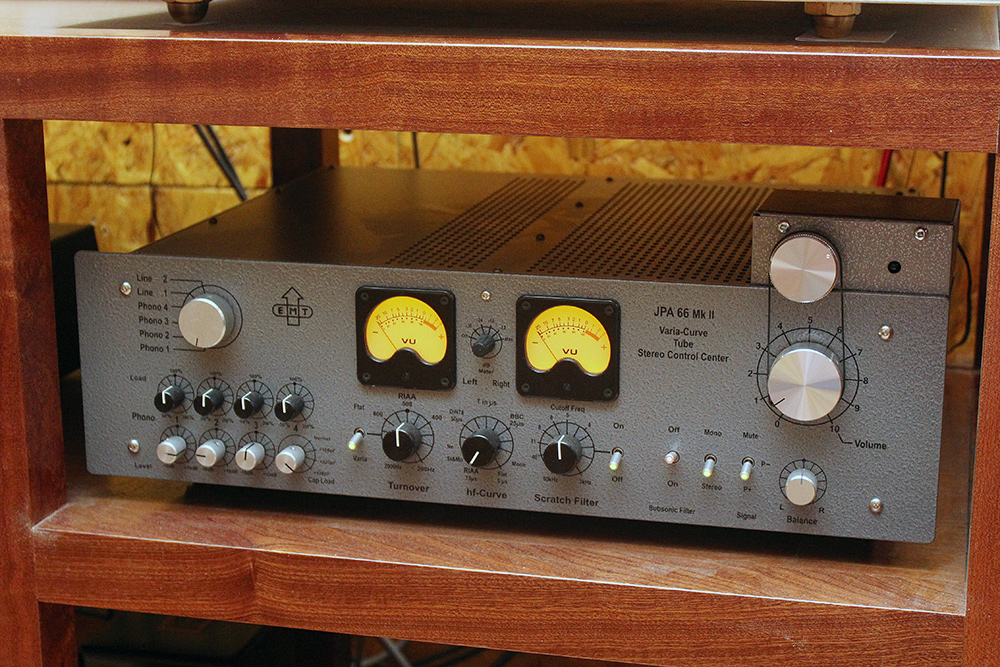 It was at that point that John and I moved from the listening room to the factory floor. There, piled to the ceiling, were boxes of drivers manufactured pursuant to John’s specifications by Norway’s SEAS. Made in-house by DeVore are its speaker crossovers, numerous examples of which were being run-in during my visit. John is extremely proud of his crossovers, and he robustly builds each one so that its components will not physically shift during shipping or over time, thus skewing the speaker’s frequency response. 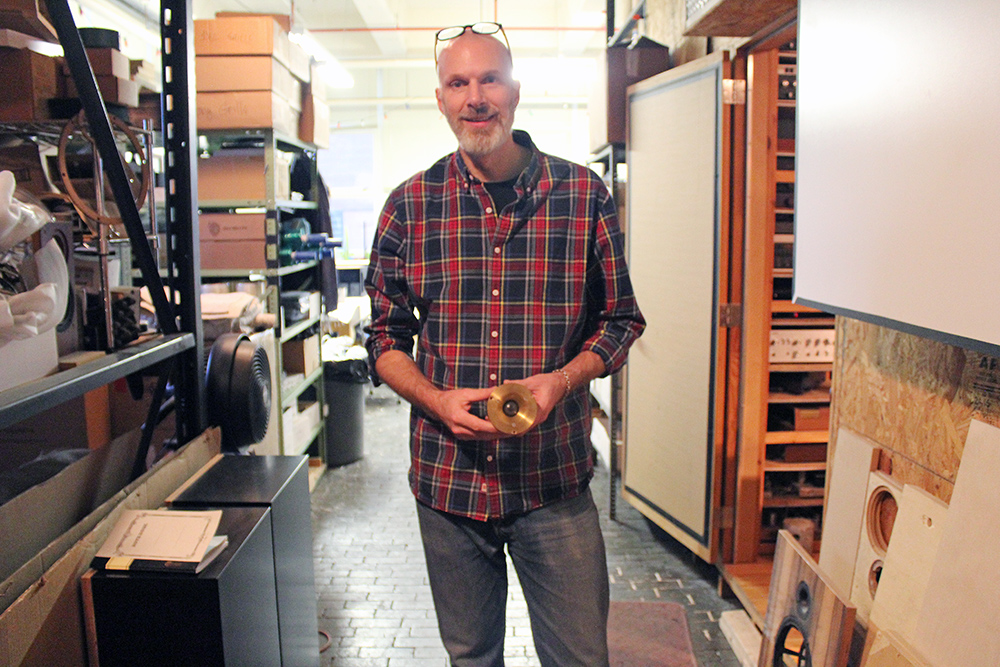 Also on the factory floor were many pre-assembled wood speaker cabinets and stands. The epitome of locally sourced products, these were manufactured by the Box Furniture Co., located just a few steps down the hall from the Monkeyhaus. Years ago, after John became dissatisfied with his prior cabinetmaker’s work, he partnered with Box’s owner, Anthony Abbate, a DeVore customer and woodworker, to take over the production of these products. In addition to crafting wood speaker parts for DeVore, Box manufactures its own branded audiophile component racks and custom furniture. 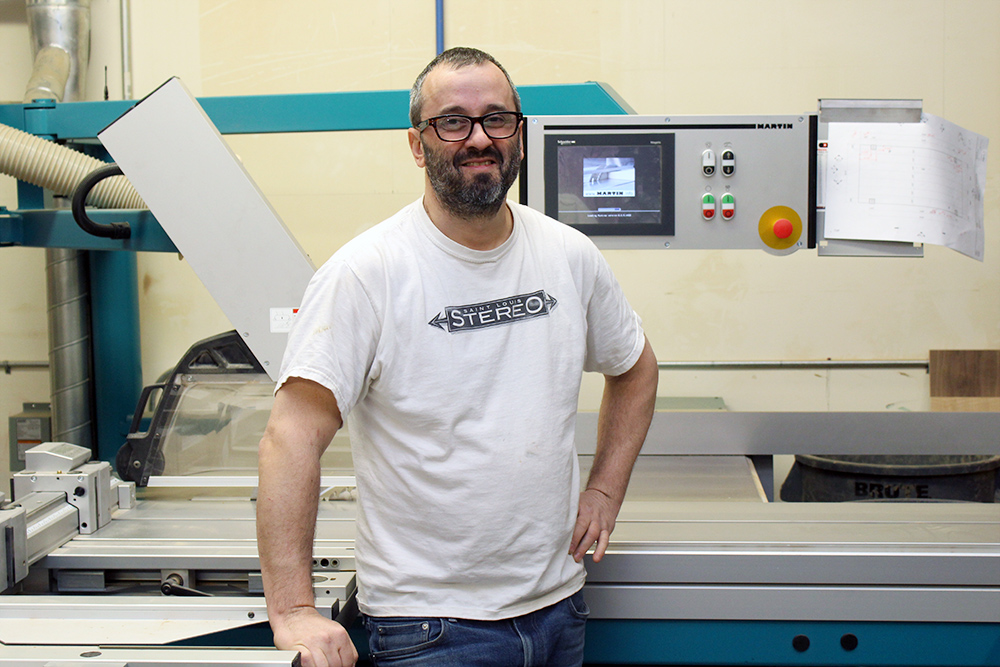 Venturing away from the Monkeyhaus for a bit, we visited Abbate, who escorted us around Box’s factory. There we saw many DeVore speaker cabinets being cut, mitered, sanded, and glued. The gluing takes place after the products’ parts are stained and lacquered at an off-site vendor equipped to work with potentially toxic chemicals. 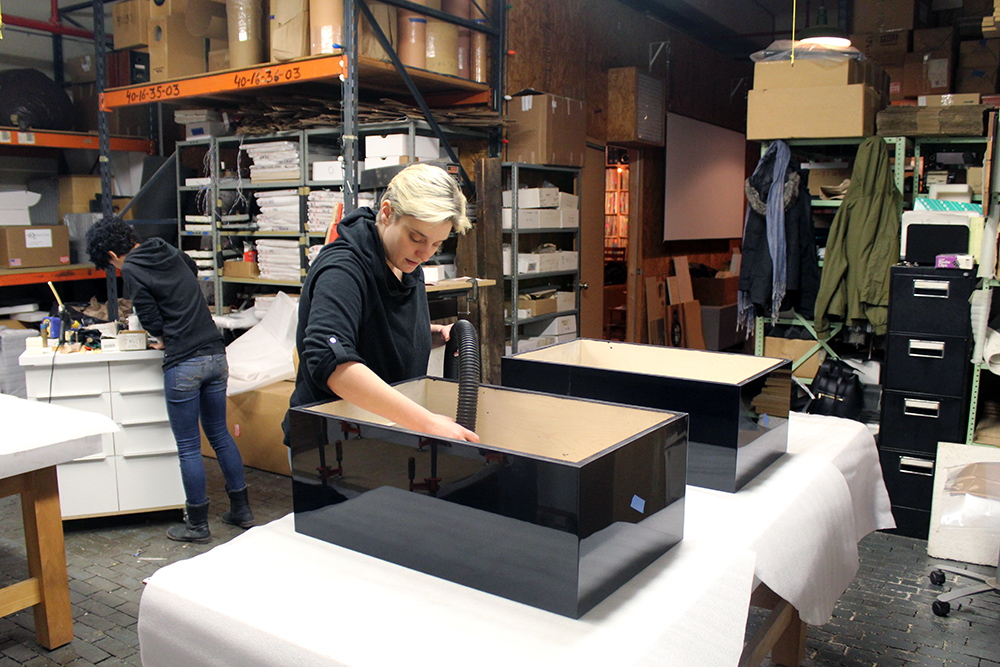 When we got back to the Monkeyhaus, John showed me the area where DeVore’s speakers undergo final assembly. There, the staff members were inserting into the cabinets -- and where necessary were soldering -- drivers, crossovers, internal wiring, and port tubes. John listens to every pair of speakers that leave DeVore, checking for proper assembly and making sure everything sounds A-OK. Finally, we visited the area in the factory where, after being serialized and boxed up, the finished speakers are lined-up to await shipment to dealers. 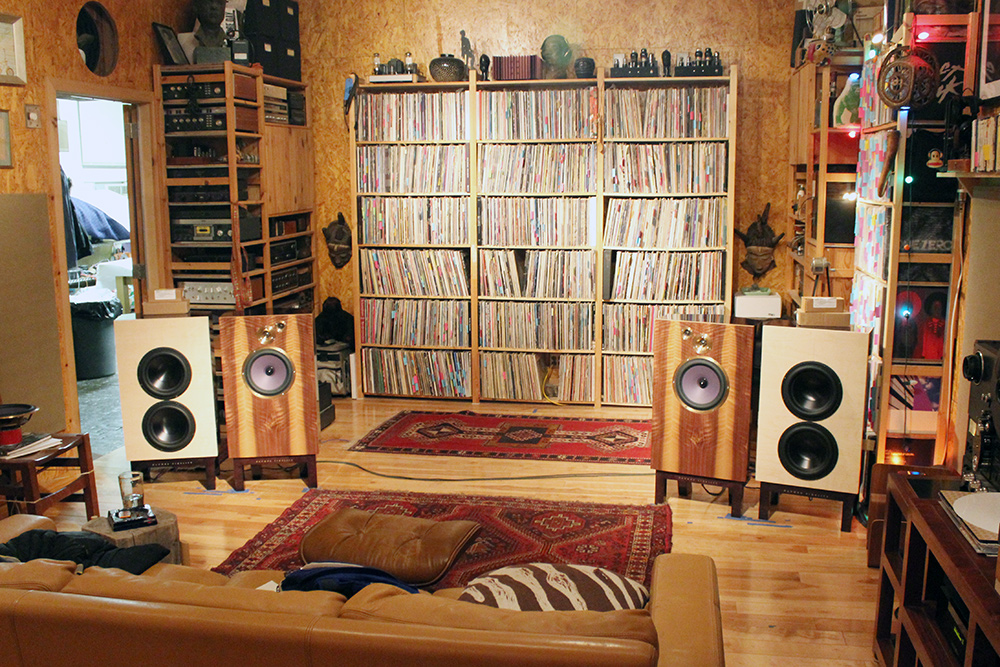 But back to the intriguing Orangutan O/Reference prototypes, which are composed of two towers per stereo channel, one designated as O/Reference A and the other as O/Reference B. The A tower, which is passive and ported, contains a .75" super tweeter and a 1" tweeter, both horn-loaded and with silk dome, and a 10" paper-cone woofer with an ALNiCo Magnet. These drivers’ chassis and the tower’s port tubes, cast and machined . . . 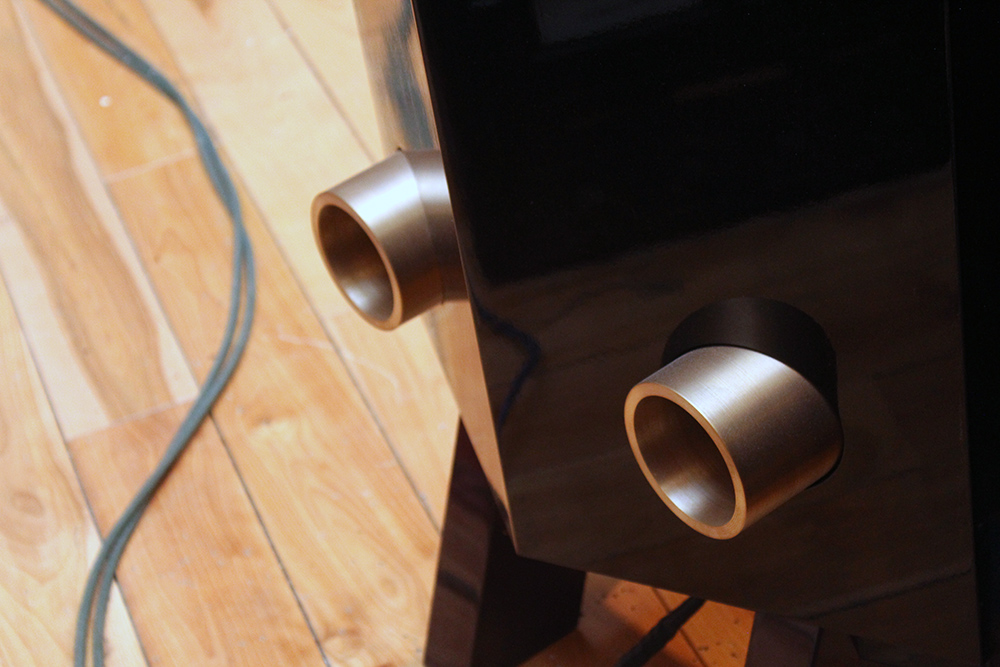 . . . from high-quality bronze, are strikingly beautiful.

The B tower contains a 10" woofer with an incredibly long throw of over an inch and a 10" passive radiator, both of which feature hard-anodized, specially lacquered aluminum cones. Powering the B-tower woofer is a 700W class-D amplifier. 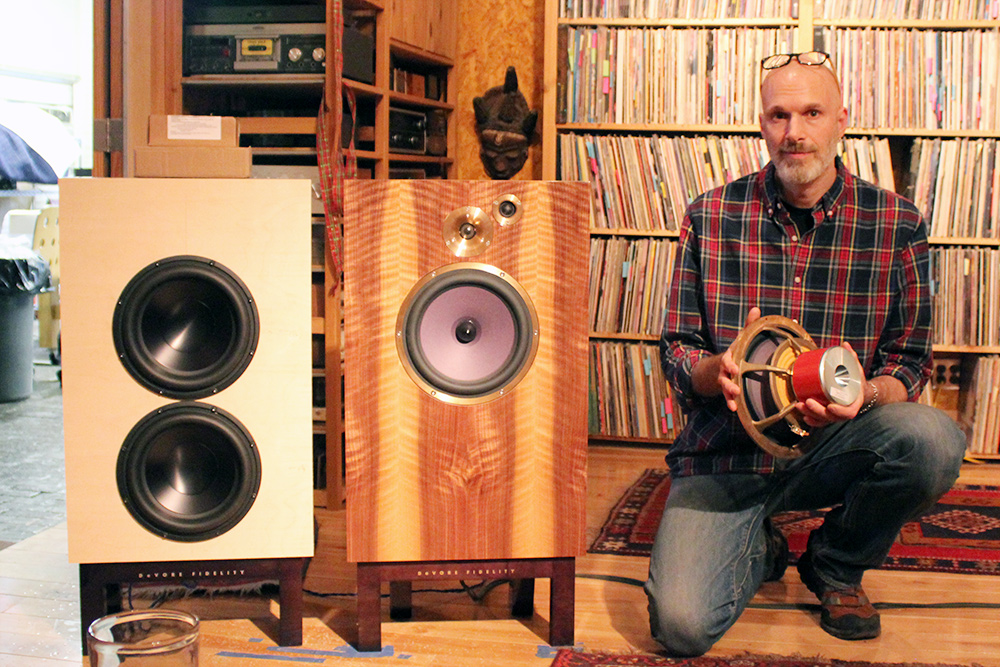 Of course, like all of DeVore’s speakers, the Orangutan O/Reference works well with low-powered tube amps. It has sensitivity and nominal impedance ratings of 98dB and 12 ohms, respectively, and an 18Hz-45kHz frequency range. 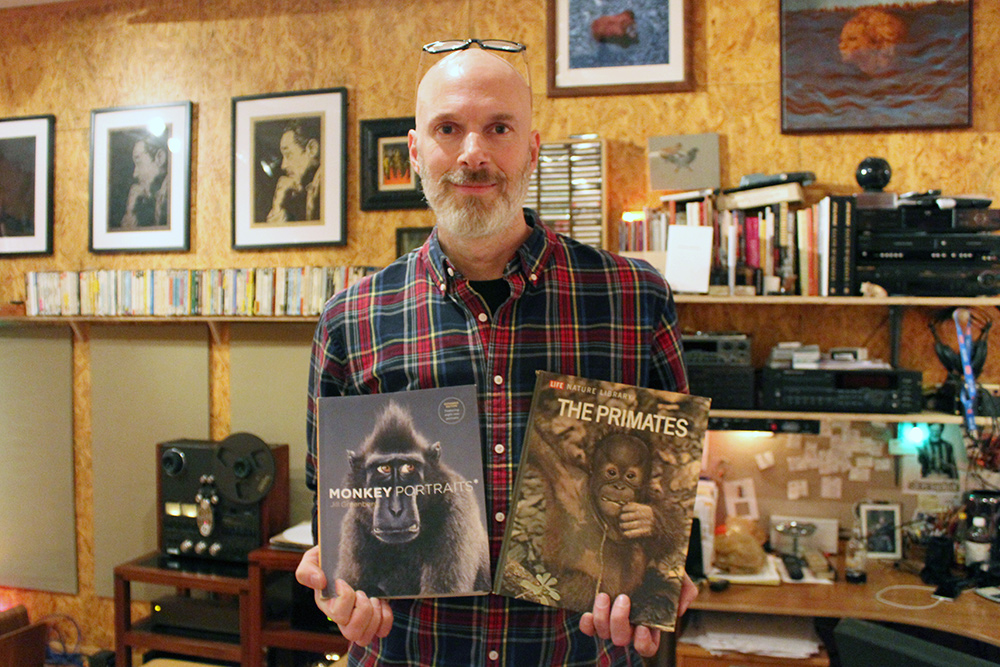 My visit to the Monkeyhaus was more fun than a barrel of you know what. You can be certain that I will be back there soon to report on future DeVore parties and hear the Orangutan Os in action. Even more importantly, kudos to John DeVore and his dealers for supporting some of the earth’s most threatened primate species.