As I said in “Part 3” of this series, Monitor Audio sent a Gold W12 subwoofer ($3300 USD) to pair with the Gold 100 loudspeakers I had in for audition. I’ve owned Monitor’s discontinued Studio loudspeakers for several years, and I wondered what the logical next step up the Monitor line would be. The Gold 100 proved to be a worthy successor to the Studio, although the improvements were more subtle than groundbreaking—after all, the Studio is a fantastic speaker in its own right. Would the W12 take the Gold 100s to the next level?

To compare the Studios to the Gold 100s, I enlisted my 16-year-old daughter, Abigail, and listened to several tracks via YouTube that were on her current playlist. For the Gold W12 subwoofer demo, I asked my 15-year-old son, Ian, to sit in, since I know he listens to more bass-heavy tracks than Abigail—yeah, mainly rap. Any audiophile knows that adding a subwoofer to a pair of standmounted speakers will significantly alter the sound of the system, but I wanted to see just what Ian’s reaction would be and how he would describe the differences he heard. 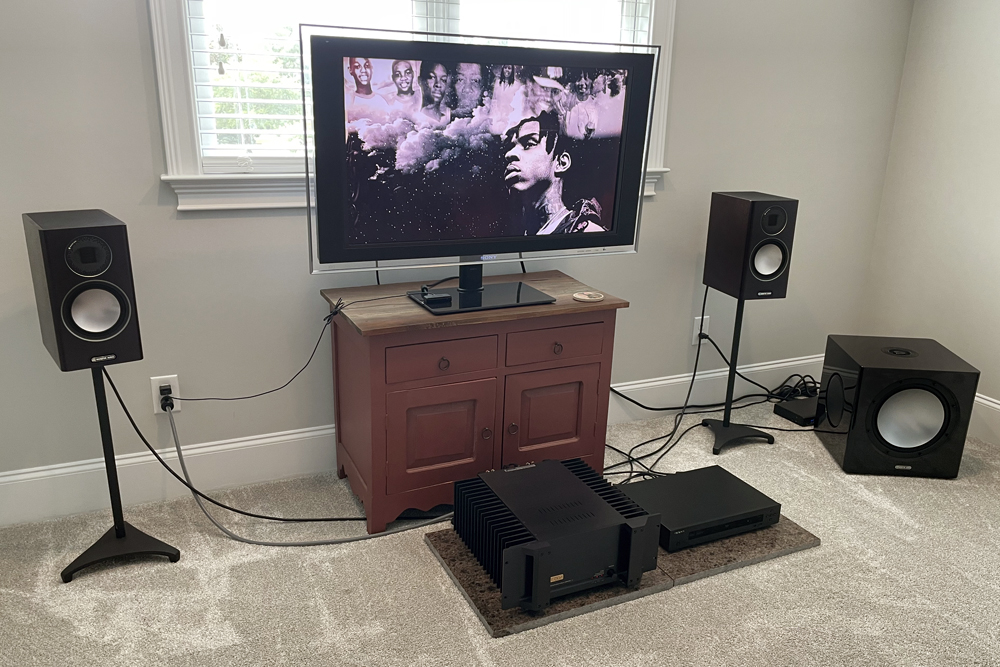 We started with “Through Da Storm” from Polo G (Die a Legend, YouTube, Columbia). The song had little punch without the sub, making what I heard sound like what I would imagine YouTube-sourced music to sound like—anemic. We then added the W12, and bam, Polo G came to life. All of a sudden the room flexed, and “Through Da Storm” just worked. “OK, YouTube can sound pretty good,” I thought. I noticed Ian’s head moving to the beat as deep bass pressurized the room. All the while, the vocals remained clear and intelligible. “Whenever the beat dropped, I could feel it,” Ian said. “It was bland at first, but then it sounded amazing.” OK, so I threw the W12 a softball with Polo G.

Jeff: “Ian, got any non-rap in your arsenal?” 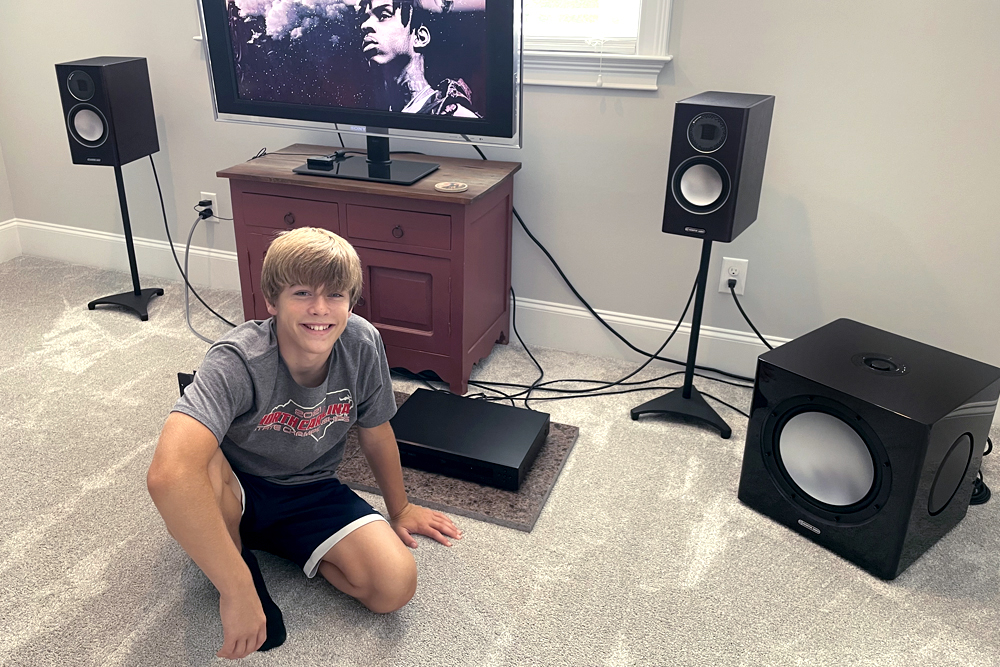 So I turned off the sub, and 24kGoldn (El Dorado, YouTube, Columbia) came on. Instantly this was better than Polo G with no sub. Even without the W12, I could hear a solid beat emanating from the Gold 100s. There was enough bass to get the song—and our heads and toes—moving. This was pretty good! In came the sub. Adding the W12 was definitely an improvement with 24kGoldn, but not nearly as dramatic as with the Polo G track. I heard and felt deeper bass, yes, but it was more of an extension of what I could hear with the Gold 100s alone. The sub with the Polo G track added elements to the reproduction that were totally nonexistent without it. “The instrumental parts stood out more,” Ian said. “The focus wasn’t just on the vocals.”

“‘Worry No More’ from Diplo, Lil Yachty, and Santigold.”

So on went “Worry No More” (California, YouTube, Mad Decent), and off went the sub. I have to say I liked this song more than the others. When the music began, the sound was pretty full and filled the room nicely. Vocals were easily discernible, as they were on the other tracks—the Gold 100s were doing a great job in the midband. But then we added the Gold W12, and we were back to dramatic . . . as in “You must be kidding—that’s great!” The entire atmosphere in the room expanded. The bass was deep and enveloping, and it fattened up what was, by comparison, a pretty thin performance. Ian agreed: “The sub made everything better. The added bass even made the vocals sound better.” Well wasn’t that interesting—my son was sounding like an audiophile after just three tracks! 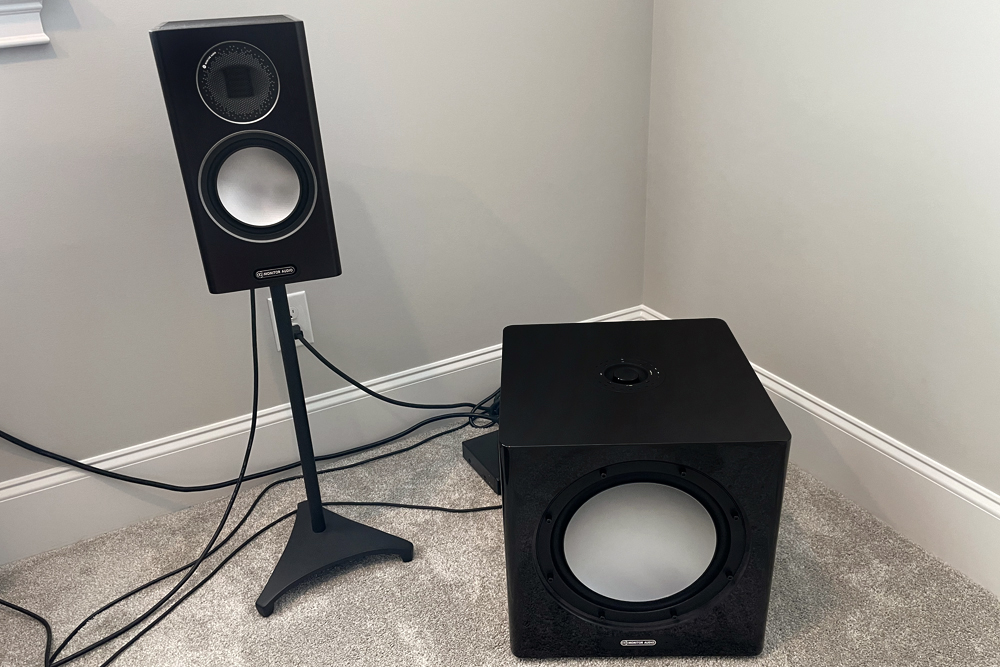 Admittedly, these were tracks that would certainly benefit from more bass. And they did. But this was really good bass.

I then routed some interconnects from a Hegel Music Systems HD30 digital-to-analog converter over to the Coda Model 11 stereo power amplifier and fed the system some high-resolution fare, including Norah Jones’s newest album, . . . ’Til We Meet Again (24-bit/96kHz FLAC, Blue Note / Qobuz). This track let the Monitors stretch their legs and show just what they were capable of. What I love about this album is the space that’s recreated in the listening room. The recording sounds very “live” with the right gear reproducing it, and that was certainly what I heard with the Monitors. I was impressed, though not surprised, that the Monitor Audio Gold 100s could scale higher with better-resolution music, and the W12 subwoofer never muddied things up—it was tight, tuneful, and in perfect balance with the 100s. 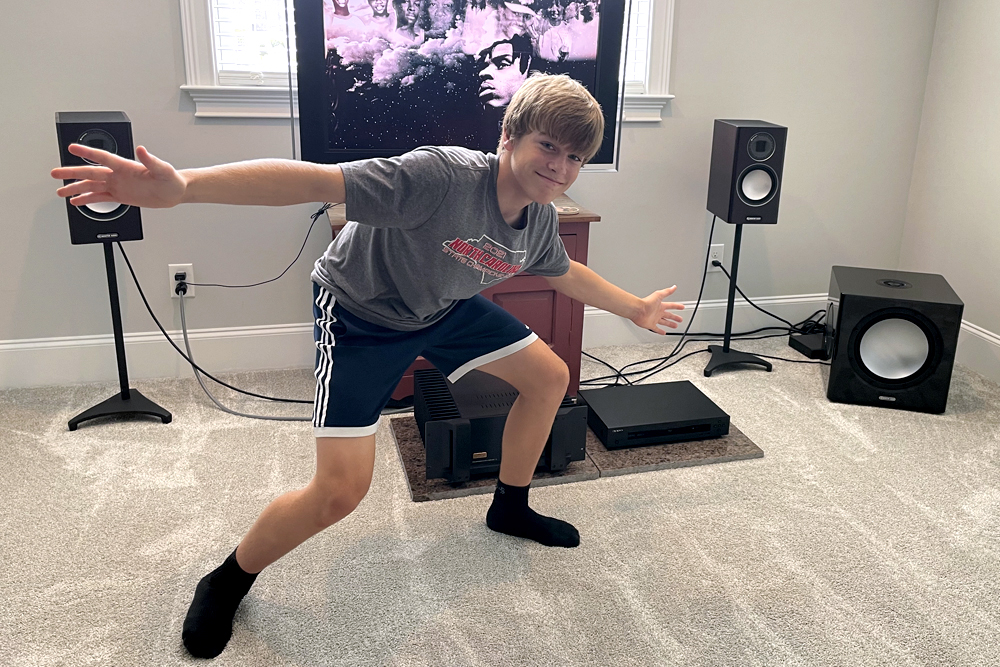 I loved my time with Monitor Audio’s Gold 100 loudspeakers ($2300 per pair) and Gold W12 subwoofer ($3300). What I realized was that I had a system that would work equally for YouTube and typical teenager fare to higher-resolution Qobuz tracks sourced from a MacBook Pro and fed through a top-notch DAC. For $5600, the system is full-range and beautifully built, and it provides tons of flexibility in terms of placement and setup options. I don’t think many floorstanders could match what I heard with this Monitor sub-sat system. It was pure gold—I mean 24kGoldn—for me and the kids.