Italy’s Sonus Faber just released its newest speaker line: Lumina. The lineup comprises the floorstanding Lumina III, priced at $2199/pair (all prices USD); the bookshelf Lumina I for $899/pair; and the center-channel Lumina Center I for $699. They are all available in Walnut, Wengè, and Piano Black finishes. It’s only a three-piece series right now, but because there’s a jump from I to III for the main speakers, it’s obvious that Sonus Faber has allowed some wiggle room to produce a Lumina II, which could be another bookshelf or floorstanding model, and perhaps even a Lumina IV on top of it all. Time will tell. 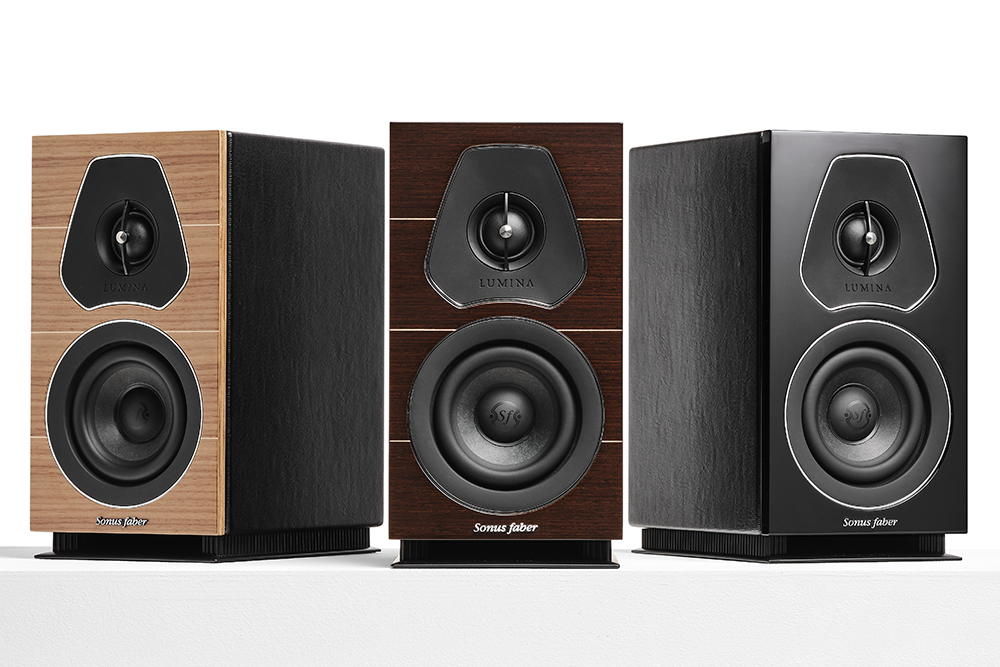 According to Sonus Faber’s press release, “‘Lumina’ in Latin means ‘light,’ but also a source of energy and life.” The release also explains that Lumina is “sort of [an] acronym” for them, with “Lu” meaning luxury, “mi” meaning minimal, and “na” meaning natural.

While news of these speakers is fresh, we’ve known about the Luminas for a few weeks. Near the middle of August, the company sent us a pair of Lumina IIIs in the Piano Black finish for review. Although I was originally slated to conduct the review, other things came up in my schedule, so we turned the task over to Diego Estan, whose speaker reviews appear on SoundStage! Hi-Fi and SoundStage! Access, the latter being where this one will appear. But even though Diego is now doing the review, I still wanted to take a look at the Lumina IIIs, so I helped him unpack them, because, as any audiophile familiar with Sonus Faber knows, the company is recognized in equal measure for producing speakers with distinctive sounds and spectacular appearances.

Sonus Faber’s focus on appearance began with the late Franco Serblin (he died in 2013), who founded the company in 1983. Serblin believed that speakers should do more than sound good -- he thought they also needed to adorn a home. And to do so, they had to be fashioned like fine furniture. Today, Paolo Tezzon, the firm’s acoustic designer, and Livio Cucuzza, its industrial designer, maintain the tradition of combining audiophile-grade sound quality with that distinctive visual style that has made the brand instantly identifiable. 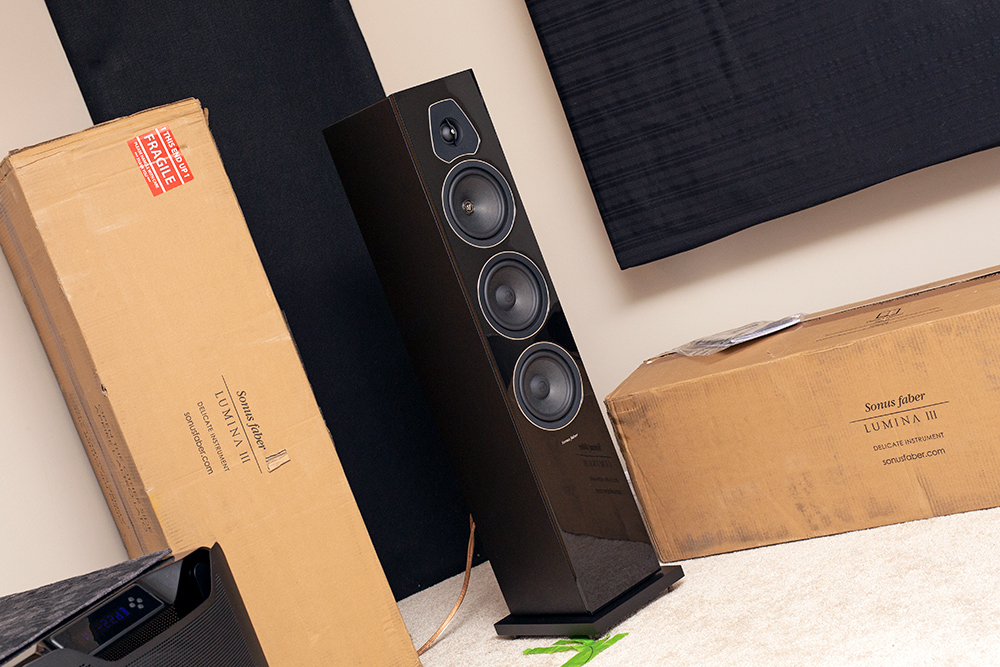 Since they’re priced at a bit over $2000 for a pair of Lumina IIIs and under $1000 for Lumina Is, one can’t expect the unique cabinet shapes found on the company’s upper lines -- Sonetto, Olympica Nova, Homage Tradition, Reference, and Heritage -- nor does one get them. All three models have straightforward rectilinear cabinets -- so, yes, a boxy shape -- but they’re all slim, so they’re not stubby looking. Rounded edges also soften their appearance. The Lumina I measures 11"H x 5.8"W x 8.4"D, the Lumina Center I is 6.6"H x 20.6"W x 8.4"D, and the Lumina III is 37.5"H x 9"W x 11"D, including the bottom-mounted plinth, which comes pre-attached to the cabinet (the cabinet itself is 36.75"H x 7"W x 9"D).

Yet throughout all the models there are still Sonus Faber earmarks that make them look distinctive and attractive. There is also this important point: the company manufactures the Luminas in its factory in Arcugnano, Italy, which is about 70 miles from Venice. There’s no outsourcing to China, like you often see in lower-priced speakers, even from Sonus Faber -- that’s where the company manufactured its now-discontinued Venere and Principia speakers. For those who want something handmade in Italy, Lumina delivers that. 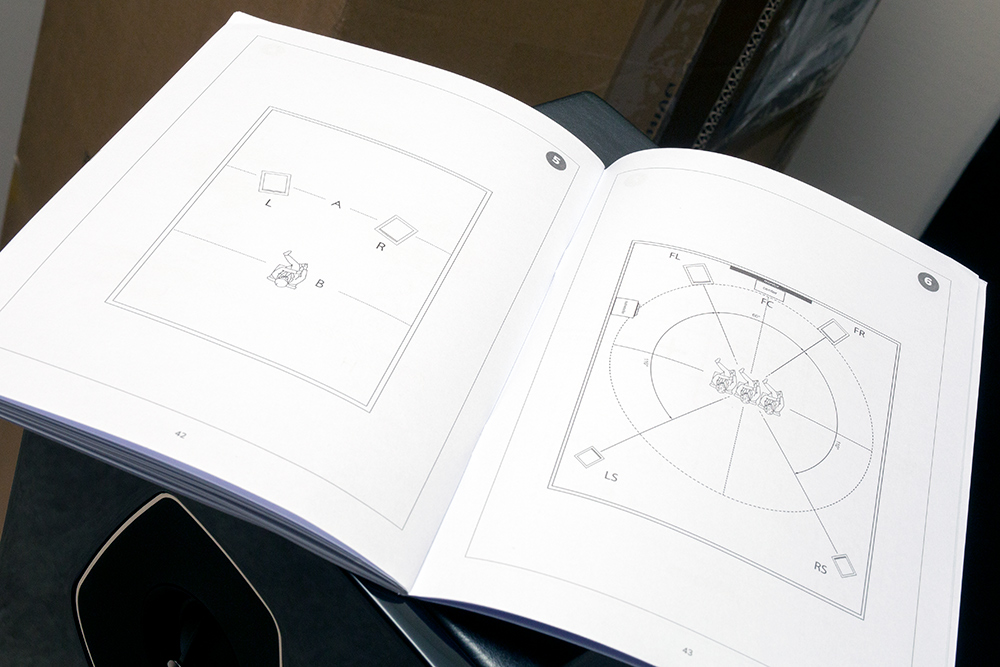 The Luminas’ sides and top are wrapped with a black faux leather, a material that finds its way into most of the company’s speakers. In fact, a Sonus Faber without leather is kind of like a pizza without cheese. Besides looking good, the leather has another benefit -- it’s durable, so it’s not likely to get scuffed or nicked the way a painted or veneered finish can.

The front baffle, which is “decoupled” from the rest of the cabinet with a viscoelastic material in order to improve the sound, is a multilayered MDF piece. It’s topped with veneer pieces of real wood for the Walnut and Wengè finishes, and high-gloss black paint for the Piano Black finish. And here lies my only gripe about the review samples. The finish work looked great on our review IIIs, but shiny black, no matter the speaker, is typically my least favorite finish, with the Lumina IIIs being no different. Furthermore, high-gloss paint of any color isn’t a Sonus Faber thing -- but wood is. So if I were buying a set of Luminas, there’s no doubt that I’d go for the Walnut or Wengè finish, both of which, with the coloring of the large wood pieces and the slender maple strips that run horizontally between them, more than hint at the incredible-looking wood finishes on the Olympica Nova and Homage Tradition lines. 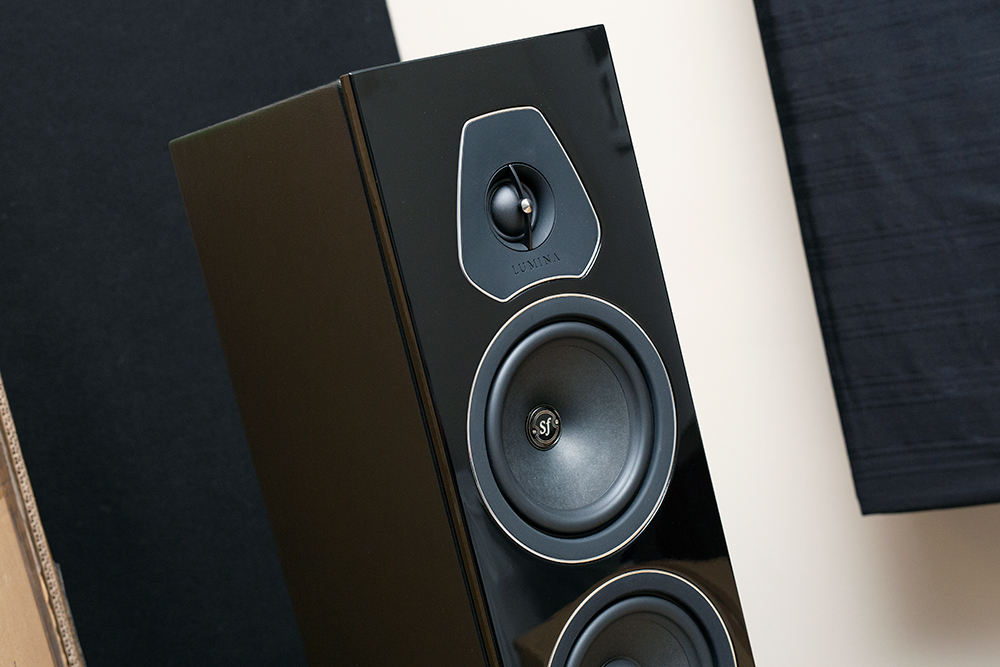 The driver complements are also immediately recognizable as being from Sonus Faber. All three models share the same 1.14" (29mm) Damped Apex Dome (DAD) tweeter, ubiquitous through all of Sonus Faber’s current models. Rated up to 24kHz, the DAD tweeter has a small spongy damper positioned such that it holds the center of the dome in place as it moves, to improve its dispersion. The Lumina I, a two-way, has a single 4.7" midrange-woofer complementing the tweeter. The Lumina Center I, also a two-way, has two of the same 4.7" midrange-woofers, one on each side of the tweeter. The Lumina III, a three-way, has a 5.9" midrange driver below the tweeter, plus two 5.9" woofers below the midrange to really flesh out the bass. The midrange-woofer, midrange, and woofer are bespoke Sonus Faber designs and have cones made with a blend of “cellulose pulp blended with other natural fibers,” just like the more expensive Sonus Fabers.

Assisting with bass output for each of the three speakers is a cleverly concealed Stealth Reflex port. With this acoustic arrangement, each speaker has a port that fires out the bottom of each cabinet, but the airflow from it gets directed out the front on the Lumina I and Center I, and all around the cabinet on the Lumina III. If you look closely at the I and Center I, you can see that they’re propped up on little plastic bases -- each base has a Stealth Reflex vent on its front. On the III, the port exit is on the bottom of the plinth. The I and Center I are rated down to 65Hz, while the III is said to extend to 40Hz. 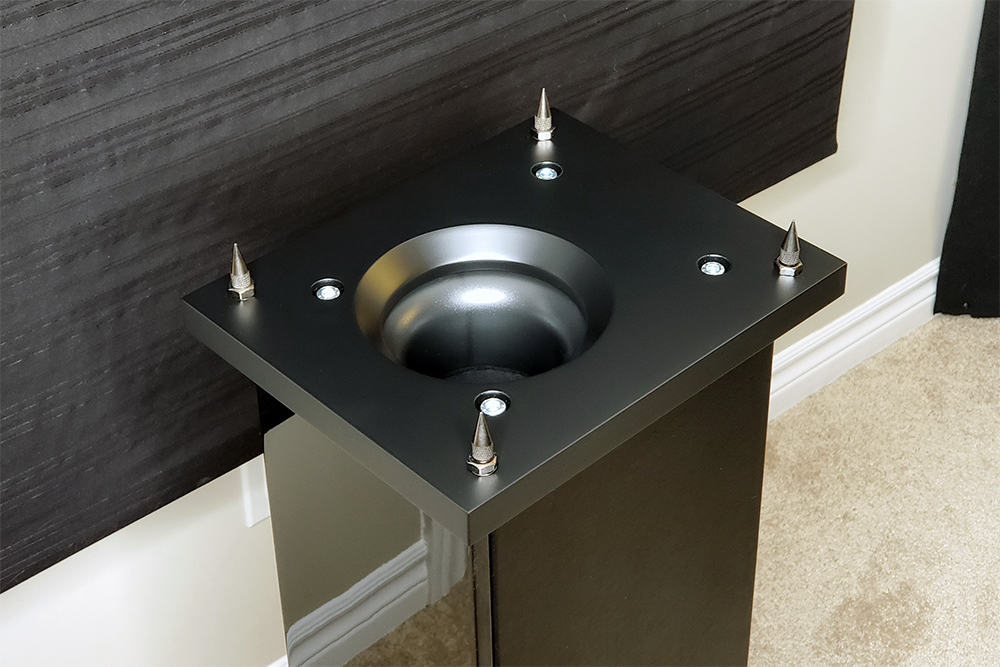 To my eyes, Livio Cucuzza and team did a fine job with the look of the Lumina lineup, even if I’m not the biggest fan of the Piano Black finish. But right after I saw the pair at Diego’s, I e-mailed Cucuzza to get his thoughts on the designs. Here is what he said:

Ludwig Mies van der Rohe’s “less is more” is an often-abused quote. We are used to the use of it even when its meaning has nothing to do with the topic. But in the case of Lumina, it is perfectly meaningful. Lumina incorporates the Sonus Faber essence in a very minimal package, including the silk-dome DAD tweeter and cellulose pulp cones that deliver natural sound; audiophile-grade crossover components; stealth front-firing reflex ports, which maximize bass efficiency and allow placements near back and side walls; leather covering; real Sonus Faber multilayer wood front baffles; and much more. The line includes everything except the lute-shaped cabinet, which is available in the Sonetto collection and above. That choice, the squared box, was the initial challenge. Can a boxy loudspeaker system be true to our brand DNA?

We, as a design lab, replied to that question during one of our strategic meetings about one year ago, presenting the very first prototype of a Lumina speaker. And the reaction of the team was so enthusiastic that we decided to go ahead with the project. That prototype was fresh, immediate, and, I would say, “instant friendly,” but behind the minimalistic appearance of Lumina was hidden a deep study of proportions and materials selection that represent the key of this new collection of speakers. I’m particularly proud of Lumina -- we made something different and fresh, staying true to our almost 38 years of history. Another often-abused quote, “innovation in the tradition,” is applicable here. 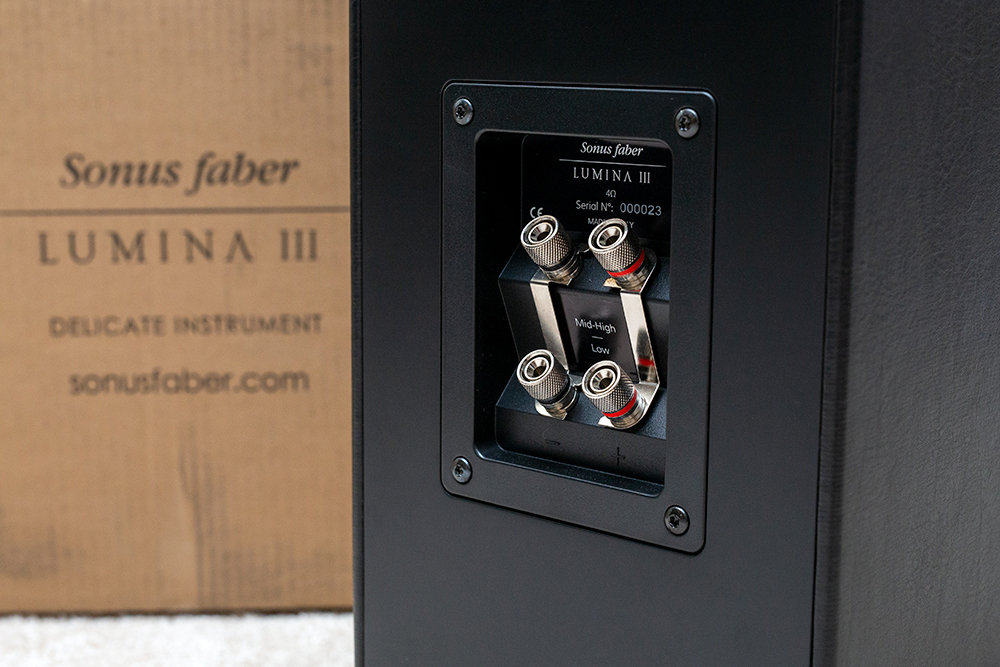 The only other important thing left to talk about is the sound, but I’m not going to do that here for one important reason -- the Lumina IIIs we have must be listened to more thoroughly. While I’ve gone on about what the Luminas look like, which can be assessed in minutes, if not seconds, Diego’s now in the middle of giving the Lumina IIIs a thorough sonic workout that will take a few weeks -- a necessary part of the process. After all, Sonus Faber didn’t build its reputation on looks alone. So you’ll have to wait until October 1, when Diego’s review appears on SoundStage! Access, for that part of the Lumina story.