At the 2019 Toronto Audio Fest, to be held October 18 to 20, Simaudio will publicly display for the first time its new Moon 680D DAC-streamer, which is priced at $9000 (all prices are USD). On October 2, however, I visited product manager Dominique Poupart at the company’s factory in Boucherville, Quebec, Canada, to see the first 680D that came off the production line and learn more about it. I felt it important to go there because Simaudio has long been known for producing some of the best-sounding digital-playback products in the world.

Poupart told me that the 680D DAC-streamer borrows so heavily from Simaudio’s statement 780D v2 DAC-streamer, which sells for $15,000, that you have to really look closely to tell them apart -- and even then it’s hard. The casework, for example, is exactly the same -- the only difference externally is the model name that’s silkscreened on the front and back. That means all the front-panel controls are the same, as are the rear-panel connections. Build quality is identical. There are no differences between the two insofar as the digital connection types (USB, AES/EBU, S/PDIF, optical, Ethernet, Wi-Fi, and Bluetooth), the formats or resolutions supported (up to 32-bit/384kHz PCM, up to DSD256, and MQA decoding), or the streaming system (Simaudio’s proprietary MiND2 software, which supports Tidal, Deezer, and Qobuz online streaming services, has multiroom capability, is Roon compatible, and has many more options). 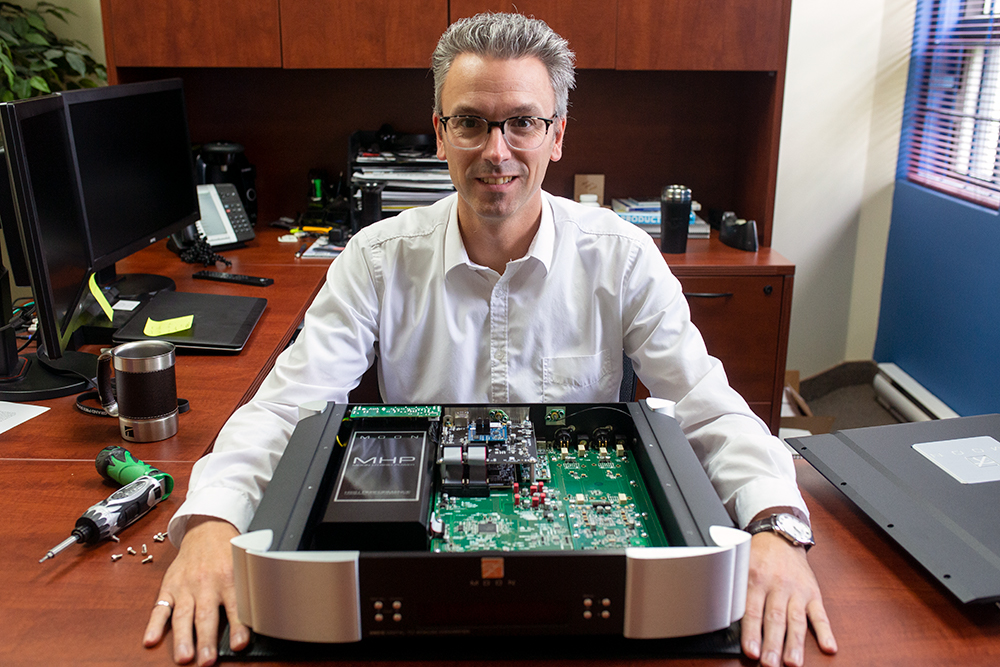 Dominique Poupart and the 680D

What’s the diff? Poupart had to get his electric screwdriver out and take the top panel off to show me -- but it still wasn’t obvious. He literally had to point at two small parts on boards many times their sizes so I knew.

One change is that the 680D uses one ESS Technology DAC chip compared to the 780D v2’s two, which are in a dual-mono configuration. Along with the chip difference in the 680D is a slightly redesigned digital board. Maybe that’s what accounts for the subtlest of differences in the two DACs’ distortion figures. Simaudio specifies THD (at 1kHz, 0dBFS, A-weighted) as 0.0005% for the 680D versus 0.0001% for the 780D v2. Intermodulation distortion is 0.0003% for the 680D and 0.0001% again for the 780D v2. And perhaps these changes account for the differing signal-to-noise ratio figures: 124dB for the 780D v2, 123dB for the 680D. These all tip in favor of the 780D v2, but in the grand scheme of things, they’re tiny differences beyond what human ears can detect. 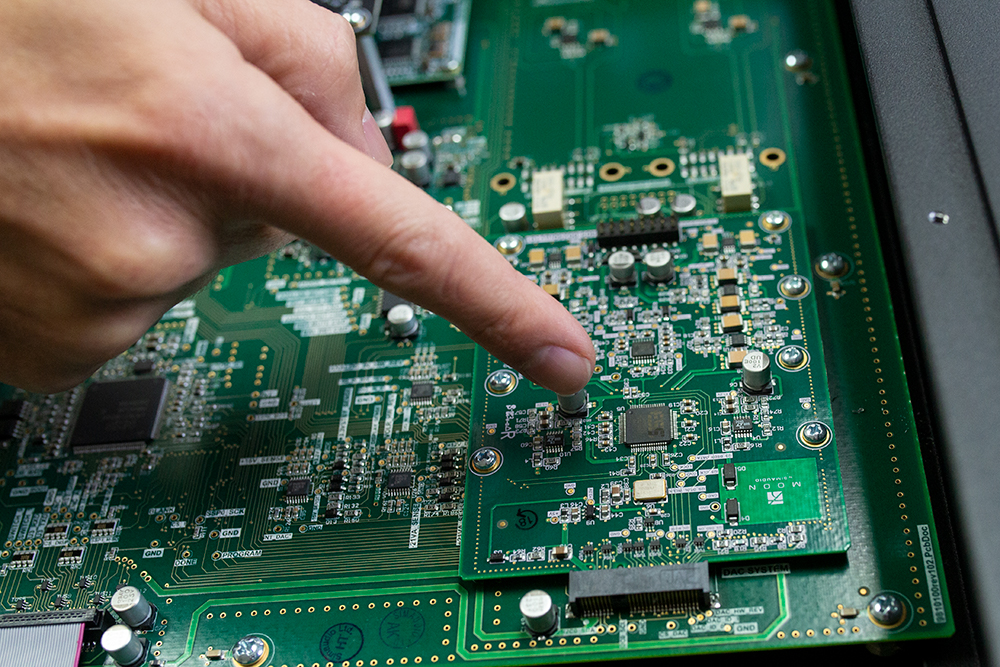 Pointing to the single DAC chip

Another change is the clock. According to Poupart, the 680D has a really good, low-jitter clock, but the 780D v2 has a “super-expensive femtosecond clock.” Translation: the 780D v2’s clock is more precise, which is why in the supplied specs, the 780D v2’s “intrinsic jitter,” which relates to the timing of the digital signal flowing through, is 150 femtoseconds RMS, while the 680D’s is 1 picosecond RMS (1 picosecond is 1000 femtoseconds).

But that’s it -- in the 680D, the main analog board, the Moon Hybrid Power (MHP) power supply, the control boards, the digital filters used, etc., are exactly the same as what’s in the 780D v2. So can anyone hear any differences with only those small changes and everything else unchanged? You’d really have to compare them side by side to know -- and unfortunately, I couldn’t hear either that day at Simaudio to satisfy my curiosity. But anyone who visits a Simaudio dealer can likely compare them -- or maybe they’ll have a 780D v2 and 680D in Toronto this month that showgoers can compare. 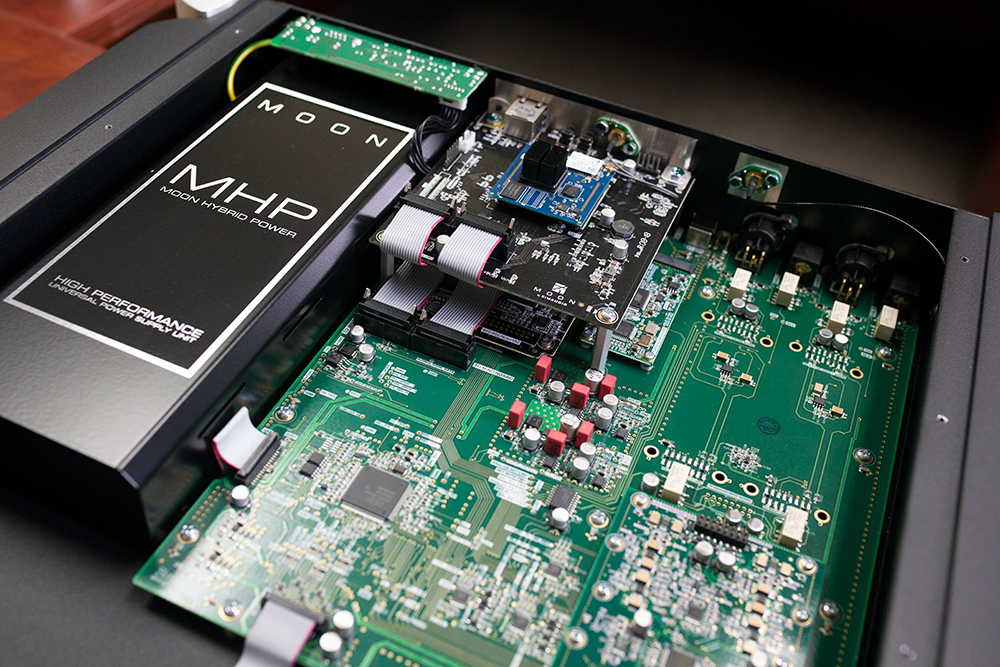 If you’re thinking that $6000 seems like a heck of a big price difference for these slight changes, you’re right. Poupart was frank with the reason why they could get the price so much lower -- they had to build the 780D, which became the 780D v2, basically from the ground up. So it involved a lot of R&D, which is expensive. With the 680D, they were working from the 780D v2, so it wasn’t nearly as much work.

So why did the company create the 680D if it could hurt the 780D v2’s sales? Poupart explained that it was mostly pressure from dealers and consumers to bring out a DAC that, insofar as price goes, would be a better match for its 600i v2 ($9000) and 700i v2 ($14,000) integrated amplifiers than the 780D v2 is. After all, it doesn’t make much sense to buy a DAC that costs more than your integrated amp, no matter how good it might sound or how many features it might have. It also doesn’t make any sense to steer any of these integrated-amp buyers to the brand’s 390, which is a DAC-streamer that costs $5300, but is also a full-fledged preamplifier -- something no integrated-amp buyer needs. Cosmetically, the 390 doesn’t match either integrated amp, either. The 780D v2 and now the 680D, on the other hand, are the same size as the integrated amps and have matching casework. In short, there was a hole in Simaudio’s product line -- and the company filled it in the most cost-effective way it could by tweaking its existing 780D v2 into a 680D and letting the consumer benefit from a much lower price. 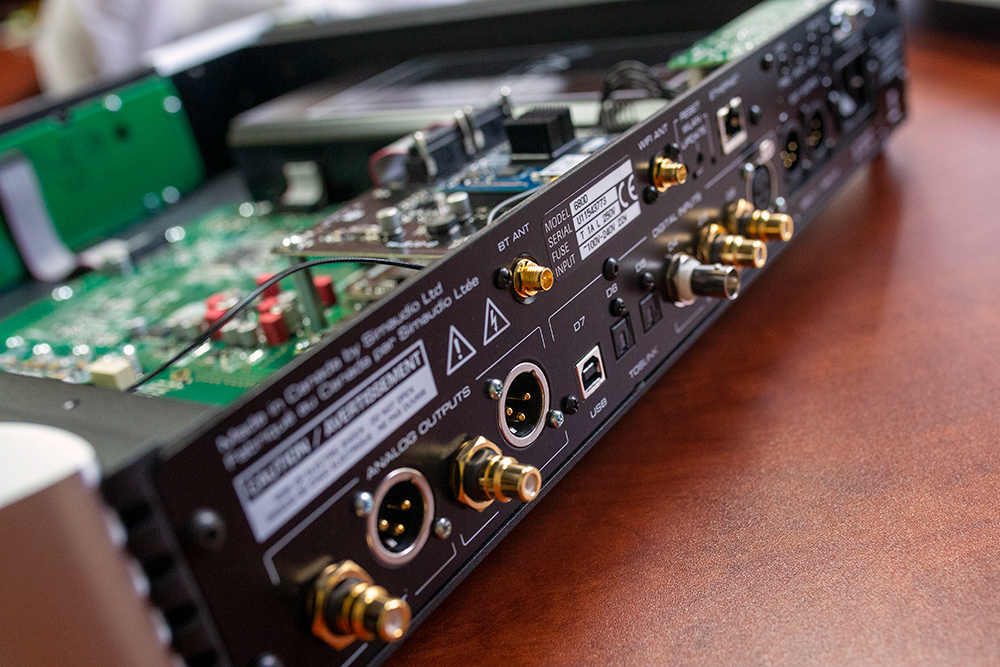 Poupart said he thinks that there will always be someone who wants the best and is willing to pay for it. I agree -- any compromise is unacceptable to some. That’s who the 780D v2 will still satisfy -- that model isn’t going anywhere. But the new 680D will attract those who are willing to live with the next-best model that sells for a whole lot less. Getting more than 90% there for 60% as much is too good a deal for many audiophiles to pass up -- and who can blame them?