On May 20, Lenbrook Industries brought a group of journalists to Ottawa, Canada, so PSB’s Paul Barton could show them the acoustics lab at Canada’s National Research Council (NRC) and explain what RoomFeel technology is and how it applies to headphones he develops there. Barton has been going to NRC since 1973, the longest of any speaker designer.

The Lenbrook name might not be immediately familiar to everyone, but most audiophiles will know the brands the company owns: PSB Speakers, NAD, and Bluesound. Barton founded PSB in 1972 and has been the chief designer since. More recently, he’s been involved with NAD and Bluesound whenever a product has at least one speaker in it. For example, he’s had his hands in NAD’s HP50 headphones and Bluesound’s Pulse Flex powered speaker, among many others. Assisting Barton at NRC were Greg Stidsen (NAD’s technology director) and Peter Hoagland (Lenbrook’s main press liaison). 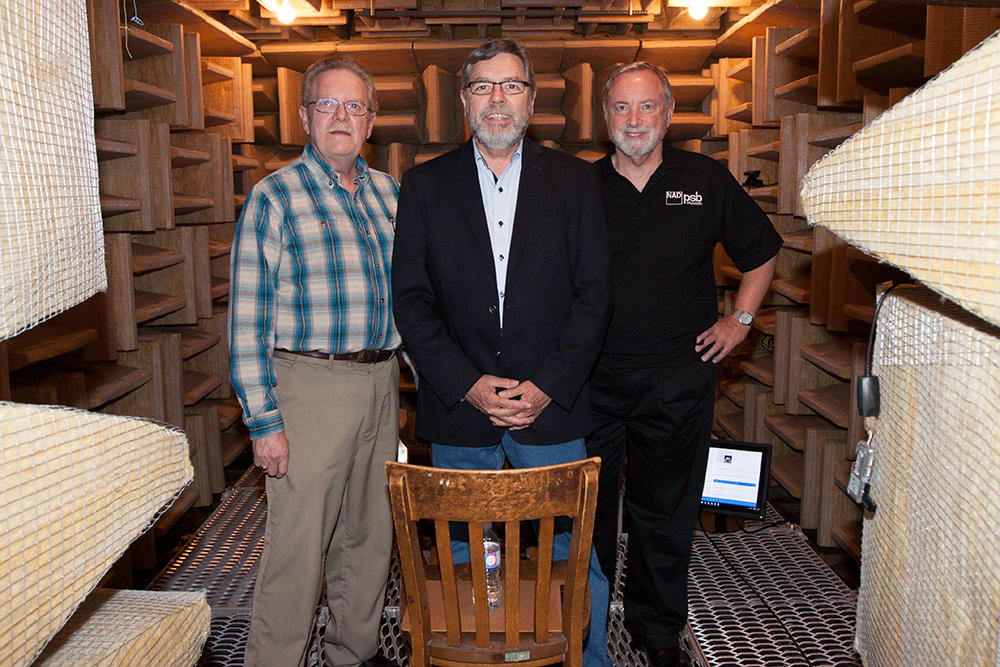 Since RoomFeel technology is intended solely for headphones, it is only applicable to PSB and NAD right now, since there are no Bluesound headphones (at least not yet). Within PSB’s line, there are the M4U 2 and M4U 1 over-ear headphones, and M4U 4 earphones. For NAD, there are the HP50 over-ear headphones, HP30 on-ear headphones, and HP20 earphones. These earphones and headphones have RoomFeel implemented, which, in a nutshell, has to do with the way the frequency response has been tailored in order to mimic the sound of loudspeakers playing in a real room. Why is that important? Because most music is recorded, mixed, and mastered with the intention that it be played through freestanding loudspeakers, not headphones. If headphones aren’t voiced to include room effects -- room gain in the bass frequencies being the biggest thing -- the music played through them won’t sound like the artists and engineers intended.

RoomFeel’s origins date back to the late 1980s and a project at NRC called Athena, which involved many of the biggest brains in the Canadian hi-fi scene at that time, including Barton. Most who participated look back at it now as a project too far ahead of its time, because it involved very advanced technologies, such as digital signal processing (DSP), that were not as practical to implement in consumer-based products as they are today. Still, some valuable information came out of Athena, including the so-called “target curve” -- basically, an ideal frequency response for a loudspeaker playing in a room that most listeners thought sounded better than speakers that didn’t adhere to that response curve. 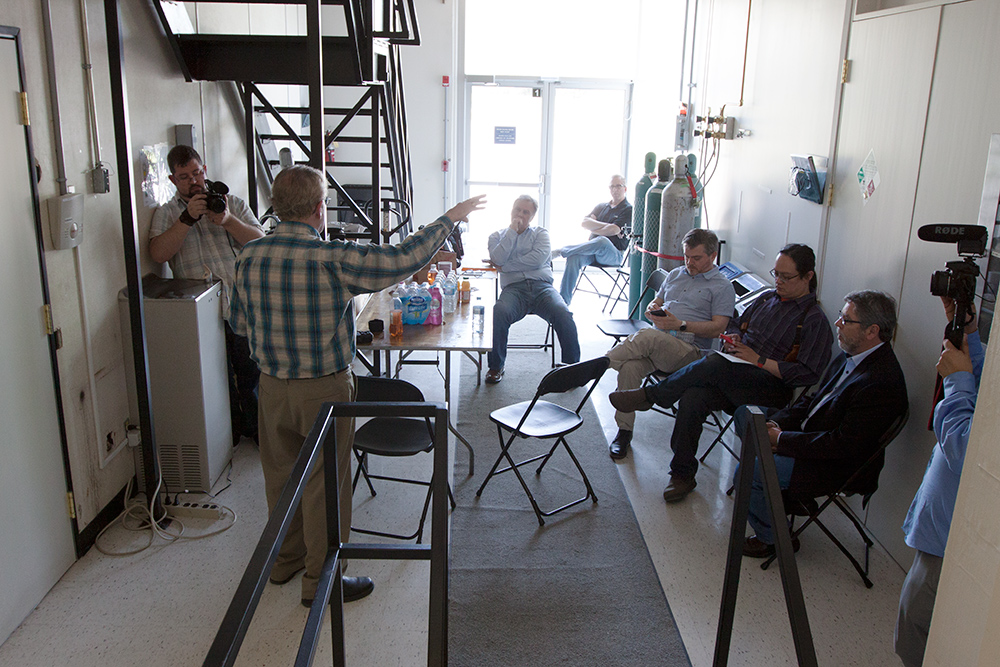 That “target curve” ended up being like a magic formula for companies that implemented it in their speaker designs. What’s more, that curve had legs -- many years after Athena concluded and DSP became more practical to implement, it wound up in some room-correction products from various companies, including NAD. It also formed the basis for RoomFeel, although Barton had to adapt it to headphones, since the Athena project involved only loudspeakers. Adapting it involved understanding how loudspeakers interact with a typical listening room versus how headphones behave when clamped to your head, then compensating for the differences to make the headphones sound like speakers do in a room.

However, the story isn’t yet over; in fact, with the way Paul Barton works, it’s not going to be over for a long time, since he’s constantly experimenting, tinkering, and learning. As a result, for the get-together in May, he rigged up an interesting RoomFeel sound experiment inside NRC’s anechoic chamber, where he set up two of his Imagine T3 speakers and a single SubSeries 450 subwoofer for the participants to listen to. Since an anechoic chamber is reflection-free, listening to speakers in there is akin to listening to headphones, in that there are no room effects -- there are no wall, floor, or ceiling reflections that arrive back at the listening position, and there is no room gain in the bass. It’s rather strange to listen in there. To this unique system, Barton added a twist, which is where the experimental portion came in: he programmed four frequency-response curves into the Dirac Live Room Correction Suite, which was running on the computer that also fed the 20 or so music files we could choose to listen to. With the click of a mouse, this setup allowed listeners to switch between the curves at will, as well as the songs (the changeover was instant), in order to evaluate the sound of each curve. Part of Barton’s goal was to show how even subtle changes in the frequency response could have profound effects on the resultant sound. I believe that another purpose was so he could test some curves so he could see which the group thought sounded best overall. The listening sessions were scheduled for about 30 minutes each, but in order to ensure everyone had a good seat, each session was confined to just two listeners. I listened with Greg Stidsen.

The first ten minutes of listening was a little confusing for Stidsen and me, since the system was new to us, as were the sounds of the different curves. However, after ten minutes, the differences between the curves became progressively clearer, to a point near the end where we could almost predict what the sound would be like before a track came on. 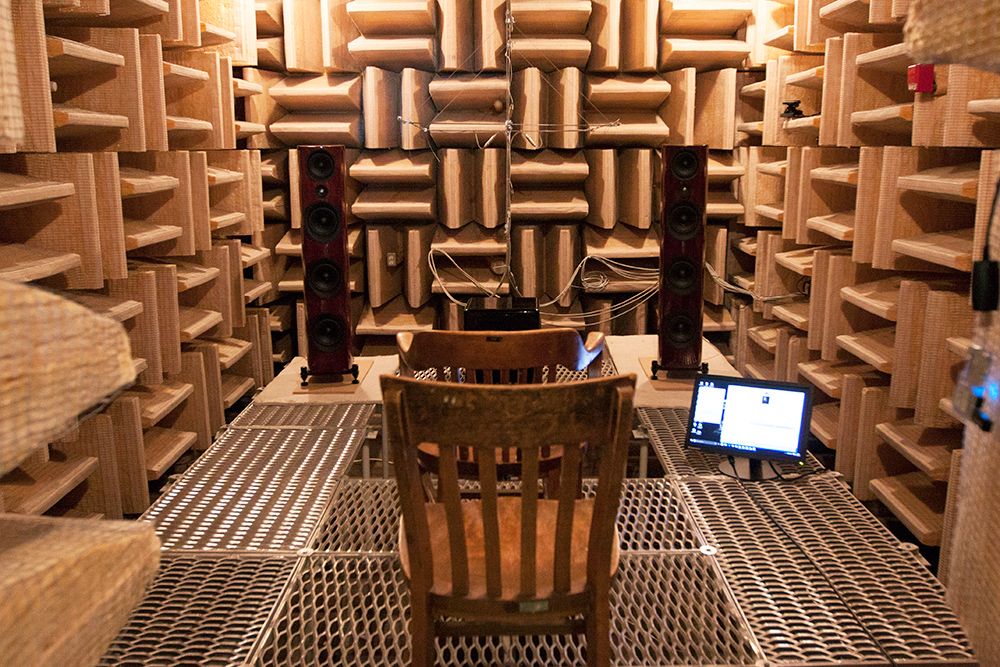 I found that the first curve had a tremendous amount of bass, but so much so that it overpowered the midrange and highs to the point that they sounded recessed, obscured, and not detailed enough. I didn’t like it at all. The second curve pushed the midrange and highs forward much more, allowing more detail in those regions to flow through, which I really liked. However, as we listened longer and through various tracks, we realized the bass was shelved down too much, leaving most of the music without a solid foundation. This resulted in pop and rock tracks not having enough weight and punch, while the orchestral pieces sounded too lightweight. The third curve had slightly less bass than the first curve, but more than the second, which seemed to be just the right balance, since the midrange was prominent enough and plenty of detail was still shining through. It was on this curve, however, that I found that the highs were too pronounced, making them sound brash and hard with most of the pop recordings. If I had to choose between the second and third curves, I’d choose the second one -- I find too-little bass more palatable than brash-sounding highs. Luckily, though, we didn’t have to compromise. The fourth curve sounded a lot like the third, but with the highs tamed down to an appropriate level. Overall, it was the most-balanced sounding of the four, and I thought it sounded the best.

Afterwards, Barton told us he would send us graphs of the four curves so we could see what they looked like, which I hope to get soon. What I also hope is that he’ll disclose the results of the different listeners, because although I know Stidsen and I were on the same page with what we heard, I have no idea what the others heard and wrote down, since we didn’t have time to discuss it as a group. I would also like to know whether one of the response curves was the original Athena intended specifically for loudspeakers and another was one that was modified for headphones. Alternatively, it’s possible none were Athena related, and Barton simply programmed in four curves that were brand new because he wanted to see what we thought of each.

Whatever the case, it was a fascinating experiment that I was glad to be part of. As I learned from Paul Barton over the years, when it comes to loudspeakers and now headphones, even though there was a lot of work already done in the past, there’s still plenty to learn about and improve upon now.