It's been a long time since I've written a blog entry -- way too long -- but there's good reason: I've been extremely busy working to improve the SoundStage! group of sites, a task that has required not only a lot of typing at my desk but also a lot of traveling. Ironically, there would've been many interesting hi-fi-based stories to tell in that duration, but there was just no time to get my thoughts into text. 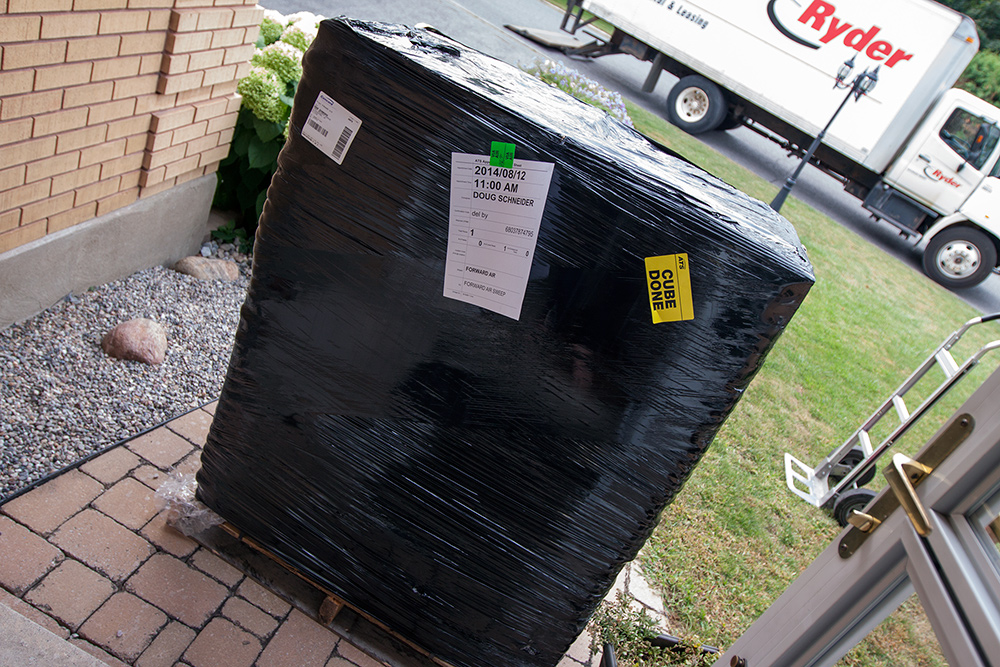 But now that new things are in place and working well, my workload is settling down a bit, which gives me time to blog. And there's no better place to start again than with the delivery and setup of the Sonus Faber Olympica III loudspeakers, which arrived at my house on August 12. After my review of the Revel Performa3 F206, slated to be published in September, the Olympica III will be the next speaker I write about. The III retails for $13,500/pair in the United States.

I received a formal introduction to the Olympica III in July 2012, when I toured the Sonus Faber factory, which is located in Vicenza, Italy. It was there that the company's main designers, Paolo Tezzon (acoustical) and Livio Cucuzza (industrial), allowed me to audition the Olympica III and the much-lower-priced Venere 3.0 ($3500/pair) back to back. Upon my return, I described what I heard in an article on SoundStage! Hi-Fi called "Listening to Sonus Faber’s Venere 3.0 and Olympica III -- and Some Naked Italians." I also requested some Olympica speakers for review for our publications. The first to arrive was the Olympica I, which Hans Wetzel wrote about for SoundStage! Ultra last April. Now, obviously, the IIIs have arrived. 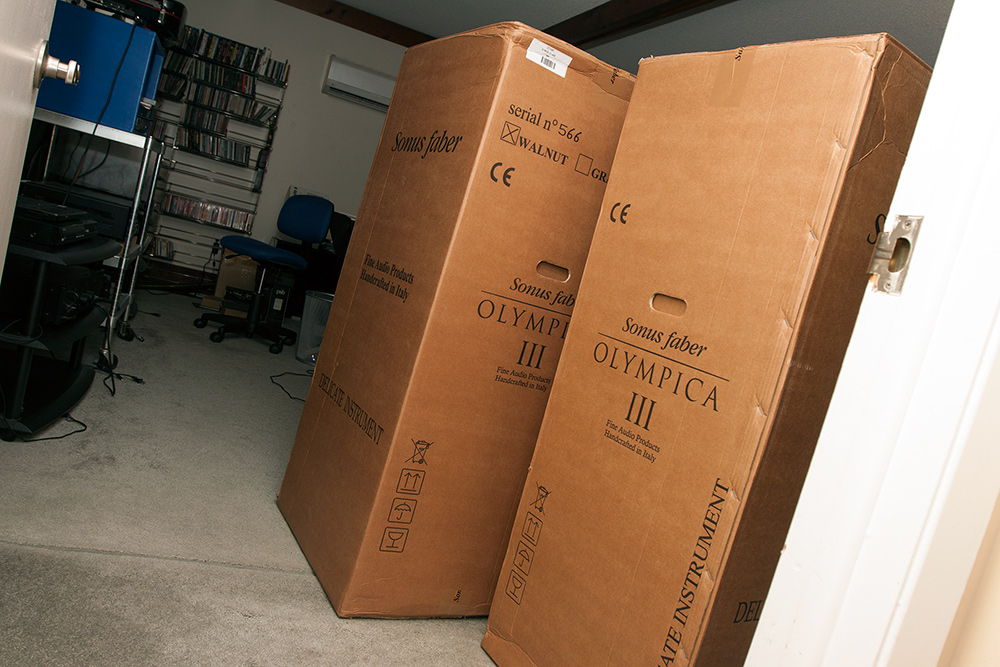 The first thing that struck me about the Olympica IIIs was how big the boxes seemed when they were lifted out of the truck -- huge! Way larger than I can remember the speakers being in Italy. But once I had the boxes upstairs in my listening room and opened up, I realized that there was a lot of air inside, particularly to each speaker's sides, done to protect it, which is very important given the exceptional cabinetwork. The extra width and depth of the box ensure that if it is lightly punctured, the speaker probably won't get hit. That extra space also makes for a more stable box, so it won't tip over easily, which I've seen many narrow boxes do, in turn slamming onto the ground and jarring the speaker inside, often destructively. 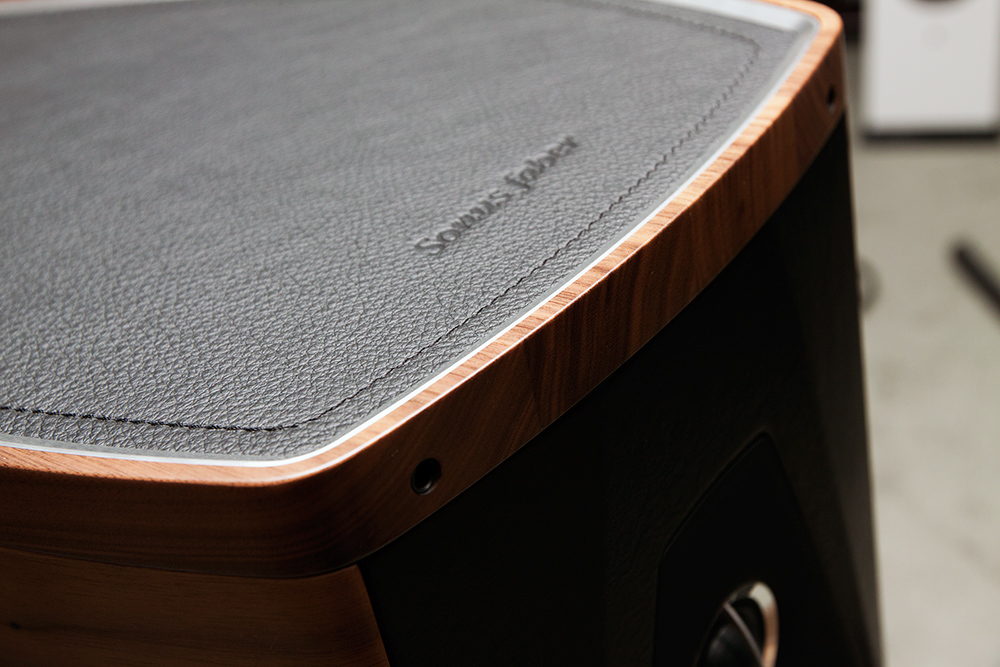 The next thing I noticed was the attention to detail -- and I'm not talking only about the cabinet's woodwork, which is the best I've ever seen anywhere, or the leather-clad front baffle and top piece, which are nice touches. I'm actually talking about other things -- for instance, the speaker comes shrouded in a cloth bag and is then wrapped again from top to bottom in plastic in order to fully protect it; soft-material straps swoop across the speaker's bottom in order to protect the finished wood in case you place it on a rough floor when you take them out of the box; the metal footers, which come in an accessory box at the top of the main box, are beautifully finished and look far better than any others I've seen; and the Olympica-series booklet and owner's manual, which are in with the accessories, are well-produced on quality paper. The Olympica III is a pretty expensive speaker, but commensurate with the price, as well as the topflight reputation of the company, are its build quality, styling, finish-work, and the above details that let you know you bought something that's a cut above. 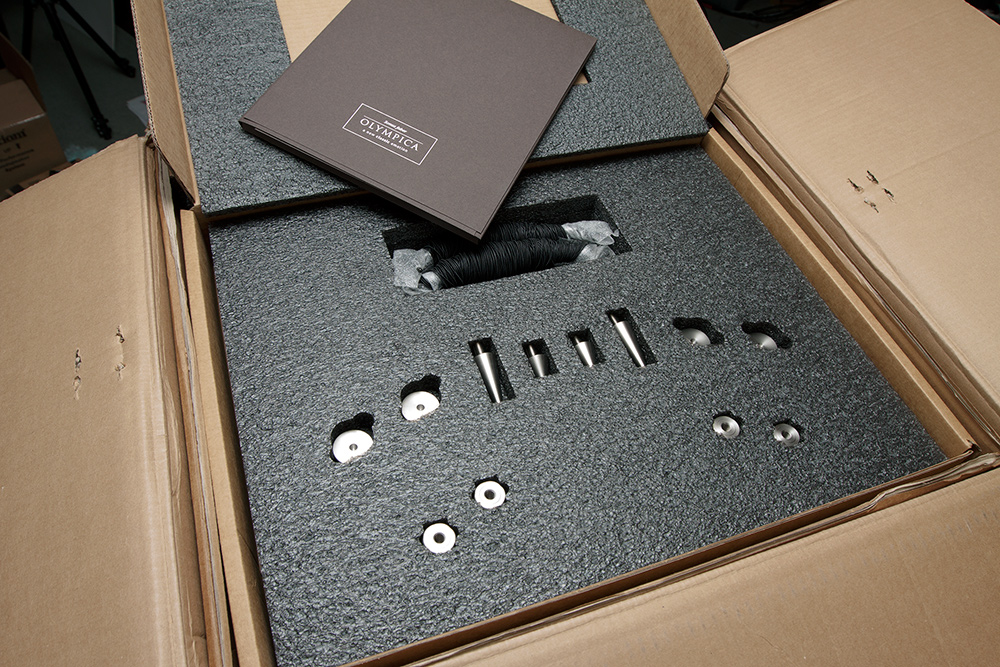 Once I had the footers screwed in, the final step was to position the IIIs in the typical places I put speakers of their size. This initial positioning would at least give me an idea of how they perform where other speakers do, and I'll adjust from there if need be as the review progresses. As the accompanying photo shows, I have a bevy of power amps to use the IIIs with: Hegel Music Systems' H30, Blue Circle Audio's BC204, Simaudio's Moon Evolution 870A, and Luxman's M-900u. The H30 and M-900u, by the way, are the next power-amp reviews I'm writing. 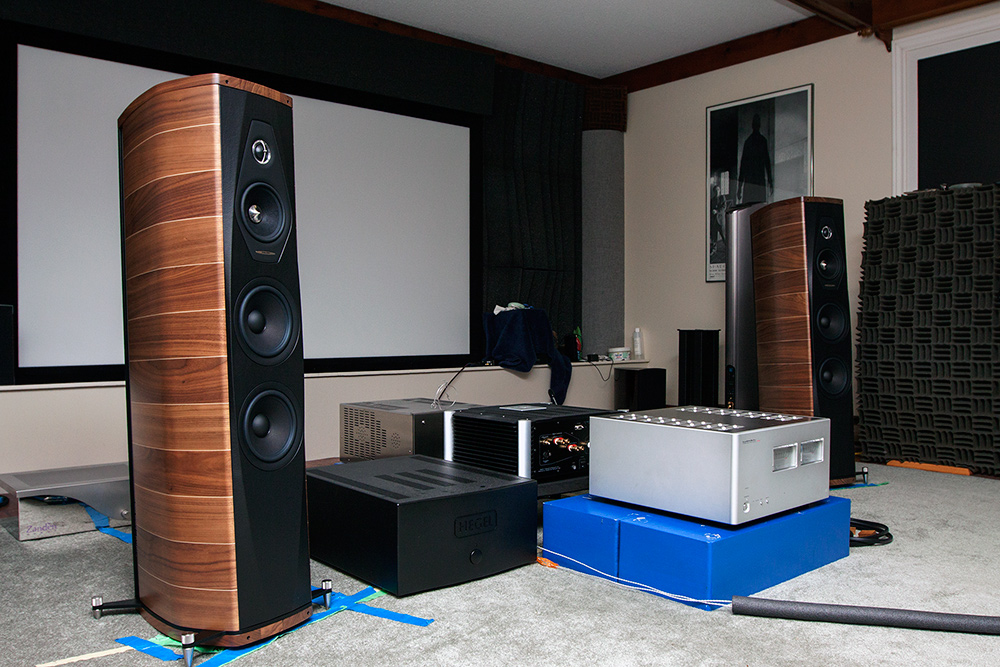 As I wrap up this blog post, I'm listening to the Olympica IIIs being driven by Hegel's H30. The sound is . . . something unique. But that's all I'll say for now. Look for my review of Sonus Faber's Olympica III on SoundStage! Hi-Fi this fall.