I don’t know about you, but I want my audio rack and isolation platforms to be made by a company that designs and manufactures isolation systems for nuclear submarines and advanced fighter jets. As far as I know, the only company that can do all of these things is Long Island-based Silent Running Audio.

I’ve written about SRA before. In 2010, I reviewed the company’s VR fp isoBase equipment platforms, and in 2009 I wrote an article based on a visit I made to the sound laboratory of Kevin Tellekamp, SRA’s owner. In those pieces I noted that SRA, which holds 40 patents, has its roots in the design and manufacture of vibration and acoustical solutions for, among others, the electronics, military, and medical industries. I also described the component-specific design approach SRA uses for its custom products: each one is built to support a specific model of audio component.

I love visiting and talking with Tellekamp, because SRA is always up to some really interesting things. Recently, he talked with me about some nonclassified design projects the company is working on, including one for the National Football League: a novel type of helmet cushioning that will reduce concussions and other injuries that players sustain from hard impacts.

New-product development at SRA is no less exciting on the audio side. Many audiophiles are familiar with the company’s equipment racks, which are found in some of the best audio systems in the world. Indeed, the company’s Craz2 rack, or isoRack in SRA speak, contains an expensive tubular titanium frame that’s tuned to eliminate the Q, or sound, of the rack’s framework. According to Tellekamp, just as every person has a fingerprint, every audio rack has a sound that directly correlates with its shape, size, density, and mass. The Craz2’s Q was eliminated by filling its titanium tubes with a mix of compounds whose efficacy had been determined through advanced computer modeling and testing.

But the Craz2 rack starts at $11,500. Fortunately, SRA will soon launch the Scuttle3 isoRack, starting at $7000 (the three-tier, double-wide configuration used in TWBAS 2012 costs $9000), or not much more than half the price of a Craz2. Unlike the Scuttle2, the Scuttle3 is a bespoke design. According to SRA, the Scuttle3 provides three times the isolation of the Scuttle2, which remains in production.

Of course, SRA is also known for its isoBase custom isolation platforms. Here, too, Tellekamp has been busy. In mid-2011, SRA introduced the Virginia-Class isoBase, which, the company states, provides approximately twice the performance of its previous top dog, the Ohio-Class XL plus².

The nautical term scuttle means to break apart or decommission an outdated vessel. For SRA and its new Scuttle3 rack, it means to break up or shift vibrations and their resulting sonic anomalies.

Like every SRA rack, the Scuttle3 just plain looks great. Its wooden frame is gorgeous, and its dark-gray shelves give it a very upscale appearance. I’m no interior designer, but I venture to say that the Scuttle3 will go swimmingly with a wide variety of décors.

Beyond its looks, it’s amazing what goes into the design and construction of an SRA product, and the Scuttle3 is no exception. Based on careful testing and computer modeling, each part of this rack is designed to limit or break up vibrations by causing them to “work” through the rack. As they do, each part of the rack plays a different role in limiting the propagation of vibrations.

Like that of the Craz2, the Scuttle3’sframe is designed to have no inherent Q. However, this is accomplished without the labor and expense associated with the Craz²’s titanium skeleton. Unlike the Craz2, whose Q is controlled,the Scuttle3 is designed from the start, from the special materials used through the assembly techniques, to have no sound of its own at all. 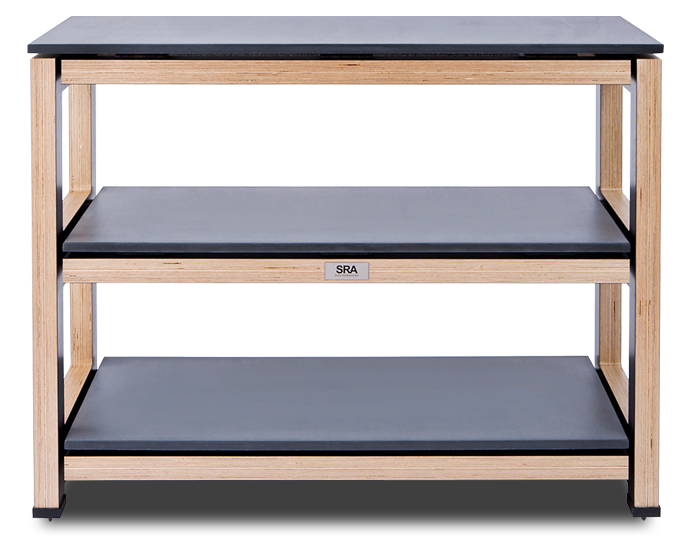 The Scuttle3’sframe comprises different hard and soft woods glued together in a specific order using three different types of vibration-killing viscoelastic adhesive. The result is a frame that functions not only as a ridged support structure, as do many other racks, but also constitutes one of a series of sophisticated barriers that work together to prevent resonances from reaching your components.

Further, the outside layers of the Scuttle3’s frame receive a coating of a black phenolic composite that provides considerable strength. Once this composite has been applied to the frame, SRA machines it into a slightly wavy pattern, though it looks random even when closely examined. This pattern helps frustrate the vibrational skin effect; i.e., the tendency of resonances to travel freely on smooth surfaces, growing in amplitude as they go.

A series of crossbeams that together comprise SRA’s Mass Load Support System (MLSS) runs from the front to the back of the Scuttle3’s frame and supports its shelves of 1"-thick composite. Like the shelves (described in more detail below), the MLSS is of the same computer-based design used in the Craz2 rack. It flexes with each vibration, thereby making the anomaly work in order to propagate itself through MLSS, and thus dissipate. It is made from composite or an alloy, based on the specific need of each build.

Sitting atop the MLSS and directly damping each shelf are SRA’s proprietary isoPods. Originally conceived for a classified military application and reengineered for use in the Craz2 racks, the isoPods are made of a material similar to SRA’s patented thermal-reactive urethane hybrids; among other properties, the material’s durometer (hardness) changes depending on the nature of the vibrations it is subjected to.

SRA custom-makes the isoPods for each Scuttle³ based on the customer’s specific requirements. Before the design process begins, the company reviews such parameters as equipment make and model, weight, weight spread, room size, the rack’s location in the room, and the flooring materials used.

I’ve used Sorbothane pods to isolate my system’s platforms and components. They worked at first, but over time, the weight of the platforms and components degraded the pods, which eventually went flat as pancakes. Unlike Sorbothane, the material used in the isoPods has been found to remain unaffected by fluctuations in temperature and humidity within a range of -459°F (absolute zero) to 500°F. According to SRA, an isoPod’s effective lifespan is at least 100 years.

In addition, a new brace and damping system, also specific to each customer’s application, is used on the rear of Scuttle³. This system ensures that the Scuttle3’s frame remains in precise square, thus allowing the shelves sufficient space to maintain 6° of movable freedom (6DoF), which Tellekamp states is of key importance in eliminating vibrations.

The Scuttle3’s shelves are identical to those in the Craz², and are made of SRA’s proprietary nanoparticle isoSheet material, which was developed based on SRA’s experiments with many substances, including Kevlar, carbon fiber, crystalline substrates, and acrylic. isoSheet has a dense, complex matrix structure with irregular voids; the space around each nanoparticle is, in effect, an air pocket; the size and density of the nanoparticles are engineered by SRA to defeat the propagation of vibrations. According to Tellekamp, the other materials mentioned above resulted in unsatisfactory control of resonances and/or sonic colorations. The Scuttle3’s footers are also made of isoSheet, which SRA claims effectively decouples the rack from the floor.

One reason that the Scuttle3 costs so much less than the Craz2 is because it takes much less time to build. Tellekamp himself hand-builds the Craz2 racks, and each one takes him some 200 hours. The Scuttle3 is built on an assembly line that goes through six different SRA departments and requires only 40 man-hours -- still a lot -- with little to no intervention from Tellekamp.

But don’t think that the Scuttle3’s custom design means that you can never change your components. If you do, the Scuttle3 is future proof: SRA will design new custom isoPods for your new gear at no charge (shipping included). According to Tellekamp, switching out the old pods for the new by the consumer takes only five or ten minutes.

As one would expect of any bespoke isolation product from SRA, the design of each Virginia-Class isoBase ($4300 to $5600 each) is a function of the component it will support and the environment in which it will be used. Each unit floats its supported component on a series of product-specific, custom-made shock absorbers that extend 4.5” into the unit. The absorbers contain a reactive, nonhazardous gas contained in a sealed compartment.

The Virginia-Class isoBase’s viscoelastic substance-filled footers are coated with a black, patterned, ceramic-based material that, like the material used to coat the Scuttle3’s frame, is designed to thwart the vibrational skin effect. The footers are then fitted with highly polished, heavily damped brass cones with adjustable stainless-steel spikes and locking nuts. Ultimately, the footers are placed in large, cylindrical, highly polished “chimneys” that extend into the isoBase. As dictated by computer modeling, these chimneys are made of either aluminum or a black composite, both of which aid in the removal of unwanted heat within the unit. 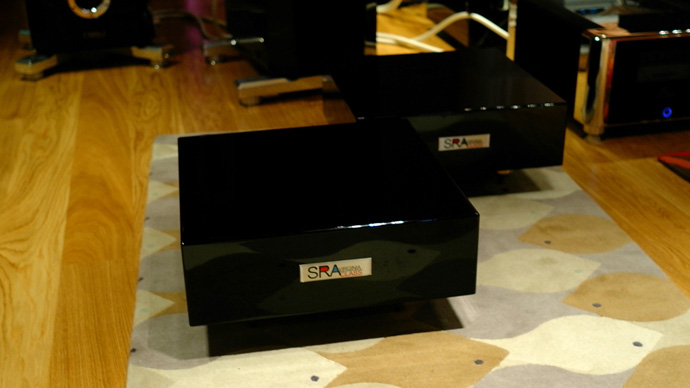 According to Tellekamp, the Virginia-Class isoBase begins isolating at around 0.3Hz, and provides nearly 35dB of isolation x - 5Hz. As always, no constituent component of it is “off the shelf,” and SRA uses neither Sorbothane nor any other material that it considers to be unstable.

I doubt there are many other audio isolation products out there as technically advanced and sophisticated as SRA’s Scuttle3 and Virginia-Class equipment platforms. As Kevin Tellekamp is happy to explain, Silent Running Audio creates cutting-edge isolation systems for customers who demand the very best for their military, medical, governmental, or commercial applications, and we audiophiles are the beneficiaries of that work.

I know I am. I purchased the VR fp isoBase platforms that I reviewed. I would be hard-pressed to think of any other company whose products so compellingly warrant a place in The World’s Best Audio System 2012.