In the days of my distant youth, many audiophiles lusted after one of the big open-reel tape decks from TEAC. These decks were especially popular with military personnel, who often brought them back from overseas assignments. Originally founded as Tokyo Television Acoustic Company in 1953, the company soon changed its name to Tokyo Electro Acoustic Company, then to TEAC Corporation. In 1987, TEAC launched high-end hi-fi brand Esoteric.

Esoteric’s goal has been to bring the highest level of expertly engineered audio products to the demanding professional and consumer. Its original products were the P-1/D-1 CD playback system and the R-1 DAT recorder. The P-1 was the first product to use the company's VRDS transport mechanism.

The Esoteric P-02 transport and D-02 DAC ($23,500 USD each) are two parts of The World's Best Audio System 2012 (TWBAS 2012), and respectively replace the P-03 and D-03 models in Esoteric's product line. These products aren't mere upgrades of earlier models; they represent the introduction of several significant technological developments, guided by this philosophy: Reproduce the inspiration of the original musical recording, free from stress and coloration.

Traditionally, many have thought of Esoteric's transport-DAC combos as two-piece SACD players. Although Esoteric's DACs have had typical digital inputs, I'll wager most audiophiles seldom thought of them as standalone components -- for quite a while, no one thought of external DACs at all. But with the sudden rise in popularity of computer-based music servers, that changed, and suddenly, DACs are again hot sellers. Indeed, for the purposes of TWBAS 2012, while the P-02 transport provides the vital function of SACD and CD playback, the D-02 DAC also serves the equally important function of decoding the output of the TWBAS 2012 digital music server, the WideaLab Aurender S10. Some of the spiffiest new features of the D-02 DAC will be available only if you also have a P-02 transport.

The D-02 DAC has a wide assortment of digital inputs, into which you can plug your dedicated music server, digital tuner, computer, or any other digital source. Inputs include USB, S/PDIF via one TosLink and two RCA, and two AES/EBU. There's also Esoteric's proprietary ES-Link3 input, designed to connect to the P-02 transport. An iLink connection provides the ability to play SACDs, which the D-02 does in native DSD mode, and which you can use to daisy-chain multiple D-02s to provide full multichannel capability. Asynchronous USB inputs that accept 24-bit/192kHz computer audio files are no longer rare, but the D-02 goes one better in offering asynchronous and adaptive inputs that support 24/192 files. Why bother with adaptive inputs? Apparently, some computers don't work well with asynchronous USB connections; this gives them a high-resolution interface they can work better with. 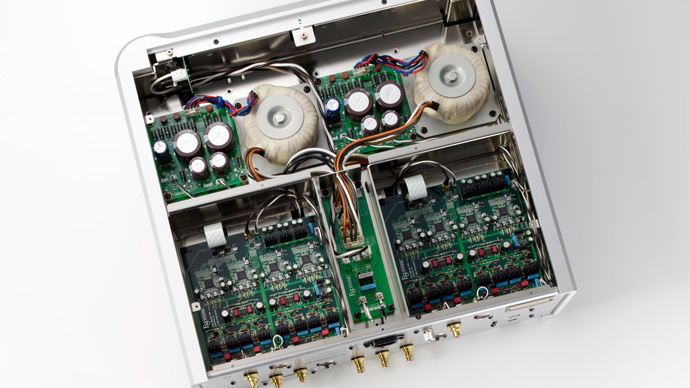 About those significant technology advances: The D-02 uses eight 32-bit DAC circuits (four AK4399 chipsets) per channel, wired together to achieve 35-bit processing. (Esoteric has applied for a patent on this.) The P-02 converts a CD's 16-bit/44.1kHz signal to 48-bit playback, which Esoteric says provides "extremely high-resolution processing capability in the digital domain. No matter how high the native signal's bit range, the input signal to the D-02 is converted internally to this extremely high word length. That means that the internal calculation error is extremely low: 2048 times higher precision than 24-bit processing." Even if a D-02 isn't used with a P-02, it's ready to accept 32-bit files should those become commercially available. The DAC chips are wired in dual-mono configuration, as is the entire D-02.

The innovations aren't limited to the D-02's digital section. The analog section uses a fully discrete class-A buffer with four amps per channel -- twice the scale of the K-01, the top model of Esoteric's line of one-box players. Esoteric says that the "multiple amp configuration will improve the instantaneous driving capability of the output signal, and the sonic result is much faster and better than a single amp/channel configuration."

The D-02 offers four digital filters -- you can tune it for best sound. There are two Finite Impulse Response (FIR) filters (the traditional steep cut-off filter), and two short-delay (aka apodizing) filters, the latter designed to "eliminate the pre-echo effect in the impulse waveform to reproduce a more natural audio signal without any delay." And all filters can be turned off. There are several upconversion settings -- x2 and x4 -- including one that converts PCM to DSD. As mentioned earlier, SACDs are played in native DSD. This may make the D-02 the most flexible DAC available.

The P-02/D-02 combination uses Esoteric's proprietary ES-Link3 or Esoteric's version of a connection standard, called Dual AES 8Fs. ES-Link3 is probably the highest-bit-range audio-data transmission standard available today, enabling it to support Digital eXtreme Definition (DXD) data transmission, an evolution of the DSD format. The Dual AES 8Fs (ES-Link3) input uses two balanced connectors to support high-bit-range audio signals. The maximum sampling rates from the P-02 are 48/176.4 via ES-Link3 and 24/352.8 via Dual AES 8Fs. These connections also reportedly achieve higher precision with CDs and more advanced LPCM files. Thanks to Sony's licensing provisions, the iLink connection is still the only one that will allow native SACD data to be sent to external DACs outside the Esoteric line. For convenience, iLink uses FireWire connectors and cables, but iLink is actually incompatible with FireWire; it's an audio-only connection protocol owned by Sony. 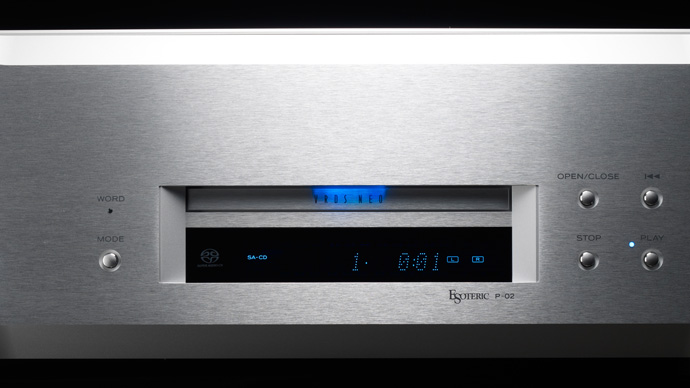 A player's jitter performance is only as good as its clock, and the P-02/D-02 combination has some innovative circuits for handling the clock signal. Rather than route the clock output through a phase-locked loop (PLL) circuit to stabilize its output, the P-02 and D-02 are directly connected by an ultraprecise 22.5792MHz master clock signal, generated by a clock module with a separate power supply isolated from the rest of the system. The D-02 also has a 32-bit digital attenuator for direct connection to a power amplifier.

Esoteric's VRDS-NEO models have long been the best transport mechanisms money can buy. Many of Esoteric's competitors use VRDS-NEOs in their top SACD players -- the highest tribute I can think of. Of course, the P-02 uses the latest and best version of the VRDS-NEO transport, the VMK-3.5-20S, which also has its own separate power supply. After all, an audio component is only as good as its power supply, and the P-02 and D-02 have no fewer than eight power supplies, each with its own hefty toroidal transformer. 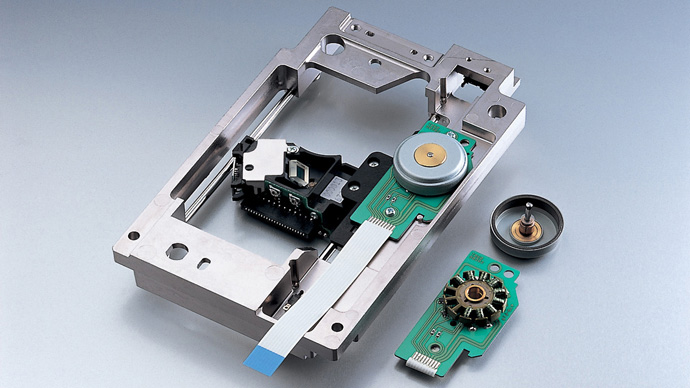 This latest version of the VRDS-NEO transport uses a laundry list of impressive parts, including ceramic ball bearings, a duralumin turntable, and a "strong neodymium-magnet-driven coreless, three-phase brushless spindle motor." The transport alone weighs 11.5 pounds -- more than many CD players! Digital outputs are plentiful: two XLR, one coaxial RCA, and iLink. The P-02 is also compatible with ES-Link3. 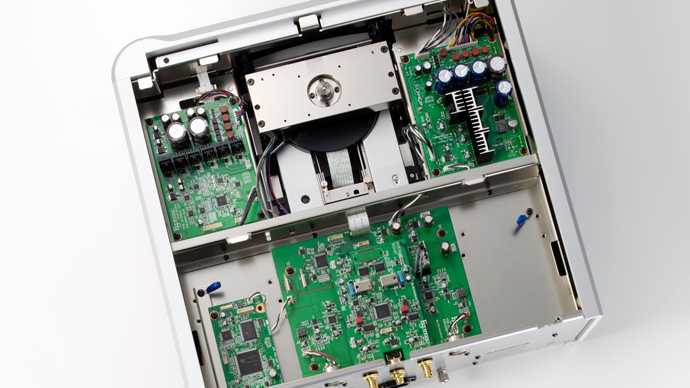 If you're paying $47,000 for a pair of components, you darned well expect them to look the part, and the P-02 and D-02 combination look as good as they sound. Their sculpted silver enclosures are similar in style to those of other recent Esoteric models. To say that they're sturdily built flagrantly abuses the term understatement.

High technology for the highest-end system

The Esoteric P-02 SACD/CD transport and D-02 D/A converter advance the state of the art with superb engineering and technical advancements that lesser companies just could not produce. Their many features make them the true Swiss Army knife of digital playback, and that makes them ideal choices for TWBAS 2012.