Analog is just wonderful in my books. It's arcane, elitist, and fussy. That might seem like a strange group of adjectives to use for praising an audio format, but it's a big part of the draw, man.

The arcane and elitist parts intrude on each other's turf. A great many kids don't even know what records are, so that keeps analog on the fringe, while the relatively high price of entry keeps out the riff-raff.

Good analog gear doesn't have to be that expensive, though. An entry-level Pro-Ject turntable costs about the same as a low-end CD player, and thrift-store records -- while not as common as they used to be -- are still available for next to nothing. But take a look at record-cleaning machines and you'll think that analog is restricted to oil barons. You could easily spend 500 bucks on a vacuum-powered machine, and the prices just skyrocket from there. 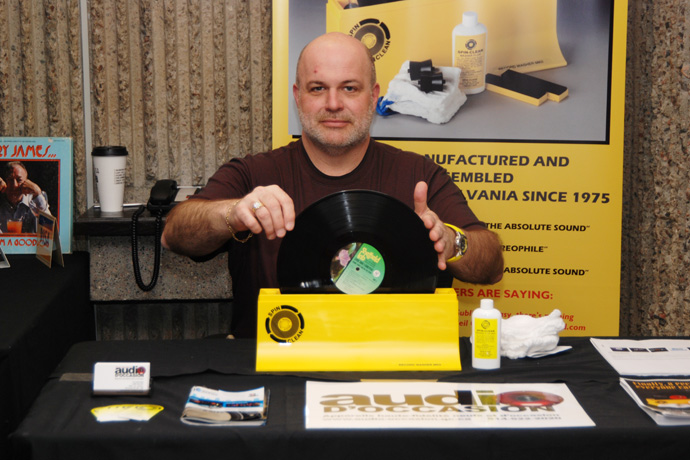 But there's hope! As I entered the Moonbase Alpha catacombs of the Hilton Bonaventure, I bumped right into the Spin-Clean display. Mark Mawhinney was proudly displaying the Spin-Clean Record Washer System Mk.II, which I've read about but never seen in person. When I viewed the SCRWS online, it looked kinda hokey -- like a companion for the Slap Chop. But seeing it in person, demoed by Mark, I understood the brilliance of the design. Rather than rubbing fluid into the surface and then sucking it off, as with the vacuum-powered machines, the SCRWS goes one better. Contaminants are literally washed off and suspended in the solution bath. You spin the record by hand and the two pads suspended in the fluid wash the record. Keep the record turning and the label stays dry. Simple, no? Using the supplied lint-free cloths, just dry the record and you're done.

I plan on picking up one of these rigmaroles. I own a Nitty Gritty 1.0, which is about as hair-shirt as vacuum-powered machines get. But I think I'll still use the NG unit to dry off the records after the SCRWS is done washing them. Use it or lose it, I say.

And the best part? This gizmo, which is made in Pittsburgh, USA, retails for (that's right, folks!) $79.99. While you don't have to act now, I wouldn't be surprised to see the price rise soon. I can't wait to try it. 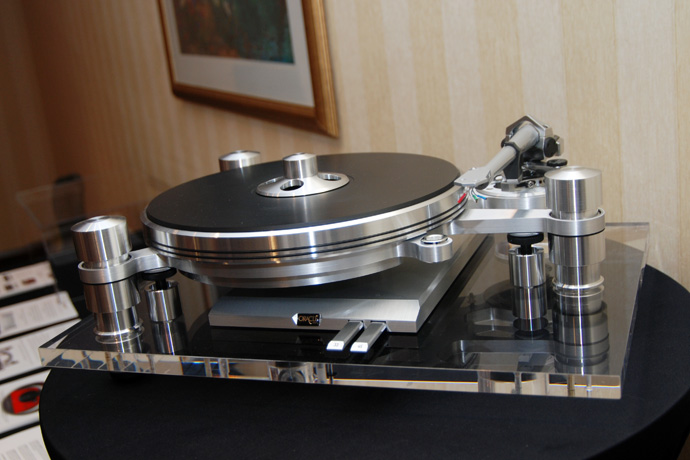 If you're Canadian and even remotely tuned into the audio landscape, you will undoubtedly have heard of Oracle. The three-pillar, suspended Oracle Delphi turntable is an iconic and immediately recognizable product. And with good reason.

A work of art in acrylic and polished aluminum, the Oracle Delphi was first introduced in 1980 and has been consistently and carefully refined over the last 30 years. Now in Mk.VI configuration, the Delphi holds true to its original design, but there are a significant number of refinements lurking under its slinky nightdress. The three pillars that contain the suspension for the subchassis employ seven different materials, each of which damps out a different frequency ranging from sorbothane, which handles the lowest frequencies, to nylon, which damps the highest.

Beside each pillar is what Oracle dubs the Micro Vibration Stabilization System. These billet-aluminum cups hold silicone fluid. A paddle, which is attached to the subchassis, dips down into each MVSS, helping to damp lateral movements that the belt may induce. The Delphi Mk VI retails for $7700 to $9000 without arm, depending on options such as power supply and dustcover.

In further developments, Oracle has released a number of other new products. The company now produces their own cartridge, a high-output moving coil that retails for $1150. 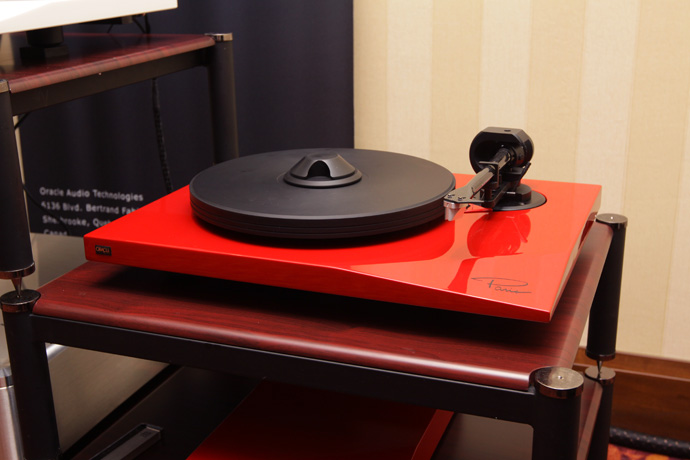 The Oracle Paris turntable is back, in five finishes including a delicious Ducati/Ferrari red, with a rebadged Pro-Ject arm. The arm is modified by Oracle, with a silicone damping trough installed near the arm lift. The Paris sells for $5000 with arm and cartridge. 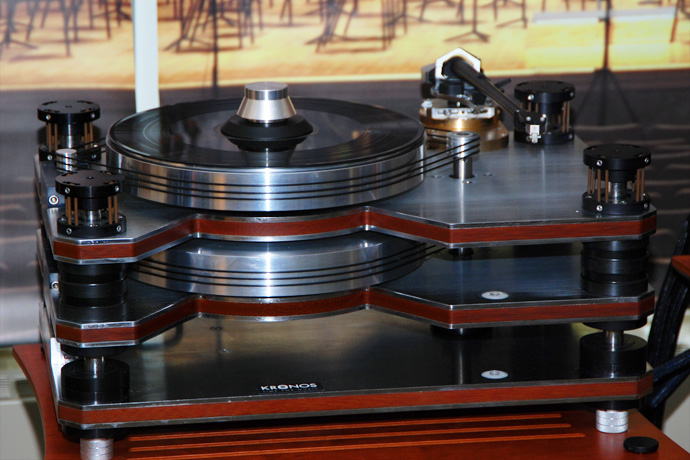 Continuing the theme of over-the-top sculptures in analog art, Fidelio Audio had a new 'table squatting all ominous-like right in the middle of the room. The Kronos turntable (no model number for this product), which retails for $30,000 without arm, looks set to impress. This impressive multi-level structure utilizes two separate platters that rotate in opposite directions, thus counteracting any centrifugal forces and any attendant torque that might otherwise be transferred to the structure. 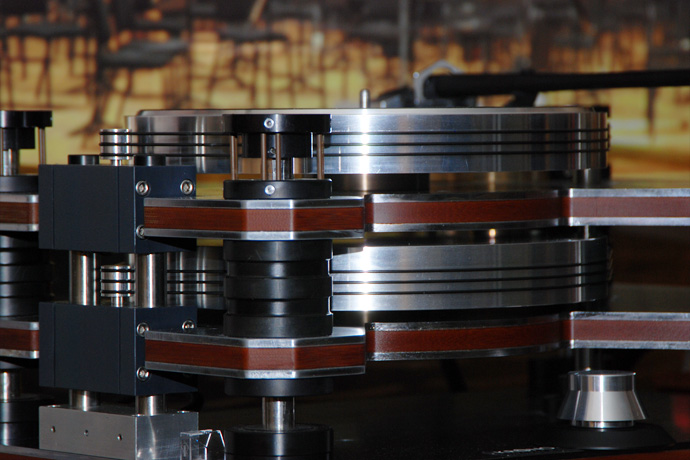 The Kronos features multi-layered everything, and employs a suspension that's silicone-damped. As Fidelio's wont to do, they were demoing the Kronos with one of their own recordings -- Holst's The Planets, arranged for organ and brass, mastered by Bernie Grundman and pressed by RTI. I asked Fidelio's Rene Laflamme to cue up "Mars," and he let loose the dogs of war. Through Sonus Faber Stradivari speakers, an Audio Research Reference 5 preamp, and Audio Research Reference 210 mono amps, the odd combo of organ and horns slammed out with control and an amazing sense of depth. Outstanding! 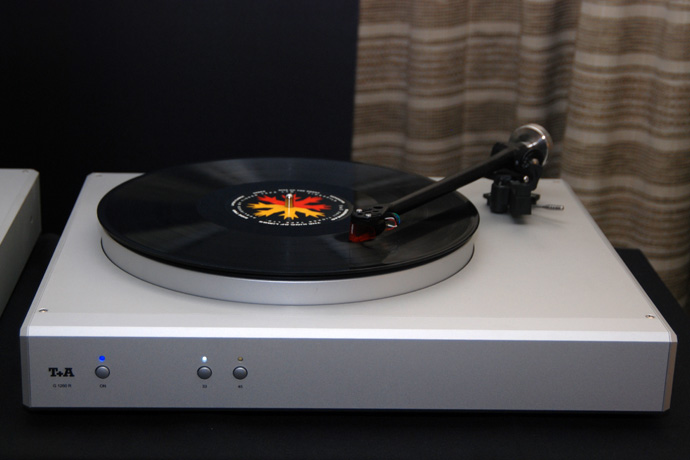 But $30k is car money. What if you're not that well heeled? Nip on over to the T+A room and take a peek at their G1260 R turntable. This made-in-Germany unit features a DSP-controlled motor and an exceptionally inert plinth. Lurking inside that boxy Audi-like carapace is a built-in phono stage -- no guff! The G1260 R features a modified Rega RB301 arm, which sports an Ortofon Bronze cartridge that T+A modifies in-house.

The best part about the T+A G1260 R? It retails for a humane $4300 -- including arm, cartridge and phono stage. It doesn't get much better than that. More to come in Part Two.