The 2019 Rocky Mountain Audio Fest kicked off with a press day on Thursday, September 6, and three days of general admission to follow. I was able to fly up from Los Angeles for only a very abbreviated, roughly six-hour visit, but I was able to see several notable product launches -- although I know I missed a couple of them, too.

This year, the event moved from its longtime home in the Denver Marriott Tech Center hotel to the new Gaylord Rockies Resort & Convention Center near Denver International Airport. The facilities were beautiful, if sprawling, but I thought the rooms were rather small. In a couple of cases -- including the new Revel PerformaBe F226Be, a version of the Performa3 F206 tower speaker upgraded with a beryllium tweeter and other tweaks -- the rooms were so packed with showgoers that I couldn’t even squeeze in to snap a picture.

Here are the new speakers I found at RMAF, with all prices listed in USD. 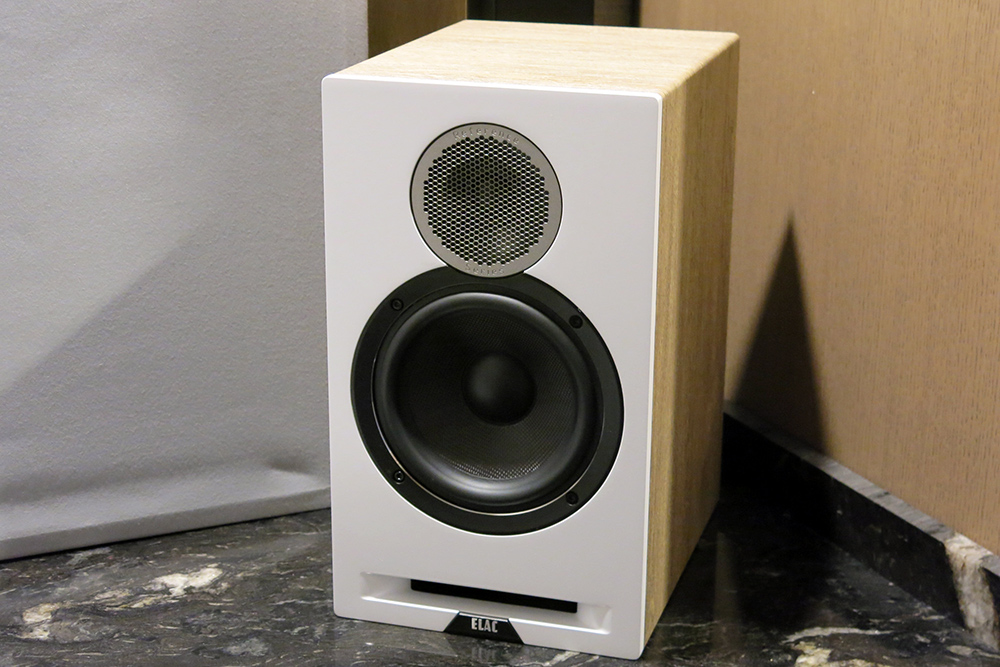 Elac’s Andrew Jones designed the new Debut Reference DBR62 ($500/pair) as an upscale version of the company’s popular Debut 2.0 B6.2 bookshelf speaker, to be sold through select dealers. Although the general configuration is similar to that of the B6.2, the DBR62 features upgraded drivers, a slot port instead of a round port, a new tweeter grille, and vastly more attractive finishes. 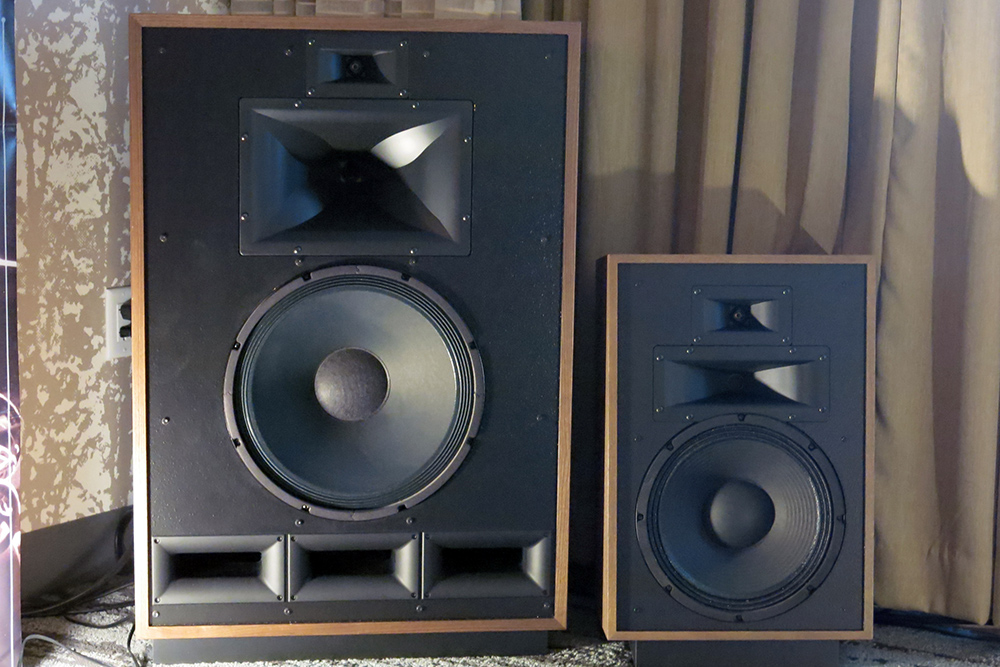 Klipsch’s Cornwall 4 ($5998/pair, left) and Heresy 4 ($2998/pair, right) are updated versions of speakers that originally launched in 1959 and 1957, respectively. Traditionally, the Heresy has been a sealed-box model that’s a little light on the bass. To pump up the bass a bit, Klipsch increased the speaker’s internal volume by making it a little taller, and also added a rear-firing port using similar geometry to the company’s Tractrix midrange and tweeter horns. “Before, you really needed a sub with it,” Klipsch’s Rob Standley told me, “but now it’s 50/50.” The Cornwall 4 substitutes three of the Tractrix ports for its previous slot ports; the advantage of the Tractrix ports is said to be lower port noise. Both models have new tweeters designed for broader dispersion. 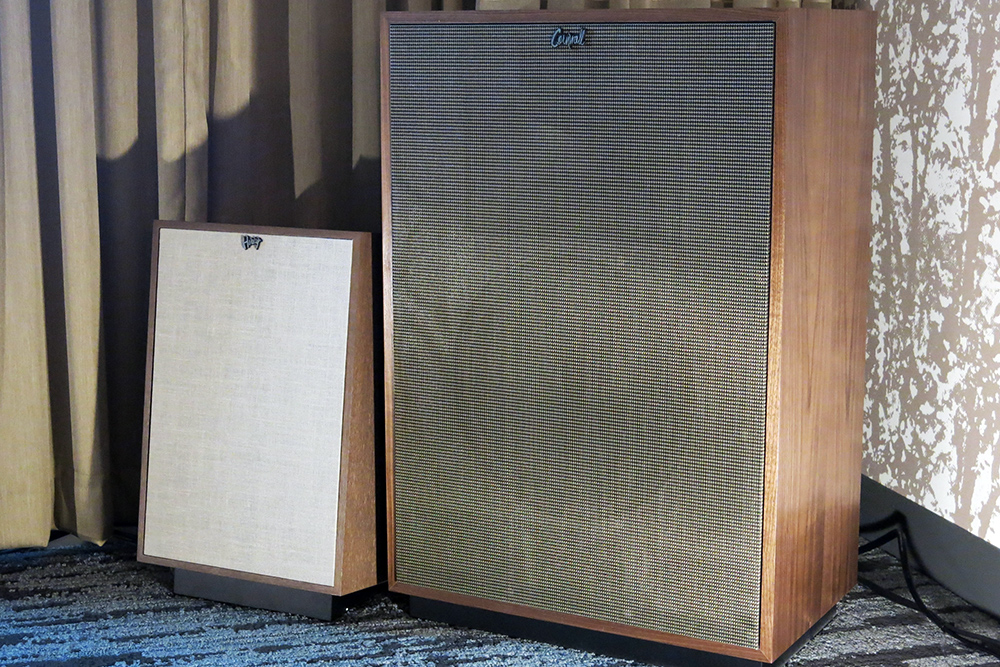 The look of the Cornwall 4 and Heresy 4 has also changed, becoming simultaneously more modern and more retro. The retro part comes from a return to the 1950s-style script logos. The modern part comes from narrower bezels surrounding the grilles, which make the speakers look a little sleeker. 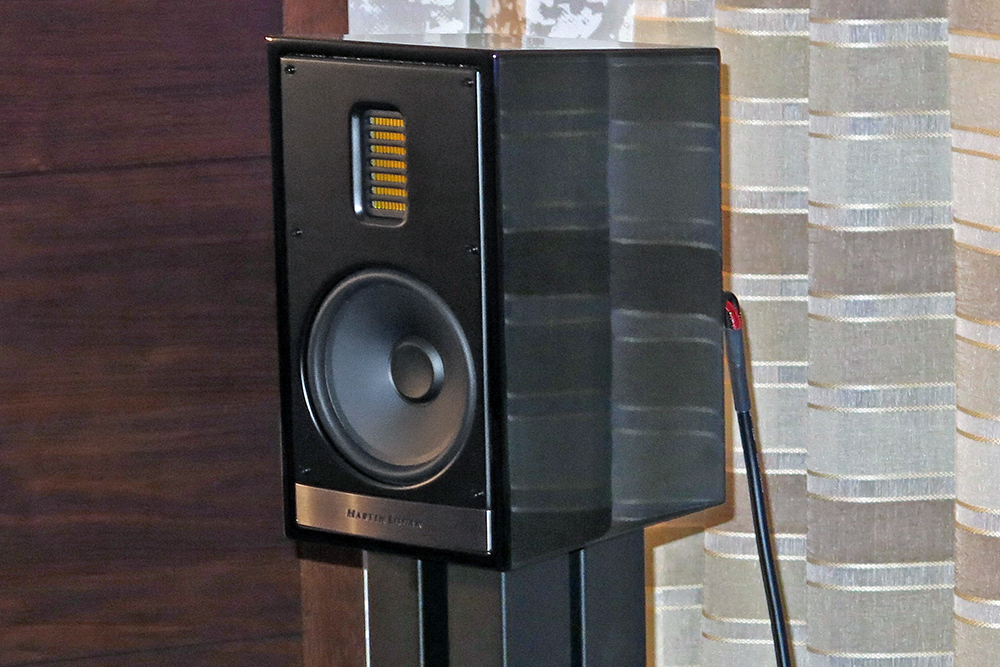 The mild changes to MartinLogan’s Motion speaker line feel more like a refresh than a relaunch. The Motion 35XTi ($1299.98/pair) you see here differs from the original 35XT only in ways that a company rep described to me as “housekeeping”: a new dustcap for the woofer, a new tweeter grille, crossover tweaks, new finishes, and a restyled grille. 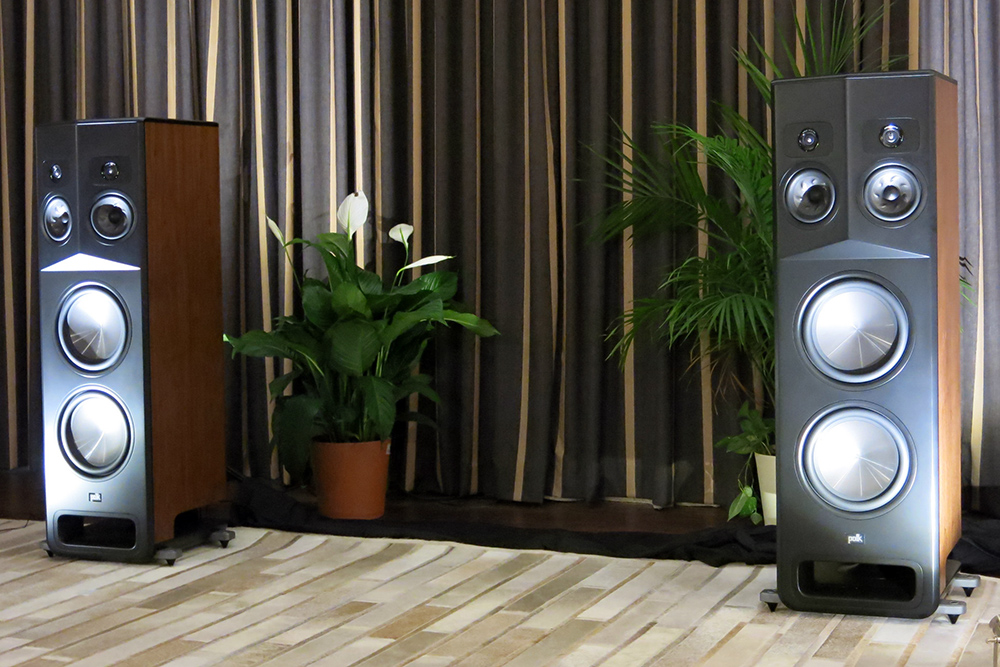 The Polk Audio Legend L800 is the first new speaker since 1997 to use the company’s SDA (Stereo Dimensional Array) technology. Priced at $6000/pair, it was designed by Stu Lumsden, a recently retired Polk engineer who worked on the original SDA models with company founder Matthew Polk. Each speaker has two 10" woofers, and two midrange-tweeter arrays, each with a 4.5" midrange and a 1" tweeter. The inside arrays function as standard stereo speakers, while the outside arrays use filtered and phase-shifted signals from the other channel to acoustically cancel interaural crosstalk (leakage of the left speaker into the right ear and the right speaker into the left ear), which results in a much broader stereo soundstage. A cable connects between the speakers to facilitate this. The Legend line will also offer an additional tower speaker, two bookshelf speakers, a center speaker, and an Atmos-enabled height module, although the L800 is the only model to feature SDA. 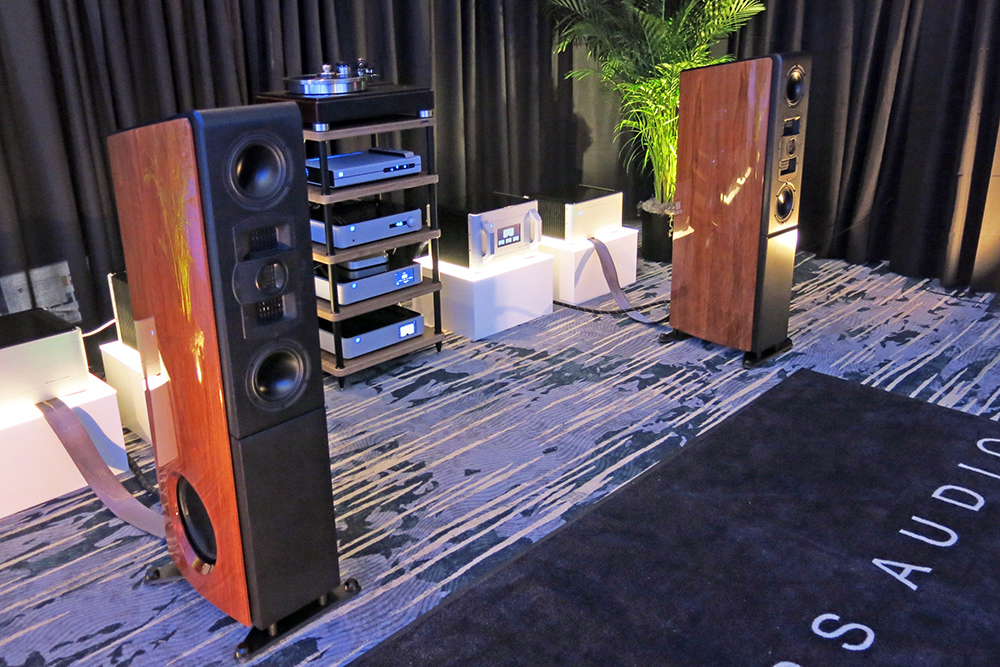 PS Audio’s AN3 will be the company’s first speaker. It’s designed by speaker engineer Chris Brunhaver, based on concepts originated by late Genesis Audio co-founder Arnie Nudell. It’s expected to sell for $15,000 to $20,000/pair when it ships next spring. Interestingly, the speaker’s designed so it can be shipped by FedEx: the side panels pop off and the top section separates from the bottom subwoofer section, which means each speaker can ship in three relatively small boxes. Various colors of grilles and side panels will be available. 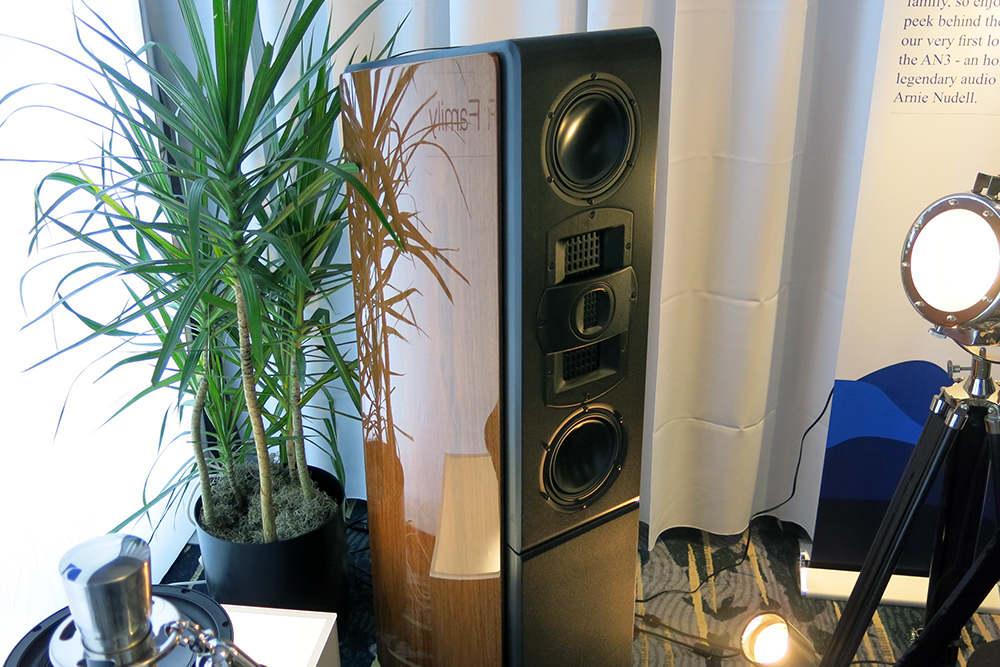 Each AN3 incorporates a built-in subwoofer and a 700W amp in its lower section, with two 5.25" midrange-woofers, a large midrange ribbon, and a ribbon tweeter in the upper section. The AN3 will be the smallest and least expensive model in the new line, with AN1 and AN2 models also planned.