A lousy sleep last night. I rolled into Montreal’s Hotel Bonaventure, which is home to the Montreal Audio Fest (MAF), at around 9 p.m., threw my bags in my room, and hustled to the bar. The lobby bar in the Hotel Bonaventure is a wonderful admixture of recently renovated white paint and neon tastefully clashing with ’70s Moonbase Alpha concrete.

This bar is where the industry folks gather. There’s always a good mix of people to share a beer with. Or two. Or three. So 9 p.m. turned into 1 a.m., and a rusty spike in my head this morning.

But no matter! The Hotel Bonaventure is an absolutely wonderful venue for an audio show, and there are a ton of rooms to investigate -- and lots of new speakers to find. Prices shown in Canadian dollars. 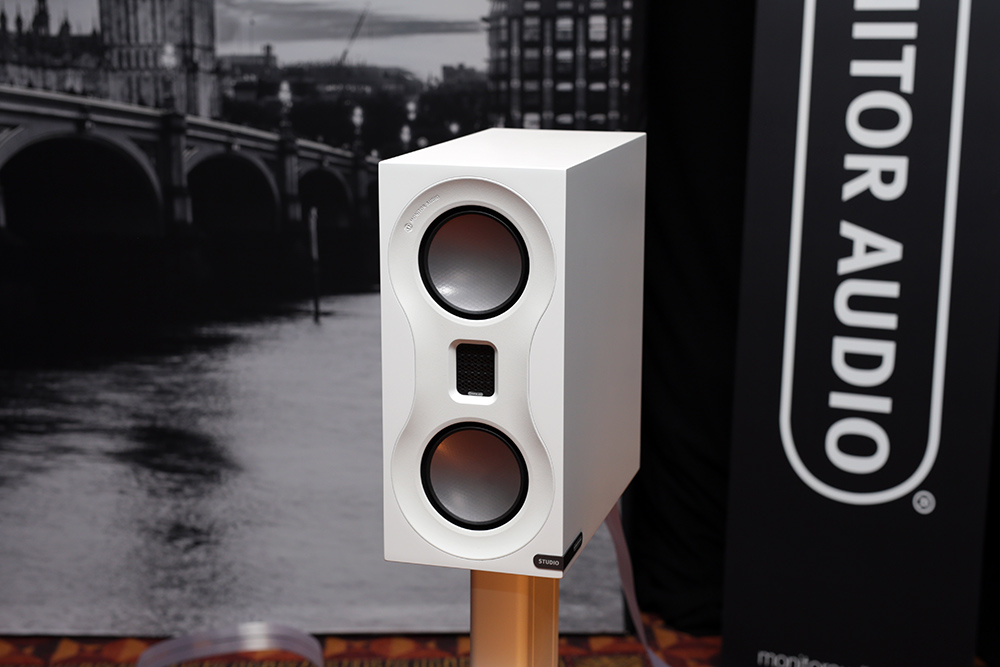 Now this is a swell little speaker. Sometimes you look at a product and can see that it’ll take off and become a modern classic. We’ve seen this sort of action before with KEF’s LS50 -- a buzz develops, and rightfully so, around a reasonably priced, attainable product.

The new Monitor Audio Studio ($1800 per pair), shown here at MAF for the first time, seems poised to become one of those products. The Studio has clean, monochromatic styling and an elegant profile. While the 13"-tall cabinet is well-braced MDF, the drivers actually mount to an aluminum sub baffle. That’s the air-motion transformer (AMT) tweeter from the Platinum series in there, and the dual midrange-woofers employ technologies from the same top-range Monitor Audio line.

The Studios sat atop slick-looking stands that retail for an additional $750 per pair, and they looked well worth the coin. 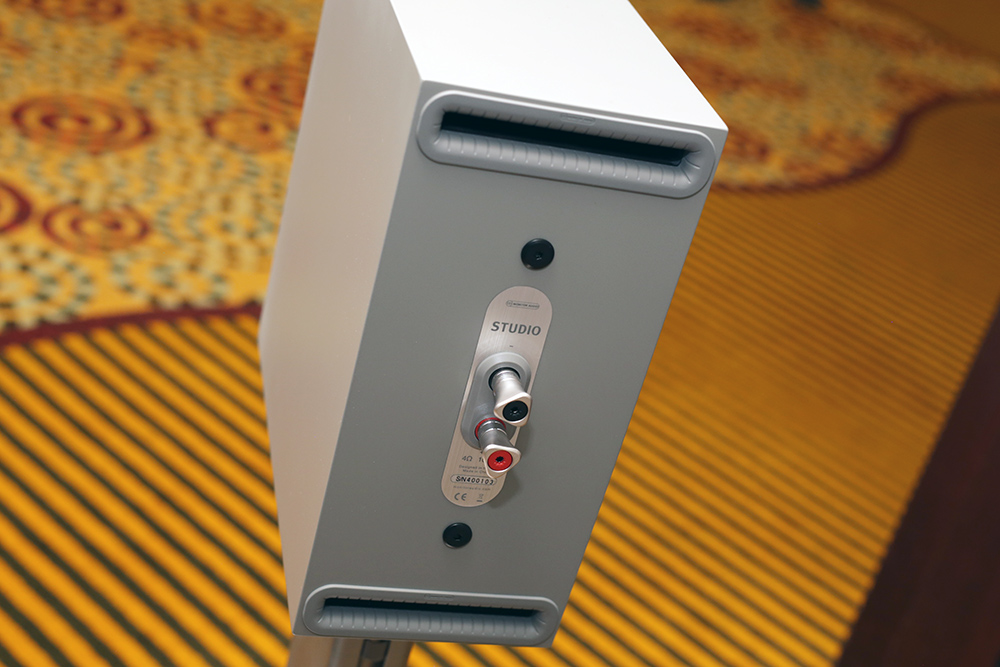 Besides white, the Studio is also available in this natty low-profile gray, as well as black. They’re all matte finishes, which is likely how the company keeps the costs down (high-gloss and real-wood finishes are generally more expensive). The binding posts have a wonderful look and a tactile feel that makes them extremely easy to tighten by hand. I also liked the horizontal, slotted ports. Finally, an interesting aside: Monitor Audio used the Studio name back in the 1980s for its first “high end” speaker. This version looks set to carry that torch forward. 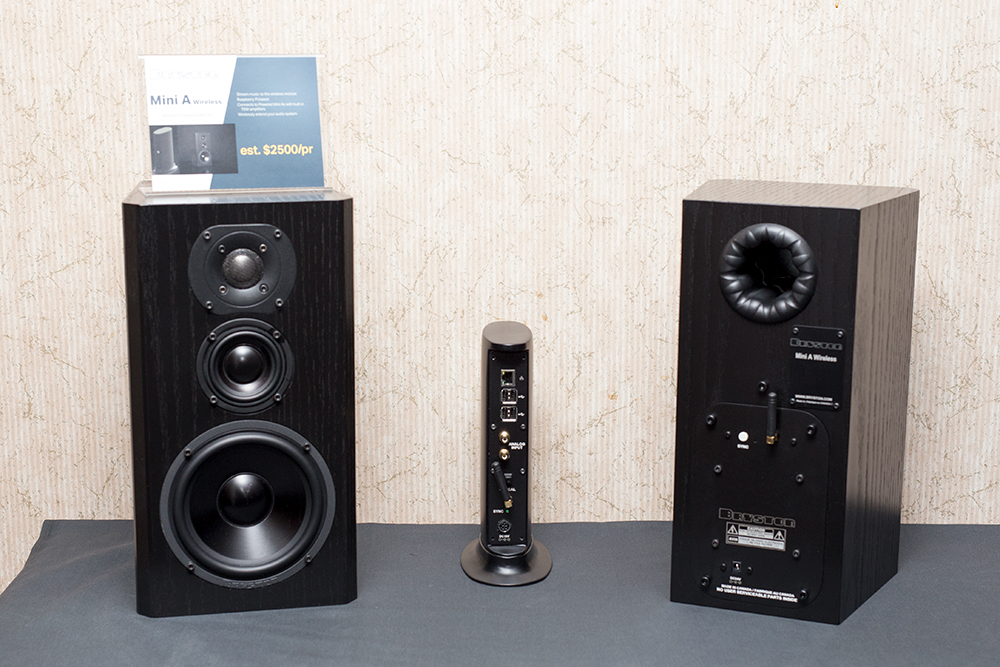 So Bryston makes amps. And passive speakers. Now the company has put them together and added wireless connectivity.

Here you go -- the Bryston Mini A Wireless, which was shown at MAF 2018 for the first time as a static exhibit. The accompanying base station incorporates a Raspberry Pi mini-computer, so the Mini A Wireless promises flexibility and compatibility far into the future. Based on -- obviously -- the company’s existing Mini A passive speaker, the Wireless contains a 75W amplifier and features Ethernet, USB, and line-level inputs. This is essentially a complete audio system for $2500 per pair, which seems very reasonable. 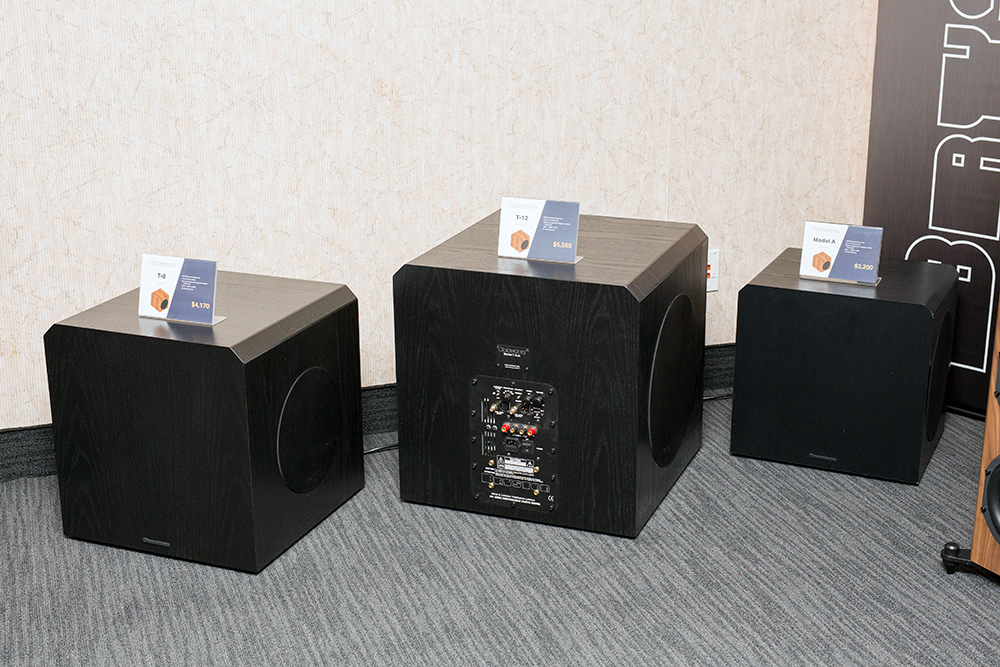 Also on static display, squatting troll-like in the corner of the Bryston room, were new Mama, Papa, and Baby Bear subwoofers -- the first ever from the brand. The T-8 (left), T-10 (center), and Model A (right) subs feature dual bipole woofers sized for the products’ names. Here’s the breakdown: Starting with big-gun Papa Bear, the $5565 T-12 is loaded with two 12" drivers and propelled by a 600W amp, which nets 18Hz extension. Baby Bear is the Model A, again with two drivers, this time 8" each. With a 400W amp, the Model A can chug down to 25Hz, which is good dosage for $2200. The just right Mama Bear is the $4170 T-8 featuring two 8" drivers driven by a 600W amp, and it digs down to 25Hz. 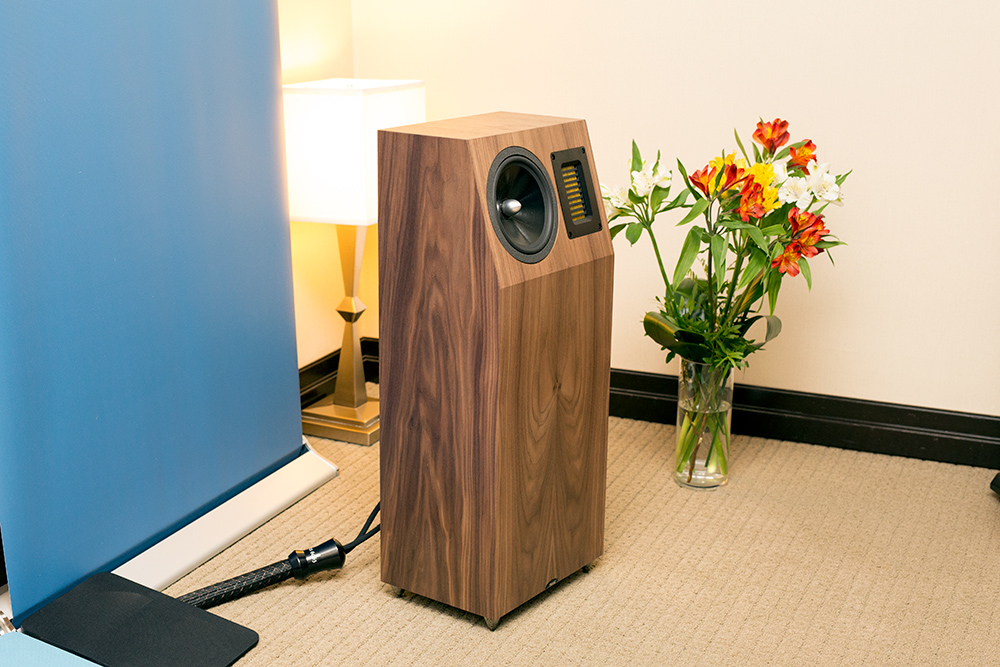 Did you know that Neat, the English speaker company from England, used to be called North East Audio Traders? Neither did I.

As of recently, Neat has begun shipping the Iota Xplorer, a compact but ambitious two-and-a-half-way speaker that contains some serious forward-think. The mirror-imaged horizontally oriented speakers employ a 6.6" midrange-woofer and an AMT tweeter, along with downward-firing woofers in an isobaric configuration. Adding to the squat little Iota Xplorer’s cool factor is the beautiful, sophisticated book-matched walnut veneer.

While our fast pace necessitated by the new-product safari doesn’t tend to give us a lot of time to listen on day one of a show, it didn’t take more than few seconds to get hold of the snappy dynamics and quick grasp that the Iota Xplorers exerted over the music. This is a lot of speaker for $6000 per pair. 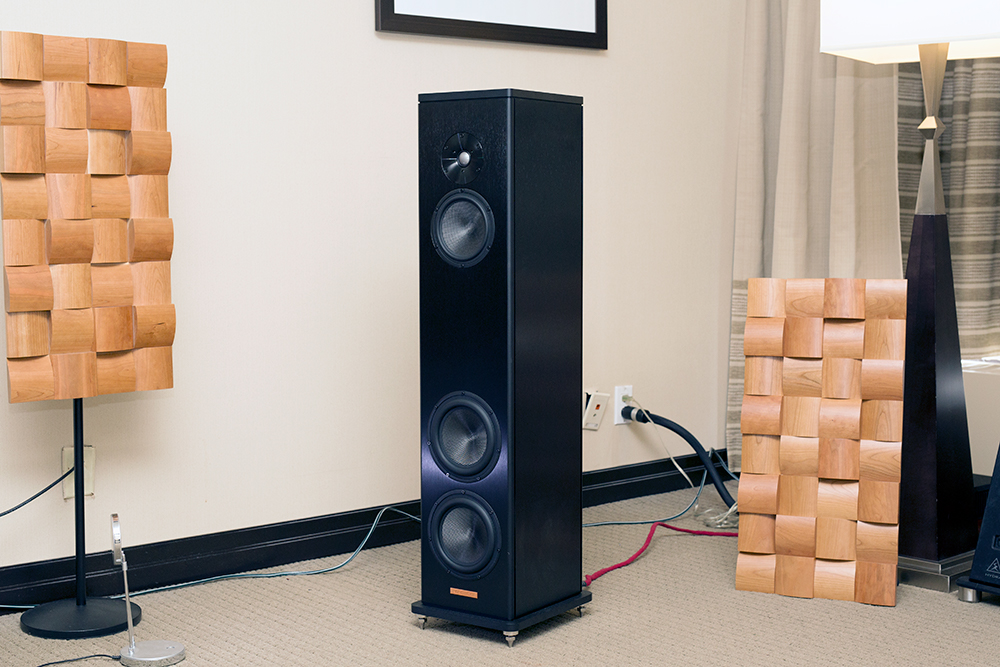 Back in December, Doug Schneider toured the Magico factory in California and got a sneak peek at the new A3 speaker, which he wrote about on this site. It turns out that the Montreal Audio Fest was near-as-dammit the first public appearance of this ambitious “entry level” speaker from Magico.

As with all Magico speakers, the A3 is machined from solid aluminum, with extensive cross bracing and separate sub-enclosures for the driver sets. The entire enclosure is brushed and anodized a tasteful black. There’s an utterly dead, inert feel to Magico speakers -- they make it clear, in certain terms, that they’re made from metal, and the impression of density makes them seem heavier than their claimed 110-pound weight.

Up to now, Magicos have seemed like lottery-win speakers, the price of admission beyond what the average middle-class audiophile can afford without dipping into the line of credit. The A3s change that -- their $12,700-per pair price tag ($9800 USD per pair) isn’t chump change, but it’s no longer totally out of reach.

Take the Magico A3, shift the decimal point one place to the left, and divide by three. Now we’re talking. About Elac, specifically. I plonked my tired ass down in a sacked-out but comfortable hotel chair in the Elac room and turned my attention to a pair of modest but well-finished bookshelf speakers.

The system was slamming out a John Campbell track at elevated levels, and it sounded just great. Rich, textured, wet, and controlled -- everything I need for musical enjoyment. Imagine my surprise when Elac’s Kathleen Thomas informed me that the Elac Debut 2.0 B6.2 retails for a ludicrous $449 per pair. Driven by a tiny Elac EA101EQ-G integrated amplifier, this system punched so far above its weight class that it’s just not funny. If you’re even remotely cost constrained, discount these speakers at your peril.