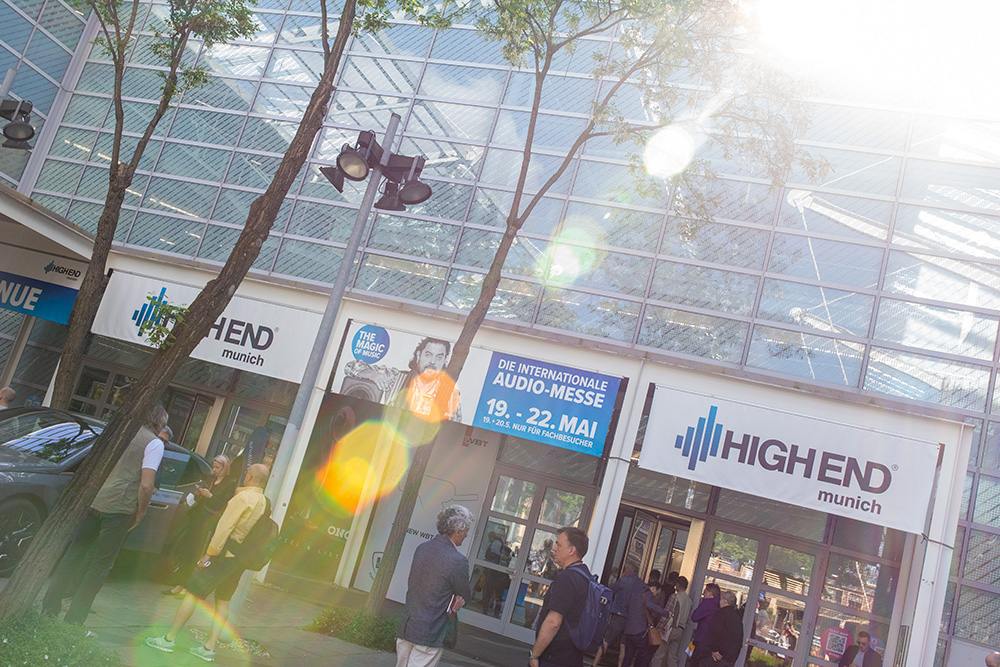 If someone asked me a year ago if High End 2022 could be successful, I likely would’ve said, “I have no idea if it will even go on, let alone be a success.”

Last May we were still deep into the pandemic, and hi-fi shows were looking like they were going to become a thing of the past. I say that about the shows because hi-fi products from all the established brands were selling extremely well even with no shows around, probably because the people who still had jobs needed something to spend their money on during the lockdowns. But when 2022 rolled around, hi-fi shows seemed to be a thing again. I was at the Florida Audio Expo in February and thought it was as good as the last time it was held, which was in February 2020. Montreal Audiofest, which was in March, was good as well. Although I wasn’t at AXPONA, which was in April in Chicago, from what I heard, exhibitors and attendees were both pleased with the show’s outcome.

As a result, when I landed in Munich for High End 2022, I had high hopes—and I wasn’t let down, because I saw so many new products, it was as if manufacturers were waiting for this show to unveil what couldn’t be unveiled for the last two years. Without further ado, then, here are some of the products I saw on the first day of High End 2022, with all prices in euros. 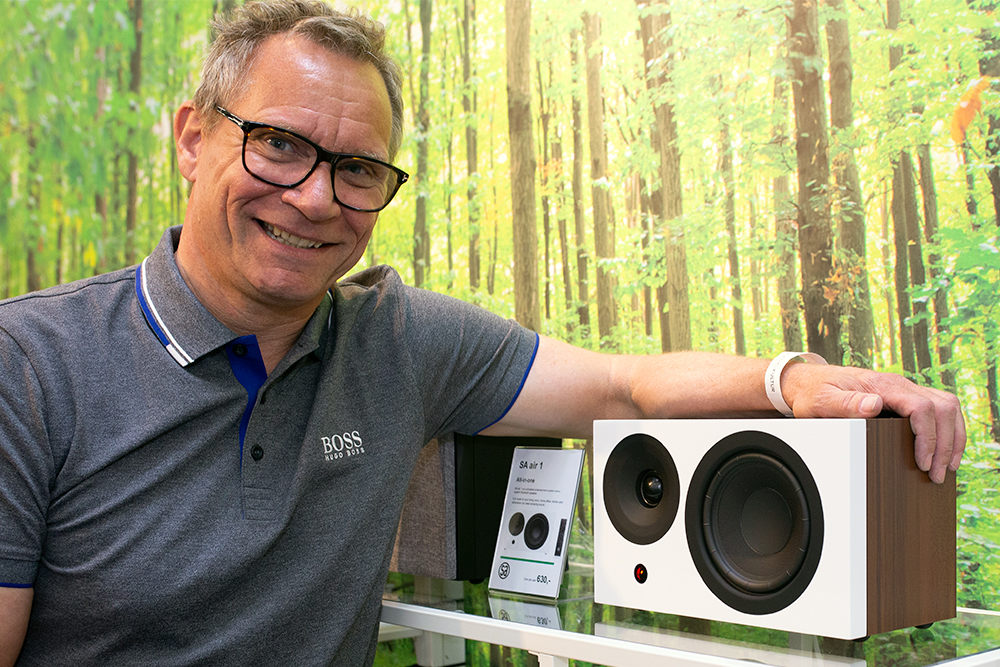 I’m going to begin with something a little different than we usually cover, the System Audio SA Air 1, which is being billed by company founder Ole Witthøft (in photo) as an “audiophile Bluetooth speaker. Priced at €630, the SA Air 1 is a single two-way speaker that measures about 6.7″H × 11.6″W × 6.4″D. Its 1″ soft-dome tweeter and 5.5″ midrange-woofer are powered by 90W “digital amplifier units with built-in 32-bit floating point processors that deliver high-quality sound in high resolution and without loss.” According to System Audio, the use of amplifiers that powerful and with that much digital processing power “is unique for speakers in this category.” What’s also different is that the speaker is wider than it is tall, and with the tweeter mounted to the left of the midrange-woofer instead of above it like you see in most speakers. The company claims the SA Air 1 can play from 45Hz to 25kHz, within a +/-3dB frequency-response window, which is quite low in the bass and very high in the highs. 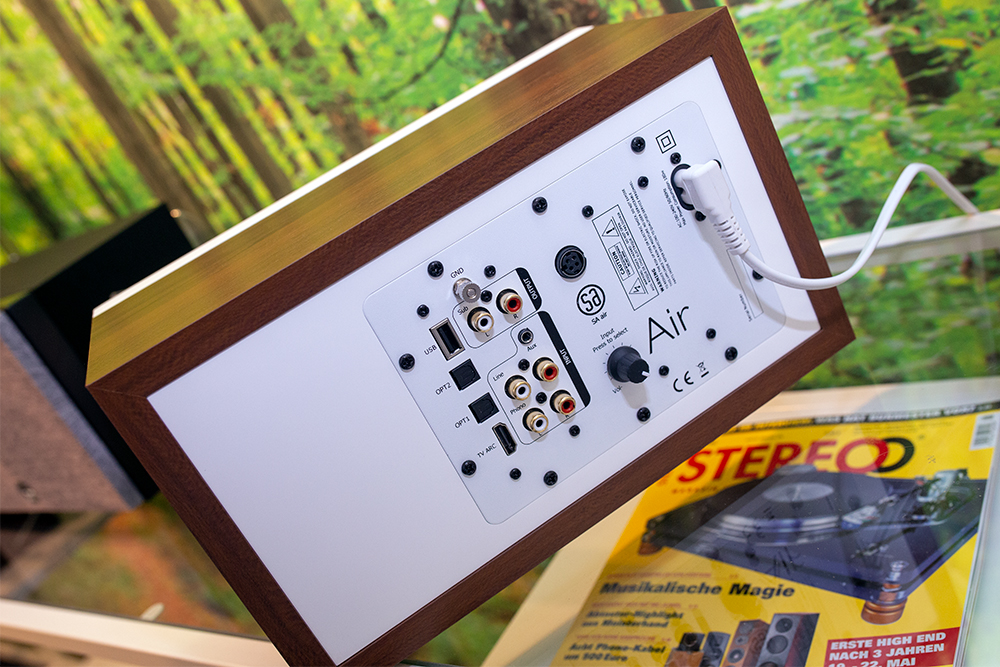 Inputs on the SA Air 1’s rear panel include one pair of RCA analog, one pair of RCA phono (there’s a moving-magnet phono stage built in), one 3.5mm analog, two TosLink digital, and one HDMI ARC (for TV hookup). Of course, wireless connectivity via Bluetooth is also supported. A USB input is also on the rear, but that appears to be there to update the SA Air 1’s software and to charge a device, not to connect a music source. But a pair of left and right subwoofer outputs are also included, should the user want more bass. There’s also a remote control, which is necessary because that’s primarily how you control volume (though there is a small volume knob on the back), as well as the only way to select an input. For someone who wants a compact, high-quality sound source in the kitchen or in, say, a small room elsewhere in the home, the SA Air 1 could be the ticket. 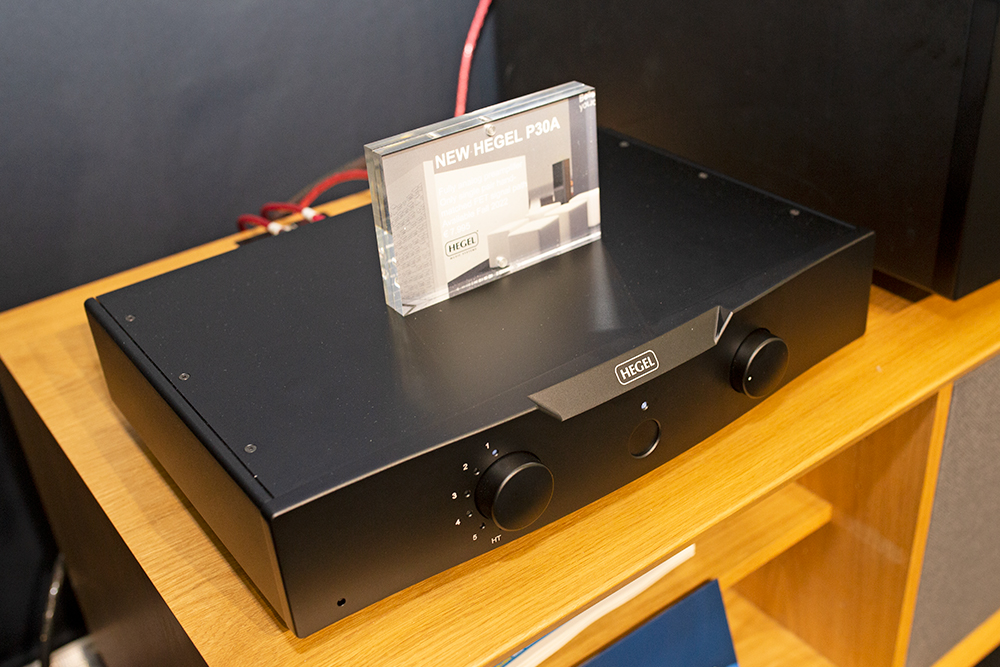 You’d be forgiven for thinking that Norway’s Hegel Music Systems only makes integrated amplifiers, not separate preamplifiers and power amplifiers. That’s because the company hasn’t put much focus on its separates for a long time. But for 2022, Hegel has refreshed the cosmetics and circuitry for its P30 standalone preamplifier, which is now called the P30A and carries the nickname “the Conductor,” and the H30 power amplifier, now called the H30A, or “the Orchestra.” These are the company’s flagship separates and are respectively priced at €7995 and €17,995. Both incorporate the company’s patented SoundEngine technology, which uses a feedforward, as opposed to feedback, circuit to reduce various types of distortion. 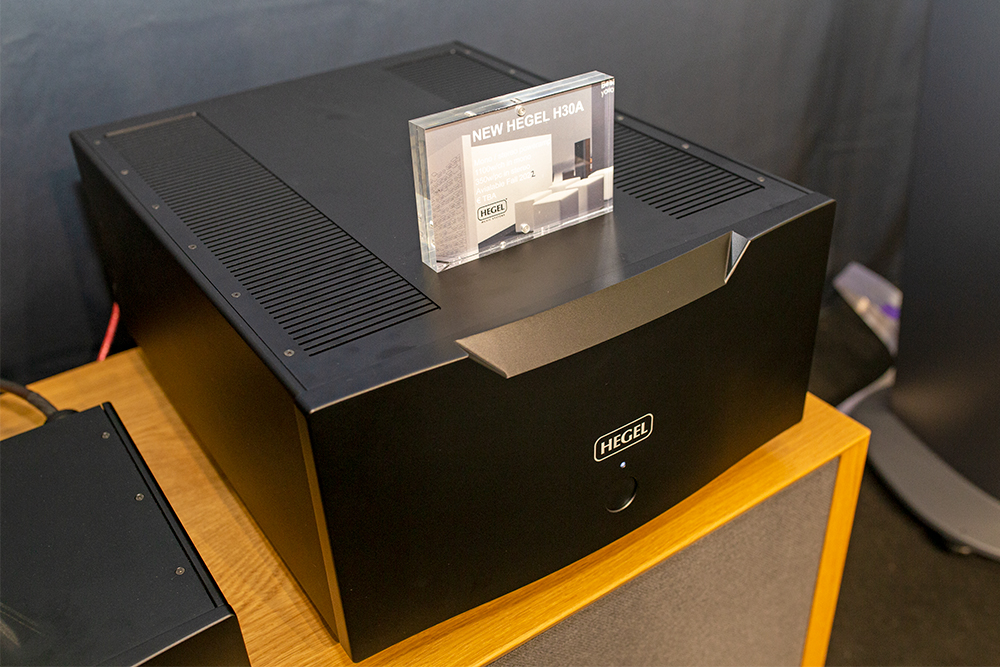 Hegel’s H30A is a little unusual in that it has left- and right-channel inputs, so it can be used as a stereo amp, but it was really designed as a monoblock. Used as a monoblock, the H30A is, in Hegel’s words, an “absolute powerhouse of an amplifier” because it’s said to be able to output 1100W into 8 ohms and remain stable down to 1 ohm. To achieve that kind of output power, the H30A uses 56 output transistors in combination with two 1000VA power transformers and 270,000μF of power-supply capacitance. The H30A should be able to power pretty much any loudspeaker in existence. 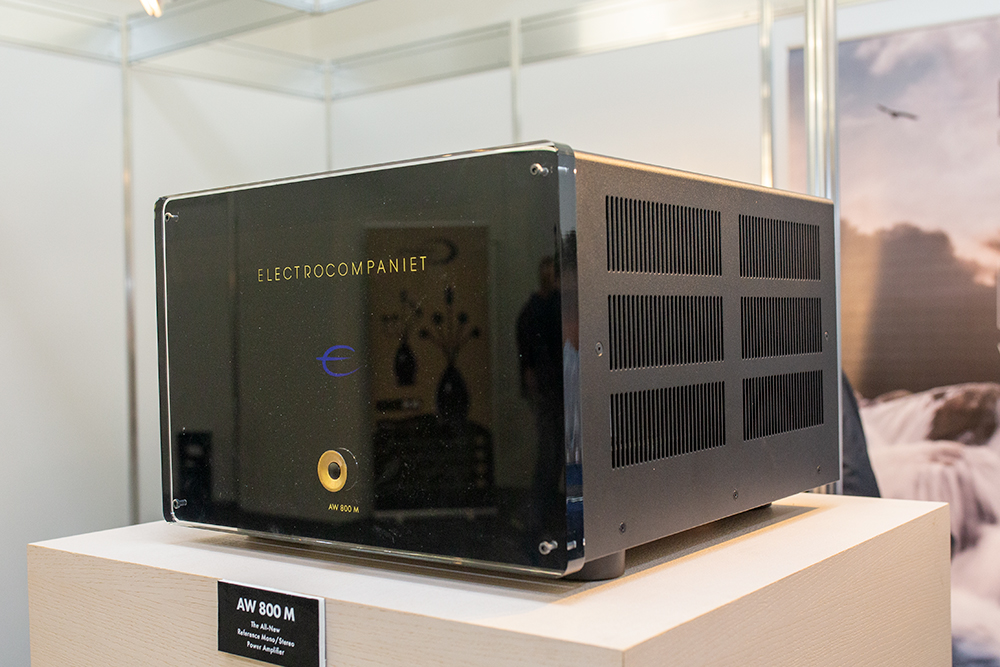 Hegel isn’t the only Norwegian company with a new powerhouse power amplifier. Electrocompaniet, which was founded in Norway in 1973, showed the new AW 800 M power amplifier, which costs €24,000 and is now the company’s flagship amplifier. This amp uses 32 output transistors and has 210,000μF of power-supply capacitance. 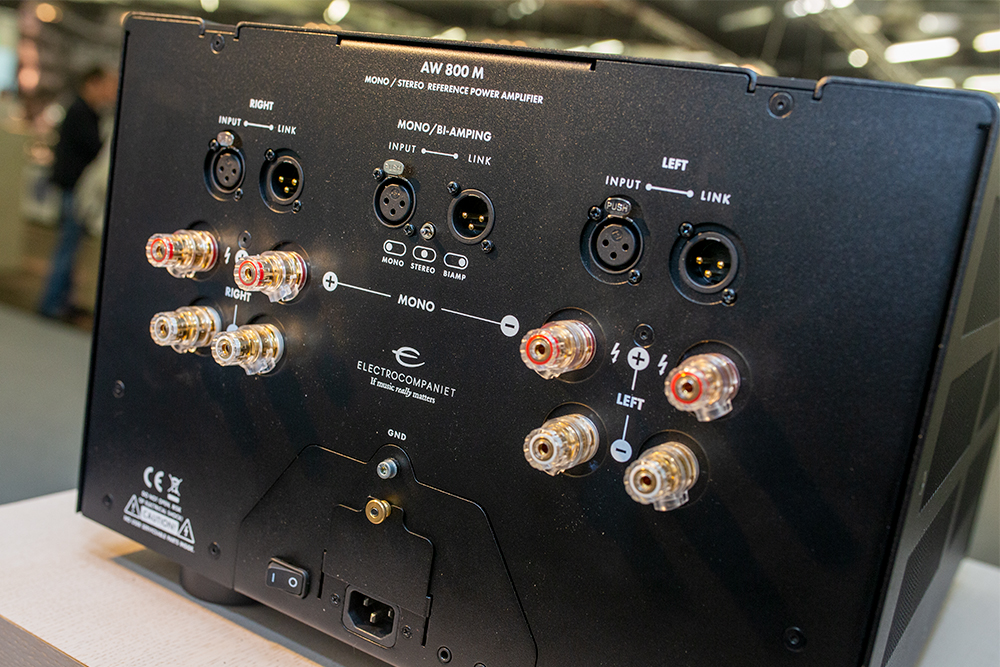 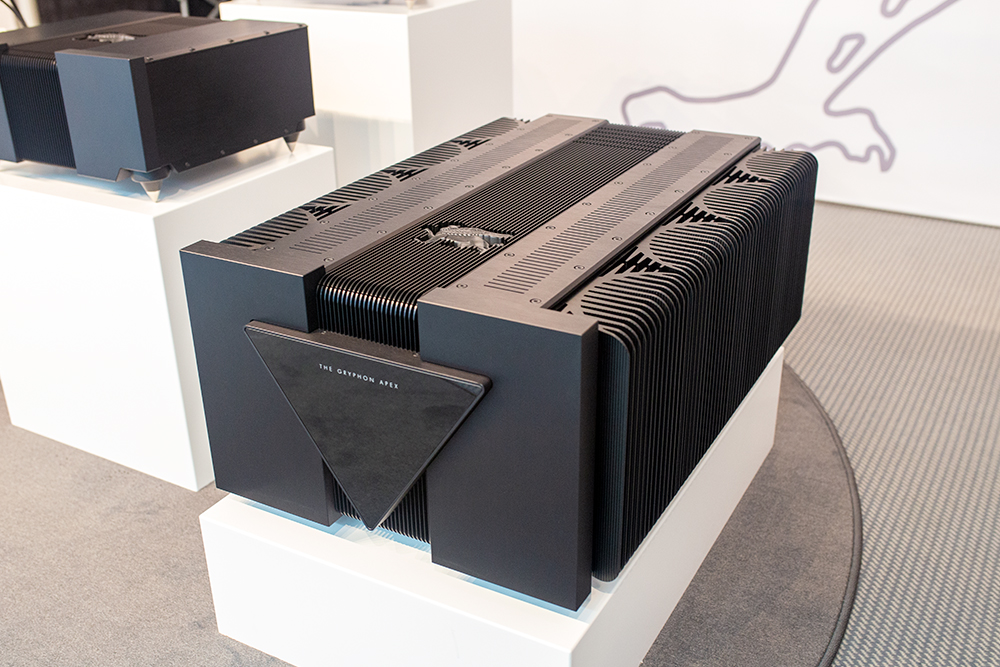 Since I’m talking about powerful amplifiers from Scandinavia, I would be remiss not to bring up Gryphon Audio Designs, which is based in Denmark. Gryphon Audio Designs was founded in 1985 by Flemming E. Rasmussen. Since then, it has established a stellar reputation for producing statement-level hi-fi products of all types—power amplifiers, preamplifiers, integrated amplifiers, speakers, DACs, CD players, and even cables—of the highest quality. Because of that focus on quality, Gryphon products typically cost a lot. Furthermore, Gryphon doesn’t go for small and convenient—the products are usually large and heavy. But Gryphon has adherents all over the world who swear by the brand—and it’s not hard to see why. 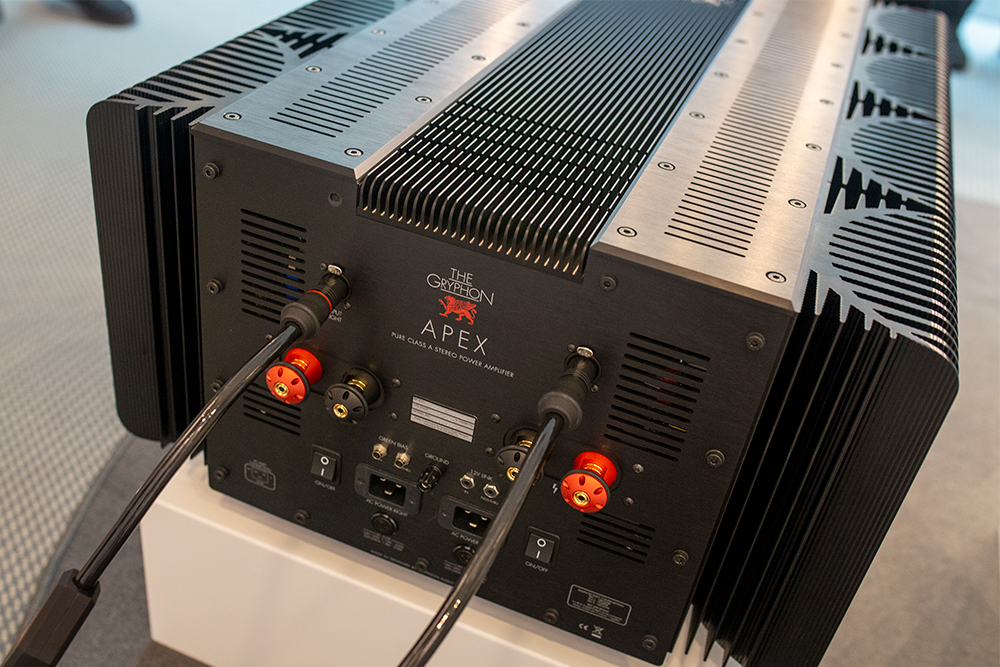 Both models were announced at the beginning of this year, and Jeff Fritz has reviewed the Apex Stereo already on SoundStage! Ultra, so if you want a lot of details on it, hop over there. But to summarize some key details here, the Apex Stereo and Mono amplifiers both measure 23.5″W × 14.6″H × 35.9″D and weigh a whopping 450 pounds, making the Apex Stereo not only the largest amplifier we’ve ever reviewed, but the heaviest as well. Jeff found the Apex Stereo difficult to get into his top-floor listening room, but thankfully the crate it was packaged in allowed for easy deployment once positioned in the room (see the review).

The Apexes are pure class-A designs, meaning the positive and negative output transistors are on all the time, so they can get quite hot compared to traditional class-AB designs. It also means that the power output isn’t as high as commensurately sized class-AB designs. But for pure-class-A designs, the Apexes generate a lot of juice and should be able to drive any loudspeaker on the planet—even the nastiest ones. The Apex Stereo is said to output 210Wpc into 8 ohms, 420Wpc into 4 ohms, 800Wpc into 2 ohms, or 1490Wpc into 1 ohm. The Apex Mono is claimed to output 225W into 8 ohms, 450W into 4 ohms, 880W into 2 ohms, or 1690W into 1 ohm. If you don’t mind the size, weight, and price, the Apexes are probably the ultimate statements in pure-class-A designs on the market today. 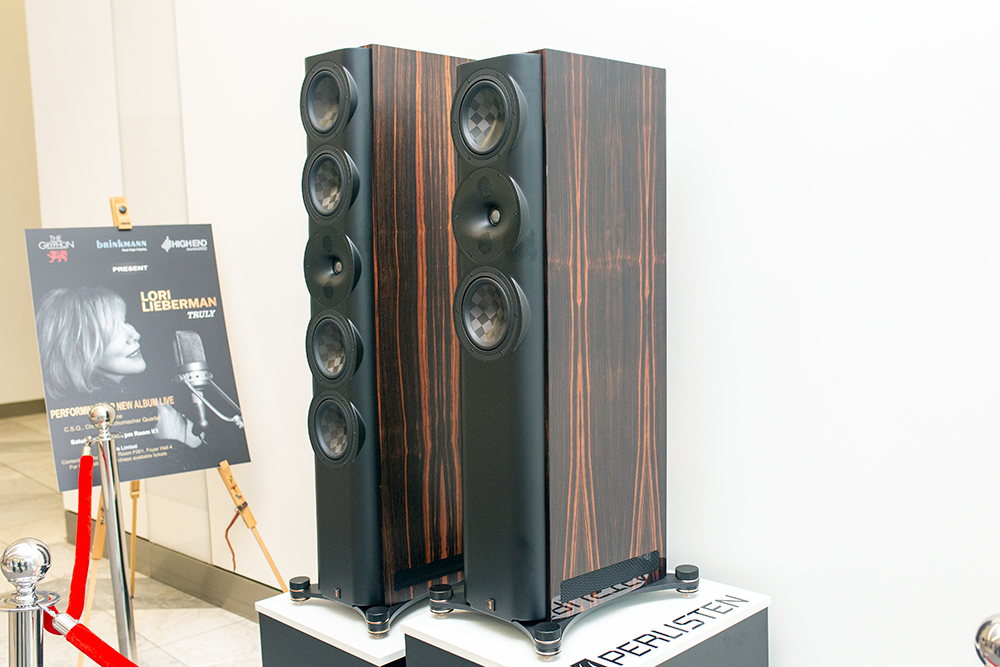 It’s fitting that I end this first coverage article the way I started it—with a loudspeaker. This one is more traditional in that it is meant to be used in pairs and you have to add your own amplifier.

Perlisten Audio showed the new S5t loudspeaker, which is being billed as “a slightly smaller version of the company’s flagship S7t” (the S5t is in front in the above photo, while the S7t is behind it). It’s priced from €13,990 to €15,990 per pair, depending on finish. According to a press release sent a day before High End 2022 began, the “three-way S5t features Perlisten Audio’s proprietary Directivity Pattern Control (DPC) waveguide, which is centered by three 28mm ‘beamforming’ tweeter and midranges to accurately control vertical and horizontal dispersion. A beryllium tweeter with expanded bandwidth to 40kHz and a rear absorption chamber reduce internal reflections to the bare minimum.” 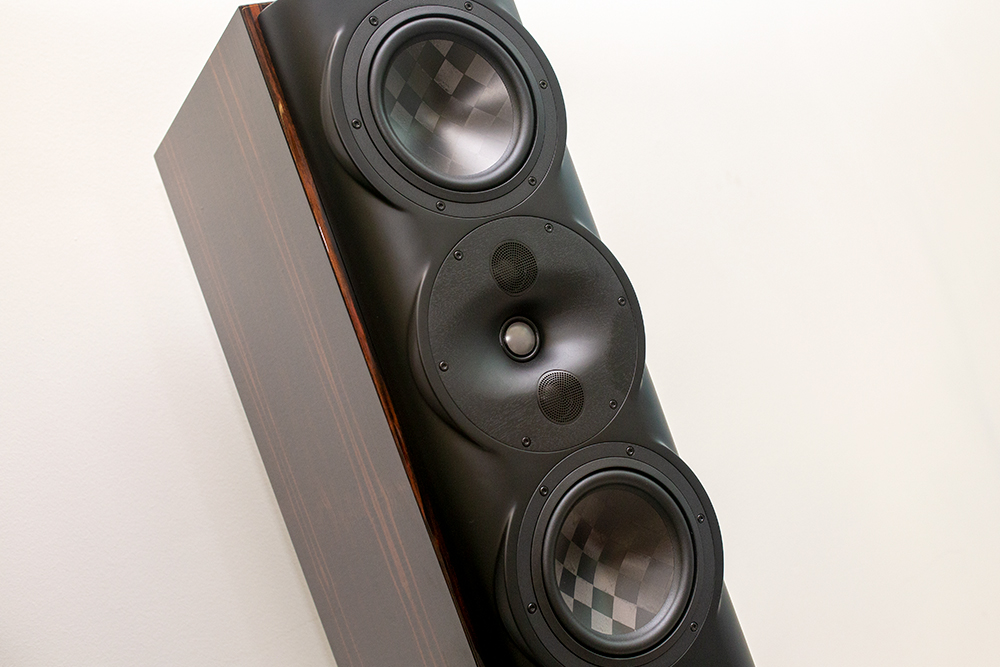 Vertically flanking the three drivers in the DPC waveguide are “two 180mm TeXtreme® woofers, featuring carbon fiber cones that are up to 30% lighter than standard carbon fiber while increasing the strength through the stacking of multiple layers.” The S5t was designed with the goal of “rendering music and movie soundtracks as accurate representations of the musicians’ and engineer’s intentions,” so something it must do is play loud and remain clean. As a result, the company claims less than 0.5% distortion from the S5t at “90dB listening levels,” as well as peak output capability of 114.3dB, which, in case you don’t know, is loud enough to make you go deaf if you listen for long enough.

Perlisten Audio has made a big splash in hi-fi and home theater in the last couple of years by releasing a steady stream of innovative, high-quality loudspeakers. The S5t appears to be another example. In fact, we’ve been so impressed by what Perlisten has been releasing that editor-in-chief Jeff Fritz conducted a SoundStage! Talks interview with CEO Dan Roemer in April that you can find on our YouTube channel—we encourage you to watch it to learn more.