The final day of High End 2022 was much like the first few: lots of new products, some of them very cool. In fact, I came to the realization that we would only cover a fraction of what was on display in Germany—I regret that we’ll definitely miss some relevant products. One thing is for sure, though: customers have some wonderful stereo components to choose from when shopping for a new audio system. Prices below in US dollars or euros. 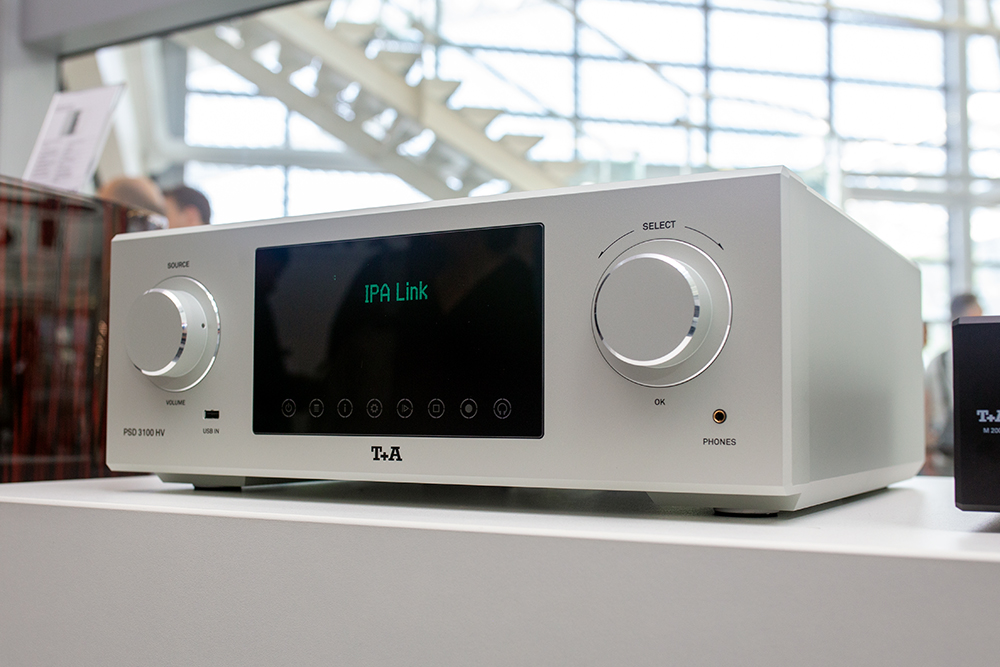 The T+A PSD 3100 HV preamplifier and streaming DAC seemingly does everything a product of its type could possibly do, and then some. And as an HV-class component, it’s built like a tank—the T+A way. The T+A’s specs are impressive, too: The PSD 3100 HV will accept DSD512 through a bespoke single-bit architecture, as well as PCM up to 768kHz. Multiple digital filter options are available, including T+A’s proprietary Bezier filters. 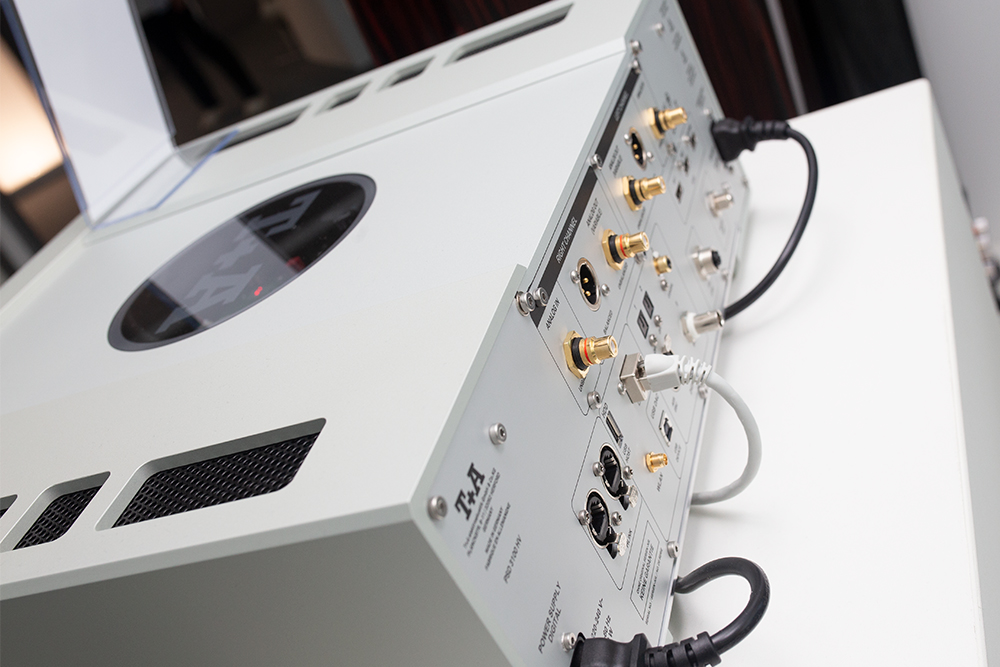 Inputs on the PSD 3100 HV’s rear panel include AES/EBU, BNC, coax, TosLink, USB, and HDMI, among others. The T+A-created streaming client supports Qobuz, Tidal, and Deezer, with more to follow, according to a T+A representative. The PSD 3100 HV will also accept DSD256 via streaming—perhaps the first product of its type to do so. The price is not definitively set at this time, but is estimated to be around $22,000. 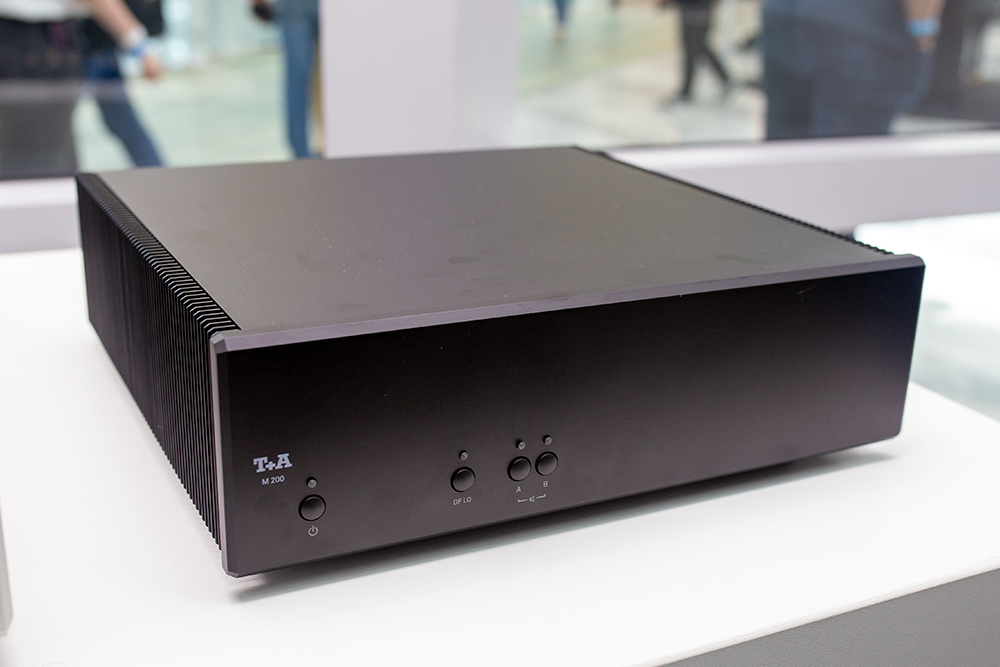 T+A also showed the new M200 mono power amplifier. This amp is rated to produce 210W into 8 ohms or 420W into 4 ohms. The signal-to-noise ratio is specified as 113dB with 0.002% distortion. The damping factor is said to be 800, and the frequency response is specified to be 1Hz to 60kHz (-3dB). The small form factor of the M200 would make insertion into tight spaces quite easy while still providing ample power and good load-driving capability for most loudspeakers. The price is $4900 each. 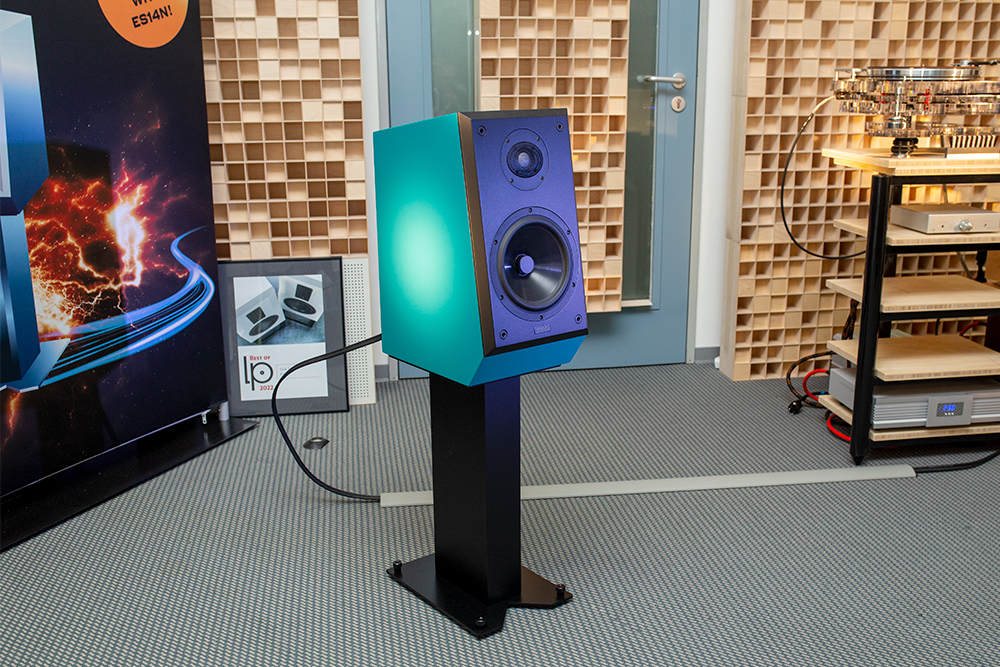 The new Epos ES14N loudspeaker is a reflex-loaded standmount design with a large 7″ woofer mated to a 28mm tweeter with a dome made from an aluminum-ceramic compound. The available finishes are Walnut, White Semi-Matte, and Black Semi-Matte. The Epos ES14N is rated to play down to 40Hz (-6dB), which might not seem that deep, but the pair sounded really robust in the low end in the room they were playing in. The design of the ES14N is by German firm FinkTeam, which is headed by respected designer Karl-Heinz Fink. The price for the ES14N is €4600 per pair. 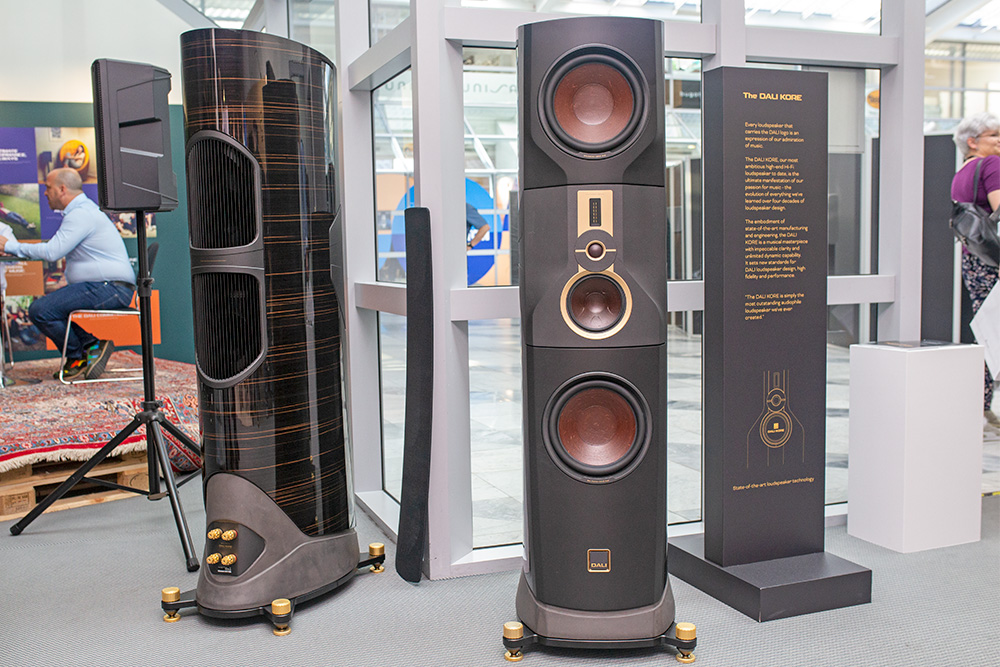 The DALI Kore is the new flagship loudspeaker from the brand. It is a massive effort with tons of technology introduced by DALI, and is made entirely in Denmark. The driver complement includes two 11.5″ woofers, a 7″ midrange, a 1.4″ soft-dome tweeter, and a 2.2″ ribbon supertweeter. All the drivers are bespoke DALI designs. The cabinet is constructed of a combination of birch ply, aluminum, and resin. The wood elements are finished in what’s called Gloss Lacquer Ammara Ebony—the only finish for the loudspeaker—while a textured finish was chosen for the aluminum structural parts. Frequency response is said to be 26Hz to 34kHz. Recommended amplifier power is up to a staggering 1500W! The price is €80,000 per pair. 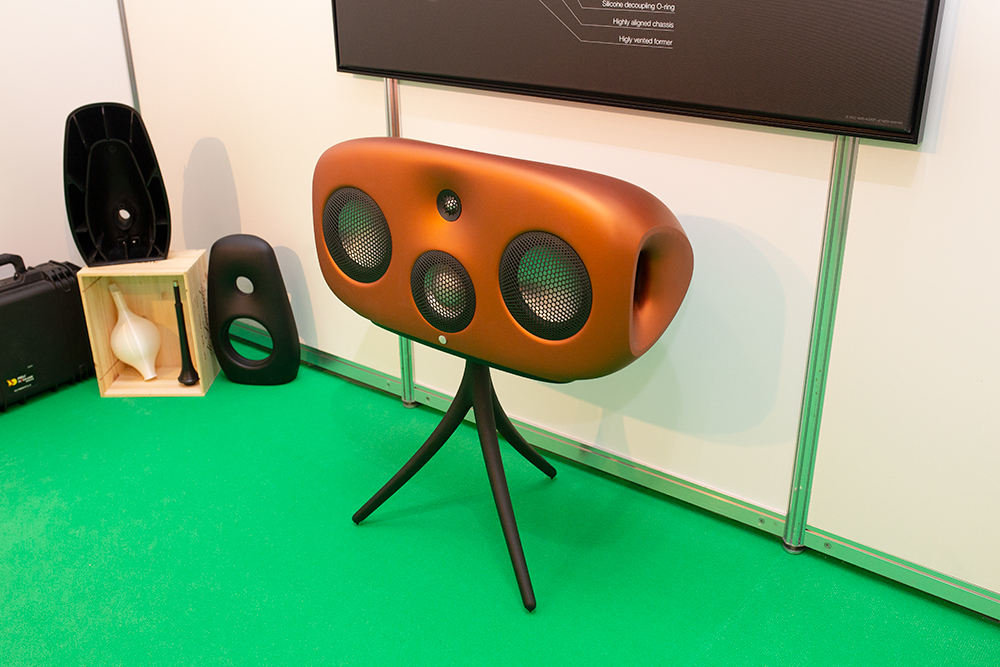 Vivid Audio introduced the Kaya C35 center-channel loudspeaker ($9000). It is a three-way, four-driver speaker that uses the company’s D26 tweeter, C100 midrange, and C125 bass drivers (two). The stand is sold separately ($1500). The cabinet is glass fiber with a Soric core, like the rest of the Kaya range. Sonically, the Kaya C35 will mate with Kaya speakers, but it’s also said to provide a correct tonal match for the company’s Giya-series speakers. The Kaya C35 will be available in the August/September timeframe. 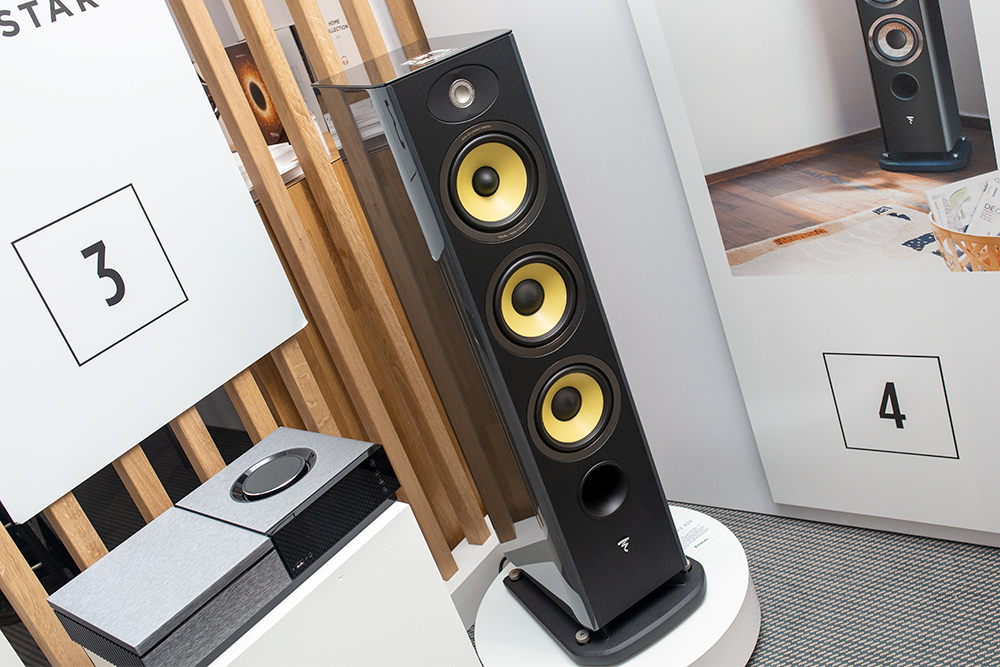 Focal and Naim continue to introduce interesting loudspeakers and electronics! The latest is the Aria K2 926 floorstander and Uniti Star Ash Grey all-in-one player. The four-driver, three-way K2 926 has two 6.5″ bass drivers, one 6.5″ midrange, and a 1″ inverted-dome TNF tweeter. The bass and midrange drivers use Focal’s distinctive yellow K2 cone material. The speaker cabinet sits on an affixed aluminum base for excellent stability. The K2 926 is finished with a leather-like material on the front baffle and Ash Grey side panels. 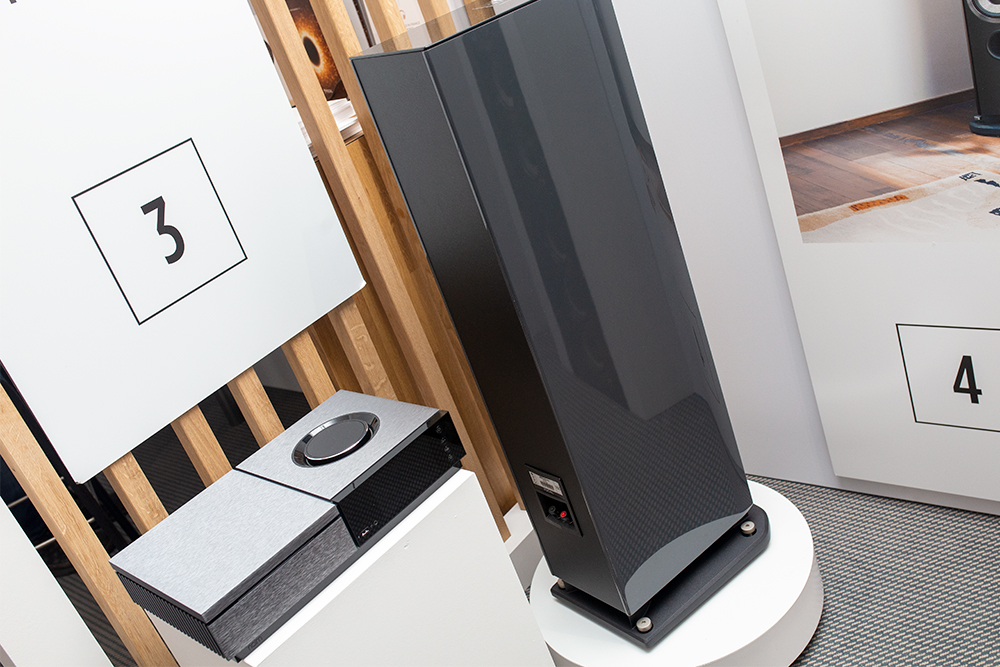