I’m the Munich newbie in the SoundStage! crew. High End has been on my bucket list for over a decade, and it’s all I hoped it would be and more. In addition to my regular beat for SoundStage! -- Simplifi’d hi-fi -- I have another gig for Munich: headphones and portable electronics. It’s a big assignment, because there are scads of new products -- more than I can cover in my first report (so check back tomorrow). All prices here are in euros (€) or US dollars ($). 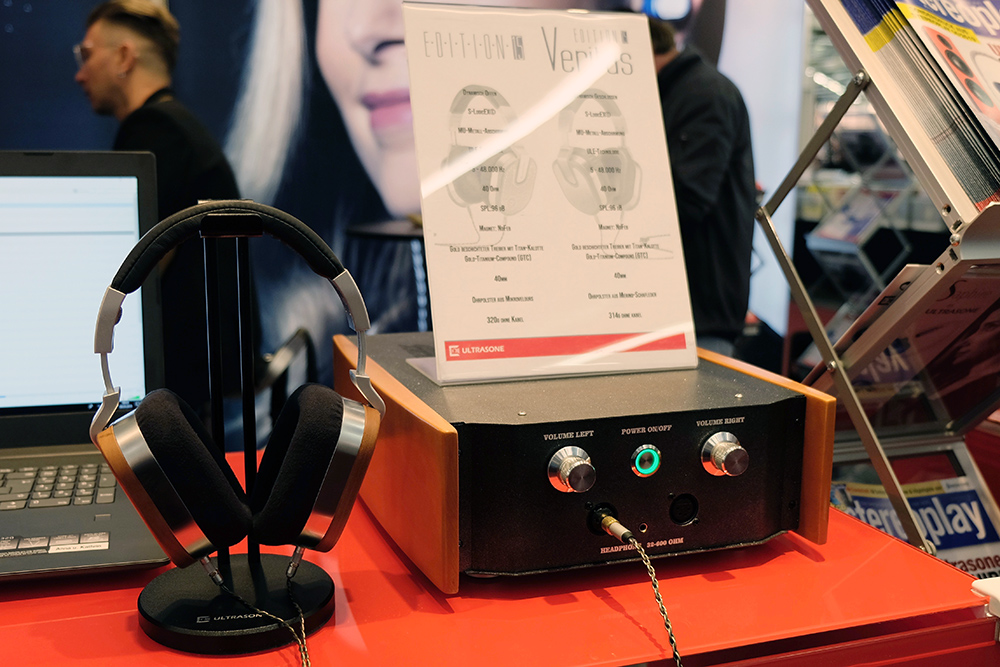 As soon as I entered the exhibit hall nearest the press room, I came across a brand that was new to me, though it has been around for 25 years: Ultrasone, which is based just outside of Munich. The main product launches were a closed-back version of the Edition 15 headphones it launched last year.

Like its open-back sibling, the Veritas 15 headphones (€3000) have cherrywood earcups, sheepskin headbands and cushions, and aluminum frames. They’re very comfortable. They use Ultrasone’s GTC (gold-titanium compound) dynamic drivers, which are mounted near the bottom of the earcups and are angled upward. 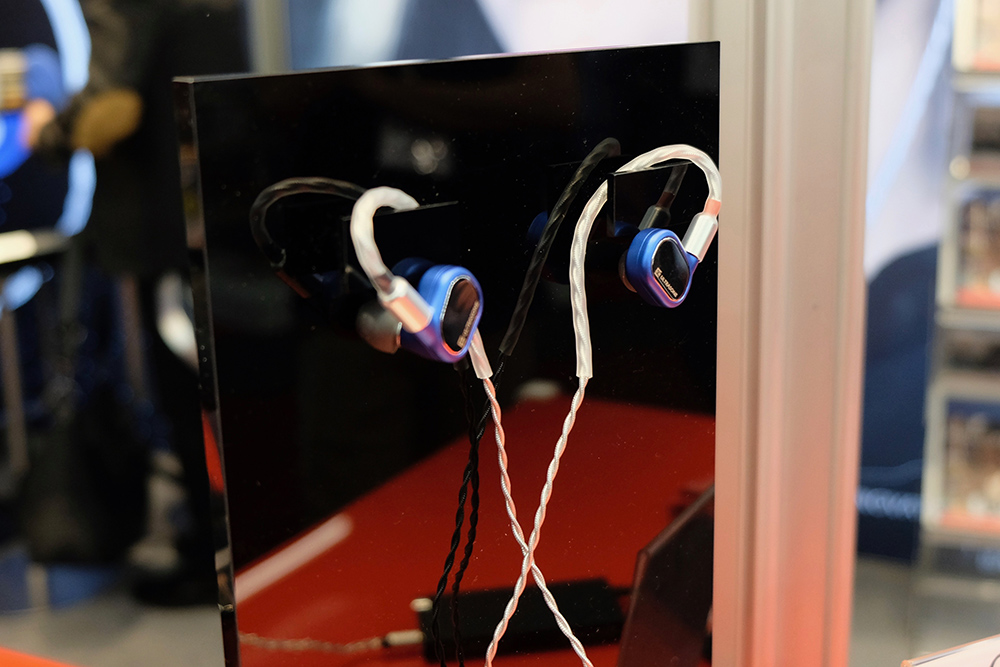 Also priced at €3000, the Ultrasone Saphire (this is the correct spelling of this model) in-ear monitors have six drivers per channel: dual balanced-armature (BA) drivers for lows, separate BA drivers for mids and highs, and an electrostatic double driver that acts as a supertweeter. Listening to an acoustic version of “Ain’t No Sunshine” by an unidentified band, I thought the acoustic guitar sounded gorgeous, with wonderfully natural attacks on the steel strings and extended decay. 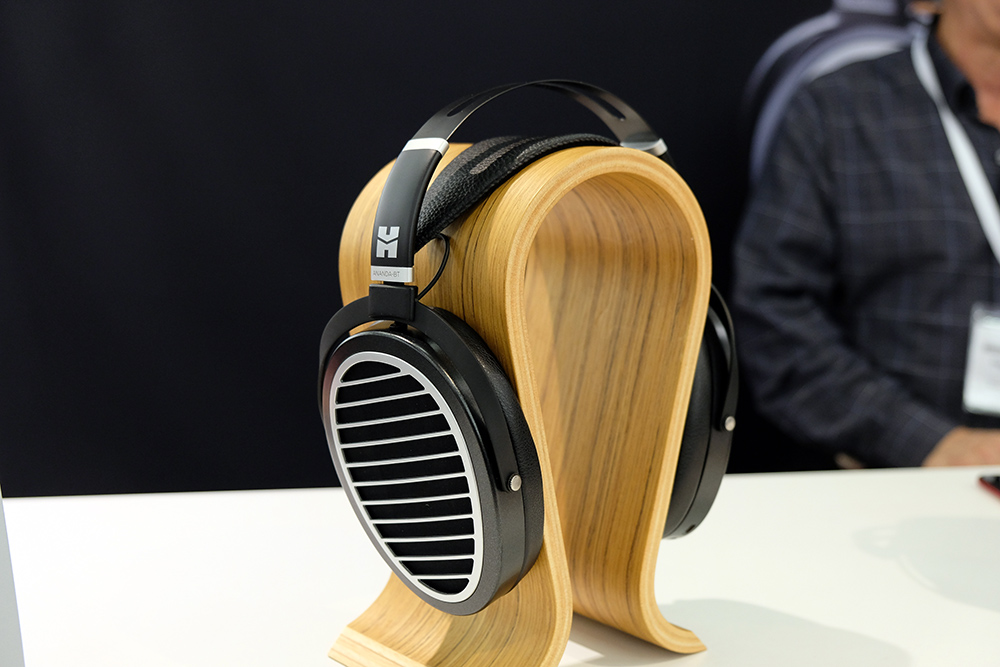 My second stop was HiFiMan, with which I am very familiar, as I use a pair of the brand’s Edition X V2 planar-magnetic headphones for home listening. HiFiMan had two new products on display: a Bluetooth version of its Ananda open-back planar ’phones (shown above), and its first-ever true wireless earphones.

The Ananda BT headphones will ship some time in the next two months -- projected price is €1400 to €1500. A wired microphone is included. The Ananda BTs support all the advanced Bluetooth codecs, including Bluetooth LDAC, which can transmit 24-bit/96kHz audio. The headphone charges via USB-C, and is said to run for eight to ten hours per charge. The Ananda BTs are every bit as comfortable as the wired version, but of course are somewhat heavier because they contain a battery and amplifier. 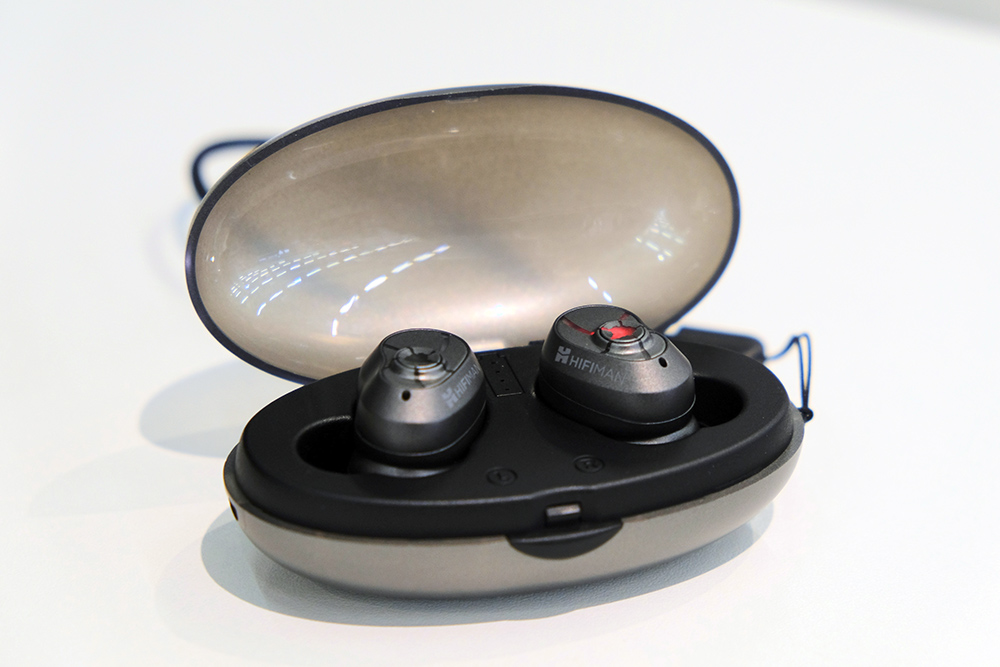 Also shipping in the next couple of months, the TWS-600 earphones (€199 projected price) are the first of a series of true wireless earphones planned by HiFiMan. HiFiMan says they run for 5.5 hours per charge, and have standby time of 1100 hours. The TWS-600s come with a charging box, which functions as a power pack that recharges the earphones, and packs enough juice for another 33 hours of running time. 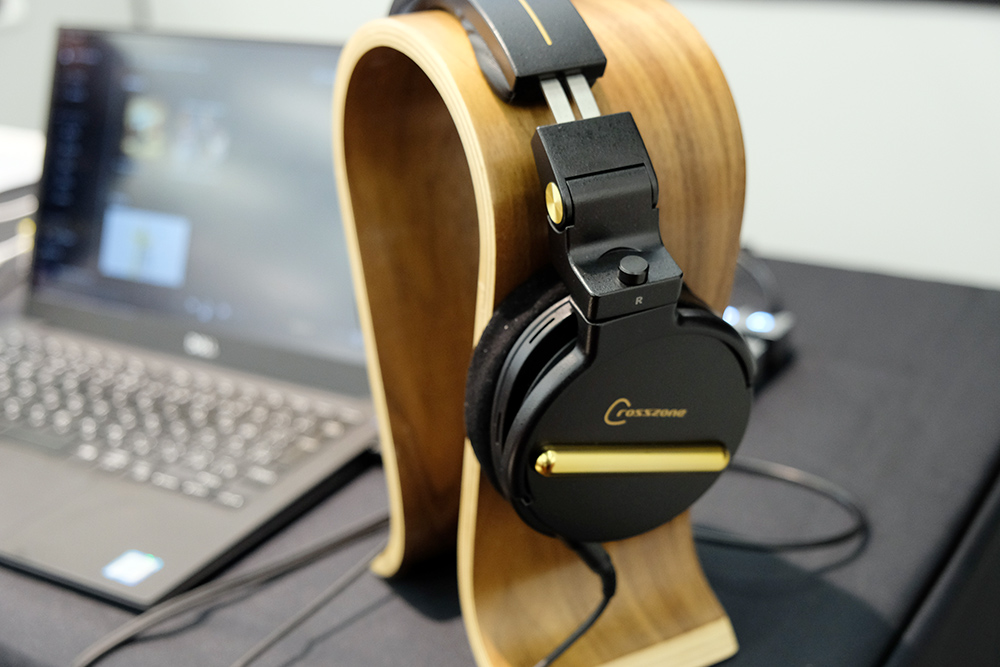 Another new headphone brand for me is Crosszone, from Japan. As the brand name implies, the company’s headphones use a form of crossfeed processing to get the sound out of your head. But this is done acoustically, rather than electronically. There are two models -- the CZ-1 headphones ($2300), which were introduced three years ago, and the brand-new CZ-10 headphones ($800), which are shown above.

Both headphones contain separate drivers in each earpiece for lows and highs, plus a third driver that carries information from the opposite channel, all of them beryllium-coated. The CZ-10s employ a 35mm LF driver, 23mm HF driver, and 35mm driver for the opposite channel in each earcup. The closed-back headphones have internal air chambers to create delay for the opposite channel. Playing the orchestral version of Mussorgsky’s Pictures at an Exhibition through the CZ-10s, I found that the sound certainly seemed out of my head, but was mainly off to the sides rather than in front. The overall sound was big, fast, and dramatic, though a little bass-shy. 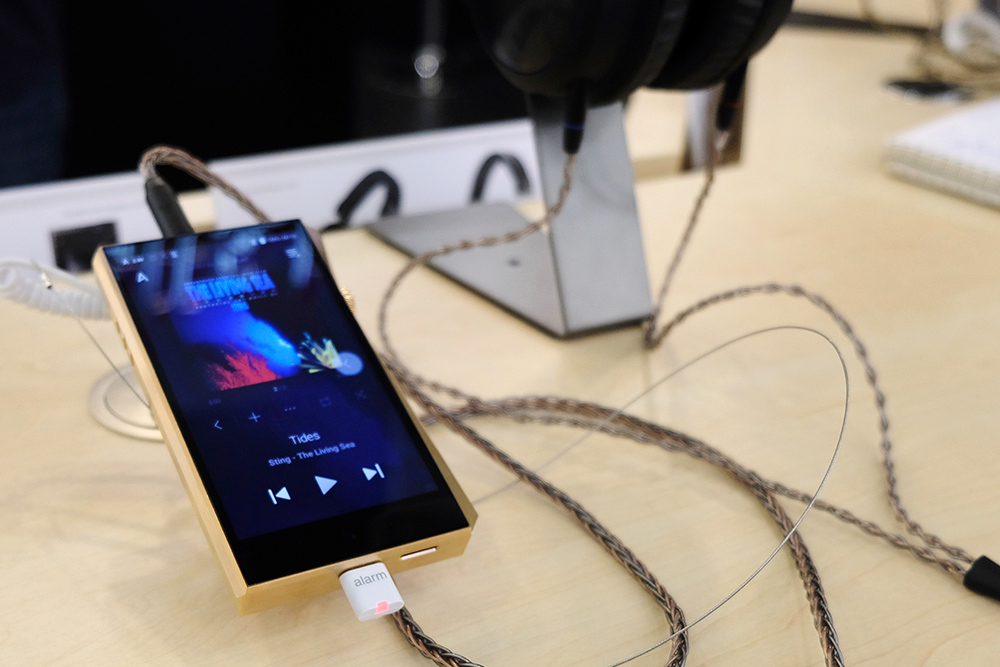 Astell&Kern had several new products, including a new version of its flagship digital audio player. Shipping in July for $3500, the SP2000 has 512GB of internal storage, plus a microSD slot that allows for another 2TB of storage. Improvements over the SP1000 include a more powerful amplifier and dual AKM AK4499EQ DACs. It’s the first player to use that chip, A&K says. With stainless-steel and copper construction, build quality is impeccable. The SP2000 has dual-band Wi-Fi with 802.11ac support, and Bluetooth 4.2 with aptX HD support. Maximum resolution is 32/768 and DSD512, with full MQA decoding. It supports scads of streaming services, including Qobuz, Tidal, Spotify, Deezer, and Amazon Music. 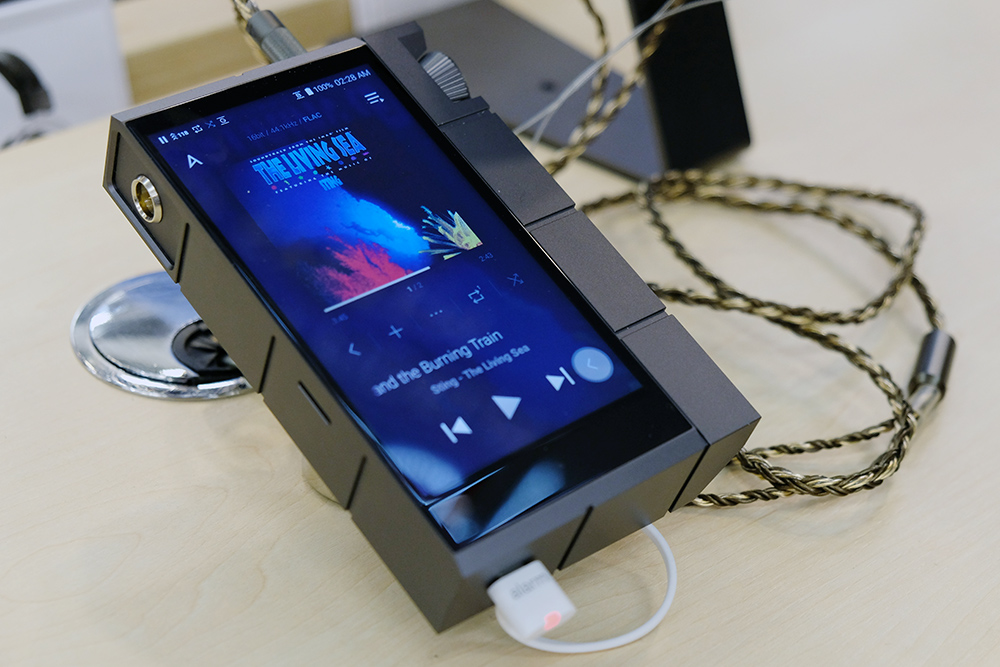 Shipping in late July are the new T9iE in-ear monitors, built for A&K by Beyerdynamic, and tuned for A&K players. Highlights of the design are a new vent port, said to improve bass response, and an acoustic filter, said to soften highs, with integral earwax protection. Price is TBA. 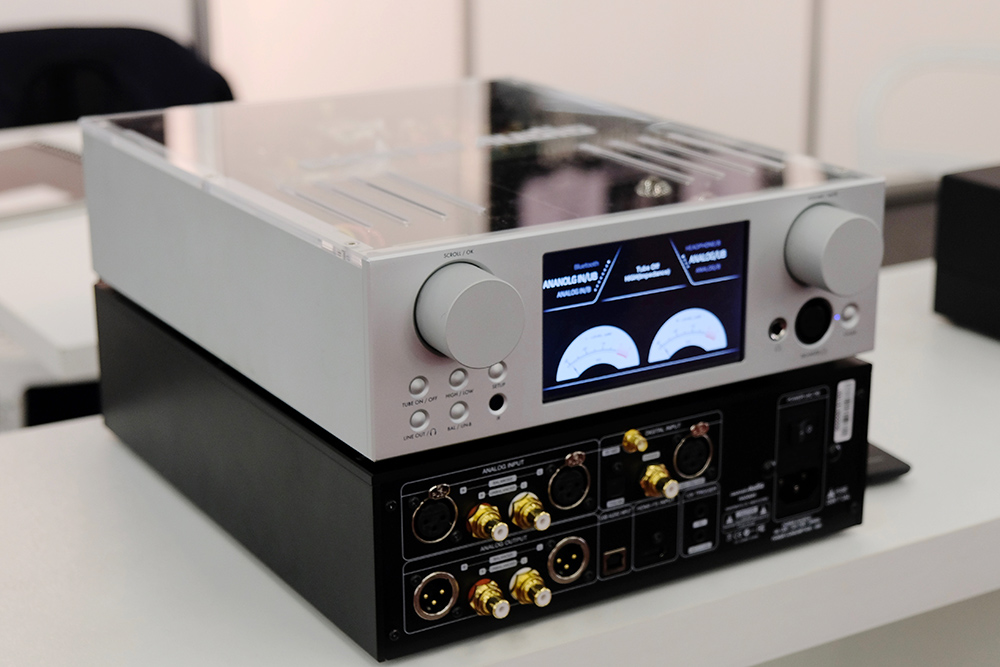