The Growing Disconnect Between High Fidelity and the High End

The world is indeed a smaller place these days. Social media has connected people from all walks of life and makes for the instant transfer of information around the world. Technology is, in fact, the vehicle for the convergence of cultures and the examination of disparate ideas by diverse groups of people even worlds apart. Our connectedness and its effect on our lives are unprecedented in human history.

But it's just not helping high-end audio like you might think it would. In fact, the goal of high-end audio -- the high-fidelity reproduction of music -- to my mind is, alarmingly, being lost among the noise (ahem). And the industry is suffering because of it.

The questions that need to be asked are Why? and Who's responsible? There is plenty of blame to go around.

Let's start with the high-end-audio manufacturers. Despite good intentions, sometimes they just can't get out of their own way. As I write this at High End 2012, I could cite numerous cases in point that I've witnessed over the past few days where manufacturers displaying their wares seem absolutely clueless as to what consumers want and how they want it delivered. What I want them to do is to communicate with clarity what their company is trying to accomplish with their products and why an audiophile should buy something they make. But when I see a $20,000 power cord from an unknown designer and no one with the company seems to be able to tell me why it costs that much, what is so special about it, and why on earth anyone would actually pay that kind of money for it, I just lose my mind. Maybe the example need not be that egregious (though it is real!). Many companies just lack a cohesive message explaining how their products advance the high-fidelity reproduction of music and why audiophiles should spend their hard-earned money for them. Those answers should come at the outset before the first CNC machine even cranks up.

The press is also to blame. High End is arguably the most important consumer-oriented audio-only show in the world, yet there was very little press presence that I could see at High End 2012. To my mind there should have been droves of reviewers and editors here interviewing, writing, photographing, recording, and posting about all things important in high-end audio right now. And the focus should be on good products that make music sound more real in the home -- not some of the nonsense that poses as high end -- whether that be a desktop system playing files from a computer or a state-of-the-art speaker system that actually advances the cause. A quarter-million-dollar-plus pair of stereo speakers that use off-the-shelf drivers, have zero science and engineering behind them, and sound so screechy that they could turn hi-rez into MP3 need not apply! Maybe the reason more press wasn't here is because of corporate budgetary constraints, or maybe it's just apathy. Whatever the reason, the best products at High End 2012 will go largely unseen by the people who need to see them most, and that is a shame. 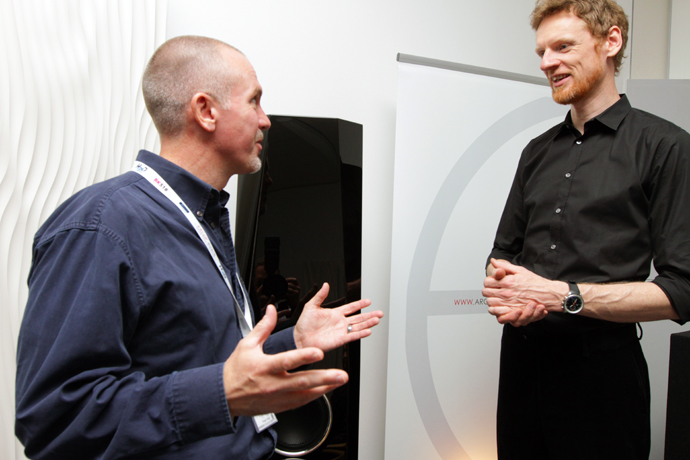 The consumer has a part to play as well. Over the last few days I've had the pleasure to talk at length to Laurence Dickie of Vivid Audio, Alon Wolf and Yair Tammam of Magico, Andrew Jones of TAD, Edwin van der Kley of Siltech / Crystal Cable, and Jörn Janczak of Tidal Audio, to name but a few . . . a virtual who's who of the best minds currently in high-end audio. Each one of them told me -- in great detail -- how they go about designing and manufacturing their exceptional products. What all these individuals have in common is that they use advanced science, cutting-edge technology, and real engineering methodology to bring their products ever closer to the ideal of music reproduction with perfect fidelity. Each one -- to a person -- wants what they sell to get out of the way so that audiophiles can enjoy music more. And they are wildly successful in doing it. Yet over and over I see audiophiles who simply refuse to learn from these talented people. And worse, there is often an embracing of nonsense -- by these same "audiophiles" -- put forth by the industry's charlatans who, through their pseudo science and voodoo marketing, are killing the credibility of high-end audio in the marketplace. If you reject the very scientific principals responsible for the best products, then you also reject the goal of high fidelity to begin with. 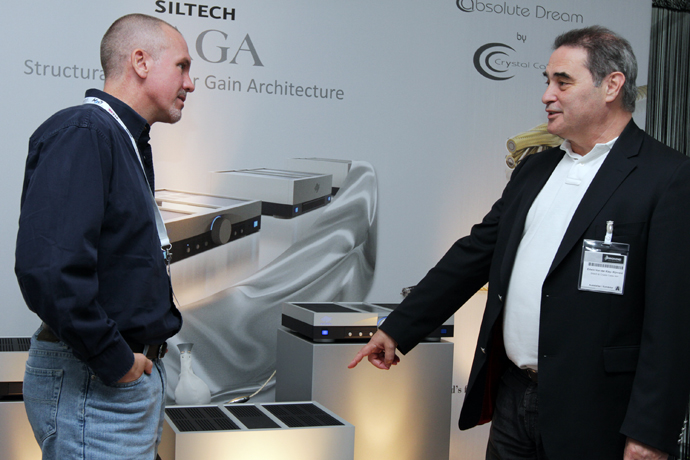 So let's review the problems: the good manufacturers can't always get their message clearly across to the consumer; the press can't reliably and consistently get this information from point A (companies) to point B (consumers) for whatever reason; and many audiophiles seem oblivious to the very best minds in the industry, and therefore the best products. The net effect of this Trifecta of Failure is that the very existence of the high end is in peril.

There were some great products at High End 2012. I'd like to think that these components will succeed in the marketplace because they bring audiophiles closer to the musical truth in whatever capacity they are designed to be used. They come at all different price points, including the wildly overachieving KEF LS50 at the affordable end of the scale and the super-high-performing Magico S5 that many audiophiles can aspire to.

Hopefully products of this quality will keep coming, packaged and delivered by manufacturers that communicate their goals clearly to the marketplace. Hopefully the press will report on and promote these excellent products and deliver the message of how they benefit the audiophile. And hopefully audiophiles everywhere will continue to pursue high-fidelity sound and realize that there are some brilliant people whose purpose in life seems to be to help them further that cause. If those things happen, then, yes, there is hope for the high end and for the high-fidelity reproduction of music in the home. I'll be at High End 2013 hoping for the best.