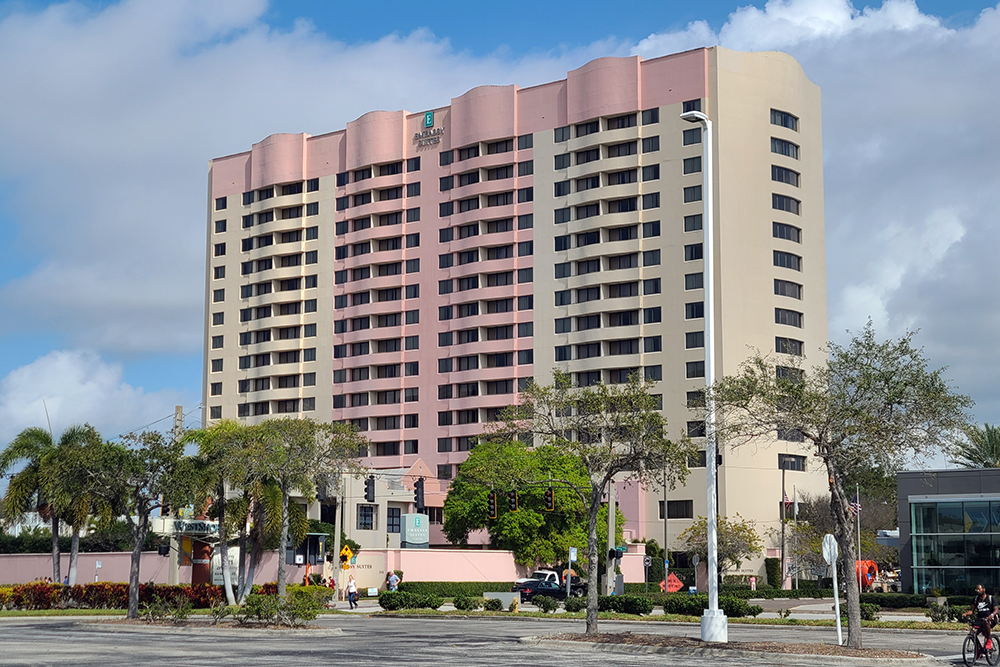 It’s fitting that Florida Audio Expo 2022 is the first hi-fi show I’ve attended since the COVID-19 pandemic began. That’s because the last show I attended prior to the pandemic shutting everything down was Florida Audio Expo 2020. It was held then at the same site of its inaugural year, 2019: the Embassy Suites by Hilton Tampa Airport Westshore, located in Tampa, Florida.  And it’s back there again this year. It’s a great place to hold a hi-fi show—if only to get so many of us out of the snow for a few days.

Because of the pandemic closing shows down and the current supply-chain shortages most manufacturers are experiencing, I wasn’t expecting too many new products at this show. But much to my surprise, it wasn’t long before I found some excellent products making their first public appearance. I’ve highlighted them below, with all prices in US dollars. 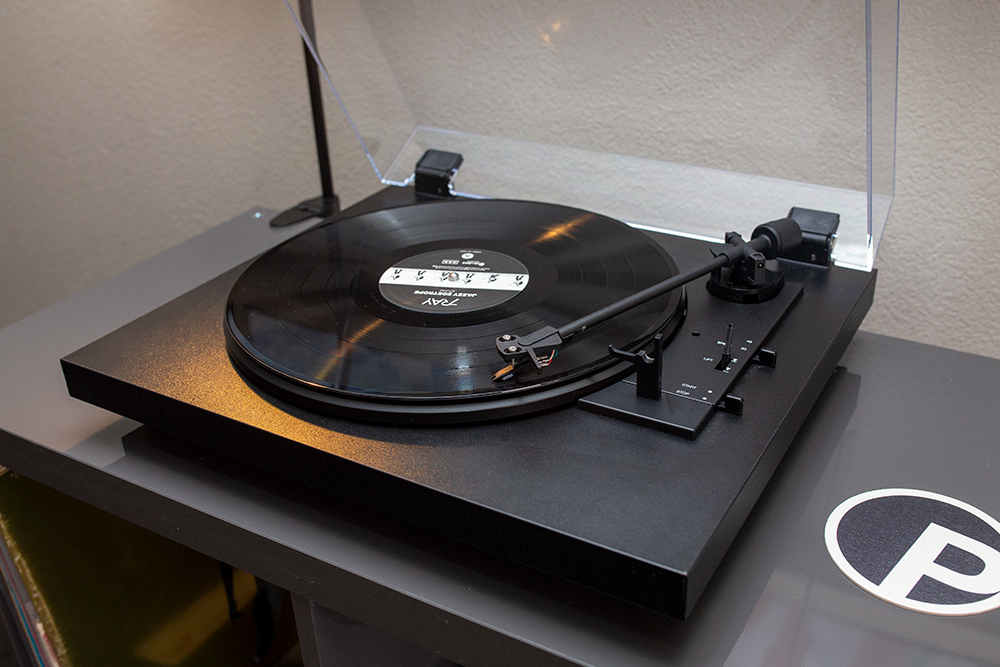 First off is the new Pro-Ject Audio Systems Automat A1 turntable, which carries a list price of only $499. According to the product information I dug up, the A1 is “handmade in Germany by a traditional manufacturer with a wealth of experience in making automatic turntables.” Per the name, the A1 is a fully automatic design that moves the tonearm over the lead-in groove of the record and returns it to the tonearm rest when it’s finished playing. Since ease of use is paramount, the A1 comes as a complete system—it includes a super-light 8.3″ aluminum tonearm with an Ortofon OM 10 moving-magnet cartridge already set up at the factory, plus a built-in phono stage and a Connect it E phono cable. 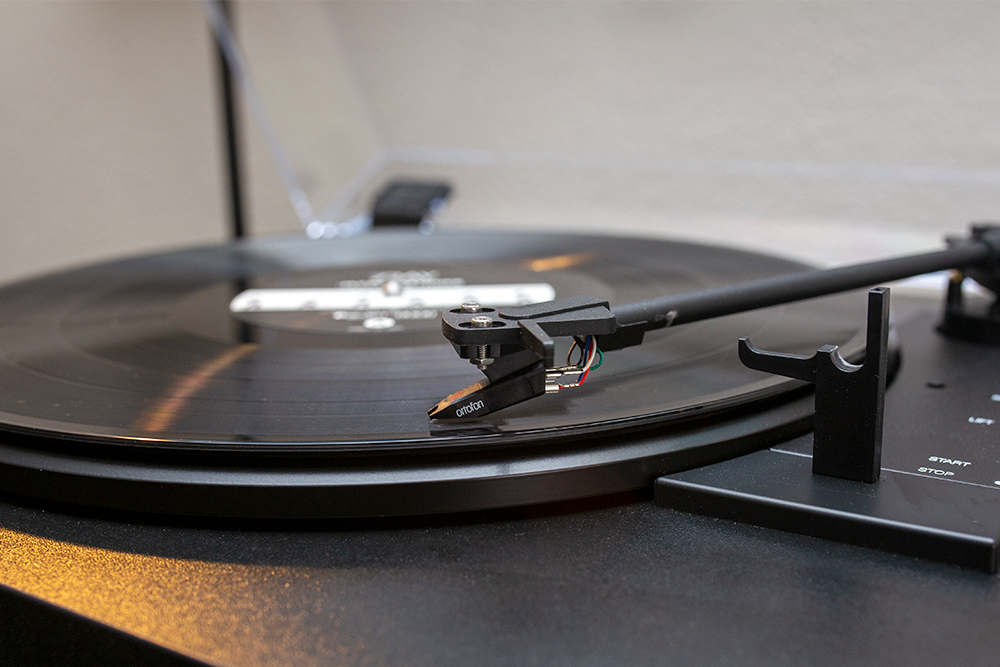 One of the important things that the company stresses in its literature is that even though it has automatic start and stop, once the record is playing, the mechanisms to perform these tasks “are completely taken out of the equation and are not affecting the playback quality—the free movement of the tonearm and platter—at all! And because the automatics are working entirely mechanically—no additional electronics needed—they are truly not influencing or degrading sound quality during playback!” The fact that this caliber of turntable with these features is made in Europe and can be offered at this low of a price is truly impressive. 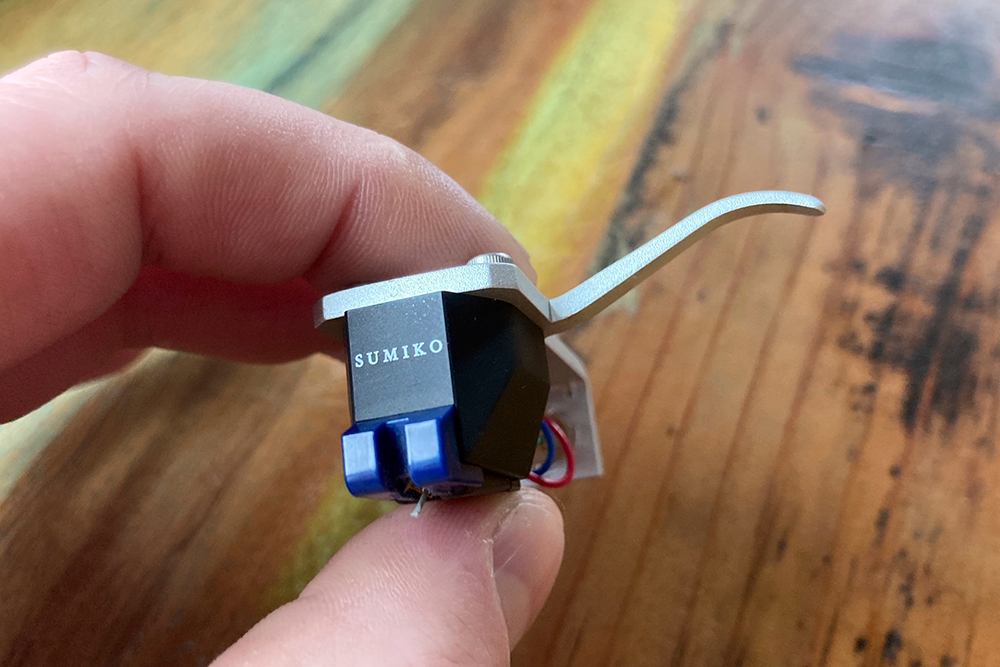 Sumiko distributes the above-mentioned Pro-Ject turntable in the United States, along with the rest of the products the company makes. But since 1982, Sumiko has also made cartridges. The newest Sumiko cartridge, which was announced just four days ago, is the Wellfleet, a moving-magnet design priced at $449. 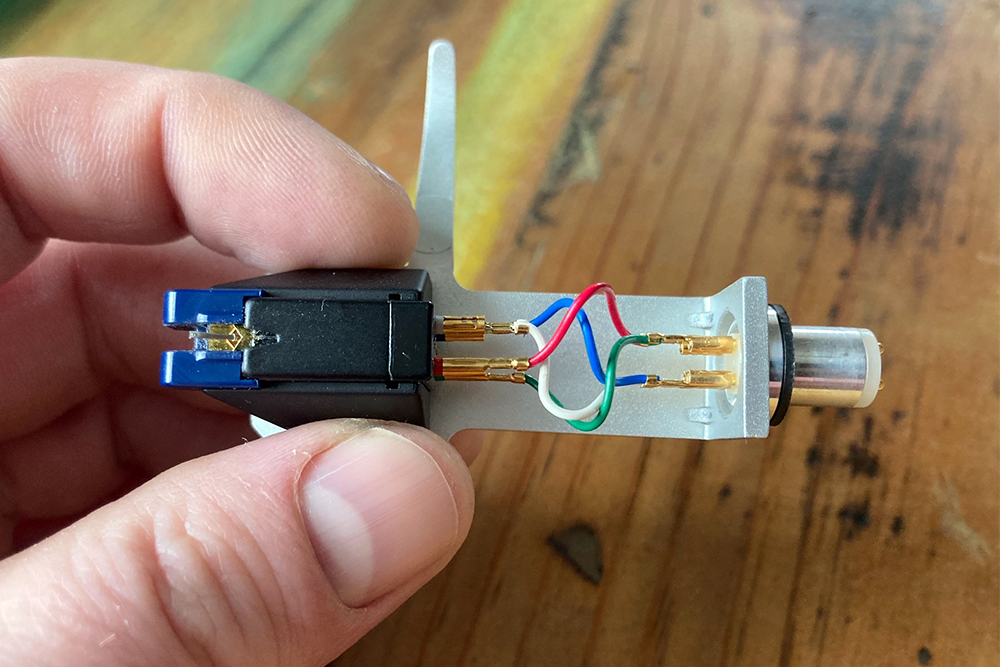 According to Sumiko’s press release: “Wellfleet utilizes a highly polished nude elliptical stylus, eliminating the bonding between the stylus tip and shank. With the new assembly, excessive mass in the shank is cut away to further reduce tip mass, resulting in a faster, more direct, and more accurate response of the stylus’ movement by the cantilever and magnet. Sonically, this increases the process speed and focuses central images, pulling them toward the listener with a heightened sense for detail.” 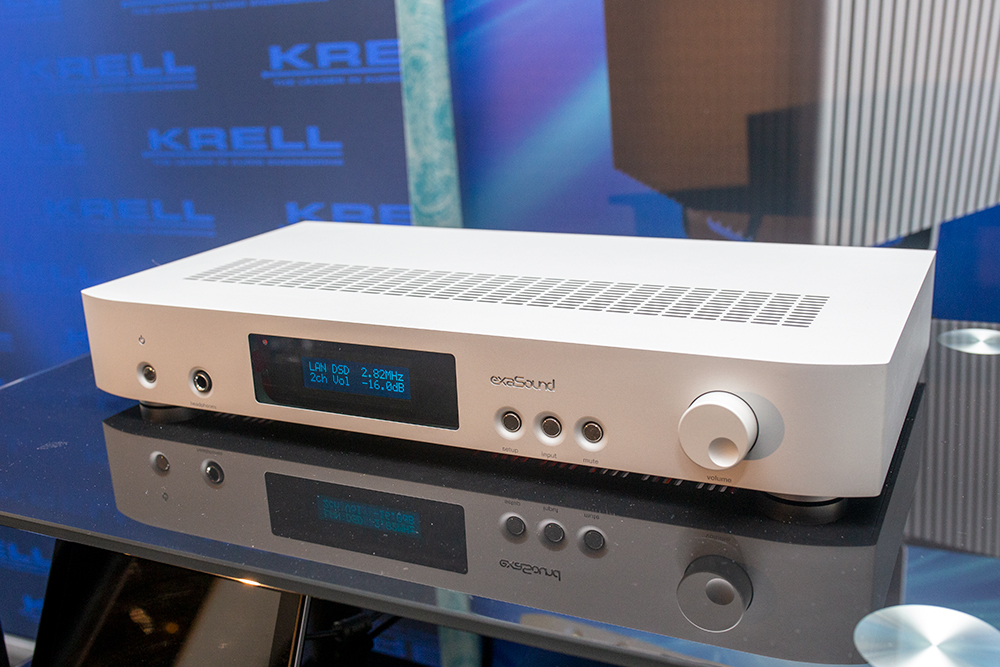 Also new this week is the exaSound s82 streaming DAC, which carries a not-insignificant retail price of $6499, though it has a boatload of features. At its heart is an ESS Sabre ES9038PRO DAC chip, which allows the s82 to support maximum resolutions of 384kHz PCM and MQA, 352.8kHz DXD, and DSD512—so pretty much any music format you can throw at it, though playing those resolutions also depends on the input used, since they vary in terms of data-carrying capabilities. According to the product literature, the “s82 features proprietary asynchronous USB streaming, ASIO and Core Audio drivers, and FPGA core to achieve 32bit, low-jitter, bit-perfect signal path.” It’s also Roon Ready and is said to support “streaming with Signalyst HQPlayer, UPnP, AirPlay, Bluetooth, and online services Tidal and Qobuz.” 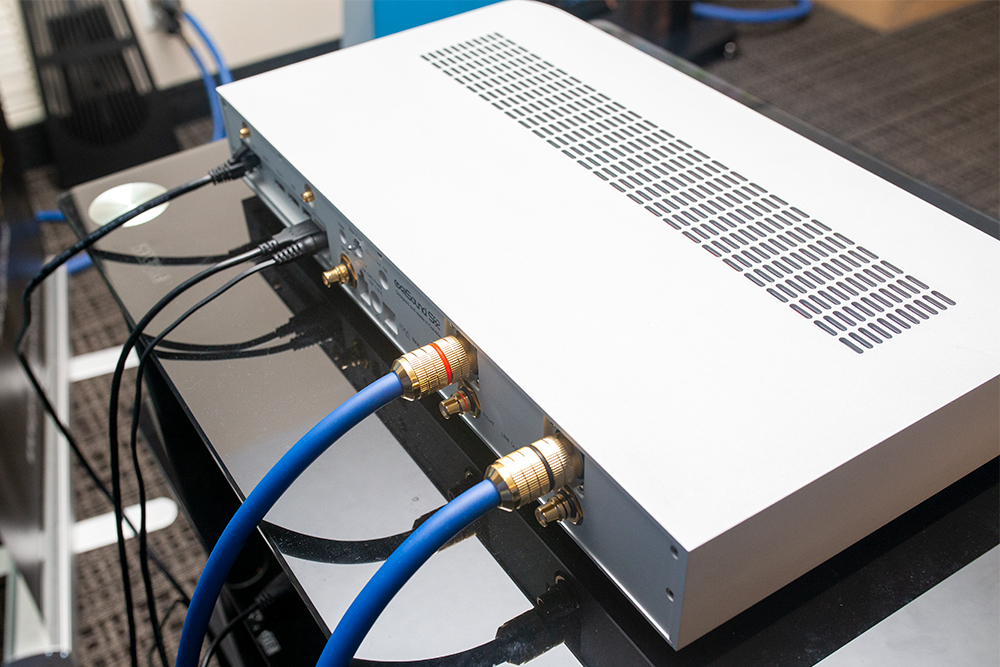 Wired digital inputs include one each of the following: S/PDIF coaxial (RCA), S/PDIF optical (TosLink), USB, and ethernet. Bluetooth and wi-fi connectivity are available for wireless connections. The s82 has both single-ended (RCA) and balanced (XLR) analog outputs that, if needed, can be used simultaneously, so you can route music to two sets of inputs in a single system or to two completely different systems. There’s also a 1/4″ headphone jack mounted on the front panel’s left-hand side. On the right side of the front panel is the company’s ZeroResolutionLoss volume control, which uses the chip’s internal volume control, but is said to be comparable to the best analog volume controls because the change in volume happens right when the digital signal is being converted to analog. The volume control can be bypassed, but if it’s used, it allows direct connection of the s82 to a power amp. 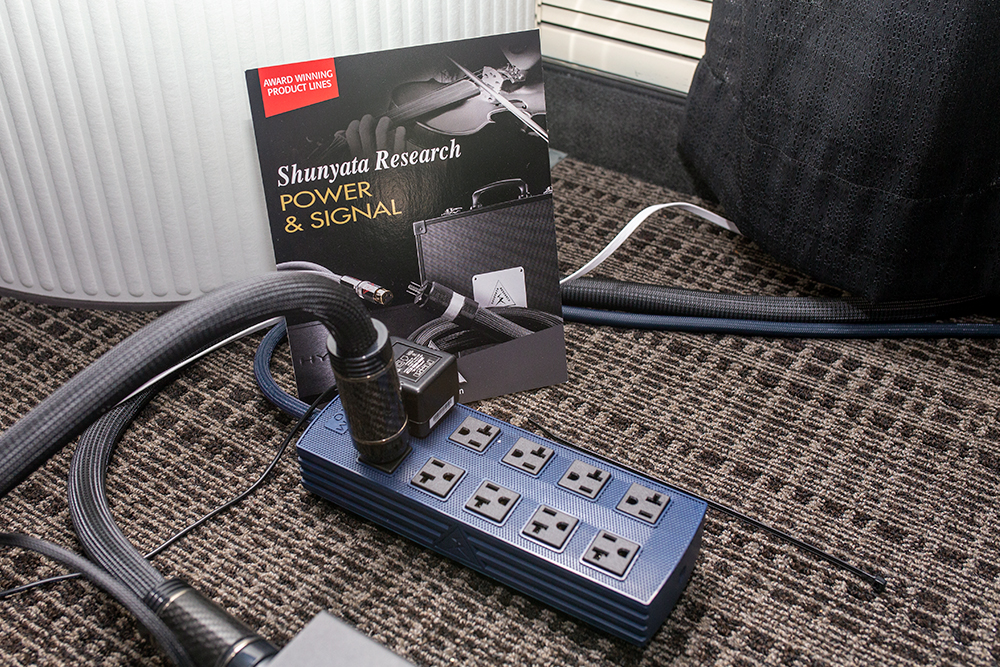 Shunyata Research has made its name in high-end hi-fi by making power-related products that the company backs up with measurements to show how they reduce powerline noise. The newest product from Shunyata Research is the Venom PS10 power distributor, priced at $798, which is claimed to offer 24dB of noise suppression. As the model name implies, the PS10 has ten receptacles. The press release for it states, “The Venom PS10 has it all: massive system capacity, noise reduction, American-made precision craftsmanship, an included high-performance power cord, plus Shunyata’s proven performance and lifetime limited warranty.” 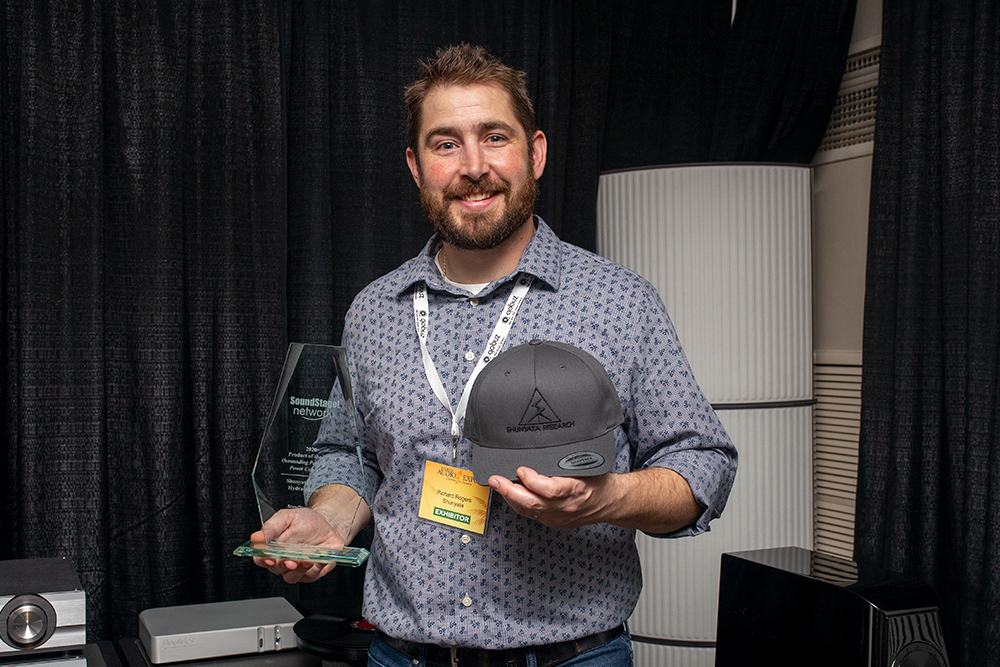 Since Shunyata Research’s Richard Rogers was at Florida Audio Expo representing the brand (he’s the North American sales and customer-service manager), we were able to present him with a long-overdue award—the trophy that Shunyata Research won when the Hydra A12 power conditioner was named a 2020 SoundStage! Network Product of the Year. We have three years of these awards to personally give out to manufacturers now that we can start going to shows and meeting with more companies again. 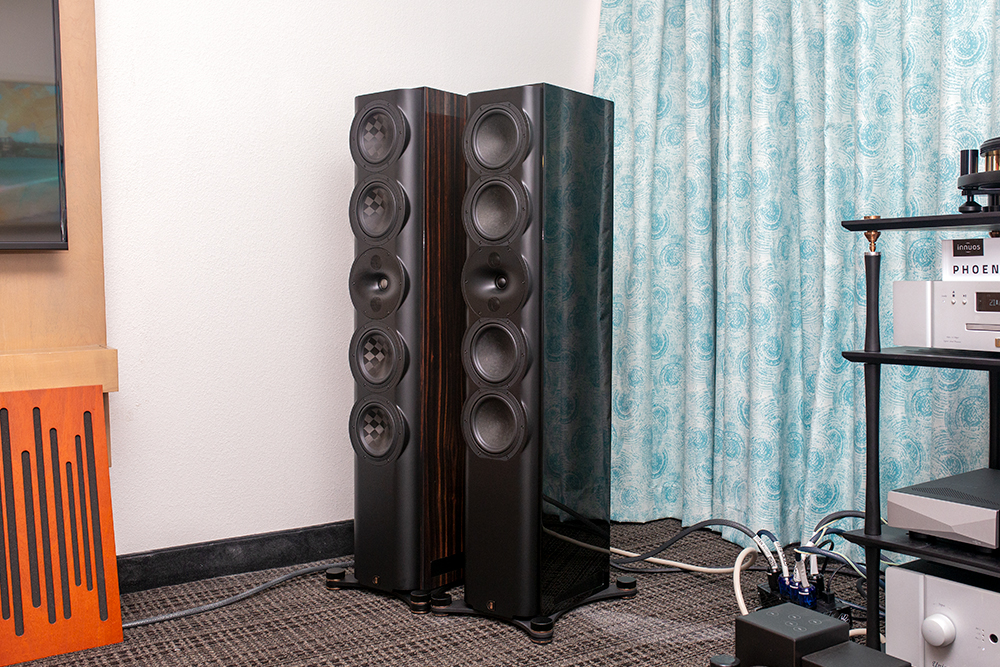 Perlisten Audio began in 2016, but in just over five years it has made an incredibly strong name for itself by creating a wide range of high-performing loudspeakers with some unique technologies. The newest is the R7t floorstander (in front in photo), which is priced at $9990/pair in piano-black or piano-white finishes, which are the only two finishes available for it. It’s based on the company’s successful flagship loudspeaker, the S7t floorstander (behind), which is priced at $17,990/pair in the standard piano-black or piano-white finishes, but is available at a higher price in wood finishes. The R7t measures 49.9″H × 9″W x 13.7″D, while the S7t sizes out at 51″H × 9.5″W x 15.7″D. They were both showing in the room of retailer Tenacious Sound.

Like all of Perlisten’s loudspeakers, the R7t has three tweeters set up in what the company calls a DPC-Array, which is primarily used to control the directivity of the midrange and high frequencies. But whereas the S7t uses one 28mm (1.1″) beryllium-dome tweeter in the center and two 28mm TPCD-dome tweeters, with one above and the other below, the R7t uses three 26mm (1″) silk-dome tweeters in those positions. Augmenting the DPC-Array are four 165mm (6.5″) woofers, with cones made of pulp fibers. The crossover points aren’t given in the literature, but it’s said to be a four-way design, as the S7t is. 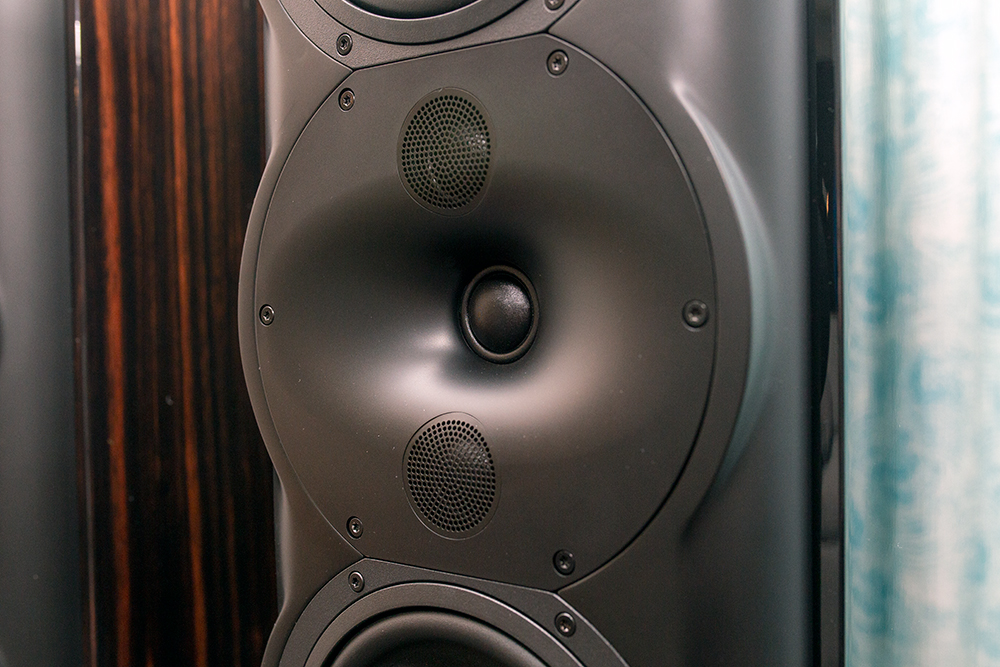 The specs the company claims for the R7t are pretty impressive: frequency response from 80Hz to 20kHz within a +/-1.5dB window, 90dB sensitivity (2.83V/m), and 116dB peak output with <3% second- and third-harmonic distortion. Finally, the R7t can be configured with bass-reflex (i.e., ported) low-frequency loading for output down to 19Hz or as an acoustic-suspension (i.e., sealed) design to deliver bass to 30Hz. Without a doubt, we’d like to get a pair of Perlistens in—maybe this model—to see if they live up to the specs, as well as the hype other models have been getting.