I’m not the kind of audiophile who tweaks my system endlessly -- I usually set up my components and speakers well and pretty much forget them unless something really intriguing comes along. Still, I like regularly looking at audiophile accessories, power products, and stands, if for no other reason than to see what’s out there and what could pique my interest. At Florida Audio Expo 2020 I found several things worth writing about, which I’ve detailed below. All prices are in US dollars. 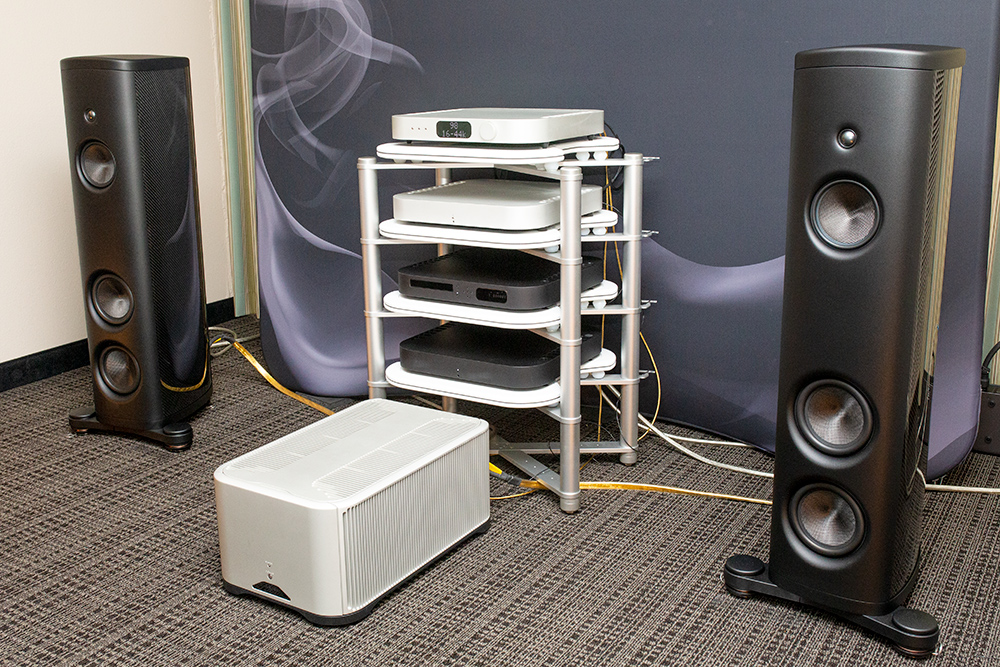 MSB Technology, which is based in Watsonville, California, showed a rack simply and appropriately called The MSB Rack. (You can assume by that name there won’t be another one.) The product isn’t new, but it appealed to me here because the company did something clever with it that I hadn’t seen other rack makers do . . . 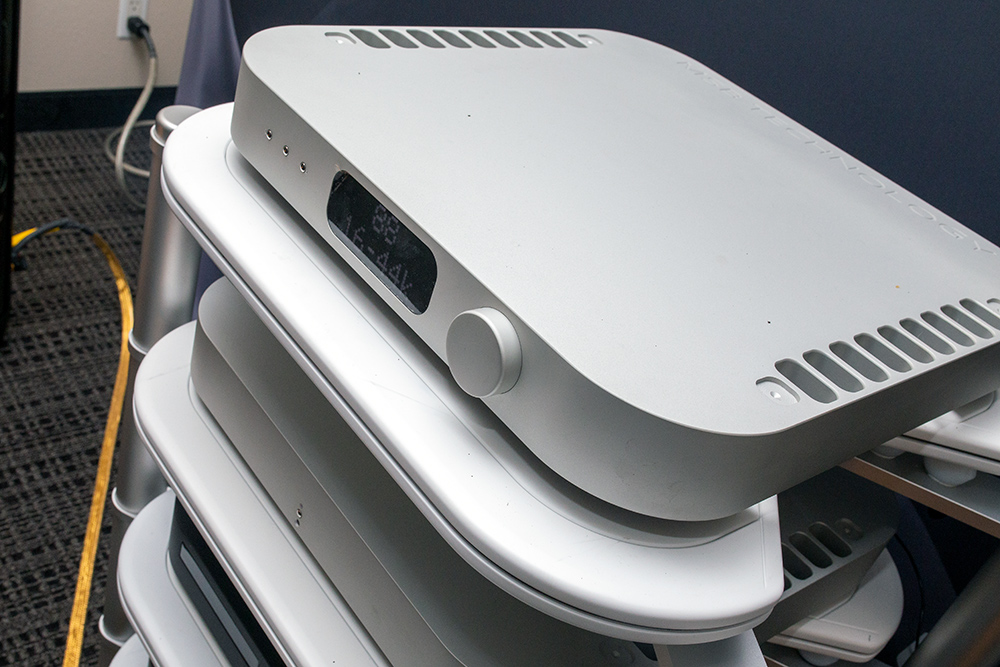 . . . by shaping the front and rear portions of the shelves to match the contours of its components. That might seem like a small thing, but when you see it, it looks really good. There’s also some tech built into the stand. The posts and shelf supports are aluminum, perfectly finished. Each shelf is made of two layers of an unidentified composite sandwiching a polymer core. Urethane footers then separate the shelf from the aluminum support. The bottom shelf has spikes that rest on discs (if you’re driving through carpet, forget the discs). Each shelf tier costs $4995, so for the four-tier model at FAE 2020, the total price is $19,980. 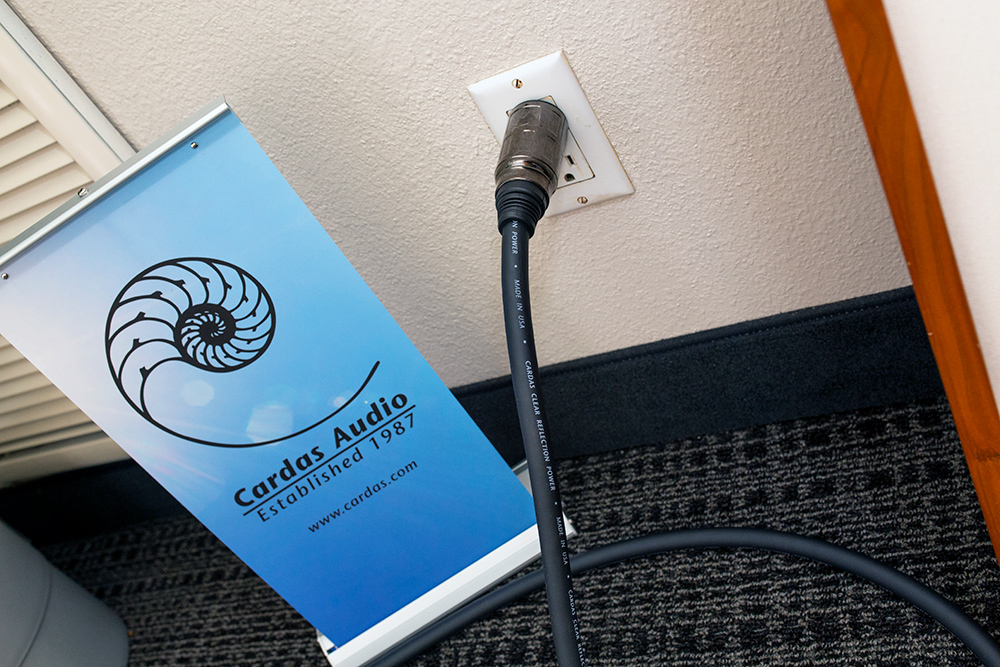 Cardas Audio came out from its home base in Bandon, Oregon, to debut a new power cord at FAE 2020 -- the Clear Reflection, priced at $650 for a 1.5m length (each 0.5 meter increase is $100). We were told that three 11.5-gauge conductors similar to the ones in the company’s upscale Clear power cable make up each Clear Reflection. It’s double-shielded with a “straight end-to-end, un-choked ground leg.” According to Cardas, the Clear Reflection is ideal for medium- to large-sized power amps. 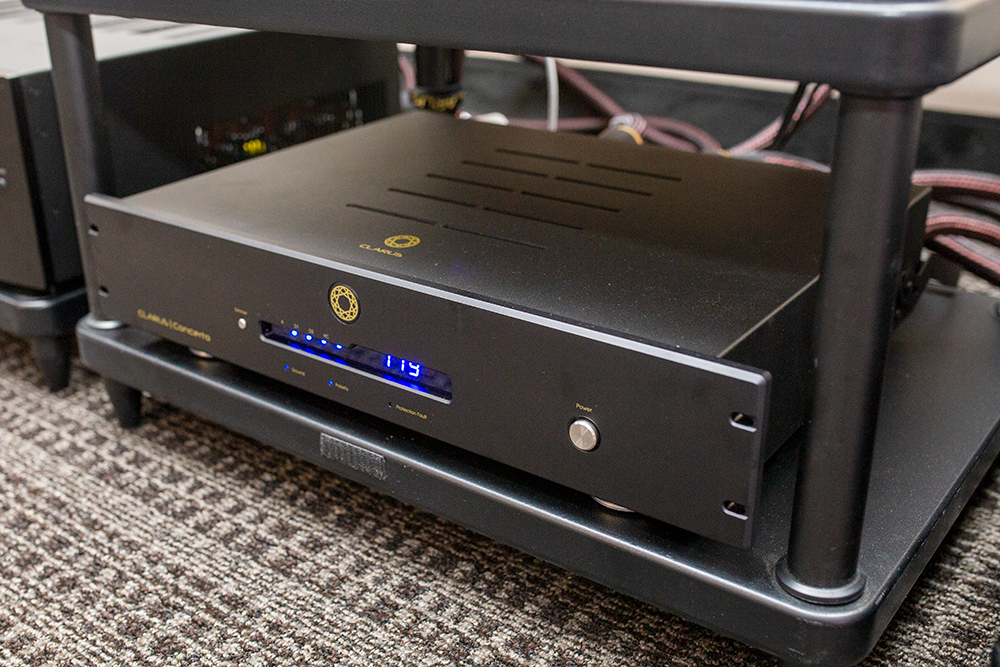 Clarus Cable was more or less on home turf -- it’s based in nearby Orlando, Florida, about 88 miles from the Embassy Suites by Hilton Tampa Airport Westshore, which is home to the Florida Audio Expo. At this show, the company’s cables and the subject of this caption, the Concerto power conditioner, were used with Anthem electronics and Paradigm loudspeakers. The Concerto is priced at $3600 and is said to represent “a radical new way of designing an application-specific filtered AC energy delivery system.” On its backside are eight hospital-grade outlets, two labeled High Current, for amplifiers; four labeled Digital, for DACs, disc players, streamers, and the like; and two labeled Analog, for, say, phono stages and preamplifiers. 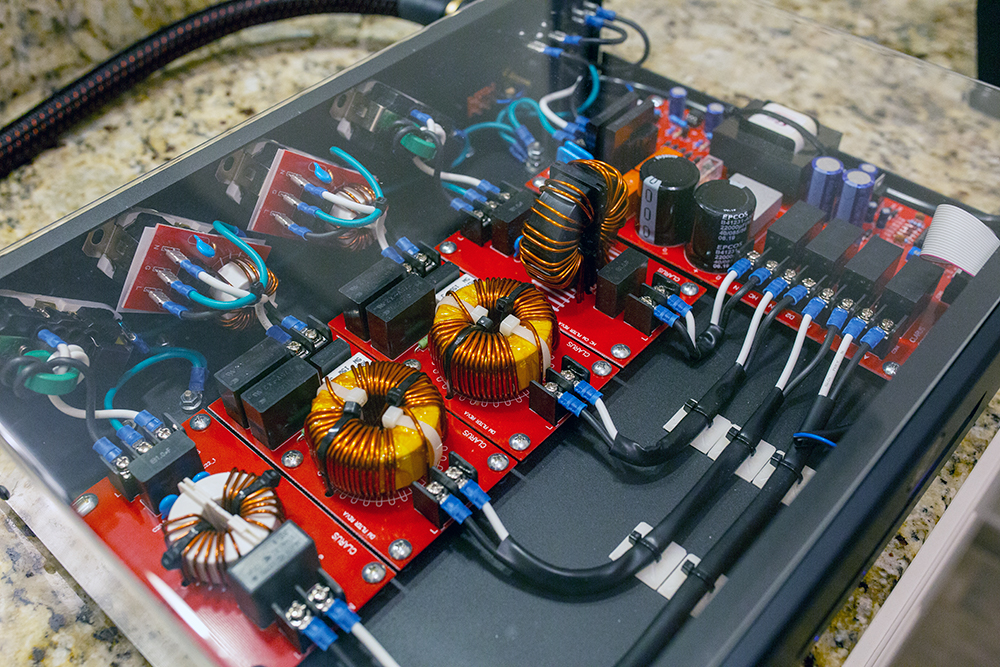 Inside, the Concerto is chock full of parts. In addition to noise suppression, the Concerto is designed for over and under voltage, as well as surge protection. Although I didn’t get a picture of the backside, I wanted to mention a clever feature it has -- a “shelf” extending out of its bottom to support really heavy power-cord connectors. 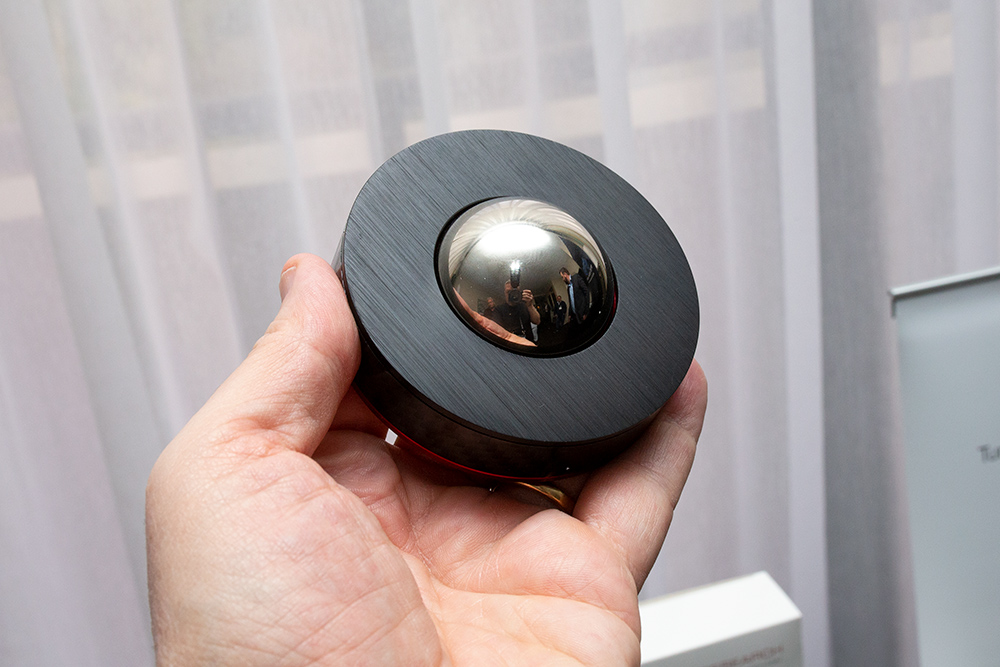 Synergistic Research, which is located in Santa Ana, California, showed its new MiG SX footer, which sells for $995 for a set of three. It is said to be an “evolution” of its original MiG footer, which was released in 2008. MiG, by the way, stands for Mechanical Interface Ground. According to the company’s literature: “We start with a new specially tuned MiG resonator forged from high carbon steel and add a precision-machined aircraft aluminum and carbon fibre three-piece chassis engineered to distribute vibration through a special tuning disc and a UEF tuning element into carbon tungsten ball bearings.” 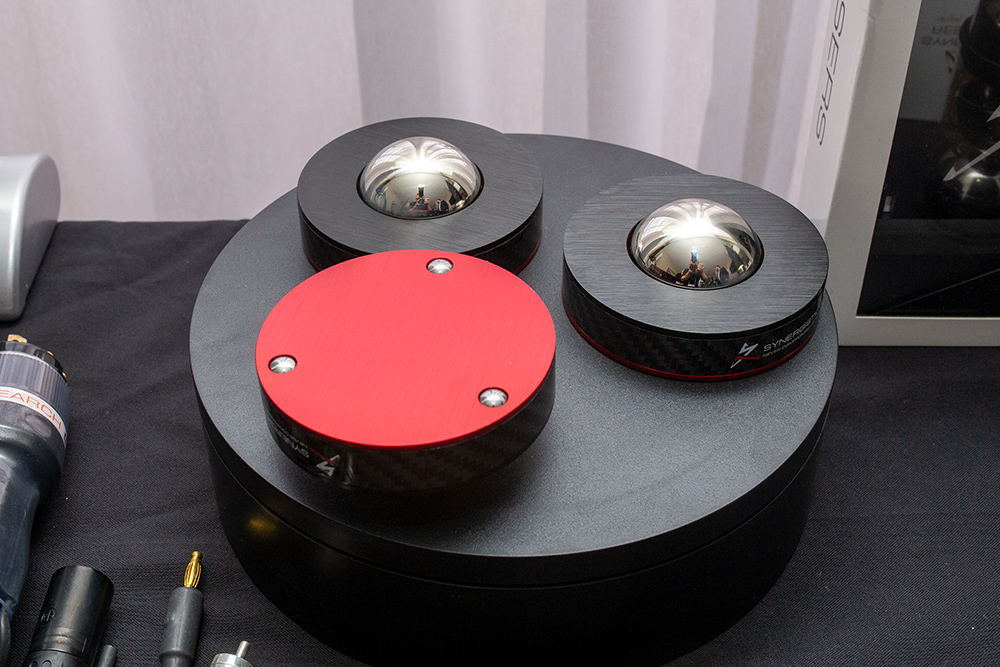 From what I could see, the MiG SX footer looks nicely made. What’s more, you can use a trio of them in two different ways, configurations they call Pin-Point and Ambient. For Pin-Point, two of the MiG SX footers are placed so the large ball bearings are facing down, while the other has the large bearing facing up. Ambient is the opposite -- two large ball bearings facing up, one with it facing down. These placement differences, they claim, affect imaging and bass. Obviously, $995 is a lot of money for footers, but since adding three MiG SX footers requires nothing more than lifting up a component and placing the footers underneath, you can simply find a dealer who will let you try them and see if they make a difference to the sound. If someone finds they don’t do anything, they can easily walk away. But for those audiophiles who find they do something beneficial, I’ll bet they’ll find a way to cough up the dough. 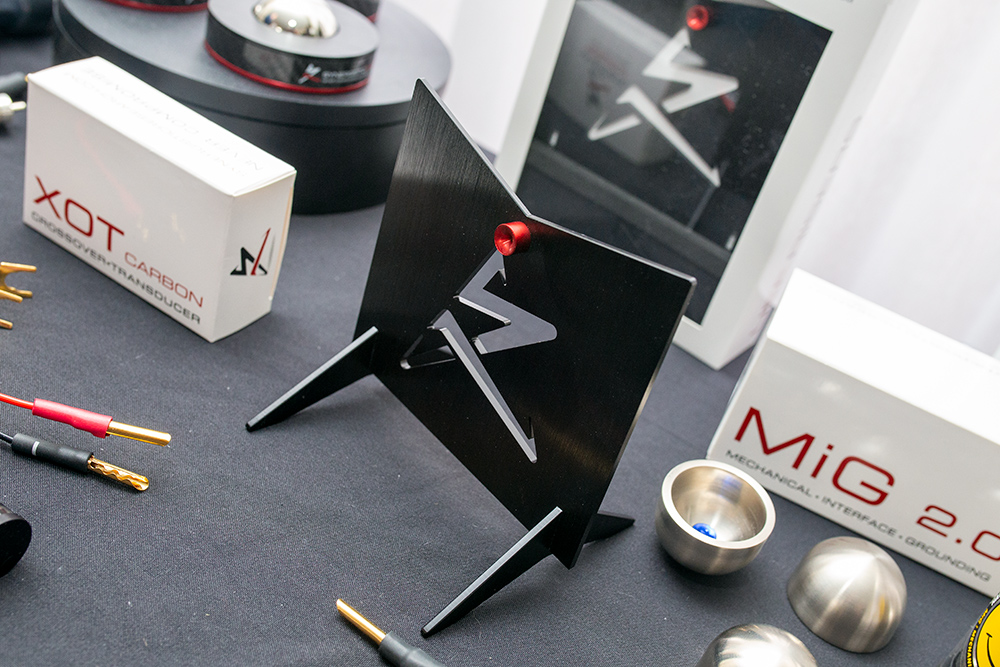 Synergistic Research also showed a footer of a different type -- its UEF Performance Elevator, which is designed to lift up speaker cables, interconnects, power cables, or any other type of cable that might touch the floor. According to the company’s literature, it chose to make the UEF Performance Elevator from aluminum “for its musicality, neutral tonal balance, low-frequency weight, and high-frequency air.” Each one also has a Synergistic Research HFT attached to it, which looks like a little red button. From the literature again, HFTs are said to “oscillate at high frequencies, creating an energy field in your room that overpowers room vibrational distortions to correct phase and frequency interactions for harmonic balance in your treated room.” The UEF Performance Elevator is priced at $399 for four, which might seem expensive, though there’s also this: they come with a 30-day money-back guarantee. So if you don’t like them, send ’em back. 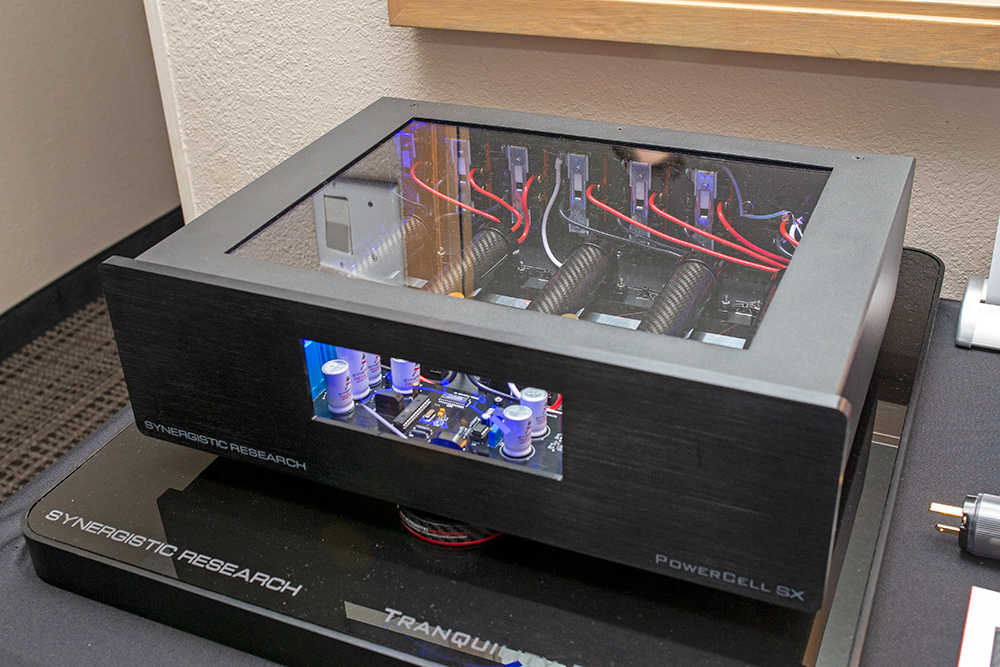 Synergistic Research also displayed its brand new PowerCell SX, which has 12 outlets and is priced at $8950. Because it’s so new, I couldn’t find much about it at the show, so I went to the company’s website to learn more about the product: 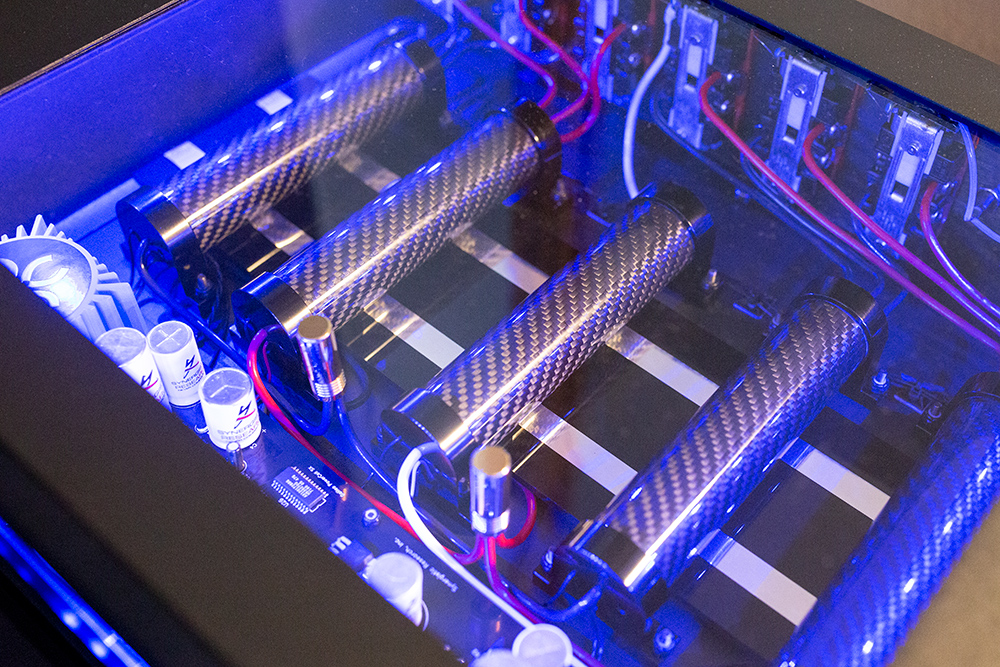 Besides the technical stuff, I must say that the PowerCell SX looks pretty damn cool. The glass top wasn’t only to show off the insides at FAE 2020 -- that’s how the consumer gets it, too. Inside there are LEDs to light up its guts that can be changed to different colors to better match the system’s other components or the user’s taste. Andy Wiederspahn, the company’s marketing director, told me that the PowerCell SX is so fresh that only three have been made: the one I photographed, the one on live display in the room next door (see caption below), and another one that will be shipped to Howard Kneller, one of our SoundStage! Ultra reviewers. 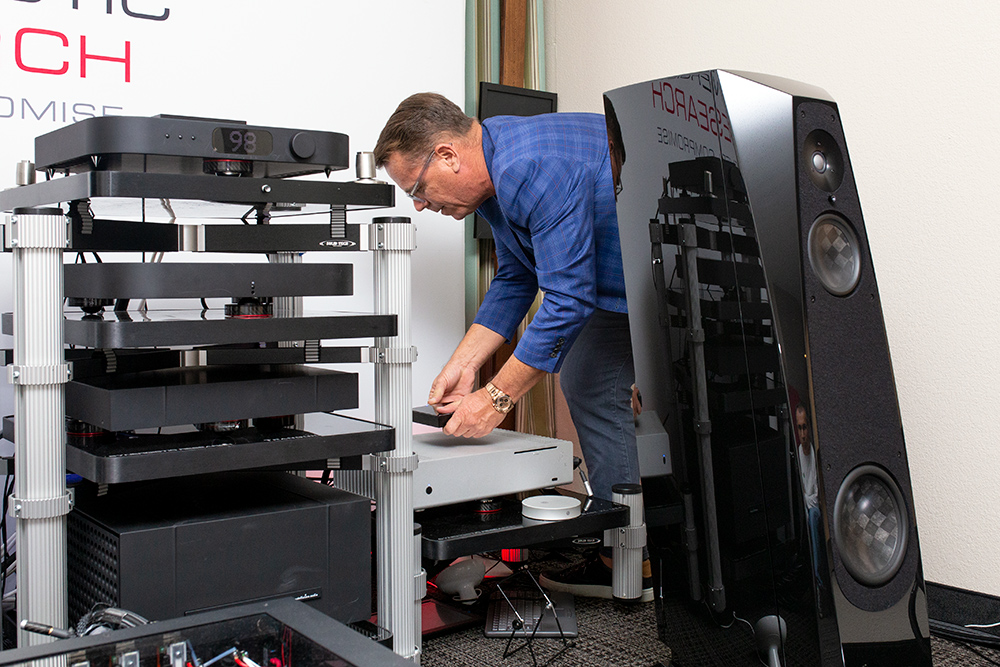 Last but not least, I have to bring up something that was going on with Synergistic Research at FAE 2020 in regard to accessories and tweaking, because it was a lively, popular part of the show. In one of the two Scott Walker Audio display rooms, which was where Synergistic Research was showing its stuff along with Magico, MSB Technology, Constellation Audio, and Rockport Technologies, Synergistic Research founder Ted Denney was continuously demonstrating his products as music was being played. Sometimes he demonstrated the product alone (i.e., simply in or out of the system), but sometimes he pitted one of his against a competitor’s product. When I was there, he demonstrated the PowerCell SX and the UEF Performance Elevator on their own, plus one I haven’t mentioned yet, the Tranquility Base, because it’s not that new.

The photo above shows Denney comparing the Tranquility Base to what he said is a similar product from Nordost in terms of the technology employed. If you follow Denney on social media (mainly Facebook), you’ll know that Denney has made himself rather controversial there with the way he discusses his products. I’m sure that comparing his products to a competitor’s at a show will make him just as controversial in the non-online world. That said, as far as I could tell, the audience loved every minute and most were nodding with each change, indicating to me that they were hearing differences as he was switching this and that. If anything, that kind of thing probably made the show more fun for them.

That wraps up Florida Audio Expo 2020. We’ll be back next year.