I expected to pack all my coverage of the 2019 Florida Audio Expo into three articles, but I found enough to fill a fourth! For a brand new show, that’s impressive. What’s more, these final components proved to be some of the most interesting. Here’s the final batch, with all prices in US dollars. 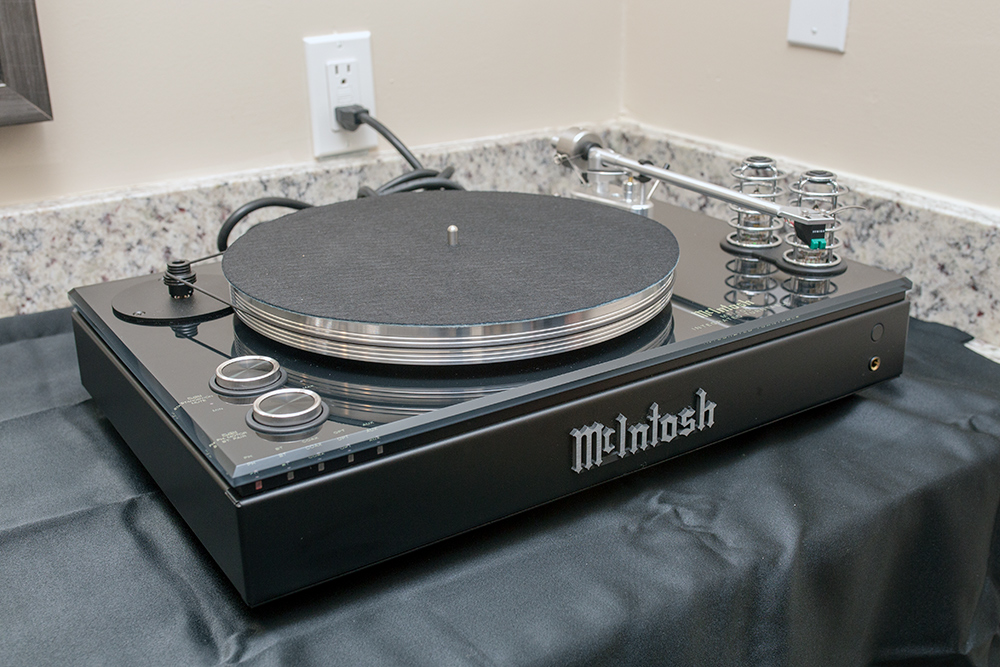 When McIntosh Laboratory announced its $6500 MTI100 turntable-DAC-amplifier last month, it polarized audiophiles, many of whom shared their reactions through social media. Some saw it as a great way to attract new customers to the McIntosh brand, while others saw it as some sort of corporate sellout and dumbing down of the brand. I was in the first group -- when I looked at the MTI100’s features, styling, and price, I could easily imagine the unit appealing to a well-off person who wants a close-to-all-in-one system (as with the Pro-Ject Juke Box turntables, you just add speakers to the MTI100) with excellent build and styling that’ll allow them to play digital and analog, and enjoy the coolness of tubes. Now that you know where I stand, here’s a quick rundown of what the MTI100 has on or in it: a full turntable and tonearm (both designed in collaboration with VPI), replete with a Sumiko Olympia moving-magnet cartridge; class-D-based amplification capable of 50Wpc into 8 ohms or 80Wpc into 4 ohms; two 12AX7 tubes in the preamplifier section; a headphone output; a built-in DAC with coaxial and optical digital inputs, as well as Bluetooth 4.2 support; and a pair of line-level RCA analog inputs. Time will reveal the MTI100’s commercial appeal, but I’m wagering it will be a hit and other brands will follow suit. 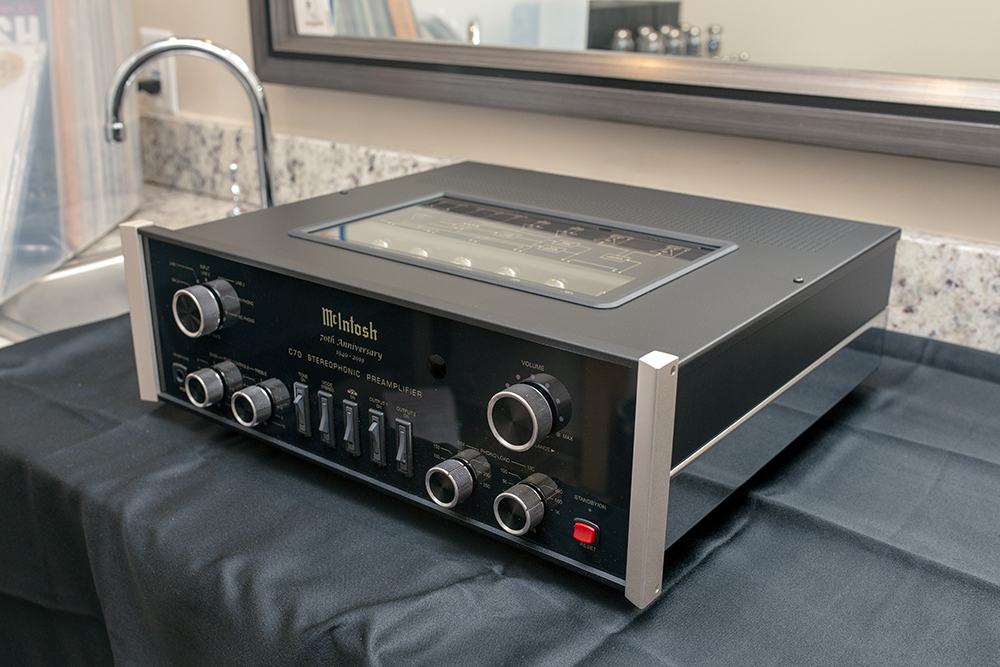 Seventy years -- has McIntosh really been around that long? I hadn’t really realized it until, in December 2018, the press release came out announcing the 70th-anniversary C70 preamplifier and . . . 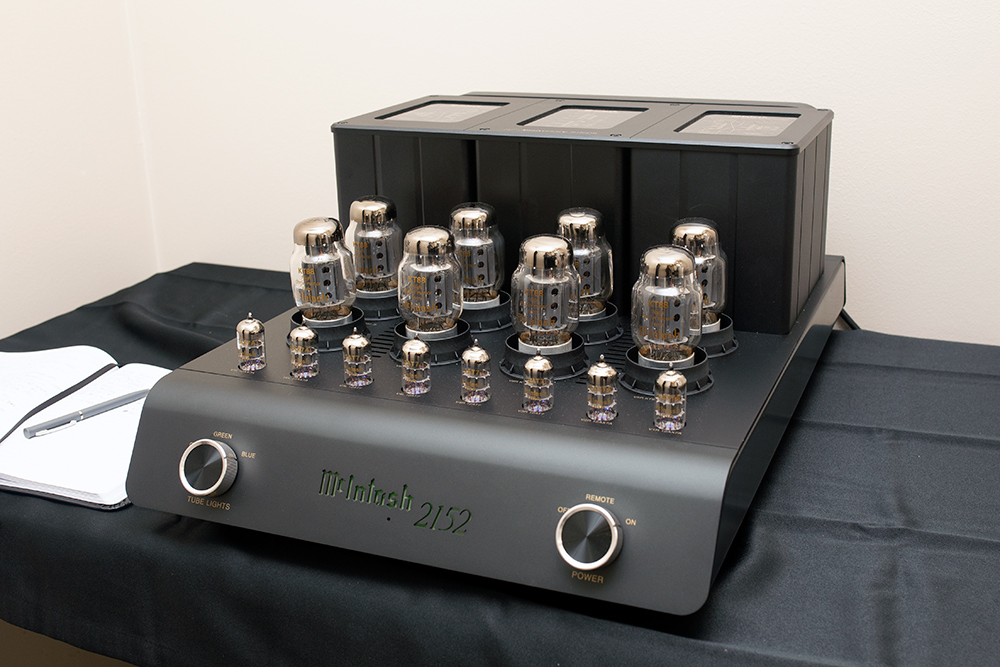 . . . MC2152 stereo amplifier, priced at $22,000 for both. Only 70 of the 70th-anniversary combos will be made, and, as part of the purchase price, for each set sold the company will donate $1000 to the Save the Children organization. Obviously, these designs rely heavily on vacuum tubes. The C70 has five 12AX7A tubes plus one 12AT7 tube, a moving-magnet/moving-coil phono stage, two sets of phono inputs, three sets of unbalanced RCA inputs, two sets of balanced XLR inputs, and defeatable bass and treble controls. The MC2152 has eight KT88, four 12AX7A, and four 12AT7 tubes, and is rated to output up to 150Wpc in 8, 4, or 2 ohms. If you don’t get in on the first 70 sets, they’ll be available afterward for $7000 for the C70 and $15,000 for the MC2152. But they won’t have the cache that the limited-edition run has, so move fast if you’re into having rare hi-fi pieces and donating money to a good cause. 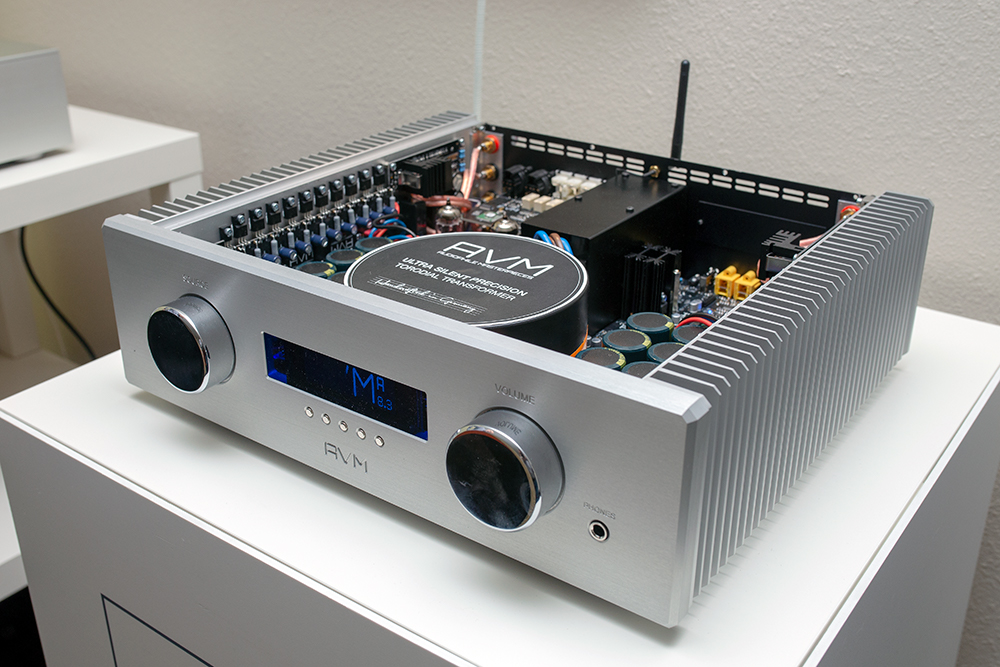 Germany’s AVM introduced its new A 6.3/8.3 integrated amplifier, which has a new innovation for them -- a modular line-stage board with tubes that can be left in or taken out. I was told that the board basically acts as a filter if it . . . 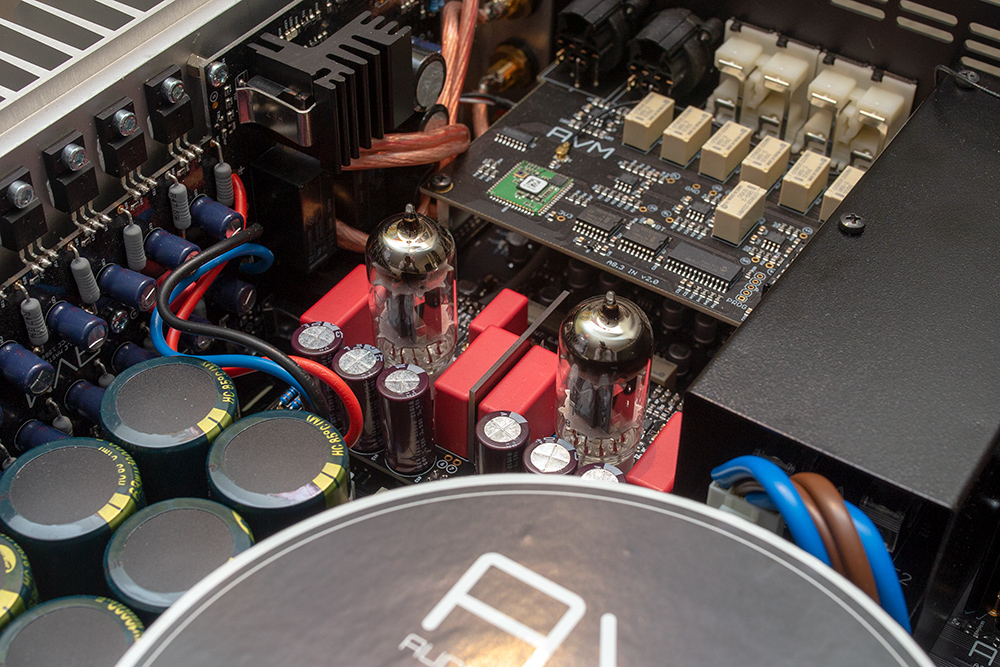 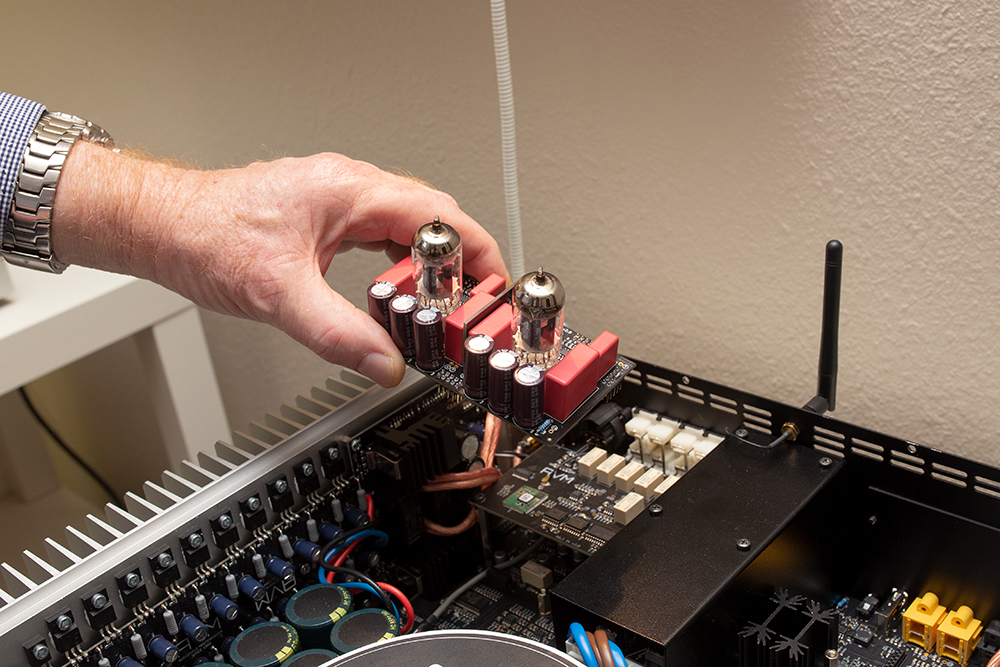 . . . removed so that the component is all solid-state and sounds more neutral. It kind of gives the amplifier two sonic personalities, as well as two names -- with the board in, it’s an A 8.3; without it, an A 6.3. Insofar as other features go, the A 6.3/8.3 has 20 MOSFETs per channel in its class-A/AB amplifier section for a claimed output of up to 200Wpc into 8 ohms or 330Wpc into 4 ohms. There are four pairs of unbalanced RCA inputs and one pair of balanced XLR inputs. For the onboard DAC, there are five digital inputs -- two optical, one coaxial, and one USB, the latter allowing for up to 32-bit/384kHz PCM and DSD128 -- as well as Bluetooth 4.2 support. And for headphone enthusiasts, there’s a pure class-A headphone amplifier. A nice touch is that the A 6.3/8.3 doesn’t come in a typical cardboard box -- it’s in a high-quality AVM-labeled flight case. Since the A 6.3/8.3 is new, pricing for the US market is still not settled, but I learned that the A 8.3, which can be turned into an A 6.3 with the quick removal of a board, should be $17,350. However, it was unclear as to whether an A 6.3, which should obviously be priced a little lower since it lacks the tubed board, would be offered at all. 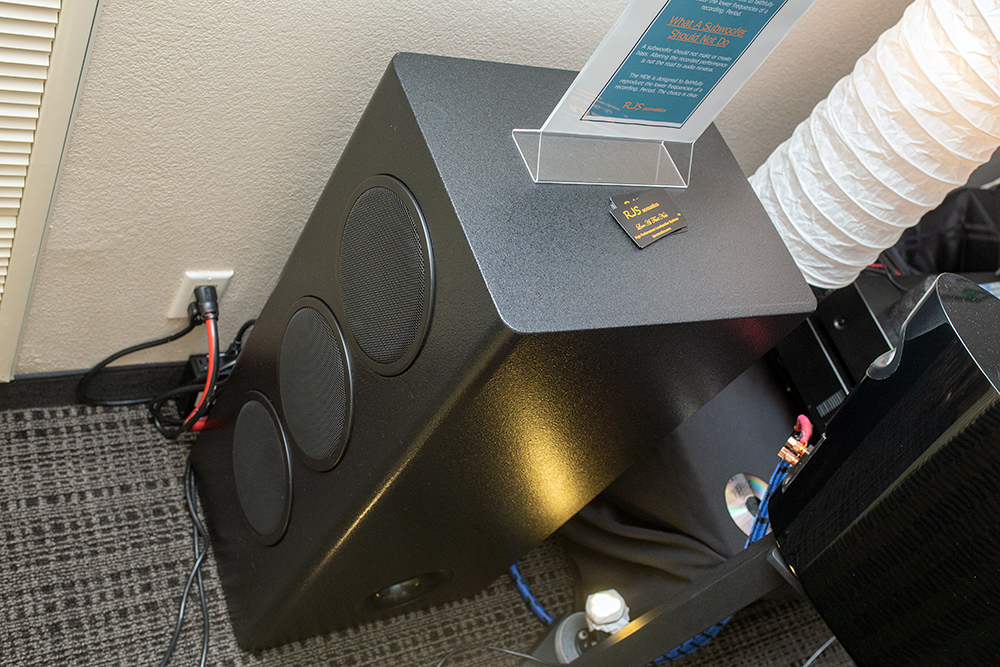 The Florida Audio Expo brought to light companies I never knew existed -- St. Petersburg-based RJA Acoustics, for example, maker of the MD6 Bass Augmentation System (BASS). Don’t let the fancy name fool you; it’s a subwoofer, though it has some interesting wrinkles to the design. Instead of using one really big woofer, the MD6 Bass has six 6.5" woofers, mounted three and three on opposing sides. The company claims the six smaller woofers combined can move as much air as a 16" woofer, but with greater agility. The company also says that the MD6 reaches down to 25Hz, flat, with no equalization applied. Furthermore, since the woofers are mounted on opposing sides of the cabinet, all operating in phase, their forces cancel out each others’ vibrations that would otherwise be introduced into the cabinet. Powering the MD6 is . . . 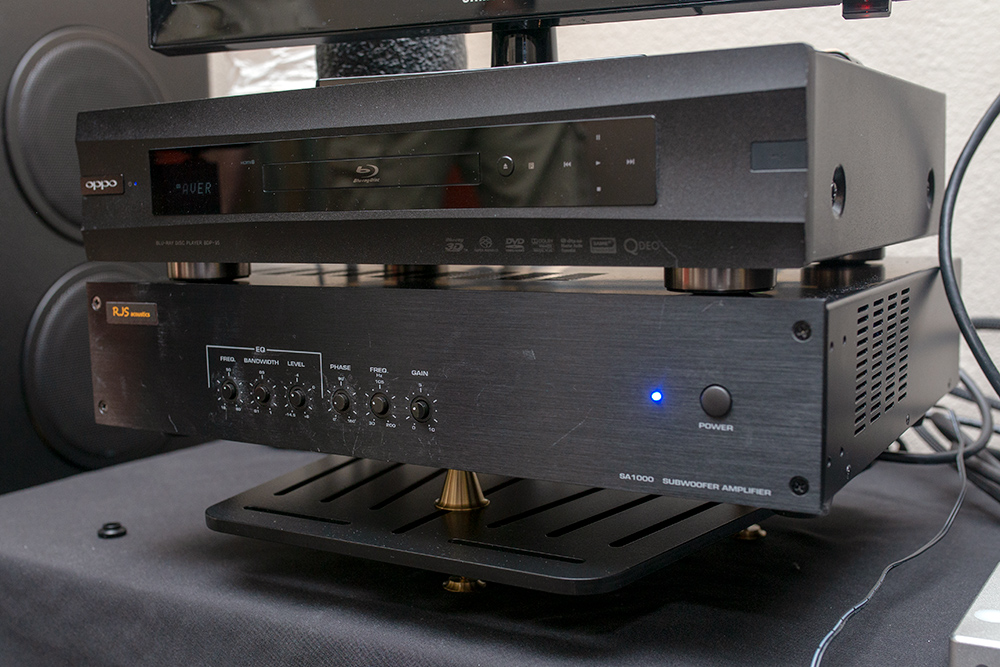 . . . a 1000W external amplifier (below the disc player in photo) that has phase, crossover, and level controls, as well as a parametric equalizer. The total price: $5750. 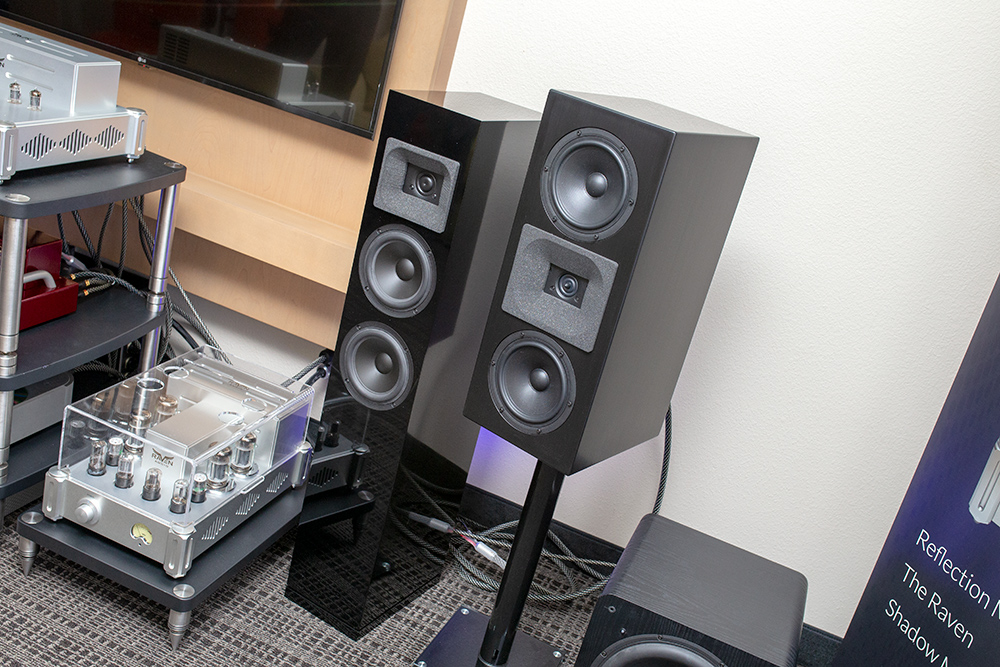 Texas-based Raven Audio is another company that I never knew existed before attending this show, though it’s been around since 2010. The company had a boatload of electronics in its room, and even some prototype speakers shown in the photo above, so I could’ve covered any number of things. But when I kept returning to the room, what drew my eyes most was . . . 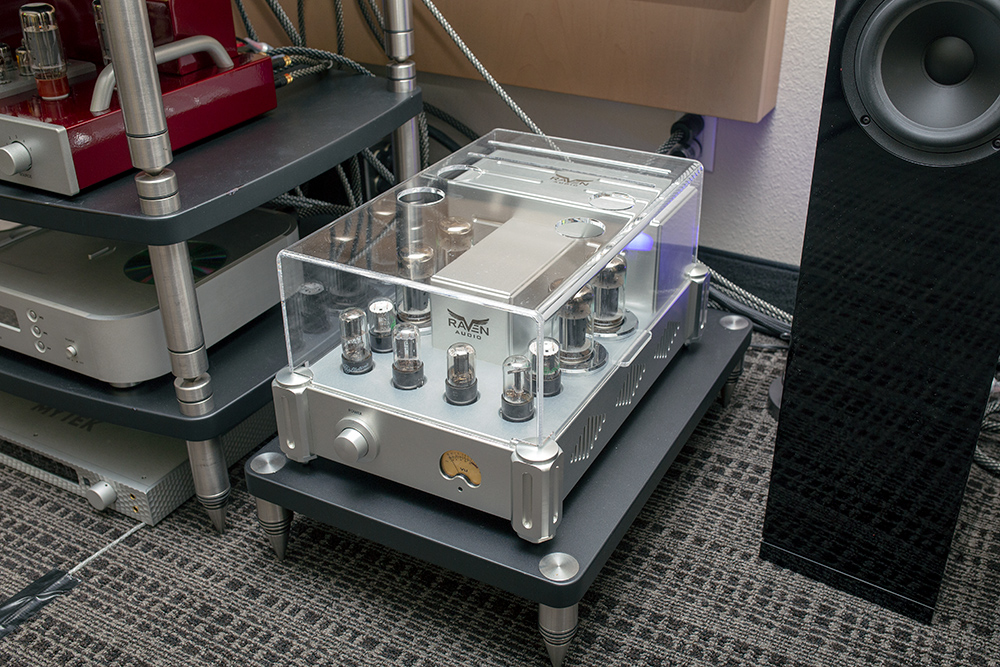 . . . the Silhouette Mk3 monoblock amplifier, priced at $25,995 per pair. It’s not the company’s top model -- the $49,995-per-pair Shaman is -- but it still looks like a beauty and is handmade in the United States. Using 6550 output tubes, the Silhouette Mk3 is rated to deliver 120W through its 8- or 4-ohm taps. If the Silhouette is too rich for your blood, the company offers stereo power amps starting at $9495 and integrated amps from $2995. Obviously, we need to find out more about them.

Over and out from Florida Audio Expo 2019.