Here’s my second batch of new audio products I saw as one of the handful of press attendees at the 2022 CES in Las Vegas this week. Why so few? Because I found only three major audio companies at CES. In fact, although I expected to see lots of headphone and Bluetooth speaker brands, they bailed, too—the biggest one I saw was Raycon, best known for heavily advertised and relatively cheap true wireless earbuds.

This second post focuses entirely on speakers, with all prices listed in USD. 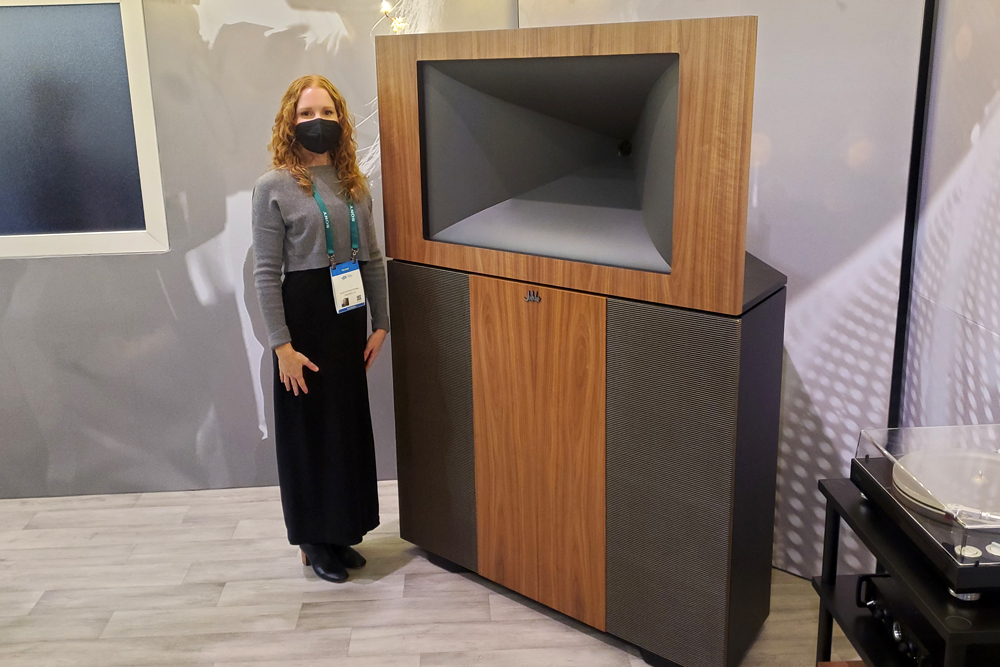 Klipsch was the only big-name audio company I found at the Las Vegas Convention Center. The Jubilee ($34,999 per pair) is the company’s new flagship speaker—and the first new model in its Heritage line since 1985. Company founder Paul Klipsch started working on the Jubilee shortly before he passed away in 2002, in an effort to create an ultimate speaker. It was originally offered for professional cinema use, but the company discovered that audiophiles were buying them, too, so they created this home version with more attractive cosmetics. Inside are two 12″ woofers, and up top is a horn powered by a 5″ compression driver with a 7″ voice coil. The speaker is designed to be biamped, with . . . 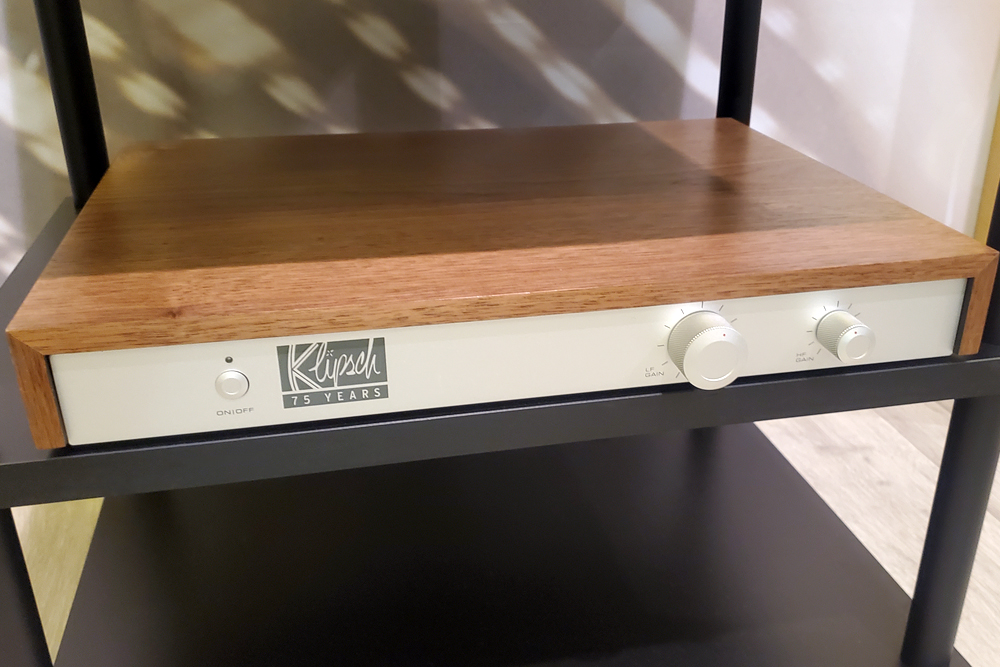 . . . an active crossover separating the bass and midrange/treble frequencies for the different drivers. The crossover is included in the system price. 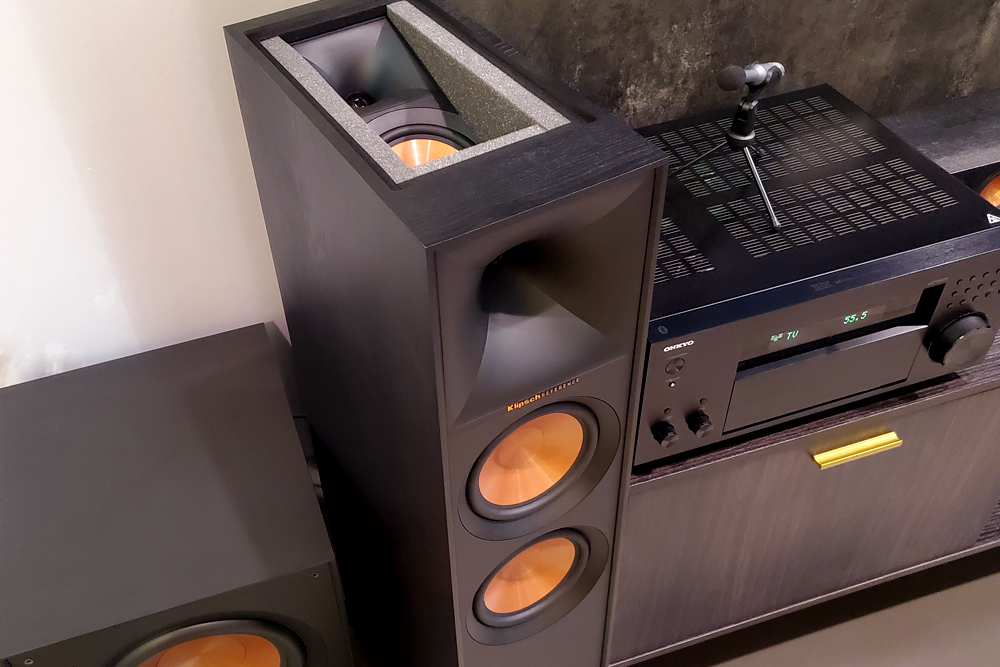 Klipsch is refreshing its Reference line from both cosmetic and engineering standpoints. Like the other models in the line, the R-605FA tower speaker (price TBD) features a new, cleaner look, with no visible fasteners on the front, updated woofers, and more internal ribs for reduced cabinet resonances. Most important to audiophiles, though, will be that Klipsch has substantially revised the design of the . . . 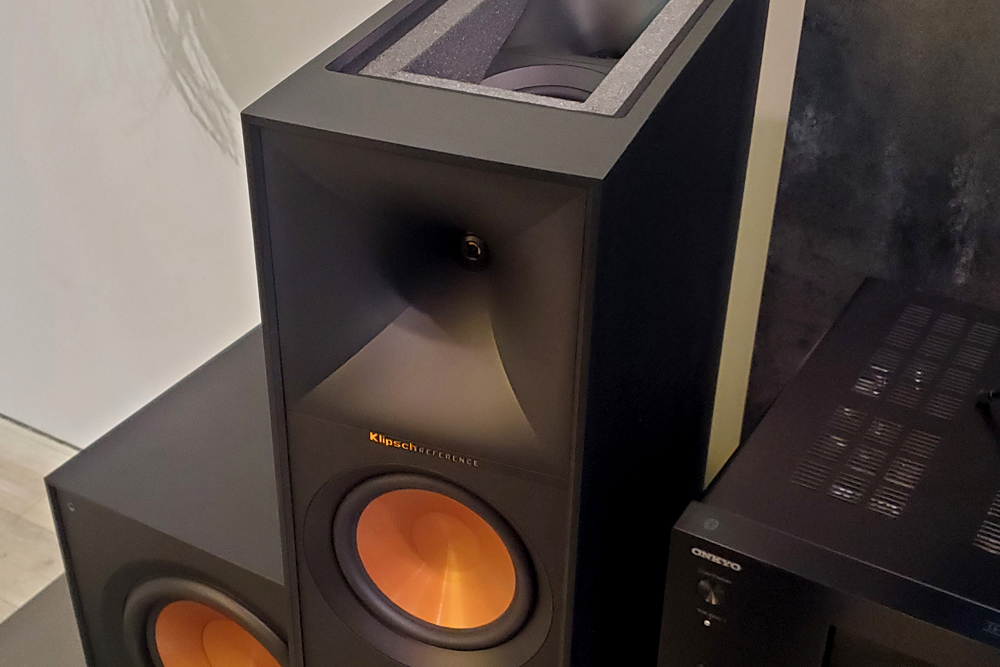 . . . horn tweeter used in the Reference series. It’s wider and taller—a so-called “edge to edge” design that stretches most of the way across the speaker baffle. But it’s also deeper, with steeper angling that Klipsch says delivers cleaner treble response and facilitates better integration with the woofers. 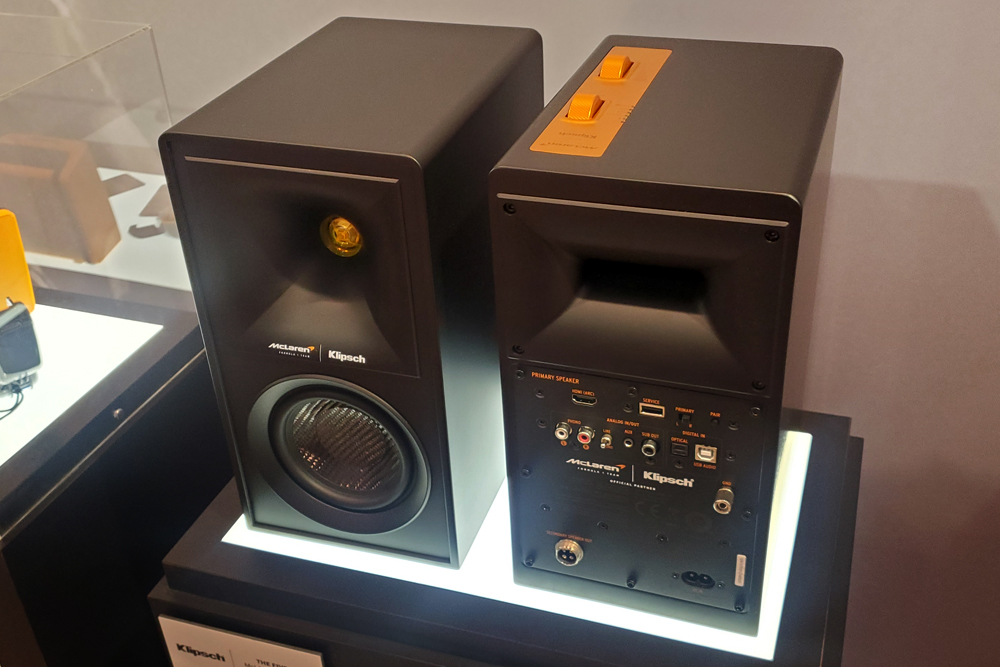 The Klipsch Fives McLaren ($1499) is a special-edition version of the existing Fives active bookshelf speaker system. The McLaren version differs from the original in that it features a carbon-fiber woofer—in keeping with the automotive theme—and its metal components and tweeter are finished in McLaren’s signature Papaya color. Otherwise, the McLaren model is the same, with a 4.5″ woofer and a horn tweeter, 160W total system power, aptX HD Bluetooth support, HDMI and USB connections, and a switchable phono/line RCA stereo input. 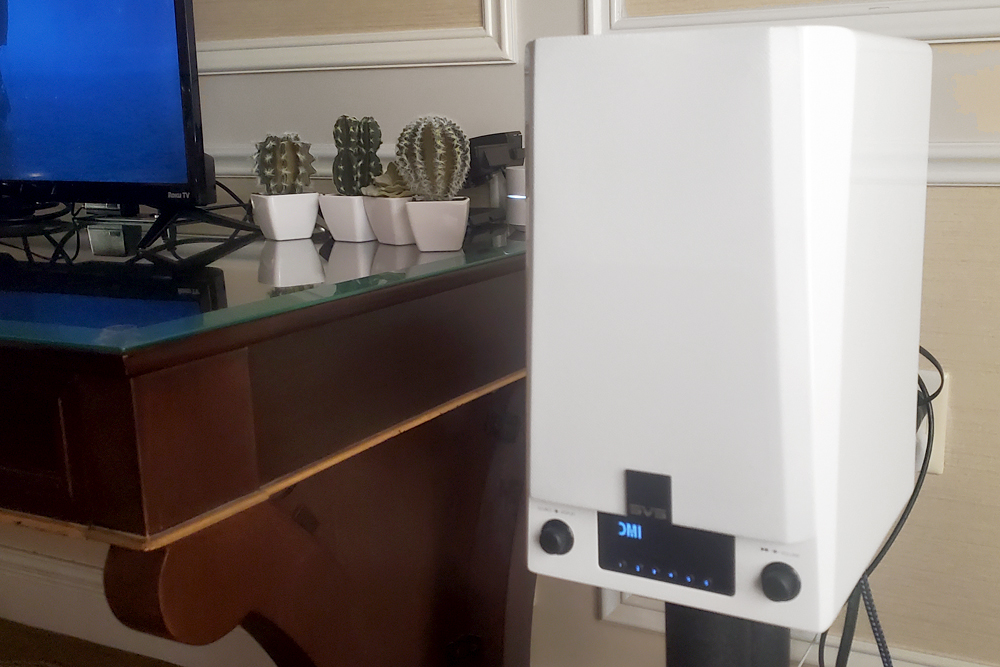 Toward the end of my one day at CES, I ventured up into the tower at the Venetian hotel. The top floors of the tower used to be packed with more than 100 high-end audio companies, so I hoped I might find a few stragglers who hadn’t gotten the memo that CES has abandoned high-end audio, or vice versa, depending on who you ask. Sadly, I found only one audio company there: SVS. But it had cool new stuff, so the elevator ride was worthwhile.

The Prime Wireless Pro (price TBD but estimated at $800 per pair) replaces the Prime Wireless—and according to the company, addresses reviewers’ criticisms of the original. Specifically, the Pro is a bit bigger than the original model, and is tuned to have more bass, which was readily apparent in the demo at the Venetian. It also incorporates a front alphanumeric display that shows the input selected, the volume setting, and the track you’re streaming. In addition to Bluetooth, the Prime Wireless Pro offers Wi-Fi streaming via Apple AirPlay 2, DTS Play-Fi, and Google Chromecast . . . 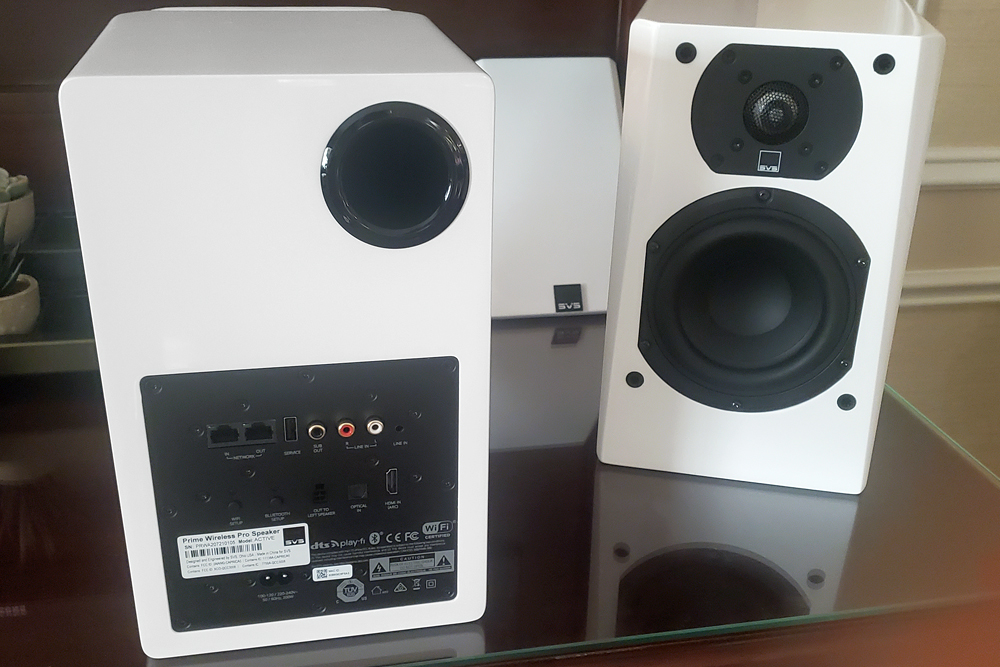 . . . and it also adds an HDMI input, which lets you connect the Wireless Pro to your TV and use it like a soundbar. As with the previous model, it has RCA inputs, a subwoofer output, and an optical digital audio input. Expect to see it in late Q1 or early Q2. 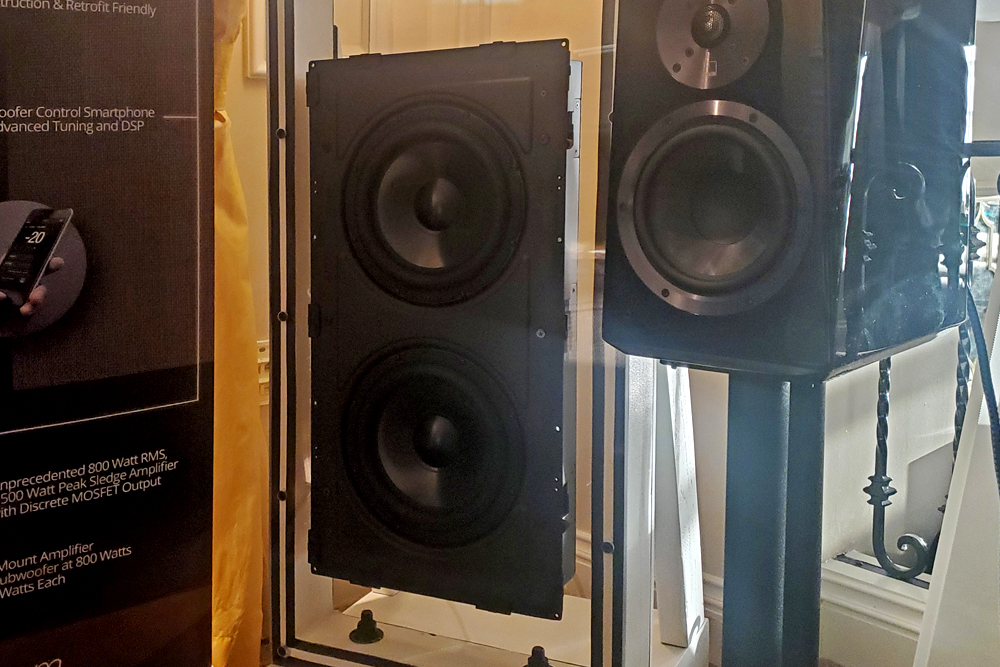 The 3000 in-wall subwoofer builds on the experience SVS gained designing the 3000 Micro subwoofer. It fits into a standard 3.5″ deep, 16″-on-center stud bay, and incorporates two 9″ woofers. A separate amp provides a rated 800W of power, as well as a crossover. I was pretty impressed with the tuneful, powerful bass the 3000 in-wall delivered on Tracy Chapman’s “Fast Car.” A package with one sub and an amp will cost about $1400; adding a second sub will push the price to about $2000.