CES 2018: Brent Finds Too Many Turntables

Considering that the high-end audio exhibits at CES 2018 were almost entirely confined to the 29th floor of Las Vegas’s Venetian hotel, I didn’t expect to find enough new turntables to fill an article. But to my surprise, I probably could have filled a couple of posts with new turntables from the show. Here are my favorites, with all prices in USD. 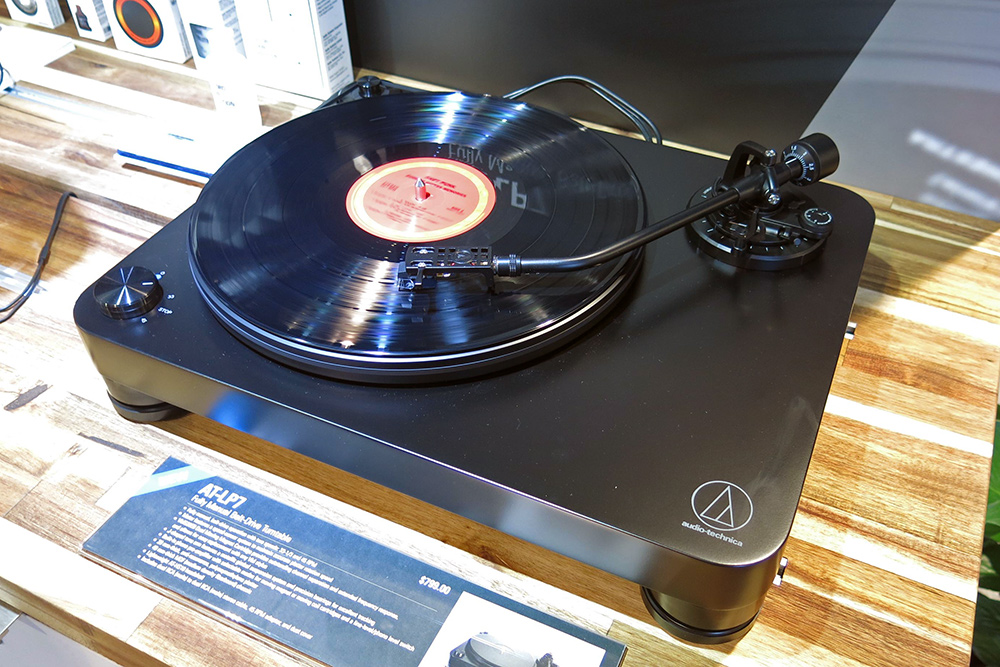 Audio-Technica has a rep as the inexpensive turntable brand audiophiles recommend for non-audiophiles. The AT-LP7 ($799) is Audio-Technica’s first real stab at making a high-end turntable. It’s a fully manual belt-drive model with a built-in preamp that works with moving-magnet (MM) and moving-coil (MC) cartridges. An Audio-Technica VM520EB MM cartridge is factory installed. 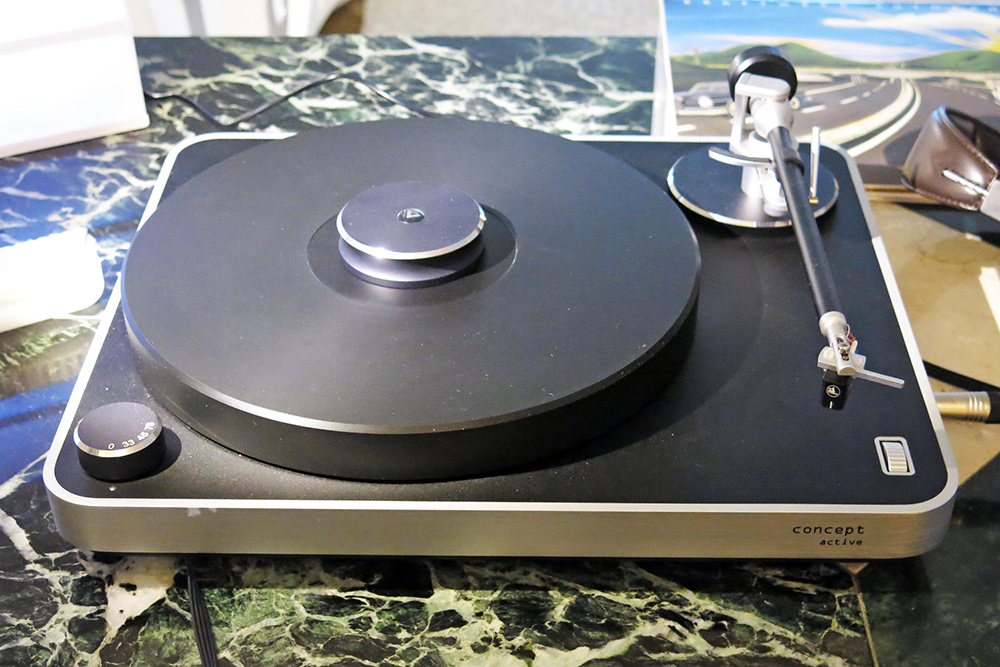 Clearaudio has added an option for its Concept turntable line called Active. It includes an internal phono stage that accommodates MM and MC cartridges, plus a headphone amp with a volume control. The Active option adds $800 to the price of the turntable, making the total price $2600 to $4400 depending on which of the Concept turntables you choose. 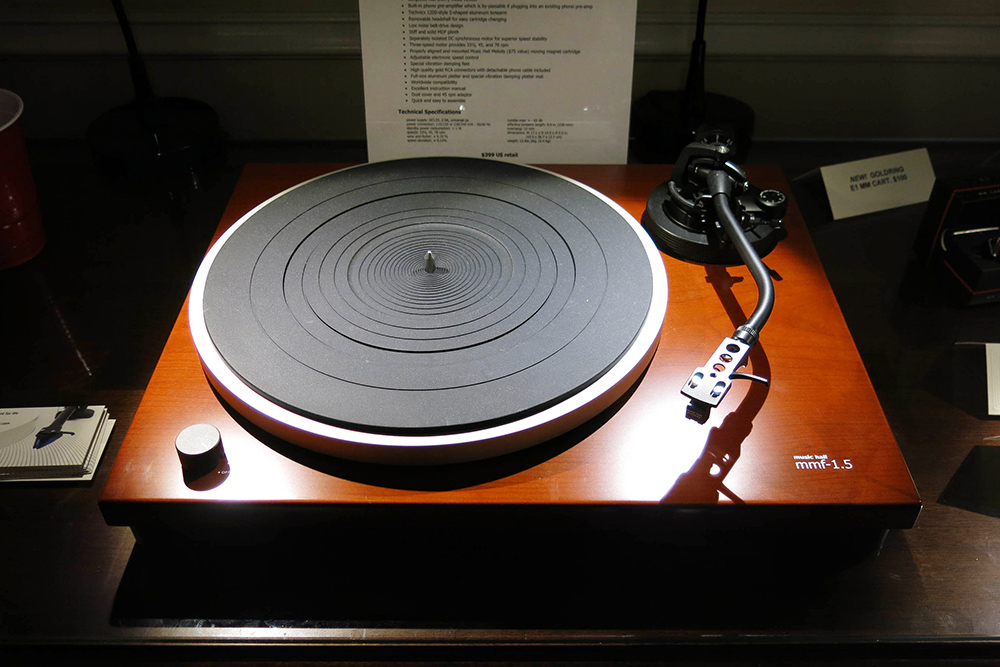 With real cherrywood covering its MDF plinth, Music Hall’s MMF-1.5 ($399) looks quite handsome for an under-$500 turntable. It plays 33-1/3, 45, and 78rpm records, has a built-in MM phono preamp, and includes an electronic speed control that can be precisely locked once it’s set (although Music Hall says it’s accurately preset at the factory). The tonearm is basically the same as the one fitted to the Technics SL-1200, and it comes with a Music Hall Melody MM cartridge installed. 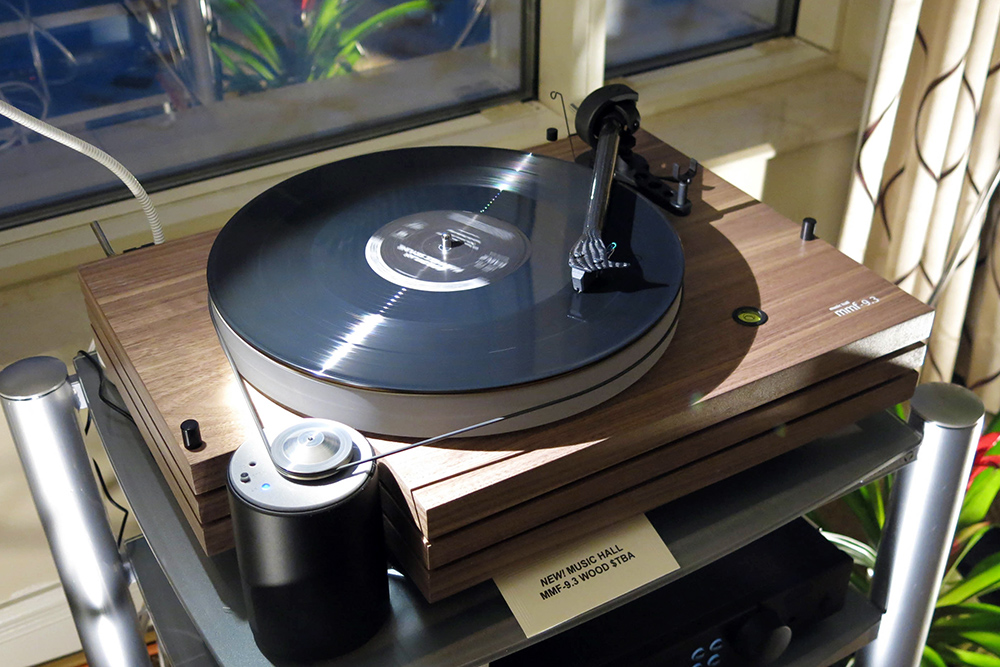 Even at a projected price of around $2700, Music Hall’s MMF-9.3 Wood seemed like one of the best turntable values at CES 2018. Most interesting is its triple-plinth design, with the bottom plinth holding the feet, the top plinth holding the platter and tonearm, and all plinths separated by vibration-damping Sorbothane. The motor is housed in a separate unit with a vibration-damping puck on the bottom. The one-piece carbon-fiber arm will come fitted with a cartridge in the $750 range (Music Hall hasn’t selected it yet), and will also be available with no cartridge installed. 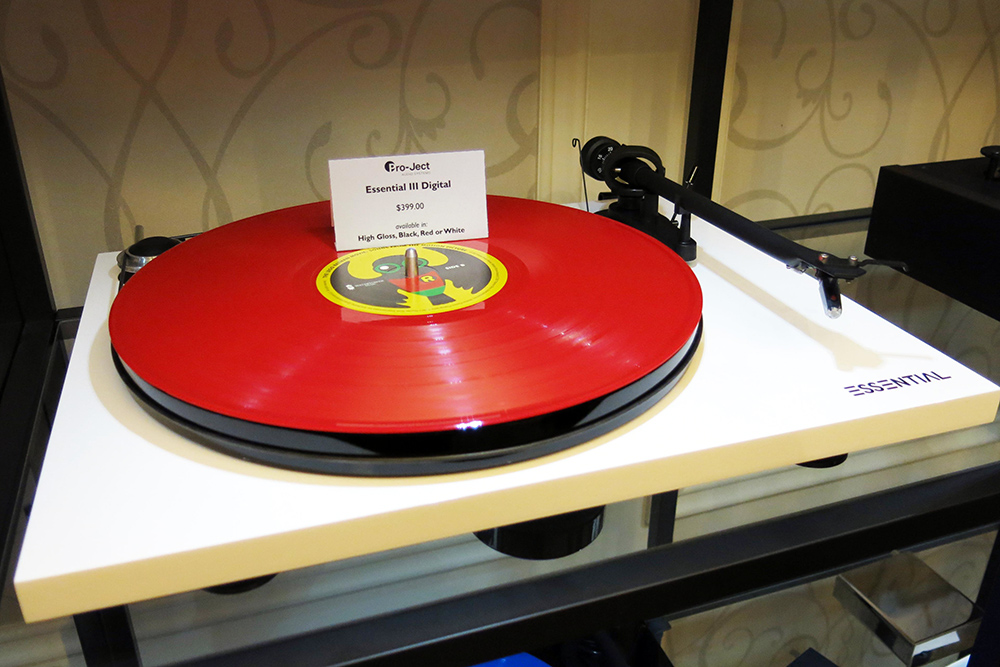 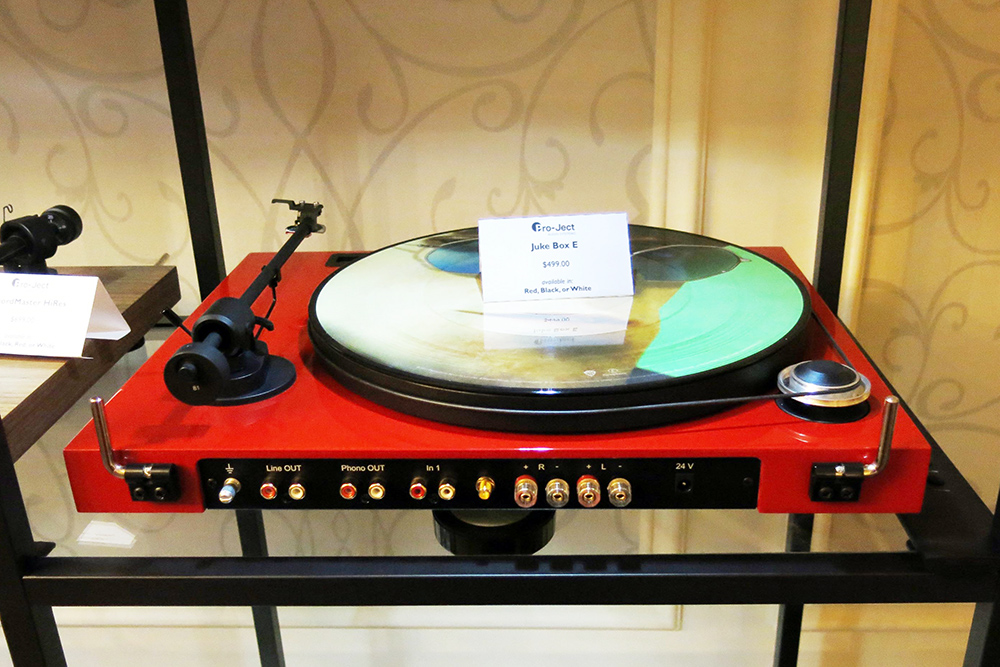 Easily the most innovative turntable at CES 2018 was Pro-Ject’s Juke Box E ($499), which incorporates a phono preamp and a 25Wpc class-D amp (the same as in the company’s $275 Stereo Box S2 amp). Just plug in a pair of speakers and you have a full vinyl playback system. It has line-level and direct phono outs for connecting to external gear, and it also includes a Bluetooth transmitter to beam sounds to Bluetooth headphones and speakers. An Ortofon OM-5 cartridge is factory-installed, and the Juke Box E is available in red, black, or white. 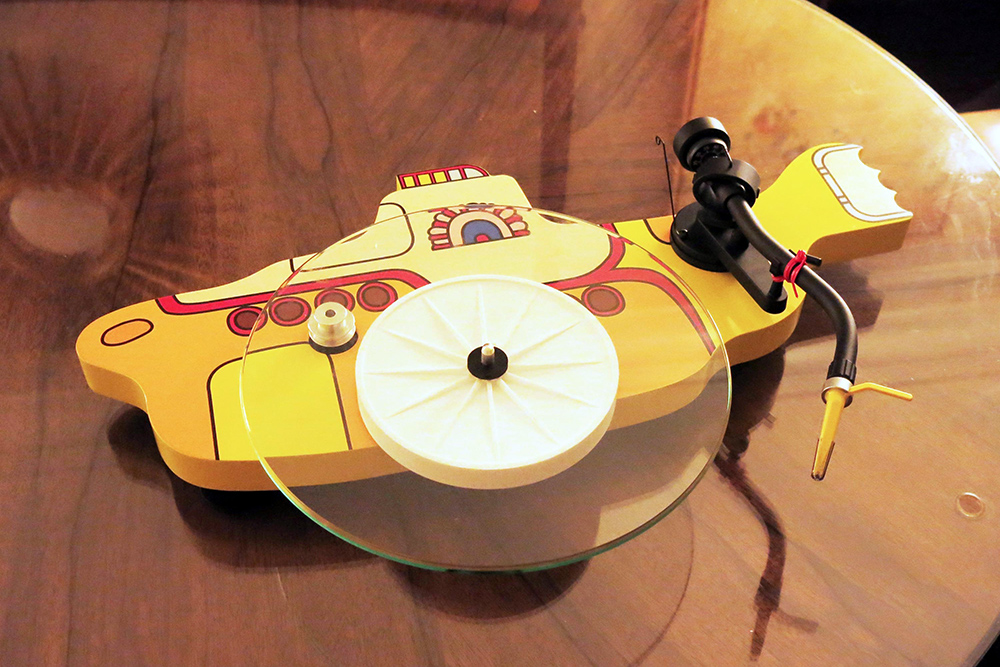 Pro-Ject also showed this whimsical turntable that commemorates the Beatles’ Yellow Submarine album. It’s a prototype and little information was available, but it’s expected to sell for under $500, and it sports a custom yellow P-mount cartridge Ortofon made especially for this turntable. 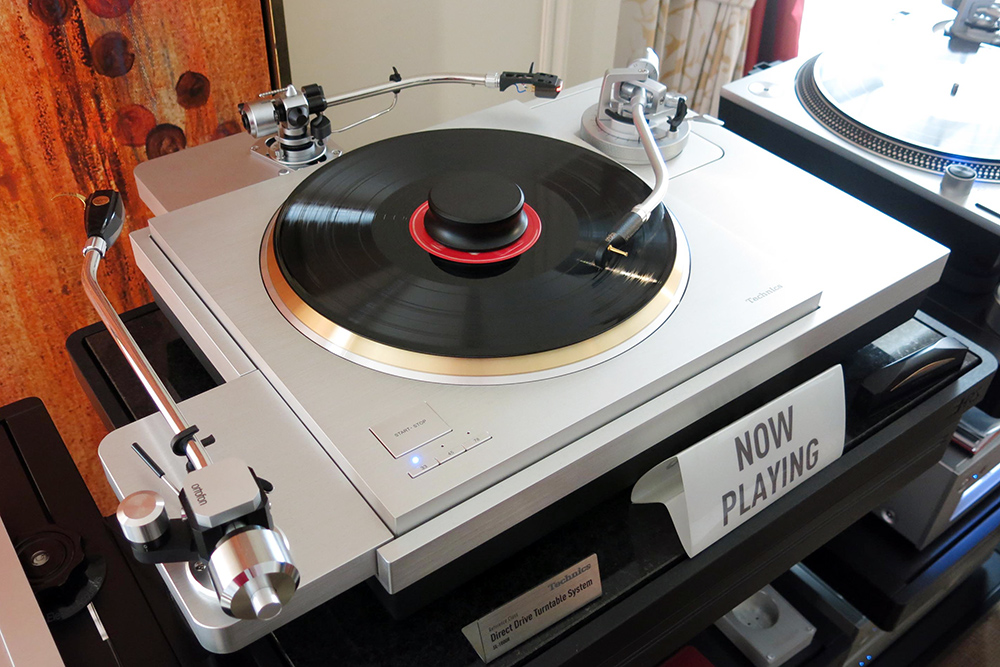 Technics kicked up some waves a couple of years ago when it reintroduced its classic SL-1200 direct-drive turntable, at a price of $4000. Now it’s relaunching its SP-10, which was the first direct-drive turntable, as a high-end model starting at $10,000. The new model, which is called the SP-10R (not shown), does not include a tonearm. A more advanced model, the $20,000 SL-1000R (shown in photo above), includes a magnesium tonearm as well as platforms for two additional tonearms, allowing vinyl enthusiasts to use multiple cartridges, different tonearm lengths, etc. A separate control box allows speed adjustments in increments of 0.01rpm.