Here’s the final segment of my three-part coverage of new speakers from last week’s CEDIA Expo, which took place at the Colorado Convention Center in Denver. While conventional freestanding speakers aren’t the focus at the CEDIA Expo, I explore several new models below -- as well as one of the weirdest in-wall speakers I’ve ever seen. All prices in USD. 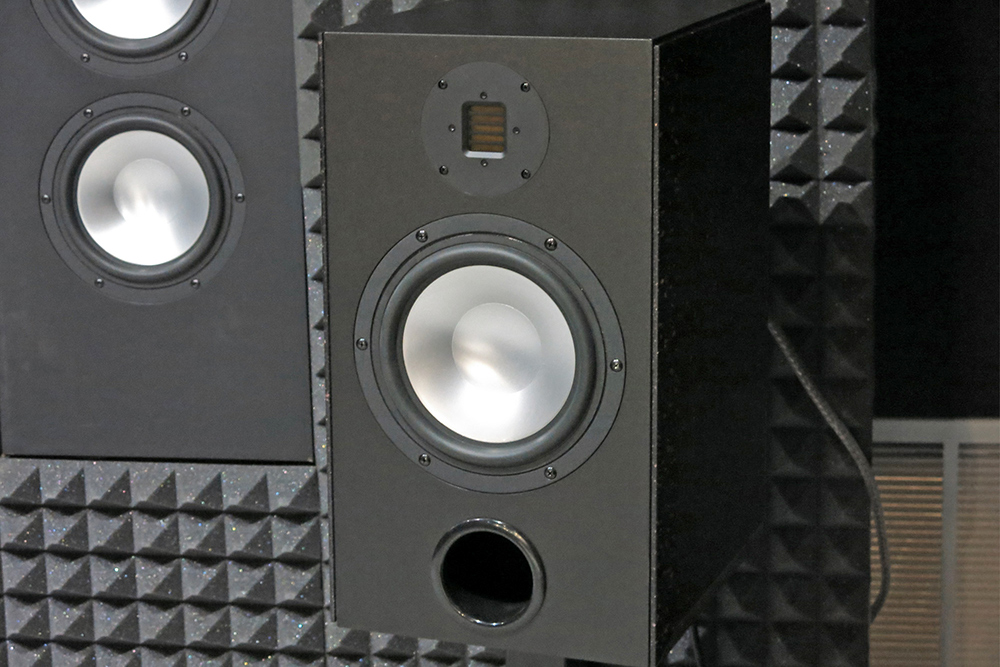 RBH Sound’s PM-8 ($1949.95 each) represents the company’s effort to create a speaker that can be used as a super-accurate recording monitor or as a high-end powered bookshelf speaker for audiophiles. The Utah-built speaker has an 8" woofer powered by a 250W internal amp, and an AMT tweeter powered by a 150W amp. Its internal digital signal processor includes presets for various tone settings (flat, treble down, treble up, etc.), as well as a setting that optimizes the speaker for use as a nearfield recording monitor. RCA and XLR inputs are offered on the rear panel. The side panels are made from your choice of a solid-surfacing material (similar to Corian) or a composite material called PaperStone. 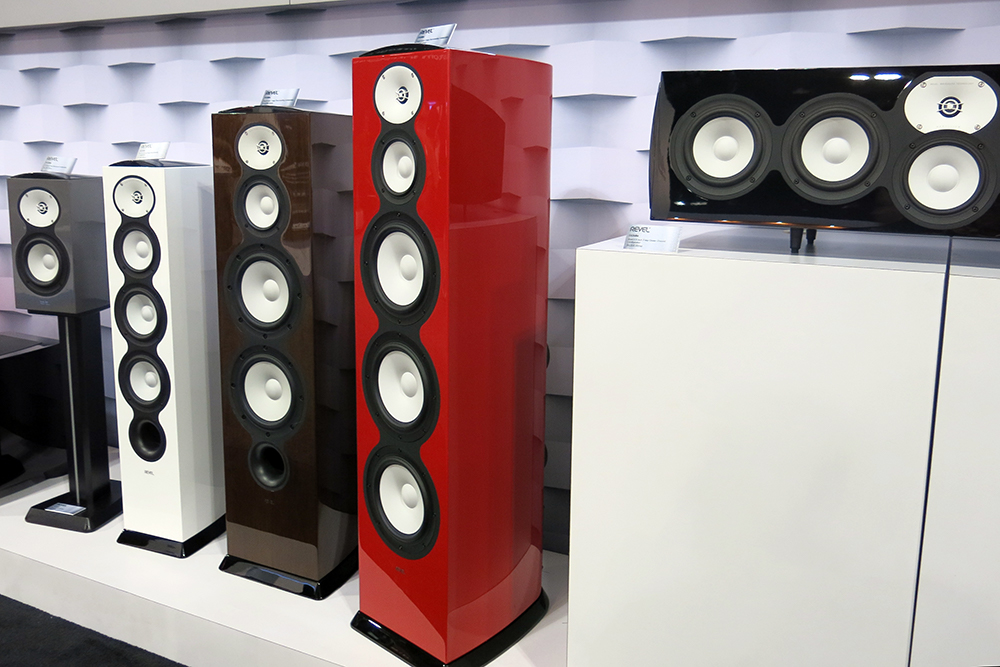 The CEDIA Expo gave me a chance to get a good look at Revel’s expansion of its PerformaBe line; at the Rocky Mountain Audio Fest last week, the tiny Revel room was too crowded for me to squeeze into. The line has now expanded from two to five models. The new models are the F226Be ($7000/pair, second from left, in white), with two 6.5" woofers, a 5.25" midrange, and a 1" beryllium-dome tweeter; the F328Be ($16,000/pair, second from right, in red), with three 8" woofers and the same size midrange and tweeter drivers; and the C426Be center speaker ($4500 each, far right), with four 6.5" woofers and the same size midrange and tweeter drivers. The F328Be’s tweeter is similar in ways to the others, but has been re-engineered with a larger motor structure and a new waveguide. 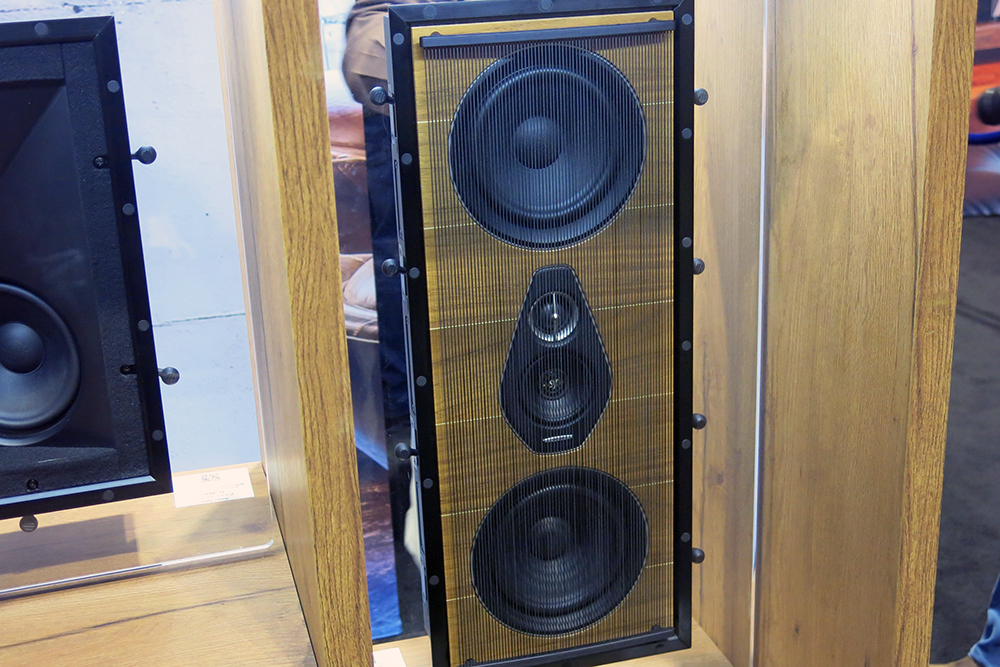 I wasn’t sure how to describe Sonus Faber’s Palladio PL-664 ($2500 each) in-wall speaker, but “arresting” seems an appropriate adjective. The PL-664’s tightly grouped array of a 1.1" tweeter and 3.1" midrange recalls many Sonus Faber tower speakers, as does the “rubber string” grille that has long been used on the company’s top models. (A conventional perforated-steel grille is also available.) Two 6.5" woofers handle the bass. It’s also available as a horizontally configured center speaker, with the midrange/tweeter array turned 90 degrees. 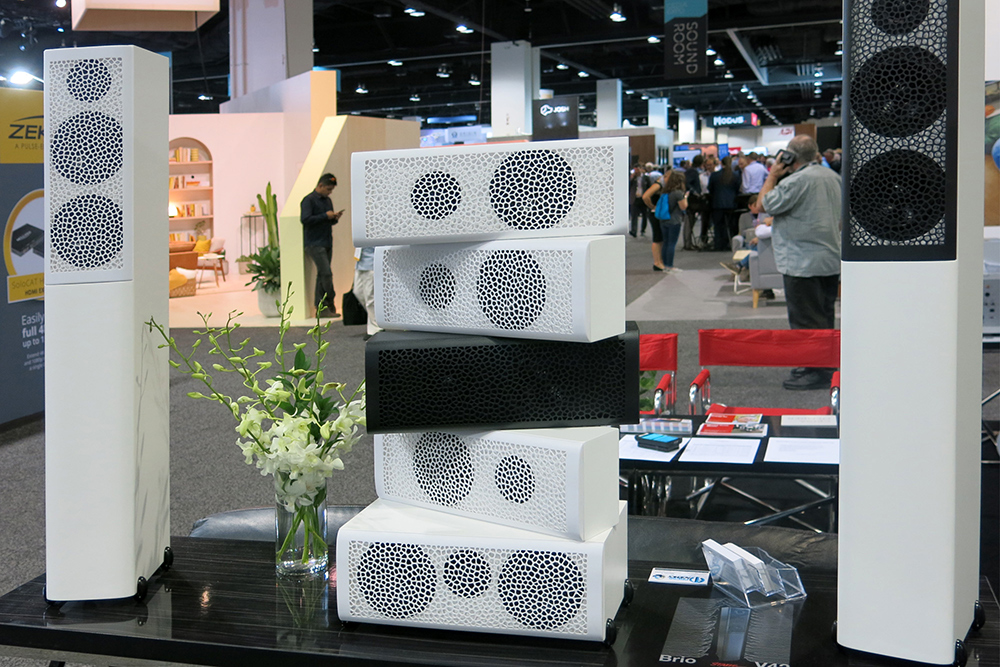 Starke Sound’s industrial designer Scott DeLoache took the look of the grilles on the company’s new compact speakers from Voronoi patterns -- mathematically derived geometric patterns found naturally in such places as cell structures, giraffe skin, and cracked mud. According to DeLoache, the holes are big enough to be acoustically transparent, yet small enough to protect the 4.5" woofers and 2" tweeters. The tower speaker is the V41 ($799/pair), the bookshelf speaker is the V42 ($249/pair), and the center speaker is the V41C ($399 each). 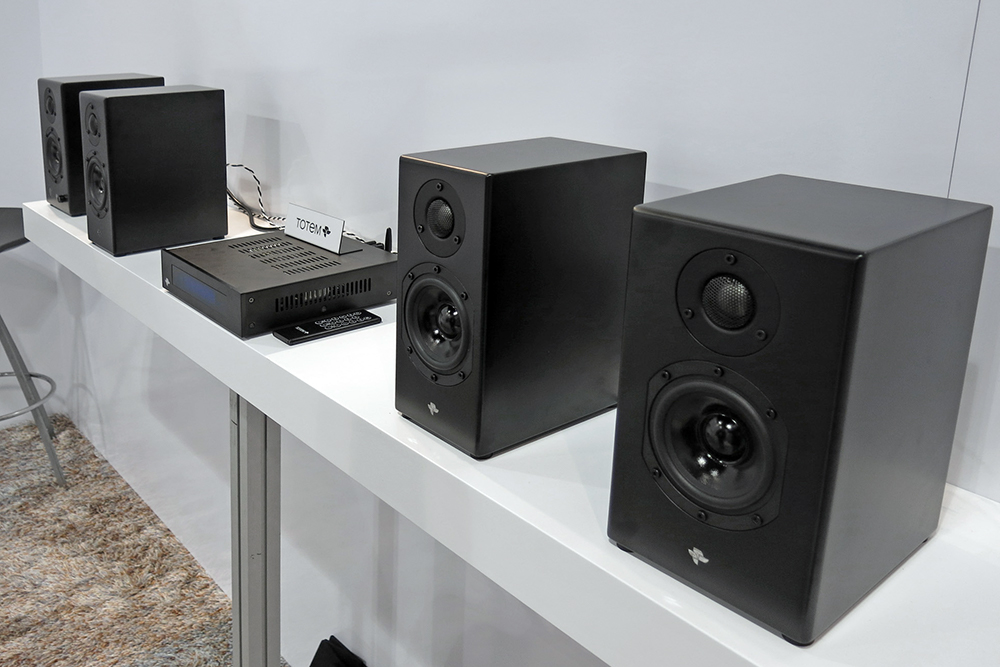 Totem Acoustic must have done pretty well with the Kin Play powered speakers launched at last year’s CEDIA Expo, because the company has added two new speaker models and an amp to the line. The chunkier speakers on the outside are the Kin Play Minis ($850/pair). The Mini is essentially a smaller version of the Kin Play -- it has a 4" woofer, a 1" tweeter, and a 70W internal amp. The slimmer speakers on the inside are the Kin Monitors ($699/pair), which have the same drivers as the Minis but are passive, so they need an amp. Fittingly, in the middle is the Kin Amp ($699), a stereo 100Wpc amp with a touchscreen display. The Kin Play, Kin Play Mini, and Kin Amp feature aptX HD Bluetooth, a line input switchable to MM phono, and analog and TosLink (optical) inputs.