It’s safe to say everyone attending the 2016 CEDIA Expo -- a trade show that focuses on custom-installed A/V and home automation -- knows that traditional wired audio systems and home-theater systems are playing a shrinking role in most people’s lives. So it’s no surprise that the Expo saw the introduction of several new wireless music systems and soundbars -- products designed primarily for convenience, but that can deliver impressive sound quality if they’re designed for performance rather than the lowest possible price.

I heard several such products at the Expo. None were the type you’d find for a low-three-figures price at a big-box store; all were built with quality components and carefully tuned for the best possible sound from their form factor. The most interesting soundbars and wireless speakers I saw and heard are profiled below, with all prices stated in USD. 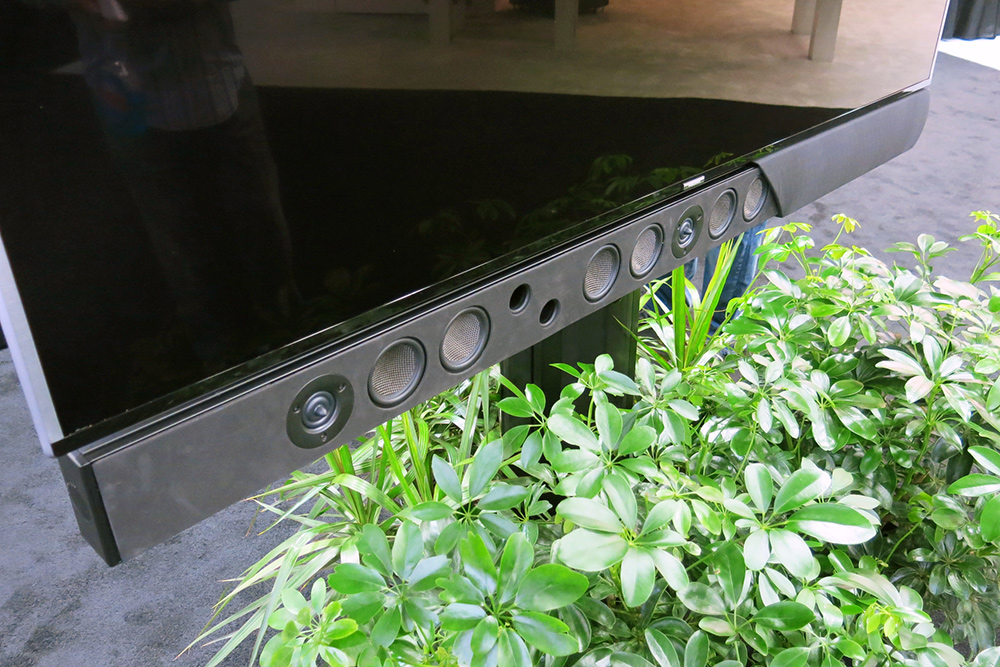 Artison specializes in high-quality passive speaker systems that attach to flat-panel TVs. The Studio 65 is the company’s largest soundbar yet, packed with three tweeters and eight 3.5” midrange drivers. The cost with bracket and grille is $2999. You add the amplification -- which might be Artison’s new Backpack P5, a slim $1199 home-theater amp that includes Dolby Digital and DTS, plus 100Wpc amps for the three front channels and 50Wpc amps for two surround channels. 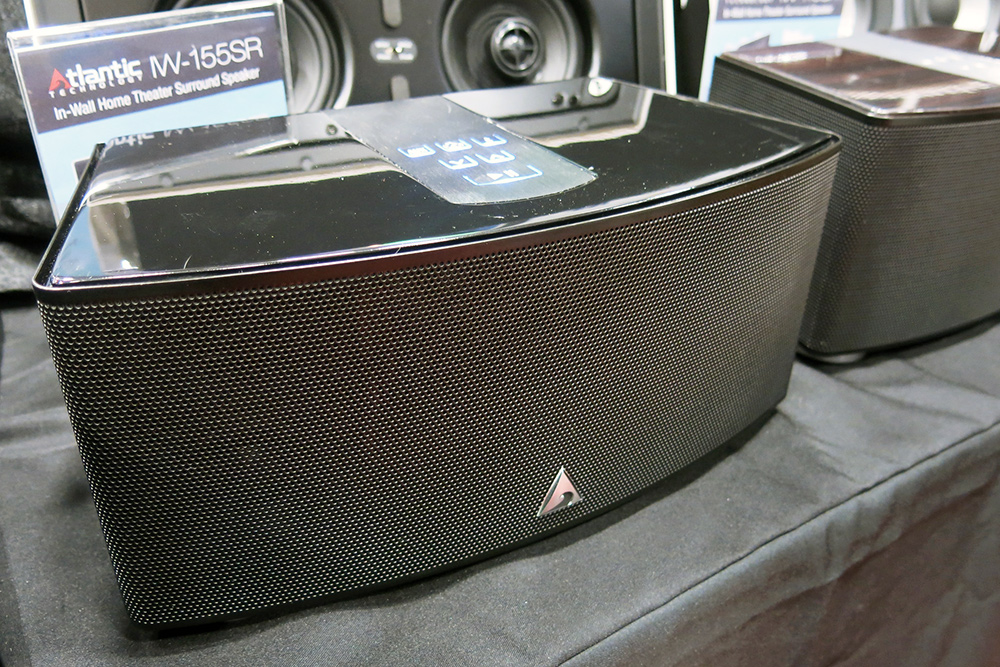 The GateCrasher by Atlantic Technology is basically a high-quality 2.1-channel sound system built into a wireless speaker. The one-piece unit incorporates a 4.5” woofer in the center with a passive radiator on the bottom, flanked by built-in stereo two-way speakers, each with a 3” midrange and a 1” tweeter. Current plans are to include Bluetooth, Google Cast, iHeartRadio, Pandora, and Spotify, although the Internet streaming and wireless capabilities haven’t been finalized yet. Availability is expected in spring 2017 at a projected price of $399. 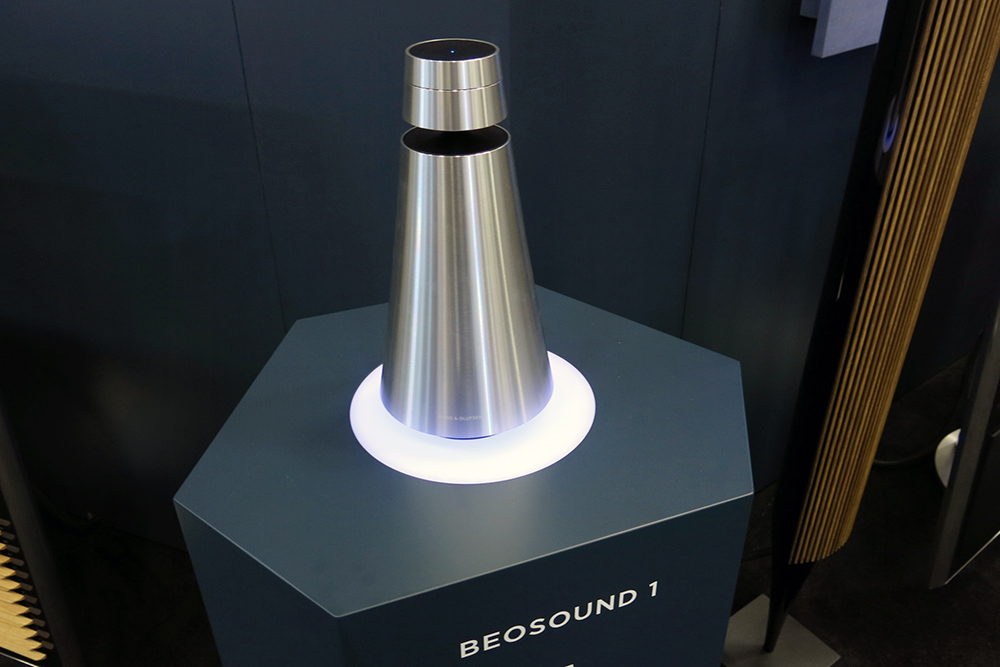 At $1495, Bang & Olufsen’s BeoSound 1 is pricey, but you have to admit it’s pretty. It uses a 4” downfiring woofer on bottom, with a 1.25” full-range driver near the top firing into an acoustic lens for claimed 360-degree dispersion. Surprisingly, it’s portable -- the onboard battery is rated at 16 hours run time, and you can safely grab it by the slot near the top. The top functions as a volume control. It incorporates AirPlay, Bluetooth, Google Cast, and B&O’s own BeoLink multiroom technology. 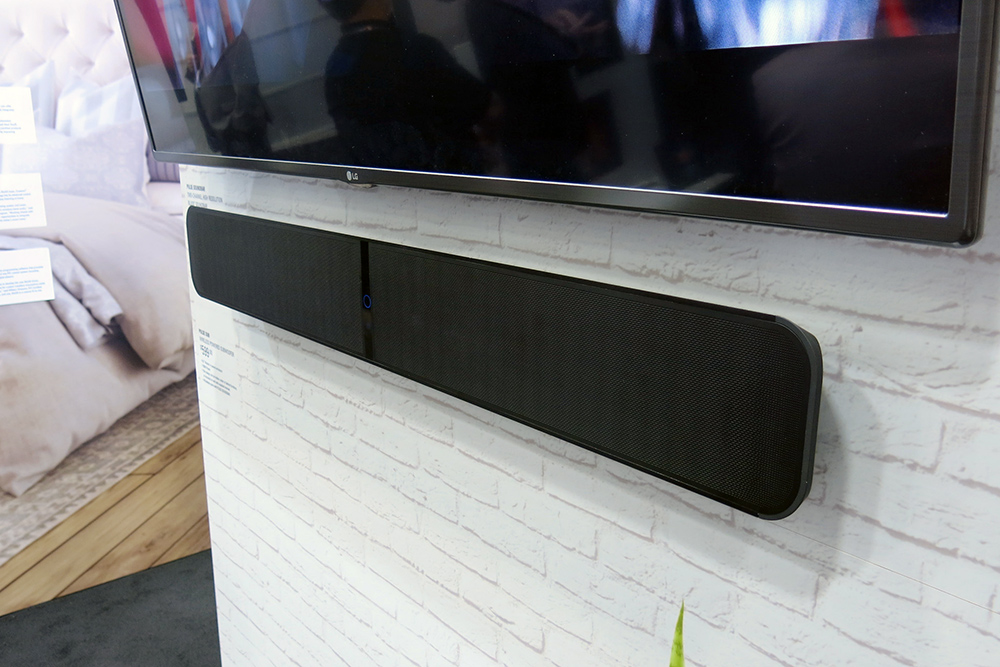 CEDIA Expo 2016 marked a huge expansion of Bluesound, the multiroom audio system created by Lenbrook, parent company of NAD and PSB. The $999 Bluesound Pulse soundbar of course includes BluOS (the Bluesound operating system) and also includes MQA capability. The speaker section was designed by PSB founder and chief engineer Paul Barton, and is said to deliver sound from 70Hz to 20kHz with ±1dB accuracy. If you want more bass, add the $599 Pulse subwoofer. The soundbar can be mounted on-wall, on an included “kickstand” for table use, or on an optional stand that accommodates TVs up to 70” in size. 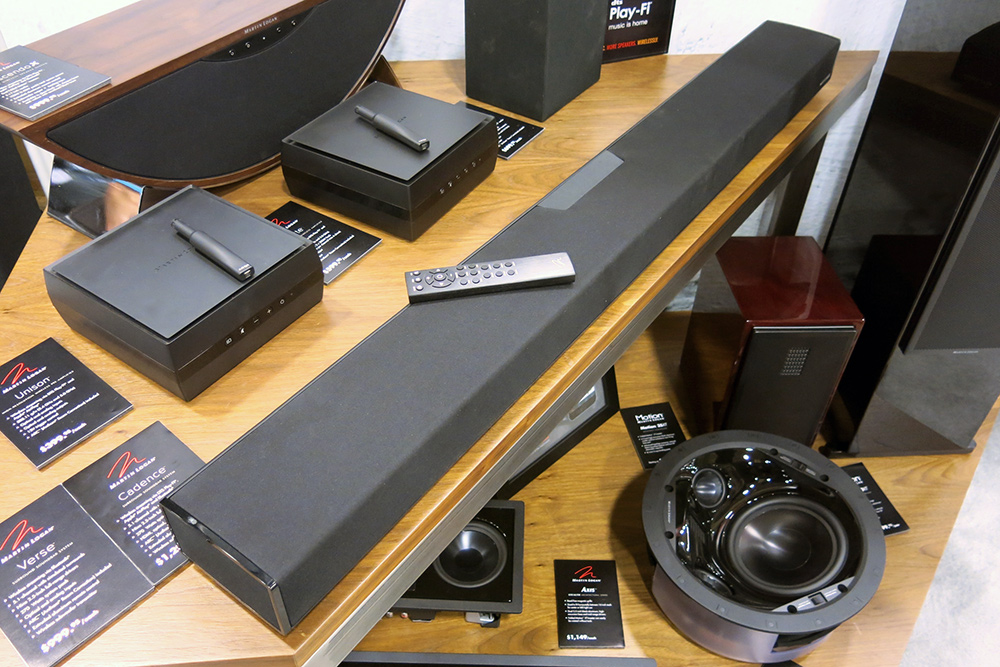 MartinLogan’s $999 Versa and $1299 Cadence soundbars are acoustically the same; the difference is in the features. Both incorporate nine 2.5” drivers. The Versa includes optical and coaxial digital inputs, analog inputs and Bluetooth, plus a built-in wireless transmitter that works not only with MartinLogan wireless subs but with any subs using the included wireless receiver. The Cadence adds HDMI input and DTS Play-Fi. 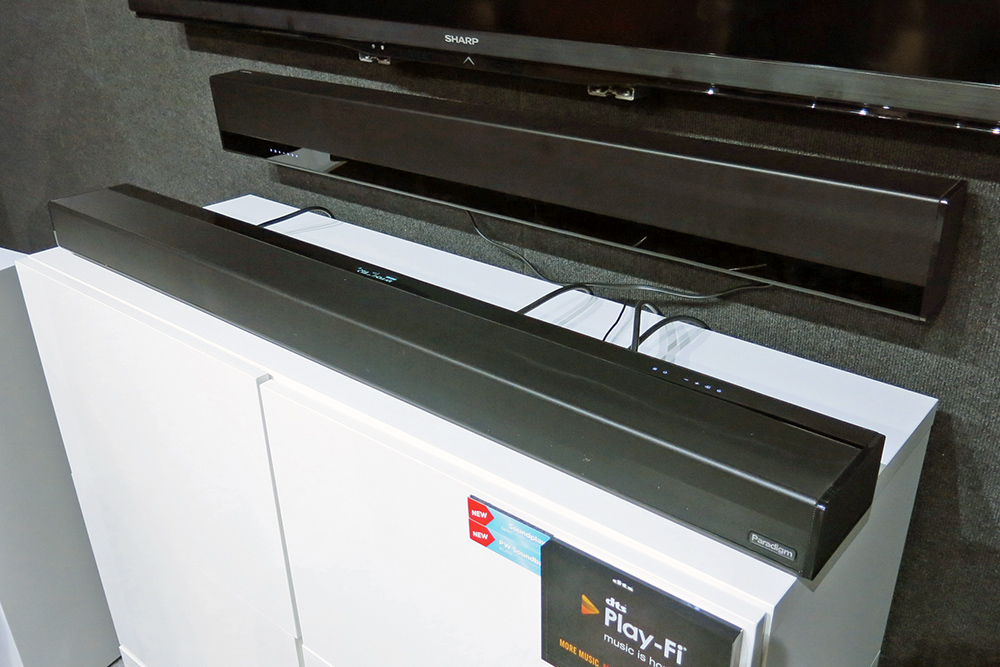 The $1299 PW (“premium wireless”) soundbar from Paradigm shown here incorporates nine 2.5” drivers, includes HDMI and DTS Play-Fi, and can connect wirelessly to a subwoofer. The $899 Soundplay soundbar is acoustically the same, but omits Play-Fi and HDMI inputs. If this seems like a repeat of the specs from the MartinLogan soundbars -- well, both brands share the same parent company, so infer what you will. 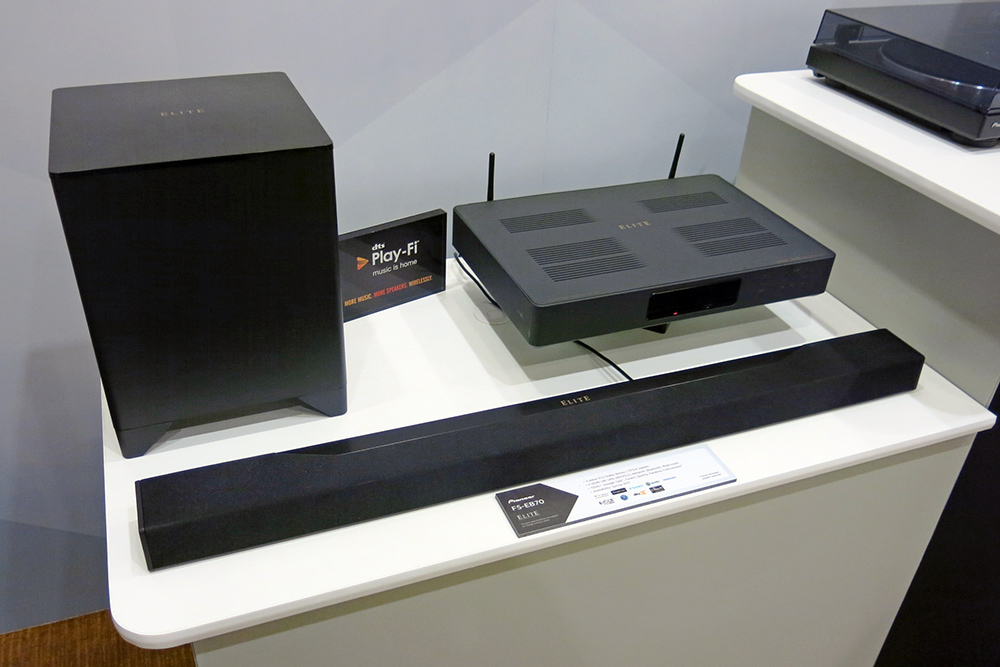 The lights-off demo of the Pioneer Elite FS-EB70 soundbar was already running when I walked in, and I never realized I was hearing a soundbar until the lights went up. The soundbar has upward-firing Dolby Atmos-enabled drivers, and it's compatible with DTS:X, too. The central control unit has four HDMI inputs and will include Pandora, Spotify, TuneIn Radio, and DTS Play-Fi when it ships in spring 2017; Google Cast, Tidal, and FireConnect are planned as a later software update. An 8” sub is included. Price hasn’t been set yet. 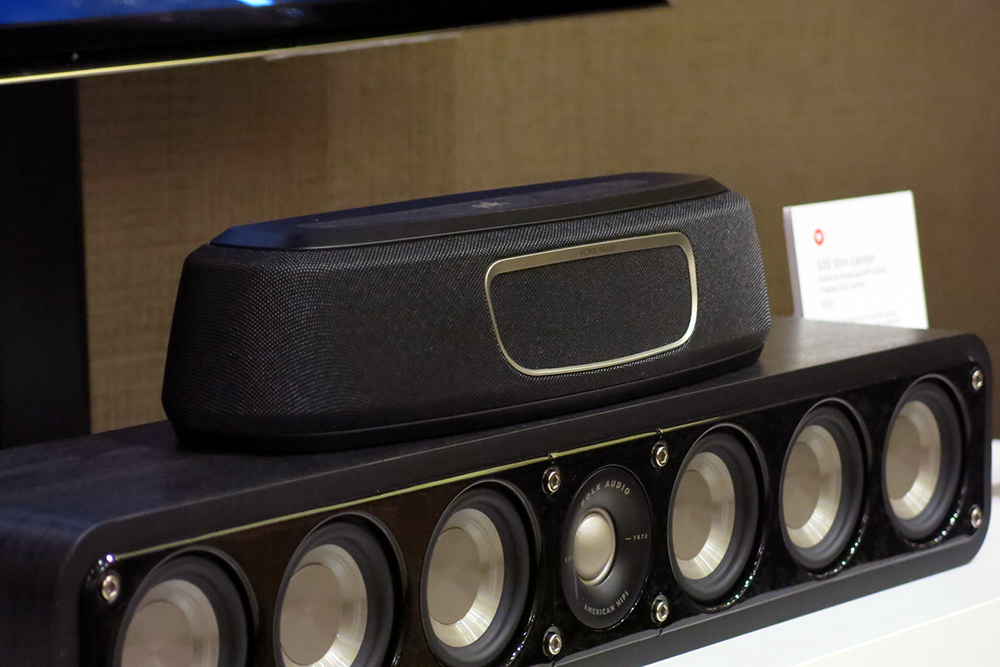 When you’re in the press, people at a show always ask, “What’s the best thing you saw?” I kept coming back to Polk Audio’s remarkable little $299 Magnifi Mini soundbar, shown here atop Polk’s C35 center speaker. It measures just 14” across, so it’s easy to plop down in front of a TV or mount on a wall. The bar houses four 2.25” midranges and two 0.5” tweeters, plus Polk’s SDA crosstalk-cancellation technology for a bigger soundstage than a 14” bar might normally muster. It comes with a wireless sub that’s much better built than the plastic hunks o’ junk that come with most soundbars, packing a 6.5” downfiring woofer in a reasonably stiff, ported enclosure. The bar has the usual analog and digital inputs, plus HDMI, Bluetooth, and Google Cast. 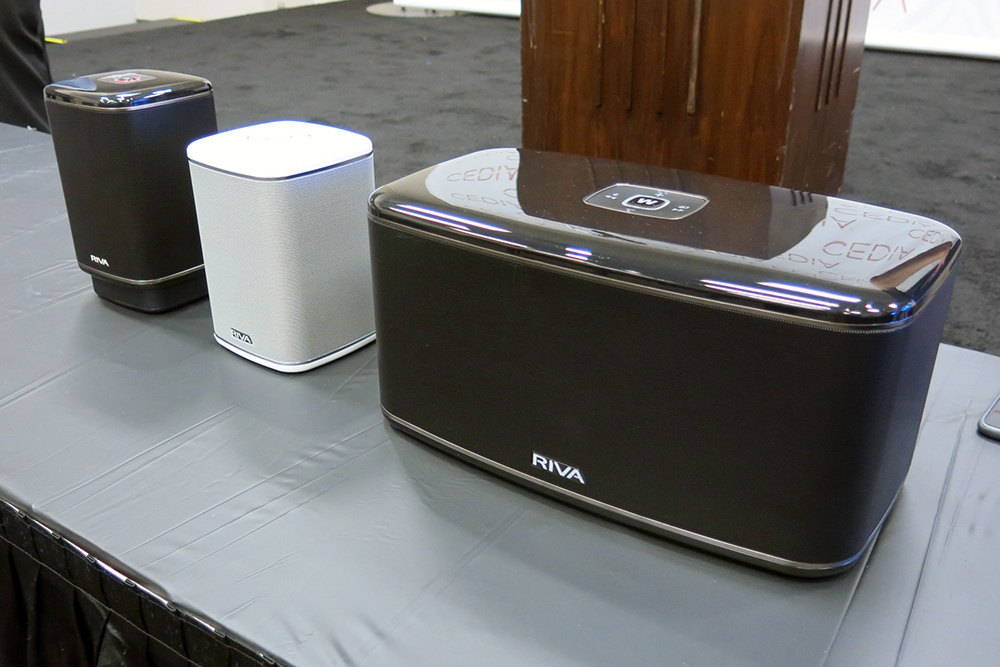 Riva’s Turbo X is widely regarded as among the best-sounding portable Bluetooth speakers, so the company’s introduction of a new Sonos-style wireless multiroom system met with some enthusiasm at the CEDIA Expo. The WAND (Wireless Audio Network Design) series includes the $249 Arena (the two speakers at left) and the $499 Festival (at right). Both include AirPlay and Bluetooth, and both can be voice-controlled. You can use Riva’s own app for playback control, or use the native apps of streaming services such as Pandora and Spotify. The Arena is splashproof, and can be made portable with the addition of an optional battery pack rated at 16 hours run time. You can use as many as 32 WAND speakers in a multiroom system, and built-in ad hoc networking lets you use multiple WAND speakers together even when you’re not in range of your Wi-Fi network. The system can also retransmit a Bluetooth signal received by one speaker so it comes through other speakers in the system. Both are expected to ship in late November.