So much of the focus at the annual CEDIA Expo is on home-theater sound. Naturally, there are always interesting new subwoofers on display, from state-of-the-art slab shakers to stealthy models designed to be tucked into a corner or built into a wall. Here are some of the most interesting new subwoofers I saw (and in some cases, heard) at the CEDIA Expo. All prices in USD. 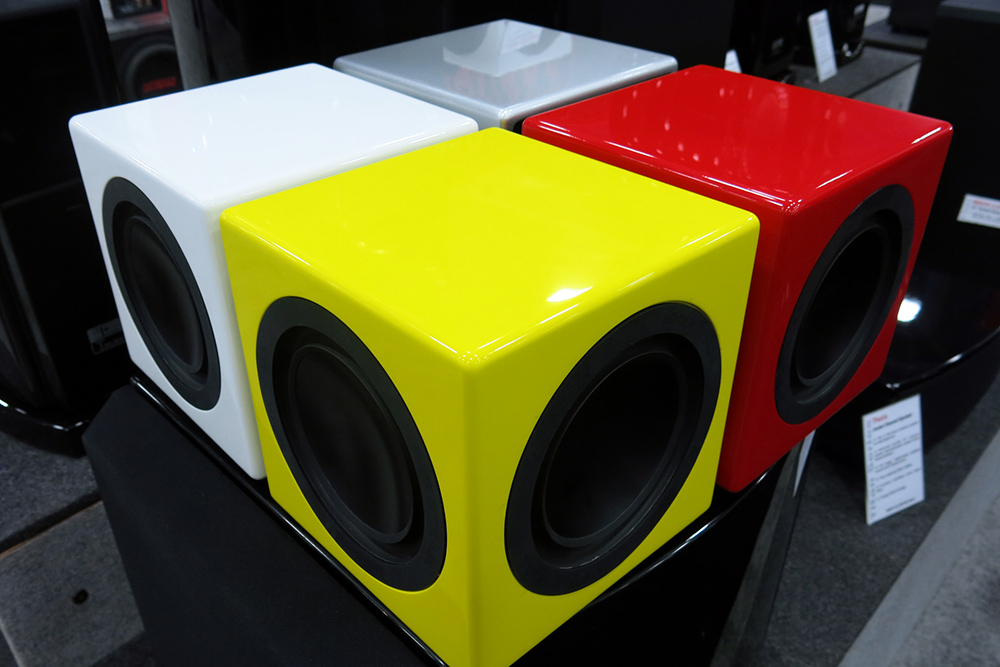 Earthquake’s tiny $649 MiniMe is designed for places where a typical subwoofer just won’t fit, such as bedrooms and offices. The MiniMe uses a single 6.5” woofer, two 6.5” passive radiators, and a 250W class-D amp. It’s available in black, white, red, silver, or yellow. 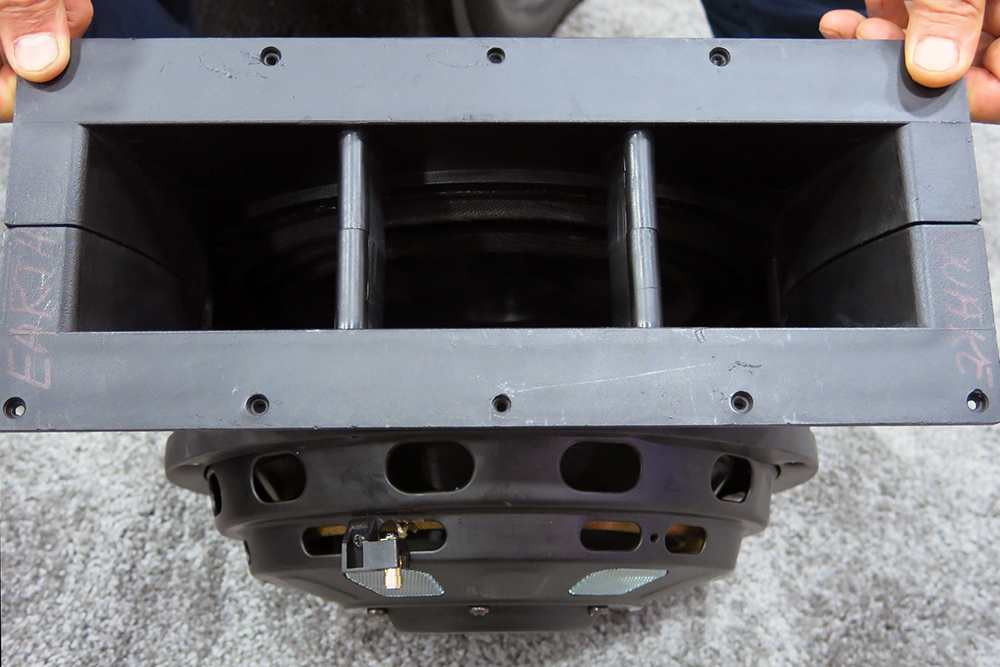 “The Pump” is Earthquake’s tentative name for its new in-floor/in-ceiling subwoofer. The single unit combines a 12” driver and a 12” passive radiator, both of which vent through a common slot. The subwoofer mounts between floor or ceiling joists. A standard heating/cooling system grate covers the vent, making The Pump totally inconspicuous. Price is expected to be $499, and you’ll need to add an amplifier. 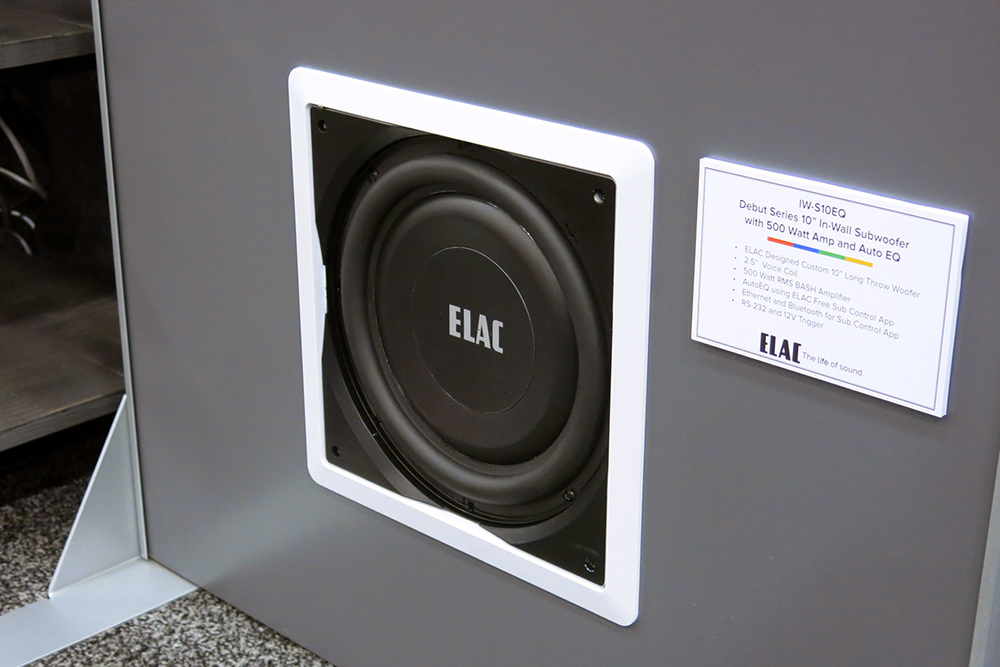 ELAC’s IW-10EQ was by far the most interesting in-wall sub at the CEDIA Expo -- and probably in the history of audio. It’s a 10” woofer driven by a separate 500W amp. Like the company’s S10EQ and S12EQ box subwoofers, the IW-10EQ has an auto room EQ function that works from an iOS app running on an iPhone or iPad. But as designer Andrew Jones pointed out, the response of an in-wall subwoofer, when used without a back box, varies depending on the volume of the wall opening behind it, and you can’t know the optimum target curve for the EQ unless you know the acoustical characteristics of the enclosure. So the amplifier measures the impedance curve of the woofer after it’s installed; from this data, the iOS app can calculate the enclosure volume. Then you use the iOS device’s microphone to measure the response in your seat, and the optimum compensation curve is calculated and loaded into the amplifier. 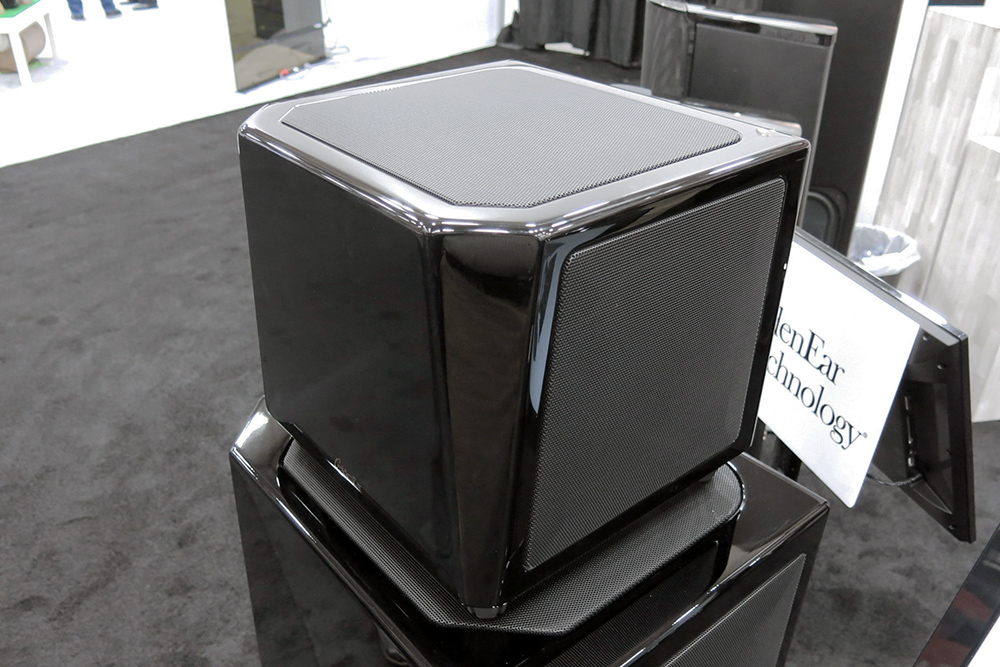 The $1249 SuperSub X is GoldenEar Technology’s attempt at making a high-powered, tiny sub that sounds tuneful instead of one-notey. “We’ve been showing the larger model, the SuperSub XXL, for about a year, but this was the real project,” company founder Sandy Gross told me. The SuperSub X uses GoldenEar’s inertial balance technology, which helps cancel vibration by positioning one active 8” woofer at each end, and passive radiators on top and bottom. It’s powered by an internal class-D amp rated at 1400W. 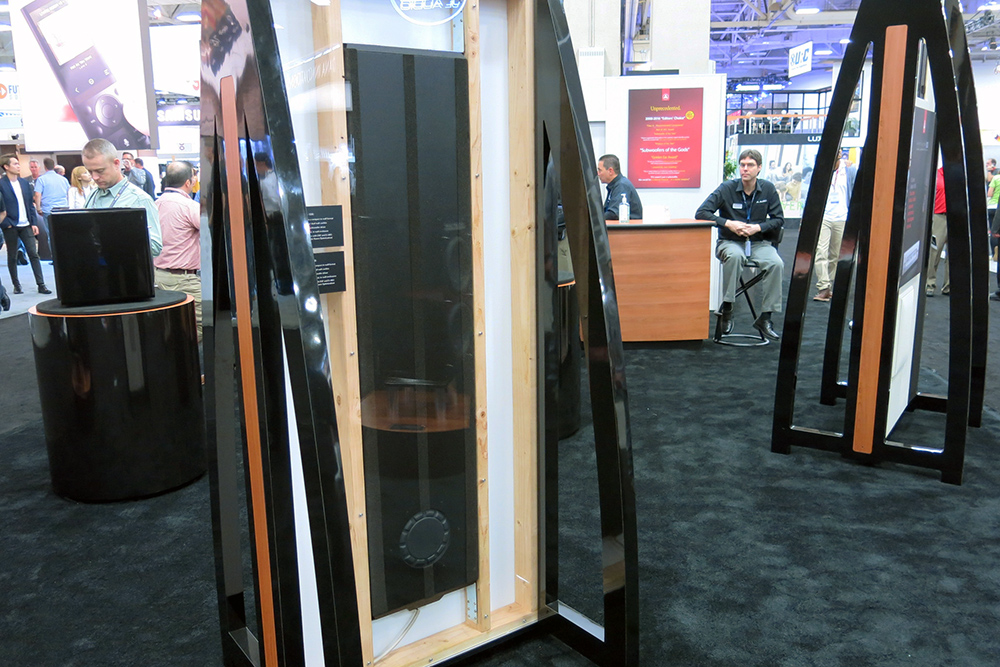 JL Audio’s known for large, powerful audiophile-oriented subs; the upcoming Fathom IWS-SYS-108 (shown) and IWS-SYS-208 in-wall subwoofers should help bring the brand into more custom-installed systems. The former has one 8” driver, and the latter has two 8” drivers. Each sub is one component in a three-part system comprising the sub, an in-wall enclosure, and the SA-600W 600W amp. The new models won’t be finished until fall 2017, so retail prices have yet to be determined. 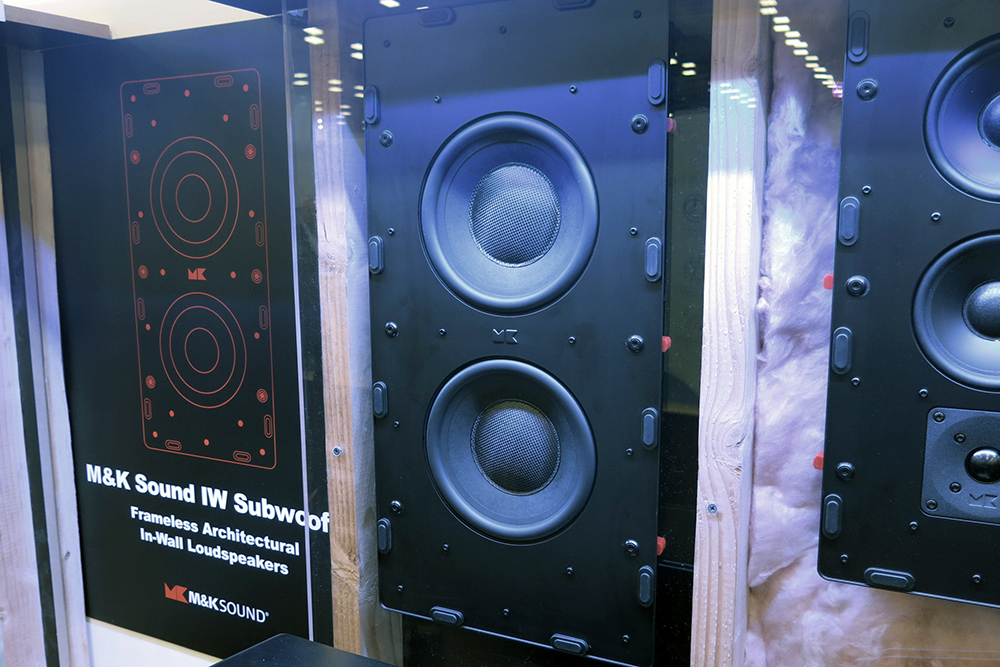 Back in its 1990s heyday, M&K Sound used to make some of the world’s best in-walls -- basically flush-mount versions of its satellite speakers with heavy metal baffles. Now the company is resurrecting those designs, and also adding an in-wall subwoofer: the IW28S. It’s basically two 8” drivers mounted on a thick steel baffle, driven by the VA500 500W outboard amplifier. The retail price hadn’t been set at the time of the show. 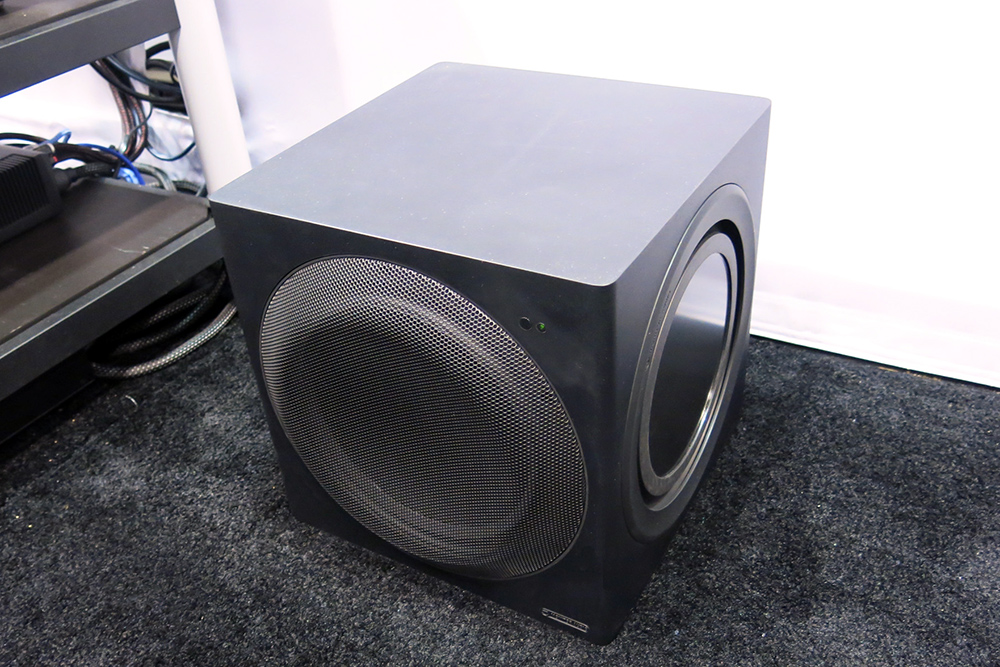 With its new CW8 and CW10 subwoofers, Monitor Audio promises powerful, deep bass from super-small enclosures. The $895 CW8 and the $1195 CW10 (shown) are similar in that they both employ a 400W class-D internal amplifier, and both use a single active woofer and two passive radiators. The CW8’s woofer and radiators measure 8” and the CW10’s measure 10”. 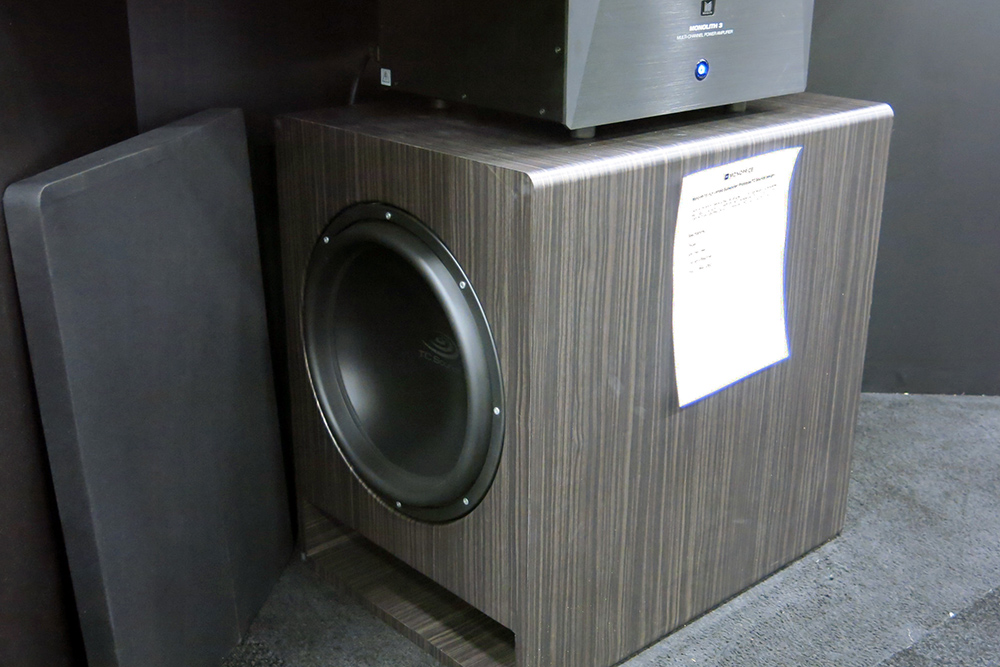 Perhaps the biggest subwoofer surprise (literally!) at the CEDIA Expo came from the ultra-low-price brand Monoprice, which showed a new 15”, 1200W subwoofer it hopes to sell for less than $1200. The amplifier in the Monolith subwoofer has extensive digital signal processing capability, with parametric equalization and adjustable low- and high-pass subwoofer crossover filtering. XLR and RCA inputs and outputs are provided. It looks a little like the acclaimed Hsu Research VTF-15H MK2, but with a nicer finish and the DSP added.