As usual, the focus at last week's 2014 CEDIA Expo in Denver was on home theater and home automation, but it was also the first North American appearance for several new stereo speakers that have either just hit the market or will be shipping within a few months. Some of these are intended just for stereo use; others are available with accompanying center and surround speakers and subwoofers for home theater. 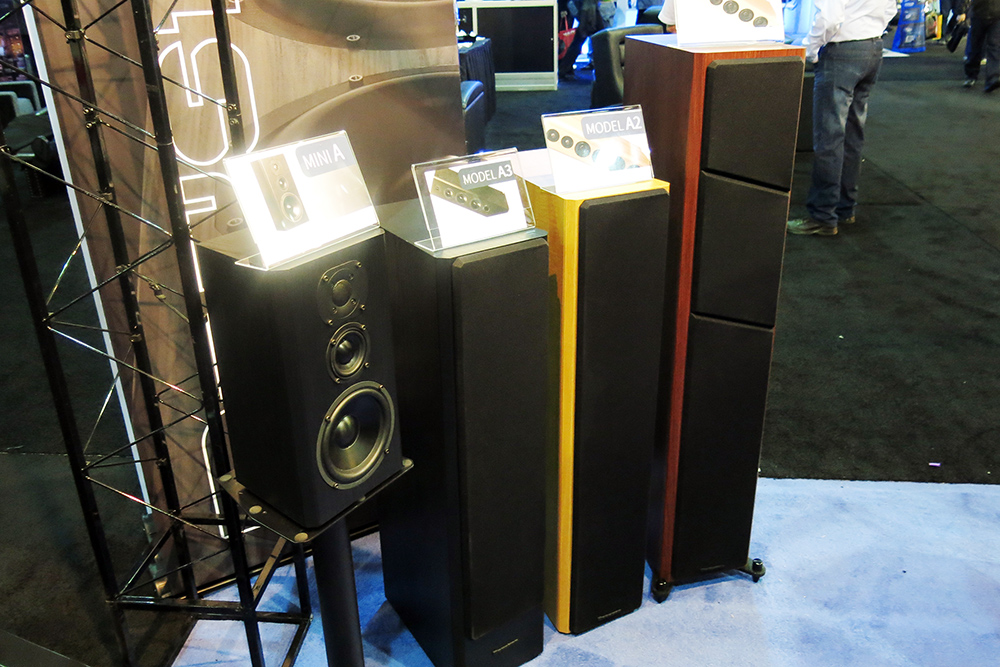 I'm generally a fan of three-way bookshelf speakers, which is why I was so happy to see the new Bryston Mini A, shown at left. The $1200/pair Mini A is the smallest in the new A line, which also includes the $2390/pair A3, the $2790/pair A2, and the $3490/pair A1. So what's exciting about these rather ordinary looking box speakers? Only that, based on my recent experience with the company's $4500/pair Middle T, they hold the potential for great sound. 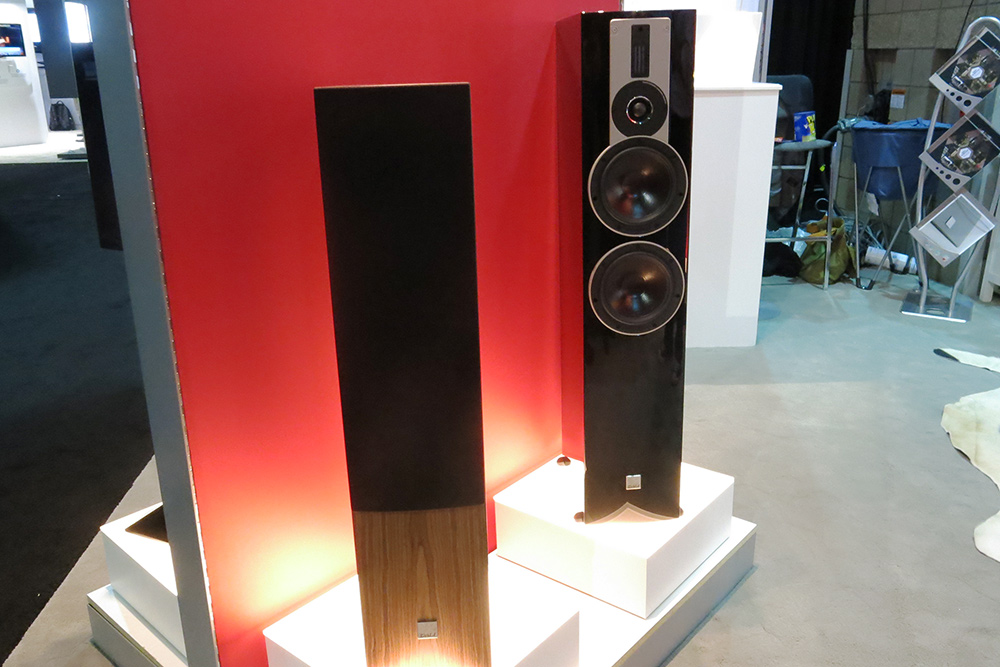 DALI's new Rubicon series is a whole new line of midpriced (for DALI, at least) speakers that borrow technology from the company's flagship Epicon line. Specifically, the magnets are made from SMC, or soft magnetic compound, which comprises iron filings that are coated and then pressed together; the company says this creates a more linear and consistent magnetic field and reduces odd-order distortion. That's the $4595/pair Rubicon 5 at left and the $5995/pair Rubicon 6 at right. Both have a 45mm ribbon supertweeter, a 29mm dome tweeter, and 6.5" midrange-woofers; the Rubicon 6 adds an extra woofer. Bookshelf and an LCR (left/center/right) models are available, too. 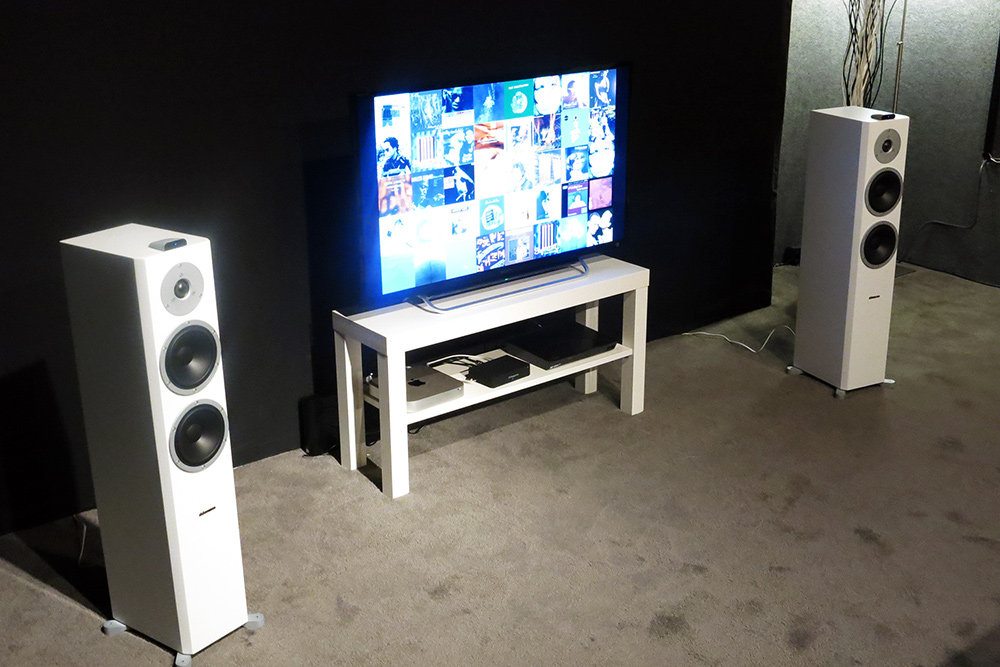 Dynaudio was one of the first high-end speaker makers to get into wireless with its Xeo series. At the CEDIA Expo, the company showed its second-generation models, the $4300/pair Xeo 6 tower shown here and the $2600/pair Xeo 4 bookshelf speaker. What's different? A new interface at the top that lets you adjust volume and source selection without the remote. Also, a switch on the back tunes the speakers for use against a wall or in a corner. The wireless transmitter now accommodates 24/96 resolution instead of the original models' 24/48, and can operate in the 2.4, 5.2, and 5.8GHz bands instead of just 2.4GHz, as in the original series. Each of the Xeo 6's woofers has its own amp, while the old Xeo 5's woofers shared an amp. And the Xeo 6's price is $200/pair lower than the Xeo 5. 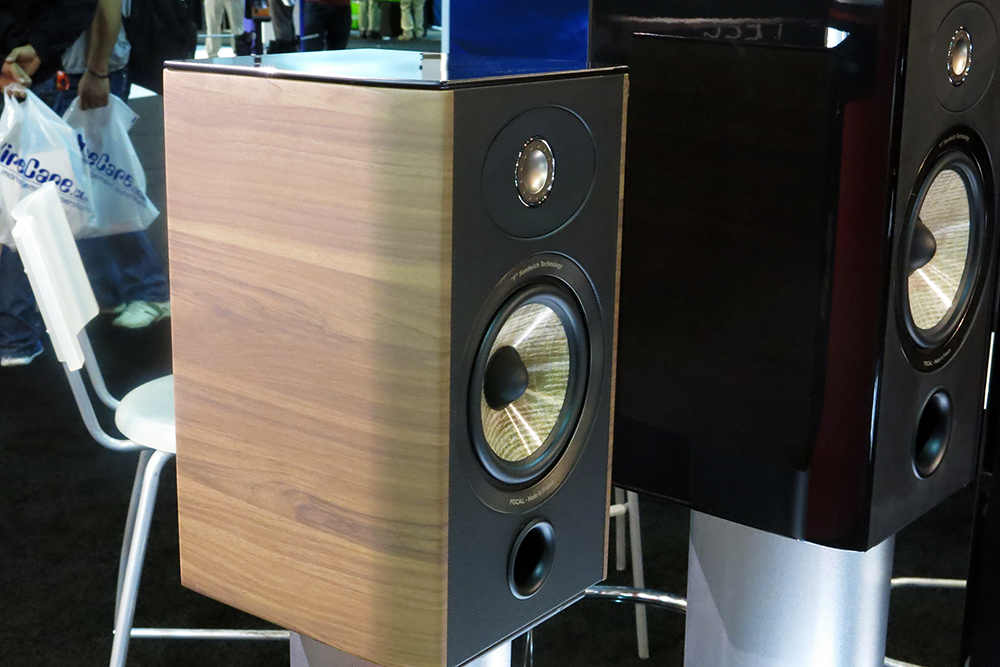 The Aria 905 is the newest and smallest model in Focal's Aria 900 line, with a 5" woofer made from the same flax fiber used in the rest of the line. John Bevier, national sales and product manager for distributor Audio Plus Services, told me that the flax fiber has higher tensile strength than Kevlar. The flax is sandwiched between sheets of glass fiber-impregnated tissue and then pressed under heat for 40 minutes to create a very stiff but light (and in my opinion, beautiful) woofer cone. The line also includes tower, center, and surround speakers. Price for the Aria 905 is $995 per pair. 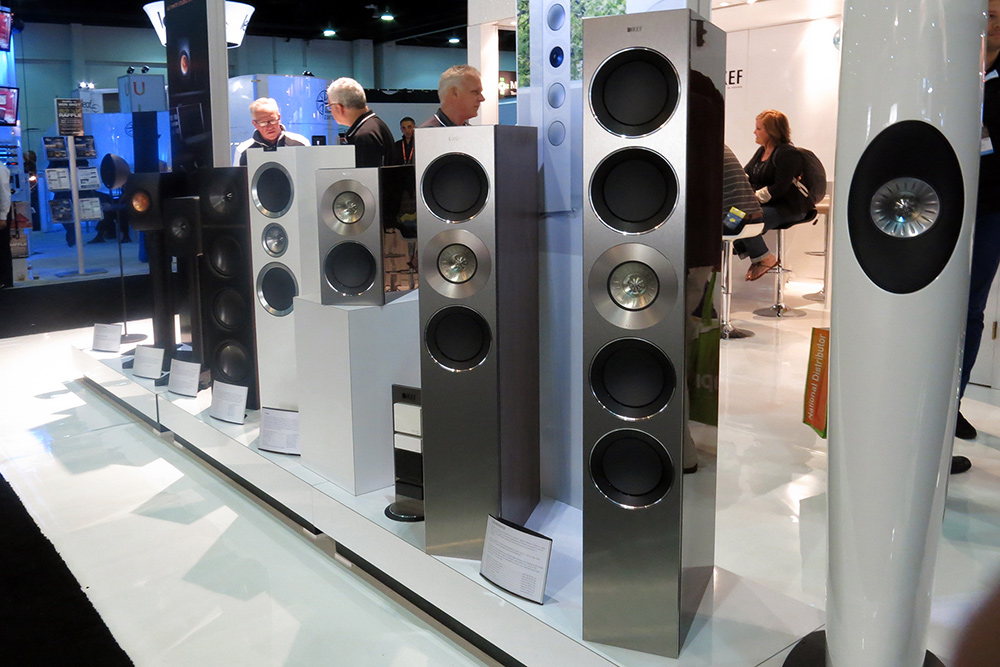 With the North American launch of a new Reference line, KEF's booth had, arguably, the biggest news for two-channel audiophiles at the CEDIA Expo. The engineering that went into these new models, which are the three metal-finished models in the middle of the photo, is pretty impressive. They employ essentially the same Uni-Q coaxial midrange/tweeter found in the new super-high-end Blade Two (seen at far right), slightly modded to suit the Reference Series speakers' flat baffles. The 6.5" woofers are also borrowed from the Blade Two. The woofers are bolted all the way through to the back of the enclosure to enhance stiffness. All of the Reference Series speakers include a unique and brilliant adjustable port tube. You can insert a long tube for enhanced deep bass response, or a short tube for flatter bass response. Models include the $7500/pair Reference One bookshelf speaker, $13,000/pair Reference Three tower, and $18,000/pair Reference Five tower. Two center speakers and a subwoofer fill out the line. 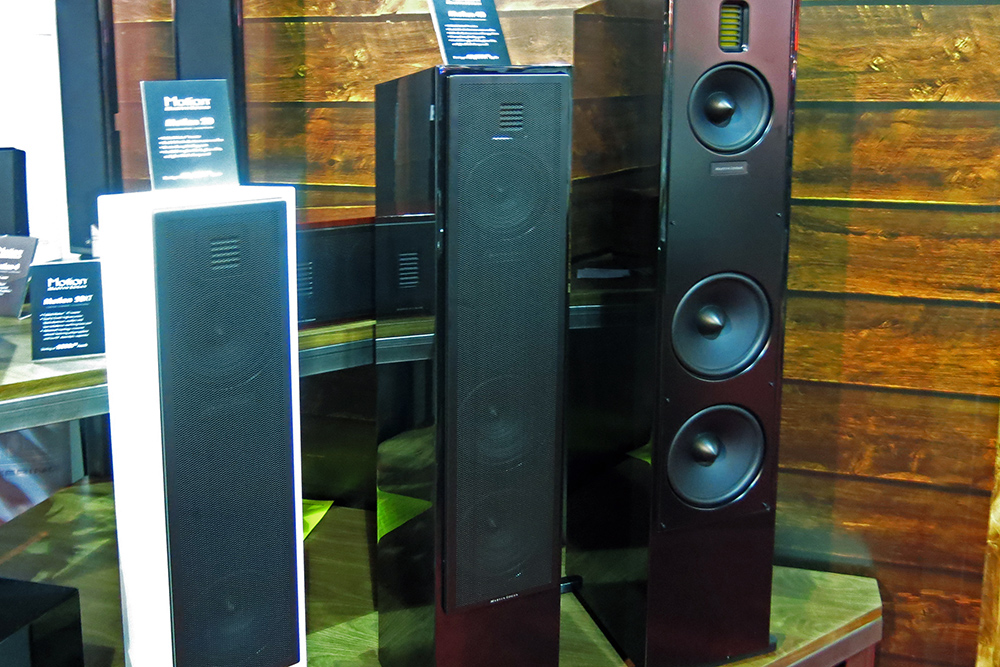 MartinLogan's affordable Motion-series speakers have found favor with my ears and my test gear, so I was excited to see the Motion XT series, three new models upgraded with a larger version of the Folded Motion tweeter used throughout the Motion line. According to the company, the larger tweeter delivers considerably more undistorted output. The top-of-the-line, $3000/pair Motion 60XT tower is on the left. There's also the $1200/pair Motion 35XT bookshelf speaker and the $900 Motion 50XT center speaker. 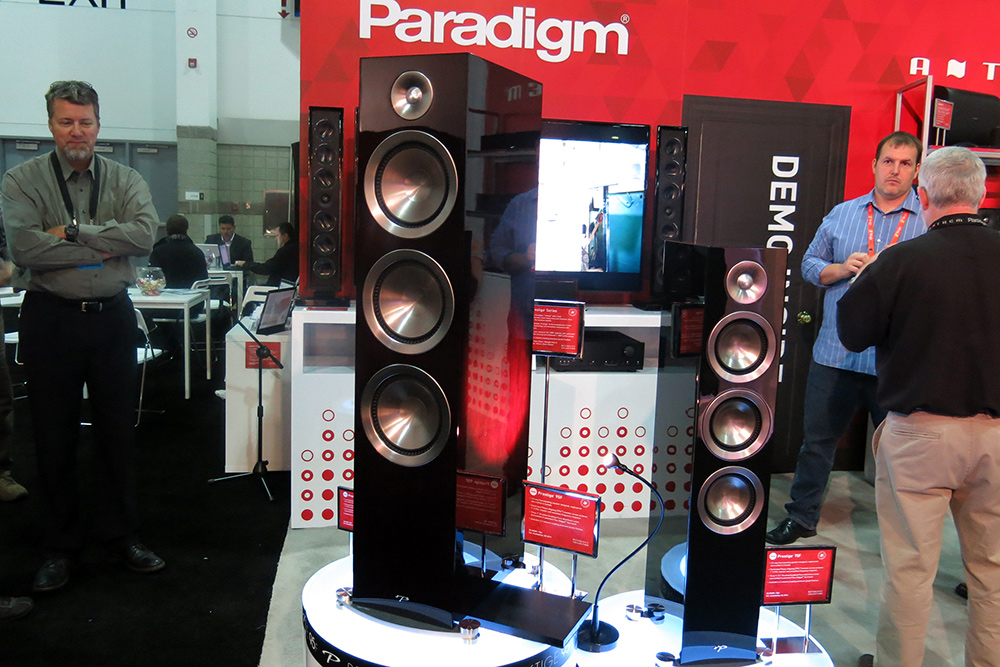 Paradigm's Prestige series represents a new line and a new philosophy for the company; not only do the new speakers strive for superior sound quality, but they also incorporate a lot more attention to industrial design and finish than Paradigm's past models. The most important new technical development is a new perforated metal tweeter "lens" that serves as a phase plug and also contours the tweeter's frequency response. The speakers are made in Canada, too -- which of course all Paradigms were until pretty much every speaker company moved its production to China. That's the top-of-the-line, $5000/pair 95F at left and the $3000/pair 75F at right. Bookshelf, center, and surround models will also be available. 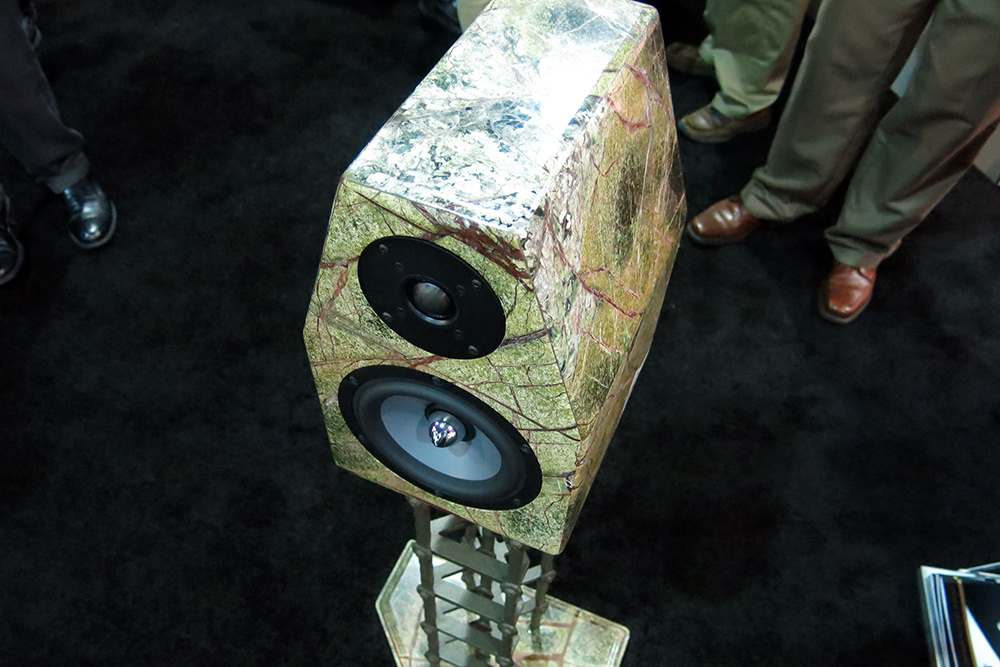 Some speaker makers claim their enclosures are so rigid and inert that they feel like stone. But the RBH Status Voce Fina's enclosure is stone: it's crafted from solid granite slabs. The proprietary 6.5" woofer uses a beryllium-alloy cone; the tweeter is a 1" Scan-Speak model. All metal parts are machined from billet aluminum. The $14,000/pair price includes the stands, and you can choose from different varieties of granite. Sadly, the speaker wasn't being demoed, just displayed. But it attracted a lot of attention nonetheless. 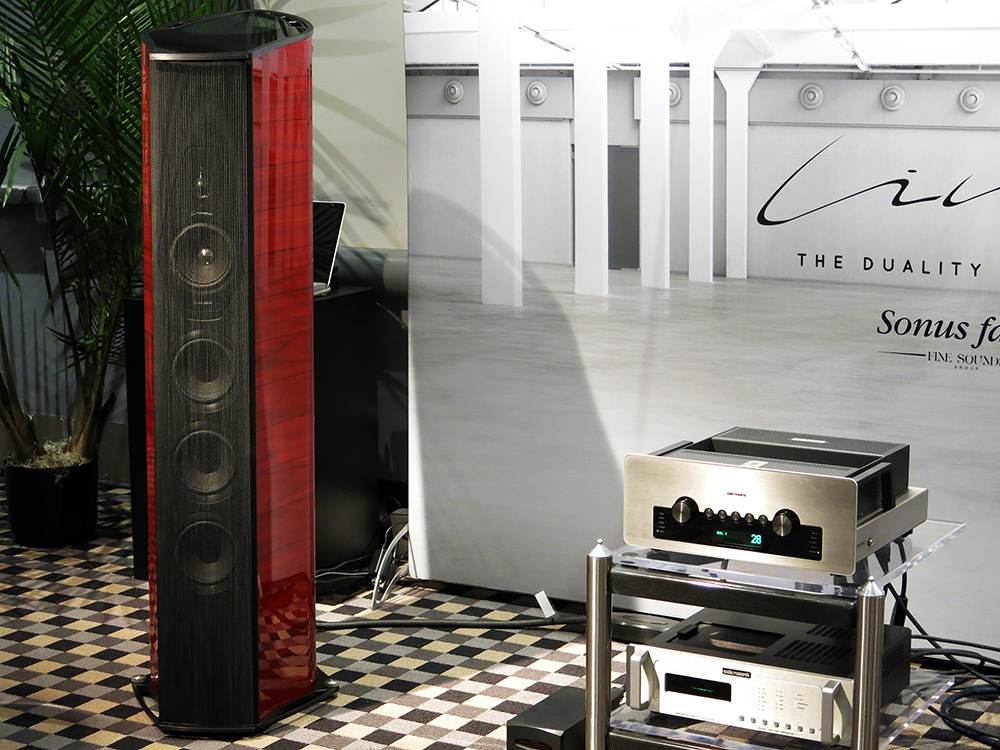 Sign of the times: The $70,000/pair Lilium isn't Sonus Faber's flagship; it's actually a step down from the top-of-the-line, $120,000/pair Aida. The intricate cabinet, made with a modified lyre-shaped cross-section, seems perfectly stiff and non-resonant when you rap a knuckle against it. A hidden 260mm "infra woofer" with a passive radiator provides rated bass response down to 20Hz. Unfortunately, Sonus Faber demoed the Lilium in a large room full of chatty people, so I couldn't really gauge the sound quality.

Of course, CEDIA isn't the best place to hear stereo speakers. Most of the demos focus on home theater, and the show's not open to the general public. But many of these manufacturers told me they'd be back in Denver in October for the Rocky Mountain Audio Fest, and would be doing full demos then. Lucky for me I go to CEDIA and RMAF . . .