From our vantage point, the 2018 Audio Video Show in Warsaw hosted more product premieres in the loudspeaker category than in all the others combined. And of those new introductions, by far most were presented at the Radisson Blu Sobieski hotel. This place was a goldmine. Here’s the third and final batch of loudspeakers Jason and I saw, with all prices in Polish zlotys (zł), euros (€), US dollars ($), or British pounds (£). All the speakers were at the Sobieski except one, the FinkTeam Borg, which was just down the street at the Golden Tulip hotel. 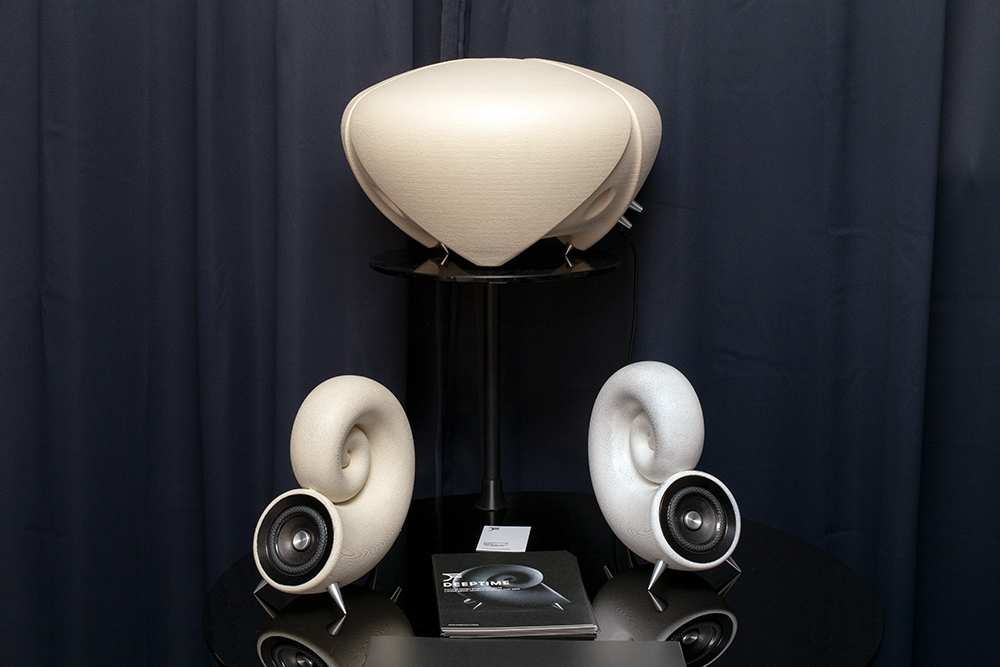 Here’s something that’s truly newfangled. Deeptime, a new company from the Czech Republic, showed a 2.1 sub-sat system with cabinets that are 3D printed from sand. They have a rough texture that’s most unique, sort of like garden pottery. The Thunderstone subwoofer and Spirula satellites are made in a limited edition of 1681 sets. The amplifiers are all built into the subwoofer, which also has a 3.5mm minijack analog input and a TosLink digital input, and allows for wireless connection via Bluetooth. The sound was promising -- good heft in the bass and decent clarity overall. Mostly, though, it looks pretty cool. The three-piece system, which also includes snappy-looking cables, retails for €3200. 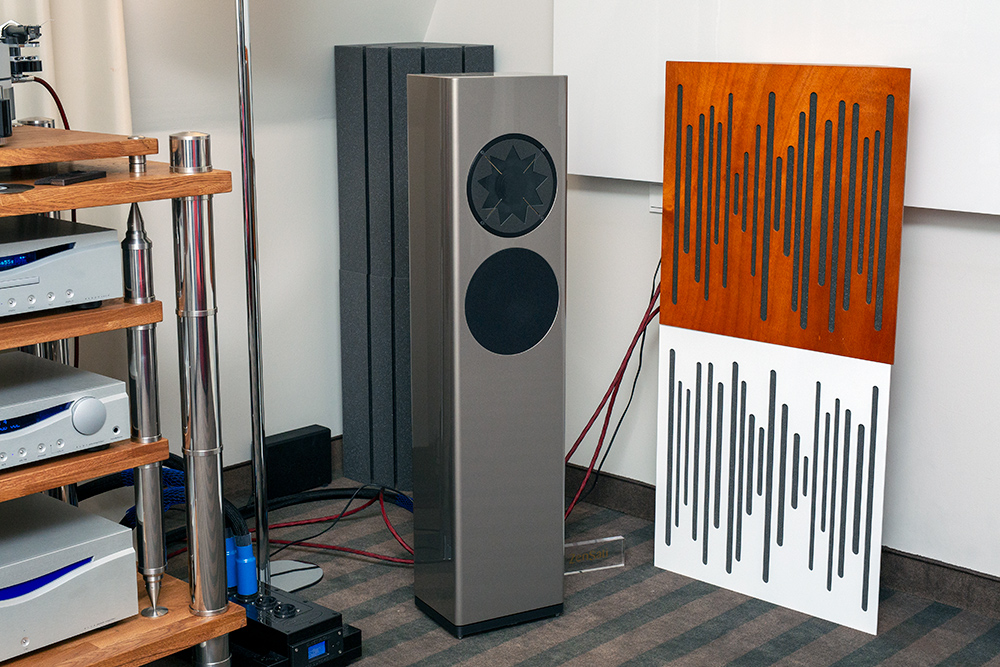 Daniela Manger, CEO of Manger Audio, gave us the lowdown on the company’s new P2 passive floorstanding speaker. Up front, its . . . 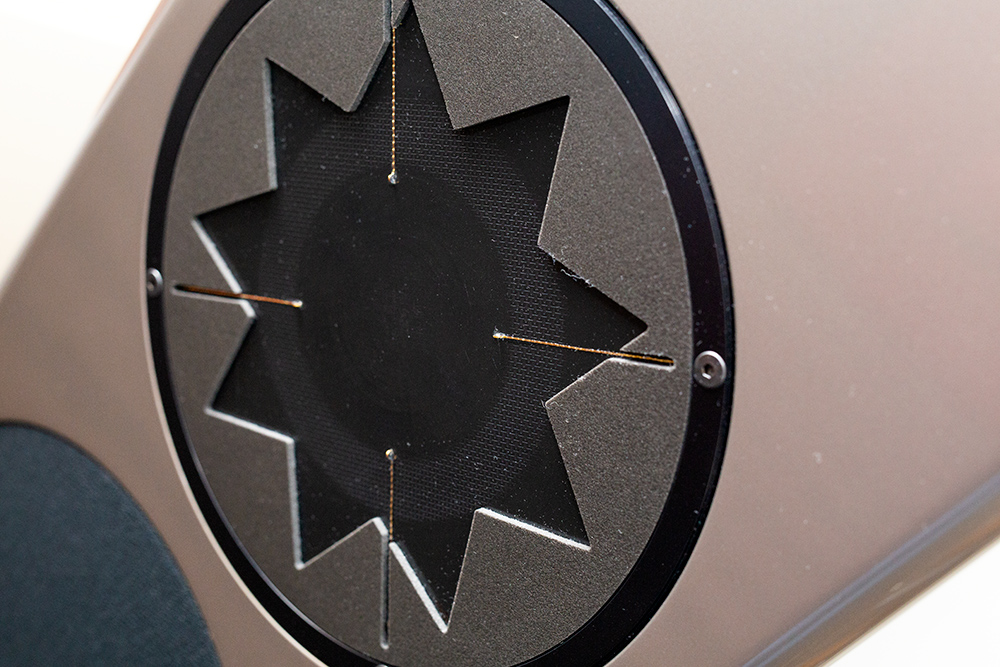 . . . unique Manger bending-wave driver handles the bandwidth from 360Hz up to 40kHz. For the bass range, the P2 is loaded with a custom-made 8" woofer on the front augmented by . . . 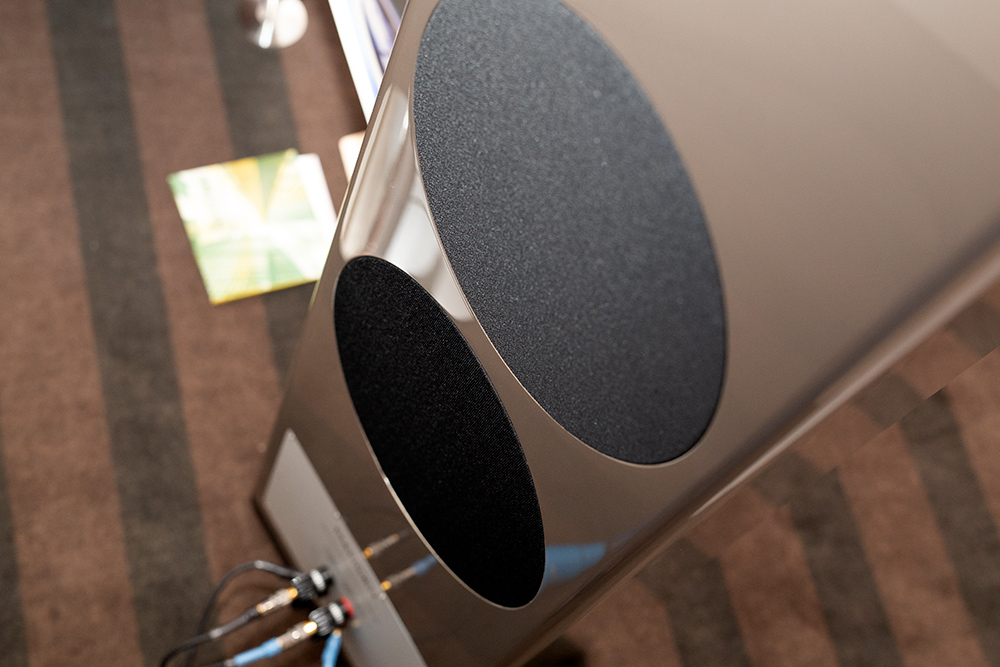 . . . two passive radiators around back. Manger is a boutique manufacturer out of Germany, and as such, its speakers are available in a vast number of satin and gloss finishes, or any veneer. In fact, we learned that the speakers are built without paint, and the finishes are applied prior to delivery. The P2 retails for €12,800 per pair. 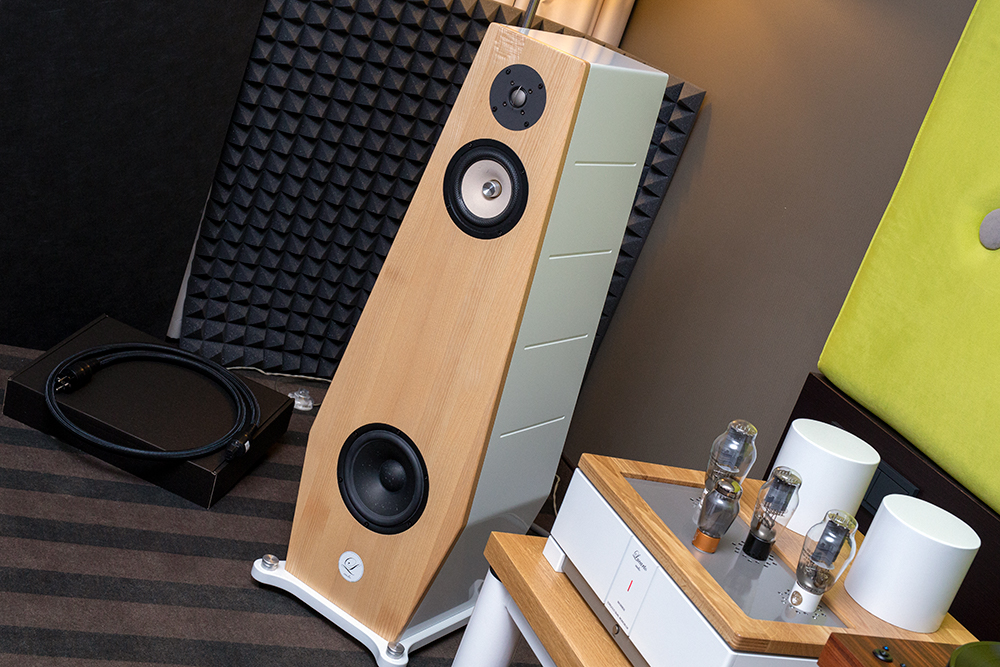 Besides the electronics that we covered, Lucarto Audio also premiered its three-way Songolo SX300 speaker, which features a Satori MW19 woofer and Scan-Speak Illuminator tweeter. A pair of these speakers will set you back zł14,500. 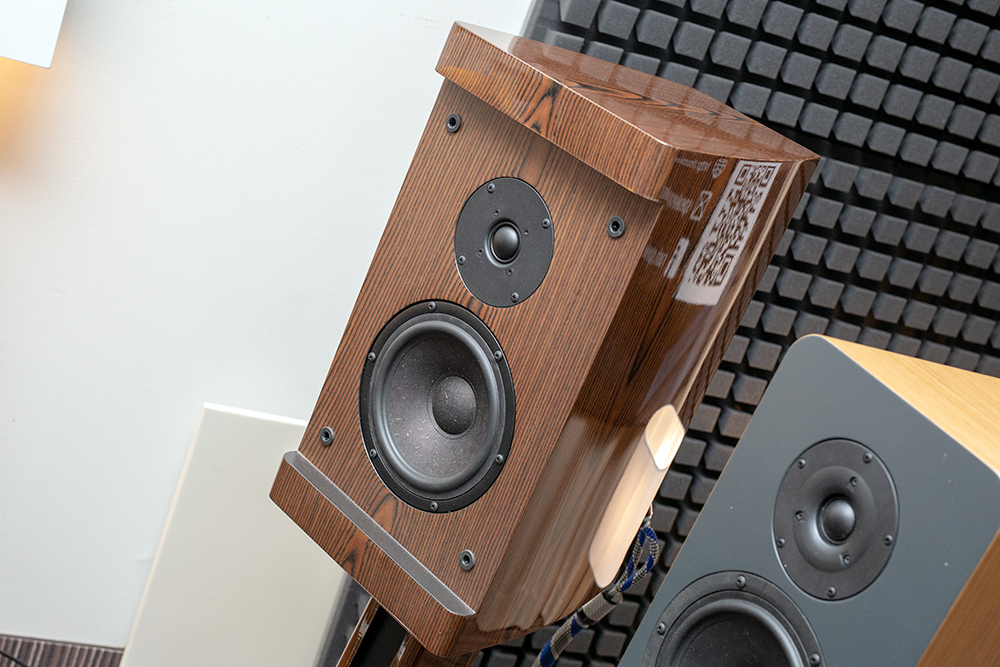 Rush, based out of Kiev in Ukraine, showed its AS-2SV two-way speaker with a rear-ported 6.5" midrange-woofer and a 1" dome tweeter. The stands are included for $3000, which seems reasonable given the nice walnut veneer. 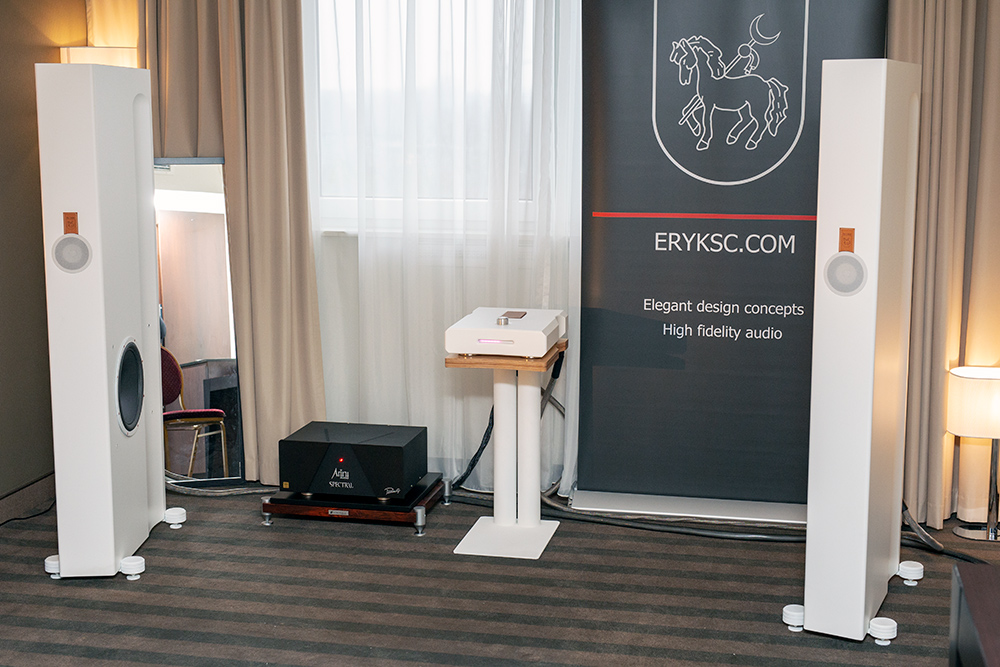 Next up is the premiere of Wind and Fire, a flagship stereo system from Eryk S Concept, located in Warsaw. The front driver is a 12cm (4.72") full-range paper cone from Japan. On the side of the four-layer MDF glued-and-pressed cabinet is a 12" woofer with an alnico magnet. The crossover is attached to a 5kg aluminum plate that also houses the attractive binding posts. The finish is matte white, a proprietary mix of lacquer that’s applied in five layers. The amplifier serves as a full system hub. It features Chromecast, Wi-Fi, Bluetooth, and a phono stage. The class-D amplifier outputs 200Wpc into 8 ohms. The system price is €19,000, including the stand for the amplifier. 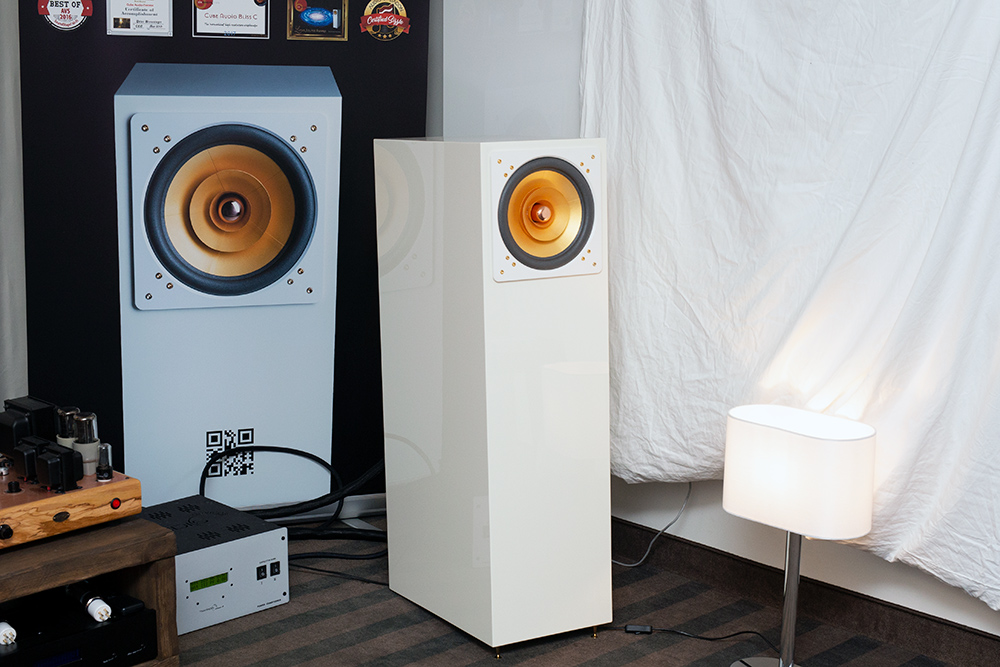 Cube Audio was getting some serious bass out of its Nenuphar (water lily in Arabic), a single-driver speaker that retails for €15,900 per pair. The 10" driver goes down to a solid 30Hz, and as such, qualifies this as a genuine full-range speaker -- or at least close to it. The . . . 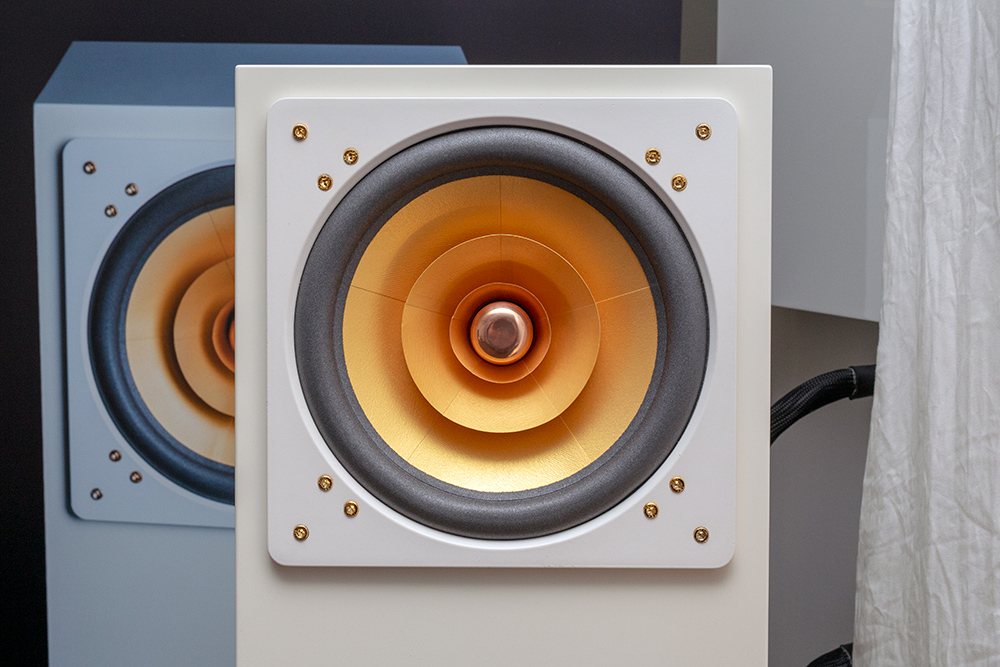 . . . driver employs a neodymium magnet and three whizzer cones, which work in the high frequencies. The cabinet is a folded Voigt pipe that’s finished in gloss lacquer in any color. According to the company, at 93dB sensitivity, the Nenuphar needs only 1.5W to get up and go, which is all they were feeding it in the display room. The pair sounded dynamic and fun, with none of the nasty peaks often heard from single drivers. Cube Audio is based in Poznan, Poland. 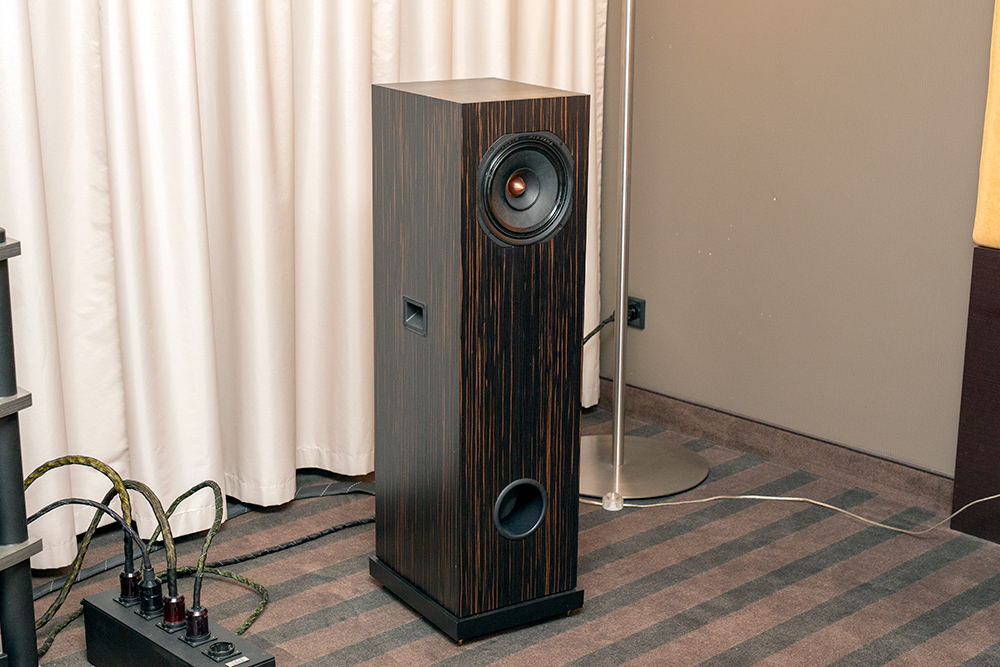 Jag Electronics, out of Lodz, Poland, was playing its Jag 40, a single-driver speaker made with attractive ebony veneers. The Jag 40 uses an . . . 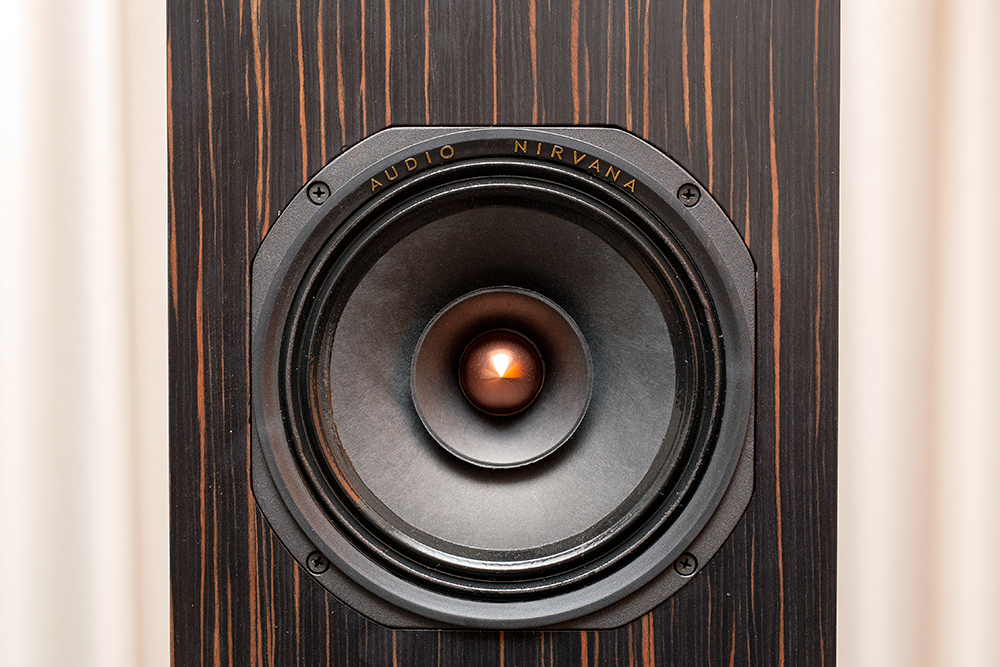 . . . Audio Nirvana 8" driver, but surprisingly, it’s not a transmission-line cabinet. Language barriers and time constraints prevented us from determining the actual cabinet configuration, mind you, so there could be something more to it. The pair of Jag 40 speakers retails for zł6500. 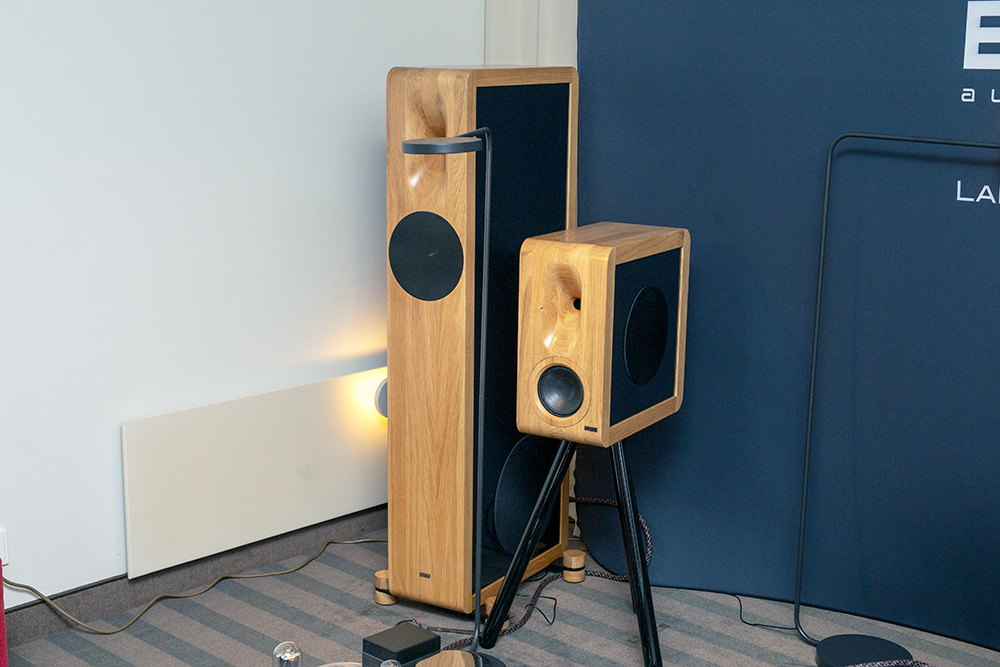 8MM Audiolab is a Lithuanian company, and its floorstanding PIU (“more” in Italian) speaker features a beautiful, CNC-machined solid-oak baffle that’s up to 9cm thick in places. The bass range is courtesy of a 12" side-mounted woofer, and up front is a 6.5" midrange-woofer and a horn-loaded 1" compression driver. It’s a heavy sucker, weighing in at 75kg per speaker. Custom speaker terminals are machined from solid copper bars and plated with silver. The PIU retails for €18,000 per pair. There’s also a PIU Mini, shown beside the PIU, which clocks in at €12,000 per pair. 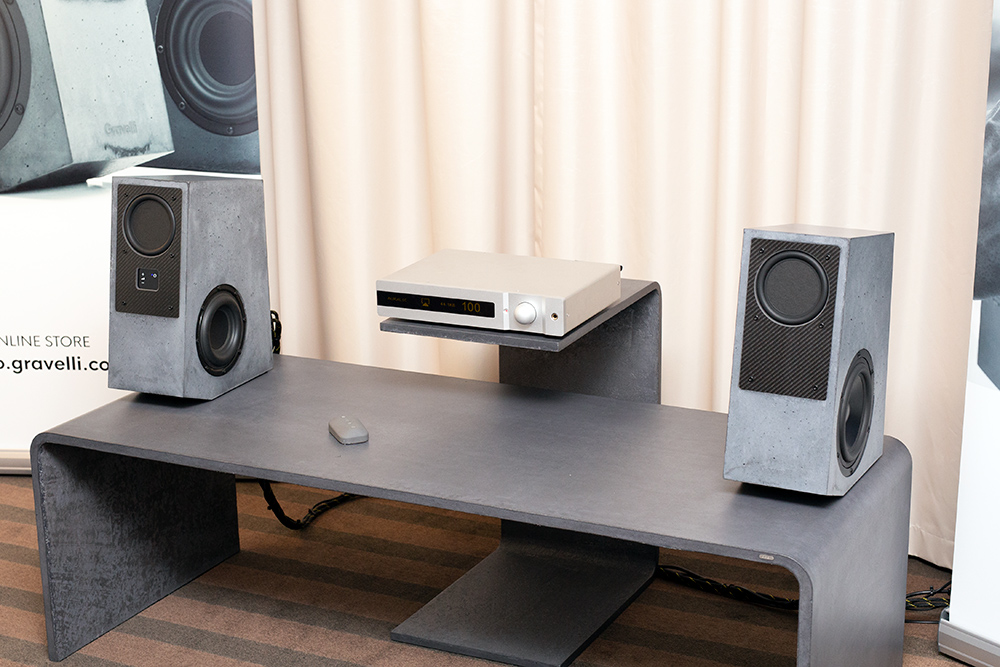 Here’s a speaker that’s cast out of solid concrete! What an idea! Gravelli, based in Prague, Czech Republic, was showing its dense as, well, concrete Virtuoso active speaker. The €12,000-per-pair Virtuoso weighs in at 16kg, comes ready to play with all cables necessary, and can accept analog or digital inputs. The driver complement is a BMR 5.5" full-range transducer up front that extends to 22kHz. The . . . 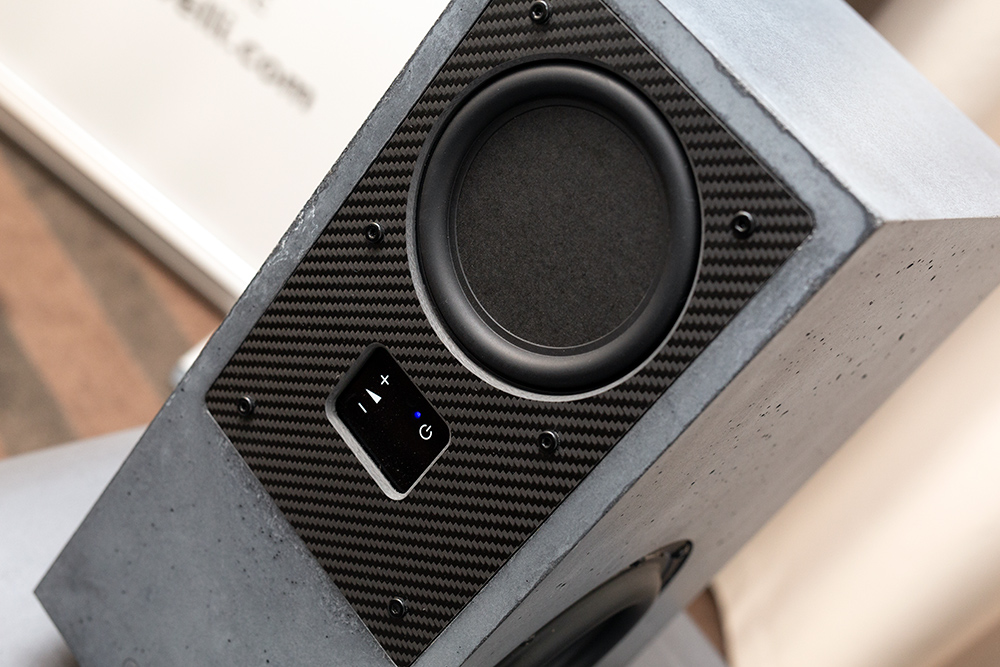 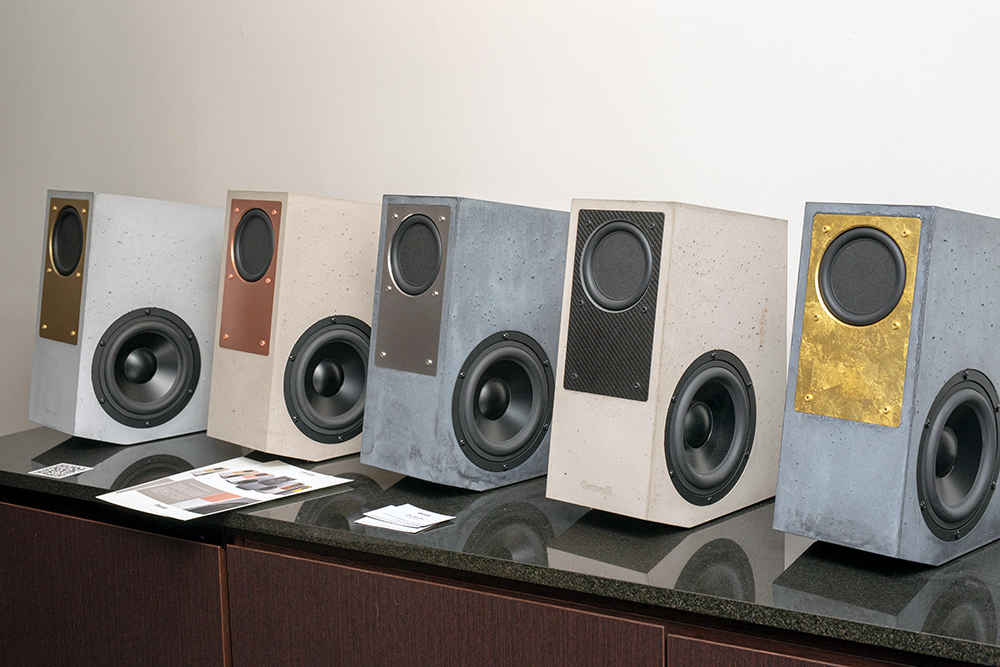 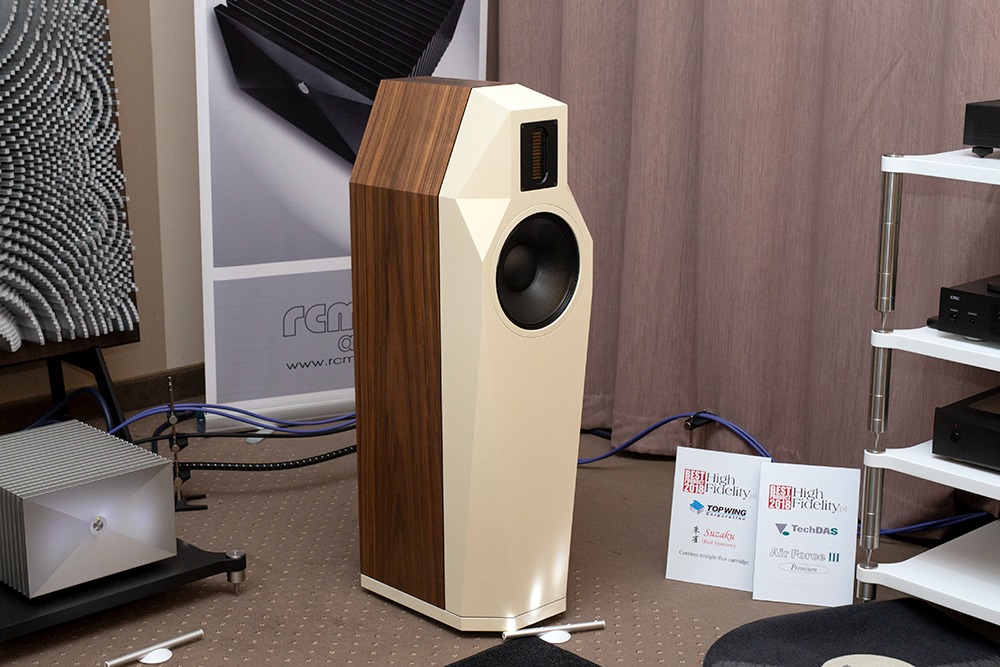 FinkTeam, from Essen, Germany, showed its new Borg speaker, which retails for €25,000 per pair. The Borg is loaded with forward-thinking research. At its core, the Borg is a two-way floorstander featuring a 10" woofer with a 3" voice coil and . . . 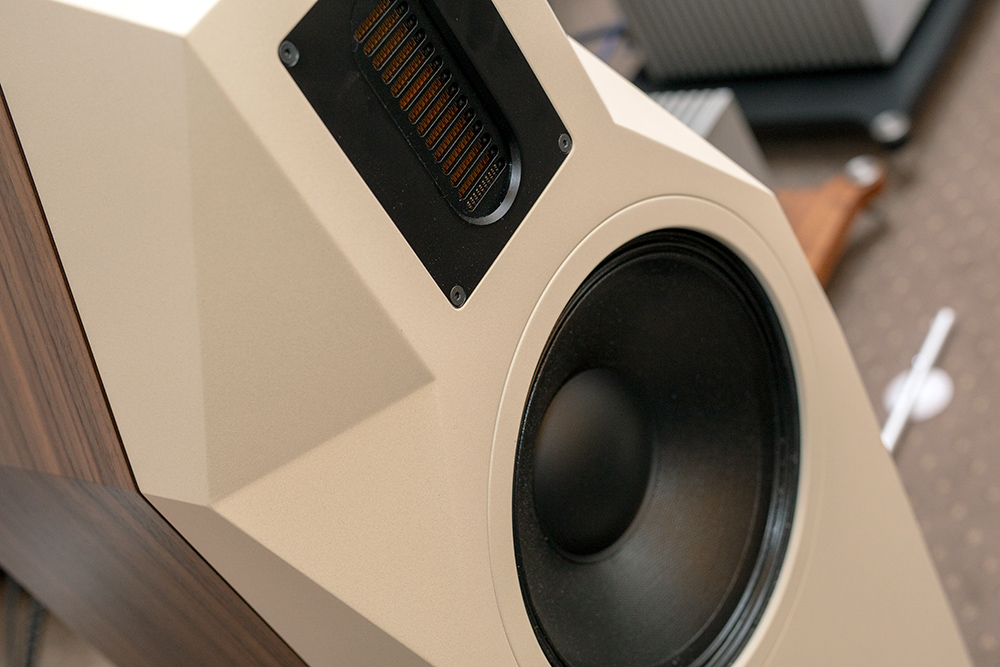 . . . a 5" air-motion transformer (AMT) high-frequency driver. The cabinet is ported, but interestingly, the port itself has an internal port, which is specifically designed to prevent the main port from passing any standing waves from inside the cabinet. The Borg’s crossover features four switches. One adjusts impedance to accommodate different amps, and three others permit tuning in the midrange, presence, and high-frequency regions. The frequency adjustments are only +/-0.5dB, but according to Karl-Heinz Fink, the chief designer, the broad range they operate across makes them very useful for accommodating different rooms -- something he’s found useful as he sets them up in various demo rooms, such as at the Golden Tulip hotel.