Giya: Looks Can Be Deceiving

Tell Laurence Dickie that you don't like the look of his loudspeakers and, believe it or not, he'll be OK with that. Conversely, tell him that you like them and he'll simply tell you that he's happy to hear that you share a similar "aesthetic appreciation" for form. So he's good both ways. But tell him that you think the styling is simply for show, and he's bound to speak up. He might even get a little angry. 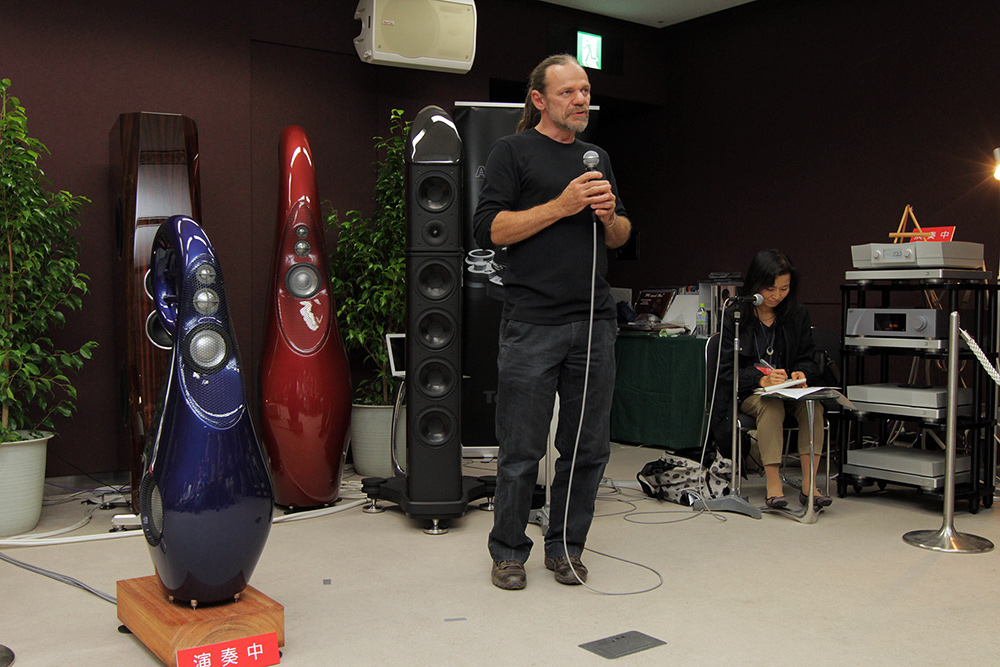 Laurence made that abundantly clear when he presented the new Giya G4 to an appreciative audience at TIAS 2013. He began by saying, "Vivid Audio speakers are not simply an exercise in industrial design -- they are an exercise in acoustical design." Then he paused to make sure his comment sunk in because he knows it's what some people might think when they look at Vivid's Giya-series speakers.

For this engineering-driven company, the look, which some might love and others might hate, is a case of form following function. The main function has to do with Dickie's tapered-tube technology, something he developed while working at B&W in the '80s and '90s, culminating in the development of the Nautilus loudspeaker, and he's since perfected the technology at Vivid. Simply think of it as his way of arresting the unwanted rearward-directed energy from the driver's diaphragm so that the frontward-directed energy is as clean and clear as possible. 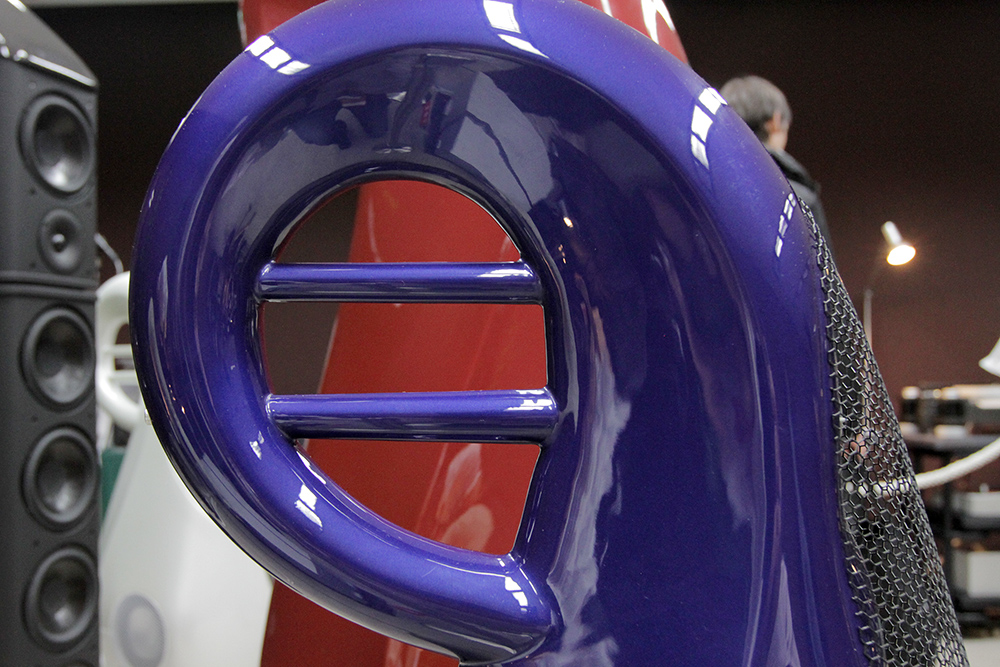 Putting tapered tubes on the tweeter or midrange drivers is relatively easy -- a tube is simply attached to the rear of the driver and is terminated somewhere around the back of the cabinet. With the woofers, however, it's more difficult because the tube has to be wide and, more importantly, long -- much longer than the depth of the cabinet. The question then becomes: "Where do you put it?"

The answer lies in the cabinet's shape. If you could uncurl the top of a Giya cabinet, you'd end up with a tapered tube that's several feet long and pointing straight upwards. In other words, it's part and parcel with the cabinet, which is a brilliant idea when you think about it. That's why when Laurence talks about the cabinet, what matters most to him is not whether you think it's beautiful, ugly, or crazy, but that you understand that it's integral to any Giya-series design and necessary for the resultant sound, which is shockingly clean. 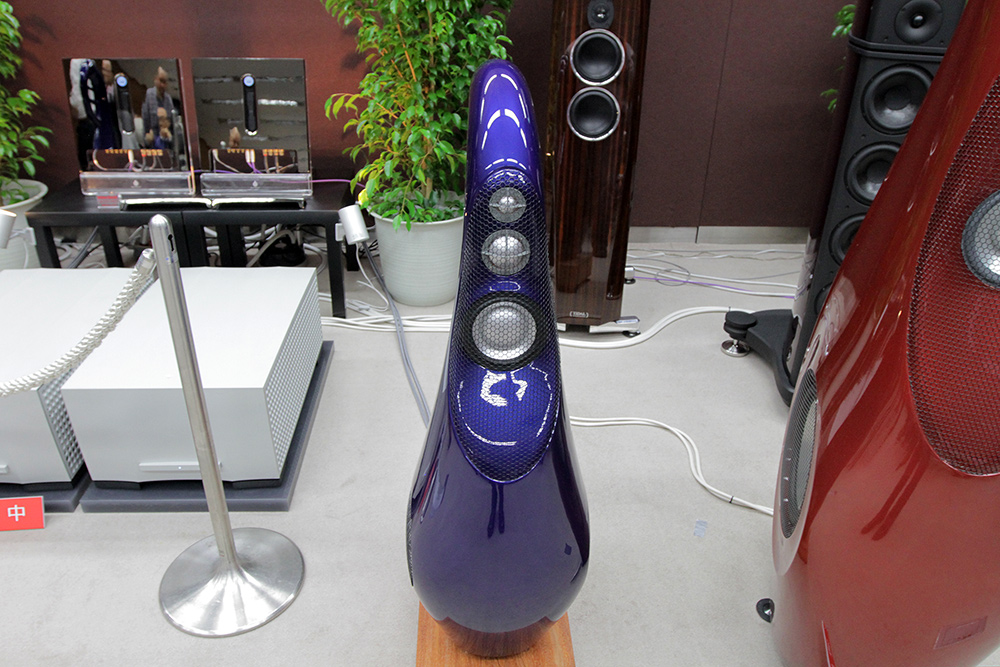 Form also follows function in terms of the cabinet shape -- the narrow, smooth, rounded front and sides provide an unimpeded launching pad for the sound waves from each driver, in turn creating diffraction effects that are pretty much nil. Basically, the cabinet does a very good job of getting out of its own way.

Of course, that doesn't mean he and the rest of the folks at the company can't have a little fun with the resulting form that they've created. There are some embellishments that he's added to each Giya model's inherent shape, and all of the models come in a variety of colors. The Giya G4 shown in Japan was finished in a striking blue -- it looked good, if a touch conventional. For those who choose to be braver, Laurence said that they have a light mint-green color ready for the 2014 G4 launch, and it's not only unique but also bound to be extremely popular once people see it. 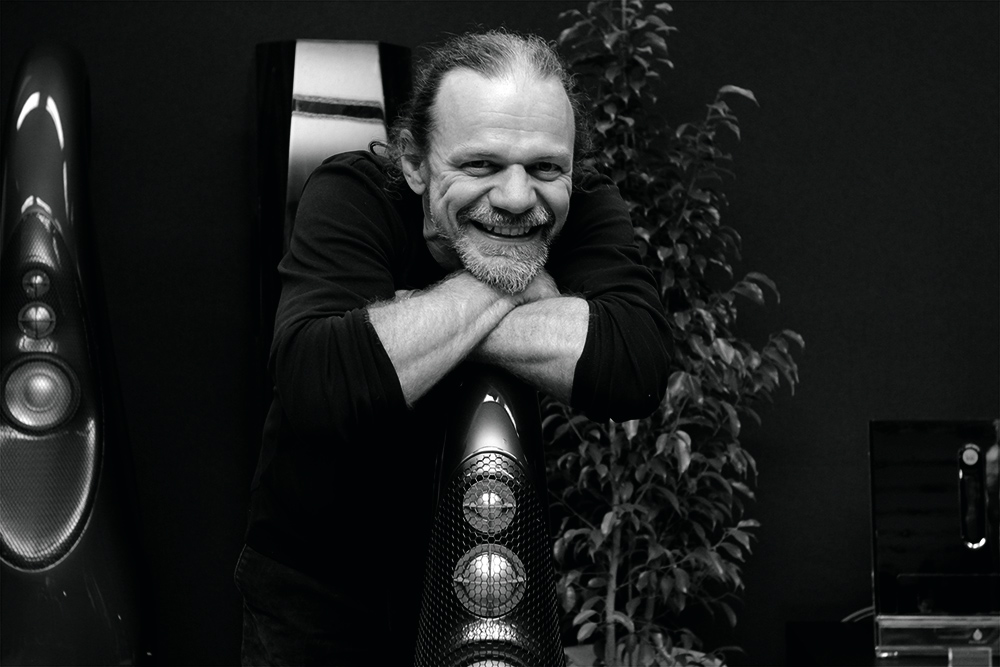 Right now my favorite finish is what they call Pearl, which is almost white, but with a subtle fleck and some depth to its sheen that looks nothing short of spectacular. It's what I'd get my speakers finished in if I were fortunate enough to be able to buy a pair of Giyas right now. I like their look, dig the colors, love the sound -- and admire the company's ability to follow what they believe is the right way, regardless of what anybody thinks.