Fun fact: about two thirds of Arcam's business is in the audio/video (home theater) arena. I had no idea. I also had no appreciation for the sheer complexity that is a properly executed audio/video receiver (AVR). I suppose it's because wandering into any big-box electronics store, you'll see a multitude of them from a variety of manufacturers, and none of them cost very much. 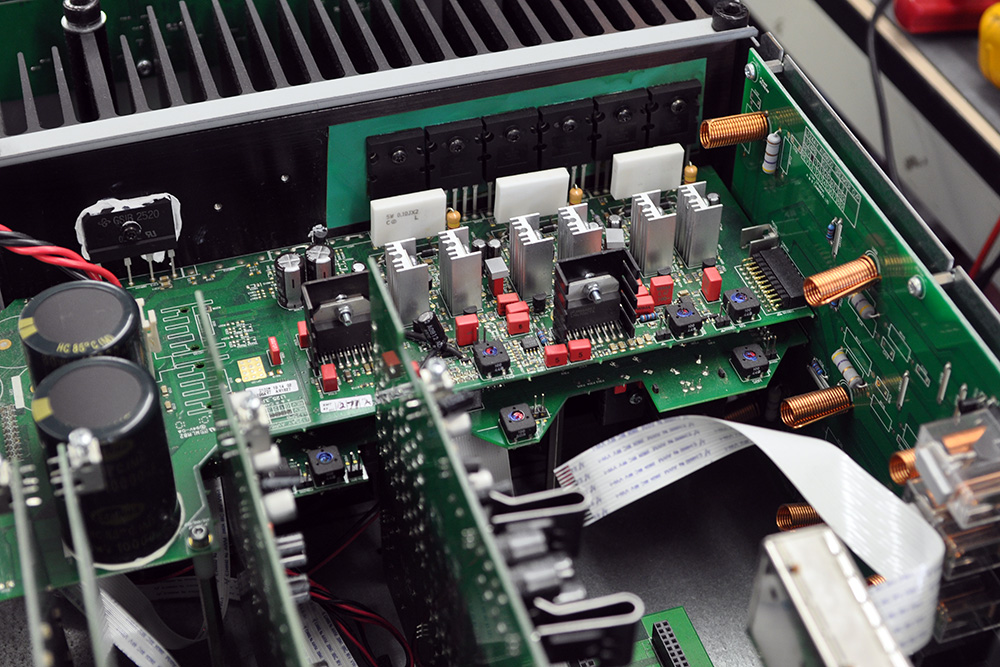 In reality, it's a total nightmare from an engineer's perspective. A single full-size component houses a giant power supply feeding up to seven channels of amplification, a preamp, and a processor. The "quiet world" of amps and preamps, as product manager Andy Moore explained, is fundamentally at odds with the "loud world" of digital signal processing. Clever packaging and isolation are deeply important in these kinds of applications.

Arcam has three AVRs: the entry-level AVR380, the AVR450, and the flagship AVR750. Moore kindly demoed the latter two for me. The two amps share exactly the same hardware, short of the power supply. The $3500 AVR450 uses a class-AB amplifier generating 90Wpc with all seven channels driven. It has the expected raft of digital-video connectivity, but it also has a great deal of audio-specific functionality. Inputs included four coaxial, two TosLink, one USB, Ethernet . . . plenty, really. 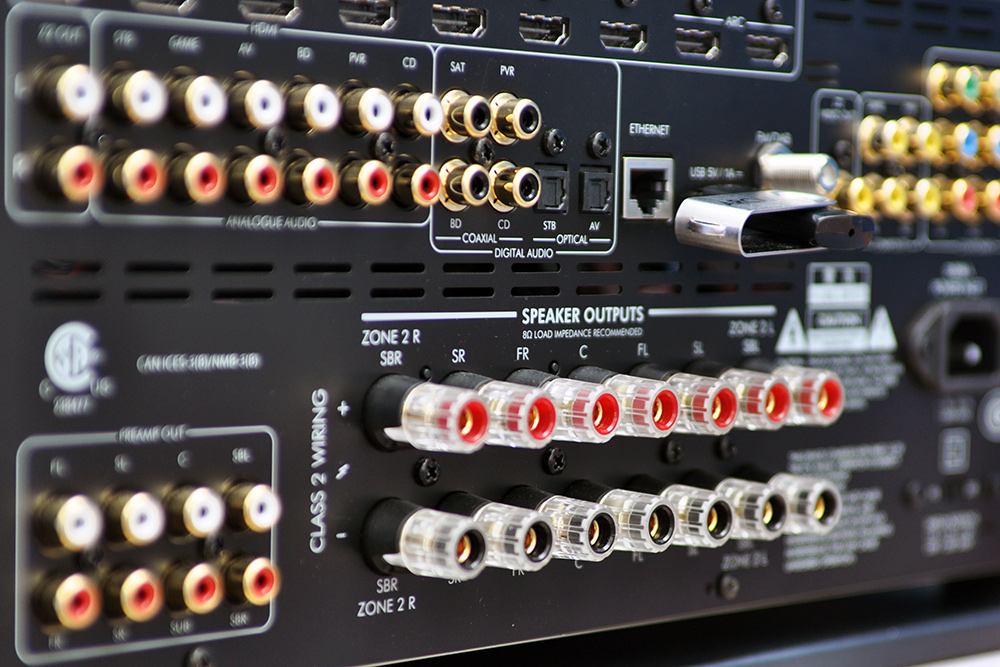 While I was expecting exclusively movie demonstrations with the two AVRs, Moore demurred. "We have 16 years of experience making AVRs, and our focus, as with everything else we do, is on audio performance." On went one of Joe Bonamassa's concert Blu-rays. The guitarist learned from BB King, whom he met at his father's guitar store in Los Angeles. Even through $550 Q Acoustics loudspeakers, the concert was riveting, with the rapid finger work of Bonamassa not lost in translation from disc to listening chair. To my ears, the sound quality was as good as the company's A19 integrated that I have been listening to with Arcam's digital-to-analog converters. For a seven-channel unit, that would seem to more than justify the AVR450's asking price. 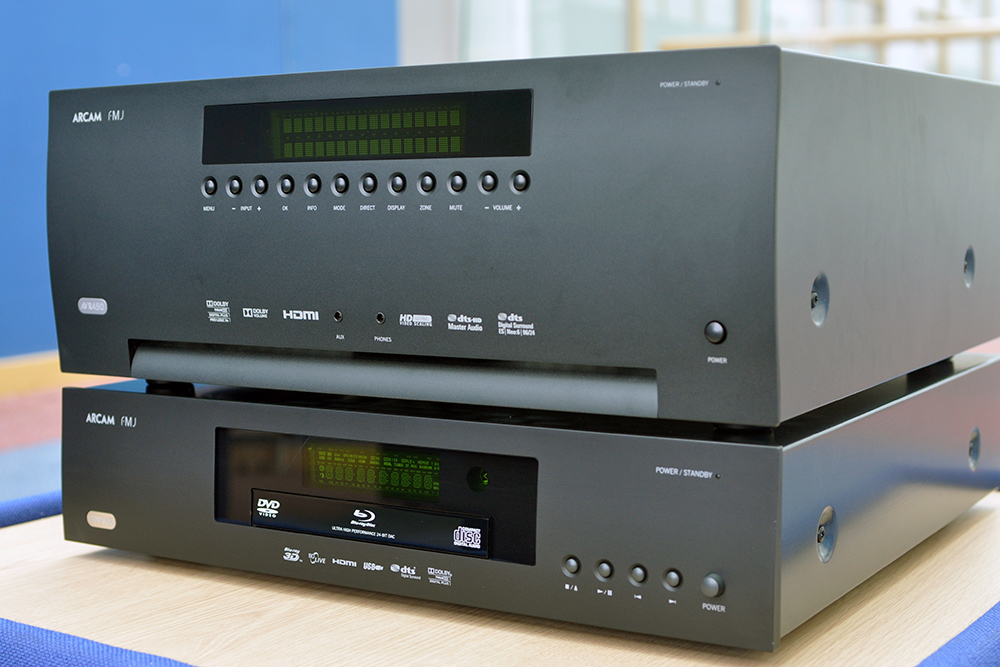 So when the AVR450 and AVR750 are identical, short of the amplifier section's power supply, how is the $2500 premium for the $6000 flagship product justified? I was skeptical. Forgoing the dreadfully common class-AB topology, Arcam elected to use a class-G amplifier. G stands for gimmick, I thought. Or garbage? Obviously if I've never heard of a hi-fi product using class-G topology, it was no good.

Moore explained via a whiteboard -- not kidding -- that class-G makes use of additional power rails beyond a traditional class-AB design, and these operate at higher voltage than the base rails. This permits class-G amps to be more efficient than class-AB (though not quite to the level of class-D). It's not just for efficiency's sake that Arcam chose to explore this relatively obscure circuit architecture, however. The first 22W of the amp's 100Wpc into seven driven channels are pure class-A. This allows crossover distortion, a scourge of class-AB designs, to be avoided, while simultaneously offering listeners the coveted qualities of class-A circuitry. Since the large majority of listening will require less than 22Wpc, after which point the additional power rails kick in for class-AB operation, the AVR750 is functionally a class-A AVR.

How does it sound? Glorious. Maybe that's what the G stands for. Again, the demonstration used $550 speakers, but the improvement was instantly noticeable, and quite substantial. On went a Cream concert on Blu-ray, and my -- there were wild dynamic swings portrayed with total effortlessness. There was no compression, no distortion, only this expansive, thoroughly transparent sound on offer. I can't say how it compared to dedicated stereo hi-fi gear from the industry's bigger names, but I'll just say it sounded very good, and not just for an AVR. If this is class-G in its infancy, I can't wait to hear it as it matures. 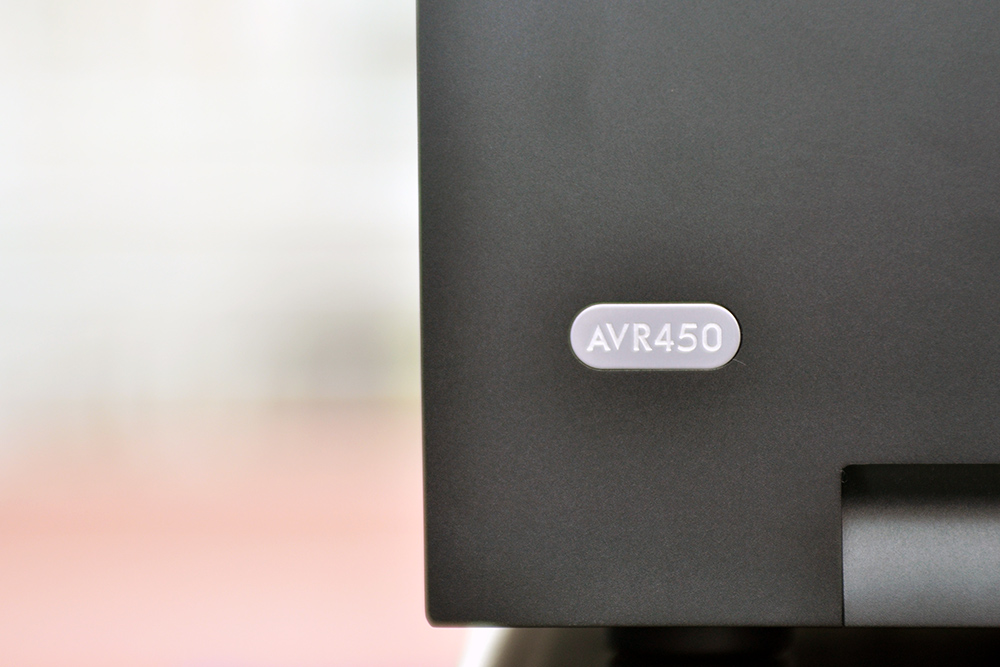 Impressed by the AVR450, and pretty floored by the AVR750, I wasn't expecting to make mention of anything else until I realized that Moore had been controlling both with his Apple iPad Mini. Apparently, Arcam has a dedicated iPad application that can operate in concert with all three of its AVRs. It's not basic, either, hiding a goodly amount of control, including input selection, audio-mode selection, and video adjustments. Sheesh. When Arcam does something, it does it right, and their latest AVRs -- the AVR750 in particular -- are a delight to listen to.