How Well Do the Apple AirPods Max Headphones Measure?

The launch of the Apple AirPods Max on December 8 caused the biggest stir about a set of headphones that I’ve ever seen—partly because they’re the over-ear version of the hyper-popular Apple AirPods Pro earphones, partly because they look so different from anything else on the market, and partly because they’re from Apple. I don’t normally review big-hype, mass-market products like the AirPods Max headphones, but considering that they’re a radical design packed with advanced signal processing, I knew I couldn’t call myself an informed reviewer if I hadn’t spent some time with them.

As a reviewer whose work targets technically oriented audiophiles, I’d say I’m on Apple’s C-list when it comes to review samples—except that I’m probably not on any list at Apple. However, for the price of a couple of Total Wine & More gift cards, I was able to borrow the AirPods Max ’phones for a few hours from a friend who’d ordered them within minutes of the announcement. Fast as I could, I ran home to run some measurements on them and give them a quick listen before I had to return them.

I’ll start with the measurements, since there are probably 100 subjective reviews you can read where dudes pretty much give the same opinions about how these headphones sound, feel, look, and whatever. 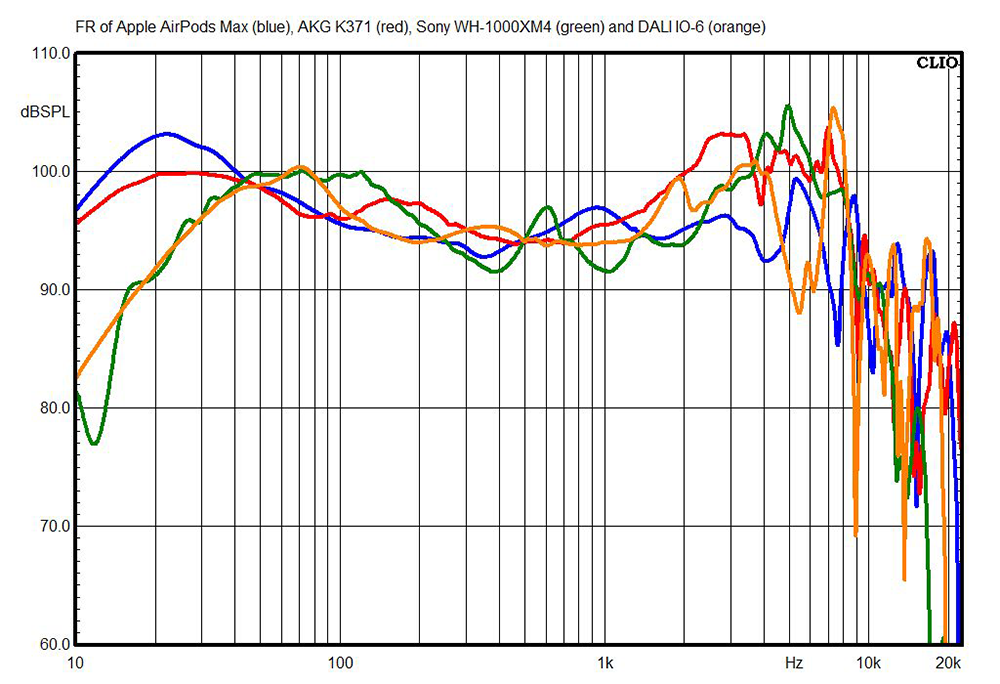 It’s obvious that the AirPods Max ’phones are a little different. Specifically, the response tilts up in the bass and down in the treble, suggesting that they’ll sound a little fat in the bass and a little soft in the high frequencies. They also lack the big peak around 2 or 3kHz that most of today’s better headphones have, and they have a bit of a push in the middle of the midrange, around 1kHz.

I did this measurement with the same laboratory-grade rig I use for my SoundStage! Solo measurements: a GRAS Model 43AG ear/cheek simulator, with an RA0402 ear simulator/coupler and KB5000/KB5001 simulated pinnae, connected to an Audiomatica Clio 10 FW audio analyzer. 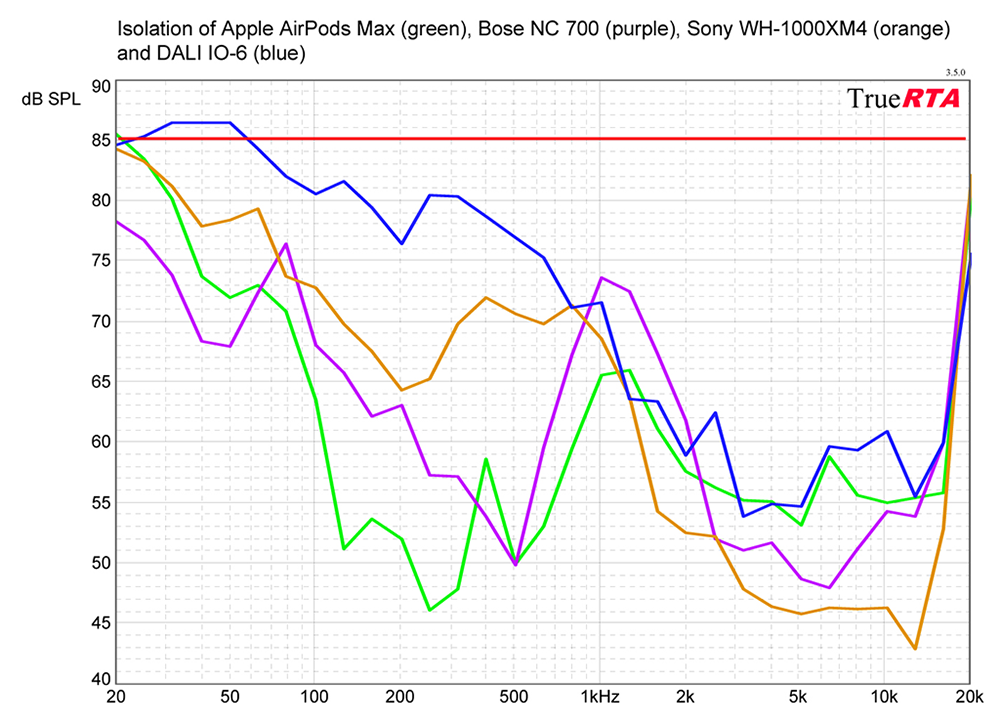 The chart above shows how the AirPods Max headphones’ noise canceling compares to the current heavy hitters in this category: the Bose NC 700 and the Sony WH-1000XM4 headphones. (Plus, I threw in the DALI IO-6 headphones to give an example of a fairly typical set of noise-canceling cans.) The Bose and Sony models were set for maximum noise canceling. The AirPods Max headphones have only three noise-canceling settings: Off, Active Noise Cancellation, and Transparency, which lets outside sounds in through the headphones’ external microphones. I wouldn’t have believed this result, except that I was wearing the Maxes when I was firing up the six speakers plus a subwoofer that I use to generate noise for this test, and from what I heard, I assumed that I’d forgotten to plug the subwoofer in. But when I looked, I saw the subwoofer’s driver pumping furiously back and forth yet emitting no sound I could hear.

Anyway, this is an outstanding result, and it’s especially good in the “airplane band”—the region between 100Hz and 1kHz, where most jet airliner cabin noise resides. I think this is probably the most effective noise canceling I’ve experienced, although I did note a bit of eardrum suck as I was listening. It’s worth noting that Apple’s design uses four external microphones (for feed-forward noise canceling) and two internal microphones (for feedback noise canceling), as well as sophisticated digital signal processing to get the maximum noise-canceling effect for whatever situation the listener is in. 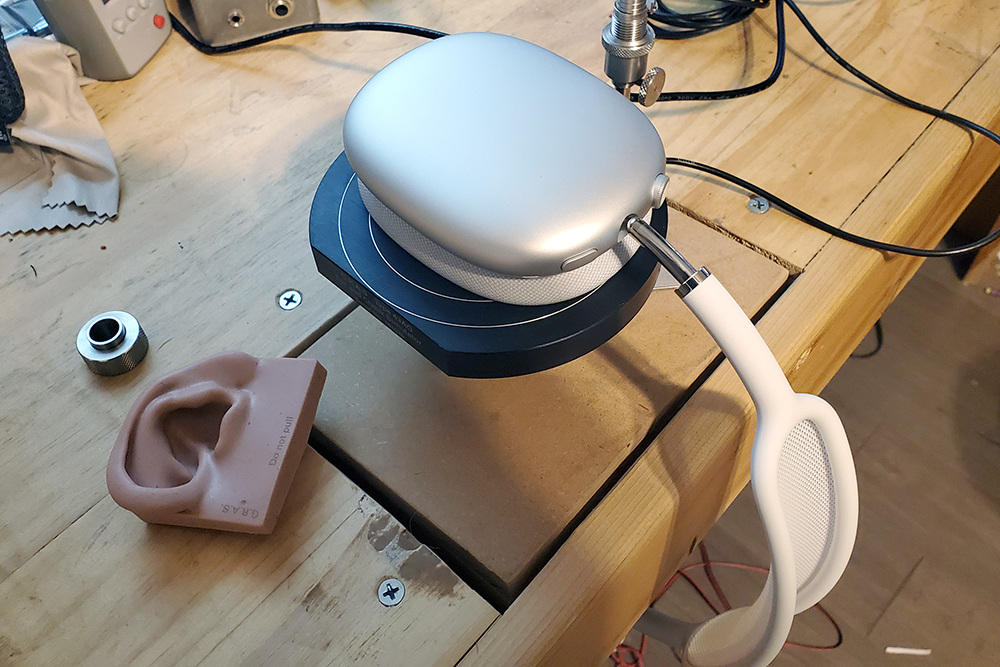 I also did distortion and spectral-decay (waterfall) measurements, but found nothing interesting. There’s only a small amount of distortion (about 4% max) even at the extremely high listening level of 100dBA, measured with pink noise. The spectral decay measurement shows a bit of resonance in the bass, below 300Hz—something most of the headphones I measure show to some degree—and no noteworthy resonances above that.

Bluetooth latency, measured through an MPOW BH259A Bluetooth transmitter, was consistent at 172ms, which is fairly average for Bluetooth, and could be enough for you to notice a bit of lip-sync error. Apple includes only the SBC and AAC codecs; there are no low-latency options such as aptX Low Latency.

I had time to play many of my favorite test tracks through the Max headphones, and to compare them with the Bose NC 700s, which I happen to like a lot. I did my listening before I did the frequency-response measurements, so my measurements didn’t bias me—but as it turned out, the AirPods Maxes sound like they measure. By and large, I’d say that these headphones sound pretty good. Not surprisingly, I prefer higher-end models such as the Dan Clark Æon 2 Closeds and the Beyerdynamic T5s, and there are less pricey models I like better, such as the Bose NC 700s and the AKG K371s. But overall, I enjoyed listening to the Max headphones.

I’d describe their tonal balance as “a little soft in the treble and a little mushy in the bass.” On Holly Cole’s version of “Train Song” (Temptation, 320kbps Ogg Vorbis, Capitol/Spotify), the double bass was elevated in level, and it didn’t sound as well-defined through the AirPods Maxes as it did through the Bose NC 700s; I couldn’t hear the pluck and upper harmonics of the strings as well. I also couldn’t hear the tune’s hyperactive percussion instruments as clearly through the AirPods Maxes. But Cole’s voice sounded wonderfully clear—probably because of that peak in the midrange around 1kHz, I would guess.

Tracy Chapman’s “Fast Car” (Tracy Chapman, 320kbps Ogg Vorbis, Epic/Spotify) also sounded too bassy, and Chapman’s voice was a little more sibilant than it was through the NC 700s. But still, while it wasn’t what I’d call “audiophile-grade sound,” it was nice to listen to—probably because between about 300Hz and 5kHz, the response sounded even and I didn’t hear major colorations. 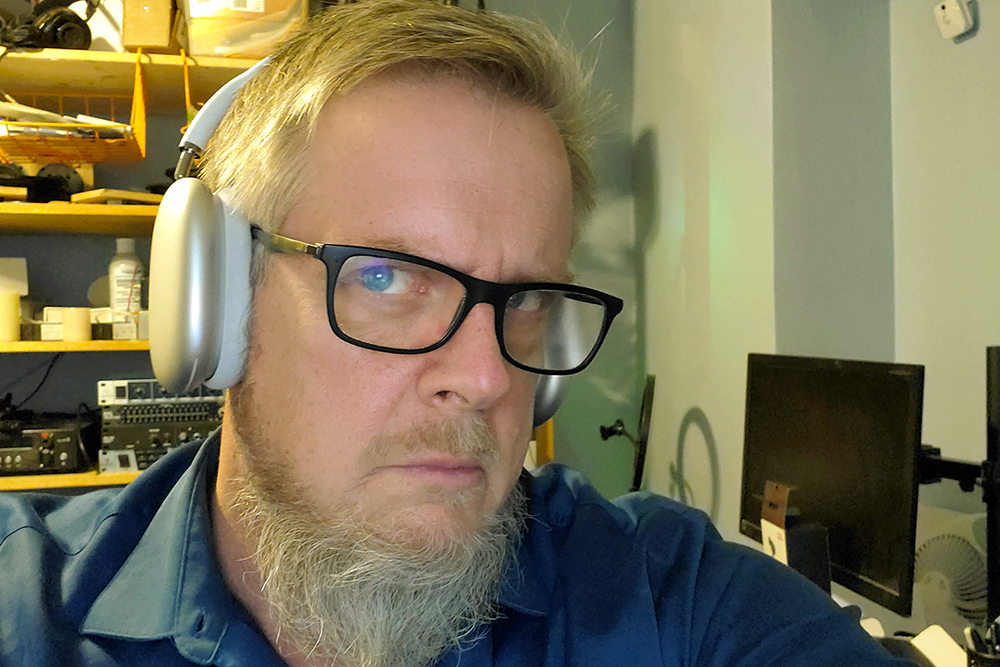 Apple included a feature that automatically equalizes the sound to compensate for any leaks around the earpads. I didn’t have a chance to test this in depth, but I did try pulling one earpad away from my head by about 1/4″, and I could hear the bass being boosted to compensate for the leak. The Maxes also have a head tracking feature that pans movie dialogue left or right automatically as you turn your head, so dialogue always seems to come from the screen. In the few minutes I had to try it, this feature worked amazingly well, although I don’t see much benefit to it unless you’re watching on a big screen.

Overall, I’d strongly advise ignoring reviewers who say these headphones are great, and I’d just as strongly advise ignoring reviewers who say they suck. They sound pretty good, and they have fantastic noise canceling plus a cool design. I’d liken them to a Tesla automobile. They’re not the highest-performance option available, and they’re certainly not the best bargain out there, but they are well-designed, refreshingly different, and just plain cool. I’m not tempted to buy a pair, but I’d recommend them to well-heeled business travelers, and I’m glad I got a chance to give them a spin.