Tweaking a Power Plug with Furutech

We audiophiles are a compulsive, persnickety bunch. We fuss, fiddle, tweak, adjust, calibrate, measure, tinker, and toil -- all to achieve the highest quality of sound reproduction possible. A generation ago, this obsession with getting everything just right was pretty much limited to the equipment itself. Most components came with captive or detachable power cords, the sufficiency of which was seldom questioned. Interconnects and speaker cables were also fairly basic affairs -- rarely did audiophiles feel the need to experiment with replacements. Then something happened: Early makers of cables -- e.g., Monster Cable, Cobra, Vampire Wire -- set out to convince us that wires could alter the sound of an audio system.

One day in the mid-1980s, my father brought home a bag from the local audio dealer. “Don’t tell Mom,” he said to me in hushed tones, “but these cost $8 a foot!” Then, with the eager anticipation of a kid unwrapping his first Radio Flyer wagon, he drew from the bag some thick, relatively unwieldy speaker cables from Monster Cable, and proceeded to connect them to his Polk Audio 5B speakers.

My father and I had had many conversations about psychoacoustics and the science of sound reproduction -- I knew he was no fool. Still, as he tried to repeat to me the pitch the salesman had given him an hour before, I stood there in stunned disbelief, slack-jawed that he’d allowed himself to be hustled by some snake-oil salesman to spend well over $100 on wires.

He finished hooking up the Monsters, we fired up his Marantz integrated amp, and . . . voilà. I was listening. He was listening. Wondering if I actually heard any difference, I looked at my father for his reaction. As I recall, we agreed that the sound had improved -- but neither was ready to proclaim that we’d suddenly found religion. Nonetheless, from that day forward we bought expensive wires. And so it began.

The fact that today I write reviews for the SoundStage! Network, and that you’re reading this, strongly indicates that many of us now believe -- know -- that wires can make significant differences in the sound of an audio system. This has been a blessing and a curse. While it’s great that we can improve the sound of a system in this way, there seems to be no end to it. You can spend far more on cables than on the components themselves. A full loom of the speaker cables and interconnects needed to link all components of a system of high-end separates -- a full loom, as we call it -- can run into six figures.

Nor are speaker cables and interconnects the whole story. Years after many of us had dipped a toe in the apparently bottomless pool of cables, manufacturers revealed that the stock power cords we’d been using had also been inhibiting the full potential of our systems. Another opportunity to spend wads of cash on yet another tweak.

A well-heeled friend of mine has assembled one of the finest audio systems I’ve ever heard. The total cost of his rig, which includes some very expensive interconnects and speaker cables, exceeds $300,000. A few years ago, as we sat in his listening room, hearing some music and enjoying some primo vino from his cellar, I asked why he had no “decent” power cords. He shot me a look that was partly that of a crestfallen child who’d just been told that his shiny new bike had a cheap bell, but mostly that look was one of skepticism: “The Romex power lines to my home run 100 miles! How the hell can the last six feet from the wall make any damn difference?!”

Most of us have asked ourselves that question. And yet, a couple months ago, this same friend gleefully told me that he’d recently installed some nice power cords in his system, and the result had “transformed” its sound. I then asked him if he’d experimented with grounding devices. And another Pandora’s box was flung open.

Which brings me to my point: The menu of tweaks, accessories, cable upgrades, auxiliary devices, etc., to choose from is endless. Some of these products can bring improvements in the sound; some, not so much. And, of course, their effects, if any, are highly system-dependent, the various interactions between specific components and specific cables being unpredictable. Hence the excitement and the madness of this great hobby. 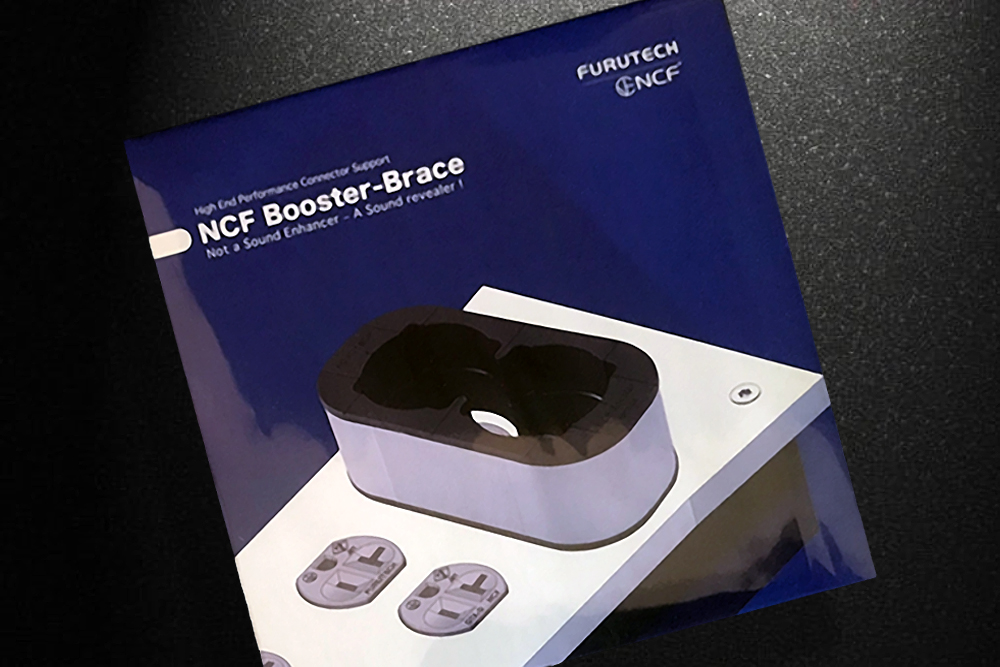 Recently, I received a parcel from Furutech Co. Ltd., a Japanese company. I opened the shipping carton, but after staring at the product’s own packaging, I still had no idea what it was. Only a thorough examination of the scant instructions gave me a clue as to what this thing was supposed to do. (Fair warning: If you don’t believe that power cords can change the sound of an audio system, there’s no need to read further; what I’m about to tell you goes a good ways beyond that.)

Furutech’s NCF Booster-Brace ($235, two-outlet version; $175, single-outlet version; all prices USD) is designed to improve the connection between a component’s power cord and your wall outlet. Essentially, it’s a cradle that attaches to the power receptacle, the cord’s blades then snugly fitting within, to create a tighter grip and, thus, better contact with the wall outlet. The NCF Booster-Brace provides a cradle or sheath for the entire connector, and thus relieves the pressure of the connector’s blades on the inlet’s or outlet’s internal flanges, into which the blades are inserted. The blades thus have an optimal, straight-in connection with the flanges because they’re not being dragged down by gravity: the mass, and thus downward force, of connector and cord. According to Furutech, the Booster-Brace takes things even further, through use of their Nano Crystal Formula (NCF). Furutech discovered that the application of certain crystals in materials improves sound reproduction. “These aren’t magic crystals, mind you,” they explain, “but a new crystallized material that actively generates negative ions to eliminate static and converts thermal energy into infra-red. There is nothing mysterious about the way these crystals work -- quite simply, they improve audible performance in a very specific and measurable way.” Furutech uses NCF in other products, including their power receptacles, cables, connectors, and some other accessories. 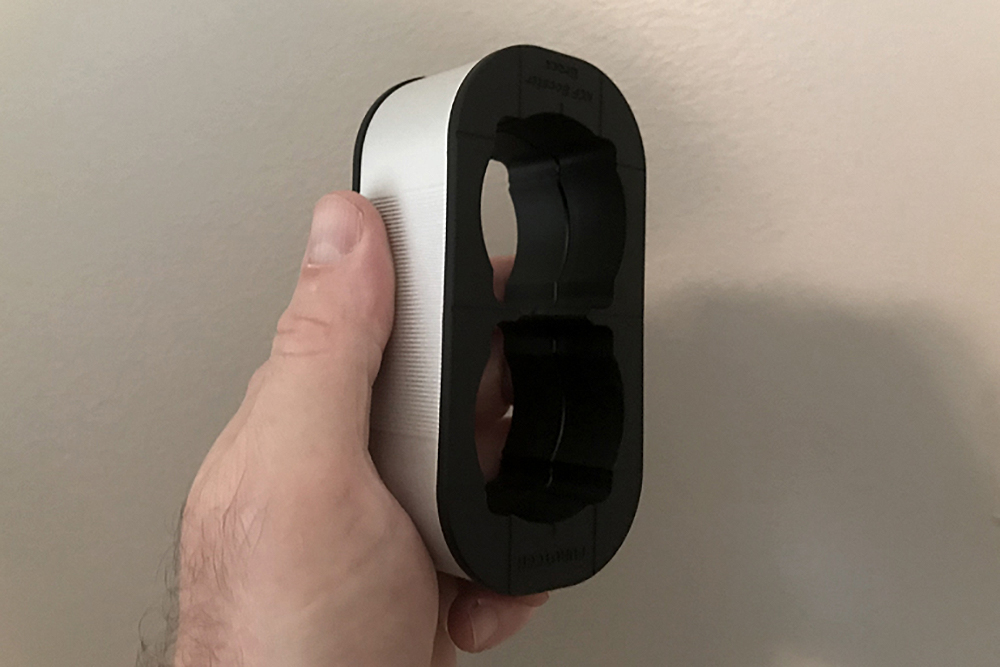 Furutech contends that a firmer connection between power cord and wall outlet suppresses surface vibrations, eliminates resonances, and generally provides more contact between blade and receptacle. In theory, this makes perfect sense; after all, how could a snugger electrical contact not be better? And in terms of fire hazard and general safety, there’s some comfort in knowing that the power cord is making as solid a contact as possible with the wall. I am neither a physicist nor a materials-science engineer, so Furutech’s claims about the effects of NCF are out of my bailiwick -- but the technology is intriguing.

Installation of the NCF Booster-Brace is a relatively straightforward process that takes only a few minutes. A template is provided to align the Brace with the wall outlet, to ensure a perfect fit. The brace then becomes an extension of the outlet. The Mark Levinson 33H mono power amplifiers in my reference system have very heavy-duty captive power cords -- thus depriving me of the dubious privilege of buying two more expensive aftermarket cords -- whose connectors are too big to fit into the standard-size bracket. All of my other components are plugged into a Reimyo ALS-777 AC line stabilizer, so I had only one power plug to connect directly to the wall outlet. That’s what I did. 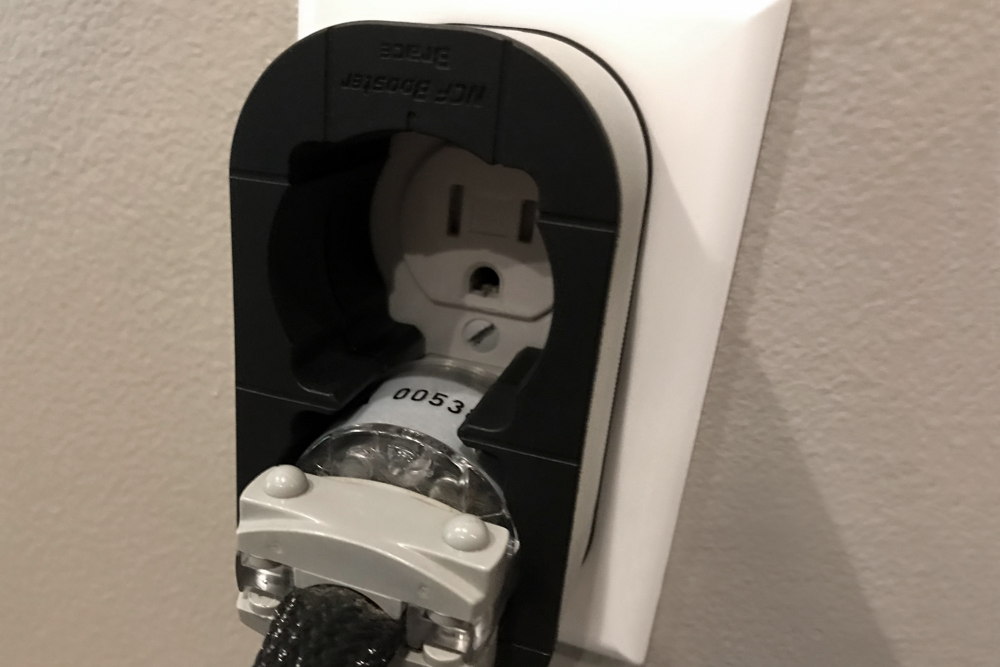 Plugging the Reimyo into the NFC Booster-Brace yielded subtle improvements, particularly at the frequency extremes. Bass had a bit more texture and solidity, the top end noticeably more sparkle. Overall, soundstages were slightly deeper, though not necessarily wider. These were not dramatic improvements, but my system is already highly resolving -- even subtle improvements, especially from such a relatively inexpensive tweak, are significant.

The improvement was akin to moving up a level in a manufacturer’s power-cable line, or perhaps upgrading to better connectors -- which is essentially what is occurring. I suspect that the amount of improvement offered by the NFC Booster-Brace will be highly dependent on the system it’s used in, and will largely be a function of the quality and number of power cords and plugs. Like many audio manufacturers, Furutech claims that the audible effects of its products are cumulative: Use multiple products from their NCF line in the same system to produce more compelling improvements in sound. That claim could be the subject of a follow-up blog -- it would be interesting to hear the effects of daisy-chaining these interesting products. 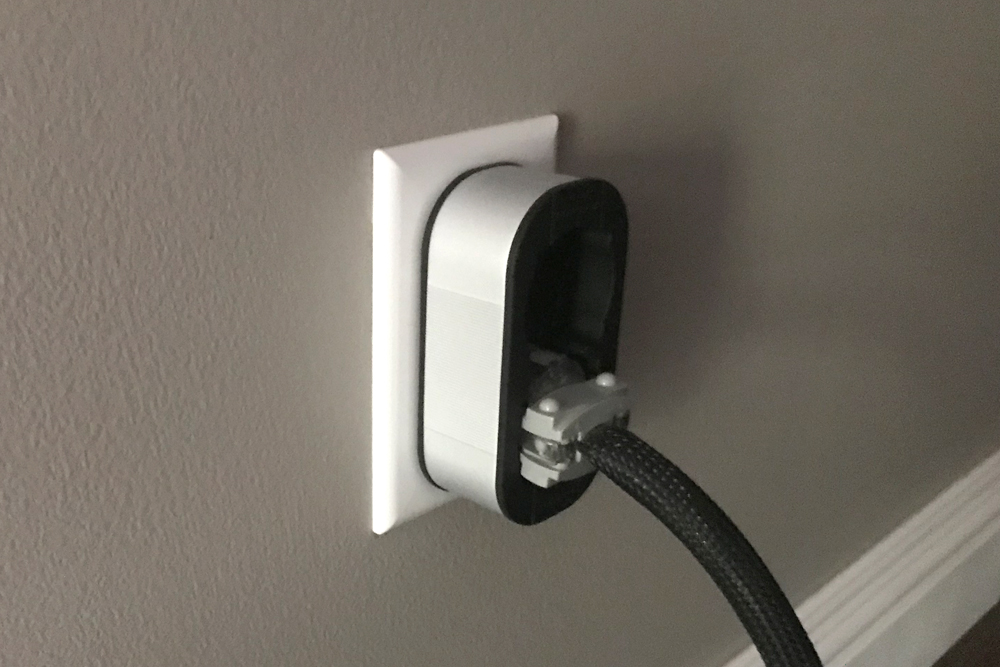 Although my system may not be as optimal as other rigs for the use of these devices -- I had only one outlet to add a double NCF Booster-Brace to -- a price of only $299 makes it easy for me to recommend using one or more in your system. I’ve spent far more on products that have made smaller improvements in the sound of my system.

Now to convince my well-heeled buddy that he should have these, too . . .